The Science and People Behind Nike NEXT% 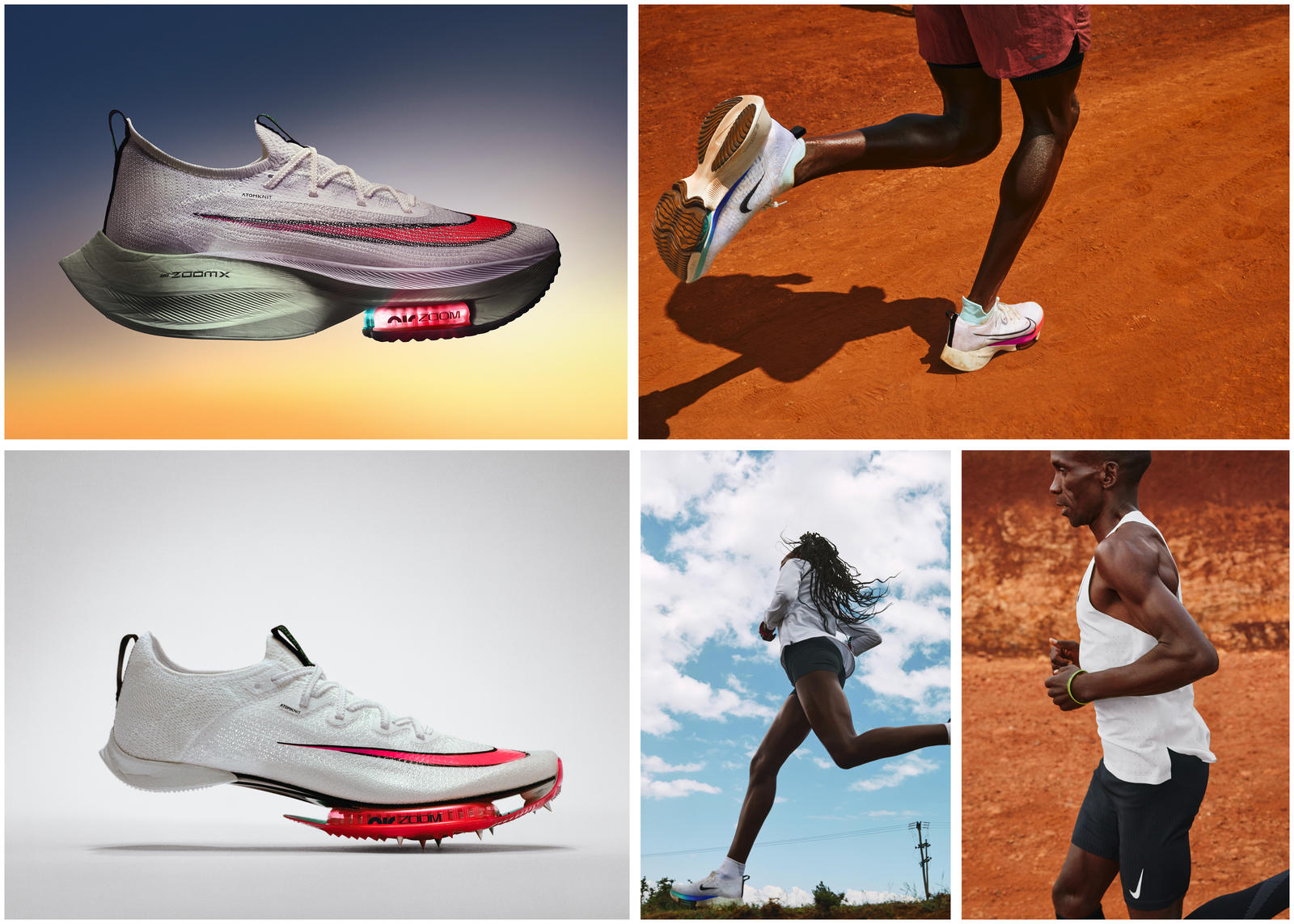 Barometers of progress abound in running. Thresholds like the 10-second 100-meter dash, four-minute mile and two-hour marathon captivate athletes and fans alike. Once one barrier falls, a new benchmark is set and with it, a new aim for marking human potential.

For Nike, Breaking2 in 2017 unveiled a new approach to footwear design, a synergy between sport science, engineering and athlete which, highlighted by the Nike Zoom Vaporfly 4%, defined an industry-leading approach to improving running economy. Rather than a one-off experiment, the work kick-started an iterative design program resulting in a pioneering system informed by sport science and verified by the Nike Sport Research Lab: Nike NEXT%.

Long-distance efforts remain most tied to the Nike NEXT% program — Eliud Kipchoge broke the two-hour barrier in a prototype of the Nike Air Zoom Alphafly NEXT%. However, the introduction of training shoes, with the Nike Air Zoom Tempo NEXT% and sprint and middle-distance spikes, affirm Nike’s commitment to breaking new barriers and underscore the value of NEXT% principles across disciplines.

What follows is a behind-the-scenes look at teams pushing NEXT% forward — inch-by-inch, second-by-second — as told by the athletes, designers, engineers and scientists who make it possible.

The Roots of NEXT%

Making athletes better has been central to Nike’s foundation since its founding. But the idea of making athletes measurably better was seeded in 2013.

“We started to bring together lots of the concepts about how to make athletes more efficient on race day," says Tony Bignell, VP, Footwear Innovation. "That took many years of research and development and eventually, in 2017, culminated in the Breaking2 event." 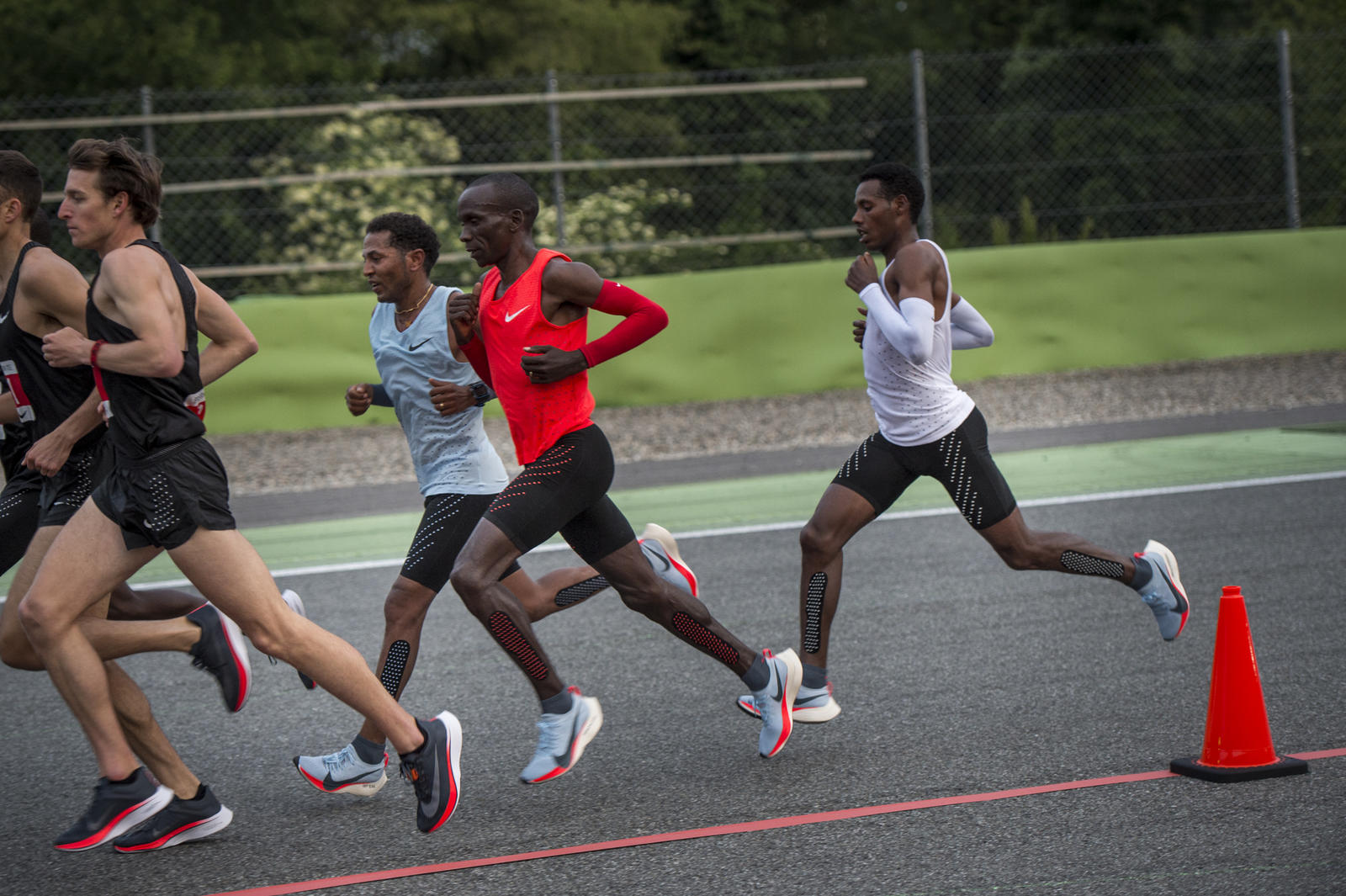 Eliud Kipchoge debuting the Nike VaporFly 4% during the Breaking2 event in Monza, Italy.

“We started to bring together lots of the concepts about how to make athletes more efficient on race day."

Run on a speedway in Monza, Italy, Breaking2 debuted the Nike VaporFly 4%, a pioneering running shoe worn by Eliud Kipchoge, Lelisa Desisa and Zersenay Tadese, born from deep scientific research into the limits of athletic potential, and how footwear can affect running efficiency. This includes baseline assessments, consideration of material elements, such as cushioning, and highly technical physical capacity like critical velocity.

“We look at variables related to a runners' stride, impact and heart rate to understand how footwear affects their performance. The longer you run above your threshold, the more quickly you're going to deplete your energy source,” explains Matthew Nurse, VP, NXT Sport Research Lab. “We can measure an athlete's oxygen consumption to understand their running efficiency (RE), and their maximum aerobic capacity (VO2max). This helps us understand capacity and efficiency. Think about it as the size of your gas tank, and the miles per gallon you get out of that gas tank. In our research, we want to understand what that threshold is for how fast you're going to deplete, or replenish, your reserves.”

The idea is that if you can help keep the reserves up, an athlete can go longer and faster. The solution is far more complex.

Time — as expressed in world records and major barriers — is a relatively easy way to understand running standards.

“In the U.S. we can all relate to the mile, because we did it in high school,” says 2016 1500-meter gold medalist Matt Centrowitz. “It's one of the three signature events with the marathon and the 100."

The events aren’t just signature distances. The barrier times (10 seconds, four minutes and two hours) are historically barometers of human potential. However, getting to grips with the nuances of other events is crucial to the NEXT% promise.

Consider Centrowitz’s signature event, the 1500 meters. The race is a mix of speed and endurance. Or as he explains, “It's not just like the 100 where it's right from the gun. You might find yourself running fast early on and then slow it down or vice versa.”

Laura Muir is a British middle-distance runner. For her, the peculiarities of the 1500 give it an undeniable drama. “It's an event where you've got a mix of lots of different abilities. Some of the people will come from 800, 1500 background, and some people will come from up to 5K background,” says Muir. “It's probably the only track event where the times that people run in the major championships can be far, far from what they're capable of.” 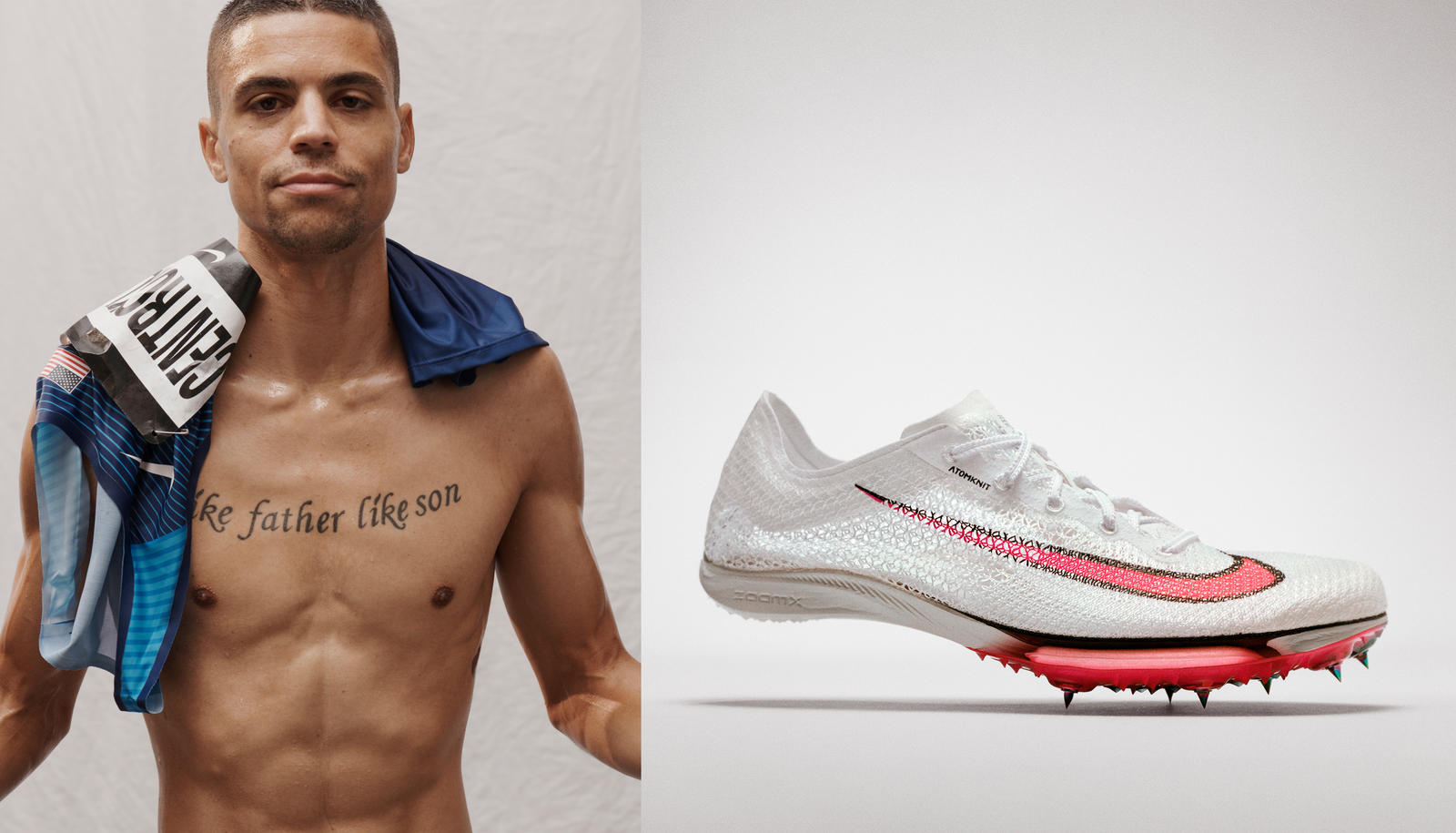 “In the U.S. we can all relate to the mile, because we did it in high school.  It's one of the three signature events with the marathon and the 100."

Speed in the distance is tied to strategy — the middle stages are critical for sorting how the final push will play out. Go out too quickly, one might get tired and fall behind an endurance specialist; go too slowly, a faster finisher may be favored to cross the line first.

“Different people are good at different things for how the race is run,” says Muir.

Strategy also defines success in events like the 400-meter hurdles, where pure sprint speed (like in the 200) must be matched by an 800-meter runner’s endurance distance and a jumper’s knack for timing.

“In the 400 hurdles, you definitely have to be fast. But I think there's so much more that goes into the 400 hurdles other than speed,” says world record holder Dalilah Muhammad. “Up into this year, I think I had probably the slowest 400 flat time out of all my competitors and was still able to come away with multiple victories. Sometimes speed can almost be a detriment when you're trying to set a perfect stride pattern.”

Individual goals cannot be achieved without a collective spirit. When Nurse and the Nike Sport Research Lab draw conclusions about cushioning, they know there’s a materials team beside them ready to put the same effort into their respective field of expertise. “The first step is just make sure we're in close enough proximity to have regular contact and a frequent intersection of ideas,” he says.

From there, creating a shared vernacular helps the merger of different sciences. “In the case of foam, we tried to understand what role compression, resiliency, energy return…all of these things play on performance. We want to be able to share with a materials team or footwear team, ‘If you meet these specs, you're going to have the best outcome for the athlete,’” says Nurse. 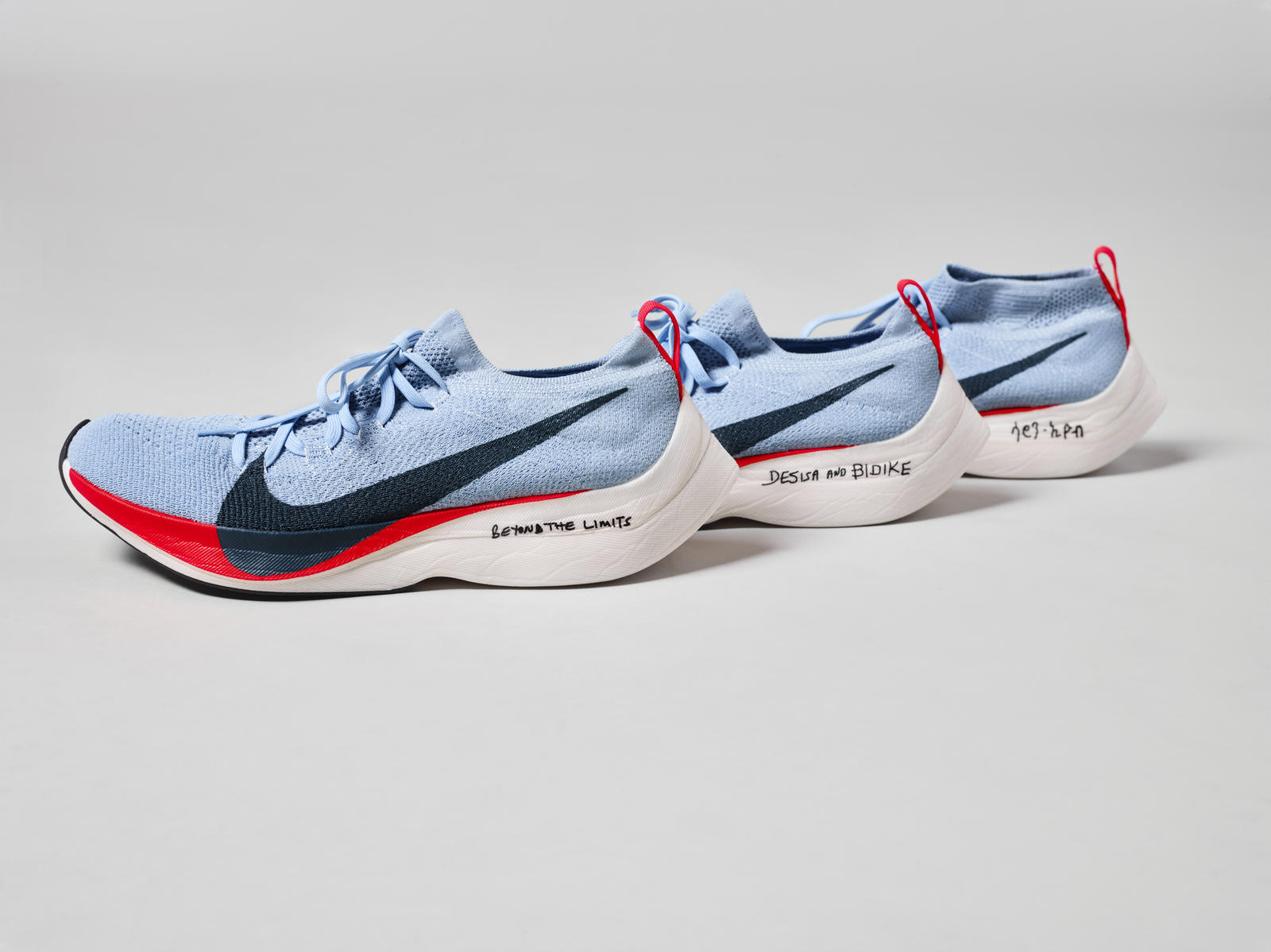 Custom-crafted for each athlete during Breaking2, the Nike Zoom Vaporfly Elite featured Nike ZoomX foam for responsive cushioning and a full-length carbon fiber plate to increase stiffness and provide a propulsion sensation.

“In the case of foam, we tried to understand what role compression, resiliency, energy return…all of these things play on performance."

The specs help define the NEXT% formula. But the scientific data doesn’t define the technologies to be used. Instead, it helps Nike designers and engineers push new boundaries. It helps make clear how interactions between stability, traction, cushioning and more influence what an athlete does in the shoe.

“The groundbreaking research that led to the original Vaporfly unlocked an entirely new way of thinking about marathon shoes,” says Carrie Dimoff, Senior Footwear Innovator. “Once we understood the plate and foam as a system, we started thinking about ways to make the system even more effective.”

From 2017 to 2020, experiments with Zoom Air yielded a series of prototypes (revealed by Kipchoge) and produced another significant leap forward in running shoe design.

“The combination of a really highly resilient foam and really responsive plate worked well with athlete’s strides and helped them spring into the next step,” says Dimoff. “When we added Zoom Air, the whole system advanced further, to an even better performing product.”

The system hasn’t just defined marathon shoes — its reworked expectations for equipment from sprinting to training. The eye is toward helping athletes like Centrowitz, Muir and Muhammad reach new potential. 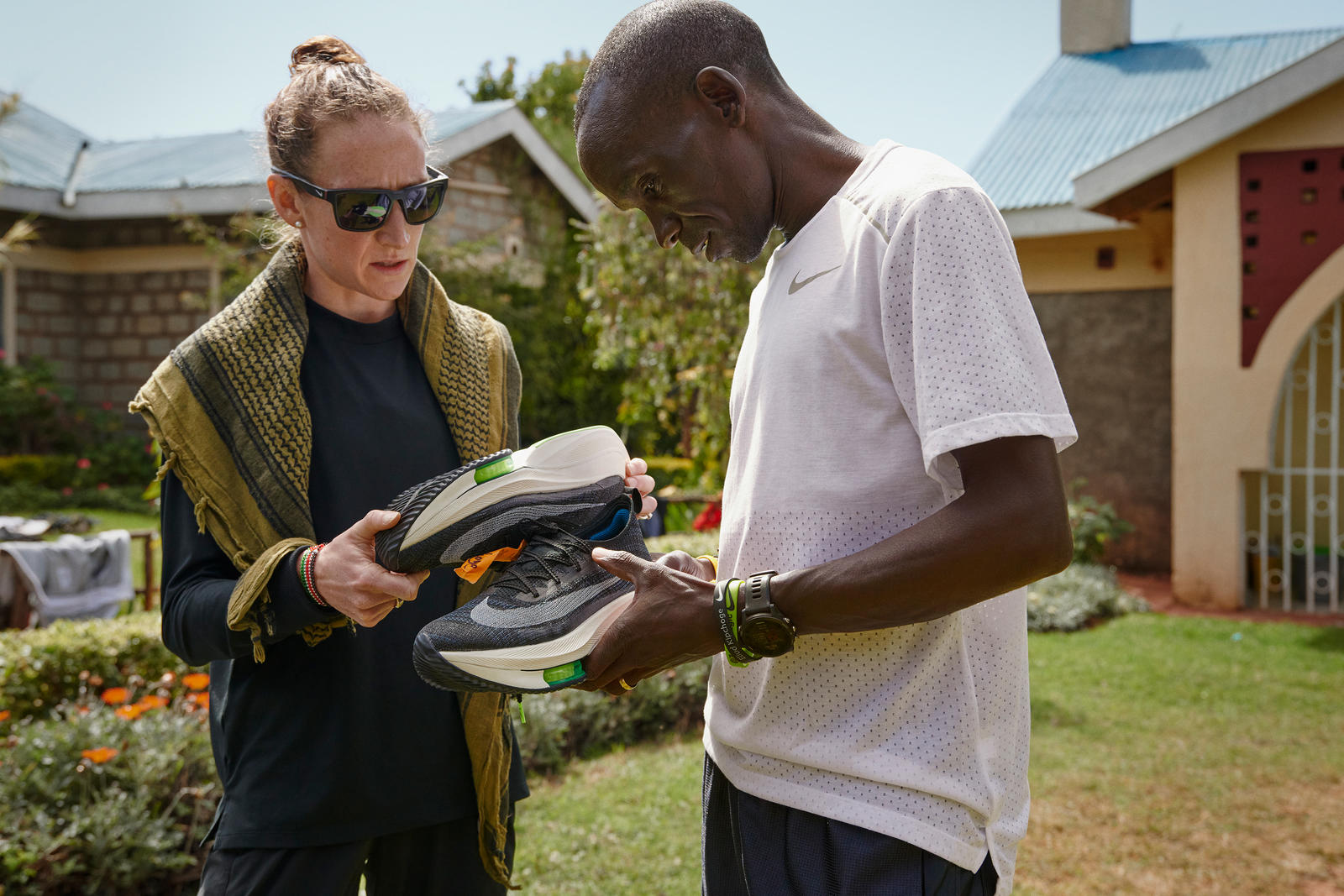 “The groundbreaking research that led to the original Vaporfly unlocked an entirely new way of thinking about marathon shoes.”

“An essential part of your body is, in a sense, the equipment, because that is what you're running with,” says Muir.

Extension of the body is where the design, engineering, materials, science and stride join forces. Get the equation correct and an athlete’s critical velocity is supercharged.

“It just puts you on the balls of your feet, into positions with your foot that you might need to put more of an effort into doing otherwise,” says Centrowitz of his latest first-choice footwear, the Nike Air Zoom Victory NEXT%.

In reducing effort required, the spike helps keep gas in the tank for the ebbs and flows of the 1500 — giving Centrowitz the combined physical and mental boost of elevated running economy.

Working with athletes like Centrowitz, Kipchoge, Muir and Muhammad, among other elites, has put Nike NEXT% firmly into the competitive landscape. And while time is connected to their goals, the nuances of each discipline remind of something more approachable for all runners: pace and endurance often define aims.

Bringing NEXT% engineering into training shoes, as with the Tempo NEXT%, is an early example of pushing measurable benefit away from the stopwatch. 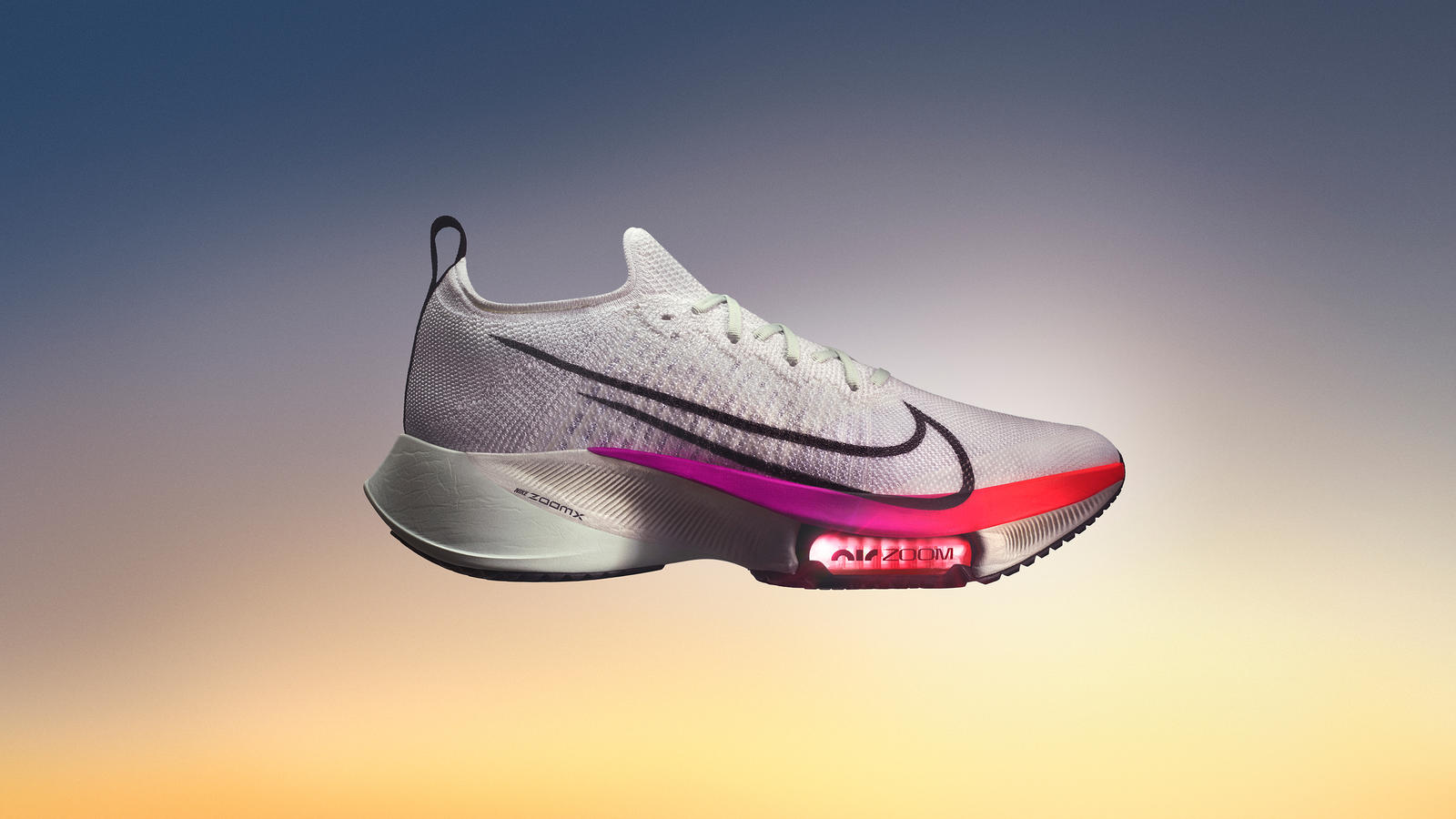 The Nike Tempo NEXT%

Bringing NEXT% engineering into training shoes, as with the Tempo NEXT%, is an early example of pushing measurable benefit away from the stopwatch.

“We used Nike React foam in the heel to provide more impact protection and durability, and we used a composite plate that is less stiff and designed for daily use," says Bignell. "Our goal with the Tempo was to help athletes get to the start line in a better, more effective way."

The shoe bridges the gap between those runners at the top of the performance pyramid and those who just want to reach a little further.

“Everybody who wants to get out and do something has their own challenges and their own definitions of better, and we need to understand them also if we want to serve a broad spectrum of athletes,” says Nurse.

In doing that, solutions emerge that may present a whole new range of measurable benefits. Faster times? Never-ending endurance? Sport without injury? Who knows. Or as Bignell puts it: “The best thing is to not put any limits on athletes."

The Hypervolt Flash Crimson Fast Family footwear, including Nike NEXT% models and the Nike Air Zoom Pegasus 37, is available this summer on nike.com.