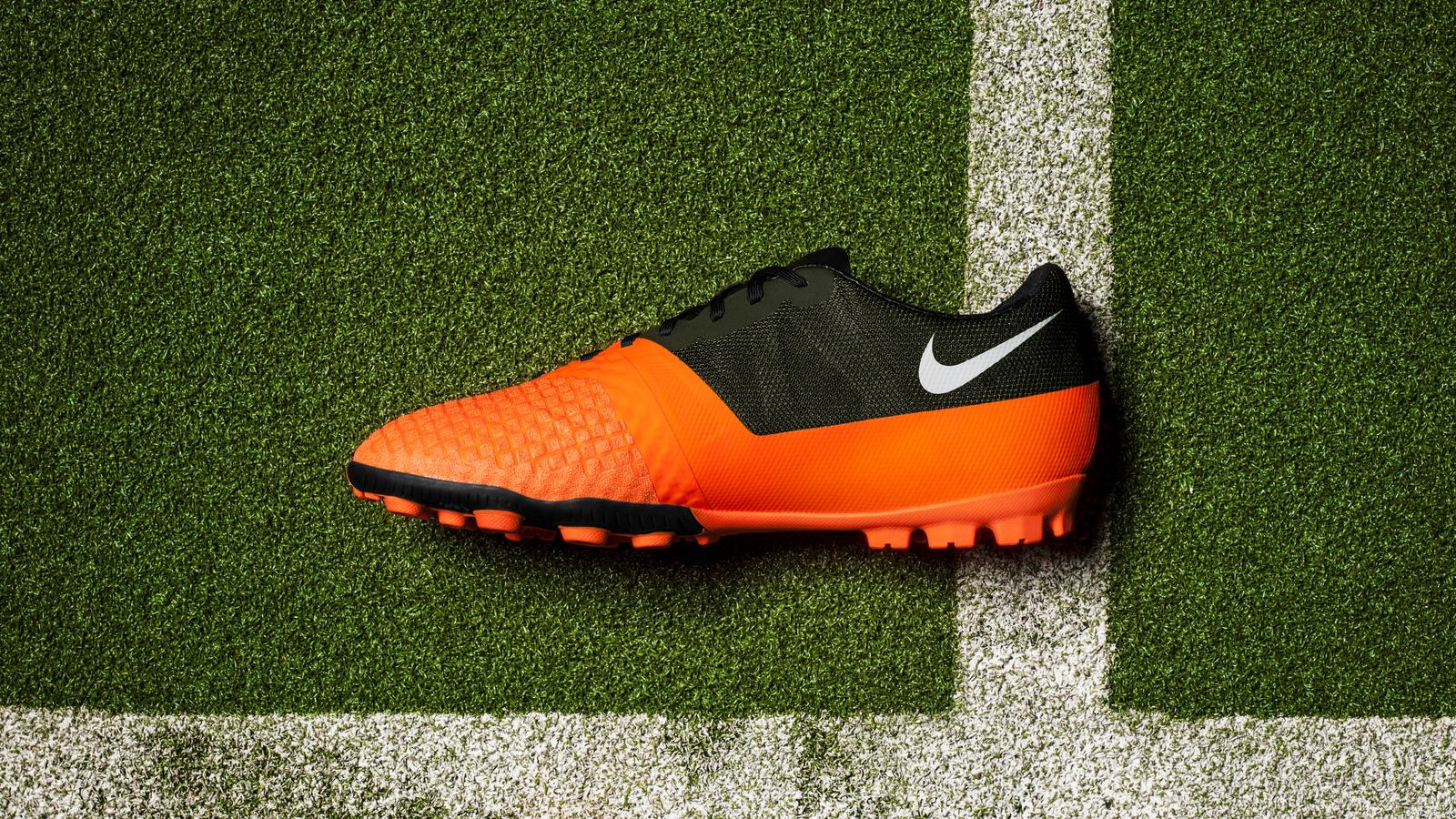 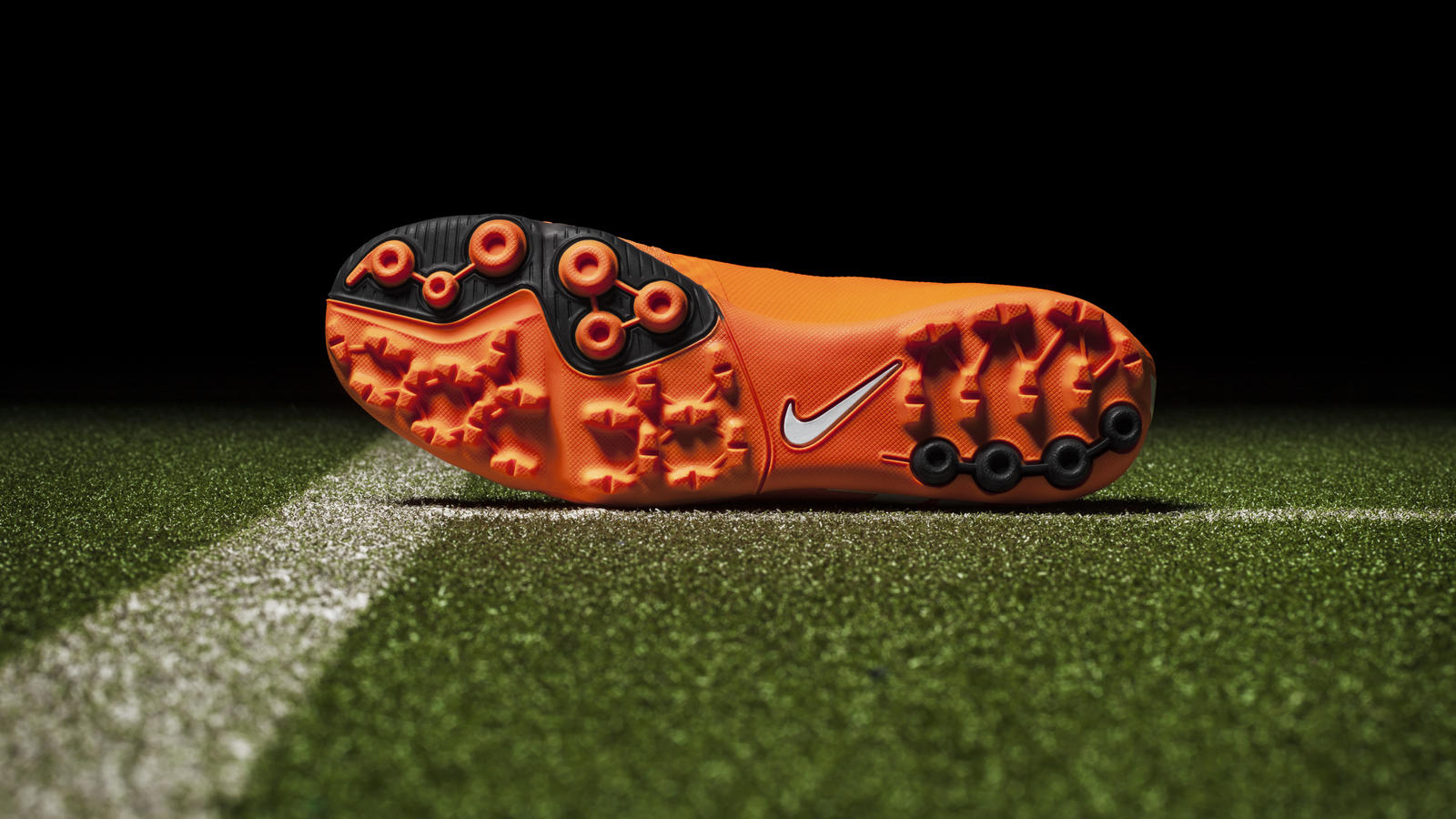 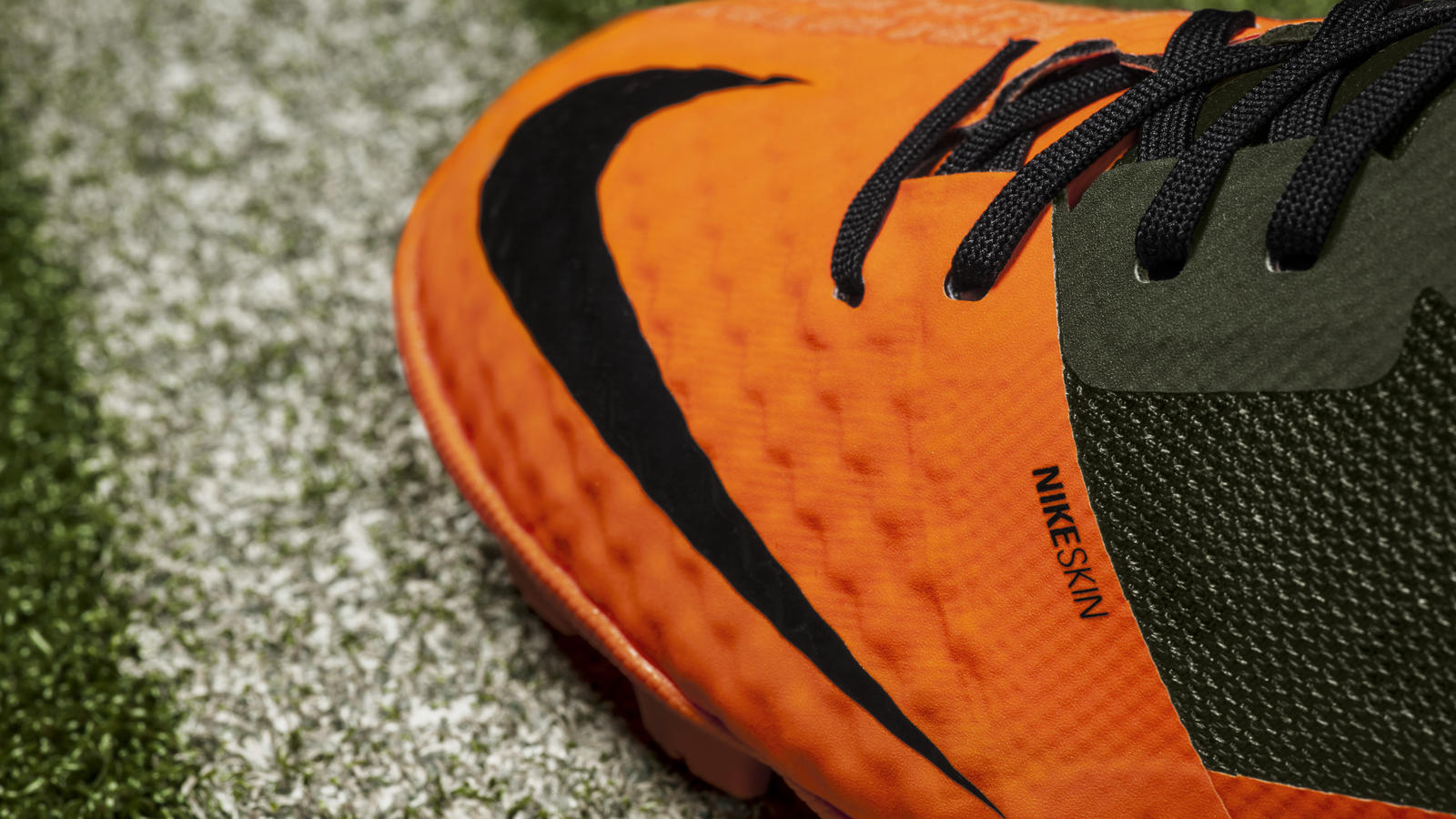 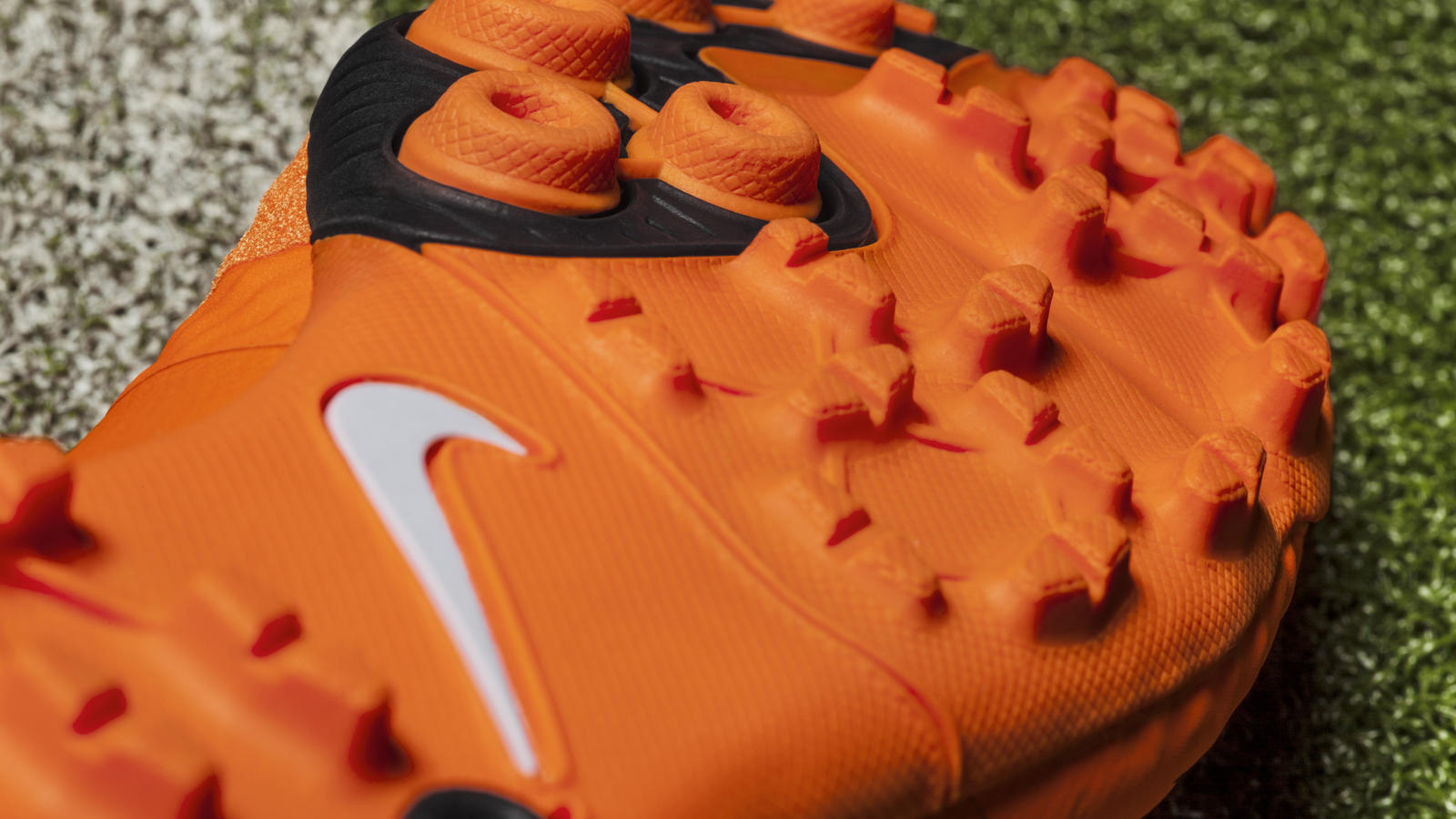 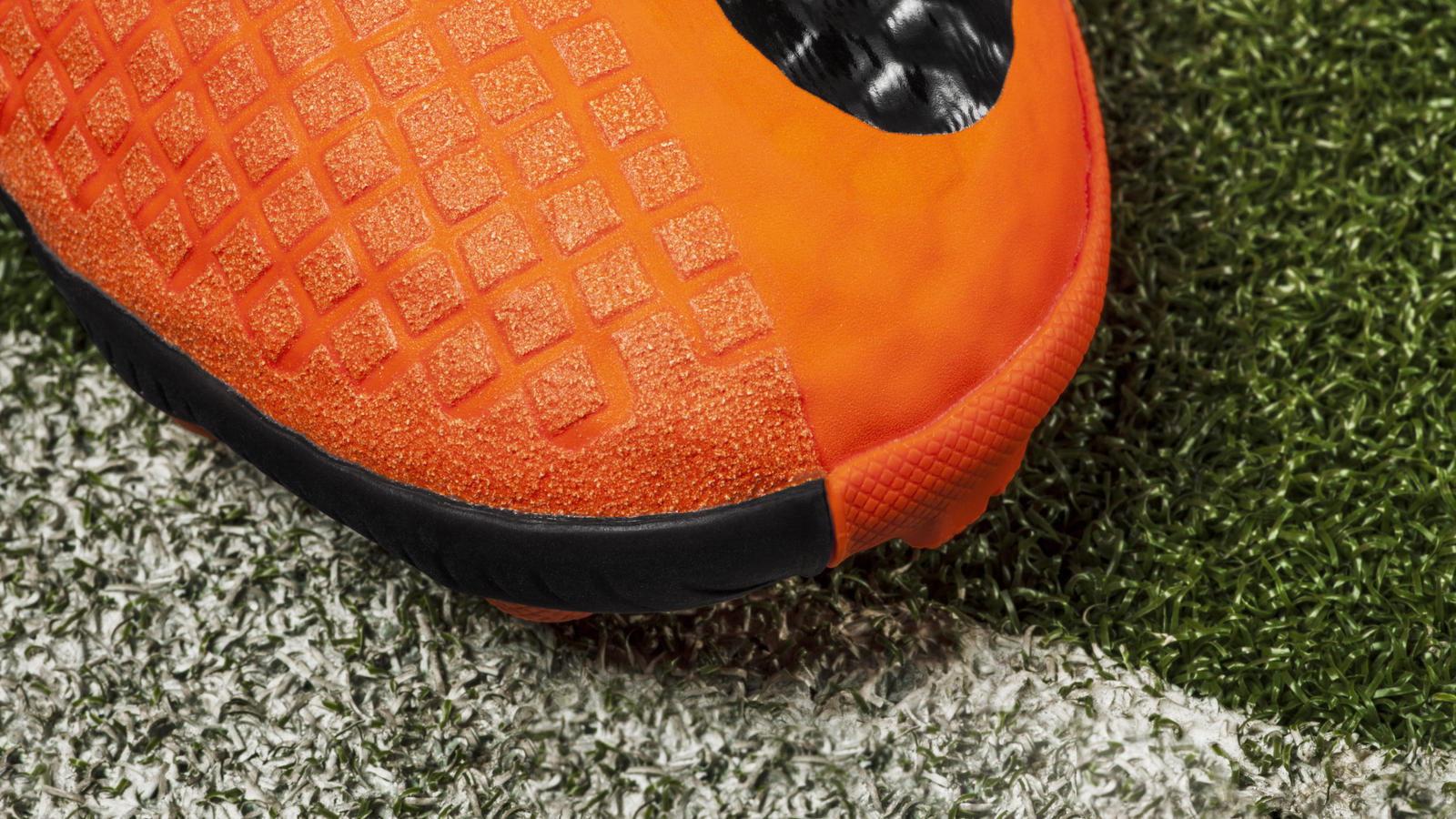 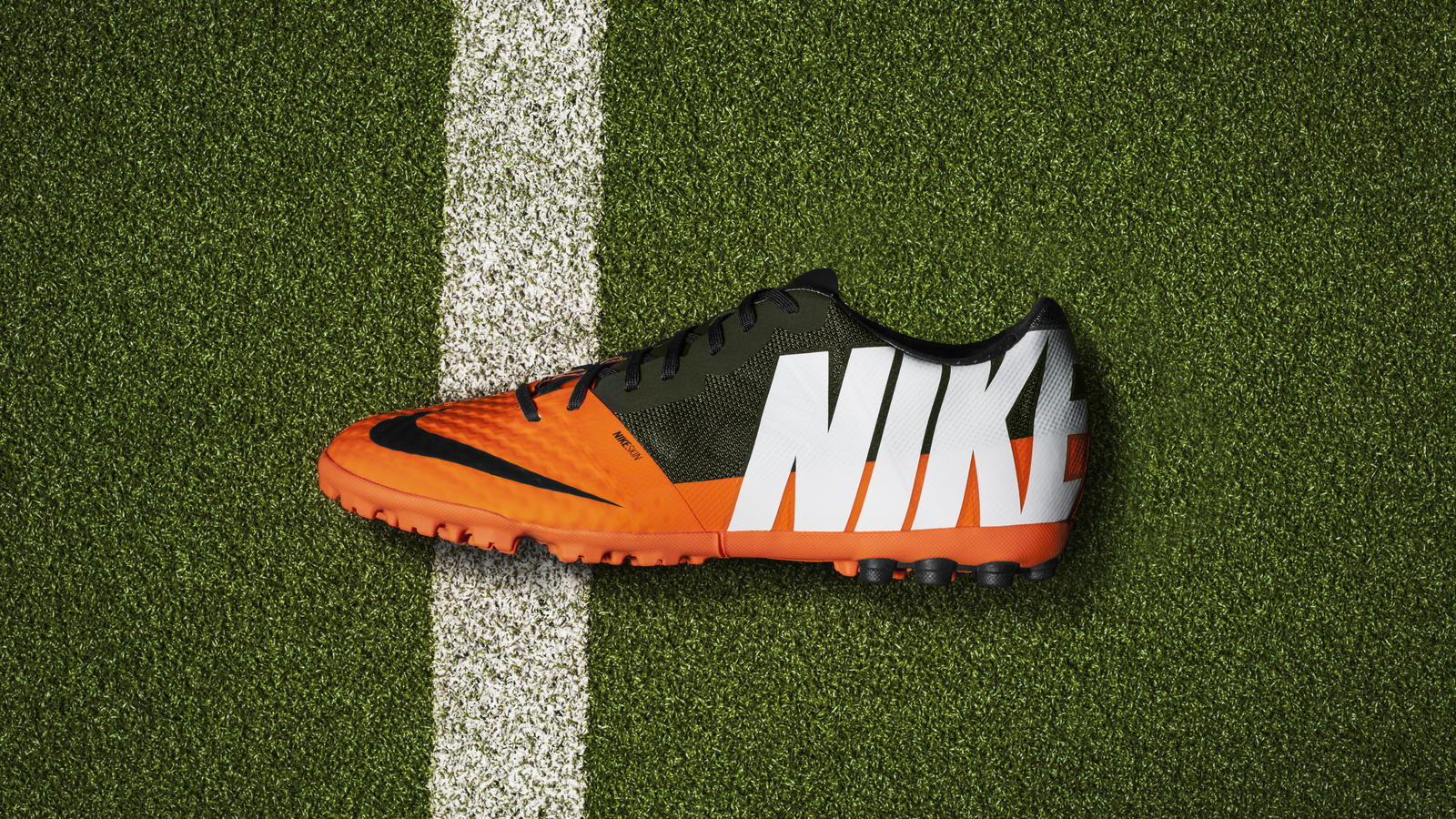 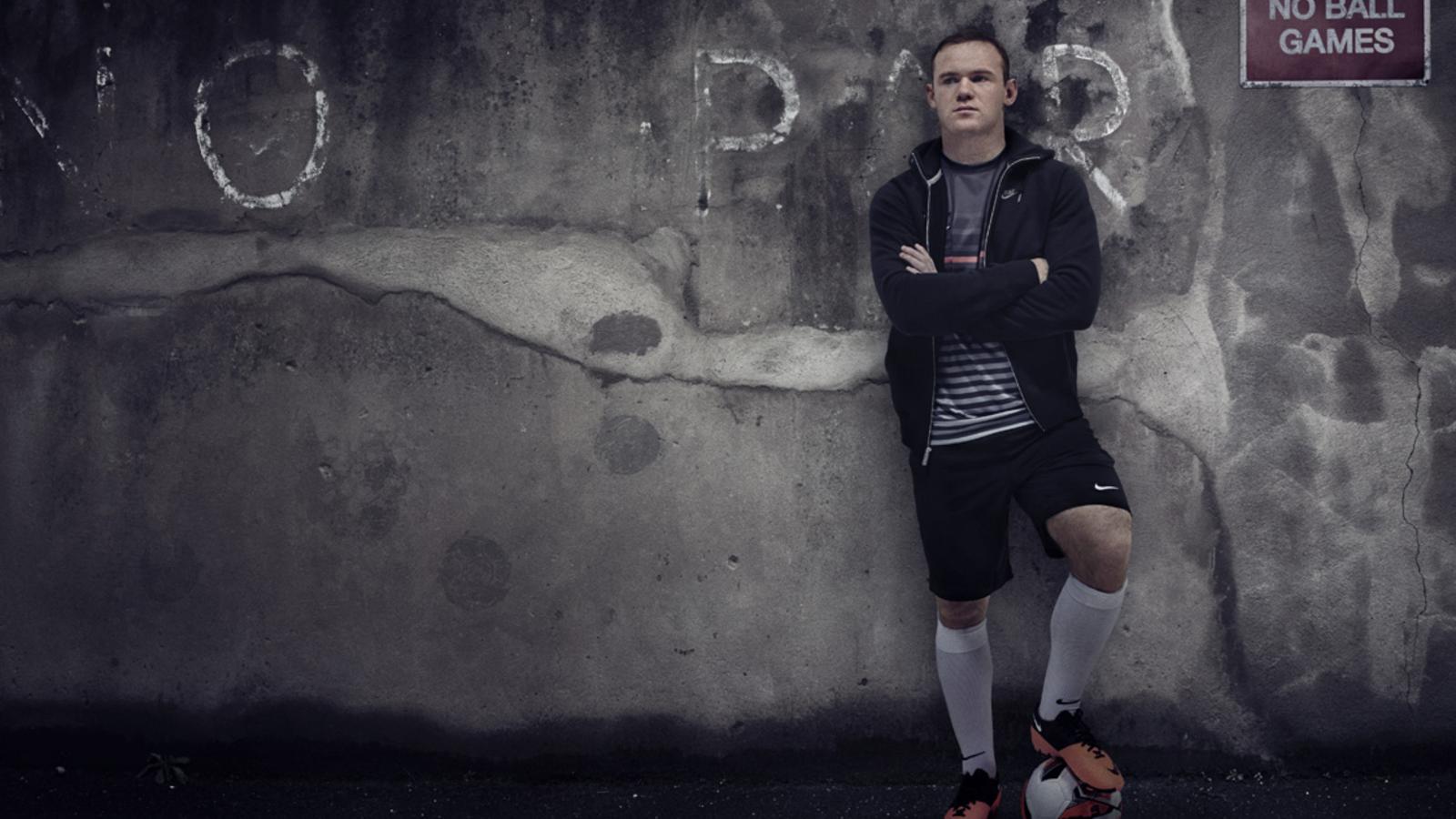 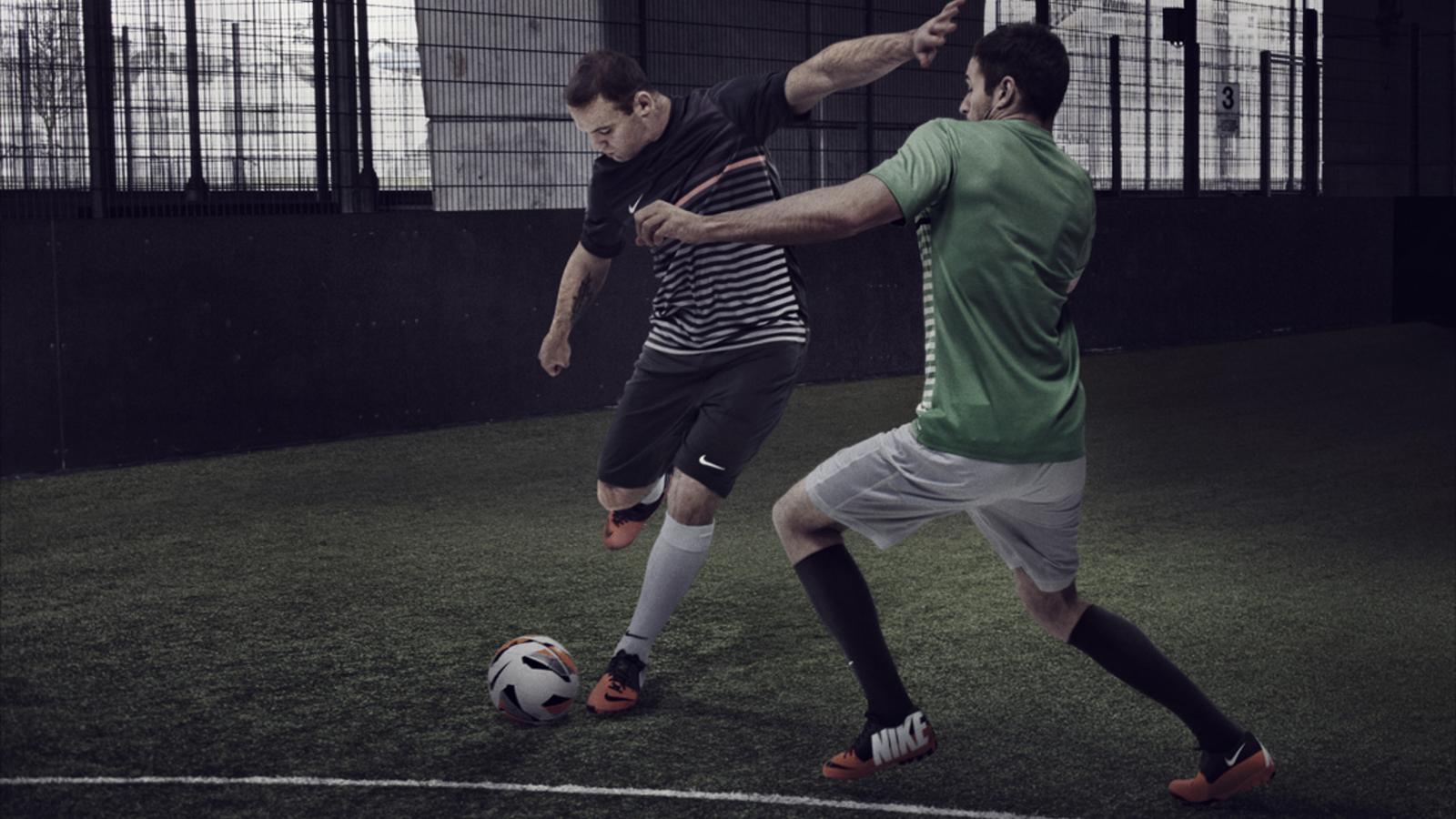 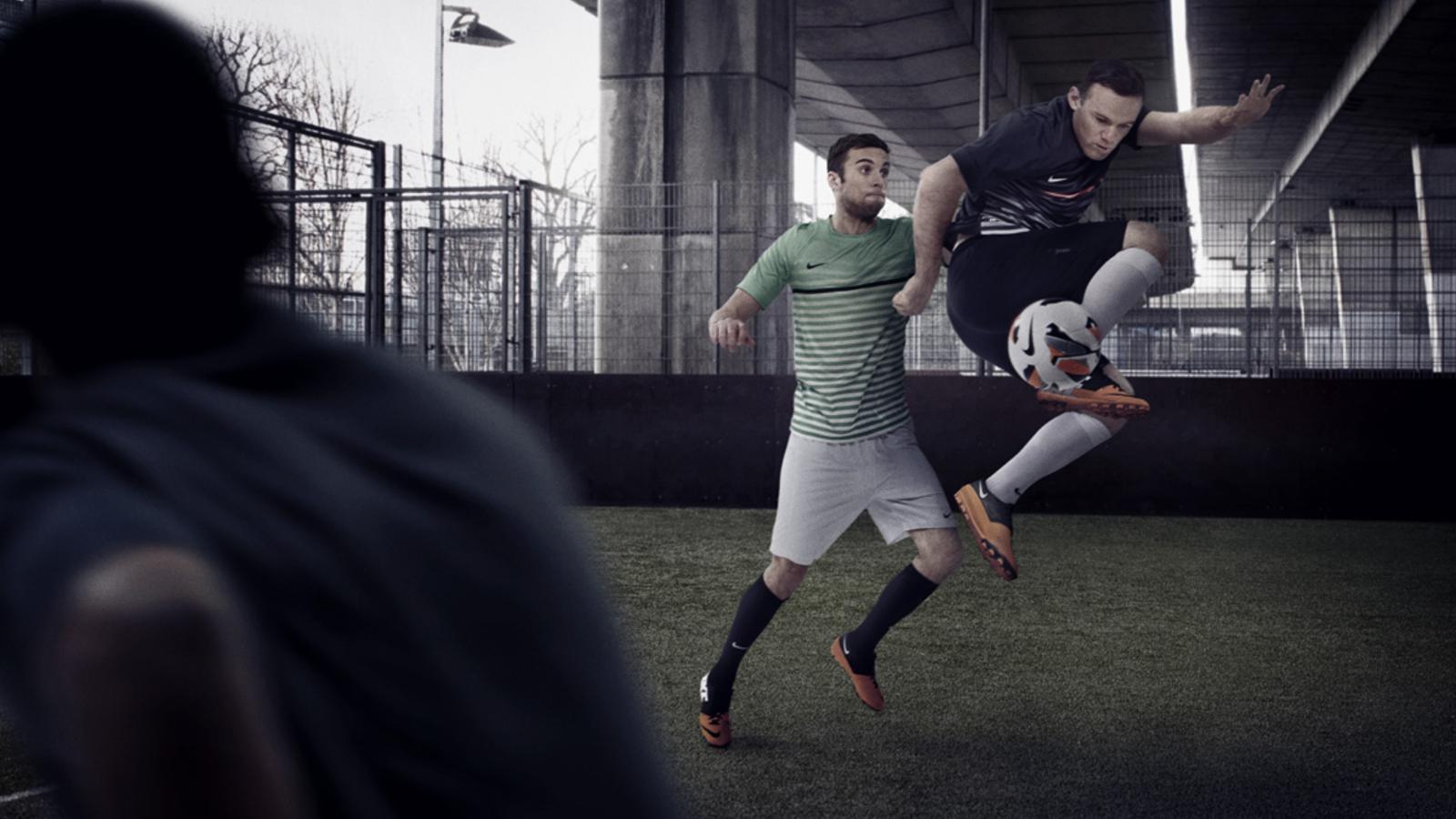 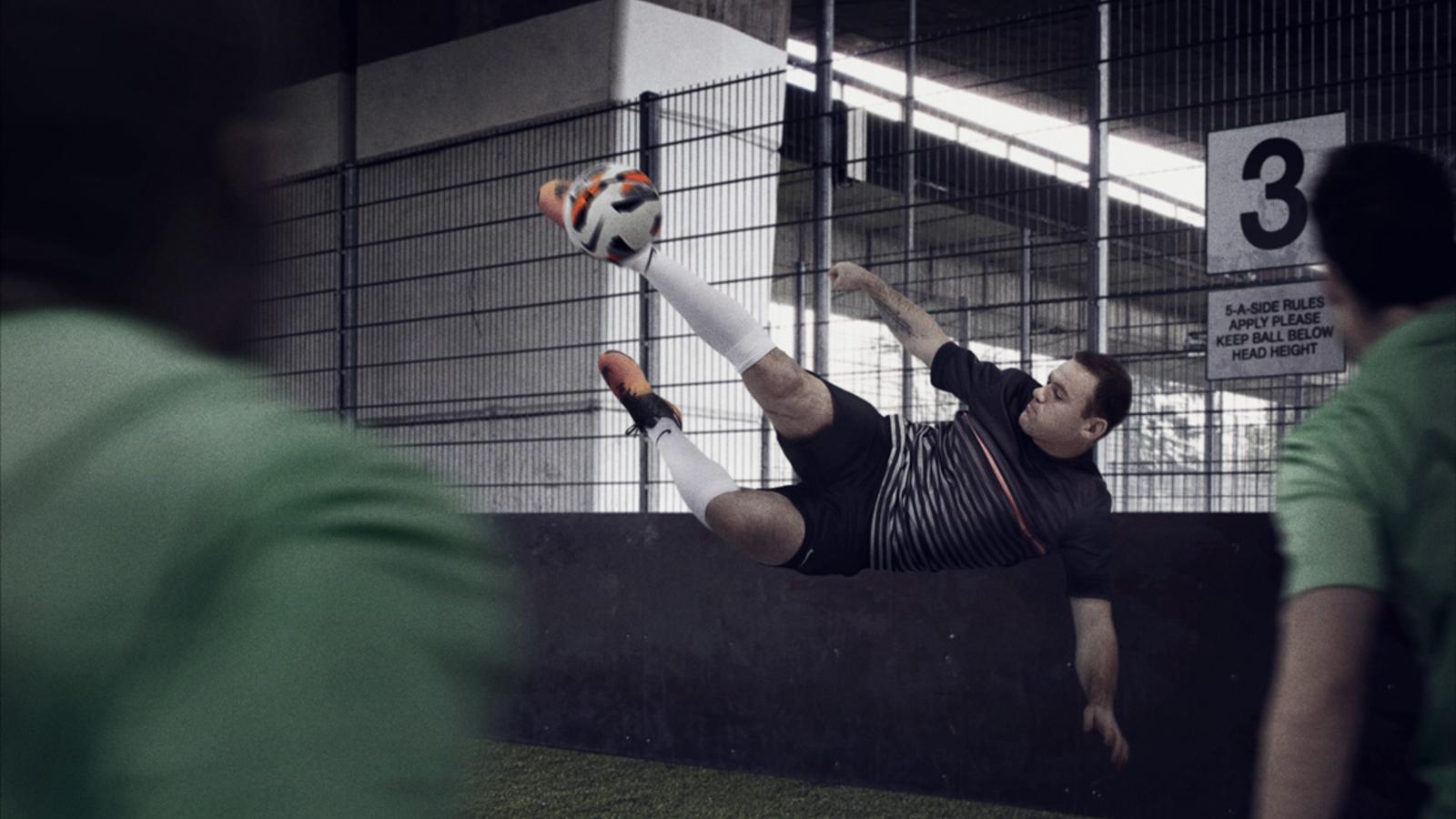 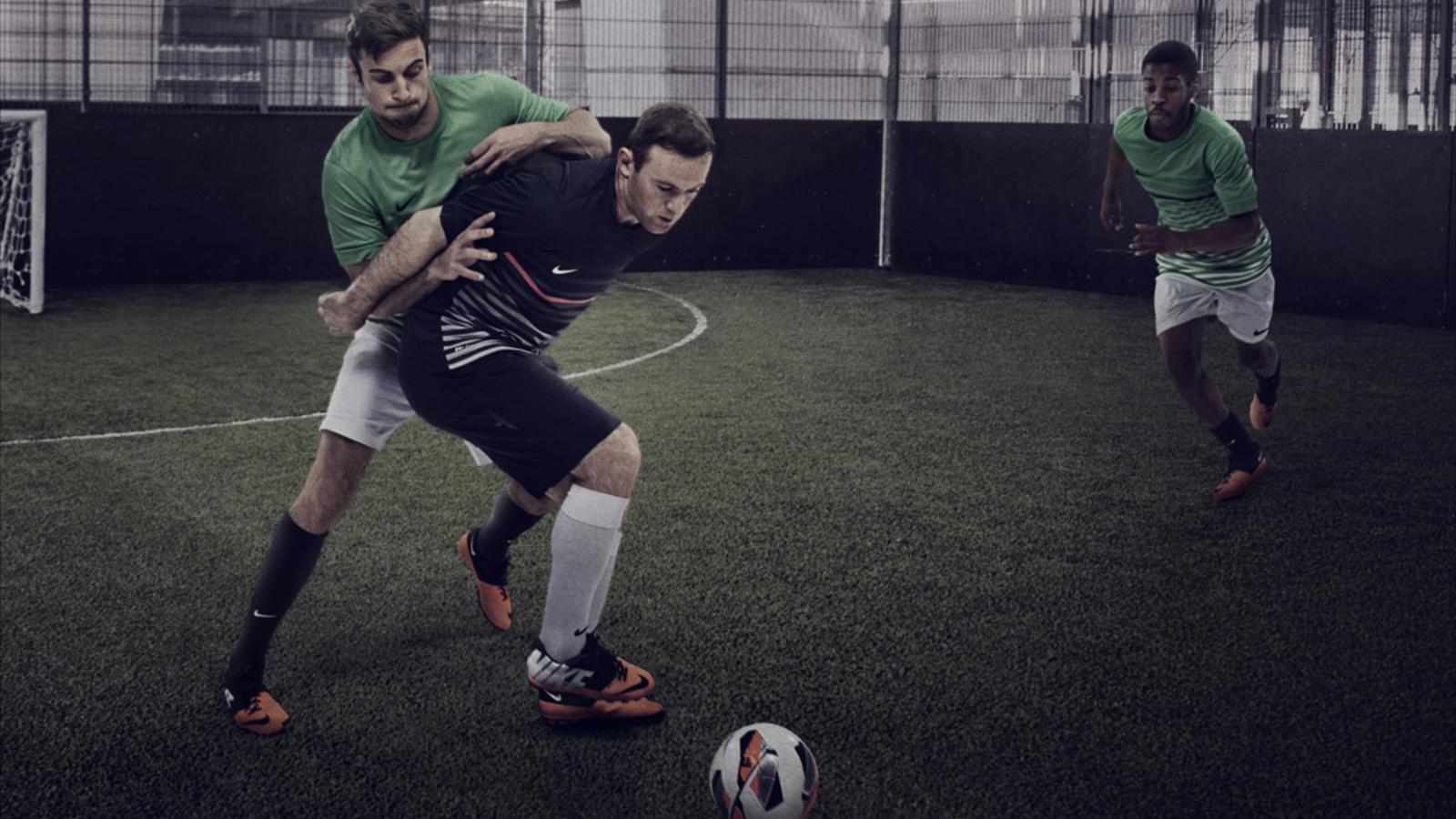 At a recent shoot for the Nike FC247 collection in Manchester, England, Wayne Rooney shared insights about small-sided football, opened up about growing up in Liverpool and named his favorite part of training. During the shoot, Rooney tried out Nike's new Bomba Finale II, a shoe created for the demands of astroturf-based football.

Wayne, tell us about the area in which you grew up.

Football was everything to me and my friends, and we’d go out every day to play. Before school, after school, during school, football was all we were interested in. I think that was the same for so many kids growing up near me. I’d wake up, have breakfast, go out and play, go in, put my uniform on and head to school with a ball. I’d play before class, at lunchtime, come home and get out and play until it got dark. It was like a job even back then. I loved it so much. I think my mum was quite happy, as she knew exactly where I was.

So where did you start playing football?

I was very fortunate. At the back of my house there was a small five-a-side pitch that belonged to the local youth club. I’d only have to climb over my garden fence and there I was. There were other places too, we’d find a pitch in most spots but it was that pitch behind my house that me and my mates would play on for hours.

How many people would be playing in these games?

After school it could start out as three-a-side but soon end up fifteen-a-side. In the school holidays it might get to even more but soon people would tire and drop out and you might end up with just a few of you and the sun going down.  I’d be out there on my own as well though. I’d go out with just a ball and practice shooting or dribbling or whatever.

So how much did that style of football help you perfect your skills?

It helped me loads. When I was on my own it was perfect. It was enclosed so I could smash the ball about and use the walls without the ball running away from me. I practiced passing and shooting all the time on my own and yes, I think it helped me get better and better.

Do you think those days affected the sort of player you became?

It helped me. I got used to having the ball at my feet and having to try and keep it at my feet. When you play that style of enclosed small-sided stuff you feel the benefits when you go out and play on grass in bigger-sided games because your control has improved and you benefit from having more space.

So how else does small-sided football benefit your game?

Small-sided games see you get the ball in much tighter situations and you need to be able to get yourself out of them. You are used to getting the ball and immediately are under the pressure and therefore learn about how best to cope with that pressure. When the pitch opens up in 11-a-side games, you seem to have all the space in the world.  It definitely helped me. That’s for sure.

What specific skills can young people learn from small-sided games?

It’s great to master the game on concrete or Astro and if you can learn to control the ball and do tricks in small-sided games then once you come to a nice grass pitch you’ll find it easy.  Playing in these small games and just working hard on skills, tricks, moves, it will help massively in the long run. Everything I learnt came from those small matches. The tactical side of things comes later but 95 percent of my game is from those days playing as a kid.

We can all see that today you have a competitive streak running through you. Was that developed on that tarmac pitch behind your house?

Yes! I have always been like that, whether I’m on the golf course, the computer or the football pitch. I have always wanted to win and it comes from how I was brought up. If I was losing against my mates, I could lose my cool if things went against me and now as a pro that’s something I’ve had to learn to control. You need to be competitive I think.

When you scored your famous goal against Arsenal in 2002, you went home and had a kick-about with your mates. Do you remember much about that game back home?

Yes, we went and played in the garages nearby.  We’d practice our finishing all night. No one treated me any differently. A few congratulated me about the goal but otherwise no one really made a fuss.

Do you still get the temptation to get out and have a kick-about?

It’s harder now because at United we have so many games and rest is so important. I wouldn’t want to get injured either. I go in my garden as I have a five-a-side-pitch there and I take my son down and try and show him a few tricks.

How big a part do five-a-sides play at Manchester United?

We do a bit at the end of every session and it is the best bit of training. It’s not for long but it’s what we look forward to most. Having said that it is really important. You get to express yourself, I get to try and score goals and I as I said before, you work on tight situations and how you’d get out of them.

You’ve played in some of the great stadiums in the world but do you still get an urge to join in on a park when you’re passing?

Yeah of course. It takes you back to growing up when you’re learning to play. I love to see kids doing what I was doing when I was their age and it’s exciting to think that some of those guys will go on and make a career in the game.

What are your top five tips for playing small-sided football?

First of all awareness. It is so tight and you need to know where defenders and team-mates are. Next is vision. Again, it is very tight and you must work on seeing the spaces available. Technique is vital so your passing and shooting can be spot-on. Strength will help you, as you need to hold players off. and finally, finishing. All good teams need a good finisher, and with small goals, you’ll need to be at the top of your game. Just keep trying. There’s no pressure. These are the games when you can try new tricks without being judged.

Manchester United has been so strong in the league this season. How much of that form stems from the very bitter disappointment felt at the end of last season?

To lose the league in the last second was a bad feeling but when you’re at a club like United, you have to be full of motivation and desire to win every year. That comes from the manager, and all the players are aware of that. The club and the players have to be full of that desire and that’s why the club has been so successful.

You have a healthy lead at the top of the league, but how do you stay motivated and focused when it looks wrapped up?

You have to stay focused. You have to make sure that we keep doing our job and keep our concentration. One bad game and everything could fall and so we go out and play each game with a positive attitude.