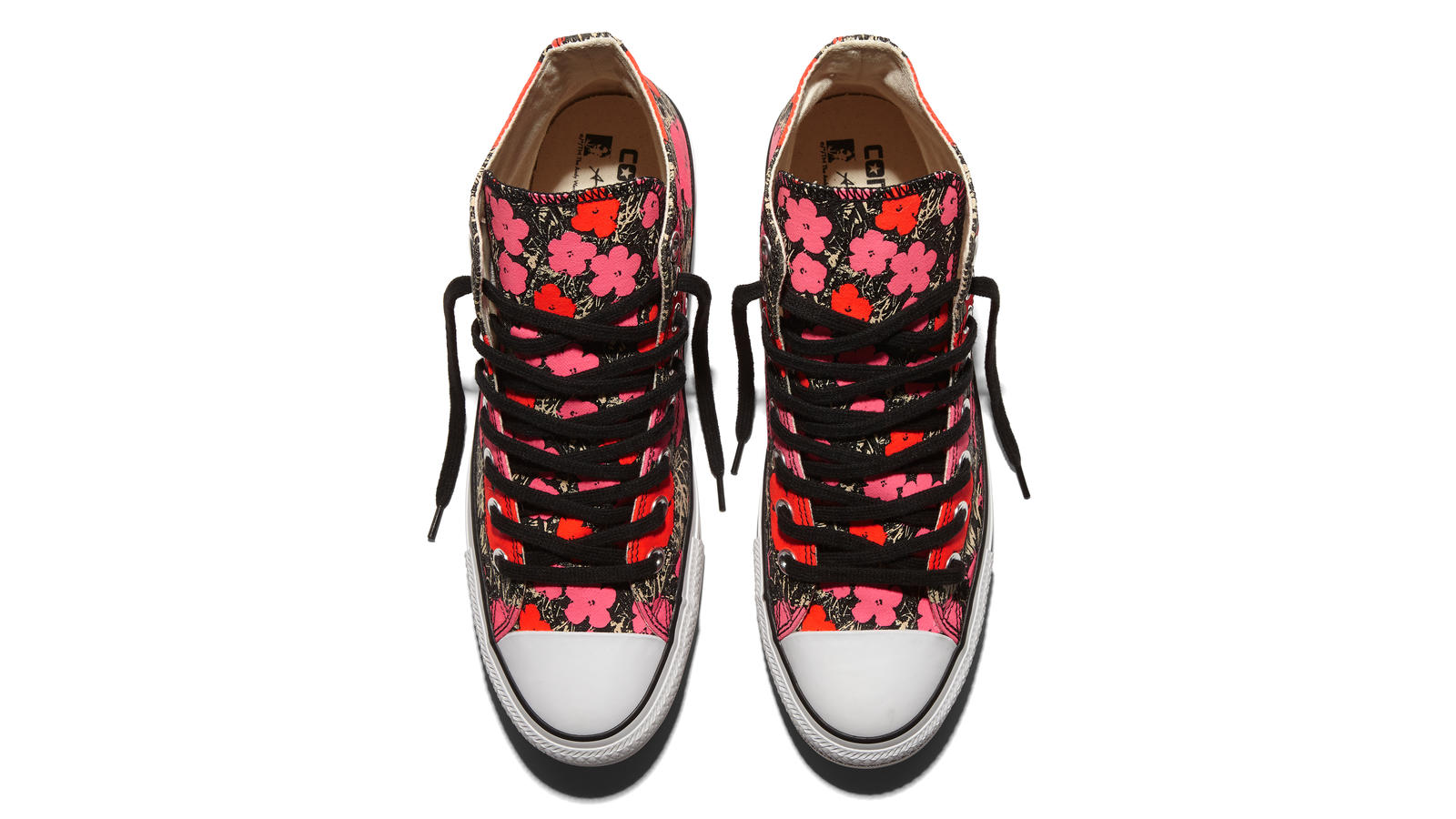 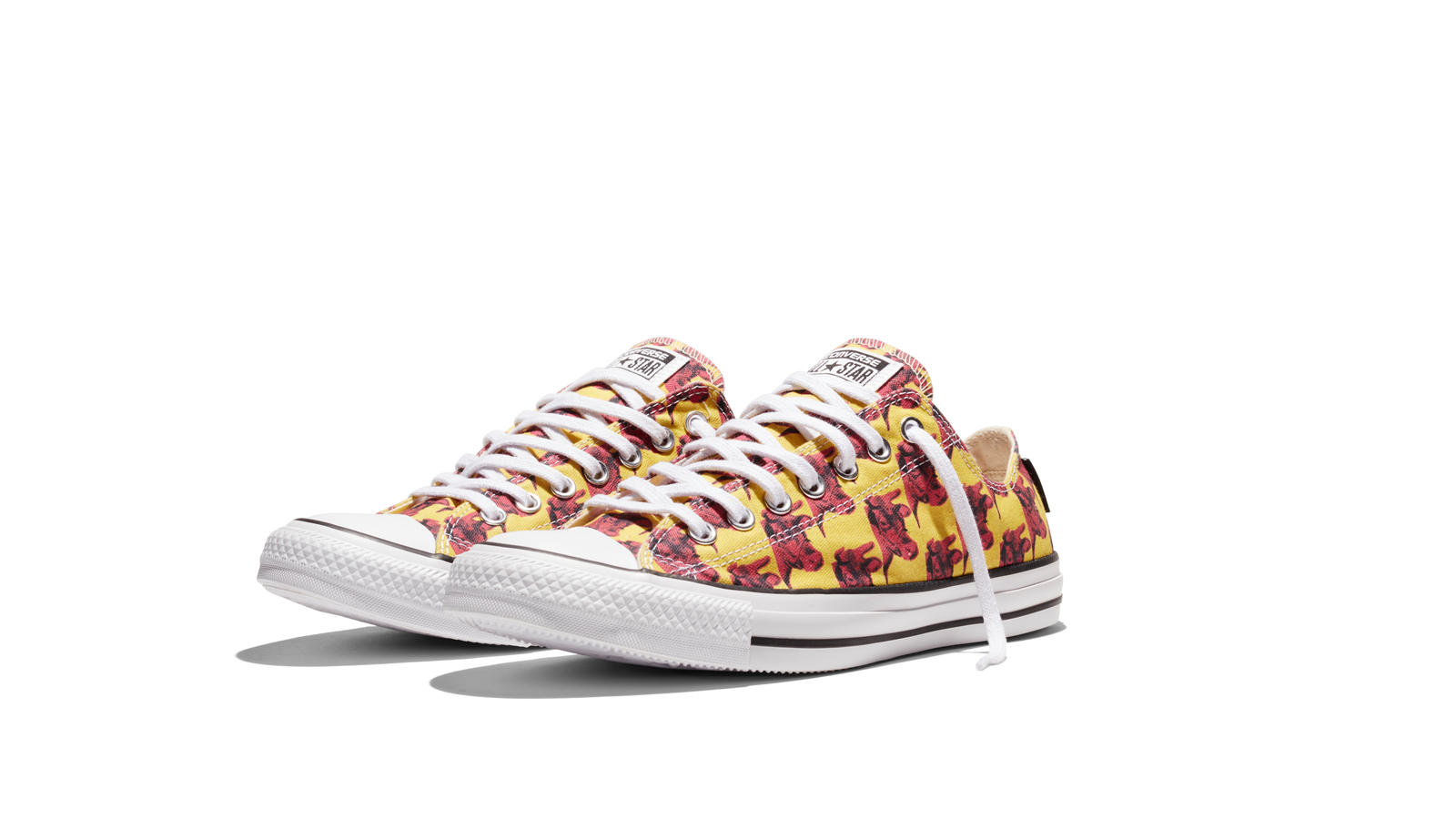 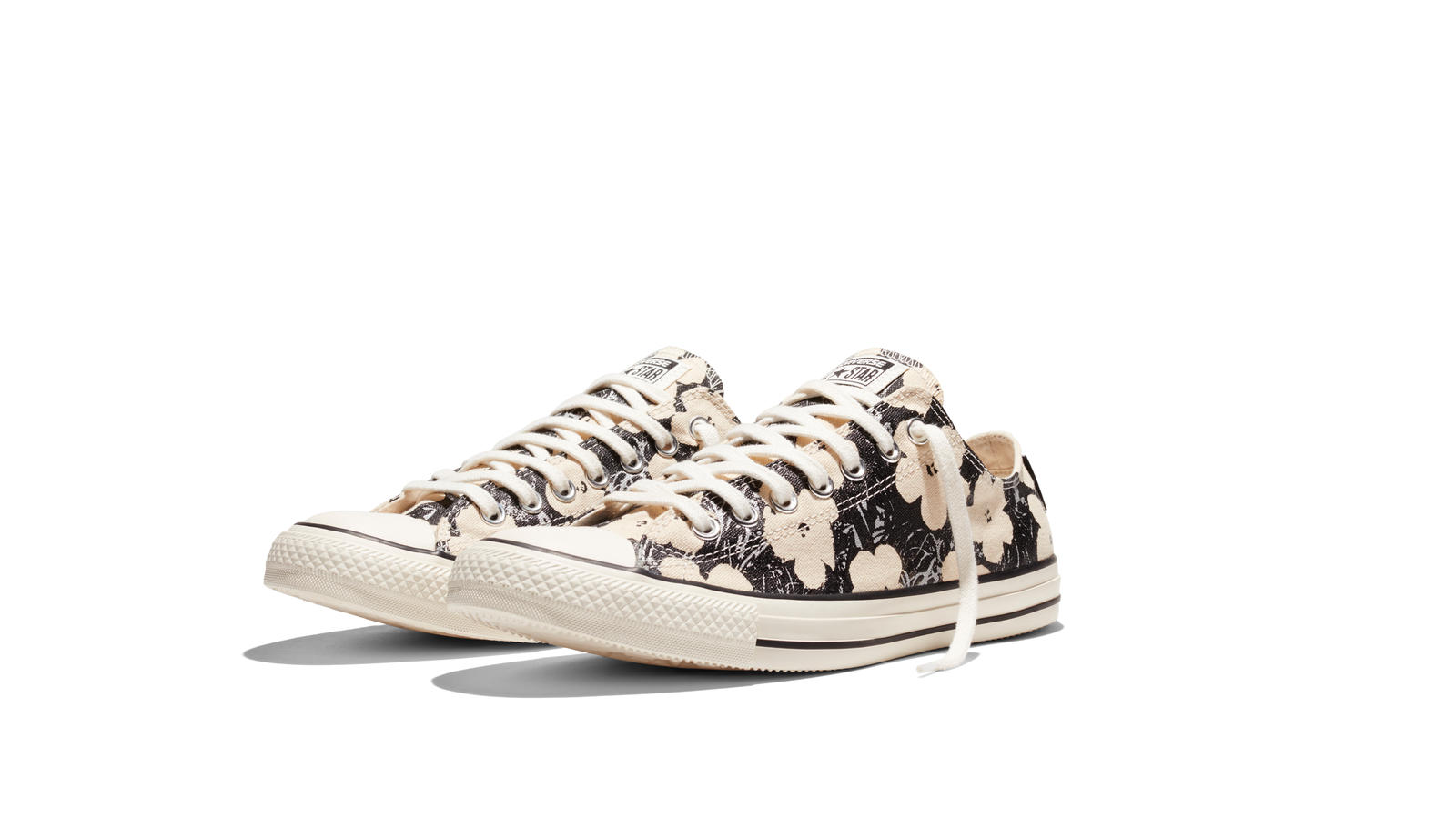 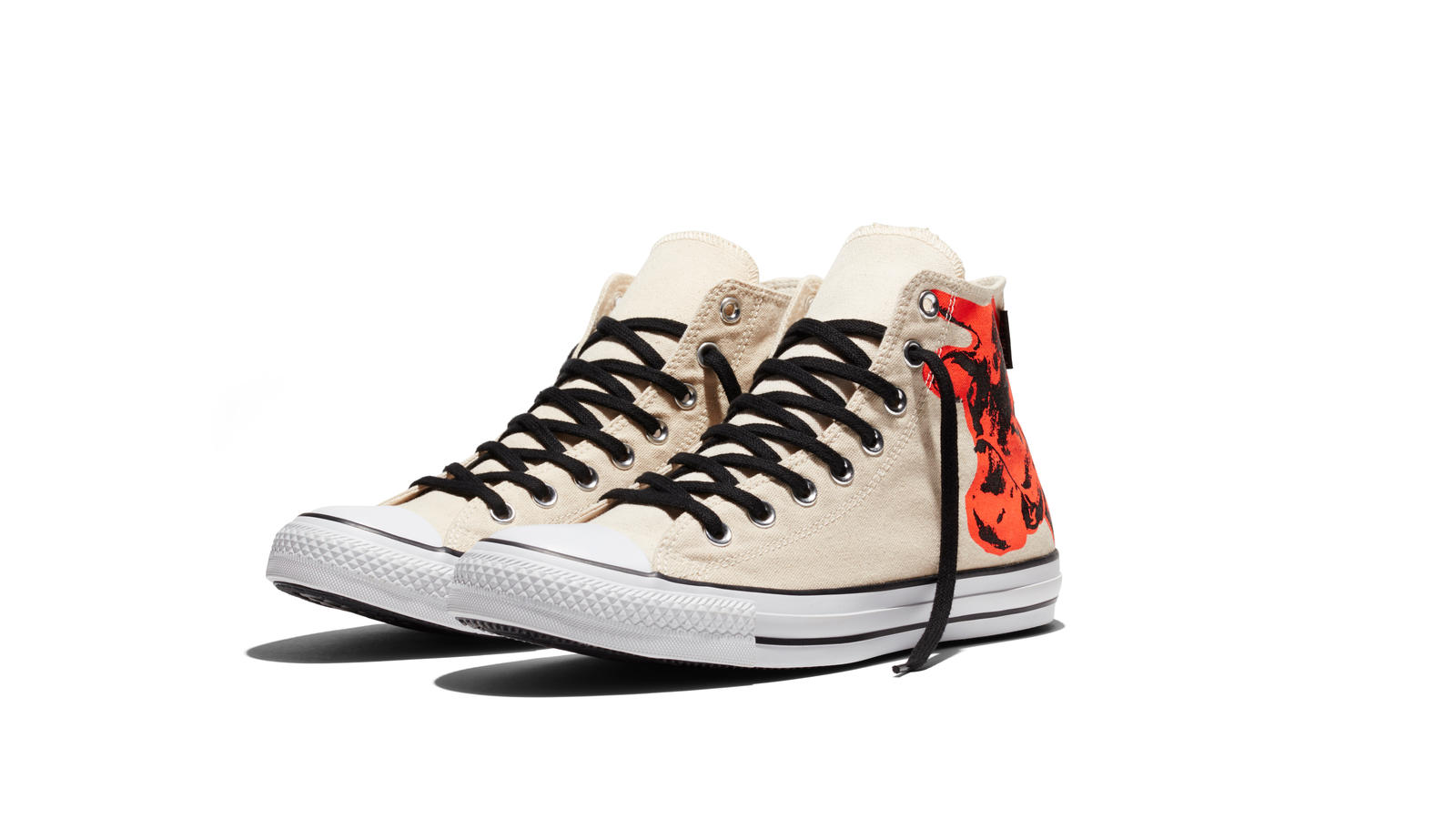 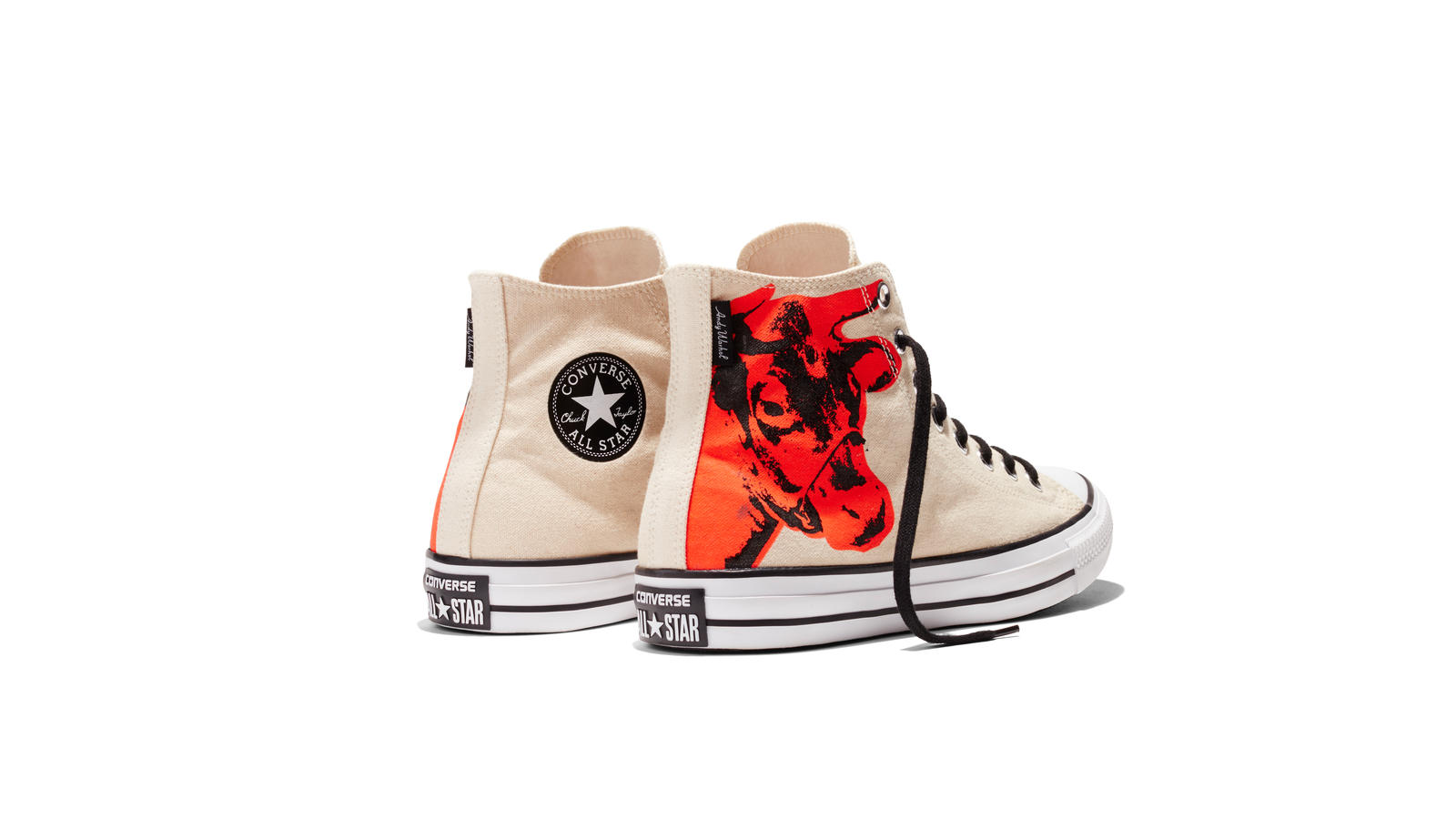 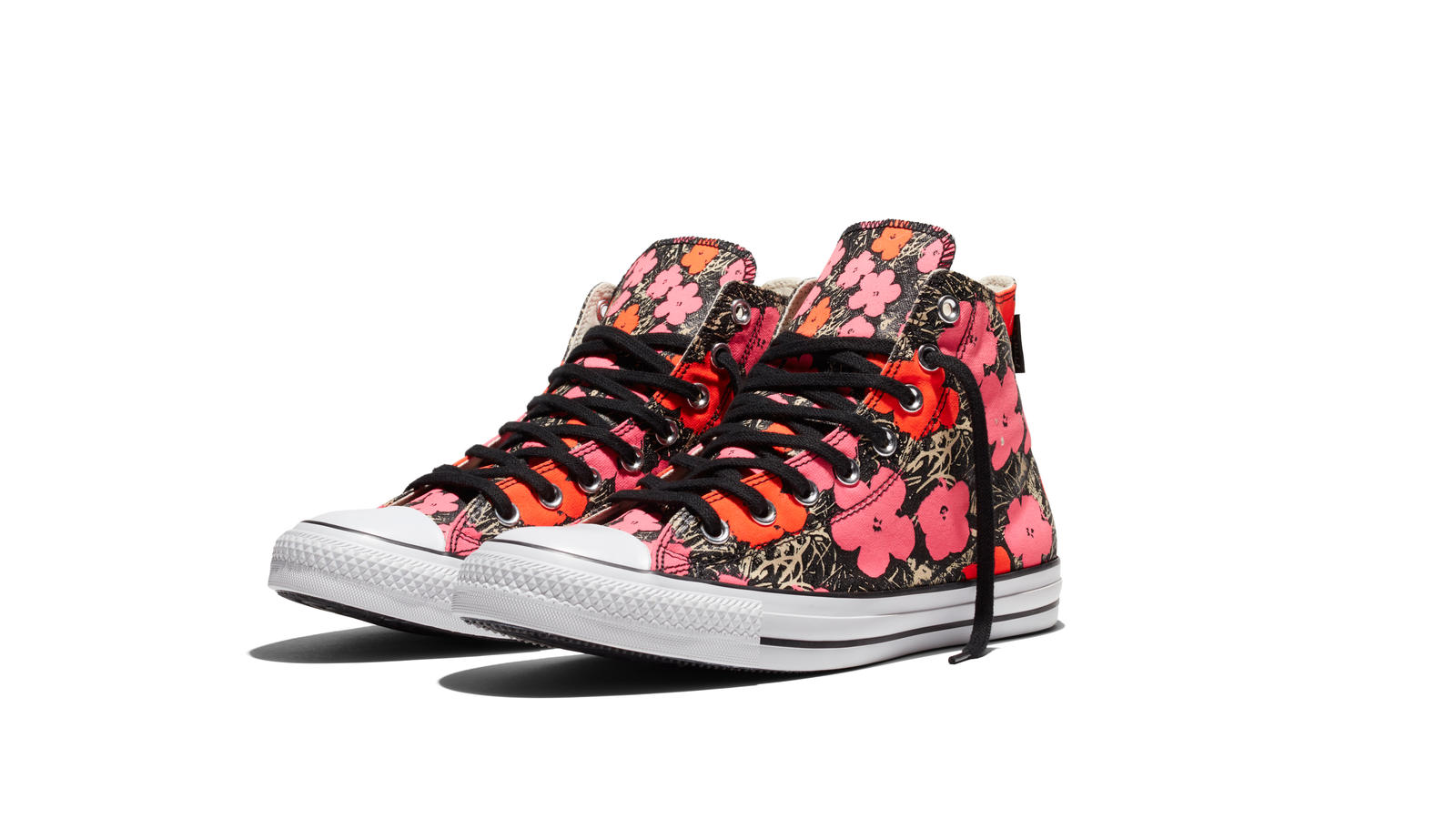 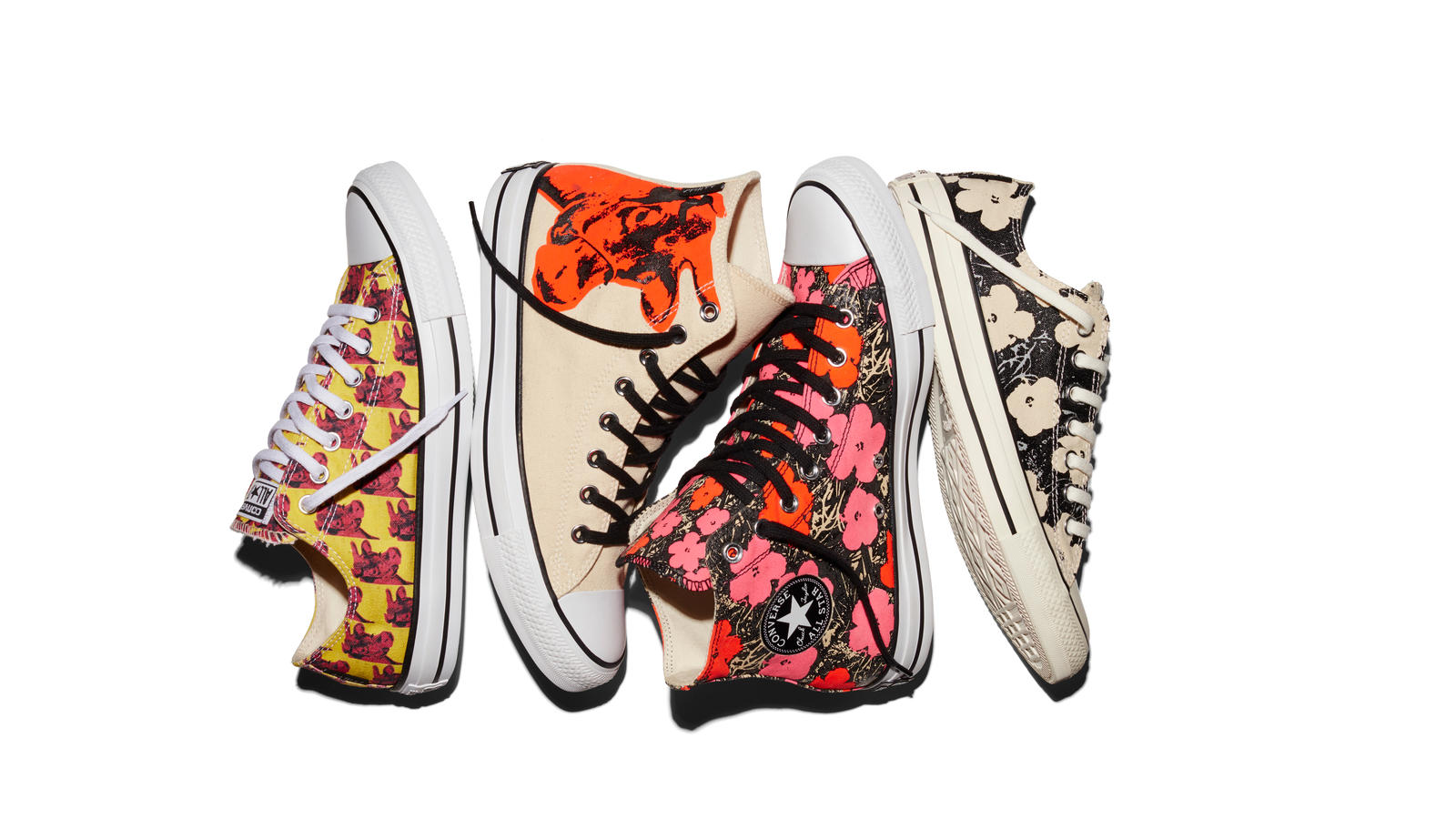 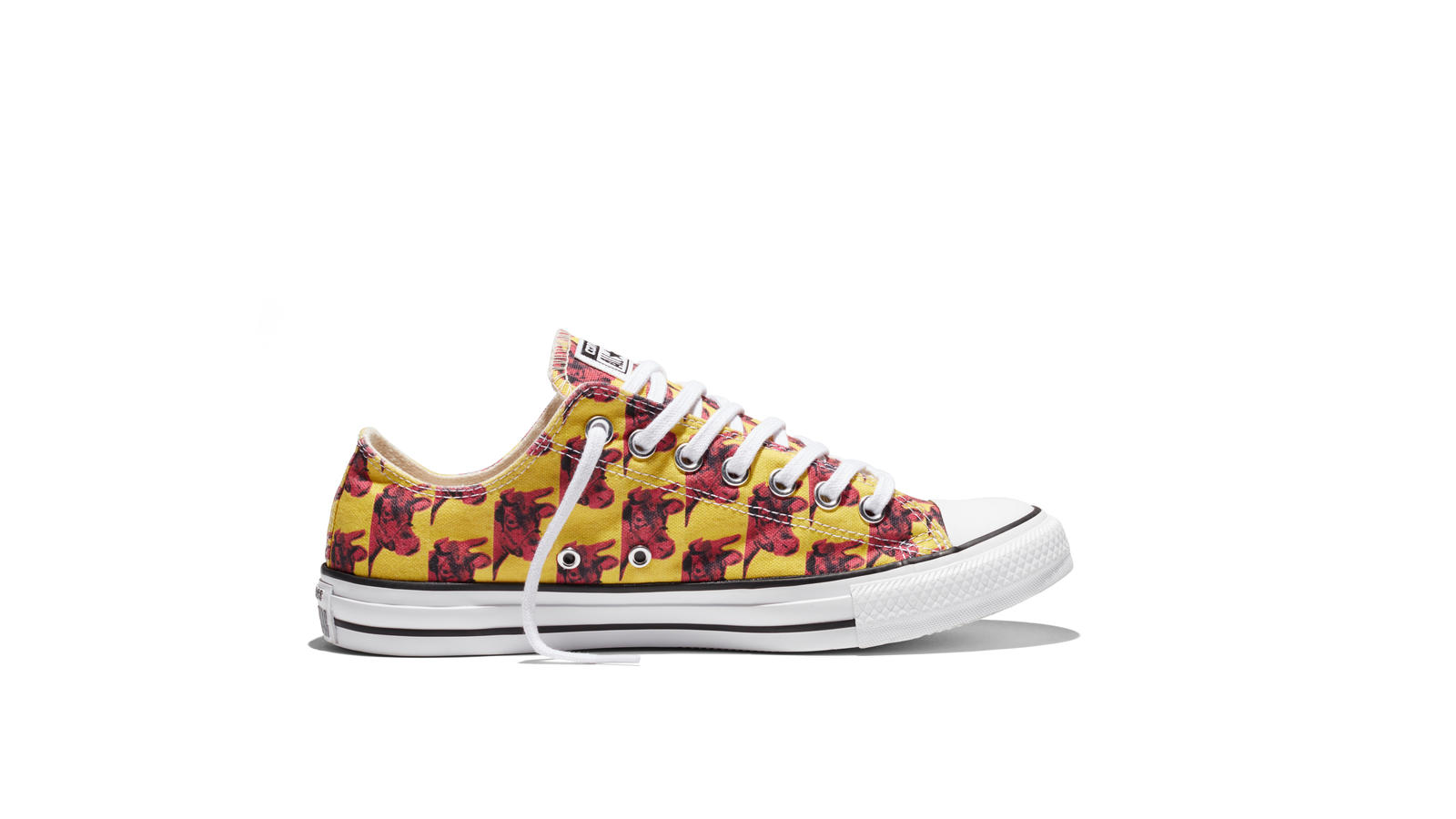 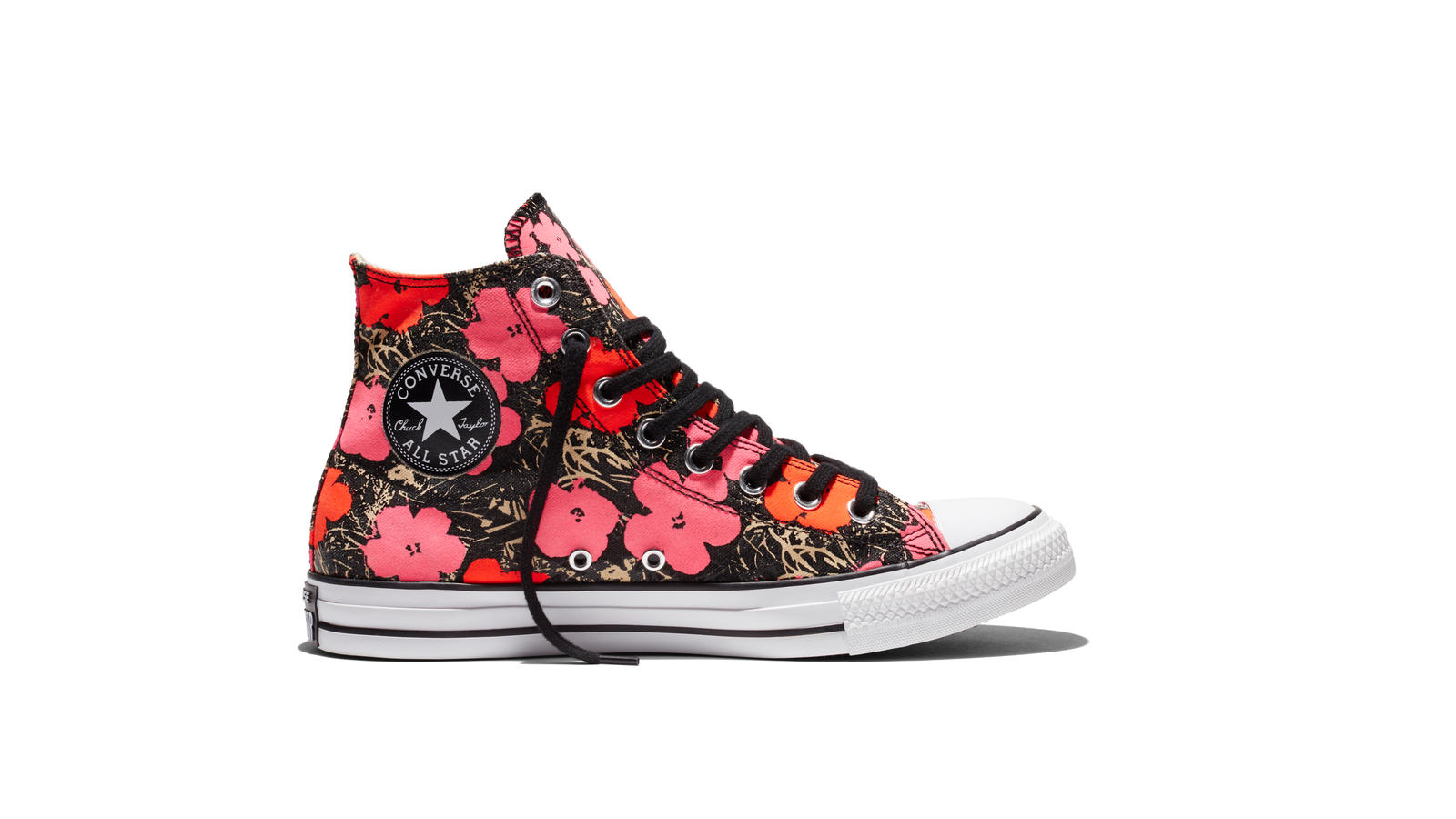 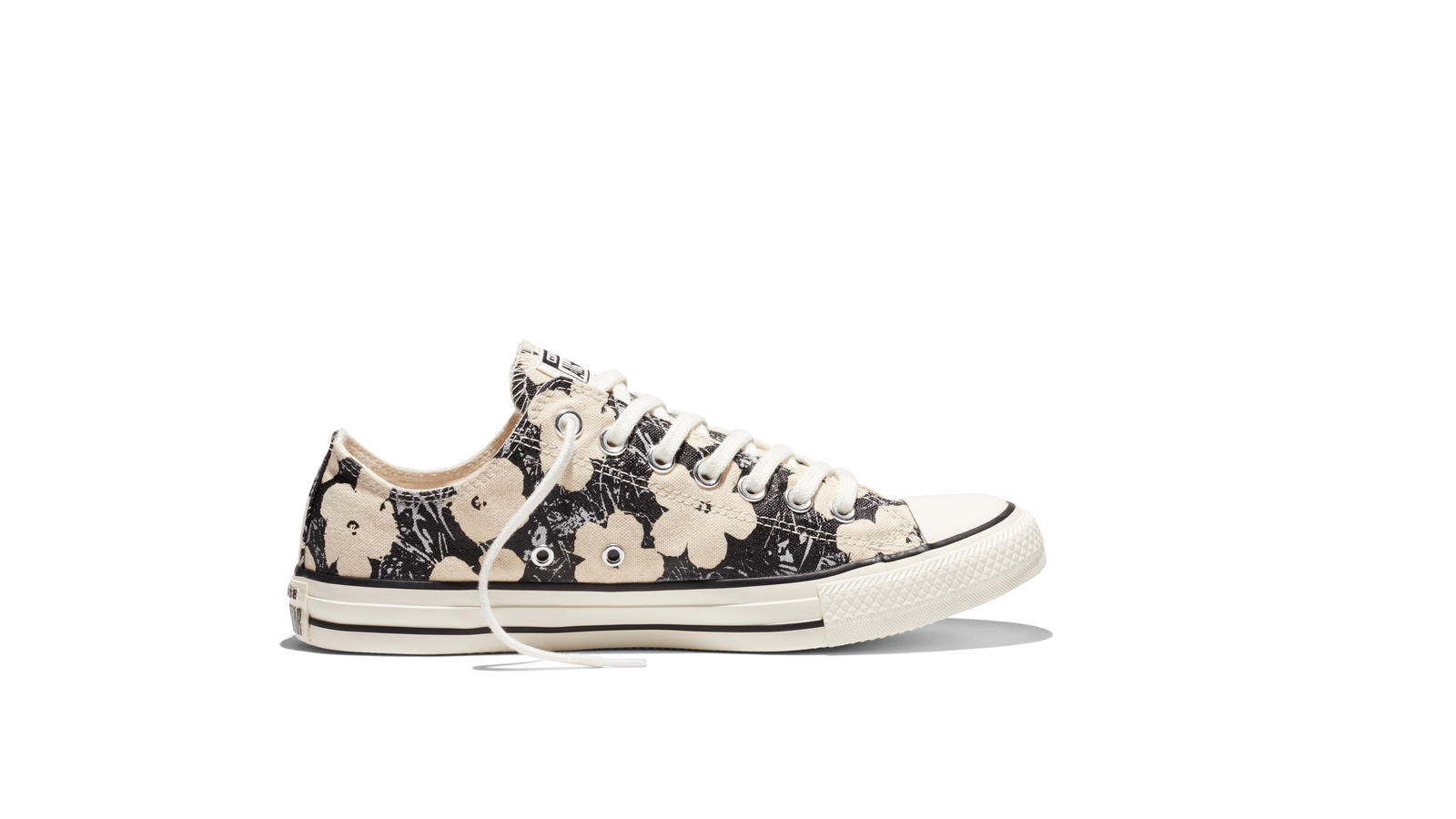 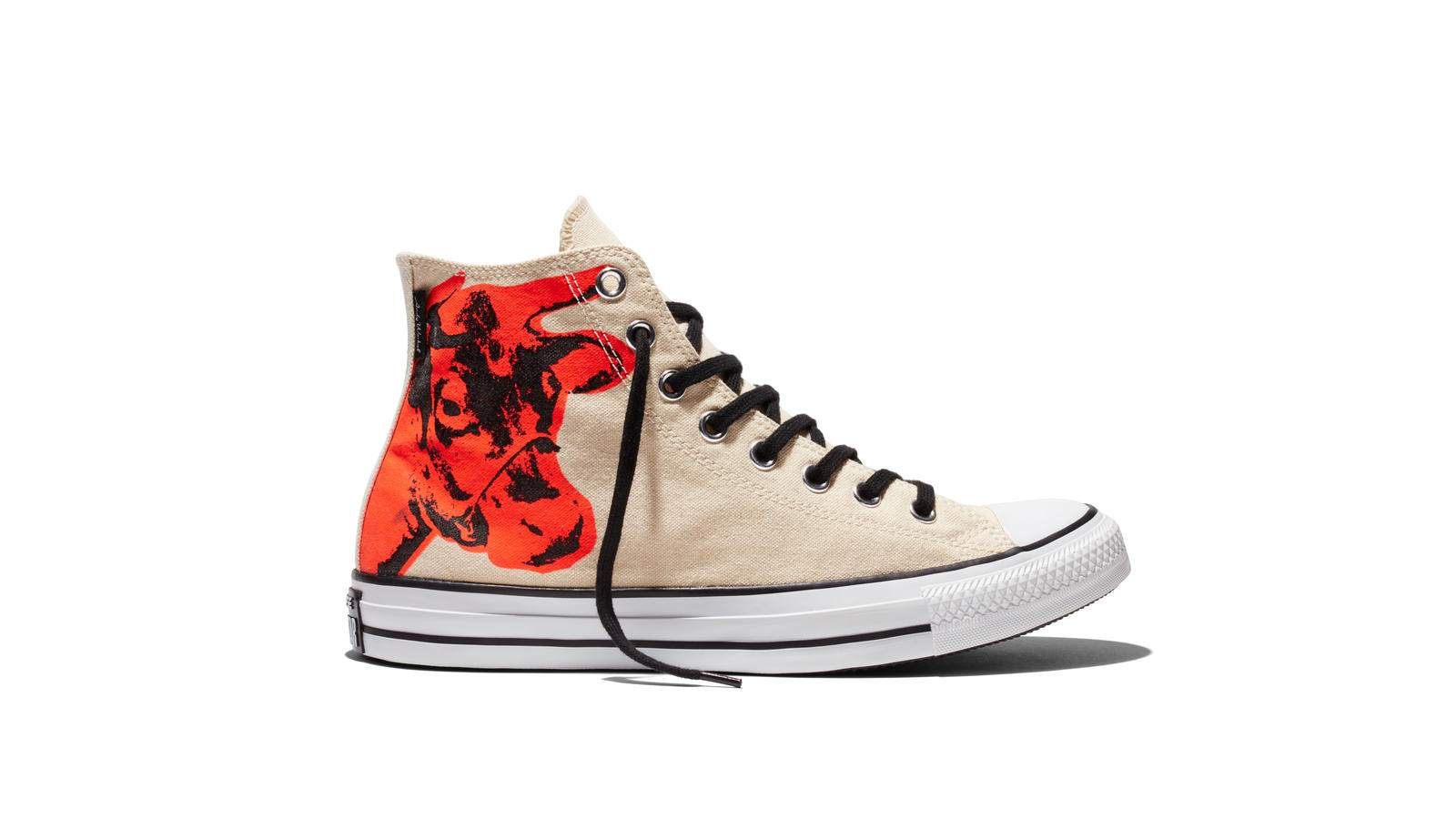 Returning for a third season, Converse brings the works of legendary pop artist Andy Warhol to life for sneaker and art enthusiasts. A celebration of individuality, imagination and artistic expression, the Converse Chuck Taylor All Star Andy Warhol Footwear and Apparel collection features two of Warhol’s iconic pieces from the 1960’s - the eye-catching Andy Warhol Cow wallpaper and Flowers, along with bold imagery across an array of expressive Converse tees.

The continuation of the partnership between Converse and The Andy Warhol Foundation celebrates the visionary artist in all of his glory. The Converse high and low top Chuck Taylor All Stars have been given a custom graphic application, which showcases Warhol’s Cow and Flowers silkscreen artworks, and applies these iconic patterns to the sneakers. On the high top sneakers, a single Cow print is applied in a bold bright pink, offset by the striking white canvas, and the Flowers print utilizes a daring poppy red set against a black and white background. Each style has a surprise glow in the dark element, paying homage to Warhol’s own black light paintings. The low top Cow sneaker stacks a repeat print on top of one another in a yellow and red formation, while the Flowers print stacks the pattern in a natural color that adds depth and dimension.

This season’s collection also features a selection of graphic tees complete with images from Warhol’s famed Flowers prints, which are overlapped on soft cotton for a fun whimsical look.

Hailed as the preeminent artist of the 20th century, Warhol was an iconic visionary whose legacy continues to inspire rebels and artists worldwide. He creatively merged pop culture, film, music, screen printing and performance, opening the door for millions of artists and performers. Since 1987, Warhol’s vision and creativity lives on through The Andy Warhol Foundation, who fosters innovative artistic expression by supporting work that is challenging and experimental in nature.

The new Converse Chuck Taylor All Star Andy Warhol Collection will be available at Converse retail stores and online at Converse.com. The footwear will retail for a suggested price of $80-85 USD with the apparel priced at $35 USD.

Converse Inc., based in Boston, Massachusetts, is a wholly owned subsidiary of NIKE, Inc. Established in 1908, the Converse brand has built a reputation as “America’s Original Sports Company”™ and has been associated with a rich heritage of legendary shoes such as the Chuck Taylor® All Star® shoe, the Jack Purcell® shoe and the One Star® shoe. Today, Converse offers a diverse portfolio including lifestyle men's, women's and children’s footwear, apparel and accessories and is sold globally by retailers in over 160 countries. For more information, please visit media.converse.com and follow @converse.

About The Andy Warhol Foundation for the Visual Arts, Inc.

As the preeminent American artist of the 20th Century, Andy Warhol challenged the world to see art differently. Since its founding in 1987 in accordance with Andy Warhol’s will, The Andy Warhol Foundation has established itself as among the leading funders of contemporary art in the United States having distributed over $275,000,000 in grants supporting the creation, presentation and documentation of contemporary visual arts, particularly work that is experimental, under-recognized or challenging in nature. The foundation’s ongoing efforts to protect and enhance its founder’s creative legacy ensure that Warhol’s inventive, open-minded spirit will have a profound impact on the visual arts for generations to come. Proceeds the foundation receives from licensing projects such as this contribute to the Foundation’s endowment from which it distributes grants. For more information please visit www.warholfoundation.org.

Andy Warhol (1928-1987) remains one of the most influential visual artists of modern times. With a background as a highly successful commercial artist, Warhol reinvented himself as a famous Pop Artist. Warhol went from creating images for advertising and media as an illustrator to using advertising and media images to make his fine art. He quickly became renowned as one of the artists who defined the Pop Art movement, a generation of artists who turned to the worlds of mass commercial production, advertising, and popular culture for the raw materials and inspiration for their work. Incredibly prolific in various endeavors, Warhol is recognized as one of the most influential avant garde filmmakers of his generation, founded Interview Magazine in 1969, produced and managed The Velvet Underground, authored numerous books, was an avid photographer, directed music videos and even hosted his own talk-show on MTV, Andy Warhol died unexpectedly in February 22, 1987 firmly established as one of the most important artists of the 20th century, artist and international celebrity.