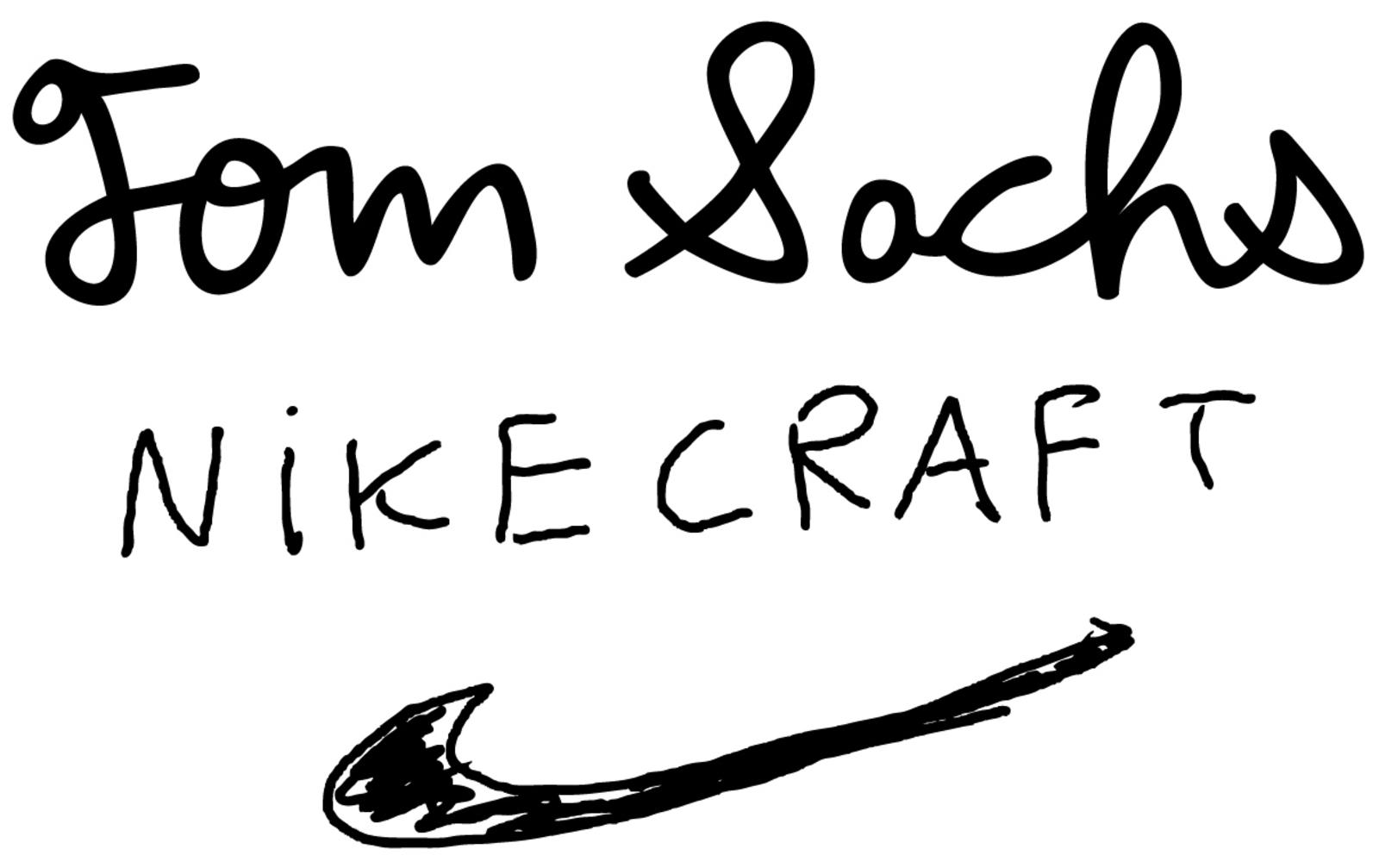 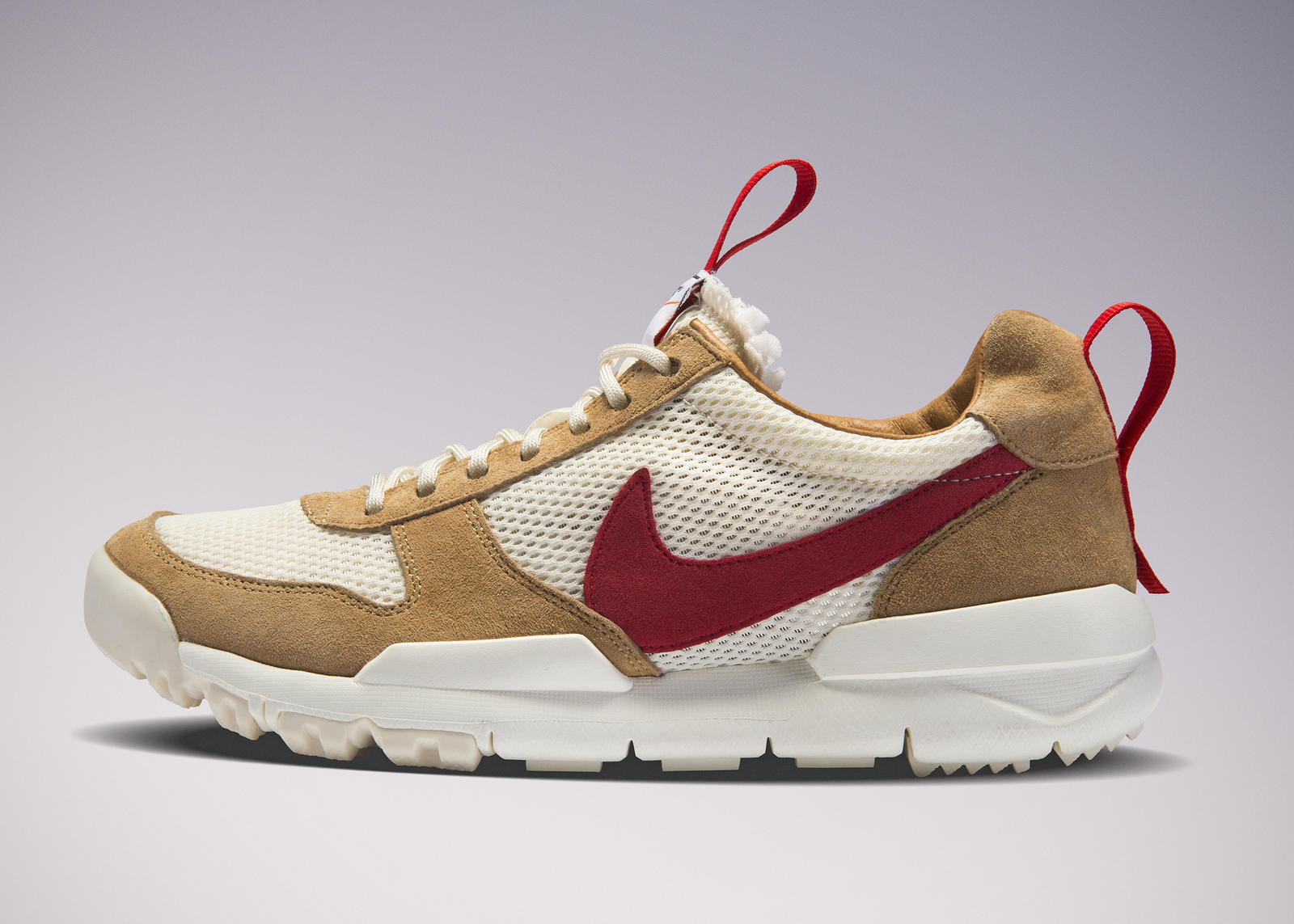 In May 2012, Nike and artist Tom Sachs partnered to release the NikeCraft Mars Yard, a shoe inspired by Sachs’ interactions with NASA’s highly specialized scientists, and designed as high-performance equipment for the building of his SPACE PROGRAM 2.0: Mars exhibition (mounted at the Park Avenue Armory in New York City). Just five years later, the NikeCraft Mars Yard shoe will re-launch in 2.0 form with a material update informed by Sachs’ long-term trial of the original that revealed an unknown.

“It passed the abrasion test. It passed the strength test. It passed the folding test. It passed all the tests, but when we started using it, it didn’t meet our expectations,” explains Sachs. “It's not until you really wear something and realize…We used a new material, and we expected better.” Even though Vectran is lighter and stronger than typical polyester fabrics, it's susceptible to failure on fatigue.

Guided by Nike designers, Sachs took the next five years to test the shoe, during which he learned things one could only learn through thorough daily use. The result was a new, improved NikeCraft Mars Yard 2.0, and its build is indicative of the design ethos shared by Sachs and Nike: Working to advance human potential, we believe there is no finish line.

Over those five years of wear, Sachs discovered the limitations of the initial NikeCraft Mars Yard build and worked with Nike designers to improve upon its durability. On the upper, the Mars Yard 2.0 replaces the original Vectran with a polyester warp-knit tricot mesh (a more breathable material that induces fewer internal hotspots — not sexy, but honest). The shoe’s red donning straps are now adhered with a stronger X box stitch. On the outsole, the tread of the SFB, originally protruding for use in the desert-like Mars Yard, has been inverted for more appropriate wear in urban environments. Finally, the Mars Yard 2.0 comes with two insoles, mesh and cork (which is optimal for sockless wear). 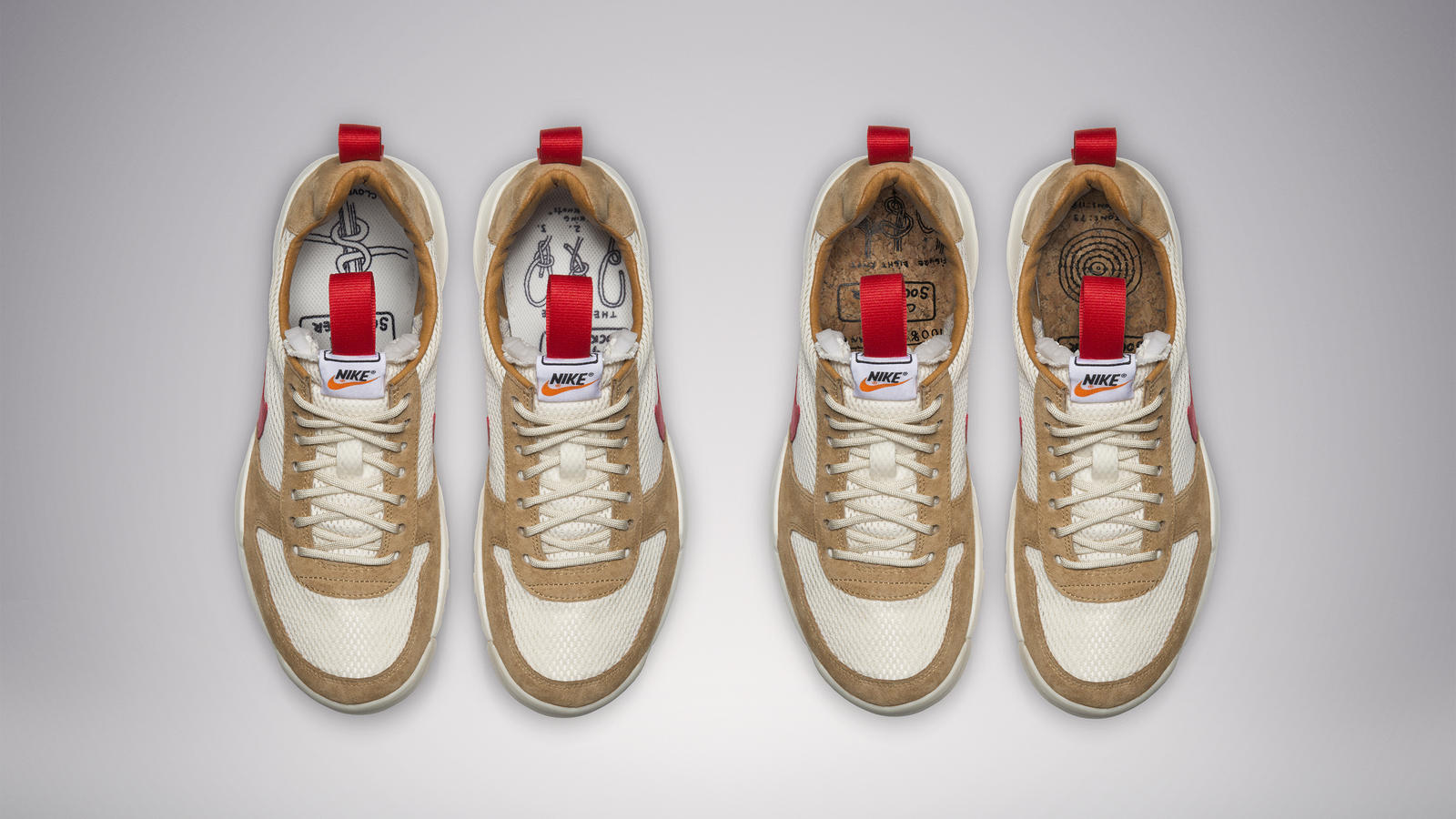 The mesh sockliner (left) is illustrated with knot-tying tools. The cork sockliner has drawings that nod to elements in the universe.

The shoe is thus the result of continuous adjustments — a common circumstance of Sachs’ work. In fact, nothing Tom Sachs makes is ever finished. That philosophical premise is buoyed by the practicalities of his art practice — every screw, seam, stitch and joint remains exposed. These reveal Sachs’ complete embrace of showing his work, not only physically but also in the intellectual underpinning of how an object (Sachs gained fame as a sculptor, reimagining modern icons, but now works with a variety of media) came into being.

Sachs’ interest in everyday materials is evident in the NikeCraft Mars Yard 2.0 and its predecessor. The materials are largely employed in their natural state — no dyes — with Sachs’ flourishes (his signature) coming in the red pull-tabs and Swoosh.

“I have always embraced flaws. The natural polyurethane midsole shows wear. The shoe shows evidence of experiences, even the little bits of tongue that may flake off are like forensic bread crumbs,” notes Sachs. “People wear their scars with pride, so that's another reason why we don't polish the materials away — it’s storytelling. Rock your shoes dirty to say, 'I wear my shoes. I do things with my life. Behold the evidence of my actions.'”

In this spirit, the NikeCraft Mars Yard 2.0 releases in conjunction with the Nike and Tom Sachs’ Space Camp, a unique consumer experience based on Sachs’ studio practice.

“People wear their scars with pride, so that's another reason why we don't polish the materials away — it’s storytelling.”

A day in the life of Tom Sachs’ studio begins with a strong cup of coffee and a series of drills. Some are serious physical feats — calisthenics and physical strength building such as push-ups and deadlifts — while others are tests of extreme manual dexterity like knot tying and drawing a straight line. Together, the drills function to free the group from external distraction and focus the body and mind to the task at hand. For members of the studio, the task is building sculpture.

“We started doing this because I noticed that as some people in the studio were getting older they were beginning to demonstrate the same physical symptoms of wear and tear that I had, and I was hoping to protect the young men and women who lay down their lives for our work — I didn't want them to have bad backs,” says Sachs, who began following Pat Manocchia's five essential exercises (deadlifts, lunges, chin-ups, push-ups and sit-ups) in 2005. “Our space camp strengthens our bodies so they can be a solid foundation to make difficult decisions with our minds. We do this three days a week.”

Nike and Tom Sachs’ Space Camp brings elements of this studio routine to life through a series of mental and physical obstacles.Testing mind, body and character, the experience forms a routine that can be easily integrated into daily life. 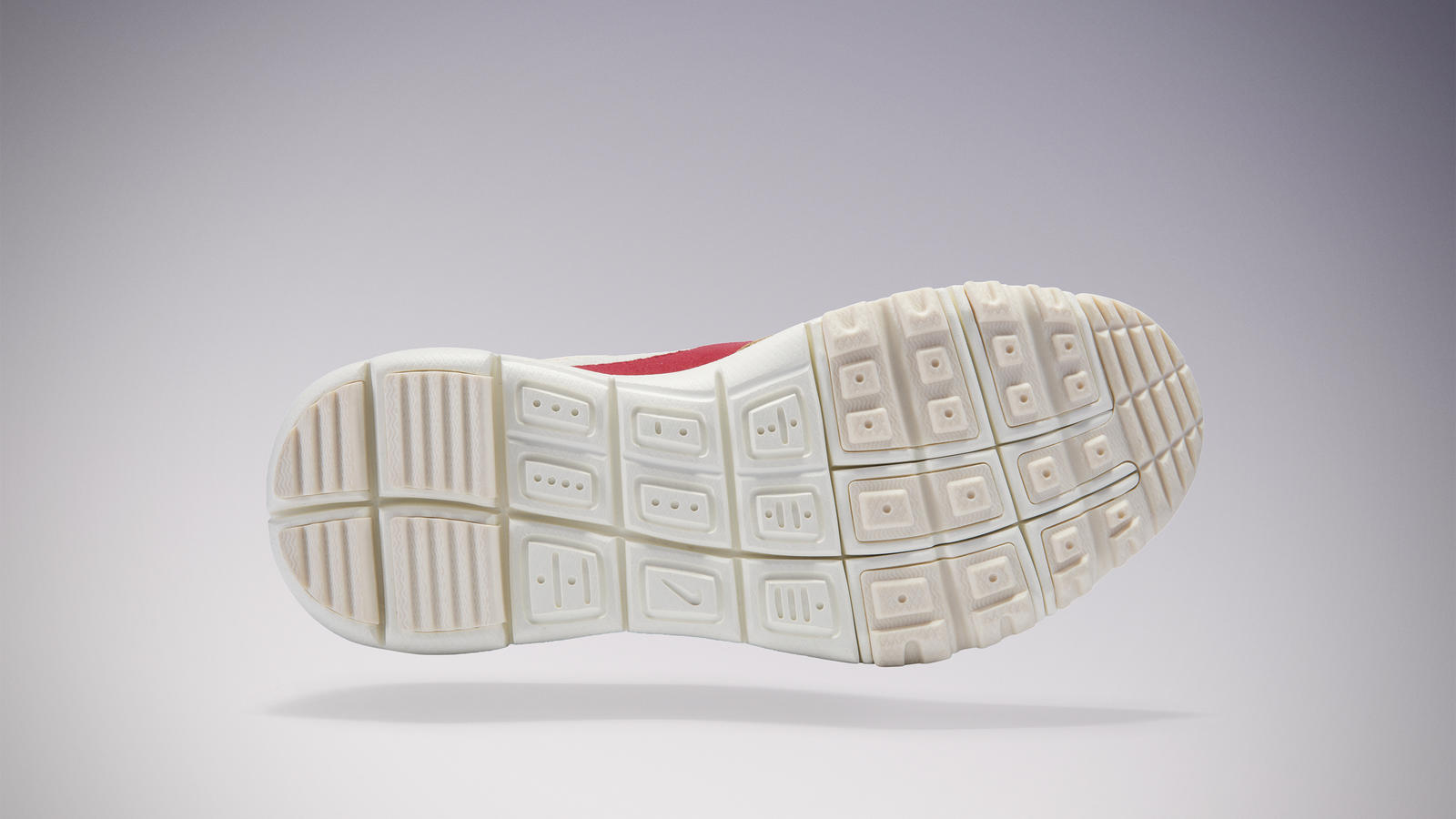 The tread of the NikeCraft Mars Yard 2.0 has been inverted for more appropriate wear in urban environments.

Rewarding those of intrepid spirit and doggedness, completion of the course (which lasts one hour and is meant to be accessible for all levels of ability) opens early access to purchase the NikeCraft Mars Yard 2.0.

The first Nike and Tom Sachs’ Space Camp opens on June 8 in New York, with an additional camp in London over the course of the month. Learn more at NikeCraft.com.

Sachs’ relationship with Nike plays off the artist’s intense curiosity. “Any project is an opportunity to learn,” he says. Sachs worked with Nike formally for the first time in 2009, as a contributor to the STAGES exhibition, benefiting cancer research. Five years later, the brand collaborated with Sachs on Space Camp 2.0: Mars, an exhibition exploring the physical and fitness demands of space travel through the artist’s unique lens. The project realized a number of innovative Nike products, including the Mars Yard shoe, as well as setting a base for continued evolution of the central idea.