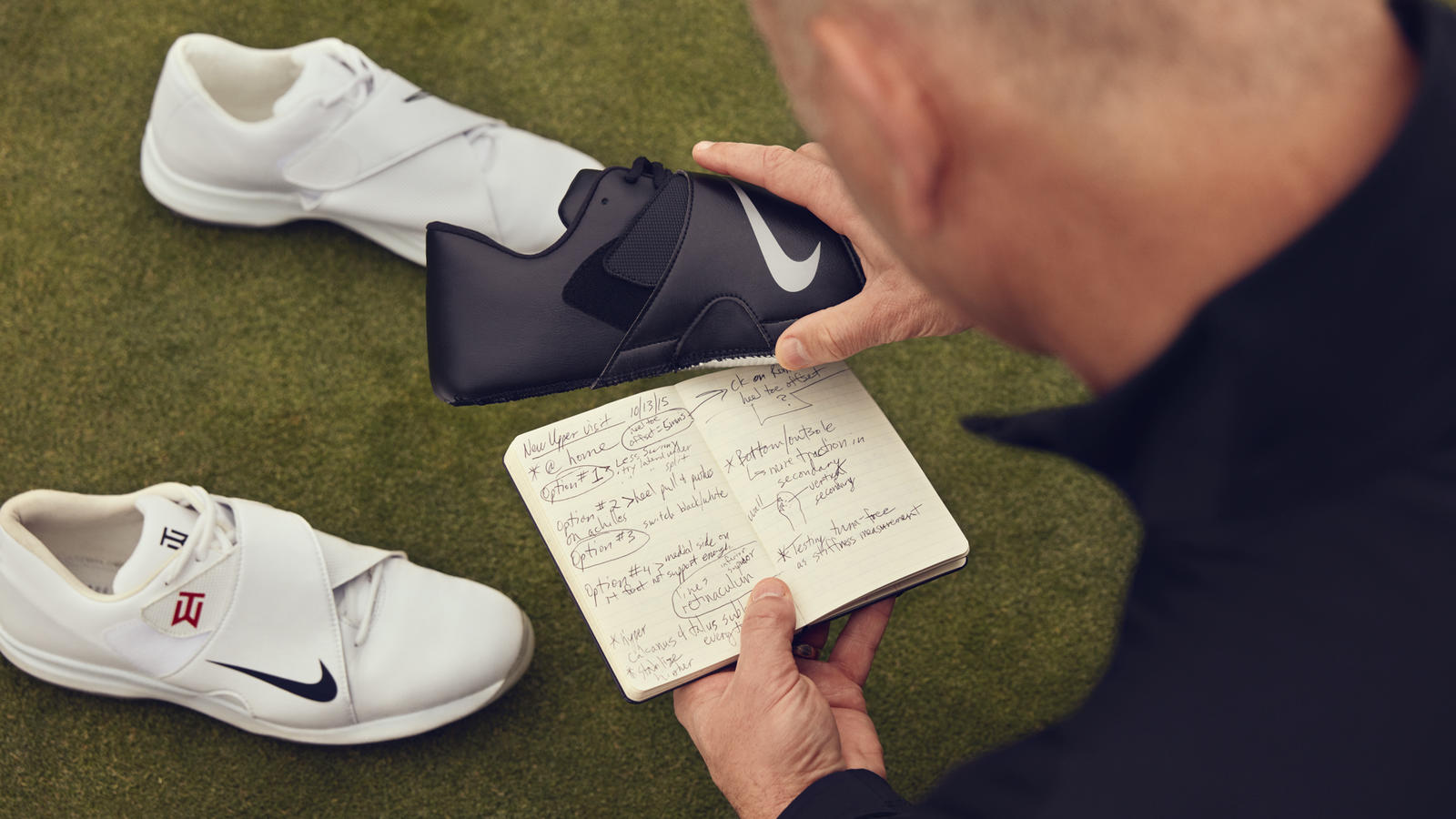 How is working with Tiger unique?
The thing about Tiger is he actually wants to learn the language of footwear design. He wants to use that same language because he knows that helps the design and development process. I can talk to him like I’m talking to another designer. I really like that about him and appreciate it because he wants to understand.

How was working on this shoe different than the previous shoes you’ve done with Tiger?
When I first started with him in the TW ‘13 he really wanted to start completely over with his shoes. He didn’t want the same spike placement; he didn’t want the same stiffness. So, when I brought him a prototype, he had to evaluate everything all at once. That makes it more difficult to understand it and judge it fairly … not easy to do for anyone. For example, when he’s swinging should he think about the upper, the traction or the spikes? Most of the time he’s trying to think about it all at once. Then he’ll say something about the upper and I’ll say ‘OK, great but what about the traction, because you’re evaluating that too. And what about the flexibility?’ And on top of that he was trying to play on Tour. It was really one of the most difficult and challenging things I’ve had to do here at Nike because it was a whole new approach to creating an entirely new shoe, all while the athlete is also competing.

Working on the TW ‘17 is the first time that we’ve been really been able to focus in on every single aspect in a singular fashion. Things are pretty much dialed in. It’s the first time we’ve come into the season as close to one hundred percent dialed on footwear since I’ve been working with him. 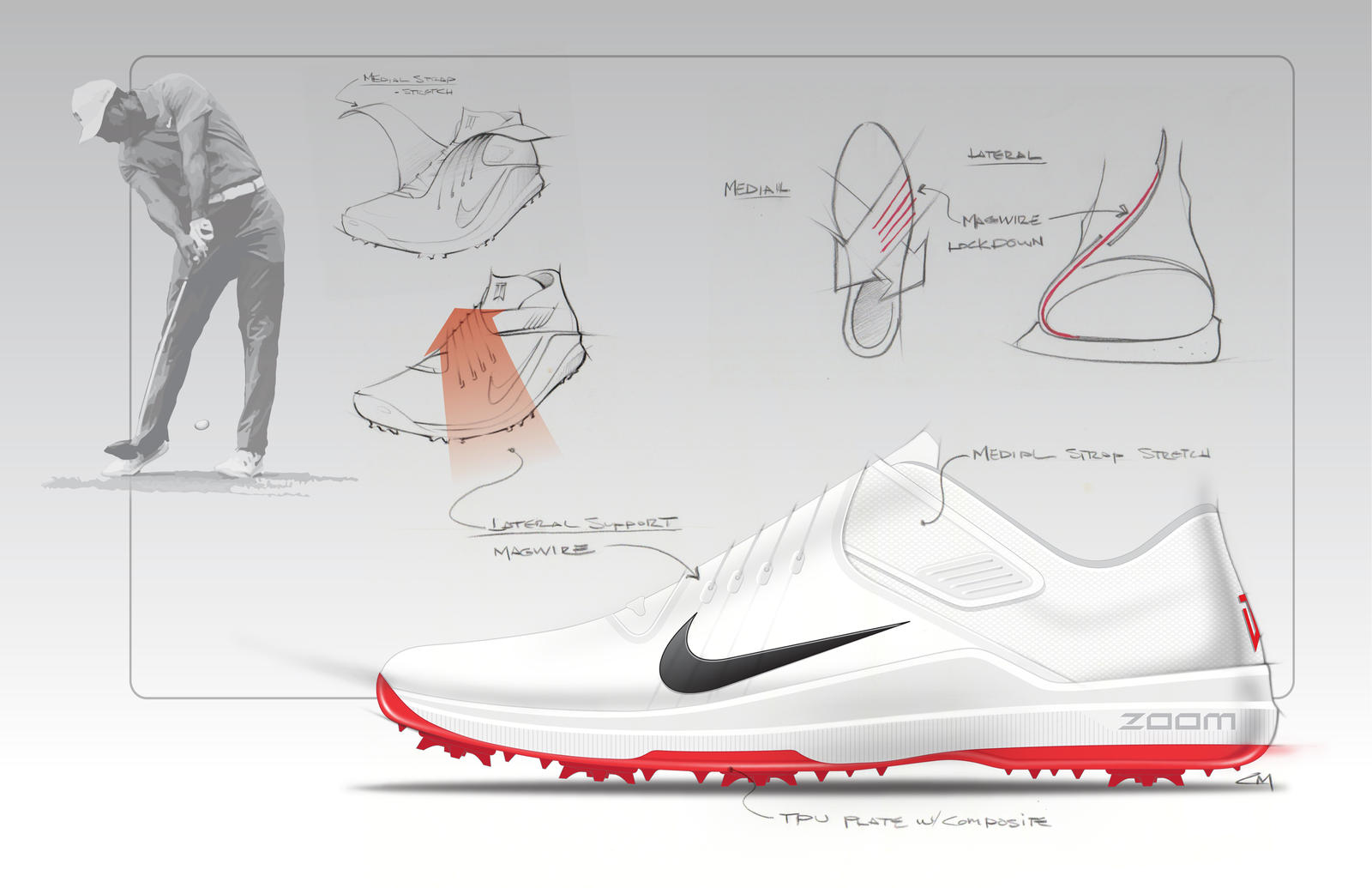 How did you approach the creation process for this shoe?
First, we started with the upper, which most times we don’t. Then we dialed in the plate itself or the spikes and then we worked on its stiffness. This process allowed us to design the TW ‘17 one piece at a time.

At Nike WHQ, I worked with Carl Madore (Innovation Design Lead for Nike Golf Footwear) and Jenny Monnot in pattern engineering. I told them, ‘I didn’t know what the best configuration is going to be for golf but this is what we should do: Let’s make a blank upper with just simple white synthetic upper.’ That was our canvas. We made eight or nine of them, and then drew on them and came up with a few configurations that could work. Next we went back to Jenny and actually added the straps to that initial upper. That was our process. By the time we went back to Tiger, where he hit in the shoes, we had whittled down from eight configurations to five.

Once the upper was dialed, we started working on the bottom. A lot of times you want to start with the bottom. We did it backwards this time because the upper became the focal point after listening to Tiger.

Designing the plate is usually the longest process and can be the longest thing to get right. An upper you can cut in a couple days, but with the bottom you have 3D files on the plastic and midsoles and foams. It can easily take six weeks just to make!

Were there any big hurdles or challenges to overcome when creating this shoe?
The upper was the focal point because Tiger had his new swing that was now right-leg dominant. We needed something to help contain his feet as he was trying to be more explosive. That was our biggest hurdle. Then once we landed on the strap system, a major challenge was getting the angles for the straps correct and having them lay down flat was really difficult. Carl had the idea of attaching the lateral or outside strap to the section of the upper that covers the front part of the foot. That took care of a lot of the issues and just really cleaned it up too. And Tiger liked that a lot. It just felt better for him.

How did Tiger react when he first heard you explain the strapping system idea?
We were having dinner at Greenbier, and as we were talking about his new swing and his needs for the upcoming year I drew a tiny little sketch. When he was done talking, I turned my little black notebook over to show him the sketch. I had drawn an x-strap. He took a little bit of a pause and said, ‘I could see that.’ He totally understood it and was on board. ‘Of course,’ he said, ‘like anything, I’ll just have to try it to see if it does work.’

The Nike TW '17 is available April 1 on nike.com and at select retailers. For more on the development of the TW '17 with Tiger Woods and Tobie Hatfield refer to news.nike.com.