The Nike ZVEZDOCHKA: The Future Returns

In a word, the Nike ZVEZDOCHKA is different. 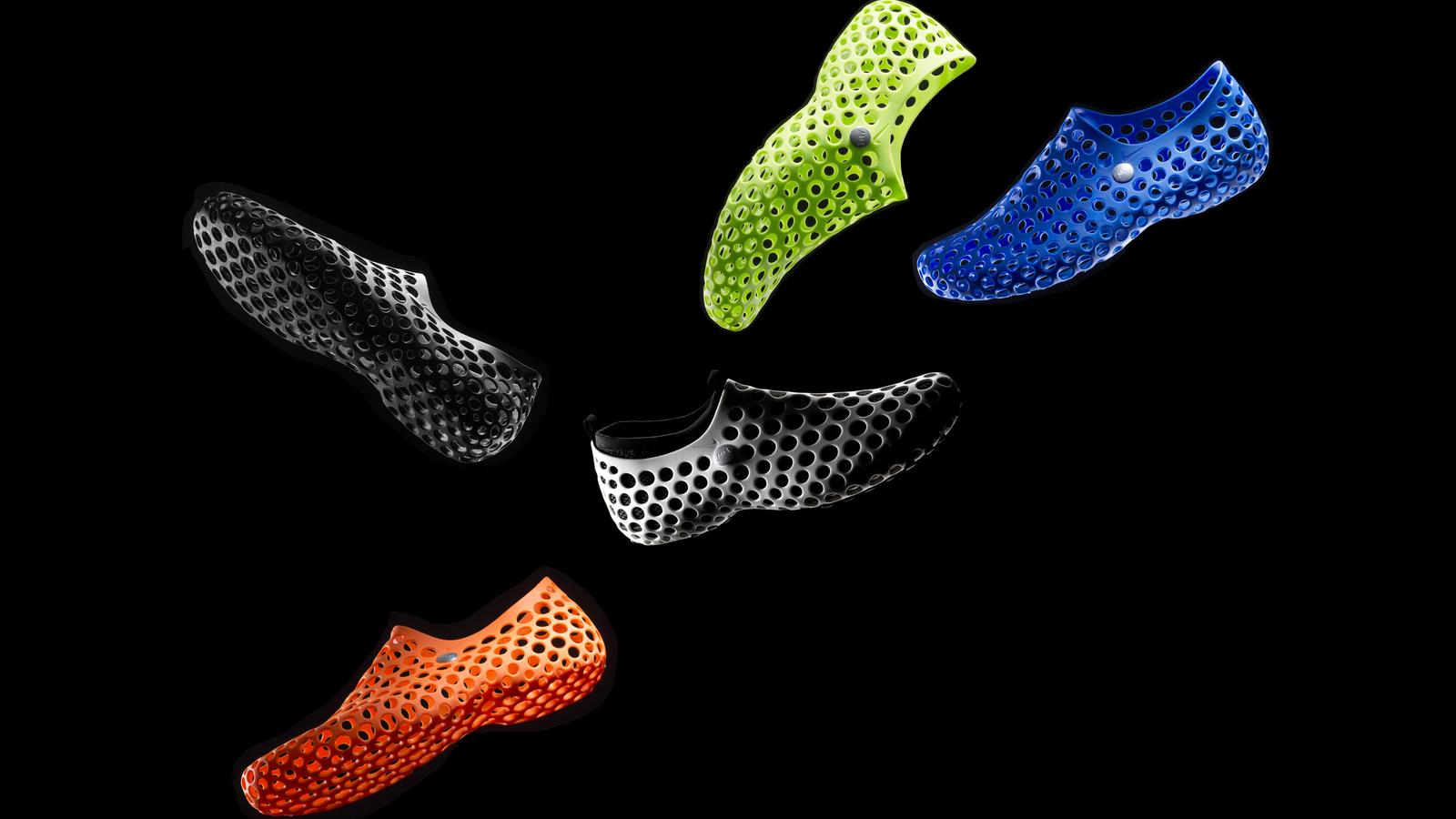 First landing on shelves in 2004, the space-inspired shoe with an unheard-of aesthetic sparked captivation and curiosity.

It was bold and sophisticated. It was comfortable and versatile. Both a shoe and a piece of art, the unusual multi-piece construction ignited widespread conversation.

At Nike, the lasting effect of that thrilling moment in time is still felt. Raising new questions drives innovation, and the ZVEZDOCHKA was certainly no exception. It tested the fundamentals of shoemaking and fueled what remains an ongoing dialogue around customization and sustainable design.

“Often when you enter into a project, you don’t know what you’ve learned until you start the next one,” says Mark Parker, President and CEO of NIKE, Inc. “For the ZVEZDOCHKA, we knew we had broken new ground: a shoe with four interchangeable parts. It was such a simplified process and led to new exploration in how products are made and the potential for customization. It’s a great example of how a functional innovation helps drive a completely new aesthetic.”

To honor the 10-year anniversary of the ZVEZDOCHKA, Nike will in late December re-release the shoe in its original five colorways at select NikeLab retailers and on nike.com/nikelab. The revival will pay tribute to a collaboration that was anything but ordinary. 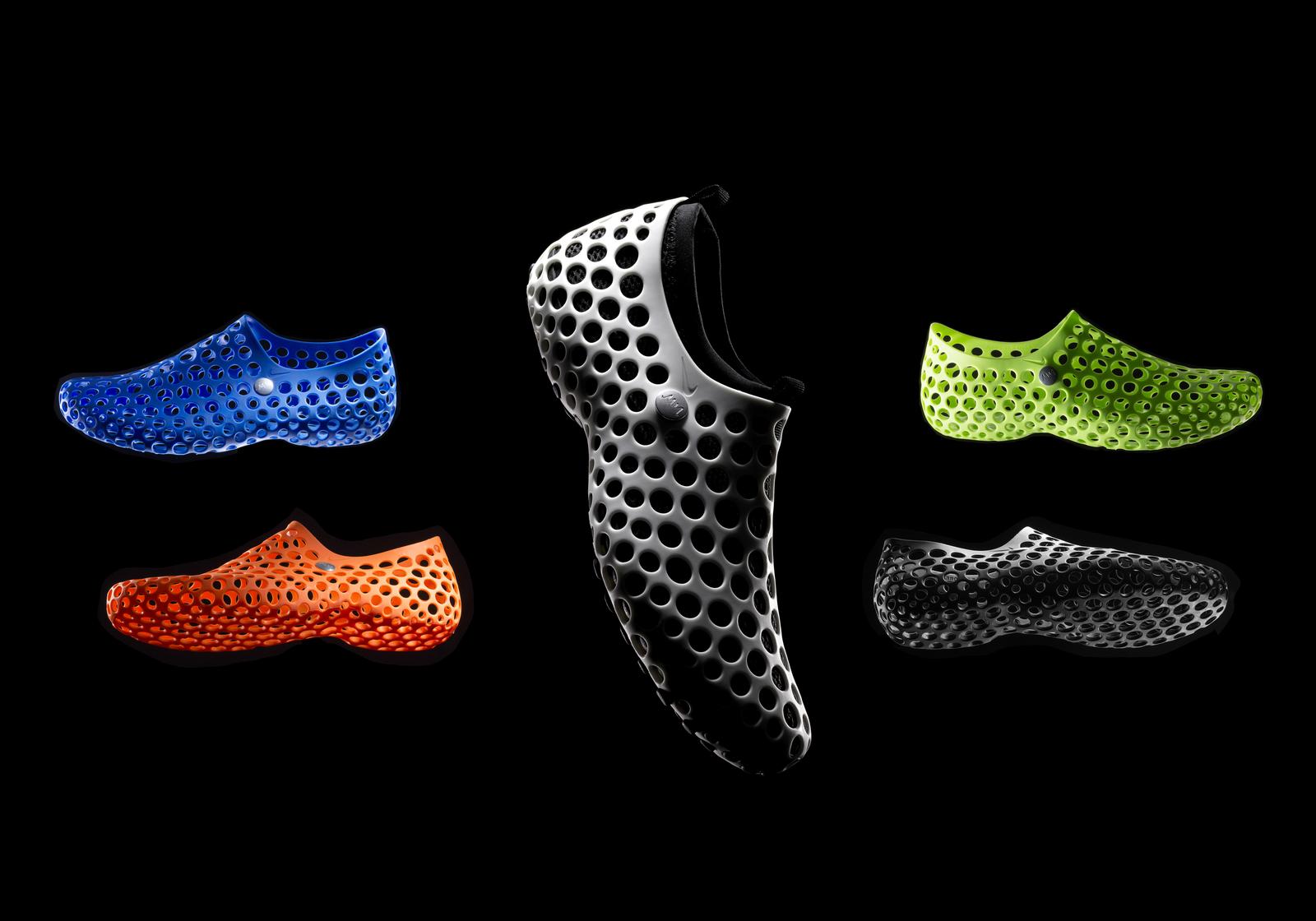 The Nike ZVEZDOCHKA will be available in the shoe's original five colorways.

Nike has a rich history of collaborating with external creative partners. Through a process of mutual learning, Nike and its invited collaborators inform and enhance the design process. In the case of the ZVEZDOCHKA, famed industrial designer Marc Newson proved to be the ultimate partner.

“Marc’s problem-solving approach to design is similar to ours, so working together came very naturally to both of us,” Parker says. “As we began discussing the project, we turned our focus to an unexpected area – the process of traditional shoemaking. That’s when we started exploring new territory and saw the potential for this project to be about more than just a new shoe.” 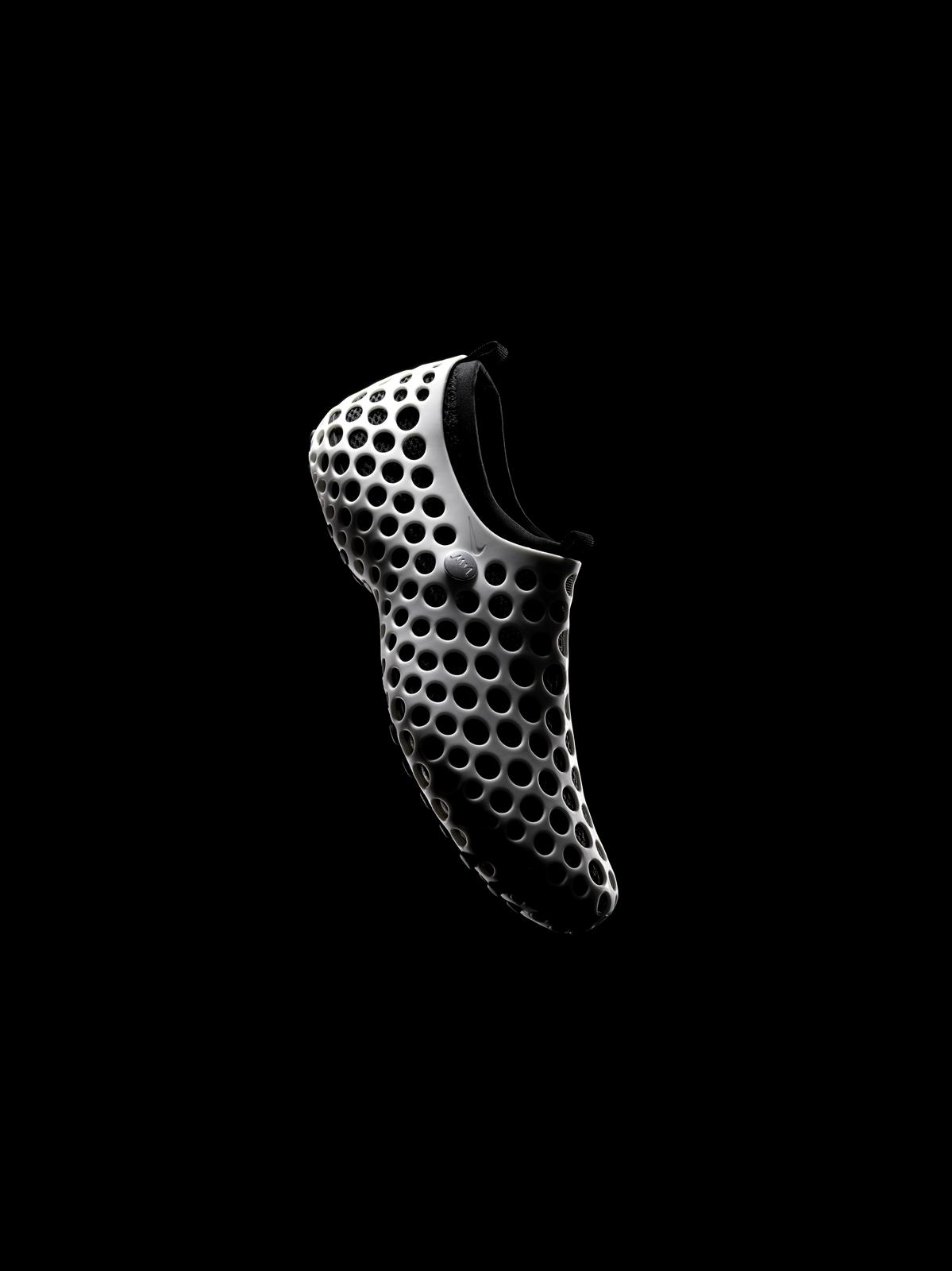 The shoe’s original concept was inspired, fittingly, by the ultimate unchartered territory.

“From a functional point of view, my experience at the Russian Space Agency intrigued and inspired me to develop a multi-purpose shoe for cosmonauts,” Newson said at the time.

This space connection even extends to the shoe’s nomenclature. The ZVEZDOCHKA is named after a Russian space dog launched into orbit aboard Sputnik 10 in 1961.

The ZVEZDOCHKA was the result of landmark engineering. Modeled entirely on a computer, the shoe featured a modular design. Four interlocking, interchangeable parts were constructed: the outer cage, the interlocking outsole, the innersleeve and the insole. These parts could be worn in multiple combinations, together or separately, for diverse functions and environments. 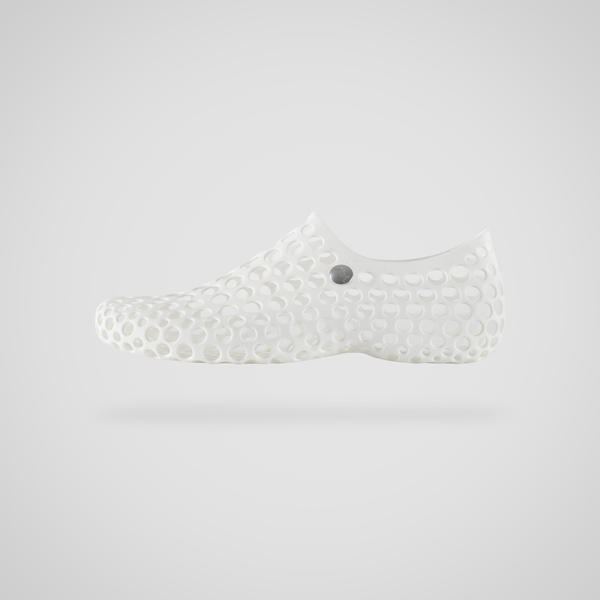 The ZVEZDOCHKA's breathable perforated cage forms the base for the interlocking parts. 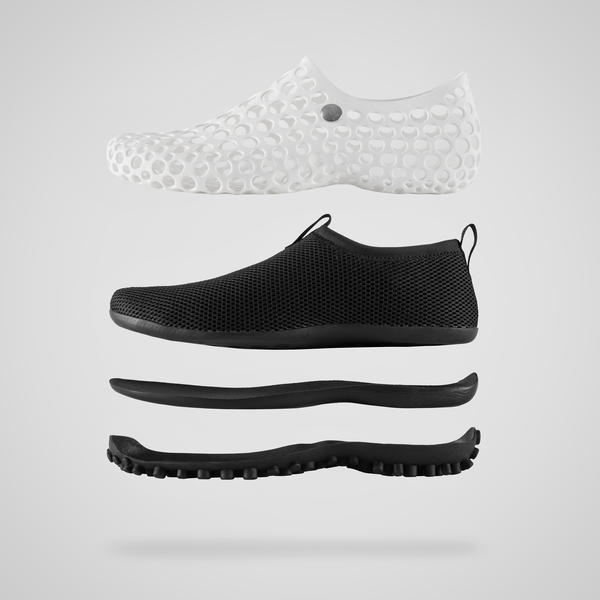 The ZVEZDOCHKA features four interlocking, interchangeable parts: the outer cage, the interlocking outsole, the innersleeve and the insole. 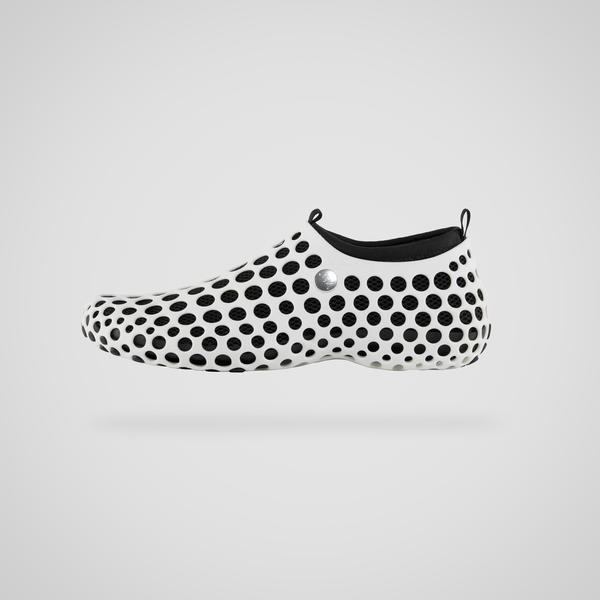 Modeled entirely on a computer, the ZVEZDOCHKA features a modular design.

The breathable perforated cage formed the base for the interlocking parts. Fitting the foot like a second skin, the innersleeve was crafted with flexible and resistant materials to cover the foot and help protect it from the elements. The interior sock liner featured a Nike Zoom Air unit in the heel for added cushioning. And the interlocking outsole snapped into the perforated cage to create the foundation of the shoe. 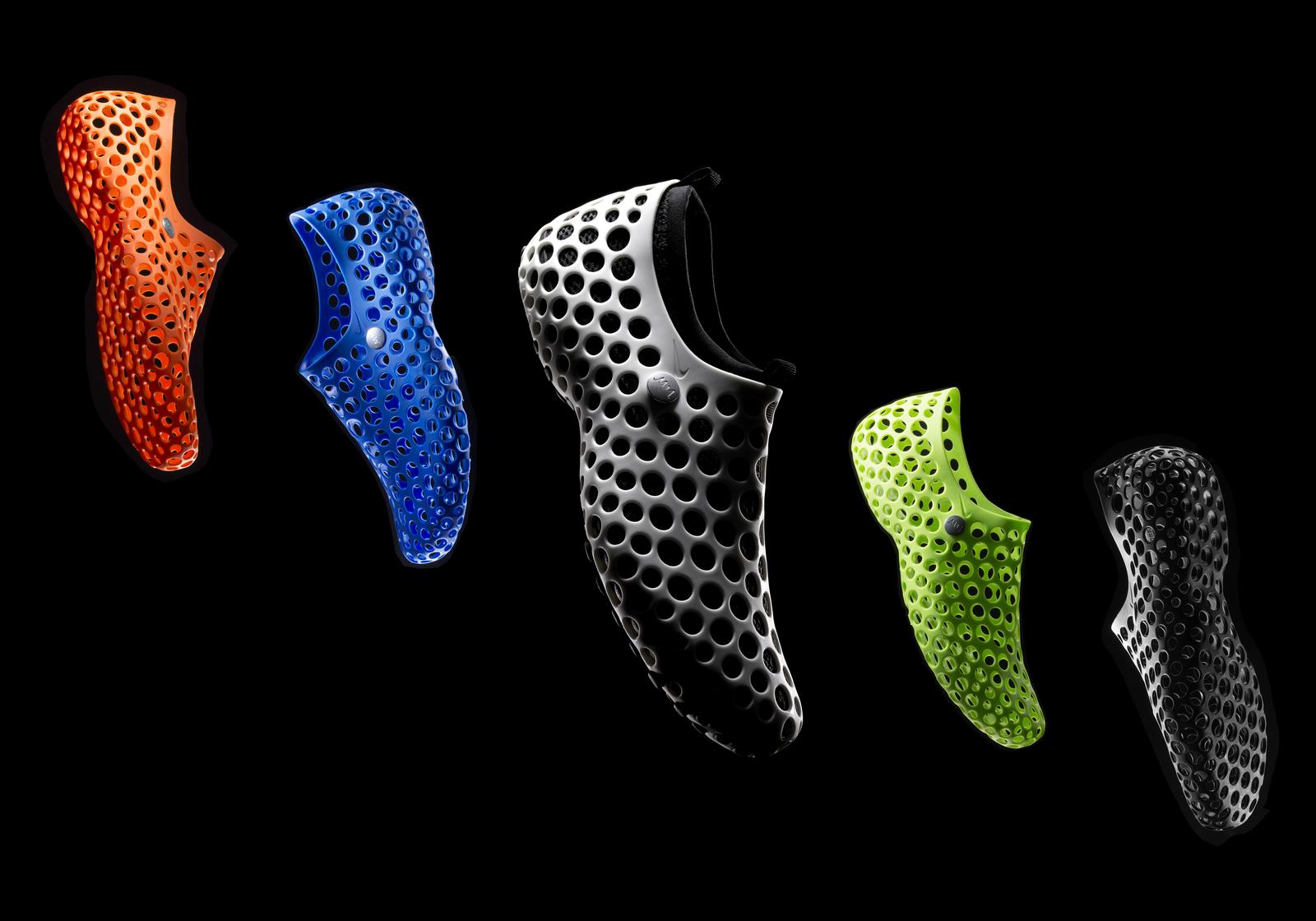 The ZVEZDOCHKA became a point of genesis for sustainable design at Nike. It adhered to the Nike Considered Design ethos, which included a commitment to reducing waste throughout the design and manufacturing process. Notably, the concept of interlocking parts freed the shoe from many of the adhesives needed in traditional footwear. Marking one of the company’s first attempts at closed-loop product – the concept in which a product is infinitely recyclable – the ZVEZDOCHKA was a window into the vision of a more sustainable future.

The ZVEZDOCHKA’s influence at Nike today is perhaps best felt in this arena of sustainable innovation. The shoe encouraged new thinking and served as an accelerant to Nike’s pursuit of lightweight, minimal and sustainable product.

A decade has passed since the launch of the original ZVEZDOCHKA. Recently, Mark Parker and Marc Newson reflected on the project.

The ZVEZDOCHKA represented an entirely new method of shoe construction. It challenged convention. Why is upending the status quo important in design?

"Sometimes you need to disrupt and create new models to affect meaningful change. We could not make the ZVEZDOCHKA with traditional cut-and-sew methods of making footwear. But we also didn’t anticipate the original idea would take us in that direction. Sometimes it’s about asking the right questions in the right moment with the right tools in hand.

"I like to think there’s always a balance. You don’t always have to start over to create an emotional reaction to your product. It’s always powerful to deliver a breakthrough, but there’s also a true art to making something great even better."

"For me as a designer, it is vital always to push boundaries — to look to the future and think about how things will be. Otherwise you are irrelevant. For me, design is always about exploring possibilities with new technologies, processes and materials. Often cross-pollinating between industries."

How will the ZVEZDOCHKA continue to influence design, be it at Nike or elsewhere, moving forward?

"The principles of the ZVEZDOCHKA have the power to unlock many exciting opportunities at Nike – from customization and modularity to sustainability and manufacturing.

"Design is an iterative process. One idea often builds on another. Looking ahead, I’m energized thinking of the opportunities provided by customization and modularity. Of course, in terms of sustainable design, the ZVEZDOCHKA’s influence will continue to be deeply felt. The shoe removed constraints for a sustainable future. This will always be a goal of ours."

"In general terms, the influence has been and will continue to be more about approaching design problems from a different standpoint. In this case, a piece of footwear being seen as a product rather than a garment, both in practical and philosophical terms." 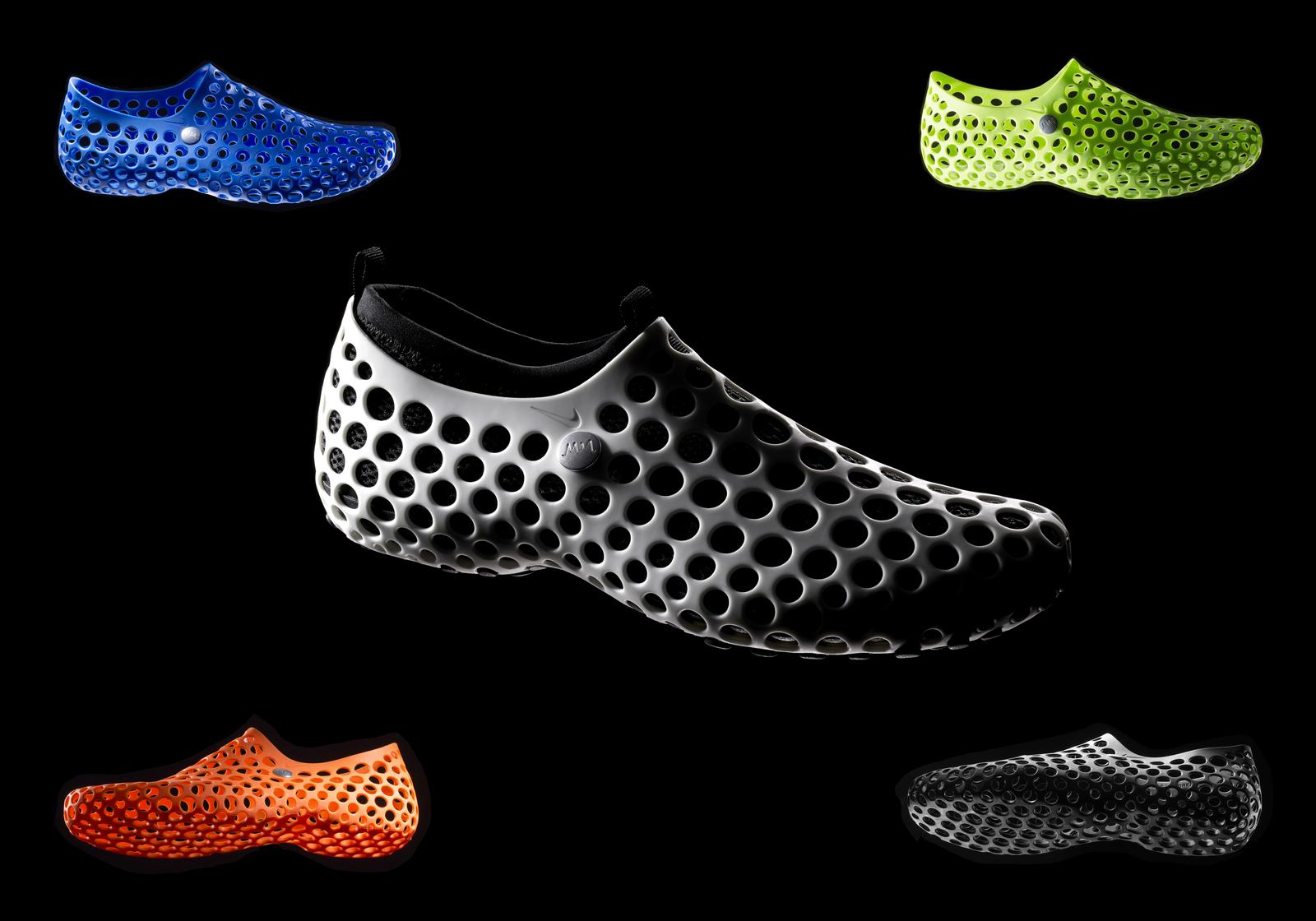 The Nike ZVEZDOCHKA will be available on nike.com/nikelab and in select NikeLab locations beginning Dec. 29.