The Magic Behind the Nike Air Presto 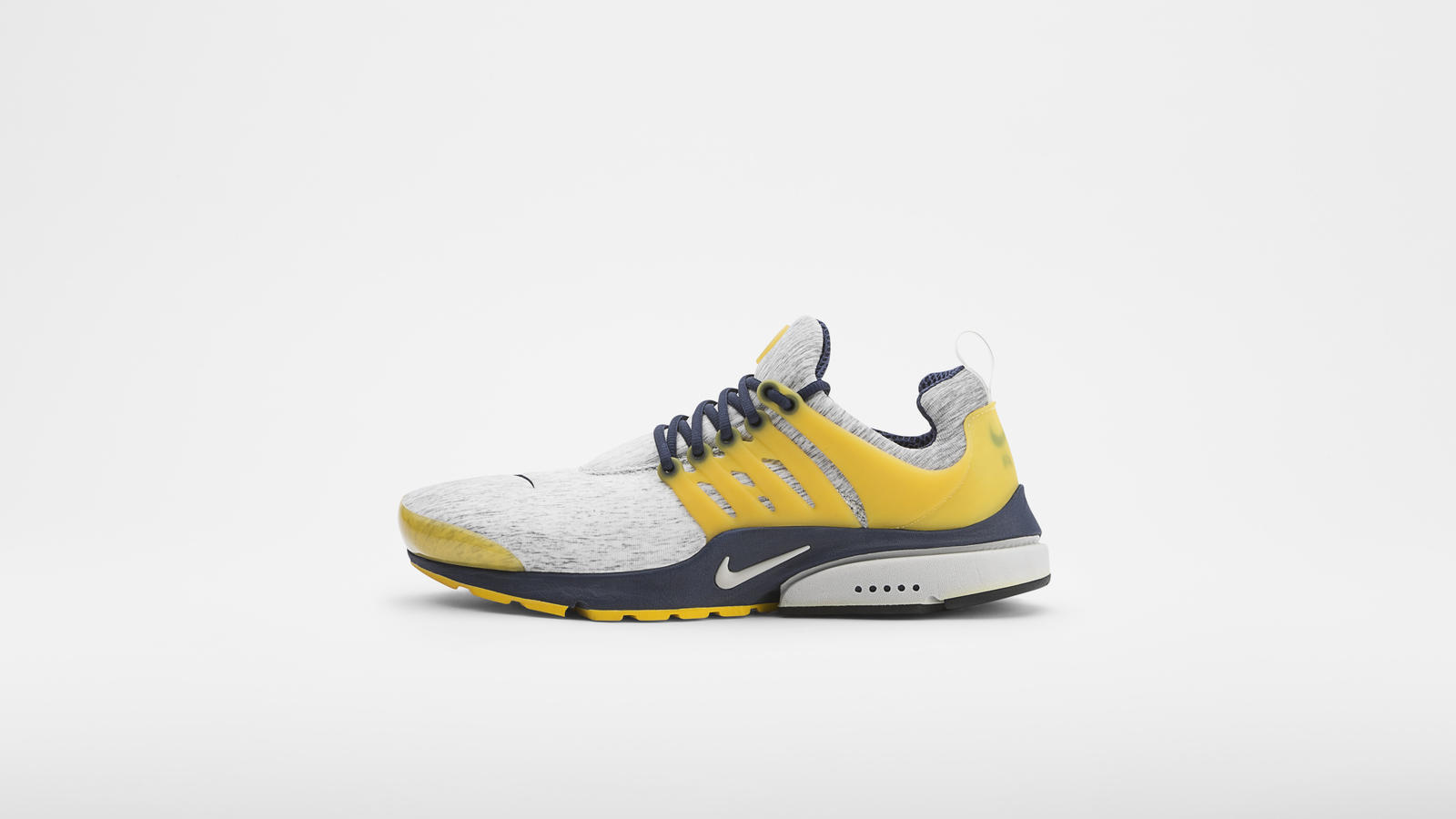 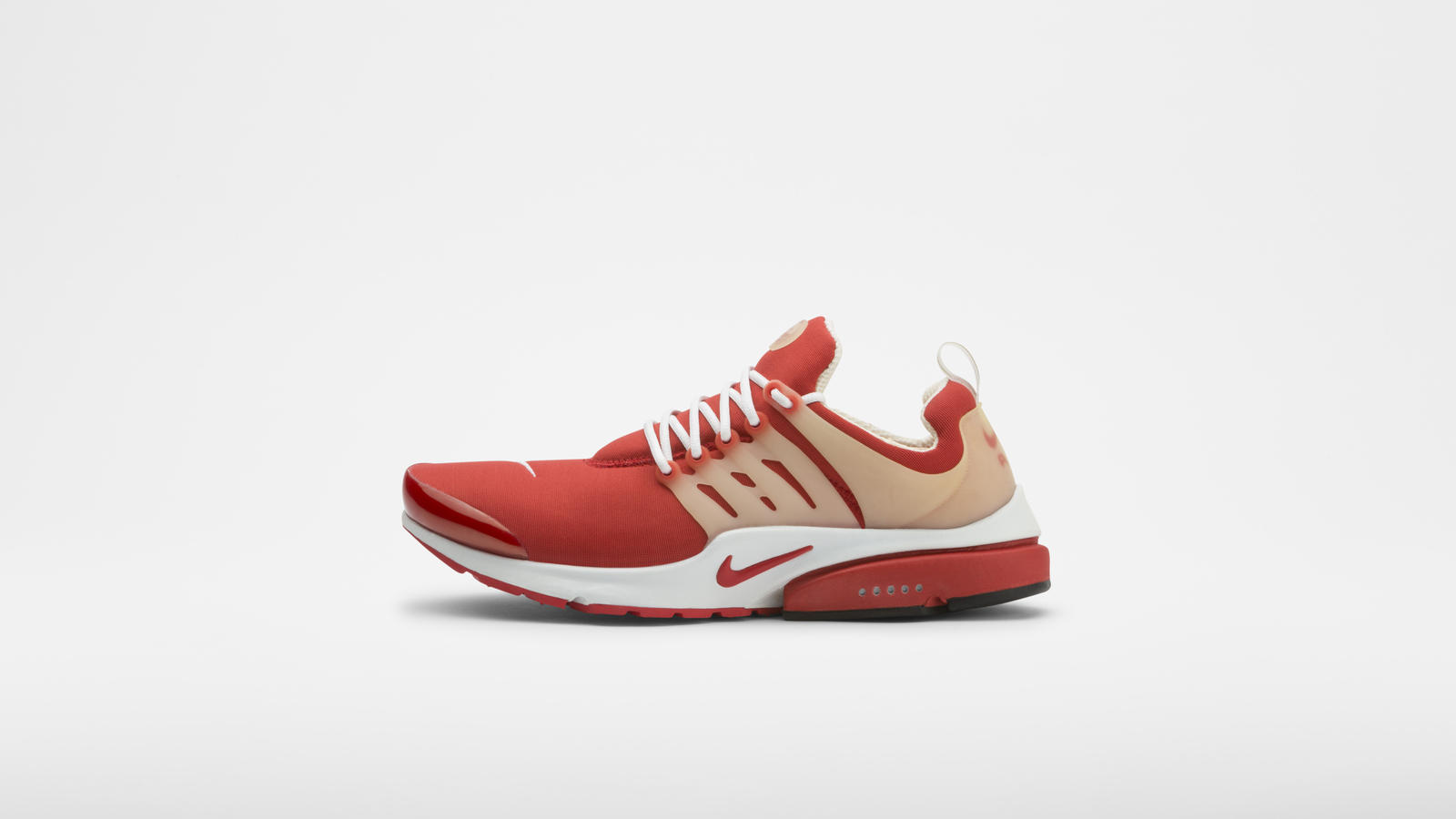 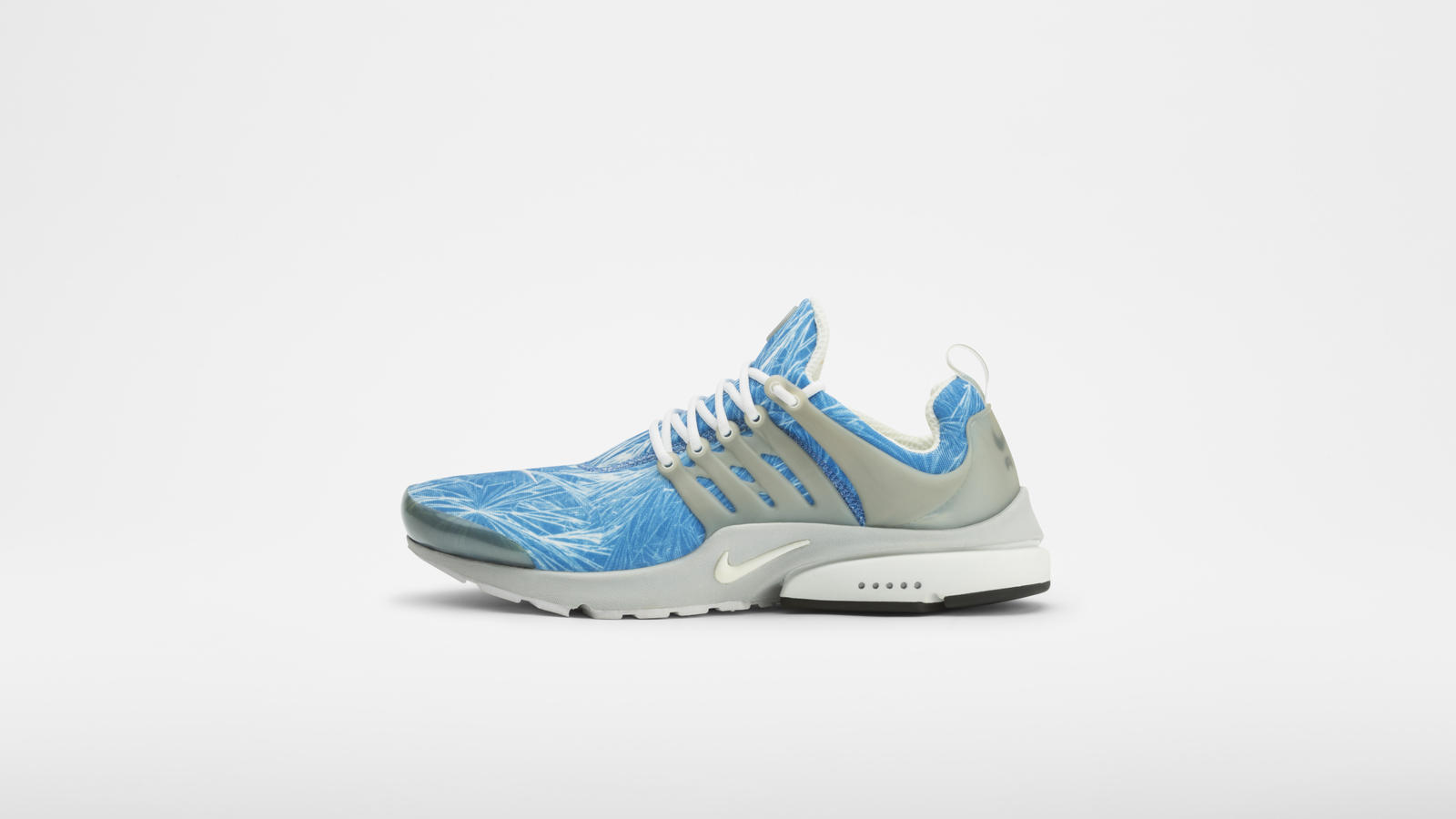 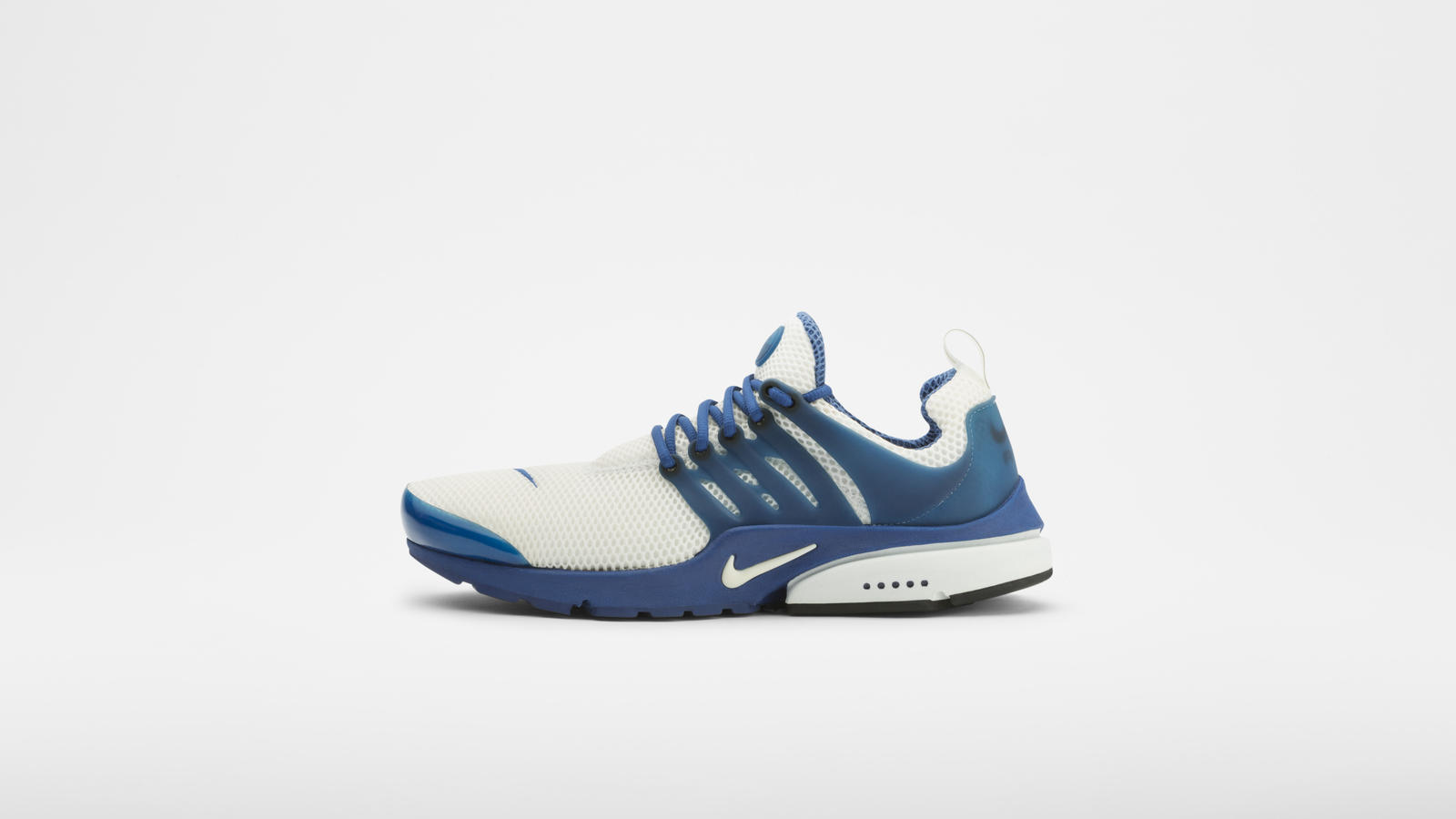 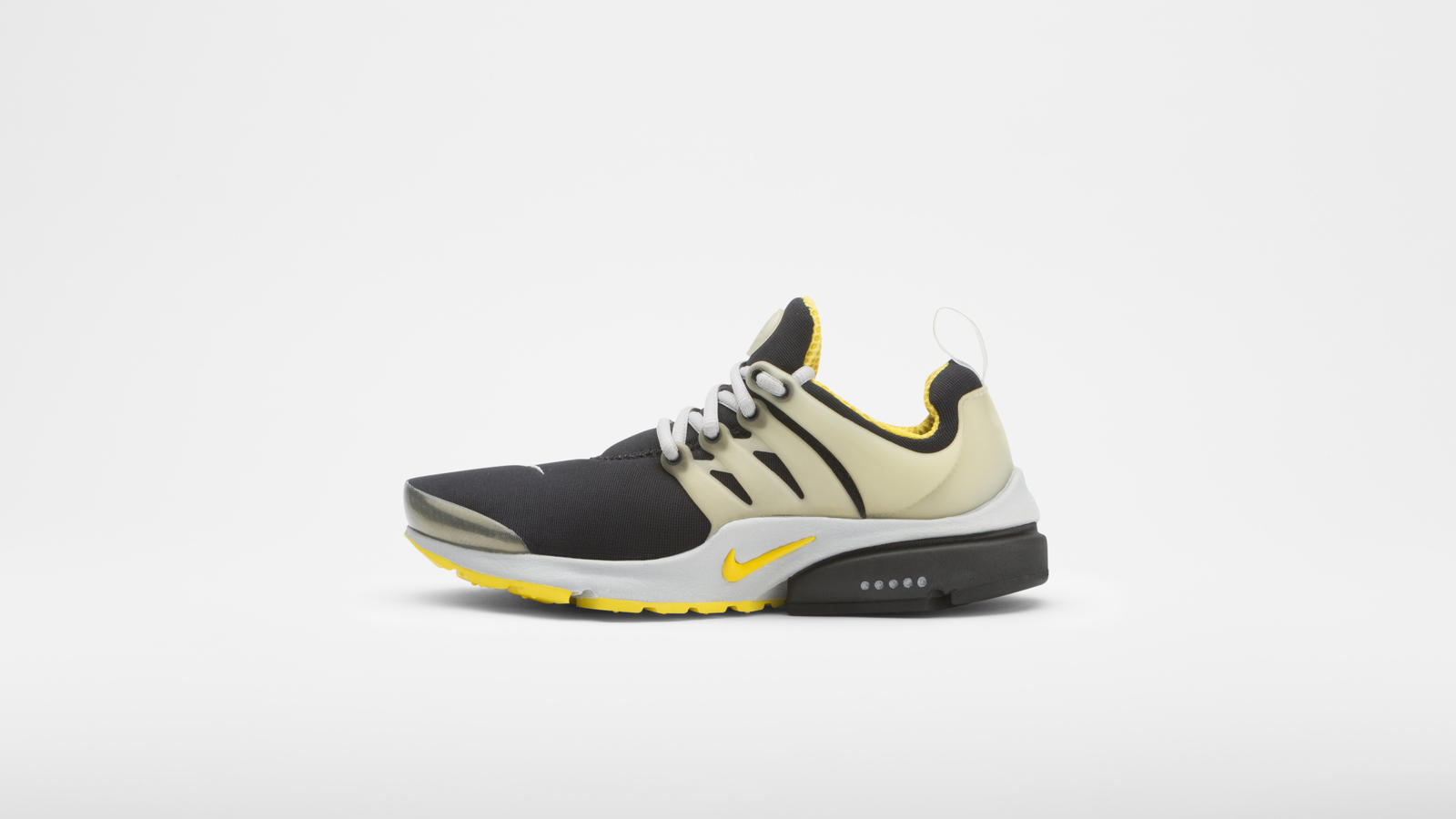 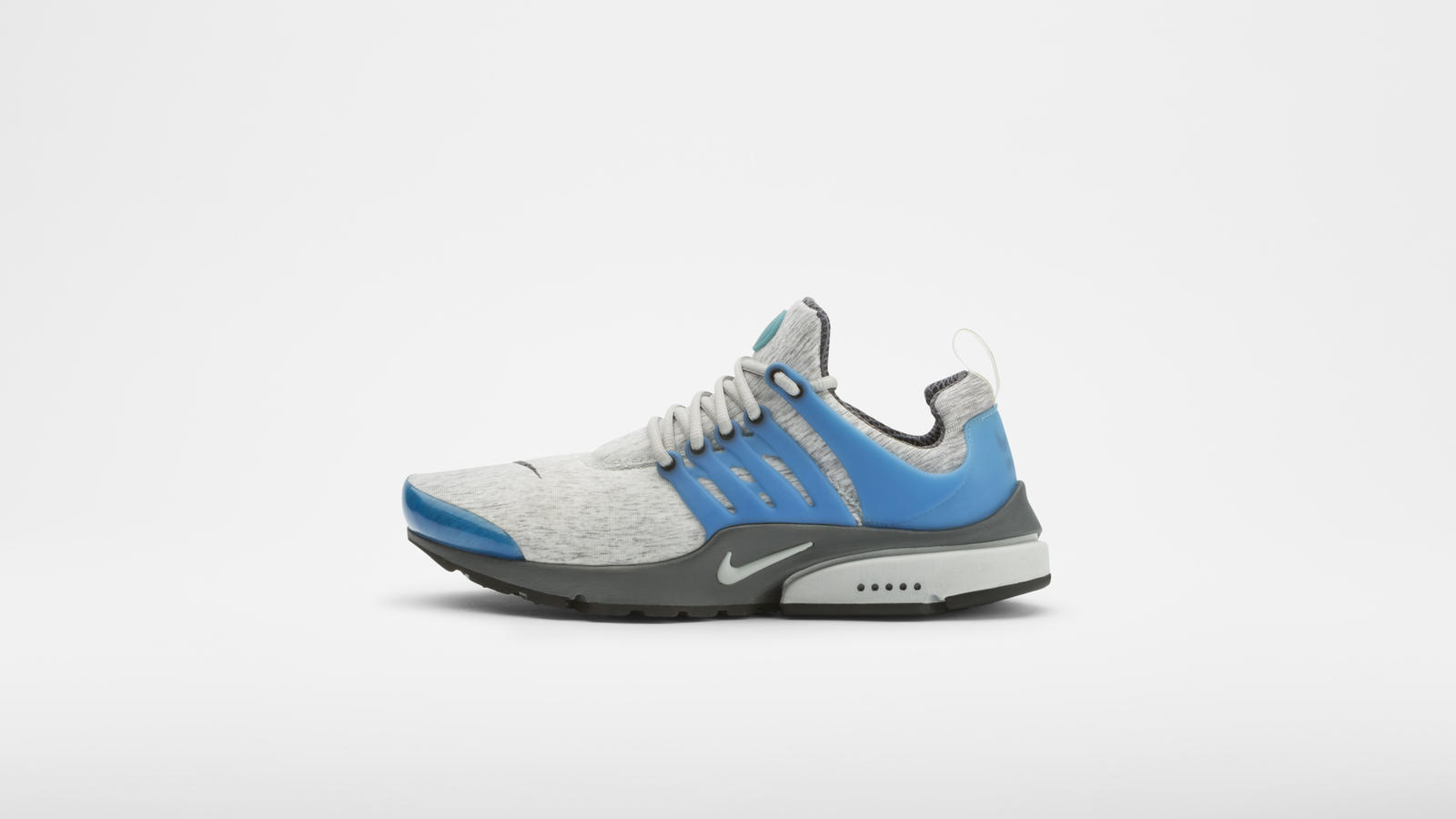 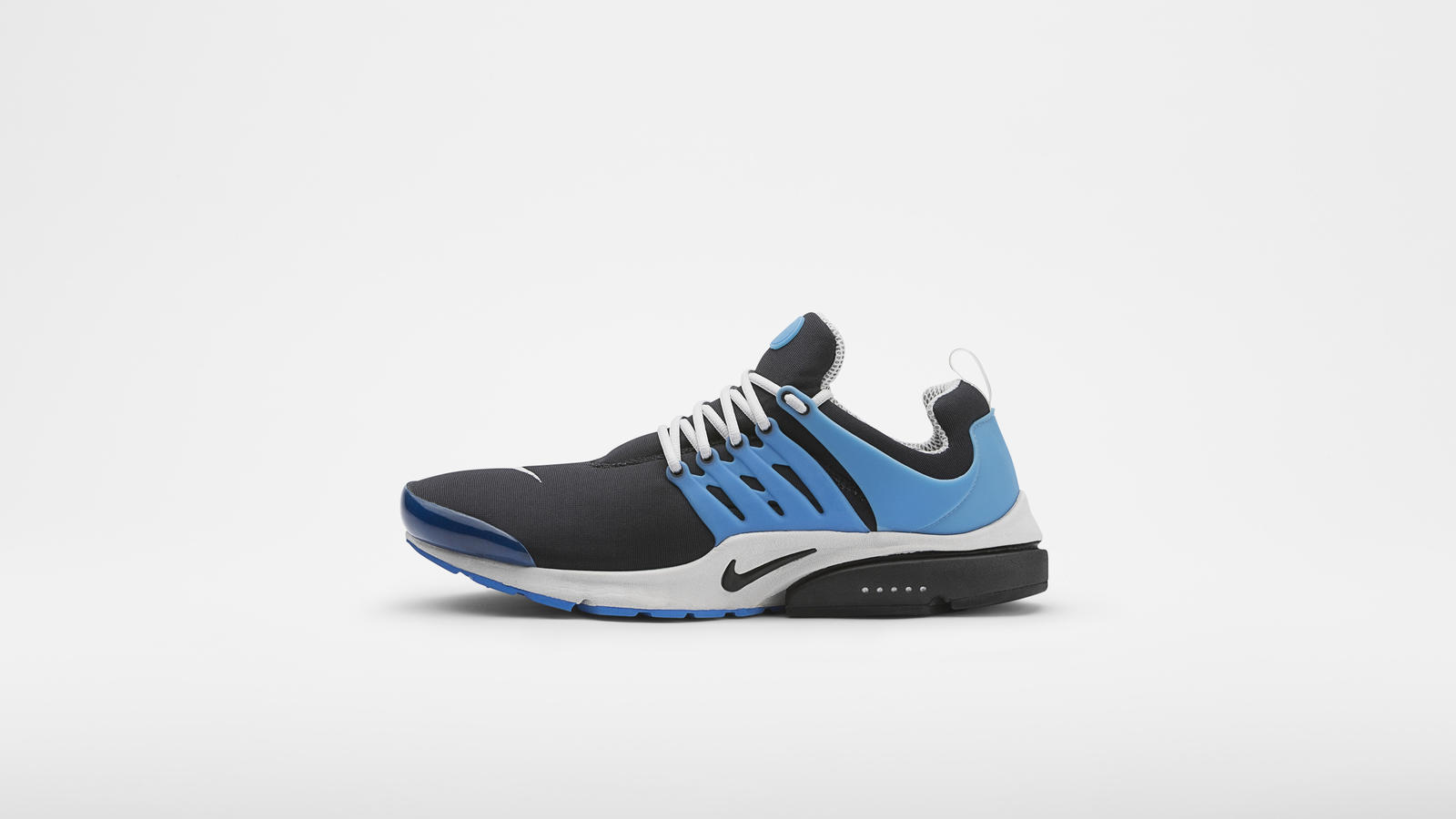 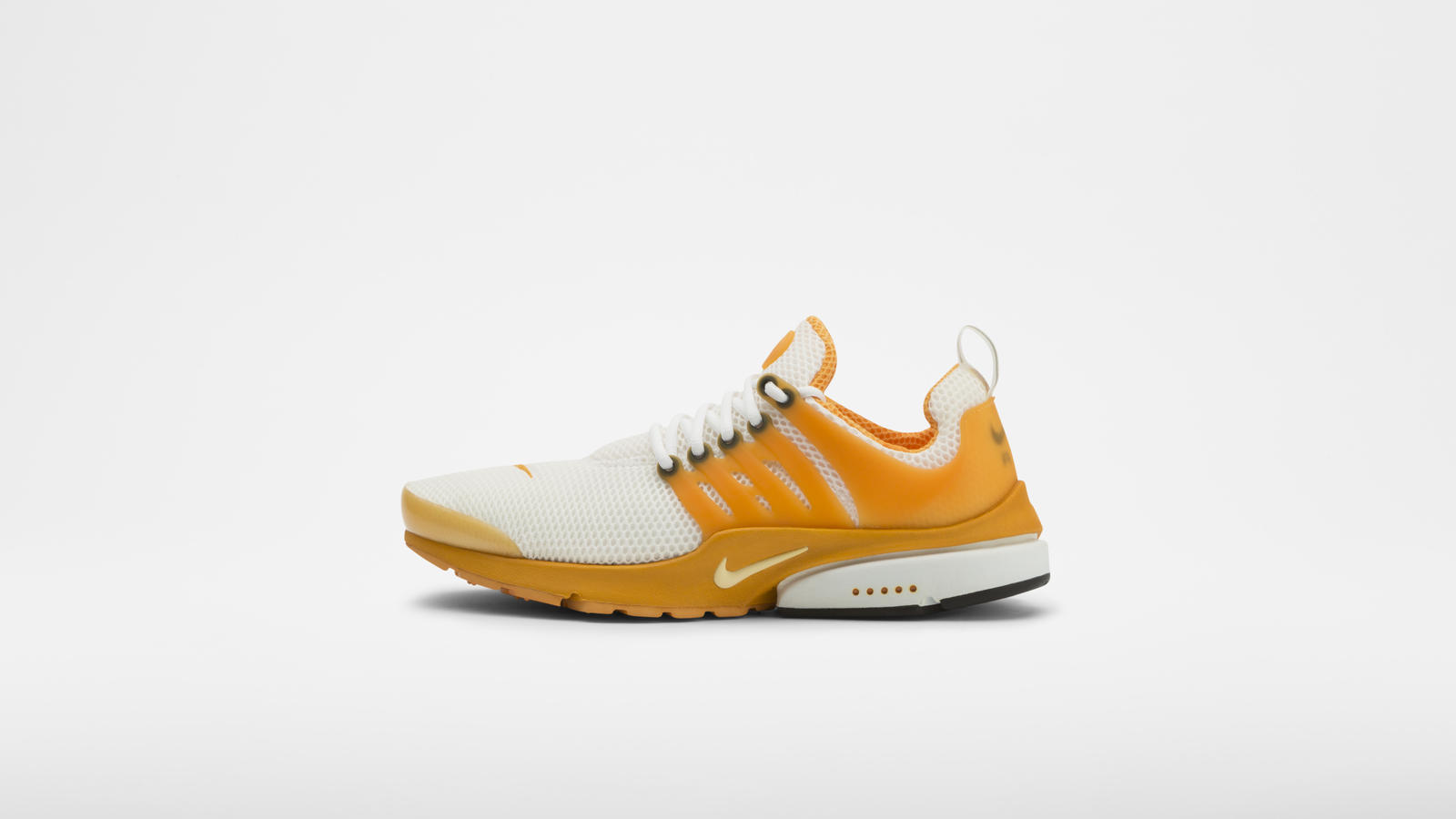 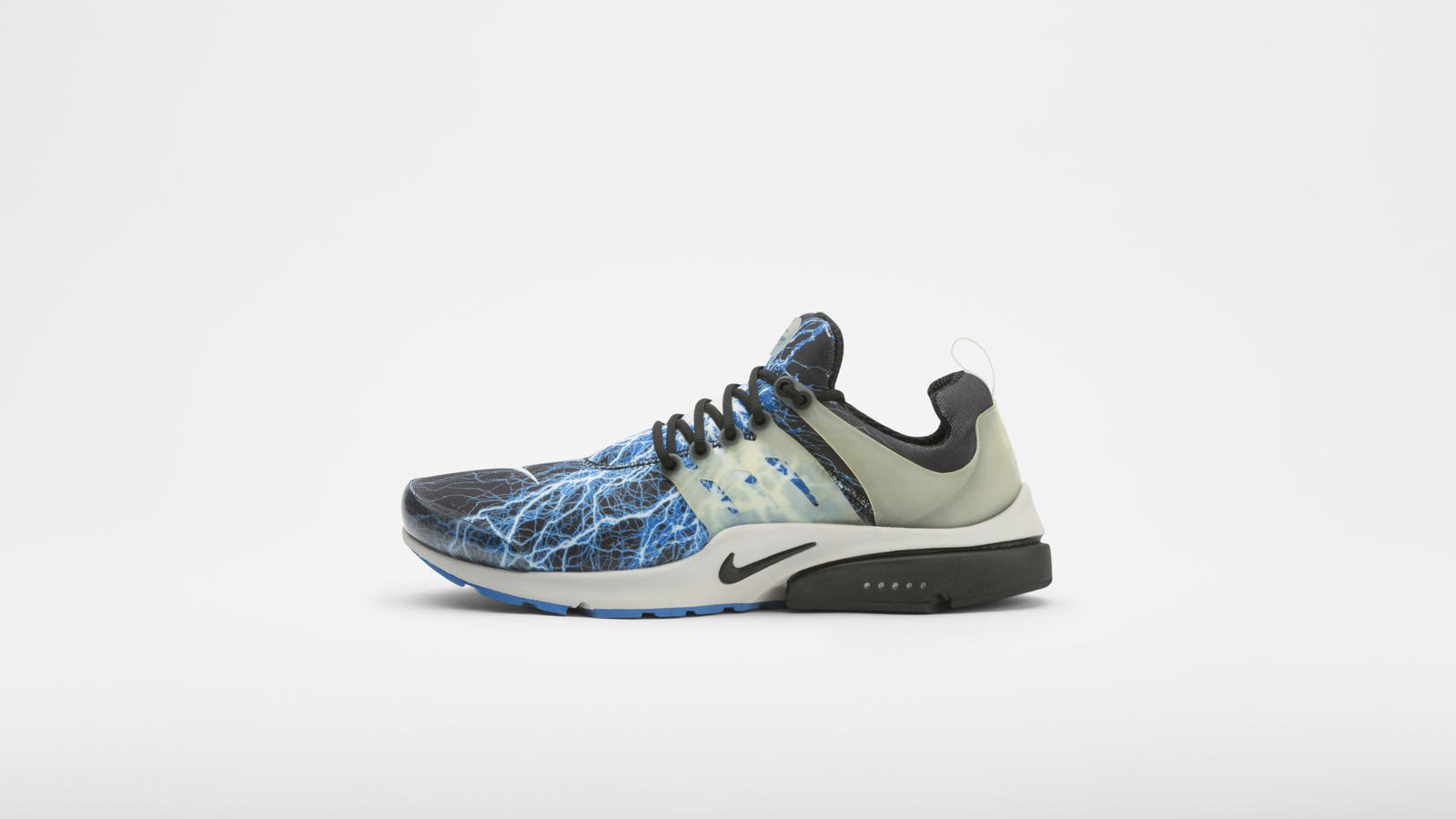 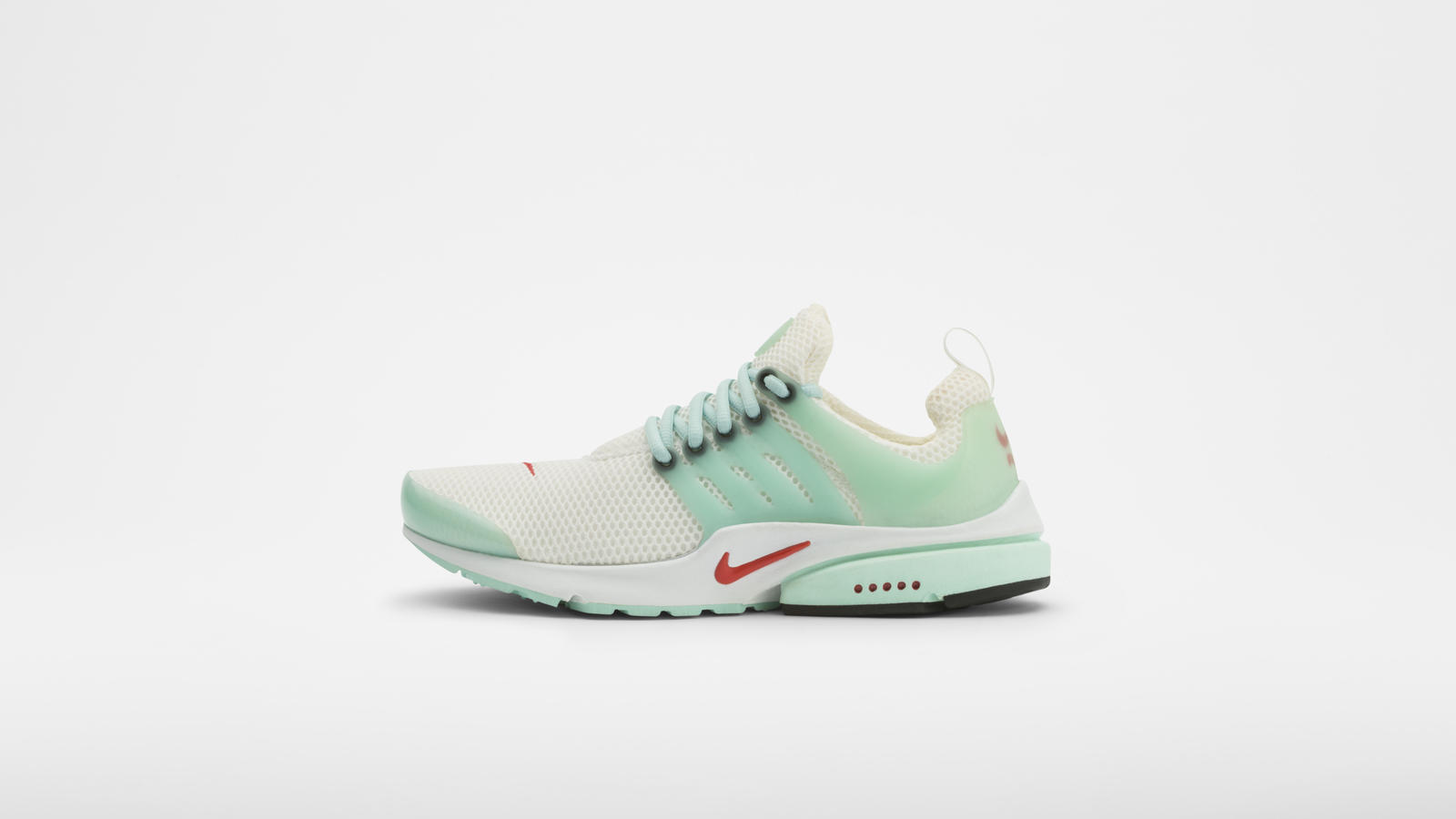 Back in early 2000, “Shady Milkman” and “Rogue Kielbasa” read more as eccentric menu items than monikers for groundbreaking running shoes. But that was before an irreverent advertising campaign, designed to underscore the disruptive nature of the newly released Nike Air Presto, turned notions of performance footwear on their heads.

The Presto’s original overture may have been cheeky, but the silhouette’s innovation story, which began in Korea four years before, was serious business.

The first prototype for what would become the Nike Air Presto (1996).

“I’m in Korea for a production meeting,” recalls Tobie Hatfield, Nike Senior Director of Athlete Innovation, who was serving as a footwear developer at the time, “and everybody was given a pair of recently released shoes. When I put the shoe on and stood up, the collar splayed out.”

The less-than-perfect fit reminded Hatfield of feedback he had recently received from a focus group. Participating runners had two primary demands: First, they didn’t want their feet to fight their shoes, meaning fit was paramount and, second, they wanted footwear that offered the same comfort that slippers provide.

So Hatfield set out to design a shoe that would deliver unrivaled fit and comfort. He immediately put pen to paper and his sketches soon produced a prototype featuring what Hatfield dubbed a “V-notch,” a carved-out area by the ankle intended to improve fit.

“I didn’t want to run in [the prototype] because I thought it was important to get unbiased feedback,” Hatfield says. “So I asked a co-worker to try it. I had one major concern, though: The prototype was a size nine, while my colleague wore a size 11.”

But Hatfield needn’t have worried; the wear tester didn’t complain about the fit. In fact, he was shocked to hear it was two sizes too small. “In addition to improving the heel fit, the V-notch relieved tension in the collar and created a hinge effect that helped the shoe grow in length,” Hatfield explains.

The prototype’s performance was a revelation. If a runner with size 11 feet could wear a size nine, then perhaps Nike could rethink footwear sizing altogether.

“We don’t do half sizes for our T-shirts; we do small, medium and large,” Hatfield says. “So what if we tried the same thing for footwear? What if we gave the athlete a range?” 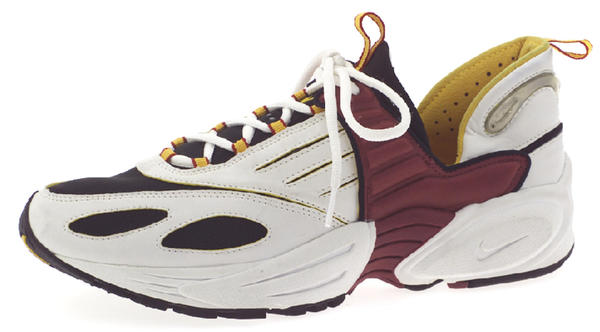 When Hatfield moved back to Nike World Headquarters in Oregon in 1997, he and a team of designers continued to work on the project. The fruits of their labor first appeared in the marketplace in 1998, with the launch of the Nike Air Gauntlet.

The running shoe notably featured a V-notch, as well as single layer stretch mesh in the forefoot and a heel clip made of spring steel, which the wearer could open or close to customize the fit. A virtually seamless interior provided increased comfort. “The goal was for the shoe to be seamless and customizable,” Hatfield says. “When you combined the V-notch with the heel clip, the foot could move and behave more naturally.” 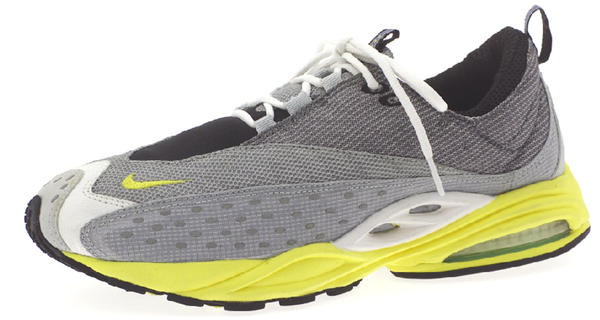 Looking to extend the concept to the elite runner, Hatfield and team devised the Nike Air Zoom Drive, which launched in 1999. The shoe possessed a more traditional collar, but maintained a near seamless interior and stretch mesh in the upper. The heel clip also returned, but it was now embedded. Visible Zoom Air, a relatively new technology at the time, provided runners with responsive cushioning.

“The Air Zoom Drive was a high-tech, fast-paced running shoe,” Hatfield recalls. “But it was still built on the same principles of comfort and fit that were the pillars of the original project.”

The concept for the Air Presto was born on that fateful day in Korea in 1996. But it wasn’t until 2000 that the shoe finally became a reality. The final hurdle was landing on the ideal upper material. 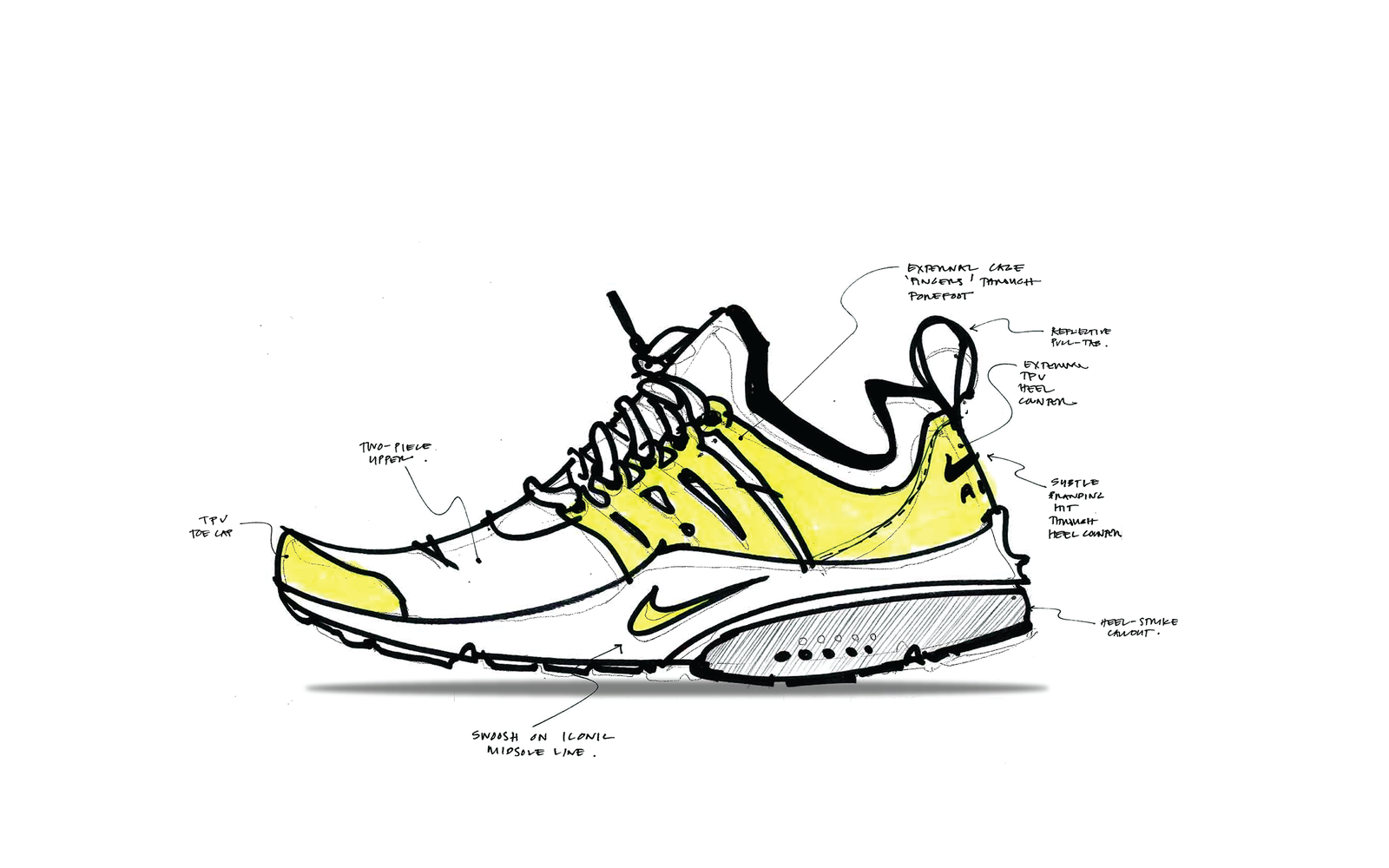 An early sketch of the Nike Air Presto.

“The Air Huarache had neoprene in the upper, which had great stretch and cushion to it,” Hatfield expounds. “But neoprene is designed to keep heat in, which means it doesn’t have much breathe to it. So I asked our materials team if they had any ideas for a breathable, neoprene replacement.”

The answer was spacer mesh, a material used primarily in the medical industry. Spacer mesh is not only highly breathable, but it can also stretch in every direction, ideal for a shoe looking to achieve the flexibility that Hatfield’s first V-notch prototype delivered. “With the spacer mesh, we could afford to make the V-notch a bit less extreme, while not sacrificing any stretch,” Hatfield says.

Reflecting Hatfield's original vision, the shoe was available in sizes ranging from extra small to extra large, making "T-shirt for the Foot" a fitting tagline. A midfoot cage and external heel counter lent the necessary support, while a toe bumper provided loft in the forefoot for added comfort. The shoe was finally ready, but it needed a name.

“We had the idea to crowd-source the name from the design and development community,” Hatfield says. “I think we received more than 300 submissions, one of which was Presto Magic. When you put the shoe on, it fits so perfectly that it’s almost like a magician saying: ‘Presto’.”

From there, Nike carried over the unconventional naming process to the silhouette’s colorways. There was “Catfight Shiner” and “Trouble at Home,” the “Abdominal Snowman” and the “Rabid Panda,” each accompanied by playful illustrations that gave the shoe added character. 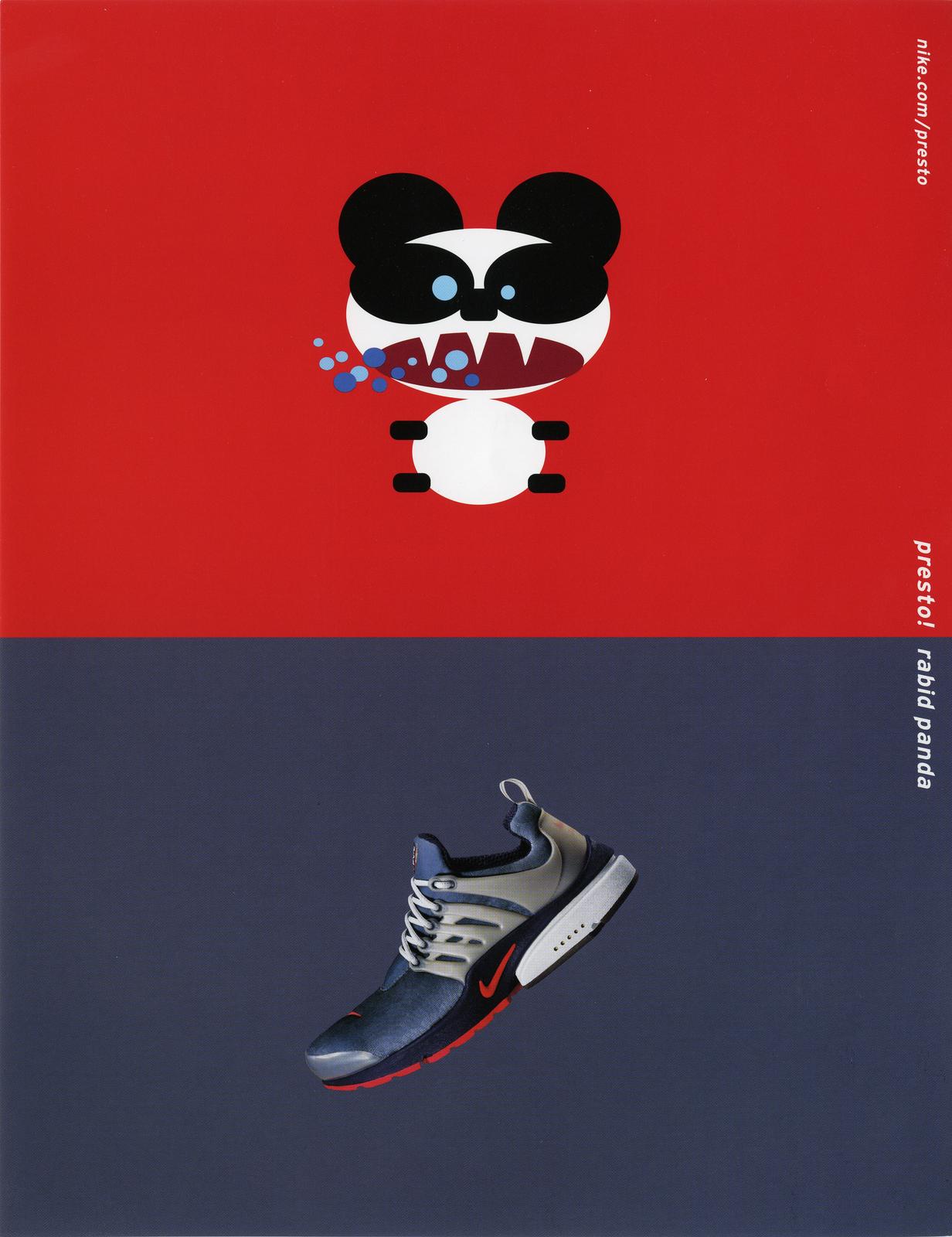 An advertisement for the Nike Air Presto: Rabid Panda (2000).

Advertisements for the Air Presto appeared in print and on television, with the television ads becoming even more avant-garde over the years.

In the 16 years since its launch, the Nike Air Presto has been worn by elite runners, featured in art galleries, and become a staple of sport style. And its impact internally at Nike has been every bit as profound; its lightweight, form-fitting, minimalist construction accelerated the design team’s thinking around the concept of natural motion. “People always ask me, ‘Why didn’t we do a Presto 2?'” Hatifeld says. “We did. It’s called Nike Free.”

In fact, original Presto lovers now have a catalog of options from which to pick, including myriad new Nike Free silhouettes and the Nike Air Presto Ultra Flyknit, which, in the silhouette’s trademark fashion, makes you rethink everything you thought you knew about Presto — but still imparts instant happiness.