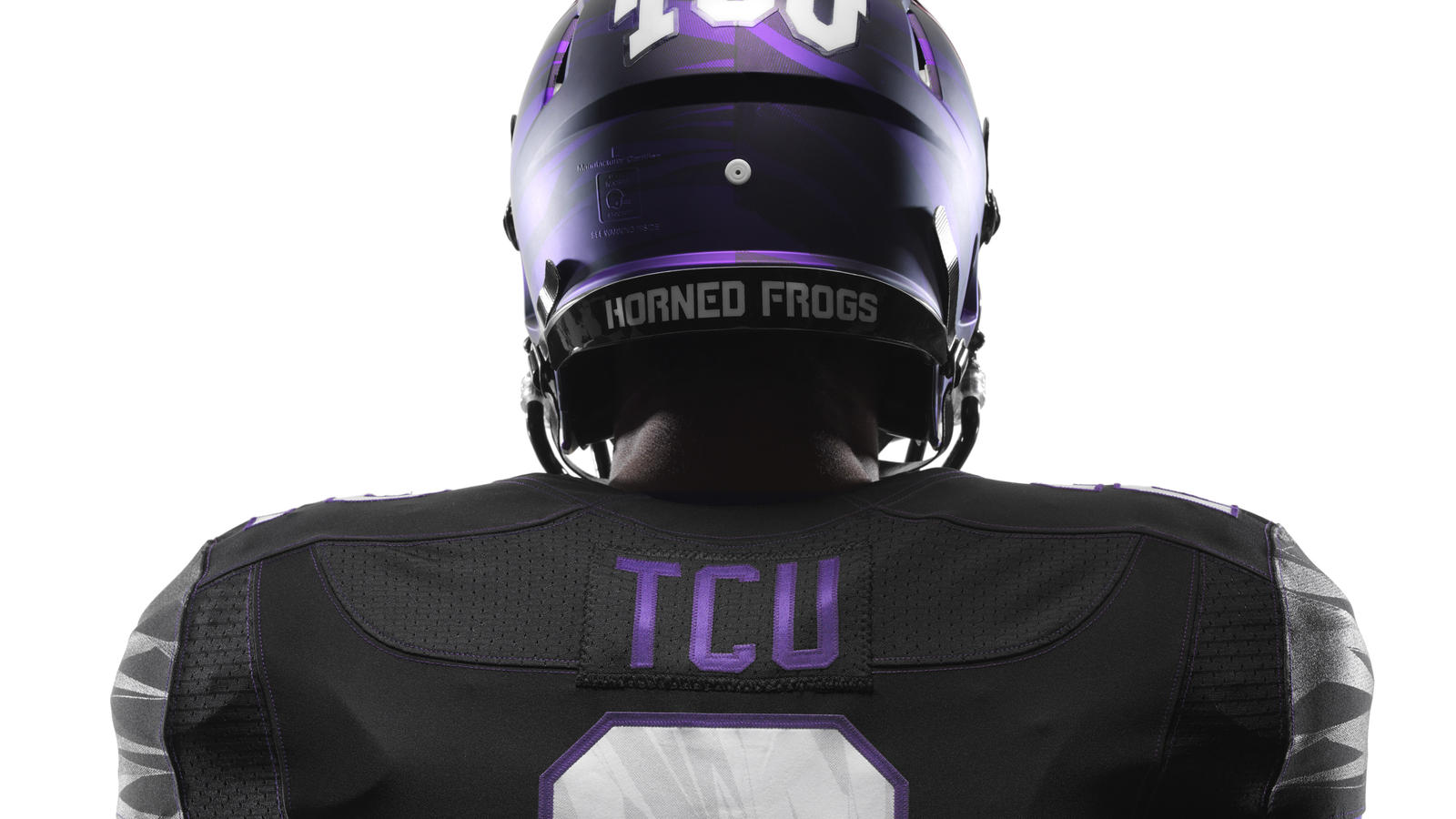 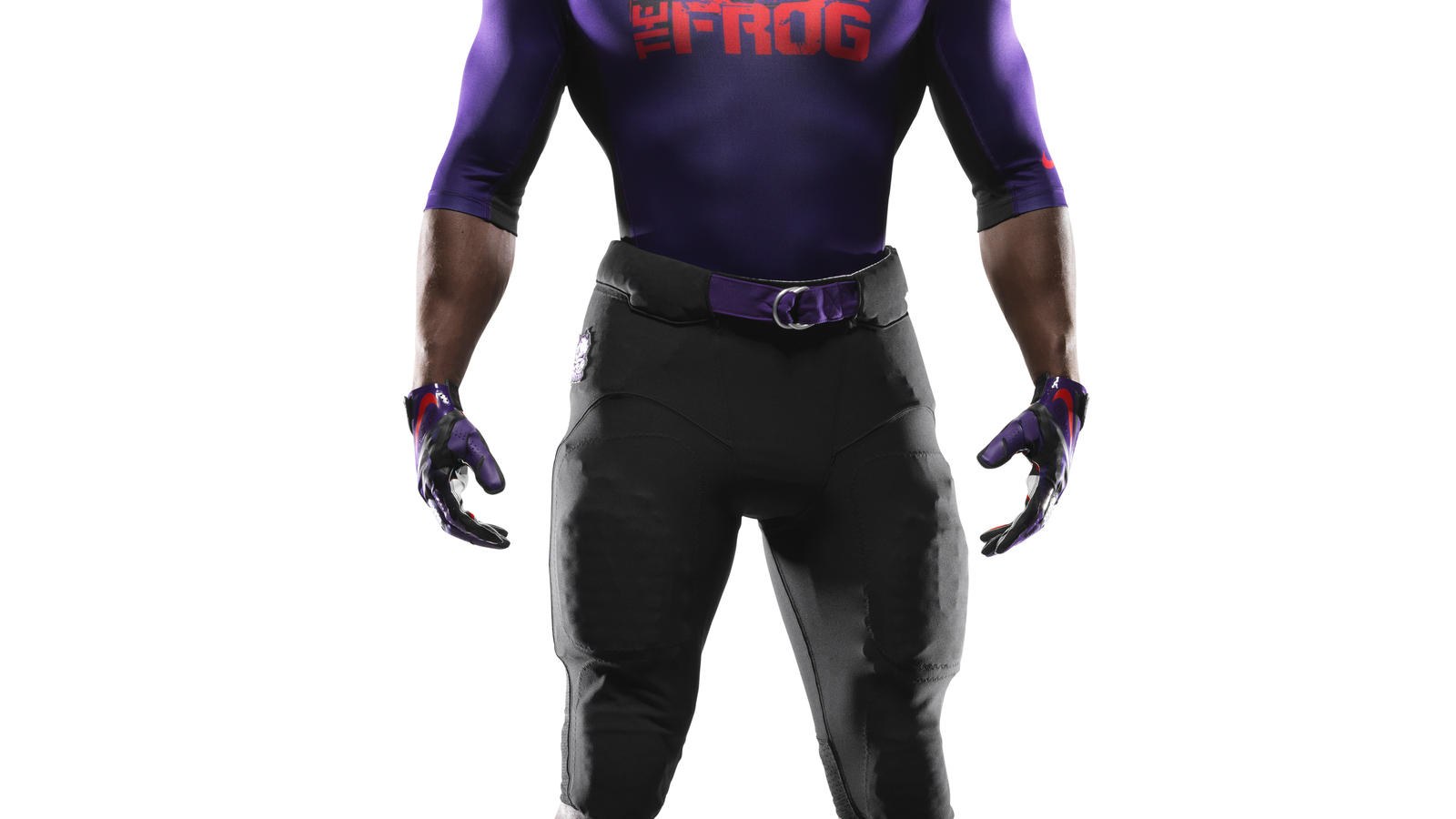 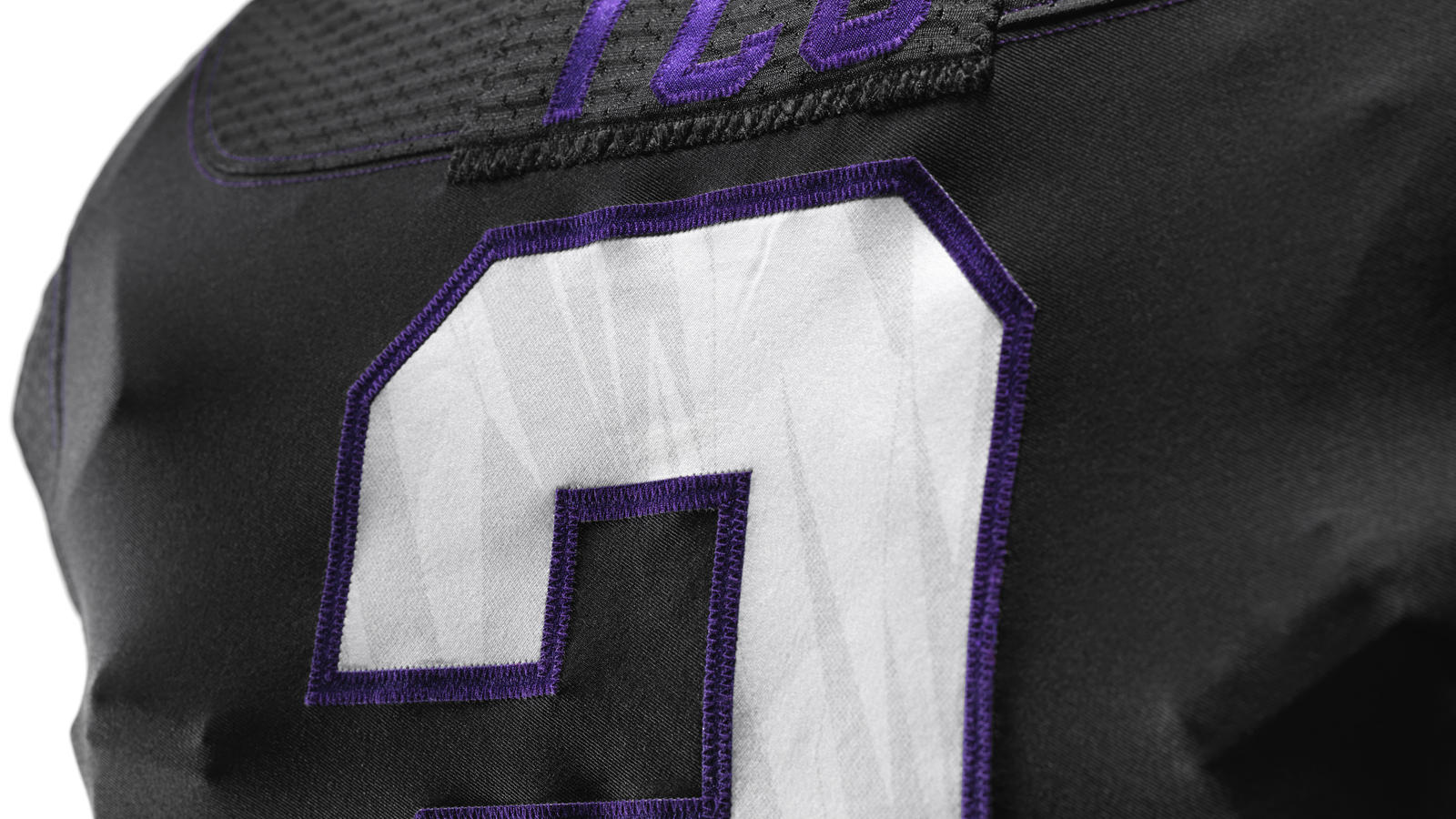 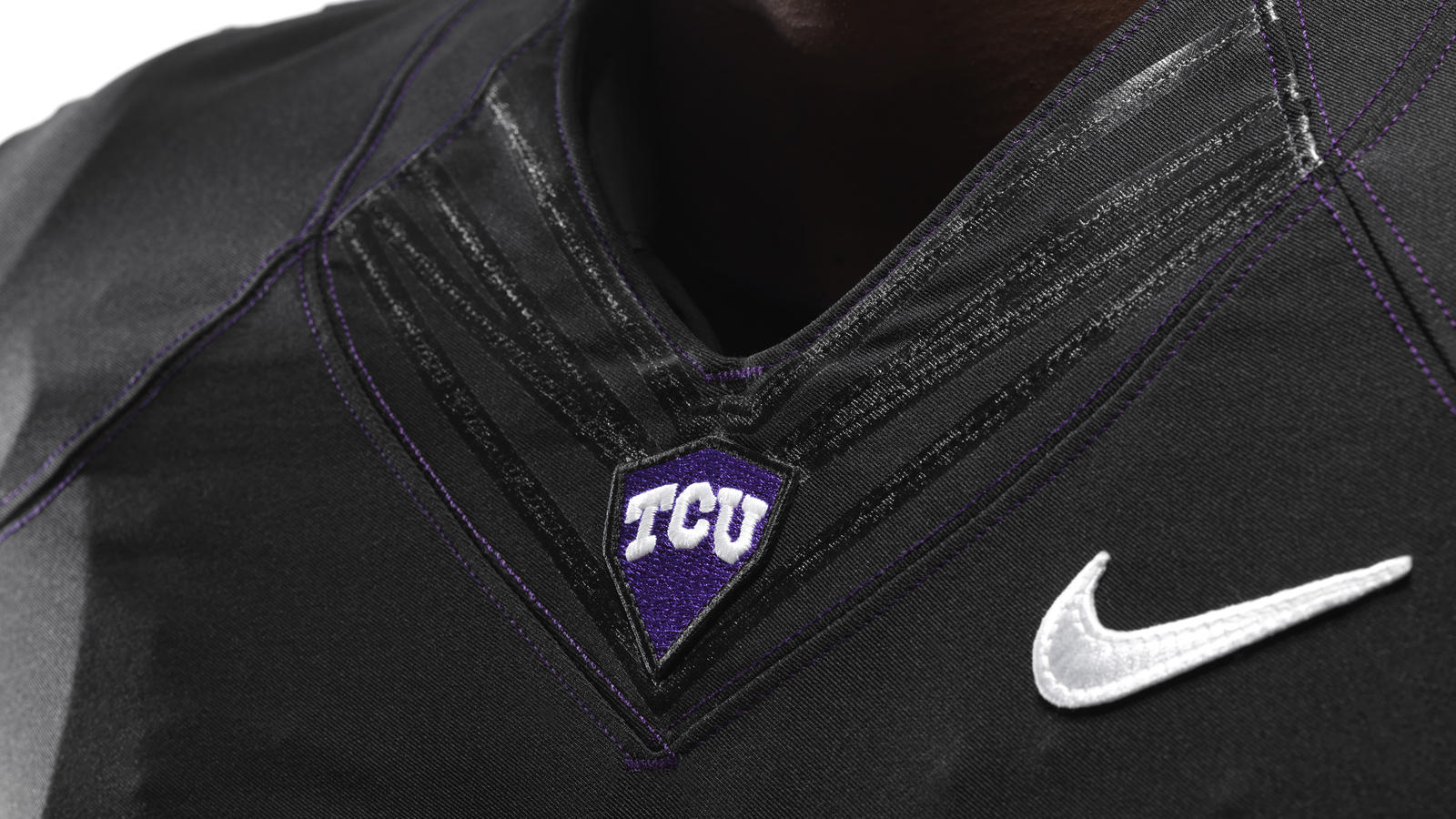 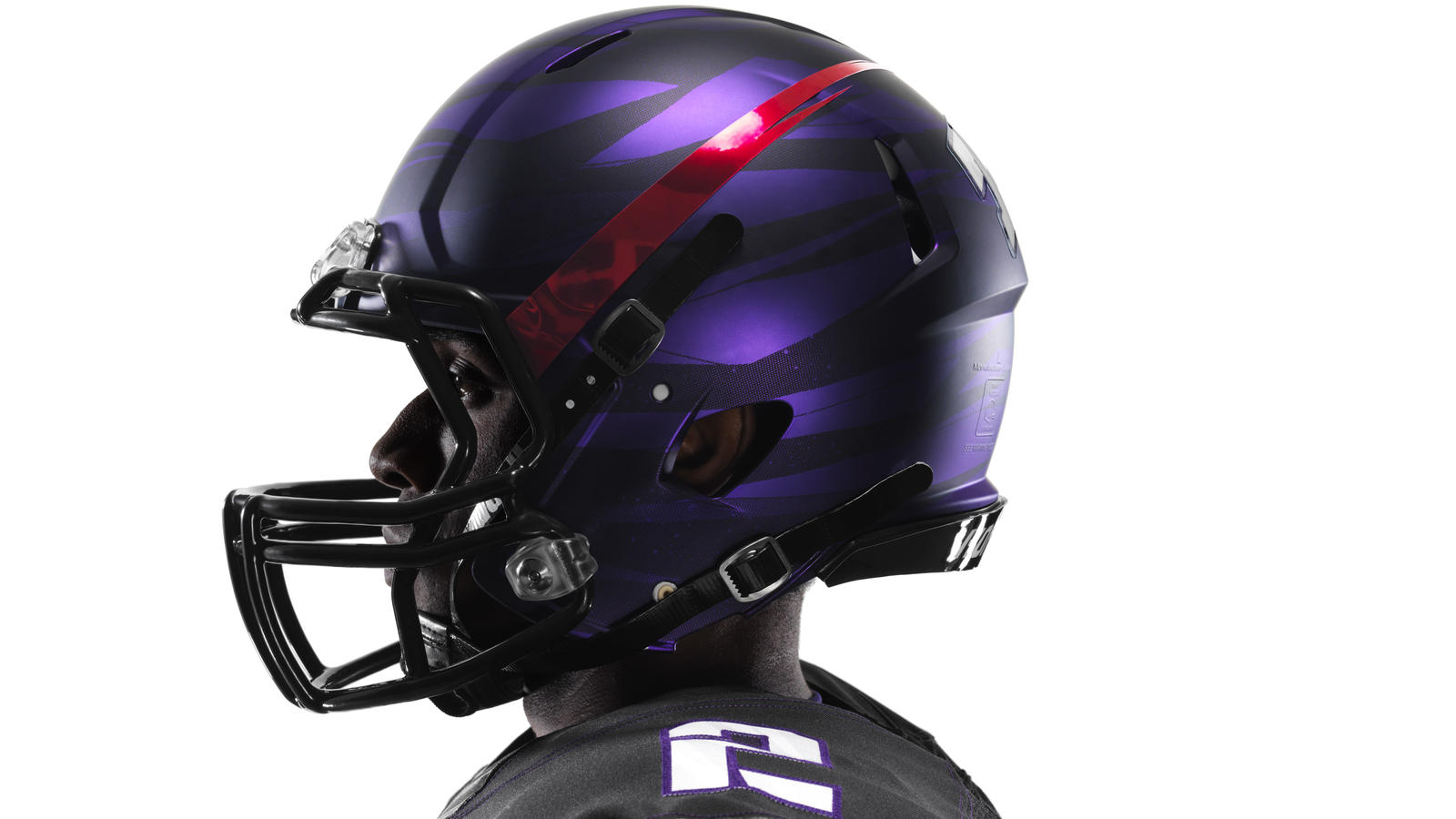 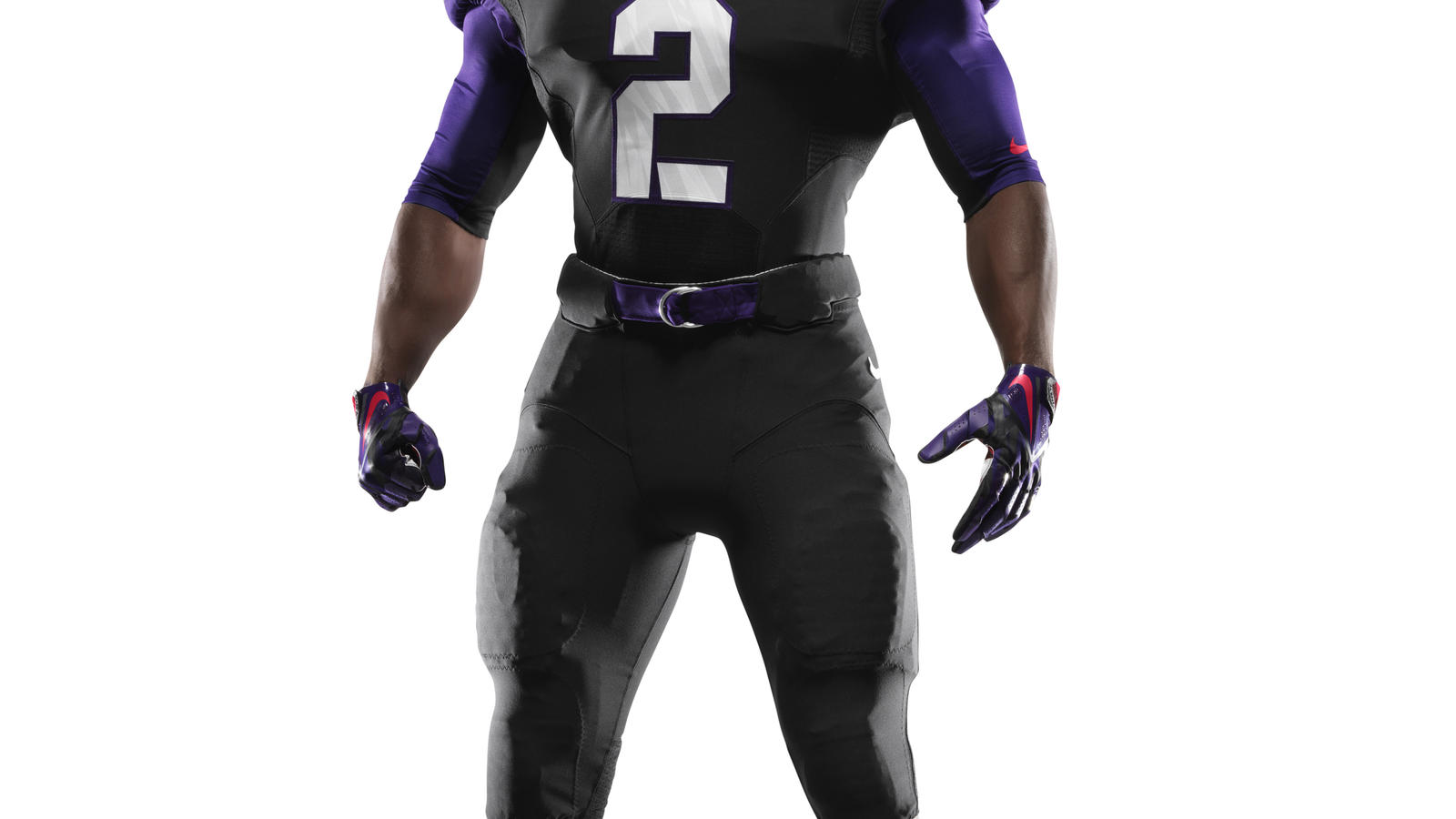 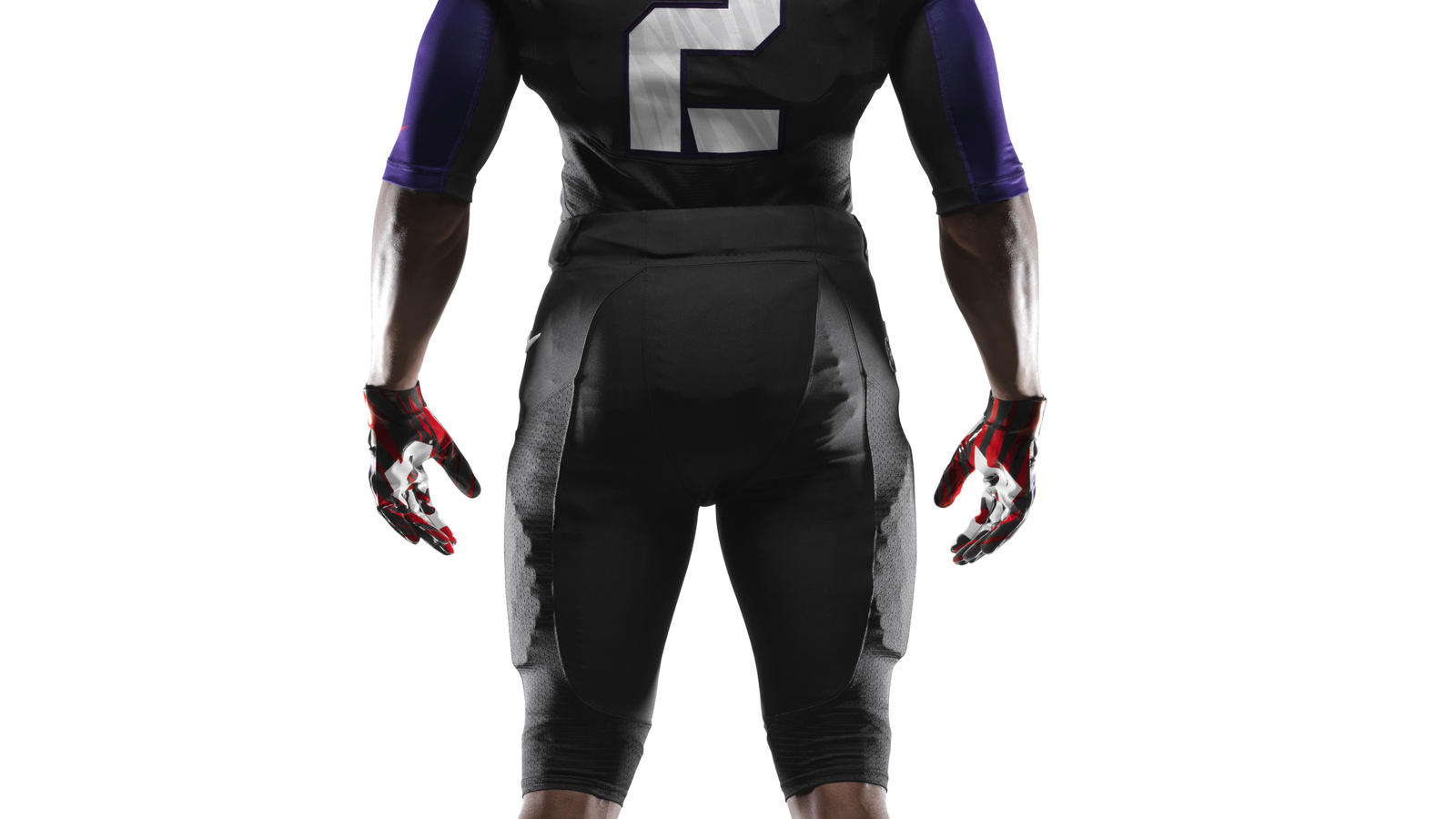 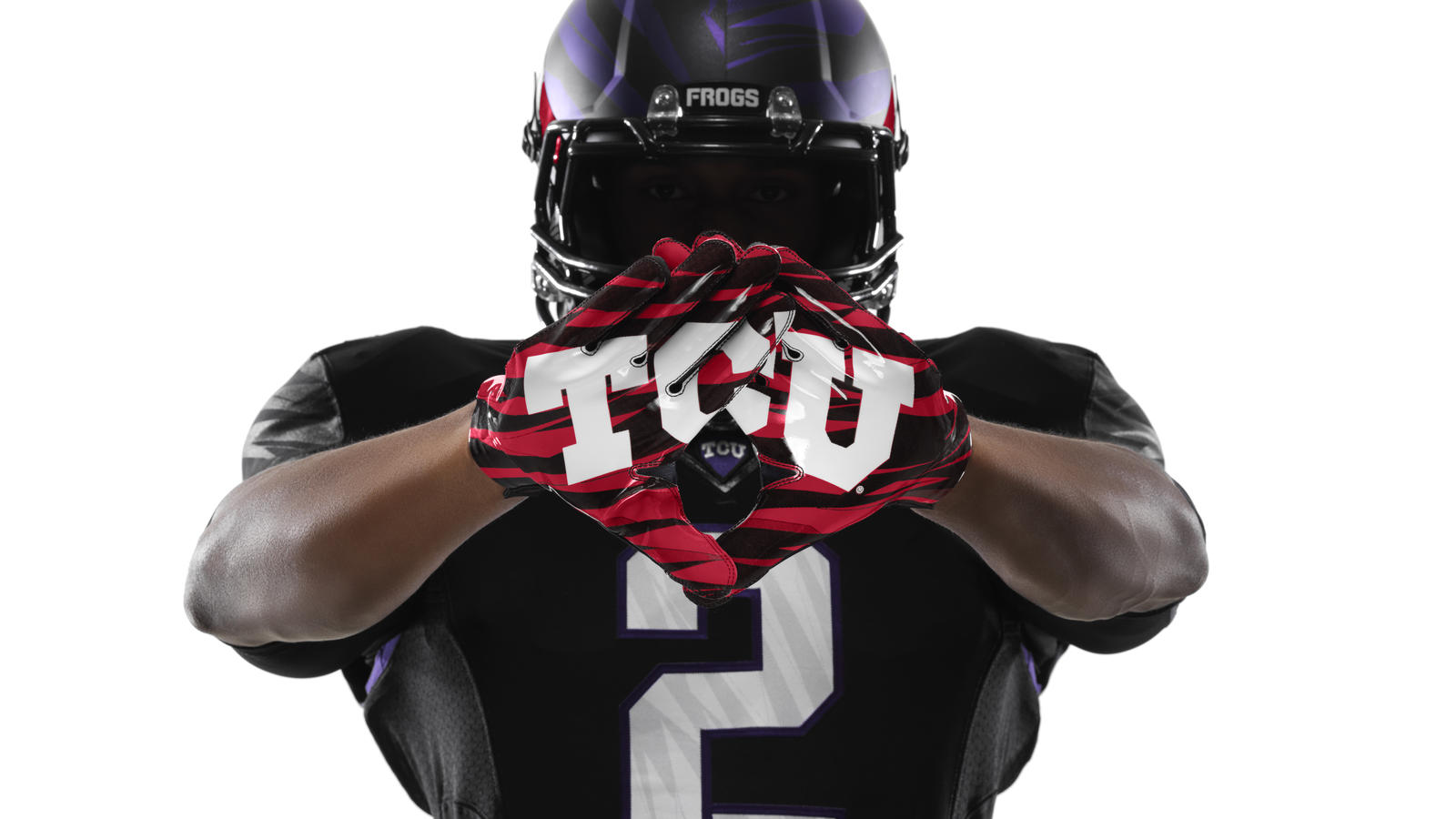 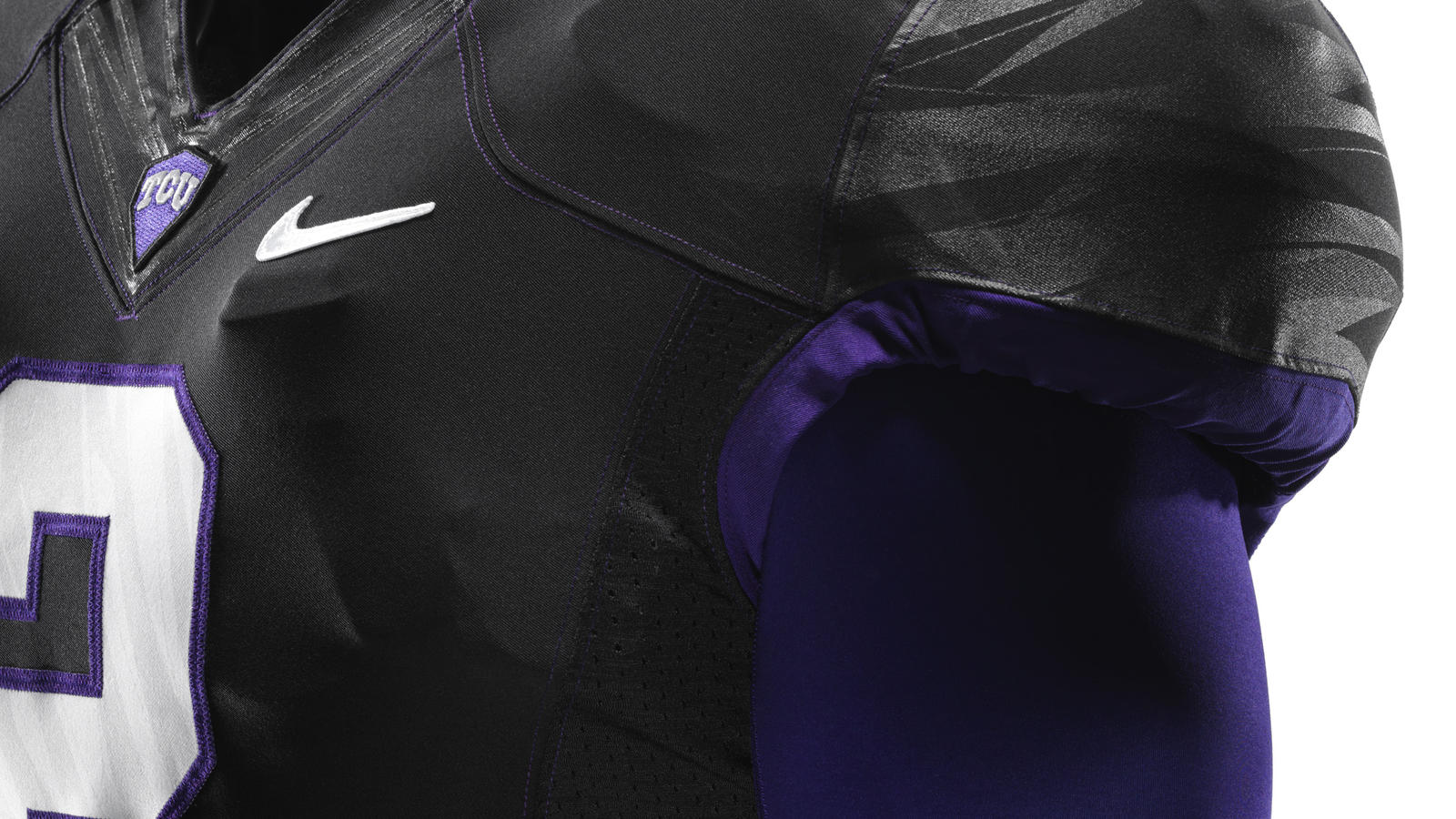 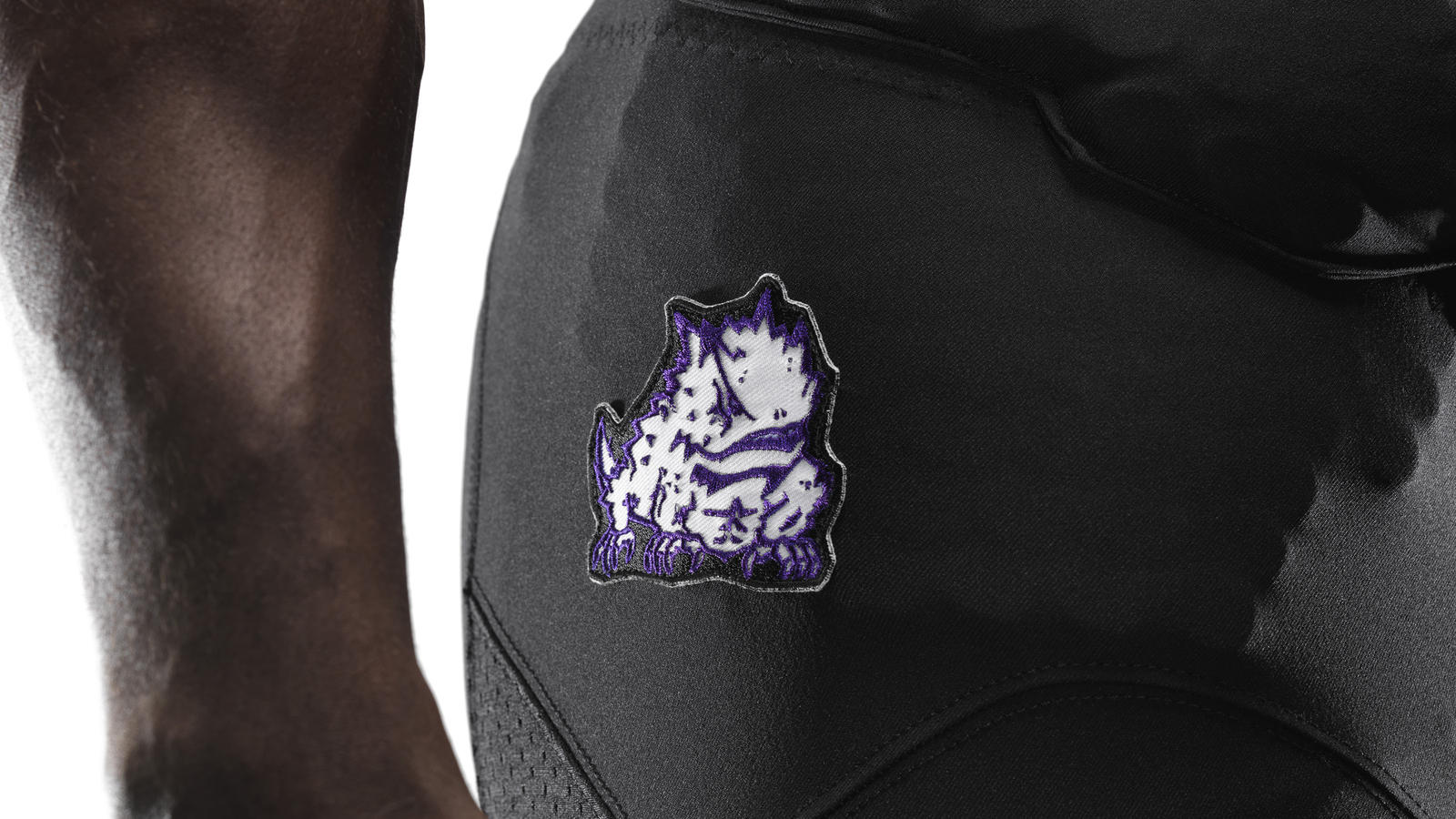 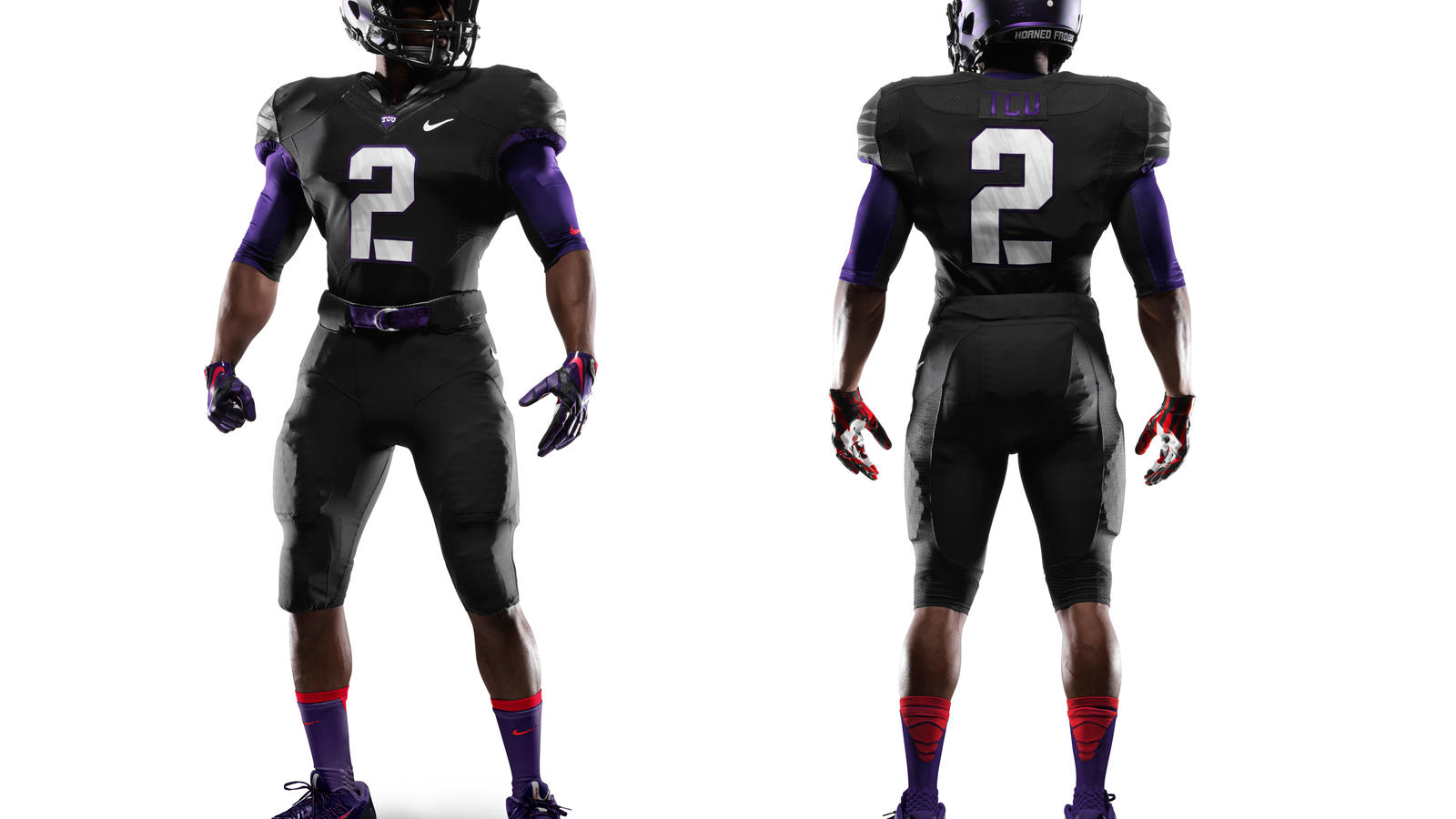 TCU’s brand of football is as tough as the school’s mascot, the fierce desert-dwelling horned frog. Legendary TCU Coach Dutch Meyer revolutionized football during a run to the 1935 national championship - employing the “Meyer Spread,” a formation that allowed his star quarterback Sammy Baugh to revolutionize the forward pass. The success of the 1935 team, built on a fearless and innovative attitude, defines both the mascot and the team today.

Like the horned frog, the TCU football team uses speed, quickness and innovative defense tactics to out play the competition. The frog’s scaly body armor serves as inspiration for TCU’s new football uniform aesthetic, forming a distinctive pattern on the jersey numbers, sleeves, gloves and helmet.

TCU’s all-black uniform features purple highlights and bold white numbers that reflect the new spike design pattern. The uniform also features red accents that harken back to the horned frog’s defense mechanism - a shot of blood from the eyes that repels encroaching foes. This visual reminder of the “bloodlines” and brotherhood of the team creates a head to toe aesthetic from cleat to helmet.

The color scheme is mirrored in the Nike Pro Combat Hypercool baselayer, socks, Nike Vapor Jet 2.0 Gloves, and Nike Alpha Pro TD red chrome-plated cleats. The helmet pulls all of these elements together in TCU’s traditional purple with a satin metallic metal finish.

Further graphic details on the uniform include the TCU logo on the back of the helmet (rather than on the side, as is tradition), and the words “Fear the Frog” embroidered on the back neckline of the jersey. The complete uniform honors the resilience of the horned frog and its influence on a small program, defined by an aggressive, fast offense, with an ability to upset powerhouse opponents.

This fully integrated uniform system incorporates the latest in Nike’s performance innovation, where the athlete’s baselayer works in concert with the entire uniform – true innovation from the inside out. Lightweight padding is integrated directly into the crucial “hit zones” in the baselayer. Innovations include integrated Flywire technology in the neckline for reduced weight and lockdown fit over pads. Additionally, increased sleeve articulation provides better range of motion, and four-way stretch fabrication delivers a streamlined, shrink-wrap fit.

TCU will wear this special edition uniform against rival LSU for the season opener on Aug. 31.