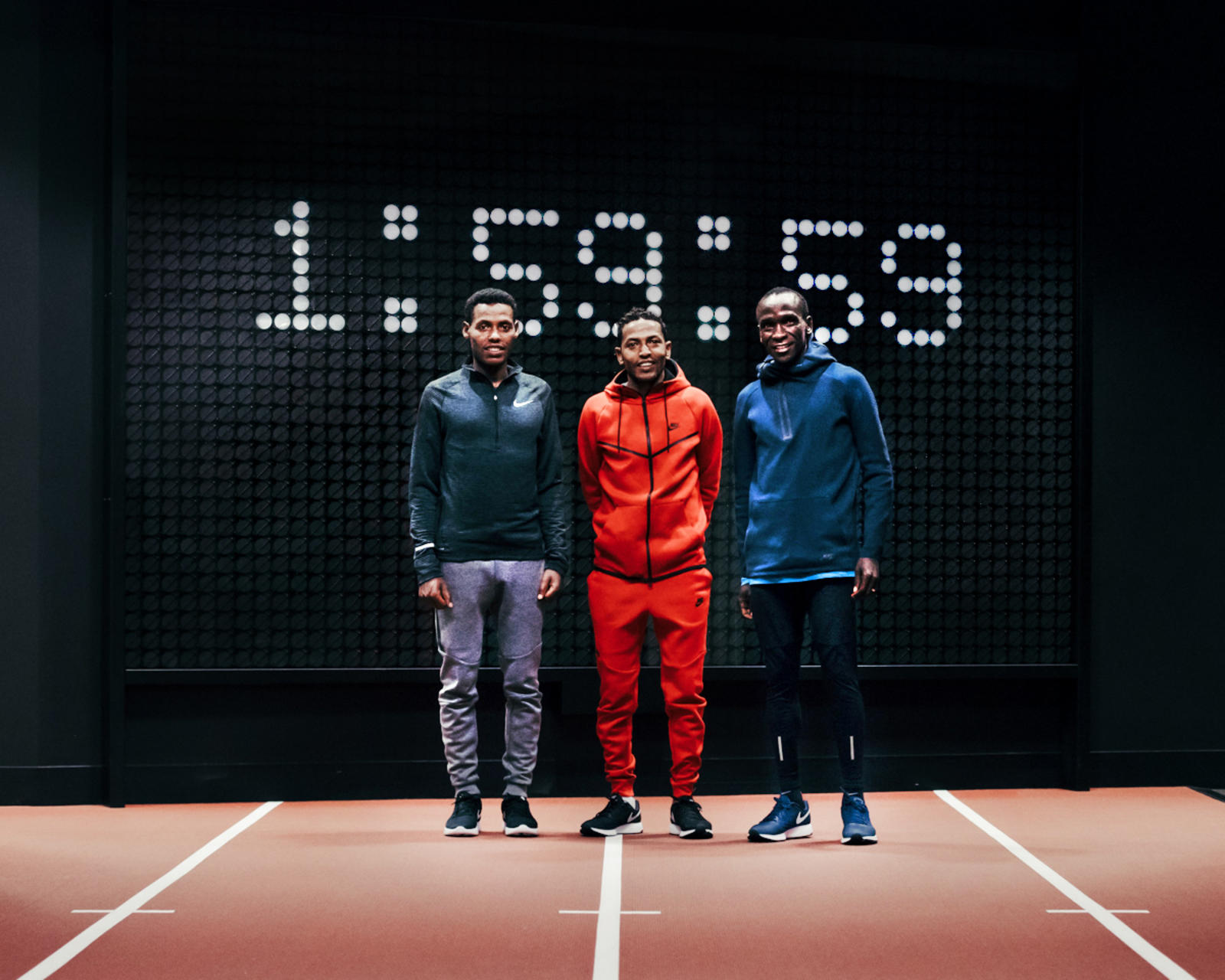 As Lelisa Desisa, Zersenay Tadese and Eliud Kipchoge (shown above) approach their go at a 1:59:59 marathon, a few of the world's top runners — past and present — weigh in on what the attempt really means and why the two-hour barrier is about so much more than a race.

1. Two minutes and 58 seconds is a significant amount of time

It took 16 years for the marathon record to drop about three minutes from 2:06:05 to 2:02:57, the current world record that was set in 2014. If history were any indication, we’re still a long way away from witnessing a sub-two-hour marathon. On top of that reality, attempting it involves a unique mental challenge that adds another layer of doubt. “A lot more can happen over a two-hour period than a 10-second one,” says Carl Lewis, one of the first sprinters to break the 10-second barrier.

In 1991, Carl Lewis reclaimed the record for the 100-meter dash with a time of 9.86 seconds and held it for nearly three years.

Even the greatest runners in the history of the marathon understand the enormity of the barrier and what’s needed to overcome it. “It’s not normal to run that fast for that long,” says Galen Rupp, who earned bronze in the Rio marathon. (Some perspective: He would need to cut nine minutes and 59 seconds off his marathon PR to run a sub-two-hour race.) Still, he’s optimistic. “It’s not a matter of if this barrier will be broken, it’s when,” he says. And that’s exactly why Nike isn’t waiting for history’s permission to try to make it happen.

2. This is one of sport's last great long-standing barriers

“The biggest monster of all is the marathon,” says Bernard Lagat, a five-time Olympic gold medalist and one of the pacers who will be running to keep Kipchoge, Tadese and Desisa on track for a sub-two-hour marathon. The sheer length of the race makes it that much more exciting to watch. “It’s not often that you get such a good barrier to go after,” says Rupp. Many runners agree that the last time a running record of this significance was broken was 63 years ago when Roger Bannister ran the mile in less than four minutes.

The first person to run a sub-four-minute mile was Roger Bannister in 1954 with a time of 3 minutes and 59.4 seconds. He held the record for approximately 46 days. Since then, 25 athletes have run a mile in less than 4 minutes.

What makes this attempt even more impactful is that it’s a milestone in a race that most people can relate to on a personal level. “It’s an especially unique barrier because the marathon is an event that everyone around the world has the ability to partake in,” says Lewis. Joan Benoit-Samuelson, the first women’s Olympic marathon champion, agrees with Lewis, calling running a common language around the globe.

3. Marathons humble even the best athletes

Kipchoge, Tadese and Desisa signed on to attempt Breaking2 because Nike thinks they’re the best at what they do. But that doesn’t make the athletes bulletproof. “It will be up to the runners to have one of those rare days where everything clicks,” says Benoit-Samuelson.

Joan Benoit-Samuelson, the first ever women’s Olympic marathon champion, broke the women’s world marathon record in 1983 when she finished Boston with a time of 2:22:43. It was 11 years until someone beat her time.

Watching these three brave men take on this enormous endeavor in the public eye is undeniably inspiring in many ways. “Breaking2 has made me think about limits I may have unknowingly placed on myself and how I can overcome those,” says Rupp. Lagat, who has been training just to be able to pace portions of the Breaking2 attempt, is using the experience to reinvigorate a big dream: “I feel new excitement to try to break the American record in the 10,000 meters.”

For others, Breaking2 is providing bigger-picture inspiration. Benoit-Samuelson started running when women were told they couldn’t run more than 1500 meters at a time for fear they wouldn’t be able to have children. “Well, 150 thousand miles and two children later, I’m still trying find that finish line,” she says. To her, this is what Breaking2 is all about. “Going after a seemingly impossible barrier has given me — and I think anyone who is passionate about what they’re doing with their life — motivation to go after any goal.”

5. A win could change the sport of running

Paula Radcliffe, the fastest women's marathoner of all time, says this challenge is an important one for runners everywhere. “If any of the men can do it, it will open the gates for marathon running the same way Roger did for the mile when he broke the four-minute barrier,” she says. What was once impossible became common. “Most people thought a sub-four-minute mile was never going to happen, but now you have high school kids running it,” Rupp reminds. “It just takes one time to give the world the belief that it can be done.”

Rooting for the opportunity to see human potential push the boundaries of what’s possible and to shatter limits is something that has the power to unite people of any age, gender and race. “Breaking2 is an opportunity to show that when you put hard work, willingness, determination and support behind a mission to try to break down a big barrier, you can achieve it,” says Radcliffe. Perhaps the most exciting thing about this is that “it” can be whatever you want.

Paula Radcliffe has held the record for the world women’s marathon best since 2003 with a time of 2:15:25.