Simidele Adeagbo competed in her last major track and field competition in June of 2008. The 26-year-old, four-time NCAA All American and triple jump record holder for the University of Kentucky had been training since she was in high school to make it to the Olympics. But she fell short — by eight inches — for the last time. So, she hung up her track spikes, put away her training book and said she was “just going to be a regular person who worked and stayed in shape.” That lasted for nearly 10 years. 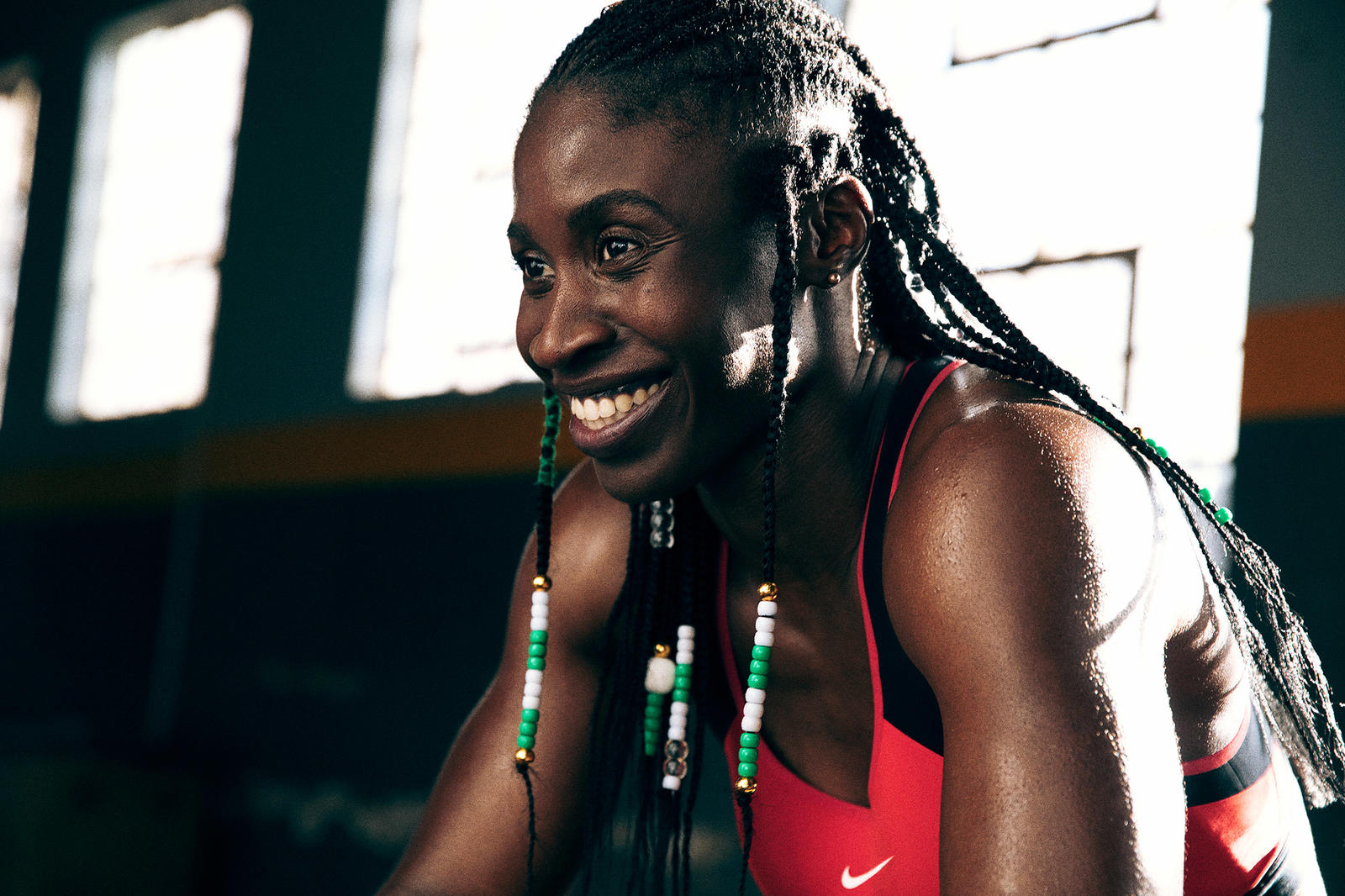 The now 36-year-old Nigerian athlete is just one race away from qualifying for PyeongChang in the sport of skeleton (a sliding sport in which one person rides prone in a small sled down a frozen track at speeds of more than 75 mph). If she makes it, she’ll be the first female skeleton athlete from Africa to qualify for the Olympics.

HOW CURIOSITY GOT THINGS IN MOTION

Adeagbo, who was born in Toronto to Nigerian parents and lived in Nigeria from when she was an infant to 6 years old, becomes even more impressive when you learn that the first time she ever touched a skeleton sled was on September 12, 2017. Her journey to South Korea began shortly before, in December of 2016, when she first heard of the Nigerian women’s bobsled team.

“I read an article about how the women had this audacious goal of becoming Africa's first-ever bobsled team to go to the Winter Olympics,” Adeagbo recalls. She had moved back to Africa (specifically Johannesburg, where she’s the running brand manager for Nike) four-and-a-half years earlier, after living in the United States. “I was super inspired, and instantly thought, hmm, ‘I wonder if I could be a part of that?’”

There were only three women featured in the article — and, from what Adeagbo knew, bobsled is a four-person sport. “So, when I saw that, I was thinking, ‘Oh, maybe they need a fourth person and maybe that fourth person could be me because there's a history of track and field athletes going into bobsled.’”

Adeagbo sent a message to the women through social media saying, "I'm super excited by what you're doing and am cheering you on. I noticed you only had three people. Are you looking for another teammate?” The women replied to her, letting her know that bobsled is a four-person sport for men, but it’s a two-person sport for women. They had their team. And an alternate.

WHEN “WHAT IF?” BECAME “THIS IS REALLY HAPPENING”

Flash forward to the end of July 2017, when Adeagbo saw an Instagram post announcing tryouts for the Nigerian Bobsled and Skeleton Federation in Houston, Texas. “I thought, ‘You know what? I'll never know if I don't go,’” she says. So, two weeks before the tryouts, she determined that she was in decent enough shape to go without injuring herself. She boarded a 22-hour flight from Johannesburg and arrived in Houston the morning of tryouts, tried out that evening and then flew back to South Africa the next day.

A couple weeks later she got the call she didn’t necessarily expect but hoped for: The federation wanted to invite her to come to a camp in Canada to see if she could live up to the potential she showed at tryouts.

See, Adeagbo did so well at those tryouts because she was being tested on everything she already mastered back in her track and field days: speed (with a 45-meter sprint), power (through a shot-put throw) and explosiveness (via a standing long jump). At tryouts, there wasn’t a sled — let alone a sliver of ice — within sight. But at camp, she’d have to use her 143-pound frame to power the push start of a 62-pound skeleton sled down a frozen track.

“I honestly didn't know much about the sport, but knew that there was a lot that I could draw from my track and field background to help me succeed in it,” she says. Though the similarities between the two sports may not seem obvious — one is jumping into sand, the other is sliding down an ice track on a sled — they are plentiful. Both sports require speed, explosiveness and power. “In each, you run as fast as you can for about 30 meters to gain momentum before you launch into or onto something,” Adeagbo explains. “I was able to pick up the push start very, very quickly because I already had that experience with the runway of triple jump.”

The most challenging part of a run for Adeagbo is not losing all the momentum she’s built up in the push start. “Where I really have the advantage is only for a very short amount of time, four or five seconds of the race,” she says. “But the track is a mile long, so the race will last another 50 seconds.”

To keep her edge, Adeagbo spends a lot of time in the gym doing Olympic lifts (cleans and snatches), plyometrics (explosive jumping moves including variations on box jumps), sprints and core-strengthening work. To simulate pushing her heavy sled, she pushes a big box with weights on top. “It’s all about getting more explosive and quick off the block, and stronger and faster overall,” she says. 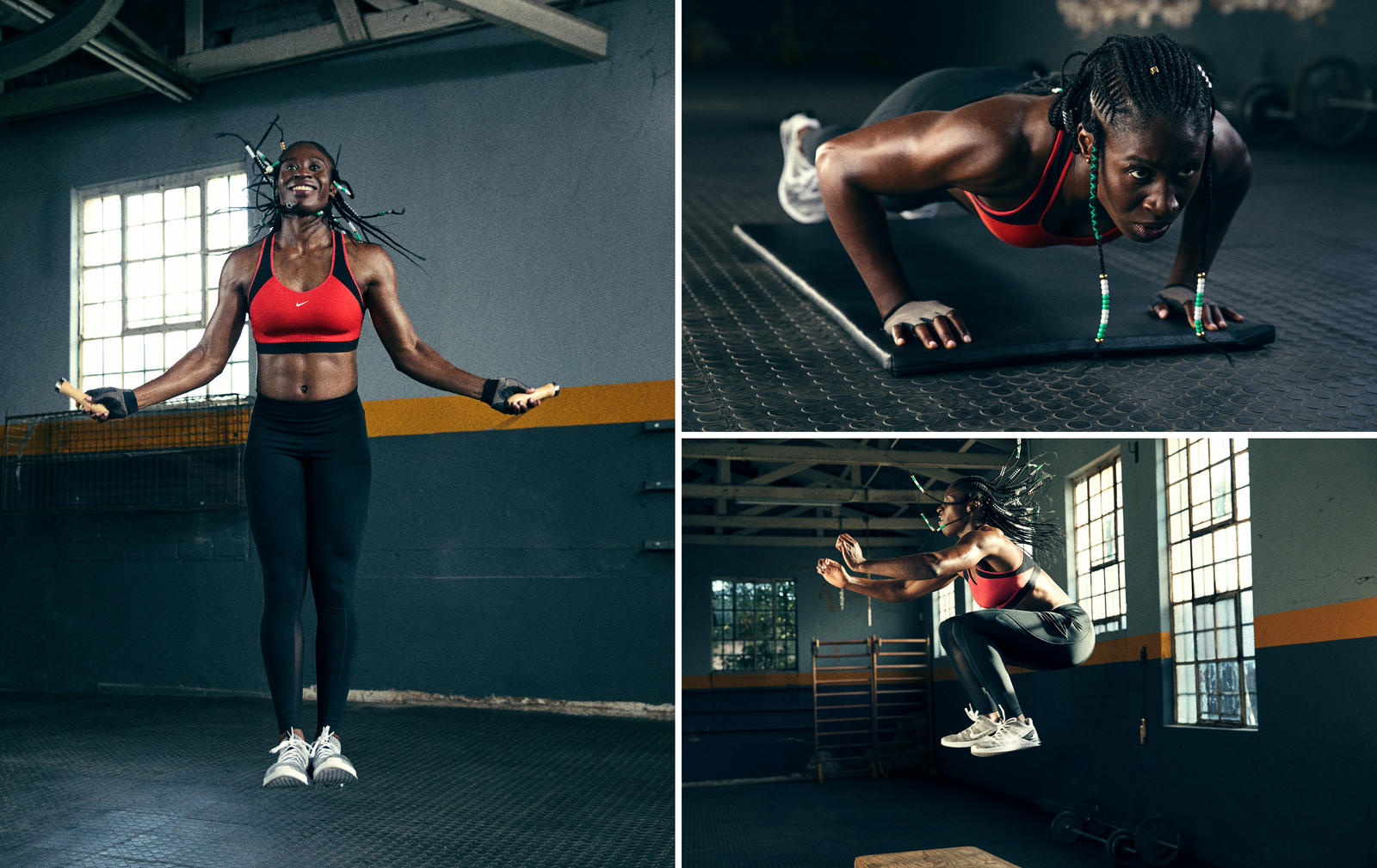 Adeagbo relies on explosive jumping movements, including jumping rope and box jumps, and strengthening exercises, such as plank variations, to get in top shape.

And she’s doing that without the help of a trainer or a coach. “I’ve literally dusted off my old training books from my days as a track and field athlete,” says Adeagbo, who wrote down every single training workout she ever did during that time.

One thing Adeagbo quickly realized she would need expert help with was footwear. “Footwear is a really, really important component of the sport, because in skeleton you use your feet to steer the sled,” she says. So, on October 7, she emailed an old friend from her former days as a Nike footwear product line manager, Tobie Hatfield, a senior director of athlete innovation, to ask about her options.

Hatifeld replied immediately, mentioning that he had designed skeleton spikes for Nike athletes in the past (he has made skeleton sliders for Tristan Gale who won gold at the 2002 Games in Salt Lake City, Utah, bobsled shoes for Prince Albert of Monaco for the same Games and, most recently, skeleton sliders for Katie Uhlaender for the 2010 Vancouver Games) and that he’d like to design a shoe for her. Hatfield and his team of about 25 designers and engineers started by using the tooling (composed of the plate and spikes) from a shoe they had designed for bobsled that incorporated insights from a track spike. From there, they engineered the spikes to the exact needs of skeleton.

“They’re called brush spikes,” Hatfield explains of the 503 tiny, super-sharp individual spikes under the Nike Zoom Slider’s forefoot. “A machine is used to carve out and then sharpen each spike from a solid block of stainless steel. It's super labor-intensive and it takes a lot of time.” About 60 hours, to be exact. The spikes are critical for solid traction on ice.

Once the outsole was complete, they added a small foam insole in the heel and put the upper on. Because skeleton is a head-first sport and the athletes use their toes to help steer the sled, stabilize themselves when going around a corner and to break at the bottom, they added a toe cap to the shoe.

“We had to focus on keeping the athlete warm and dry in very cold and wet conditions,” explains Hatfield. “The biggest attribute of the Nike Zoom Slider is to make it very aerodynamic. With speeds around 80 mph, it’s imperative we give the shoes a nice slip-stream through the air, thus why we cover up the laces with a faring and make the heel as round as possible as that is the leading edge down the hill as she slides.”

Adeagbo first wore the spikes during her last two qualifying races in Park City, Utah, which was just over one month after she emailed Hatfield. She told Hatfield that she needed a more durable toe cap and the zipper shifted from the medial side to the center so that as she’s descending nothing will distract her or potentially get caught and slow her down. 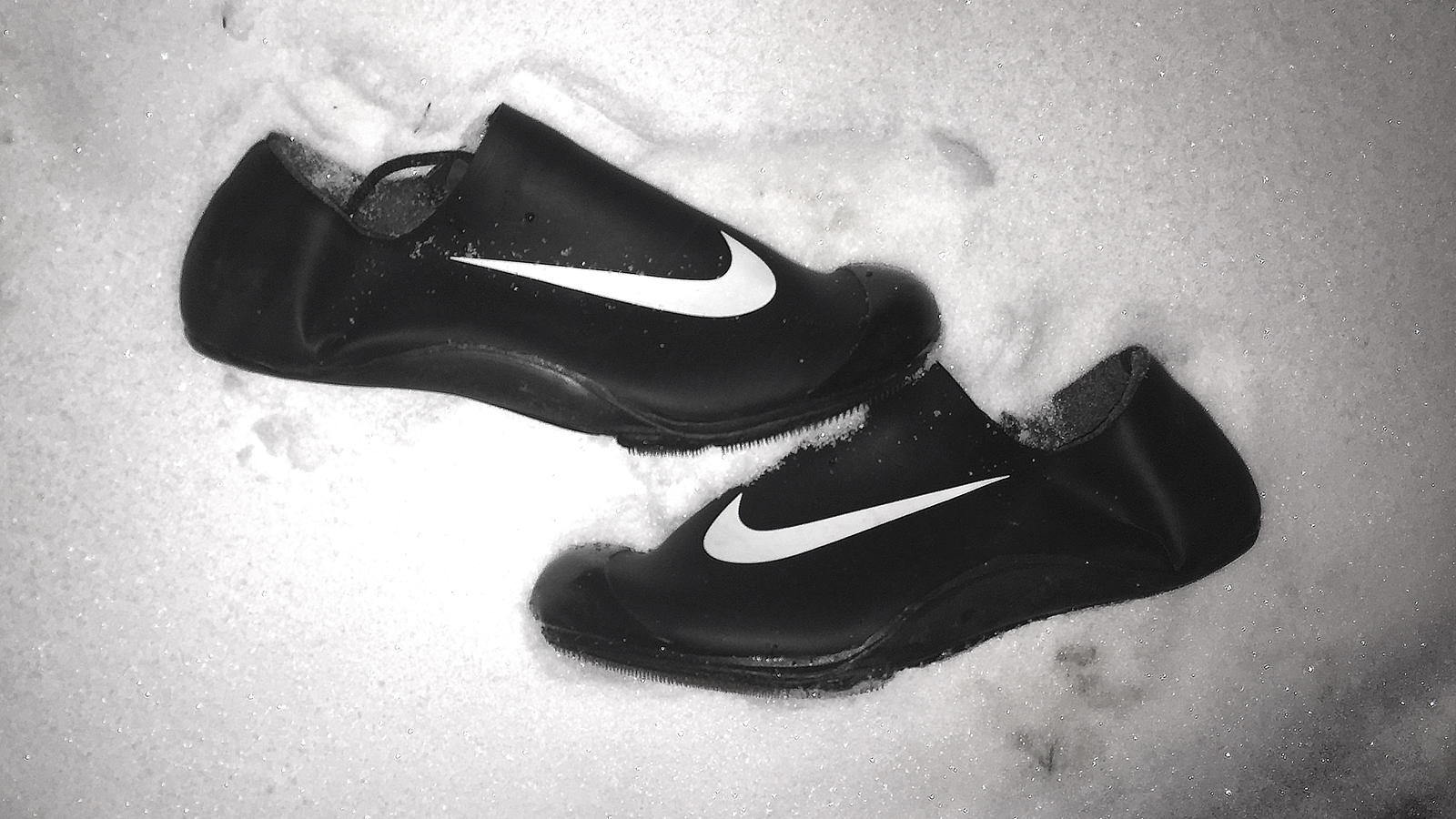 Adeagbo, who's currently in Lake Placid, New York, snapped a photo of the latest version of the Nike Zoom Slider spikes she'll wear for her last qualifying race on January 11.

Hatfield is still working on the final version of the spikes that Adeagbo will wear if she makes it to South Korea. “I’m working with the design and development teams at the Builder Lab [Nike’s on-campus rapid prototyping and innovation space] to fine tune the look, fit and feel of the spikes that I’ll wear in PyeongChang,” she says, which includes refining the lacing system.

“Simi represents what the power of sport can do to move the world forward, and for me, one of the best parts of her journey is getting the opportunity to create and innovate for not only an employee, but a friend,” says Hatfield. “Most everything is cut, stitched, pressed and injected here [in two buildings at Nike’s World Headquarters in Beaverton, Oregon]. We make shoes top-to-bottom for athletes all the time, but rarely do we have the opportunity to do it for an employee.”

The significance of this whole opportunity — from quick-turn custom shoes to one more shot at her dream — is not lost on Adeagbo. “When I retired from track and field, I didn't expect that I would have a second chance at the Olympics — and I would have never thought that I’d be a winter Olympian,” she says. “But when I saw the article about the bobsled ladies, it wasn't so much my personal Olympic dreams that grabbed me, it was more of the meaningful nature of what they were trying to accomplish that really inspired me.”

That accomplishment goes beyond herself and her new sport. “Ultimately, for me, this is about breaking barriers in winter sports. It’s about making history. And leaving a legacy. It's about moving sport forward,” she says. “That's so much bigger than just me being an Olympian.”

Adeagbo is currently ranked 84th in the world. In order to qualify in skeleton for PyeongChang, an athlete has to be the top athlete in the sport from their country and to have competed in five races on three different tracks in the last two seasons. But because Adeagbo started the sport this year, that means that this requirement needs to be met this season. She completed her first-ever race on November 12, and so far, she’s checked all these boxes with the exception of the final race, which will happen on January 11, 2017, in Lake Placid, New York. Qualifiers will be announced from January 14 to 16. If she gets it, she’ll join the three Nigerian women bobsledders who recently became the first athletes from Africa to qualify for the Olympics in the sport, and Nigeria will have its biggest-ever Winter Olympics representation in PyeongChang.