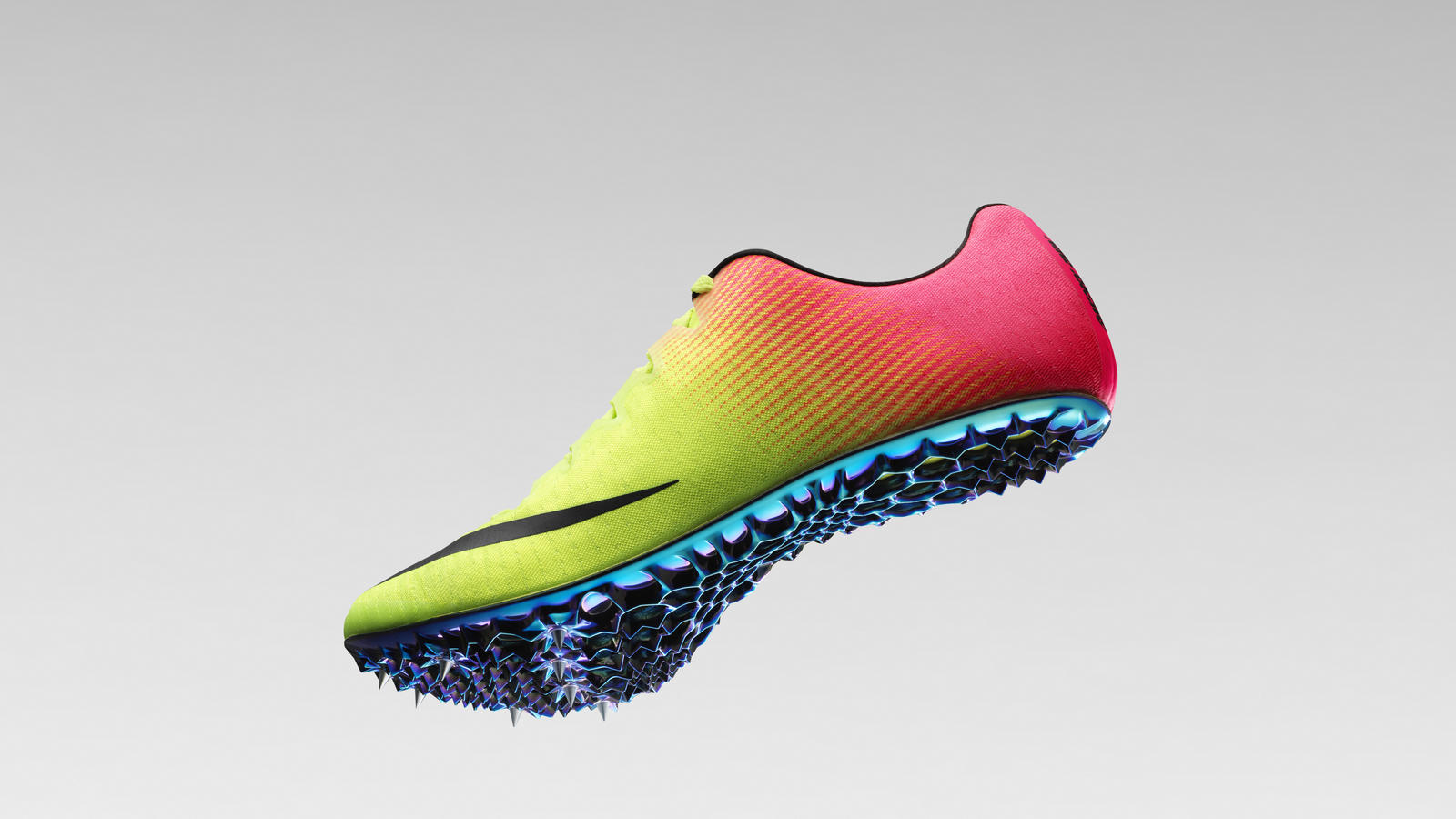 The 100 meters, for all its brevity, is best understood as a series of moments. Sprint experts break the event into three phases — drive, maximum velocity and maintenance. Sprinters tackle these phases through either a stride-rate or stride-length approach, meaning some sprinters are superb off the blocks; others, expert at catching pace deep in the dash. The rare runner who can master all phases breaks records.

Jamaican Shelly-Ann Fraser-Pryce is a prototypical stride-rate runner. Her game is bolting to the lead (maximum velocity) and then fighting (maintenance) to keep her position through to the finish. Standing at just 5 feet 1 inch, Fraser-Pryce offsets her lack of leg length with an unprecedented technical command of the race. That mastery has won her three world championships, along with gold in Beijing in 2008 and London in 2012. Yet, for all her success, she’s not lost sight of a personal goal: shaving one tenth of a second off her best race time: 10.70. 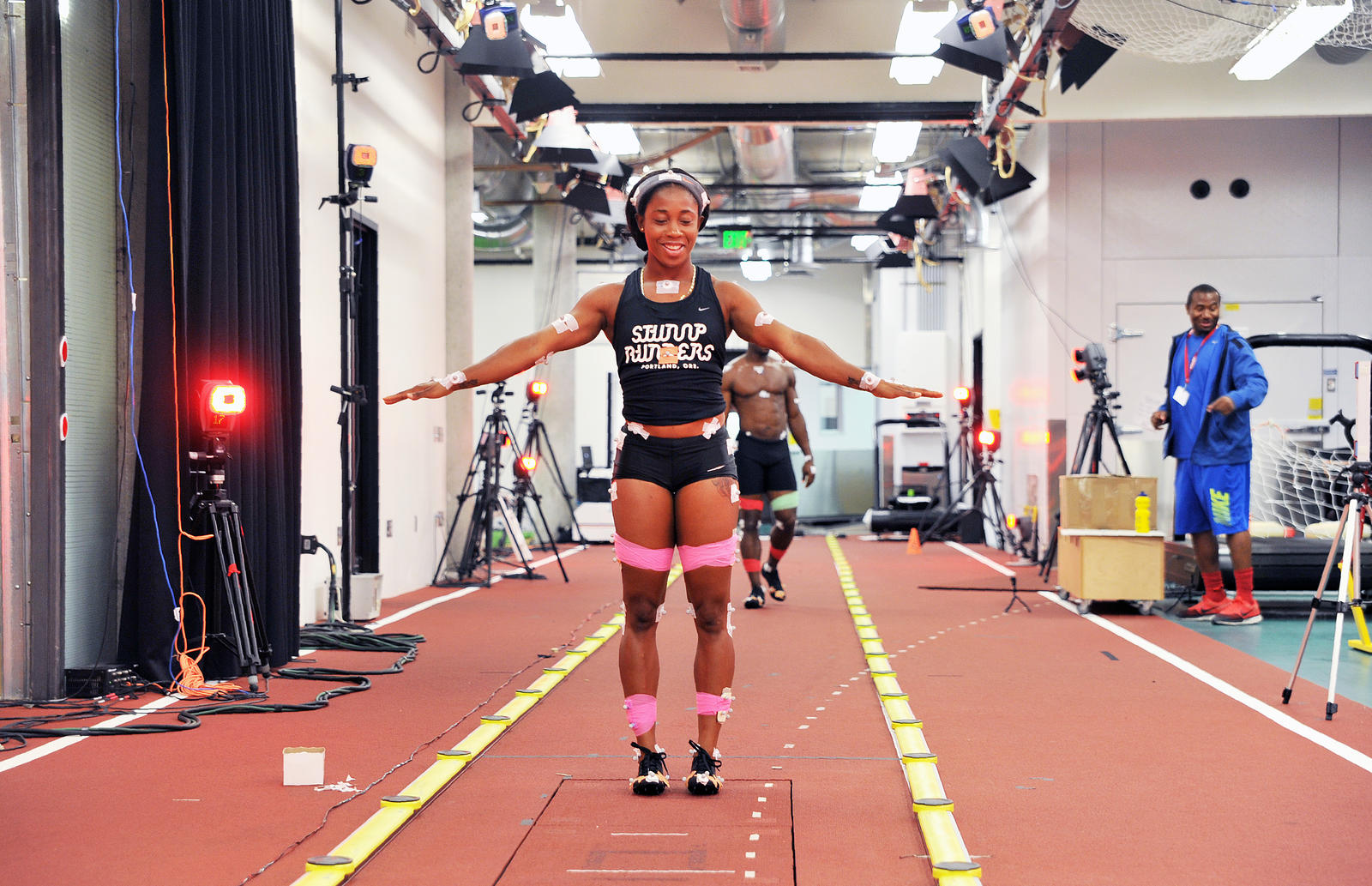 That goal brings us back to moments. Fraser-Pryce knows she’s unbeatable through 70 meters. But between that point in the race and 80 meters is when she’s got to battle to maintain her lead. It’s there, within the minutiae of the 100-meter dash, that the Nike Zoom Superfly Elite story begins — the place where a cross-functional Nike team (designers, engineers, scientists, runners and more) dug into the performance possibilities of a sprint spike.

The team examined why Fraser-Pryce felt fatigue at this stage. They captured data to measure her speed off the blocks and on the track — further defining her stride characteristics. With this information, they fixated on propulsion and a vital feature of any great running tool: energy return. To optimize that coveted rebound off the track (pushing Fraser-Pryce past fatigue), the group sought to deliver the ideal plate stiffness for the sprinter’s power and foot size. 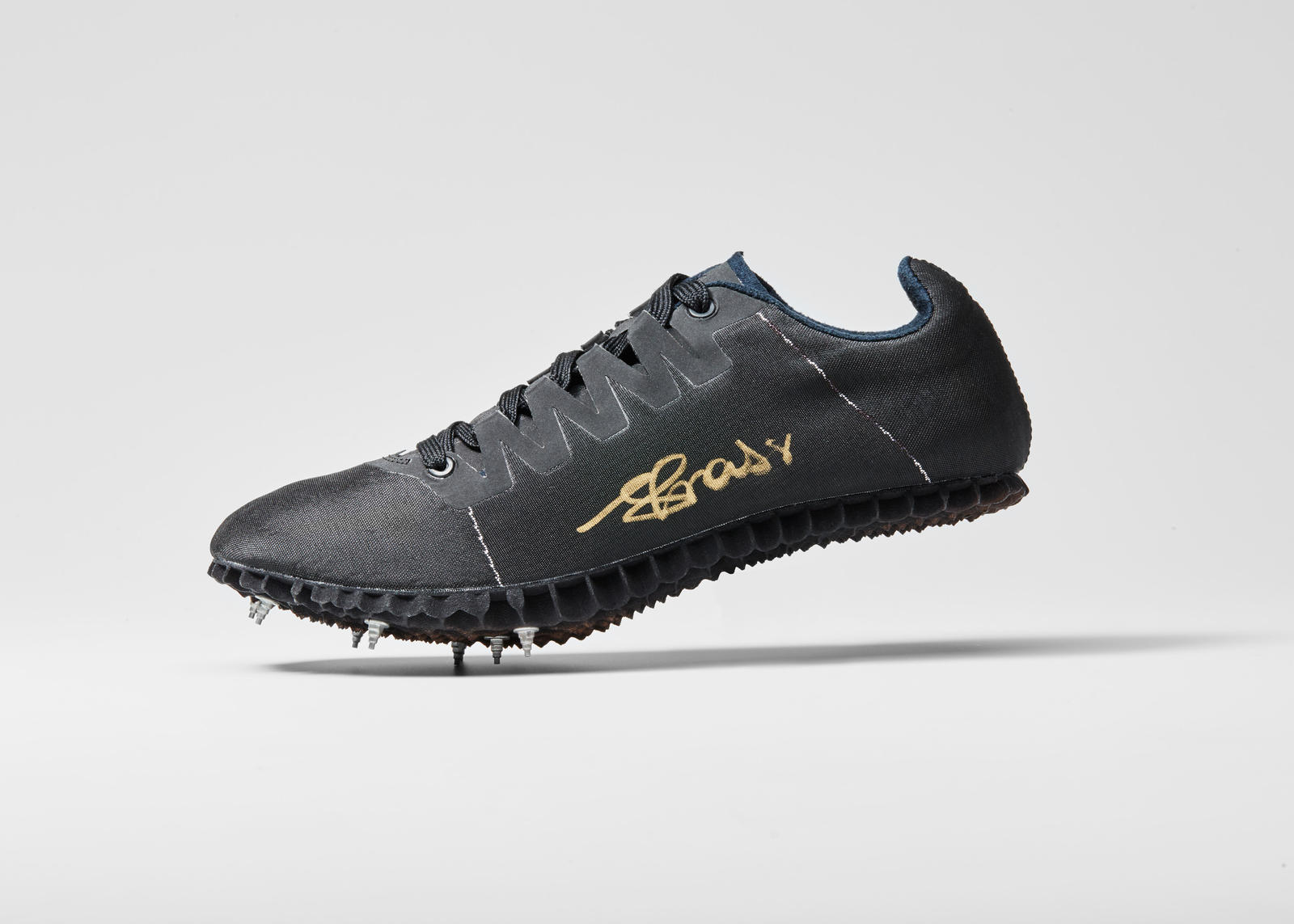 An early iteration of the Nike Zoom Superfly Elite, signed by Shelly-Ann Fraser-Pryce, with a 3D-printed outsole. 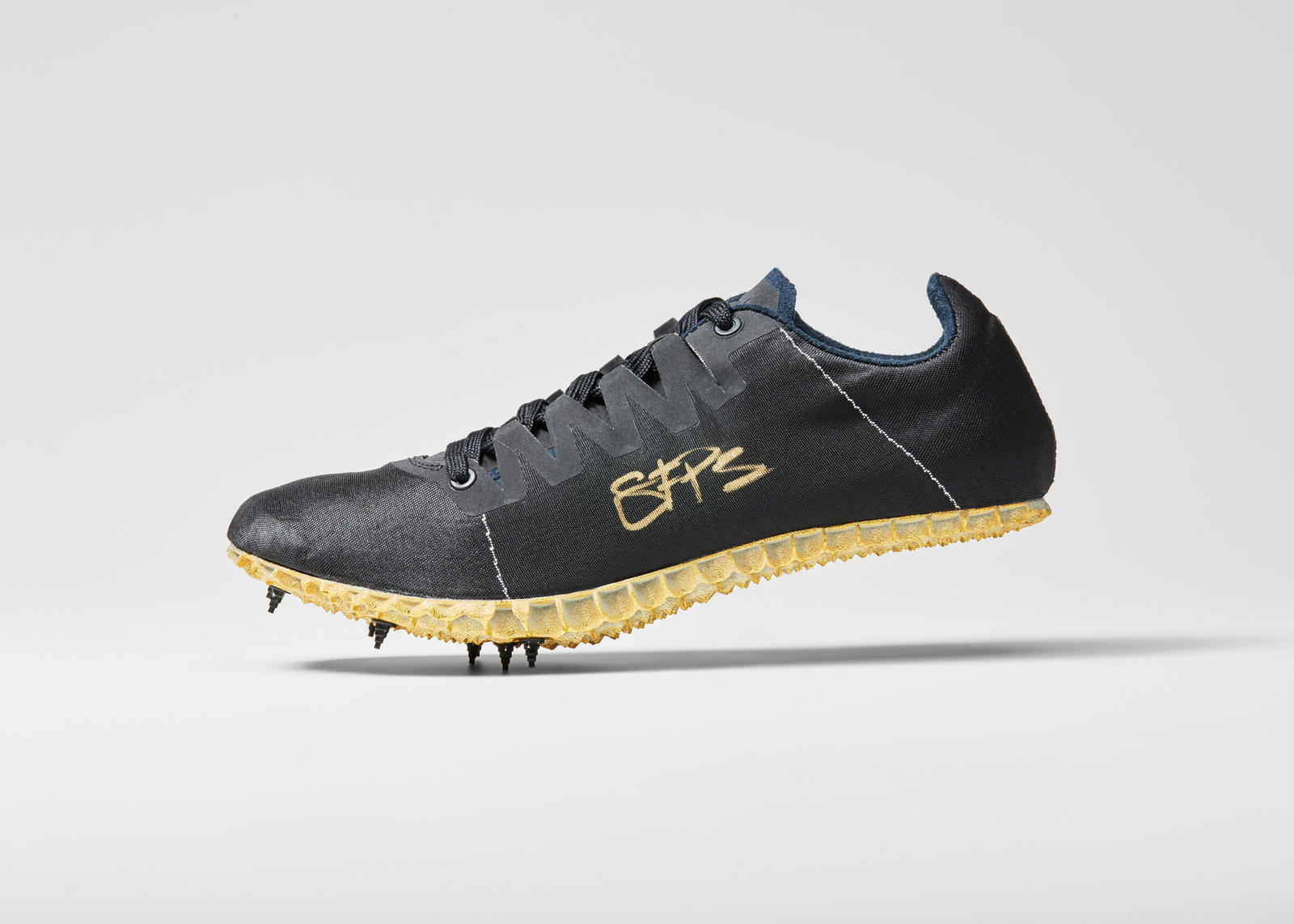 Another early iteration of the Nike Zoom Superfly Elite, signed by Shelly-Ann Fraser-Pryce, with a 3D-printed outsole painted gold. 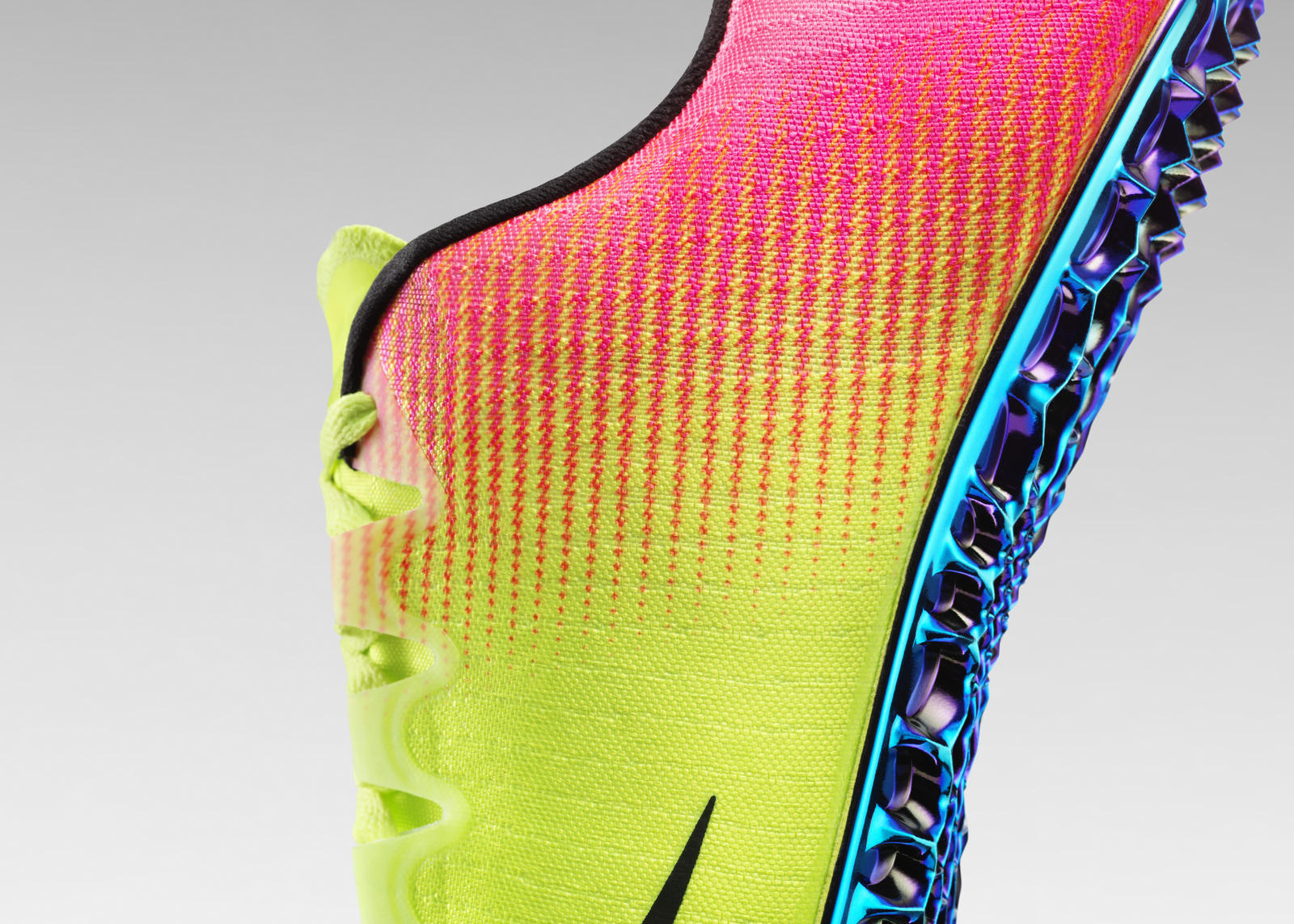 The unlimited colorway of the Nike Zoom Superfly Elite. 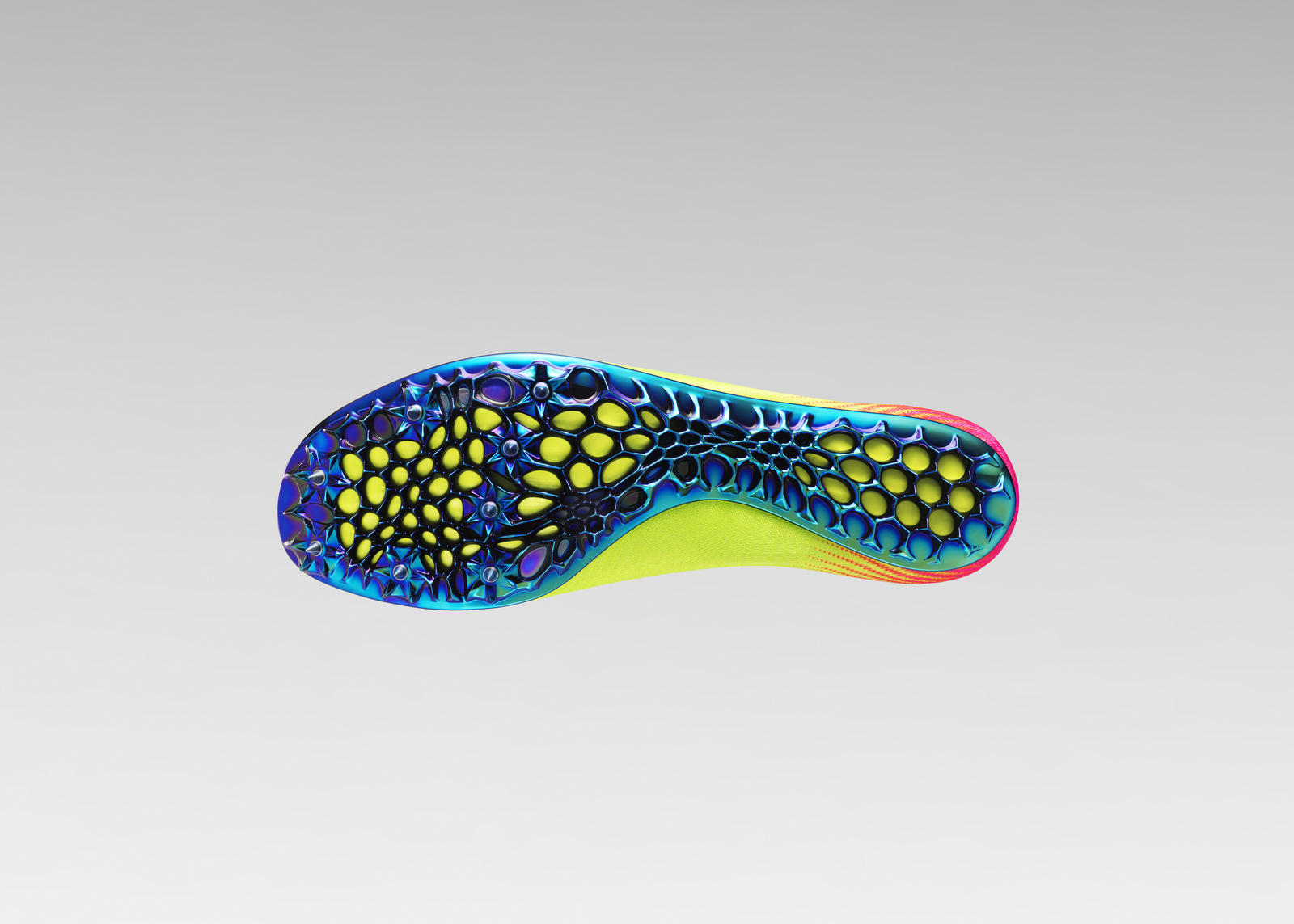 The outsole of the Nike Zoom Superfly Elite, made using computational design inspired by ocean organisms.

Their first cues came from nature, with ocean organisms providing a geometrical structural that was both light and stiff. Computational design and rapid 3-D prototyping next allowed for a pace of testing fitting of the 100 meters itself: The team quickly produced an array of plates yielding a comprehensive understanding of how much and where stiffness suited Fraser-Pryce’s needs. Additionally, the process allowed the above-mentioned organic structures to commune with the natural motion of the foot, leading to the creation of a spike plate that eliminated traditional screw-in spikes in favor of fixed pins and an increase of secondary traction. This ensures the foot is closer to the track and, thus, faster off it. Add all the advances together and Fraser-Pryce is moving quicker, for longer, and getting incrementally closer to her next personal best.

The beauty of the design doesn’t end with Fraser-Pryce’s times or the plate’s bewitching aesthetic. Thanks to its method of creation, scaling the innovation to meet the individual needs of runners of all sizes, and distances, is not only feasible, it’s fast.