A First Look at Oregon’s “Most Important” Uniform

On September 9, the University of Oregon football team will hit the field in a brand-new Nike Vapor Untouchable uniform and cleat performance system designed in partnership with OHSU Doernbecher Children’s Hospital to win the game and the fight against cancer. The head-to-toe look features inspiring graphics, modern use of color fades and camo patterns and motivating slogans personal to three brave childhood cancer survivors. 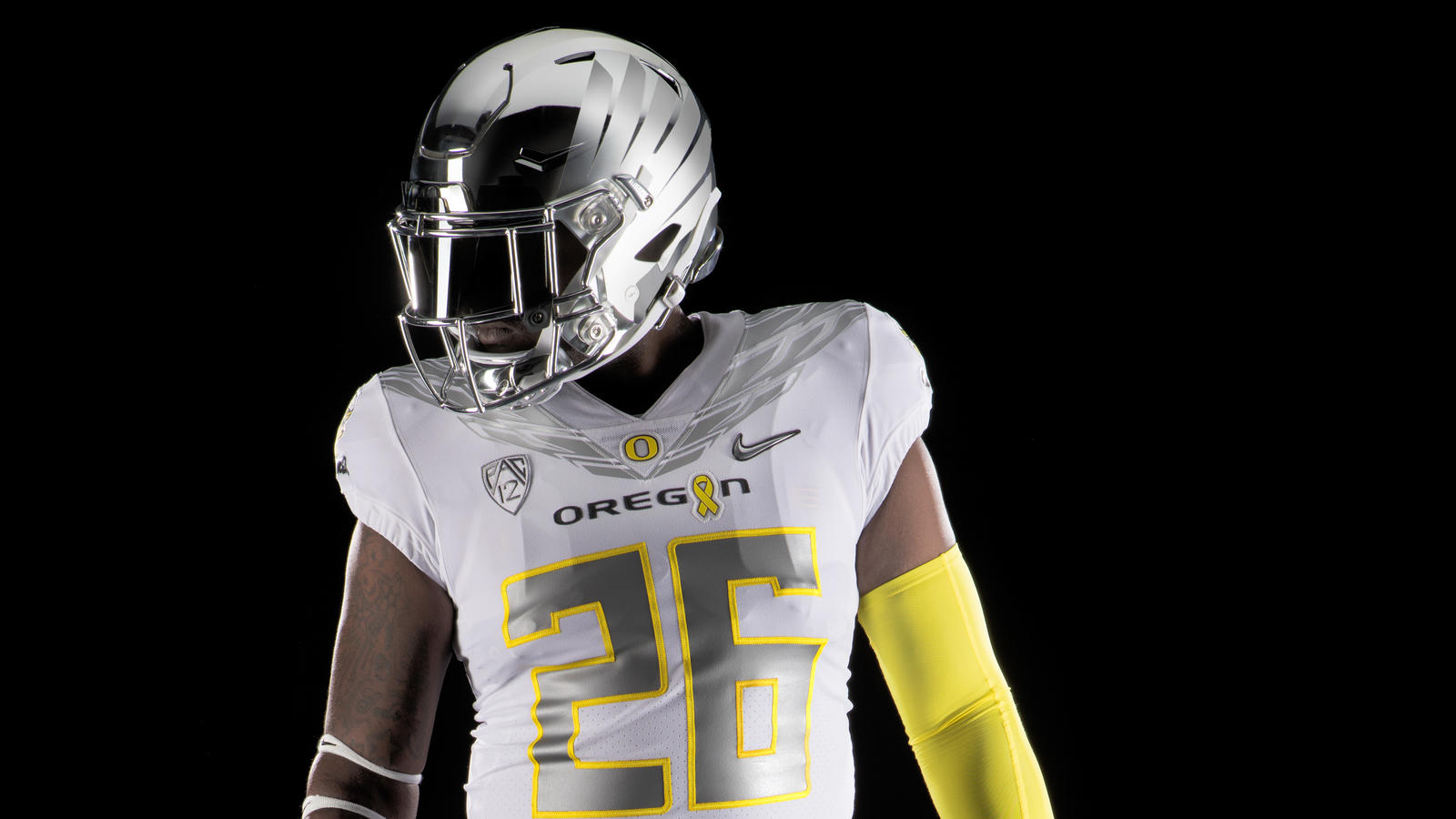 The uniform is designed by three Doernbecher patients, Nike designers and University of Oregon student athletes.

Here’s how it came to life

For the past 14 years, Doernbecher Children’s Hospital patients have been invited to team up with Nike designers and developers, with whom they create footwear and apparel collections that have raised nearly $17 million to date to help fund pioneering medical research, purchase state-of-the-art equipment, recruit leading pediatric specialists and cover the cost of care for families most in need. This year, Nike wanted to take the program further. Much further.

The new idea —to have University of Oregon student athletes and pediatric cancer survivors work together with Nike creatives to build an entire uniform system at elite performance standards as well as sideline and fan gear — came from a UO player in November 2014. He shared his thought with Todd Van Horne, Nike Football’s Creative Director, who was on their campus to discuss opportunities for raising awareness and support for the fight against cancer. Everyone was in.

The kids (shown below), their Nike designers and the U of O athletes were chosen in May, and the kick-off event — a workshop at the University of Oregon where the Nike designers, Doernbecher kids and their families along with the U of O players and staff got to work — occurred in July. “This is the first time we brought in football athletes to collaborate with kids on a full head to toe system of dress,” says Paul Sullivan, the University of Oregon Art Director for Nike. The kids met with their designers four times and the athletes twice, where they would collaborate, brainstorm, sketch and more.

Meet the teams and see their unique contributions to the uniforms 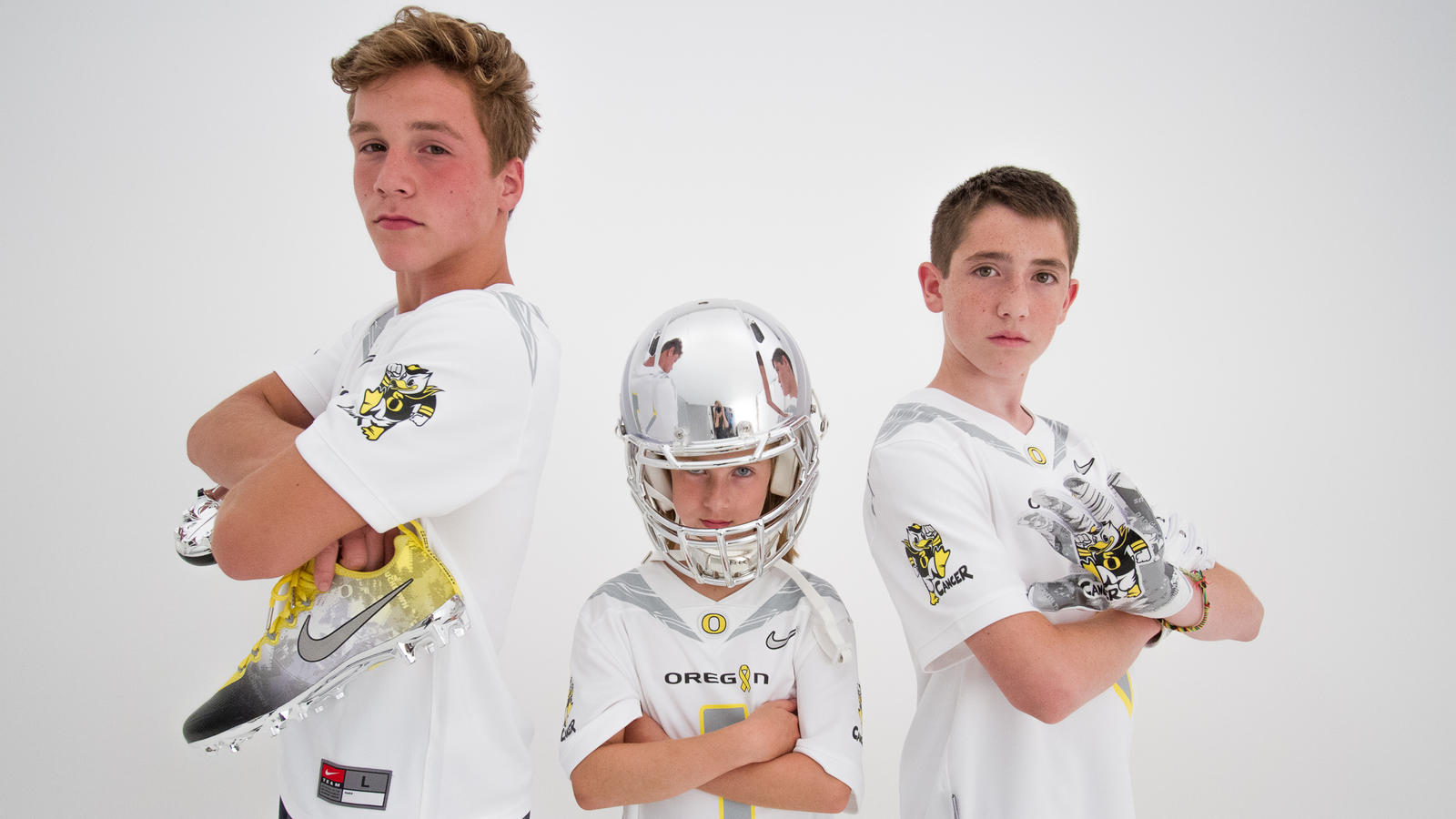 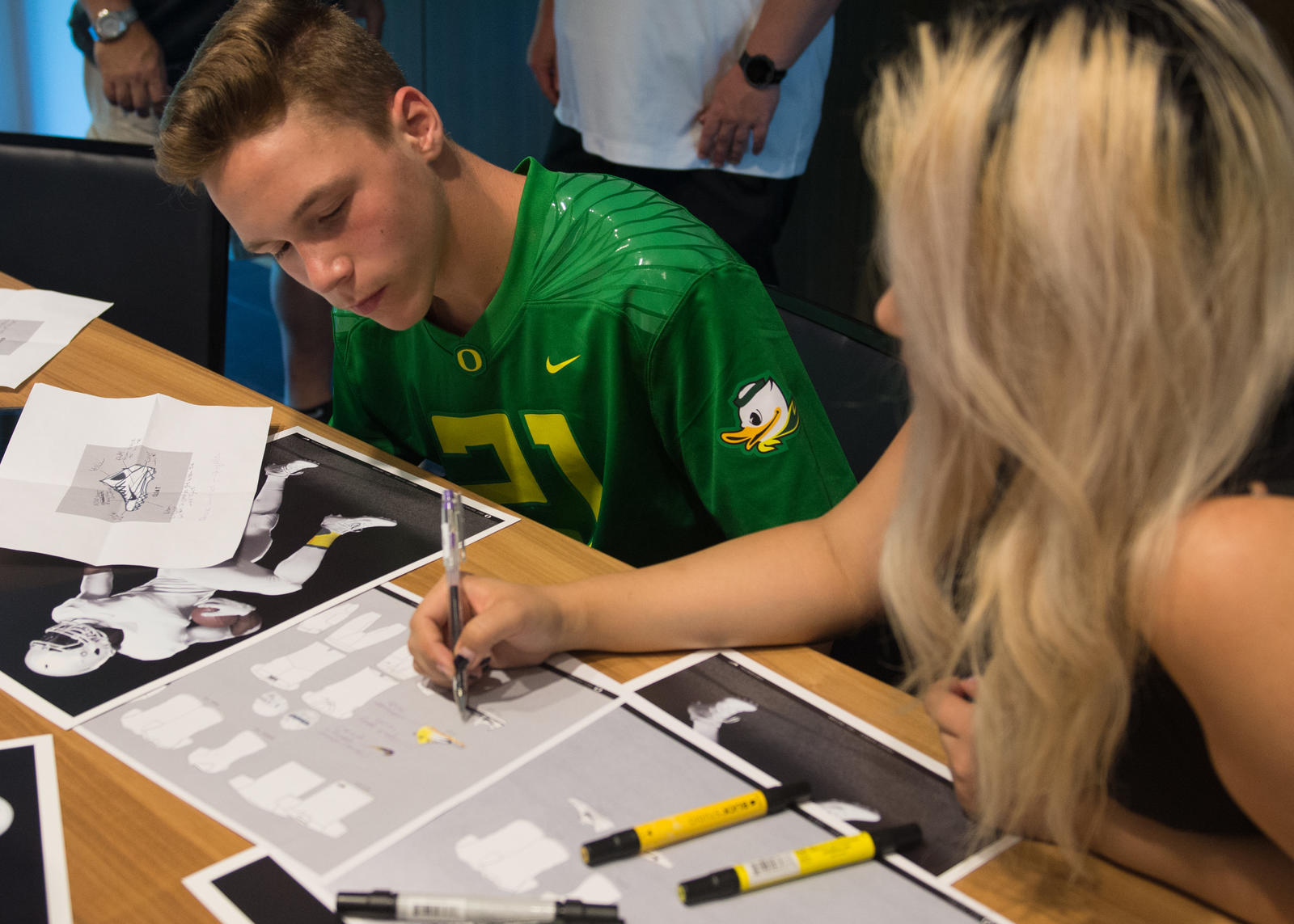 MacDonald and Beck develop the cleat. 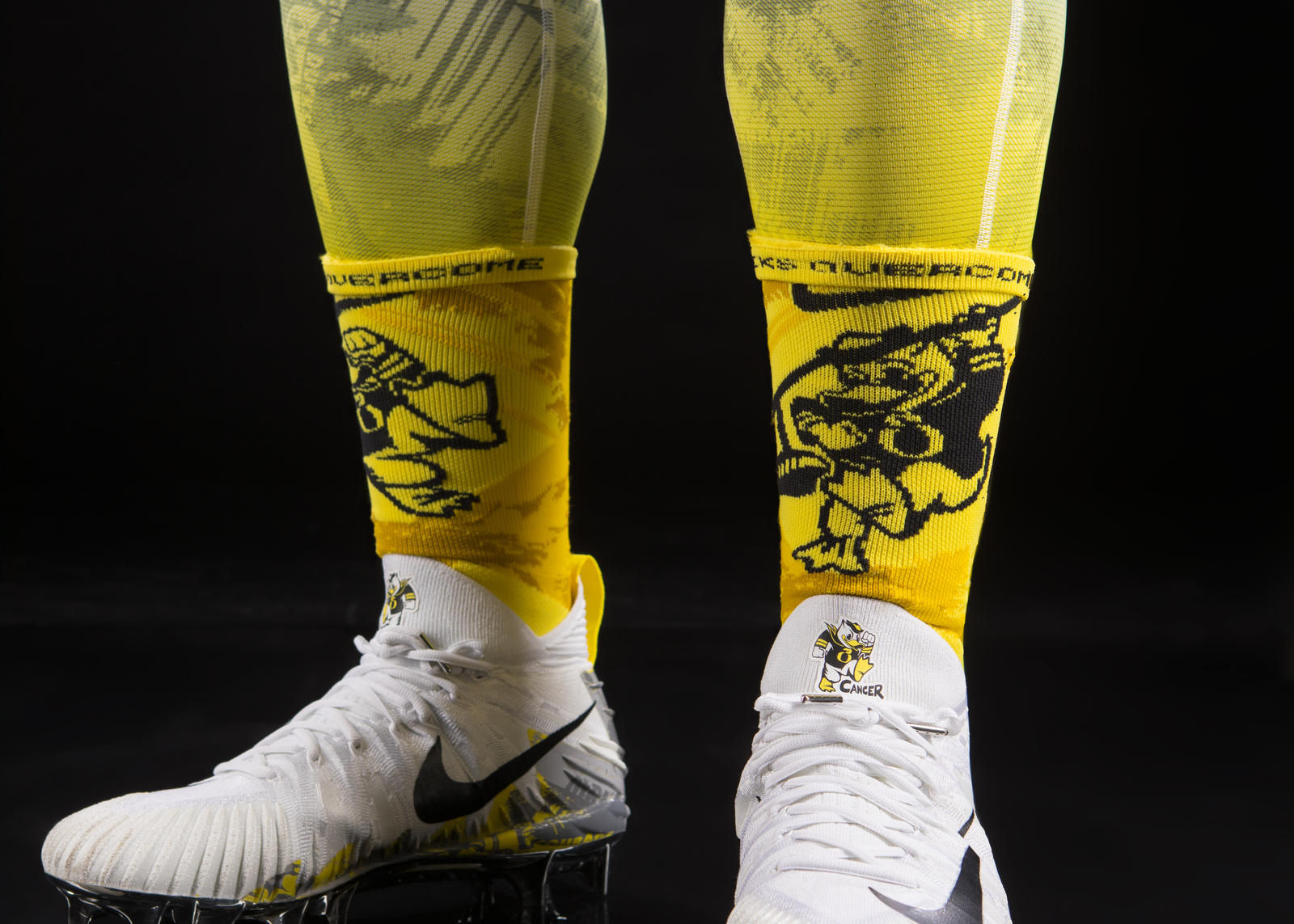 The color fade, modern camo, socks and cleats were all designed by MacDonald. 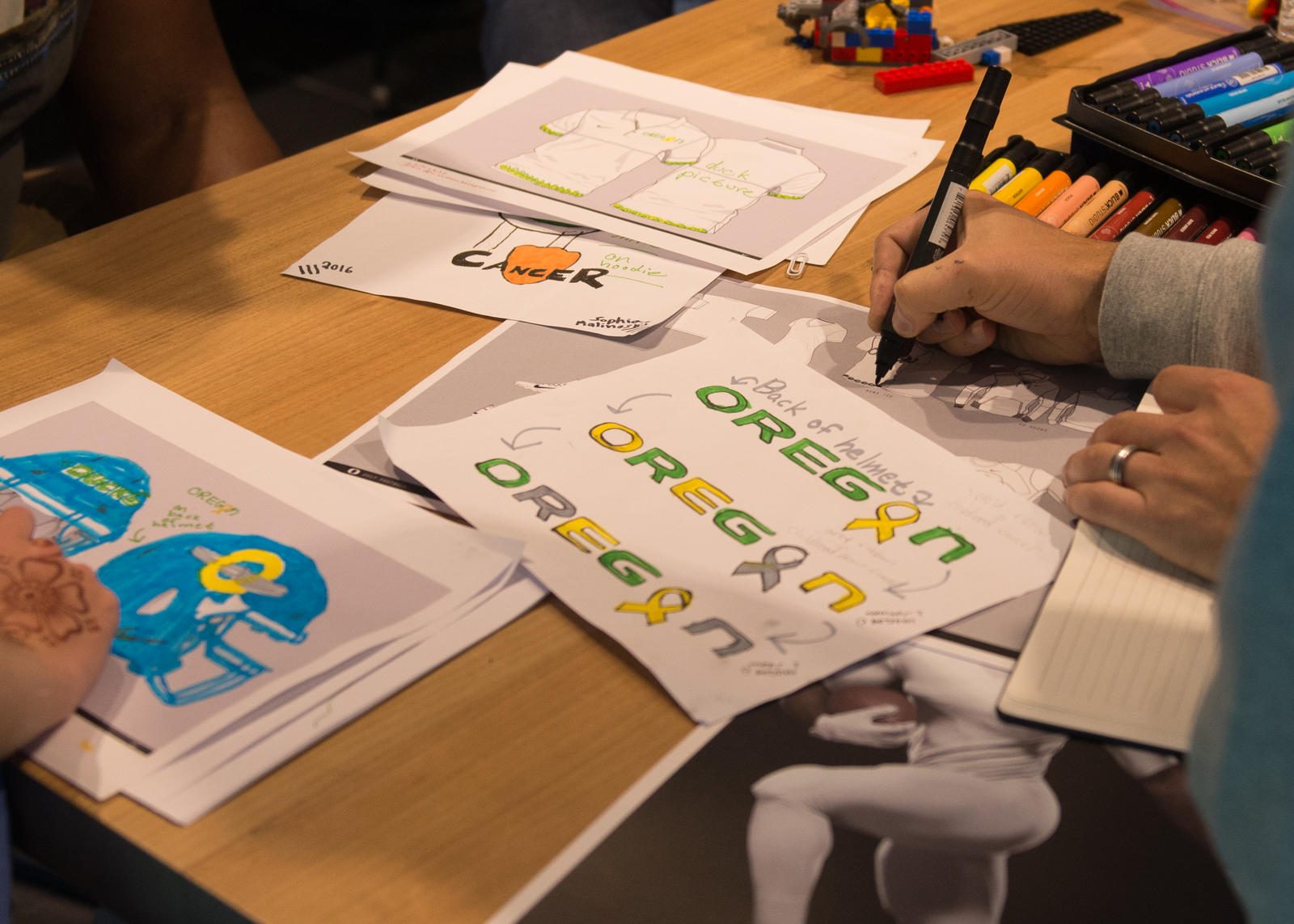 Malinoski sketches her ideas for the helmet and slogans alongside Wilmot. 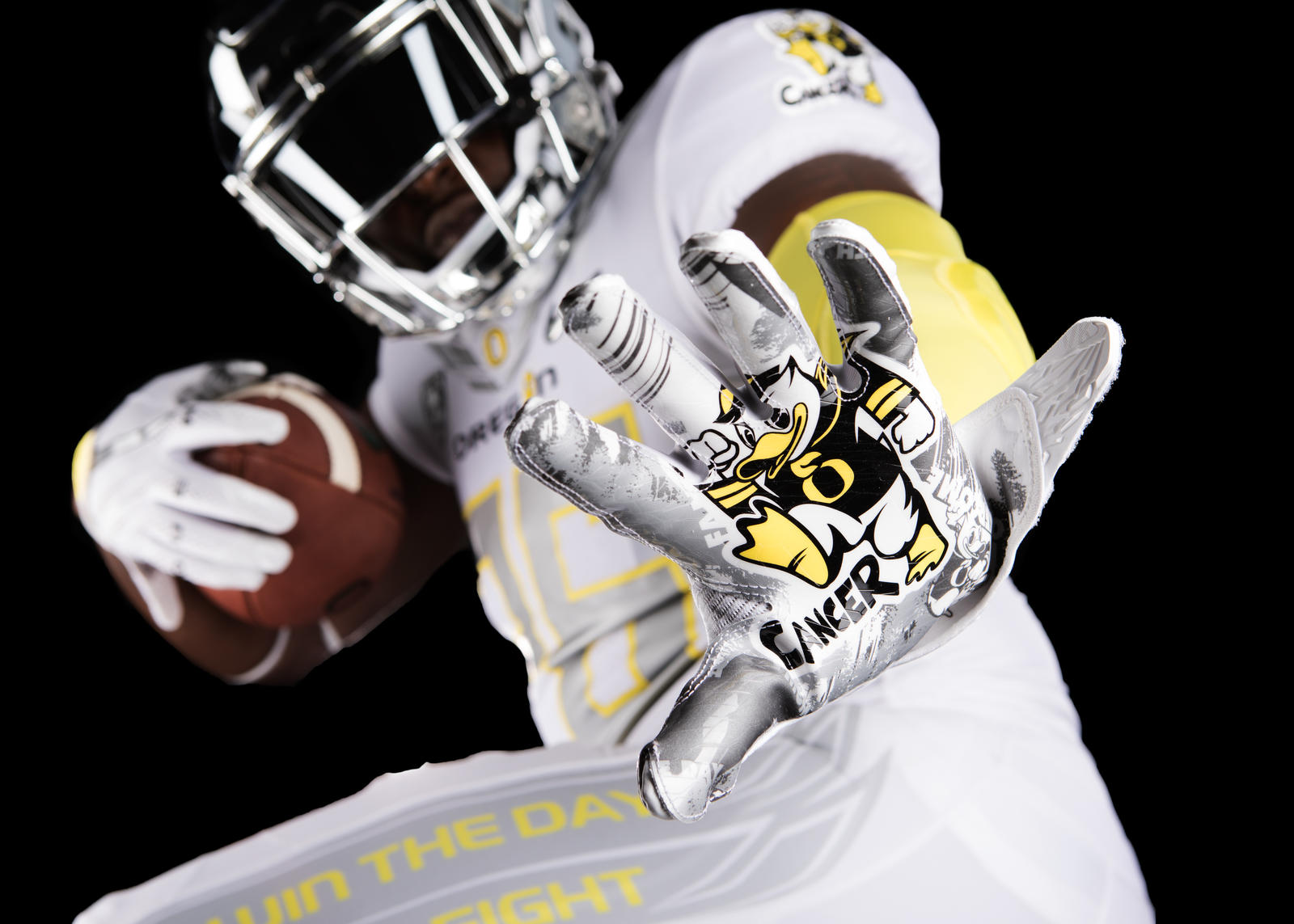 The chrome helmet and stomping duck, designed by Malinoski, make a bold statement. 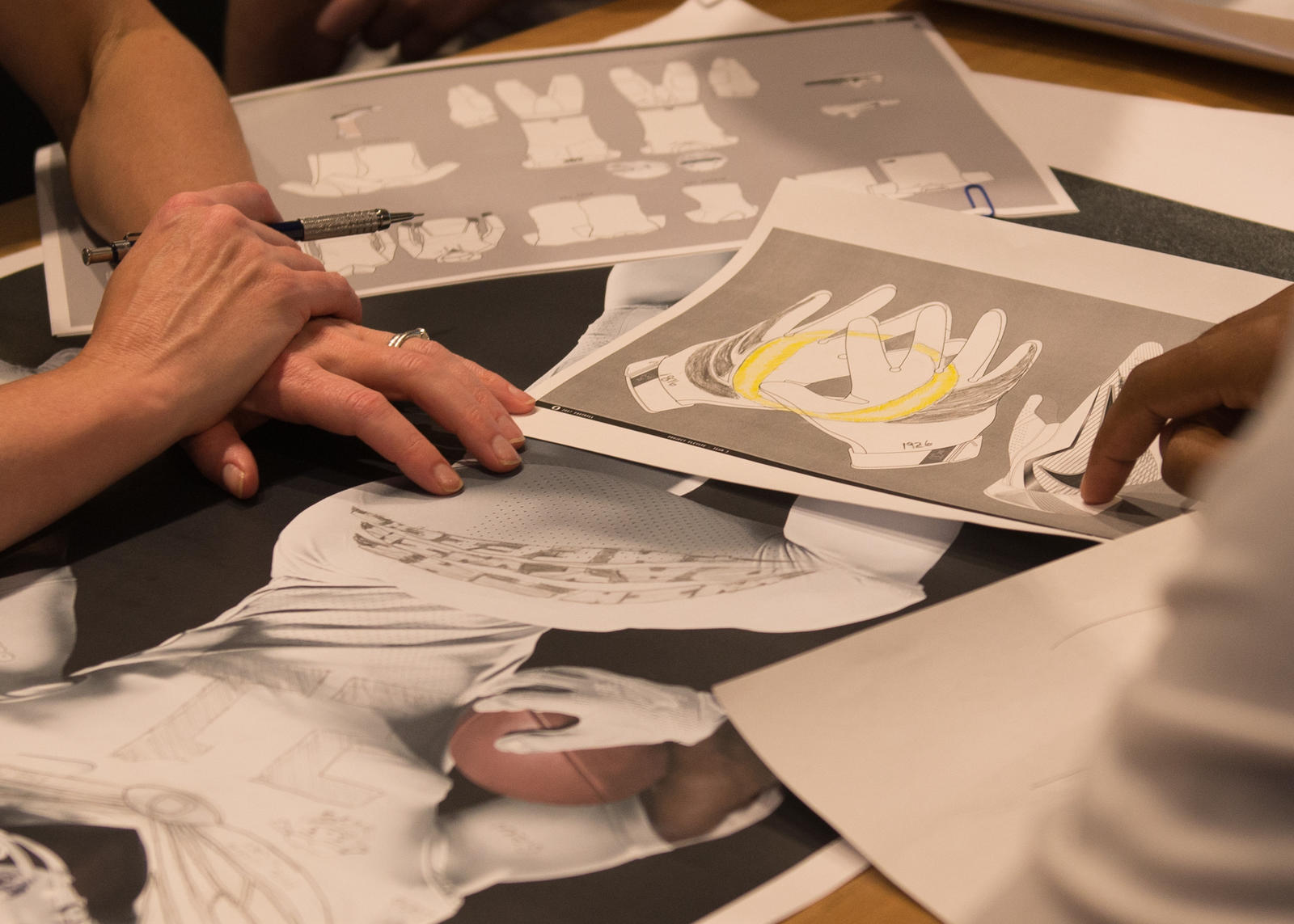 Frank works on the jersey, tights and gloves with Oliver. 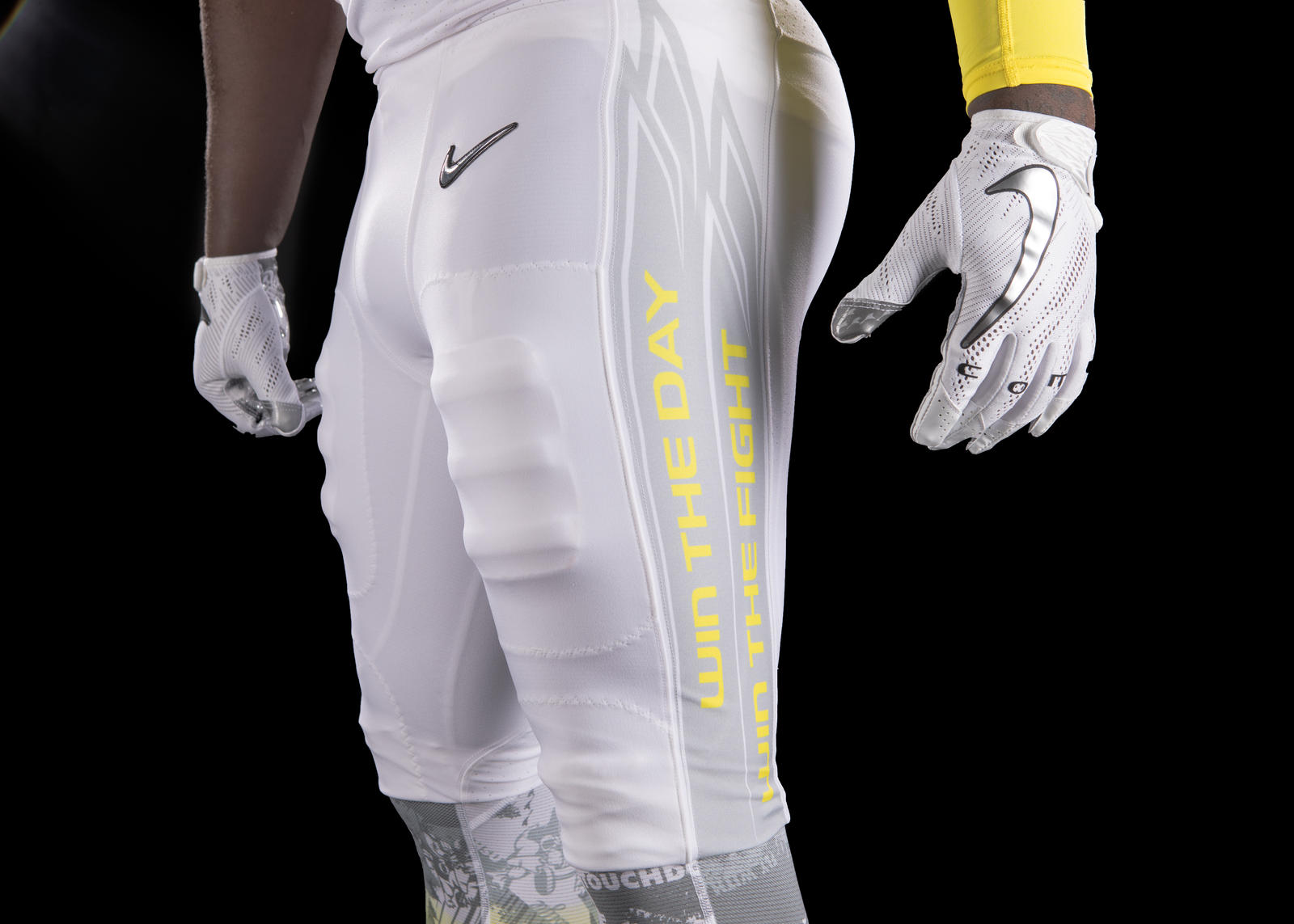 The wings span the tights and shoulders, and Frank's slogans appear on the pants and gloves.

All three kids amazed and stumped the design team along the way. “Some of the stuff they brought to the table was like, ‘Wow, I never thought of that before!’” says Sullivan. “Sophia initially wanted a bright blue helmet to represent the sky, but given Oregon's primary colors are green and yellow, we suggested making the helmet chrome to reflect the sky,” recalls Sullivan. “Sophia’s idea encouraged us to push the boundaries here.”

Also, this is the first Nike-sponsored college football team to ever print on the knuckles of the gloves. “We have ‘overcome’ on the knuckles, and we expect that to make a really big statement,” says Sullivan.

Their creativity is further layered within their designs. “There are words in the camo pattern, and those are words that have been empowering to the kids as they go through their own health journeys,” says Van Horne. “So that's why you get a mix of things from ‘chocolate’ to ‘family,’ and ‘momentum’ to ‘MRI.’”

All three kids left their mark on the uniforms in the form of signatures on the cleats and the foldout of the gloves, and decals on the back of the helmet.

“Each one of these Doernbecher designers brought in a tremendous amount of work, and it was really mind-blowing to think of all the unique creativity that they each have,” says Sullivan. (None of the children had any prior art or design experience.)

Beyond their creativity, the entire team dedicated an immense amount of time to bring their visions to life. "We worked on this project for three to six hours every weekday," says Sullivan. Once finished, Nike presented the uniforms to the kids and their families to get their approval in September of 2016.

“The kids were in awe — they couldn’t even verbalize how they felt,” says Sullivan. 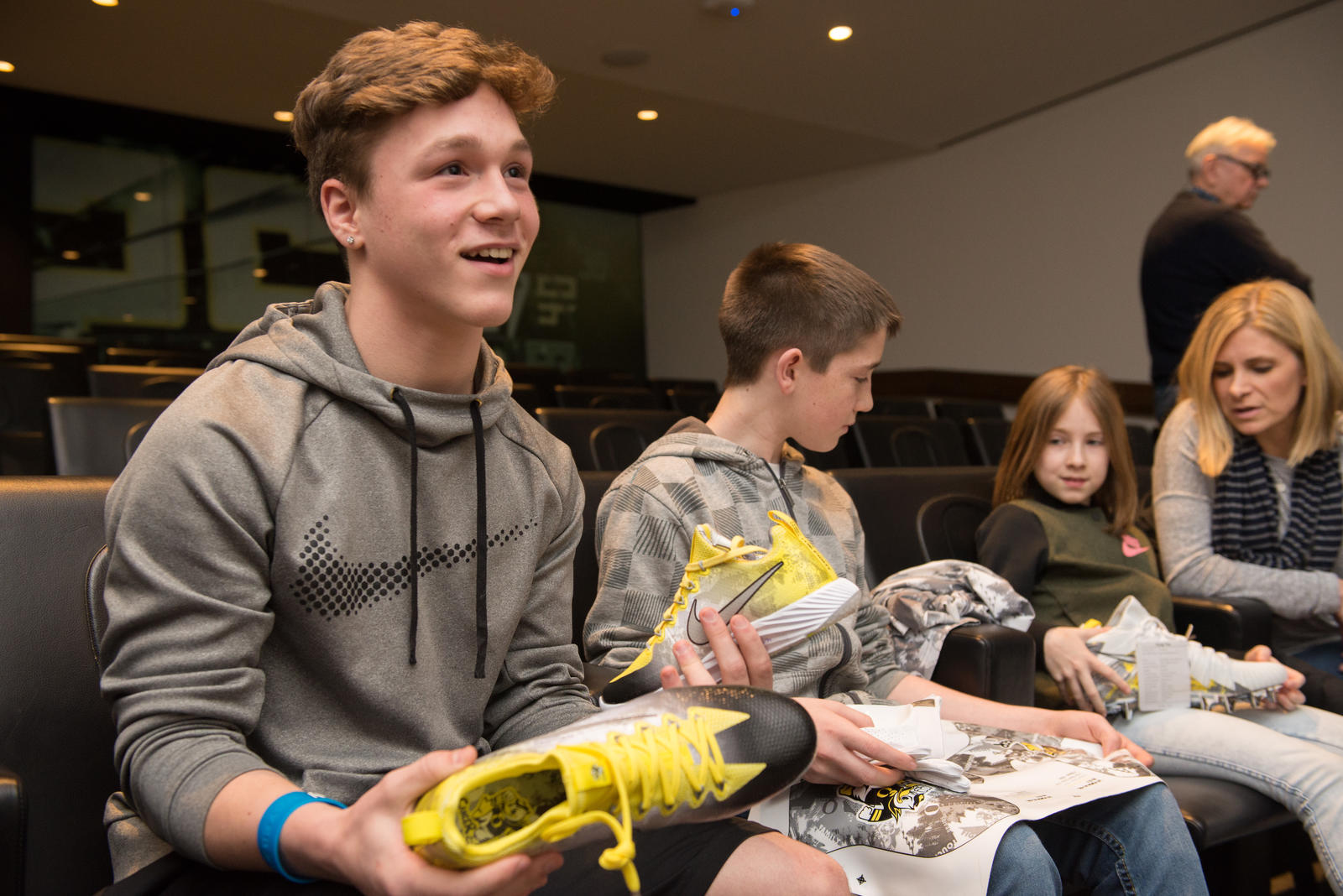 MacDonald's reaction to seeing the cleat he designed for the first time.

From there, the Nike designers and kids met with Oregon's coaches and players on campus in February of 2017 to unveil the uniforms and get their signoff.

"We will do everything in our power to play with the same tenacity exemplified by Sophia, Ethan, Joe, and wearing this uniform is a great chance to honor them and their spirit and efforts," says Willie Taggart, the team’s head coach.

That sense of honor is felt among everyone involved in the project. “I think this is the most important uniform that Oregon has ever worn,” says Van Horne. “And I really hope this helps raise the funding and awareness to beat childhood cancer.”

The University of Oregon Doernbecher Freestyle Uniforms will take the field on September 9. Sideline and fan gear, including a Nike Air Max 90 Ultra 2.0, will be available September 4 on nike.com and in select retail stores, and all proceeds from the sales of the UO gear will benefit a pediatric cancer fund at OHSU Doernbecher Children’s Hospital.