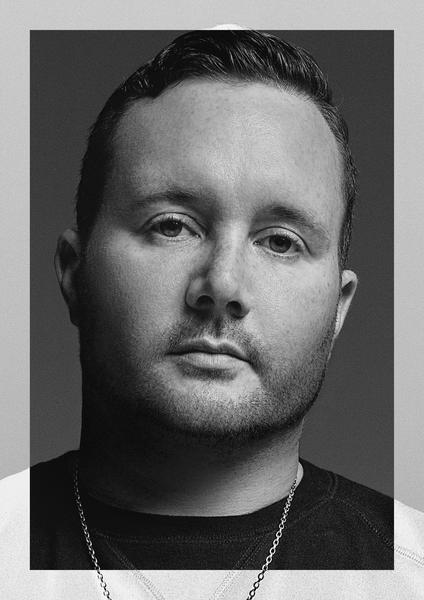 British fashion designer Kim Jones spends nearly as much time in the air as he does on the earth. He’s recently touched down in the Greek Isles; Shima, Japan; and New York City — his next stops include Komodo Island, Indonesia, to see its famous dragons, and lesser-known areas of China. Travel is also the well-trodden wellspring of inspiration for the disruptive streetwear-meets-sportswear style that has defined and cemented his eminent industry reputation. But Jones’ travel, like his designs, stretches beyond conventional classification. It includes expeditions through eras, images and memories, which in Jones’ case include East London (his hometown and the site of his first Nike connection) and his fashion archives, populated with over 500 pairs of sneakers.  As Jones explains below, it is a conceptual collage of these various journeys that informs the NikeLab x Kim Jones: Packable Sport Style collection, which is also influenced by anticipating travel to Rio and the complementary items an athlete might pack for an effortless trip.

What are your earliest memories of Nike?
Being obsessed with having to have a pair of Nikes when I was about 13, or maybe even 12, and just nagging my parents to buy them for me. I saw them and immediately wanted them.

Do you remember the early styles that you were into?
Silver Nike Vandals.

Did your original interest in sneakers come from a street-cultural standpoint or a sport standpoint?
I was cycling a lot when I was a kid so that was a lot of it. I had them for sports and they looked cool as well. Also I was a straight-edger for a while and we were all obsessed with Jordans. Everyone would go to buy their Jordan Vs. We were super excited about it and would fight over every color, because we didn’t want to have the same ones. It was typical teenage guys being obsessed. I had a group of friends who I used to hang out with all the time and we all had the same size feet, which was quite useful, so we’d all just swap stuff over.

Do you have any of them in your archives now?
I have about 500 or 600 pairs of sneakers in my archives, probably. I’ve got them in my house in London and just lots and lots of cupboards in Paris. I’ve got lots of Jordans and tons of pairs of Huaraches. When they first came out, I bought them in bulk because I loved them so much.

What is about sneakers in particular that interests you?
Now I’m interested in them because of the technology that goes into them and how they are developing so quickly and becoming really proper, serious product design. The technology side of it is the thing I really, really like — how it leads the fashion side and that becomes a lifestyle.

What else is interesting you right now?
Well, I always look at culture (more than fashion) as a reference — and travel, which is the key thing. I love going to South Africa. I really enjoy the energy down there  — also in Tokyo, New York and LA, but I like to look in different places, too. Last summer I went to Southeast Asia, which was really interesting.

Since your graduate collection, your aesthetic has most often been described as infusing street style into high fashion. Do you agree with this assessment? Is there anything you would add?
I think that is the way everything is moving forward; I was just one of the first people to do it. There was an article written today looking back on my first collection and it made me think about how far I’ve come from — it’s kind of scary. It’s been 15 years and it has gone so quickly and I’ve done so many things in that time. I refine what I do more and more.

Why are streetwear and sportswear important these days?
Because they are real. They’re in everyone’s life and filtered into everything.

You already work in the sportswear space a lot. How is the collaboration with Nike different?
I’ve always wanted to work with Nike and when they approached me it was the perfect time. I wanted to use Nike technology so we found something old and made it into something that was very new. I didn’t want the collection to look retro. I wanted it to be modern and to speak to youth today.

"I wanted to use Nike technology so we found something old and made it into something that was very new."

Speaking of youth: The color palette of the collection is a mix of club-kid neons and neutrals. How did you arrive at that combination?
All the colorways come from old Air Maxes — there’s an Air Max 95 colorway and one from a classic, original Air Max, then we added another color palette that was looking at the future. It was about taking the DNA of what Nike stuff is all about and mixing it together, taking elements of all the different things I liked and putting it together.

A number of the garments in the collection are transformative, meaning the wearer can use them in multiple scenarios. Was this a design focus?
It’s about a utilitarian approach to design and function to give the customer something they can use in different ways. That’s what I was thinking about — how to make it useful to the wearer. 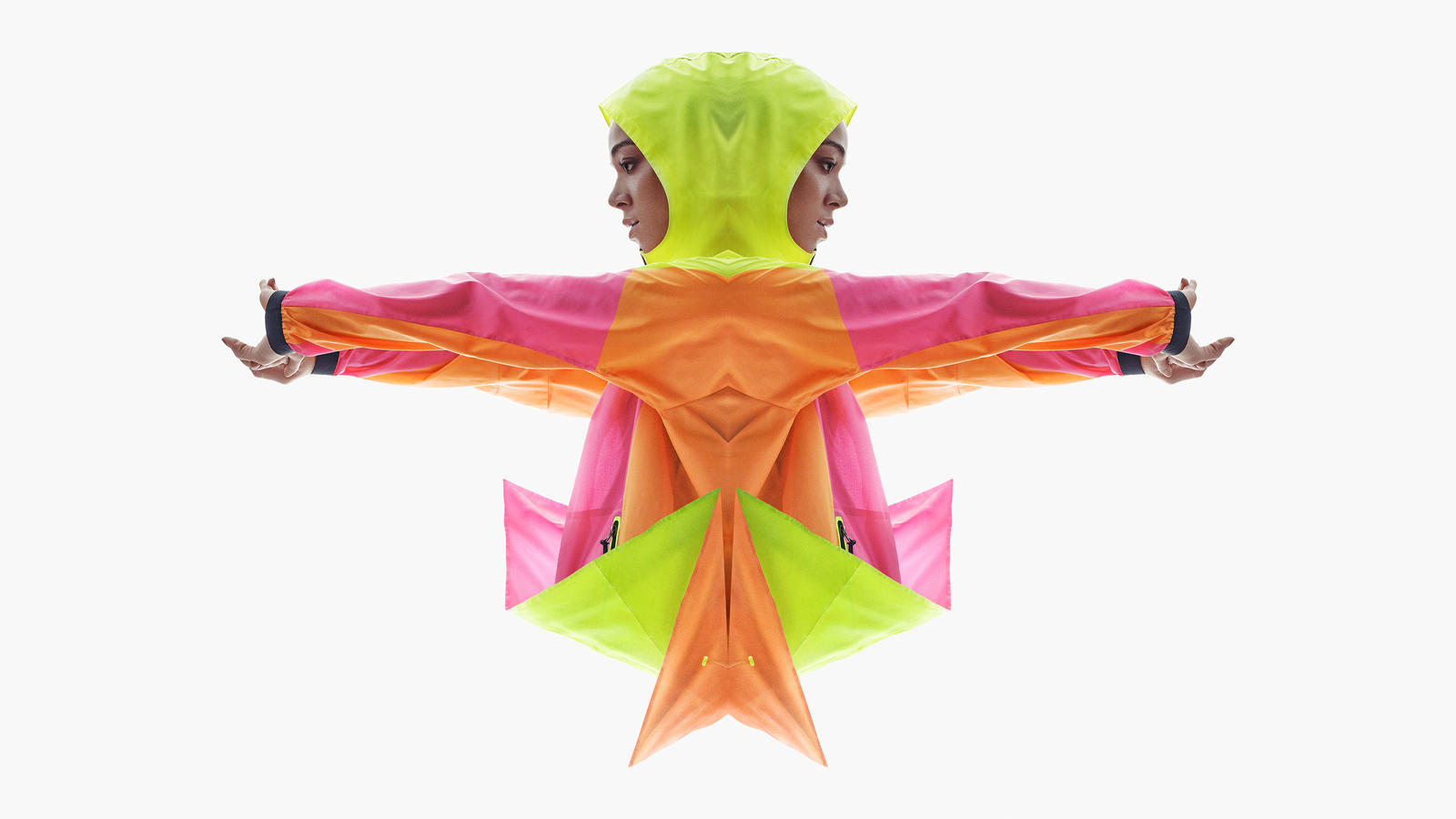 What are some details that contributed to this design approach?
It was looking at making things out of the least amount of seams so they could be lighter and smaller — really looking at the authenticity of what Nike does the best and taking the key elements and using the technology to create these products. The Windrunner is [made from] just one piece of fabric, so looking at how that would be cut and how that would be graded were the most challenging details.

How did the jacquard print on the knit tops come about?
It was actually about looking at the form of the body and Flyknit [upper] patterns when they are flat, which are really beautiful. Then, making them big and seeing how it looks in a garment. It was a great way to do a t-shirt.

The NikeLab Air Zoom LWP x Kim Jones marries inspiration from an original Zoom 95 upper with Air Max 1 last. Why did you select these particular silhouettes?
I like the fact that it has come from an old shoe but has become a completely new shoe. It took quite a few tries to get it right. At first it was too chunky and then it was too skinny. I was thinking about a shoe that I would really like to wear and be proud of. To have a Nike sneaker is an amazing thing. It’s a real honor. 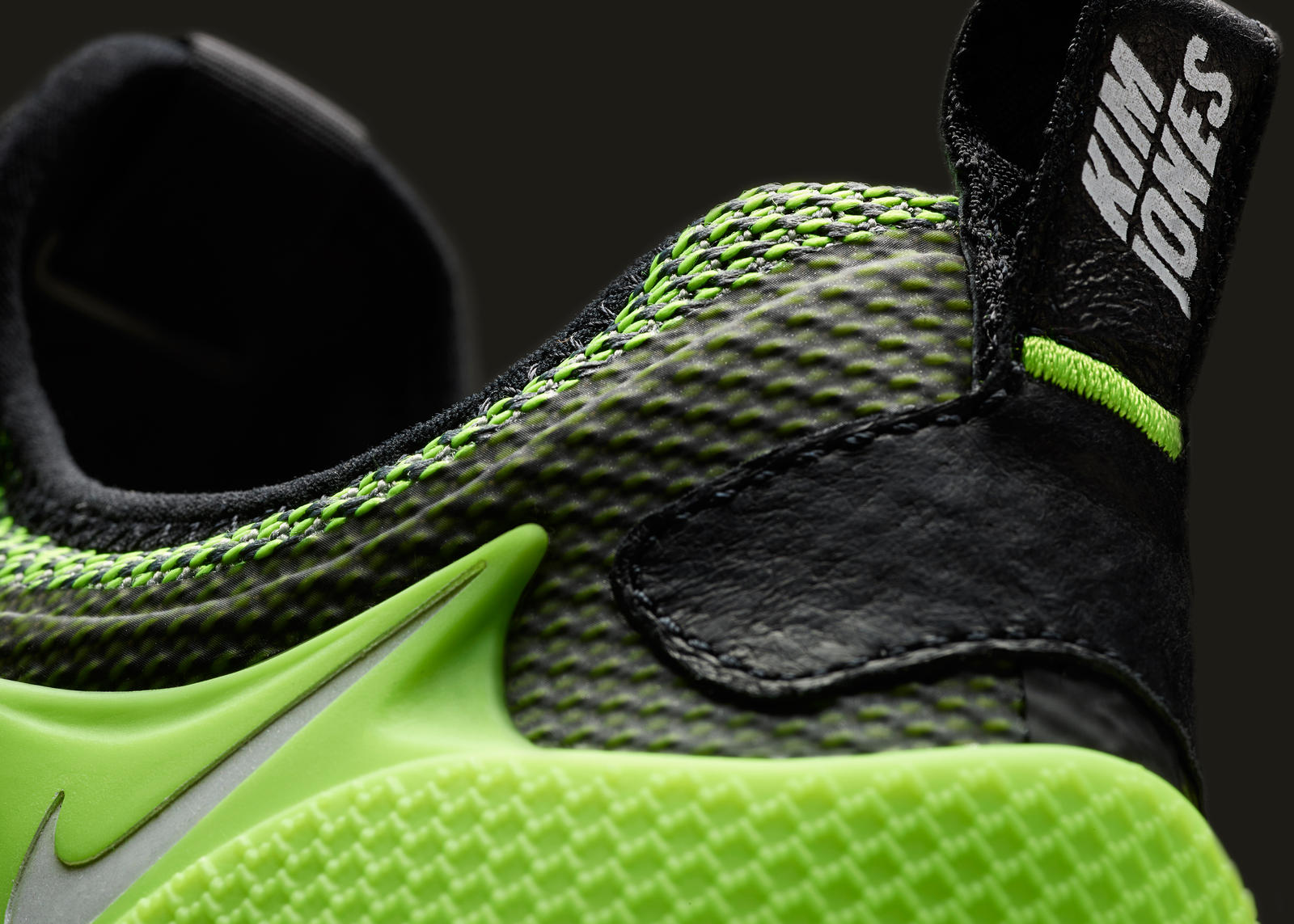 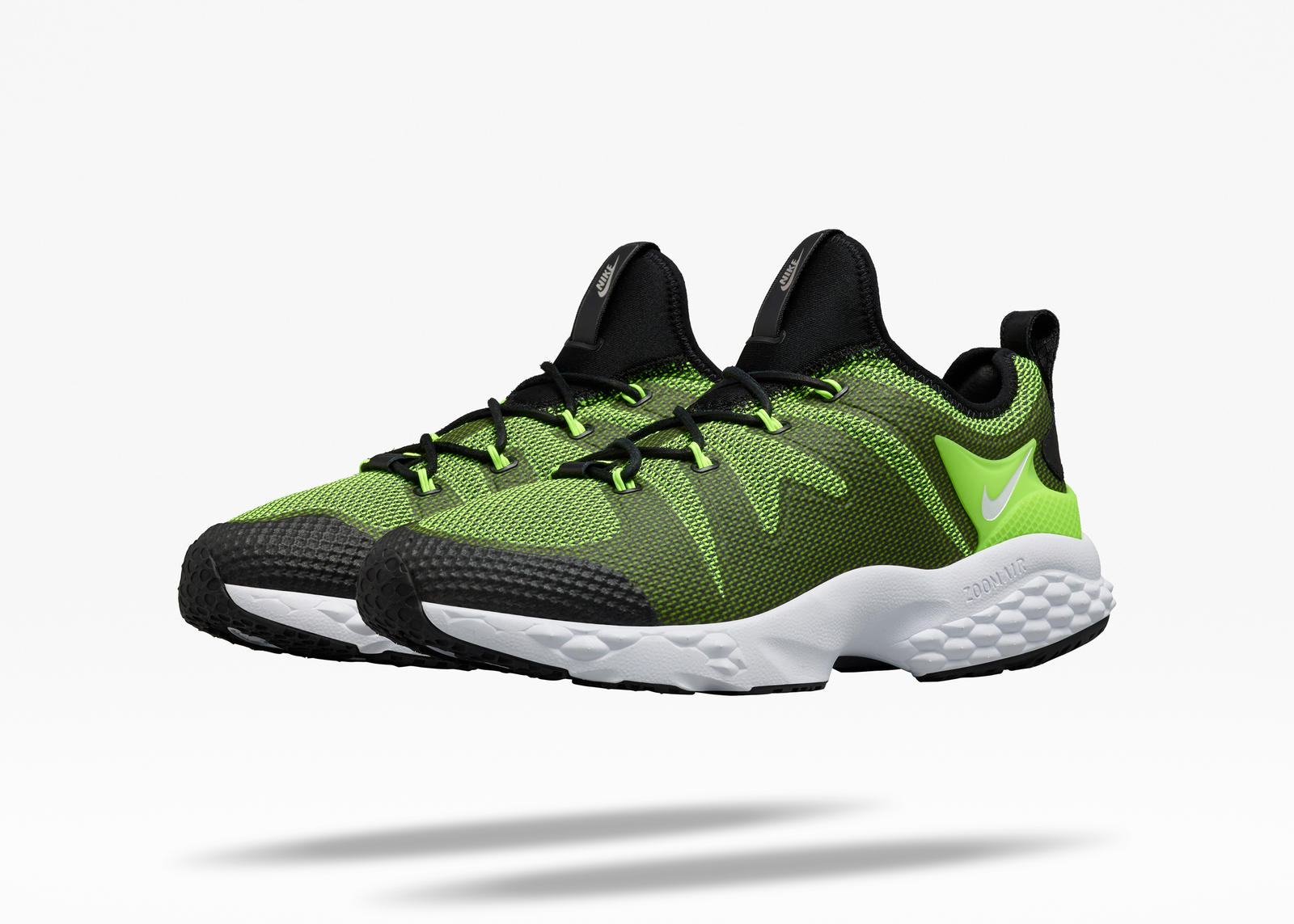 The shoe comes with a pair of shoe bags for easy packing. It will be available exclusively at NikeLab stores beginning July 23. 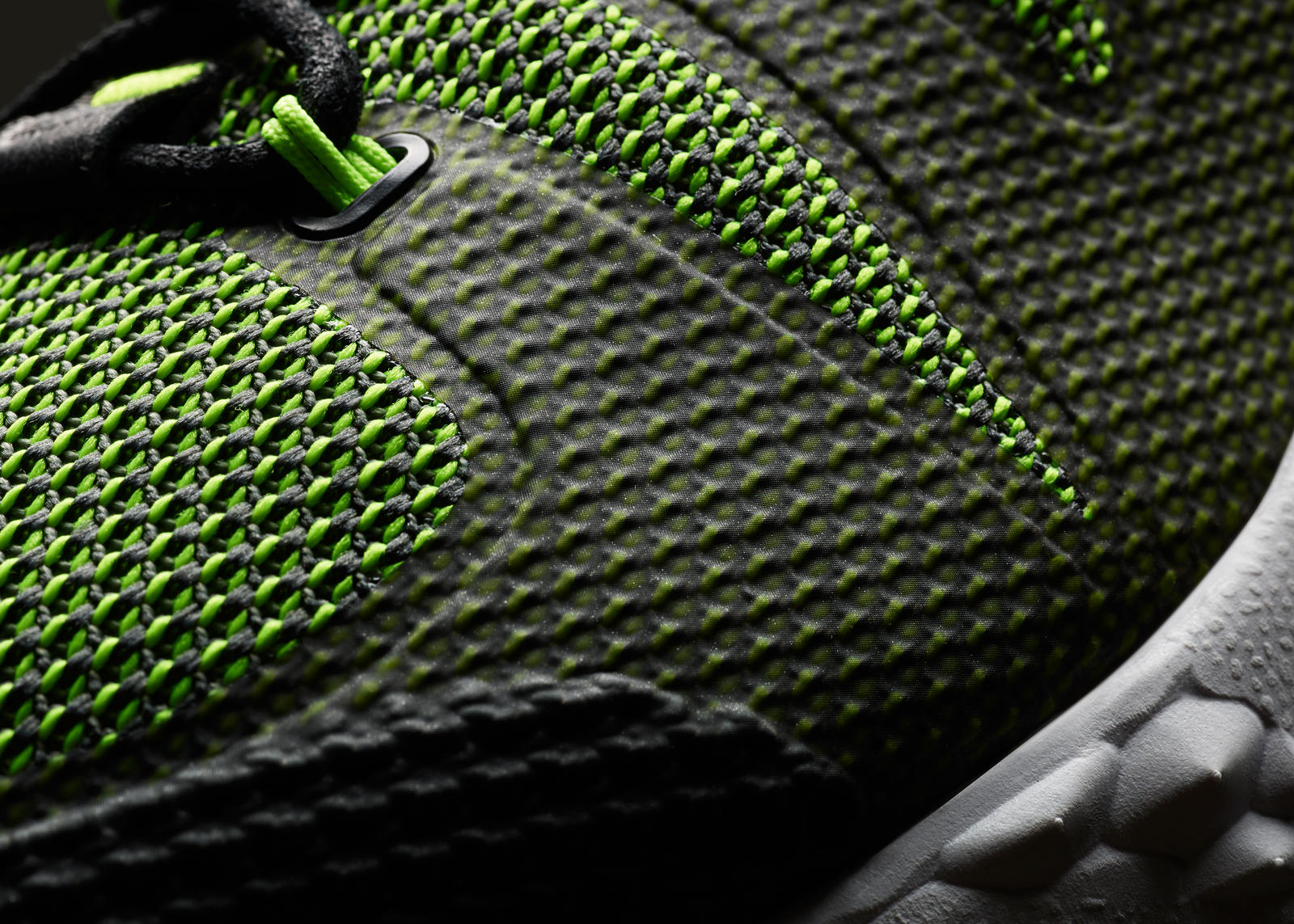 Its upper references the original design.

Are there any other sneakers from the Nike archives that you’d like to reimagine?
There are a few, actually… a Footscape would be interesting to work with, or just taking a few of my favorites and doing that mix-and-match and cut-and-paste to get to something new. So you are taking something that was at the forefront at its time, then bringing it back in a different way so it’s at the forefront of now, because the technology has changed so much and everything is so light and comfortable. People wear sneakers all the time now, so comfort and practicality are the key things. That thing of “time is luxury” is also important to think about. If products can make things easier for you and more simple, that’s important in life — as well as aesthetics, obviously.

That brings us back to the overarching theme of the collection “packables,” and your love of travel. Why is travel valuable to you?
I love to find new things, do new stuff, see new places… I want to see the whole world before I die. Nature is a big part of my interests. You have to go a long way to find things now, but if you don’t go there you don’t know what you’re going to see. It’s fine to look on the Internet or in a book, but I like to see, touch, look at things and be inspired by culture, wildlife, people... I’m quite sensory in that way. I do a bit of initial research on the Internet to see where I want to go, but you don’t know what you’re going to find on the corner when you get there. That’s the most exciting thing.

So what are the top five places you’ve visited?
Easter Island, Mongolia, tons of different countries in Africa — maybe Ethiopia, the Maldives, because it’s amazing. I love Siem Reap in Cambodia. I love India — Rajasthan, particularly… London, because it’s my hometown, tons of South America — the Galapagos Islands… Patagonia is amazing. Bhutan was really incredible.

To marry your love of travel with your interest in street culture and sportswear: Where do you see strong street fashion these days?
Tokyo for one, and I like LA at the moment. I like Sao Paolo. I haven’t been to Australia for a while, but the last time I went I thought it was really interesting and New Zealand, because there are a lot of homegrown designers who are experimenting with things. 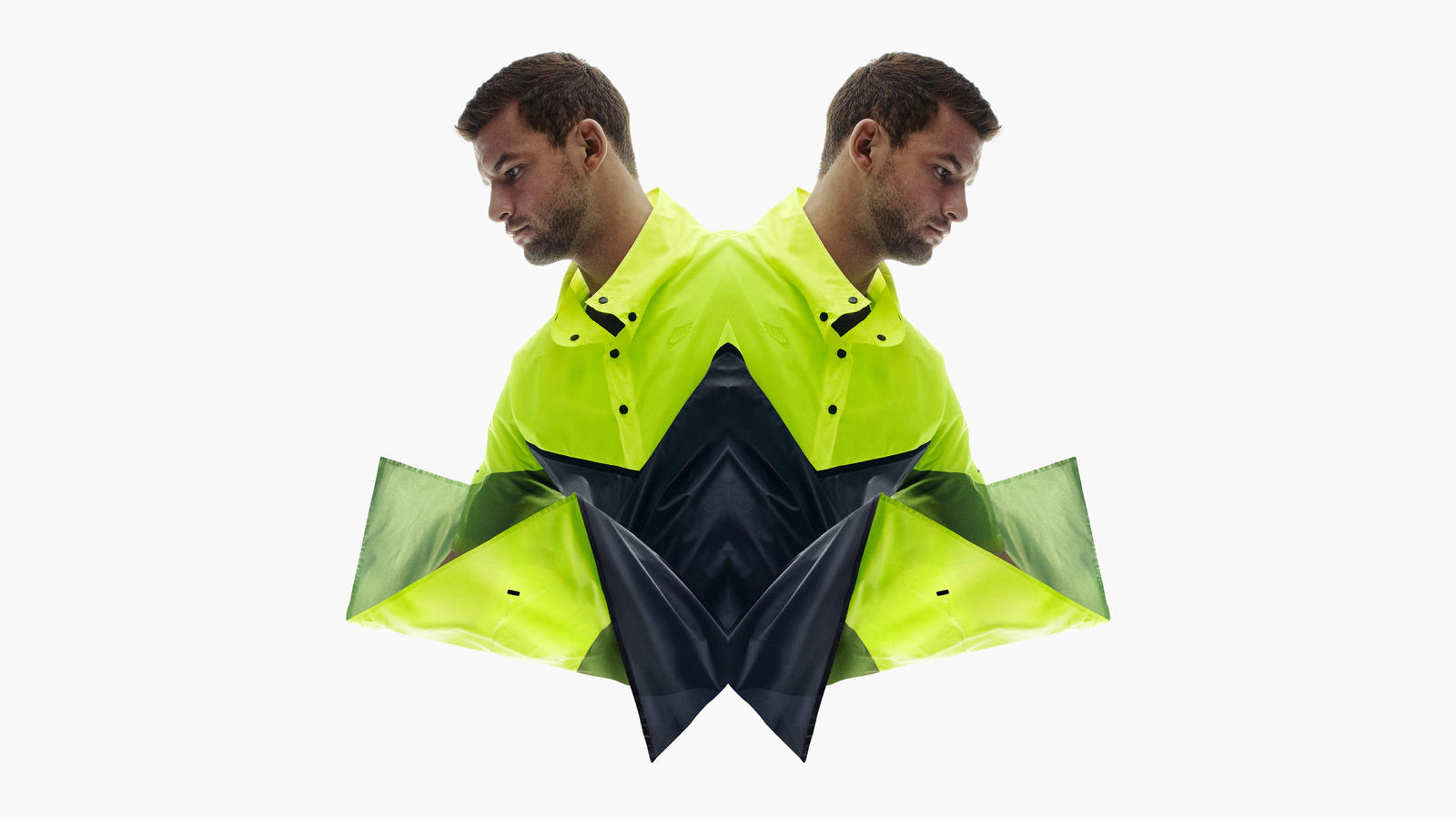