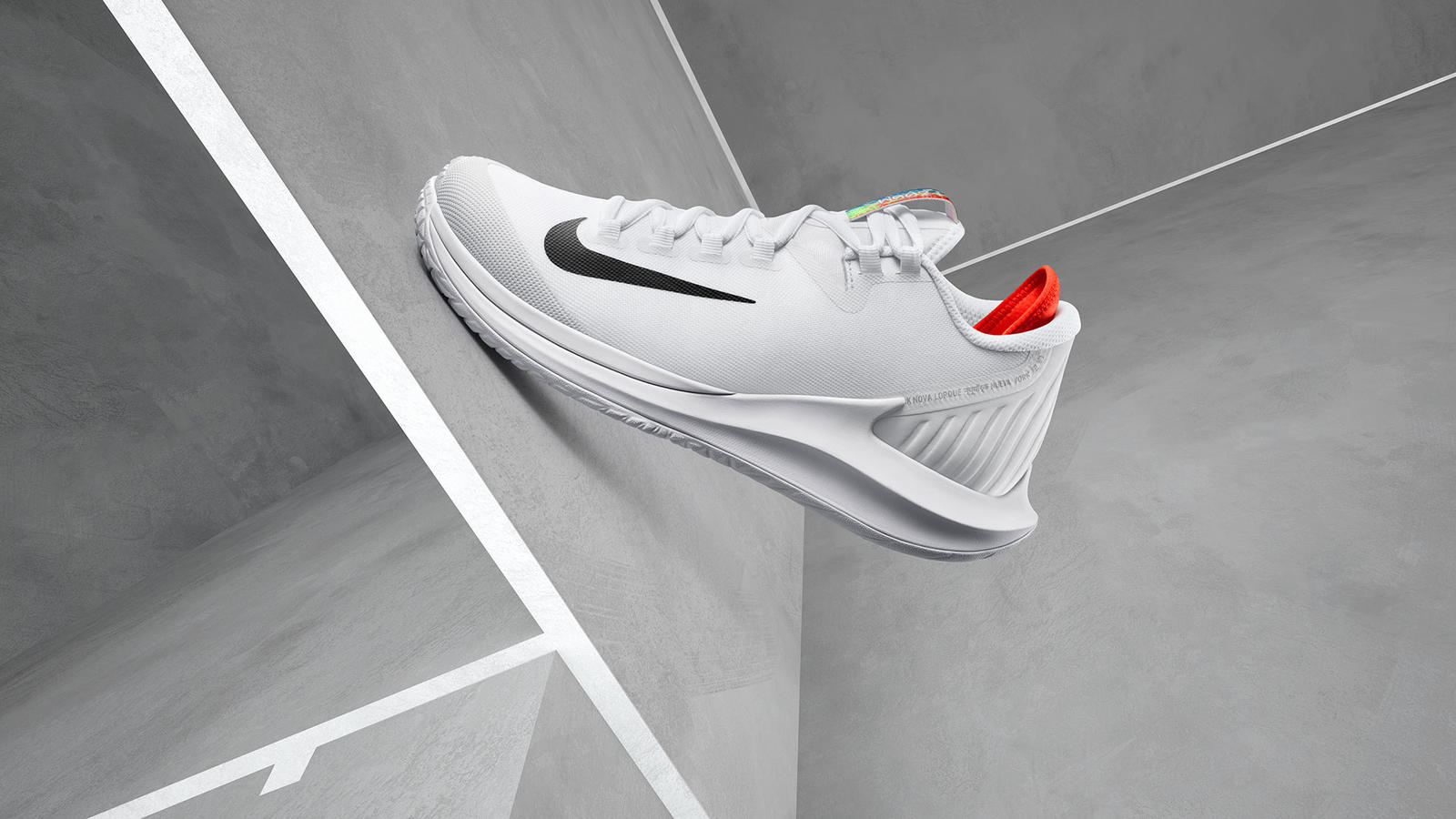 In honor of the host city for the year's final Grand Slam tournament, the white and black colorways of the NikeCourt Air Zoom Zero feature "New York" signed in different languages, from the midsole up through the heel. 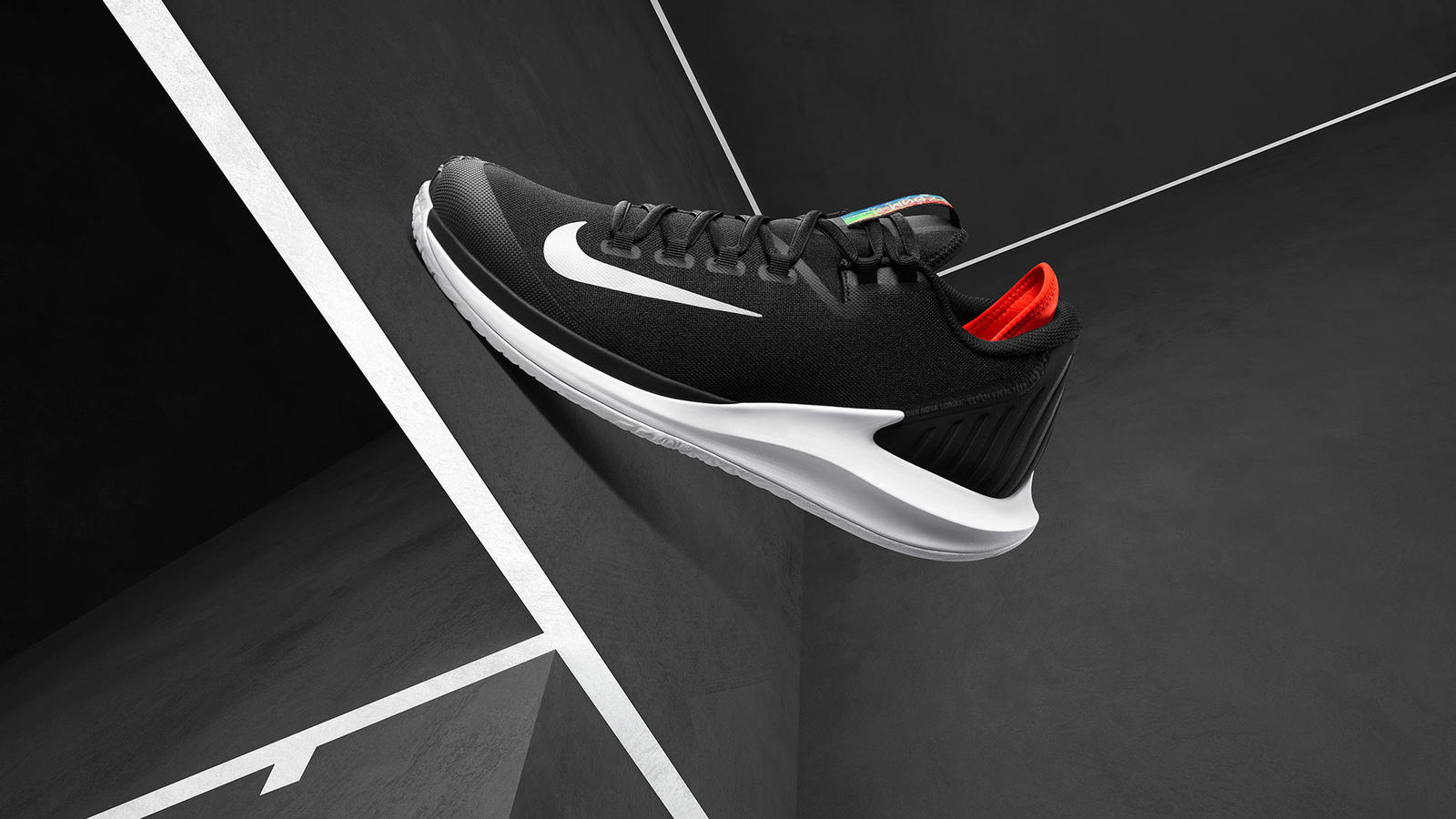 The internal bootie locks in the foot for the explosive movements that define the modern game.

Miami, March of 2017: NikeCourt’s design team is investigating the increasingly athletic evolution of tennis. They’ve considered how footwear can advance not only a fluid transfer from direction to direction (sprinting to spots on the court), but from movement to movement (the elevation of a punishing jump shot or the explosive lunge for the extra slide). With New York City's major tournament on the horizon, they were ready to test a solution in the form of the NikeCourt Air Zoom Zero.

What made the shoe’s debut so intriguing? It featured a full-length, curved Zoom Air bag — making it the first Nike tennis shoe to have full-length Zoom Air, and the first time that a bag had been articulated for tennis-specific movements.

Two days before the tournament in Miami began, Ukranian Elina Svitolina and American Frances Tiafoe were approached during their practice sessions by NikeCourt’s Design Team and asked to give feedback on the first versions of the shoe, which featured the first attempts at the curved bag. The two immediately picked up on the feeling of full transition under their foot. No clunk-clunk motion, just one smooth path from heel to toe. 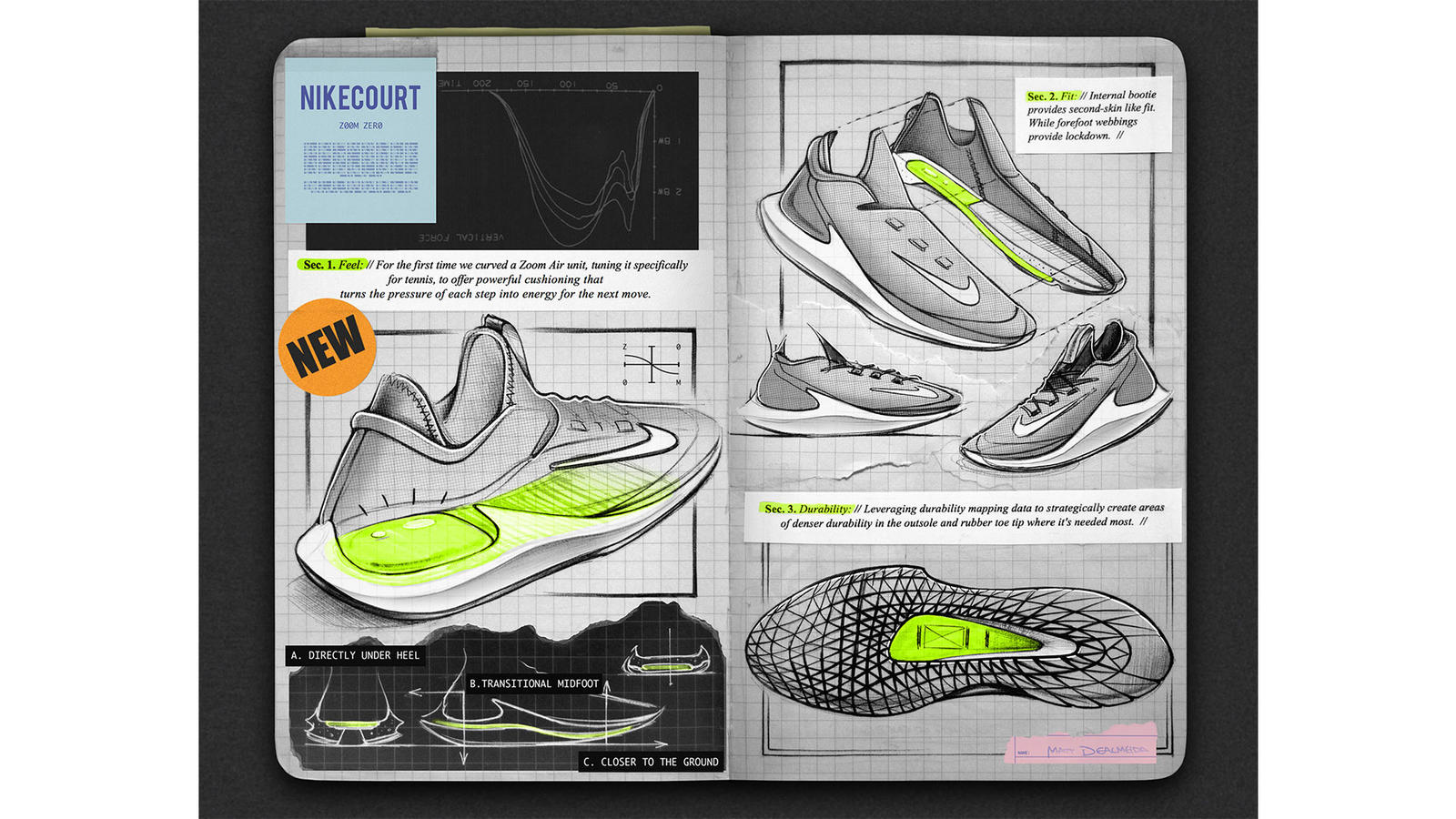 "For the Zoom Zero, we were incredibly focused on court feel," says footwear designer Matthew DeAlmeida. "We saw a lot of success from the innovations behind Breaking2. We asked ourselves, what can we provide that's specific to tennis? What's a Zoom Bag arrangement that will give tennis players the best court feel, every match?" Illustration by Matthew DeAlmeida.

Transition is always a key word when talking about the Zoom bag – specifically, how the bag facilitates the transition from heel strike to the spring of the forefoot. Those two movements inspired much of the Zoom Zero's bottom.

Correct curvature of the Zoom bag was key to link the roll of a full step. For the NikeCourt Air Zoom Zero, the Zoom bag is curved for impact protection on the heel strike and for a springy, forefoot bounce when players are on their toes. The benefits of top-loaded Zoom (when the Air bag is inserted on top of the midsole, closest to the foot) and bottom-loaded Zoom (when the Air bag is inserted in the bottom of the midsole, closest to the ground) are well-known throughout the Nike line. But was it possible for a tennis shoe to have the best of both worlds without using separate bags? An unconventional bag provided the answer – curving the bag so it sits against the heel and the outsole.

Before the team even opened molds, brainstorming on the curved bag began with meticulous sketches and reviews. The Air bag had to be precisely positioned for the transition that players were looking for. But they also wanted to show the curve of the bag, which they accomplished with a large cutout on the outsole.

The durability of the curved bag was important in order to protect the athlete’s foot during pivotal moments of a match — repetition of the sport's explosive moments wears a shoe’s outsole away. The priority was set for its high-impact areas, like the medial tip of the forefoot, which often endured the brunt of heavy slides along the baseline and instant changes of direction at the net.

The capabilities of the shoe are wrapped in a design that, at first look, belongs on the New York City runway. This is a tennis shoe? It was a question asked by many of the players who initially tested the Zoom Zero. It was also a reaction that the design team was going for. With the Zoom Zero, a tennis shoe could, at the same time, make an aesthetic statement and pave a new functional ability on the court. 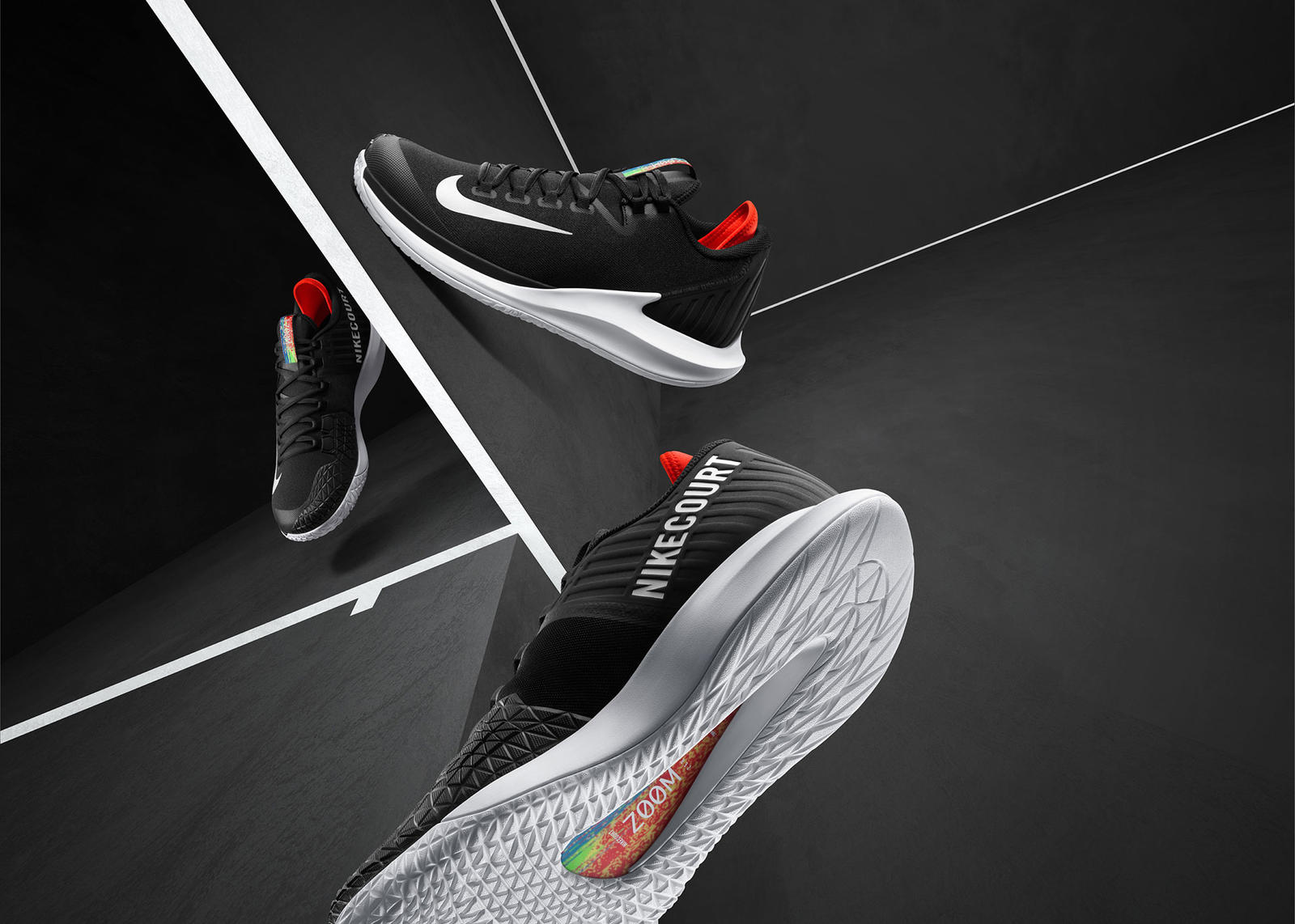 The angled cutout on the outsole features a glitchy, molten graphic of the national flags of NikeCourt athletes. The graphic is also a nod to the cultural melting pot that is New York City.

As the game of tennis looks toward the future, the Air Zoom Zero will transition right with it; Svitolina and Tiafoe have already won tournaments in the shoe this year. The intention behind the Zoom Zero was to make it more than a slow iteration of just another shoe. Calling the shoe Zoom Zero was the team's way of calling out what it wanted with the curved bag: starting from zero, and then putting everything in a tennis shoe that needs to be there, and nothing else.

The NikeCourt Air Zoom Zero will release in three colorways for men and women on July 19, available on nike.com and select retailers.