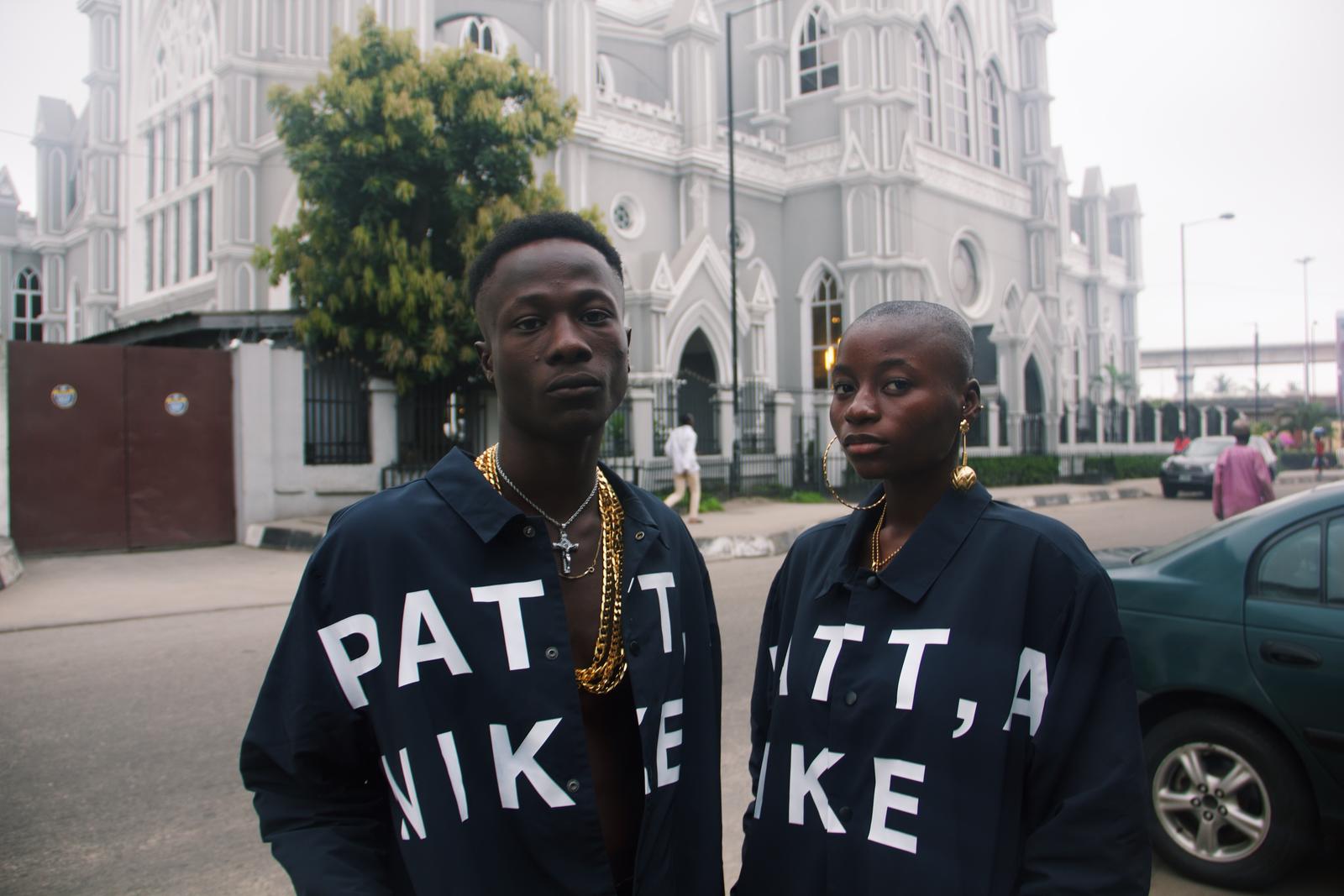 One feature in the new Patta collaboration with Nike: oversized, eye-catching font. Photo by Stephen Tayo.

The bold typography on one element of Patta’s latest collaboration with Nike, a dark obsidian jacket, is reminiscent of the signage at Amsterdam’s Schiphol airport. The font is one of many sources mined for the collection, which is a study in interconnected and seemingly disparate references that make up the "Publicity. Publicity. Wohooooow!" collection.

“Traveling. Visiting each other. Getting to know each other. For us, that is where the collaboration between Nike and Patta started,” explains Patta’s Vincent Van de Waal. 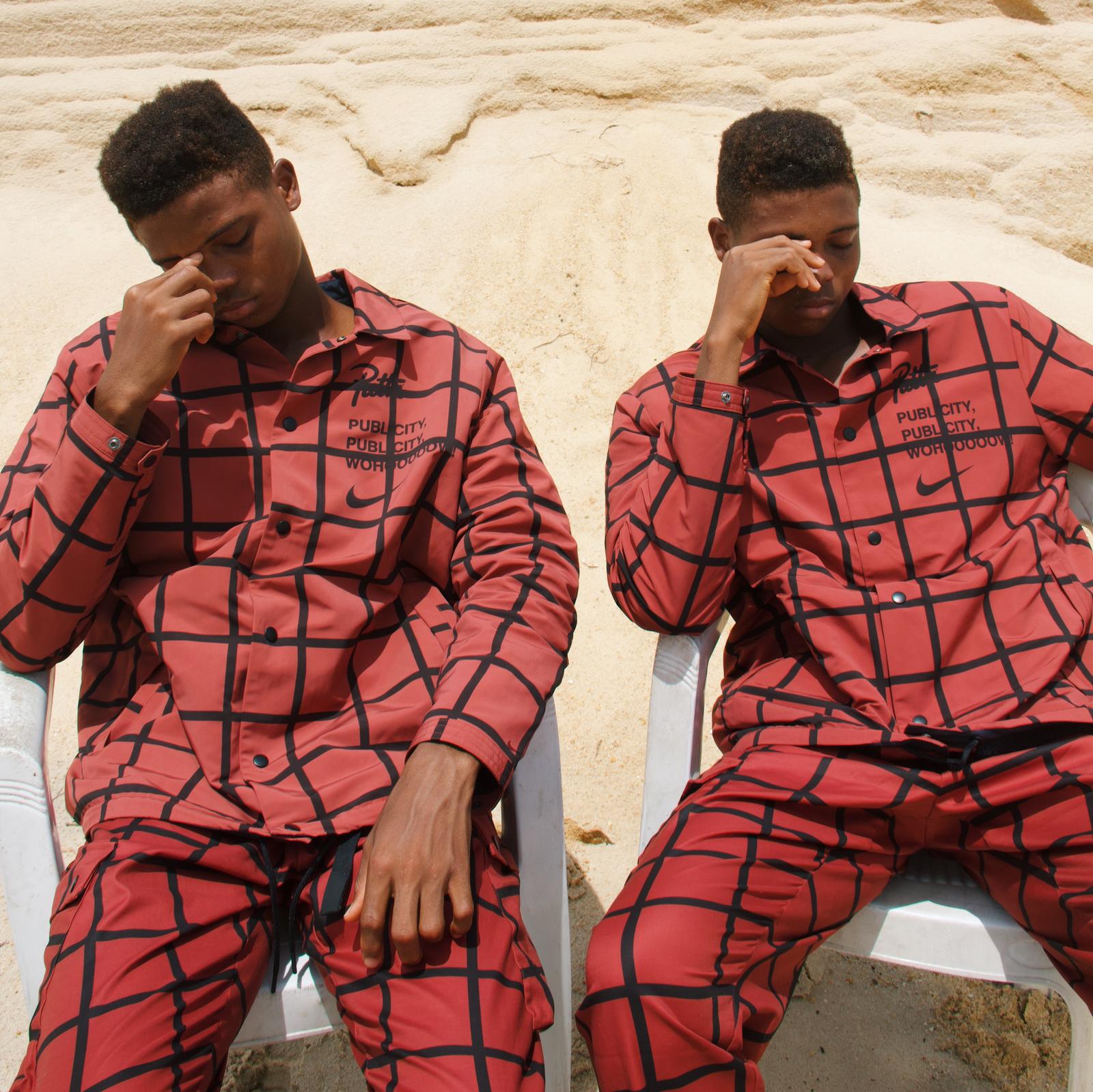 “We wanted to make head-to-toe outerwear, but have it somehow feel like a tracksuit, so we adjusted existing Nike silhouettes to make it our own,” says Patta's Vincent Van de Waal. Photo by Stephen Tayo. 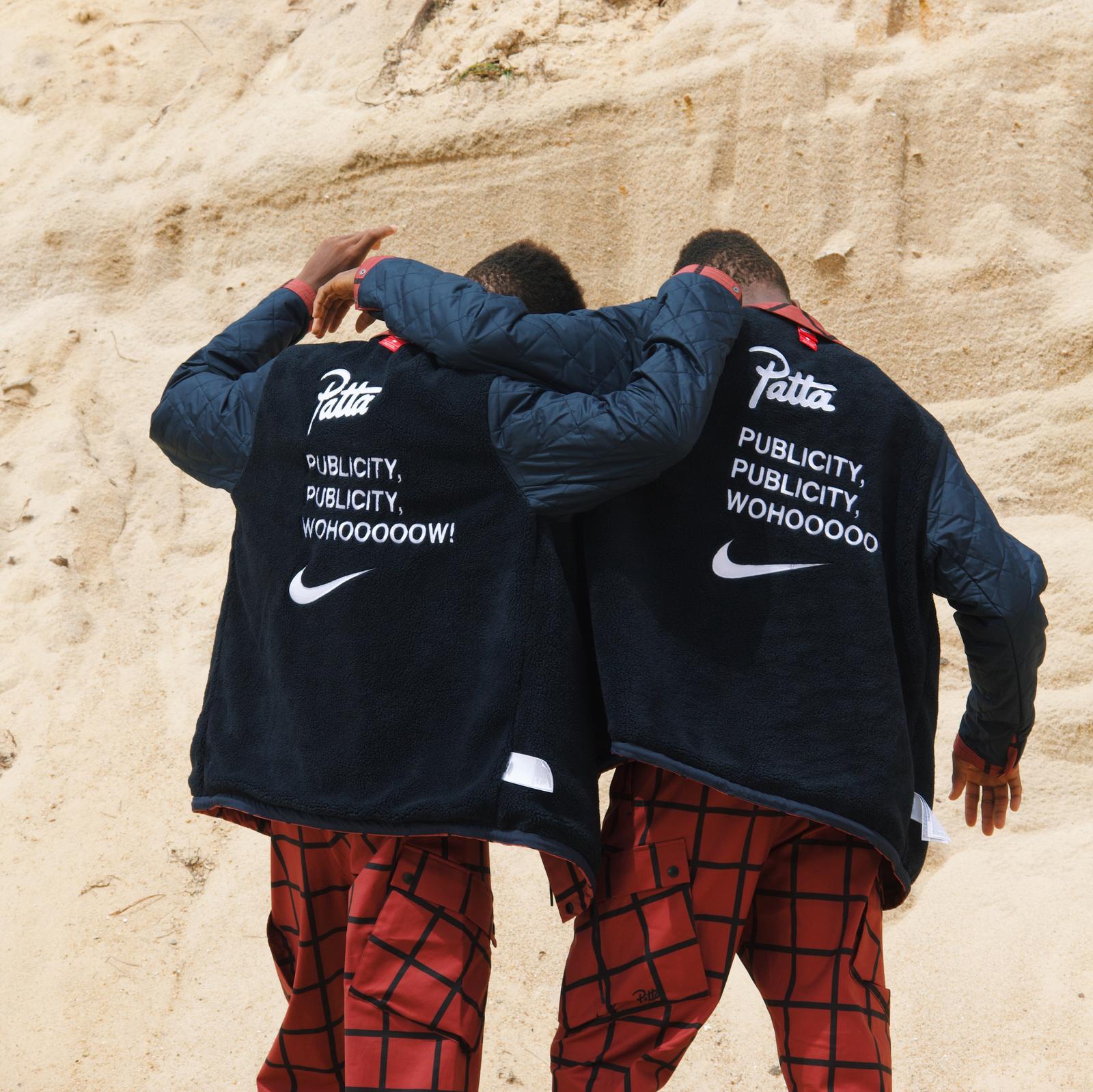 The inside of the checkered jacket is quilted and fleece-lined, and features the collaboration's namesake: "Publicity. Publicity. Wohooooow!" Photo by Stephen Tayo. 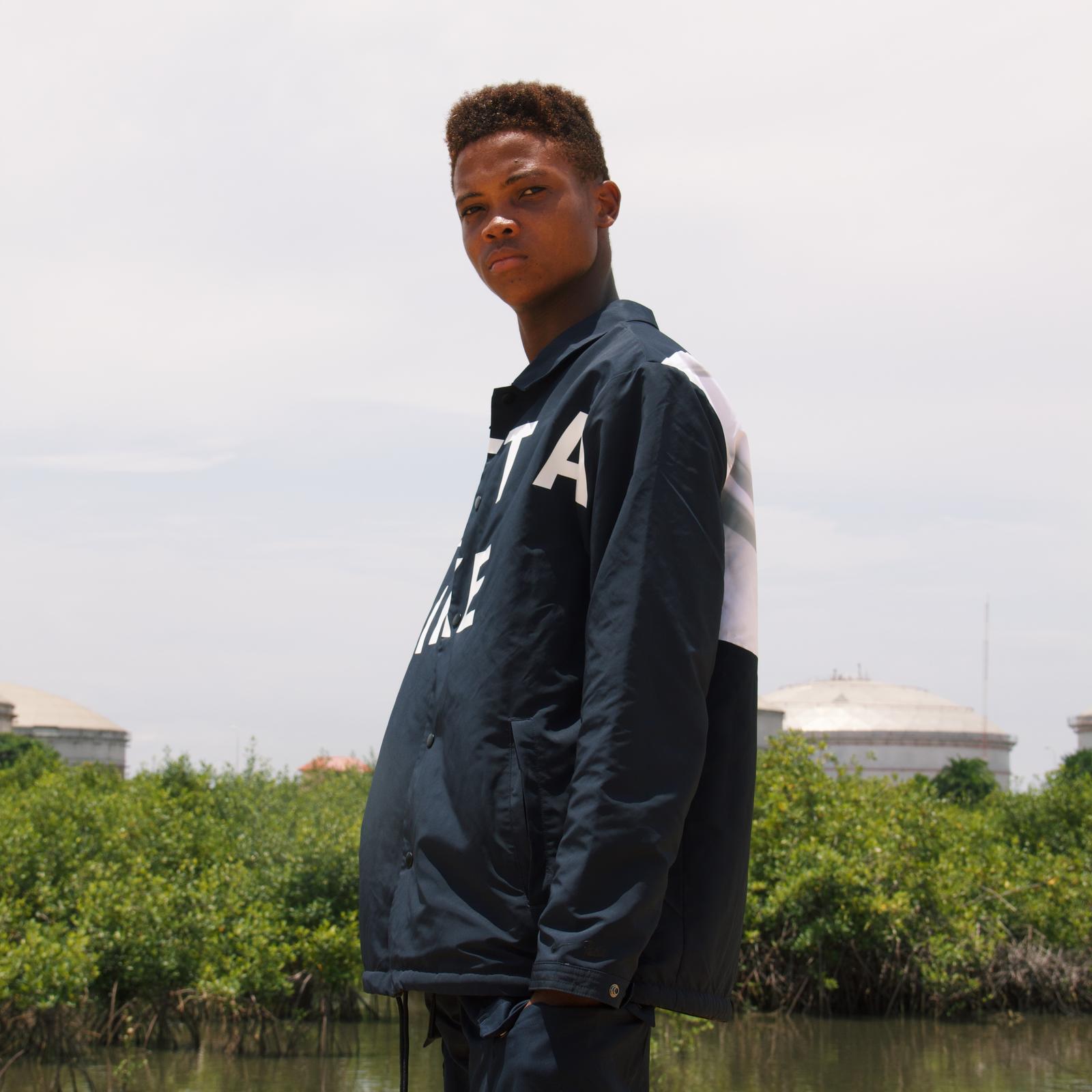 On the back of the dark obsidian jacket is a large white flag, which Van de Waal says is "an invitation to project messages on, to color, to write on and to vandalize.” Photo by Stephen Tayo.

The phrase, "Publicity. Publicity. Wohooooow!,” stems from another sort of collaboration — the spontaneous “happenings” of 1960s avant garde artists, like Amsterdam’s Robert Jasper Grootveld. For the Patta crew, these engagements remind of a need not just for self-awareness and irony, but as Van de Waal notes, about how branded items become an act in space as well.

Thus, a requisite boldness holds key position in the collection. Apparel was chosen as a way to mix technical elements with classics. “We wanted to make head-to-toe outerwear, but have it somehow feel like a tracksuit, so we adjusted existing Nike silhouettes to make it our own,” says Van de Waal.

It's running sportswear, but not. Technical, but casual. Most important, it's an exercise in expressing and blending the performative elements of sport with those of style.

Evidence of this thought comes through in the checkered suit, which is, in fact, an homage to a pioneering jazz musician who asked following his final Paris concert not “How did I play?” but “How did I look?”

While the reference there is overt, on the other suit — the dark obsidian with bold typography — the inspiration is open-ended. The back features a large white flag, which Van de Waal explains: “The white flag bearer is historically the one who seeks to negotiate. We associate the white flag with peace, seize fire and surrender: a positive symbol in an increasingly polarizing society and public space. The white flag is also an invitation to project messages on, to color, to write on and to vandalize.”

Fittingly, Patta broadens its collaboration with a more literal invitation, giving space to extended family to share their unique perspectives on the output as a series of campaigns that form “happenings” both physically and digitally. The work is collated in a book, created in collaboration with Linda van Deursen, featuring all 11 artists, including Bart Julius Peters, Dana Lixenberg, Oko Ebombo, Nigel Shafran, Qiu Yang, Joyce Ng, Morgan Knibbe, Vincent Van de Waal, Violette Esmeralda, Sam de Jong and Stephen Tayo. A short film by Morgan Knibbe can be viewed here.

A Gallery of the "Publicity, Publicity, Wohooooow!" Artists 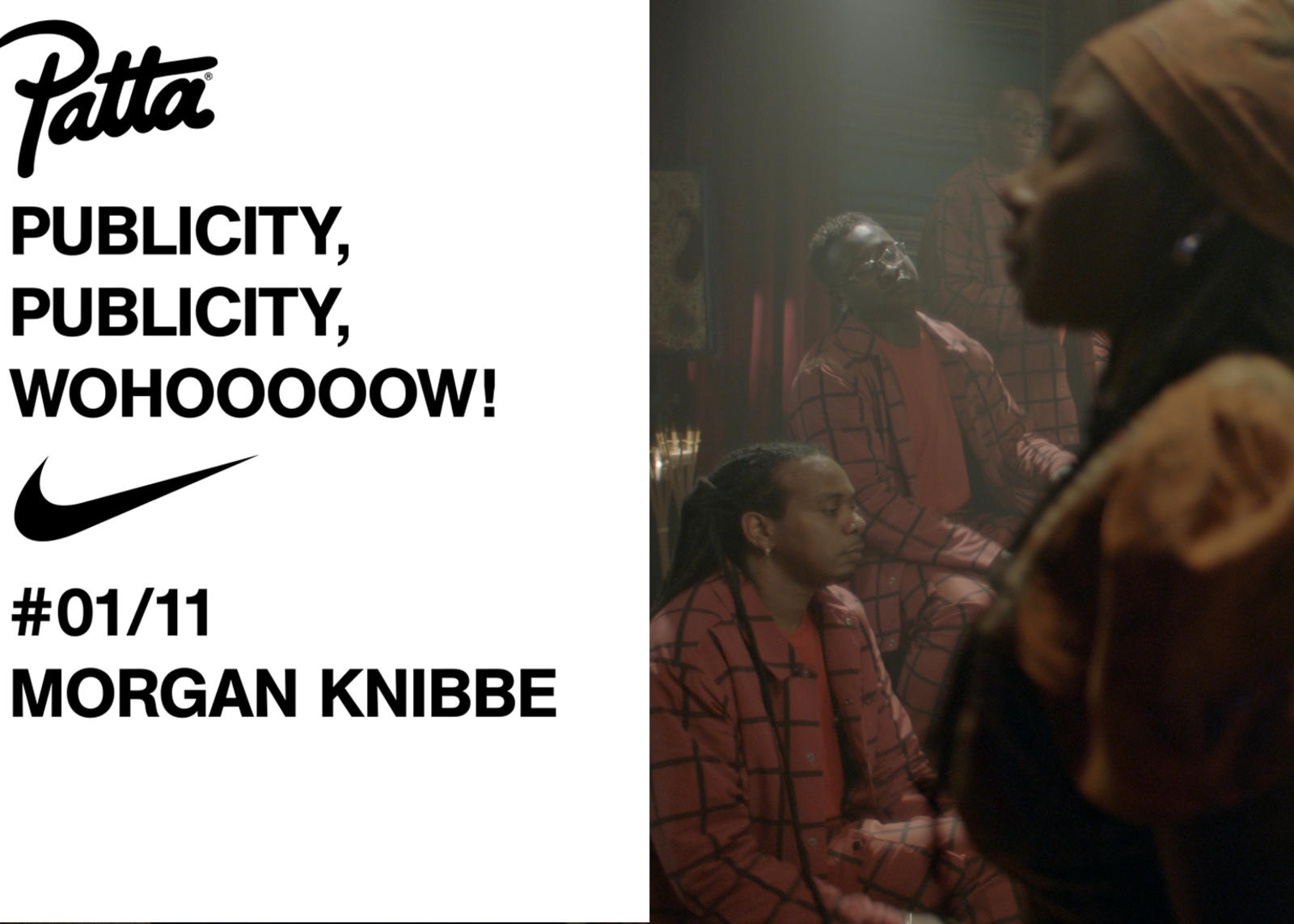 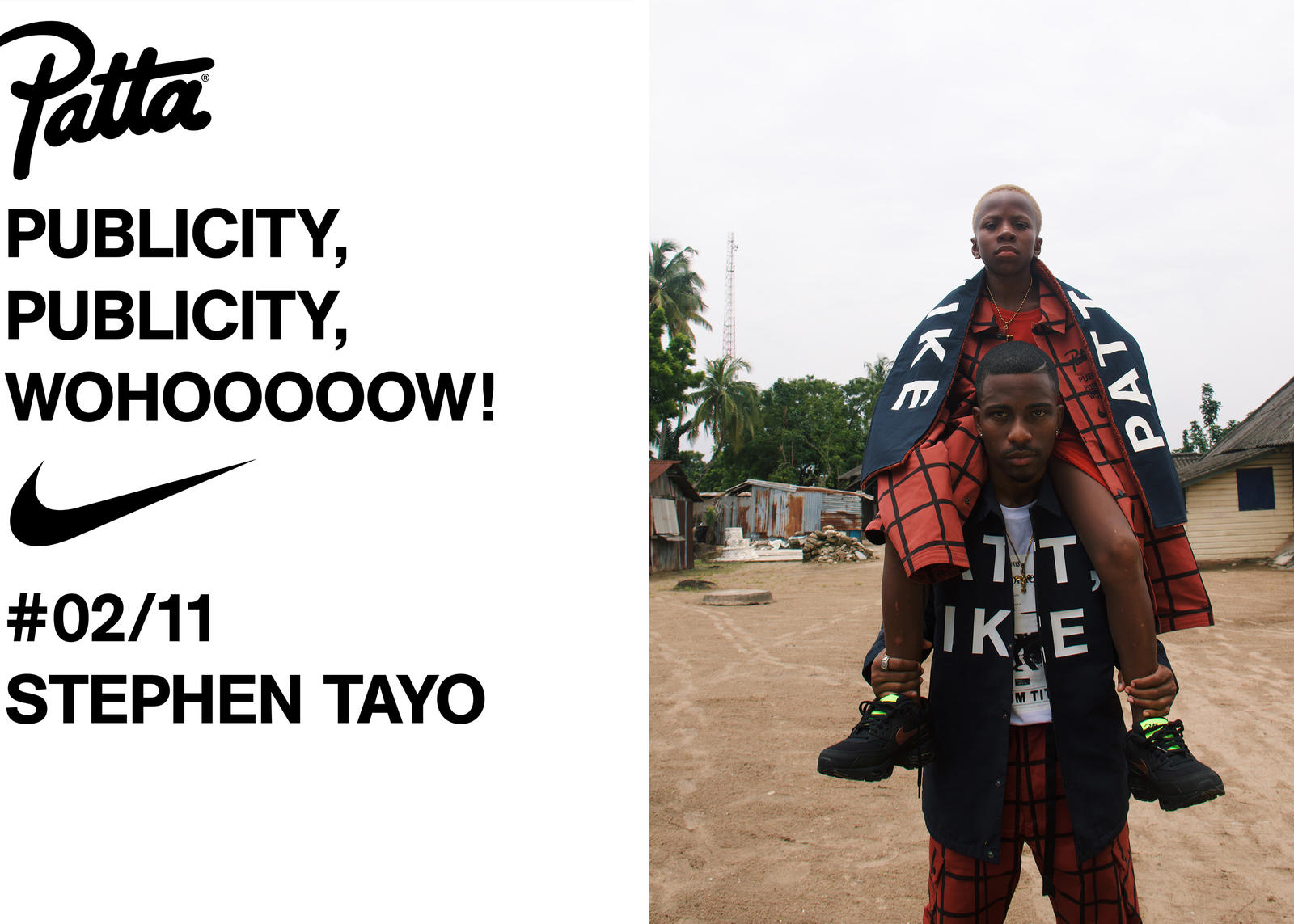 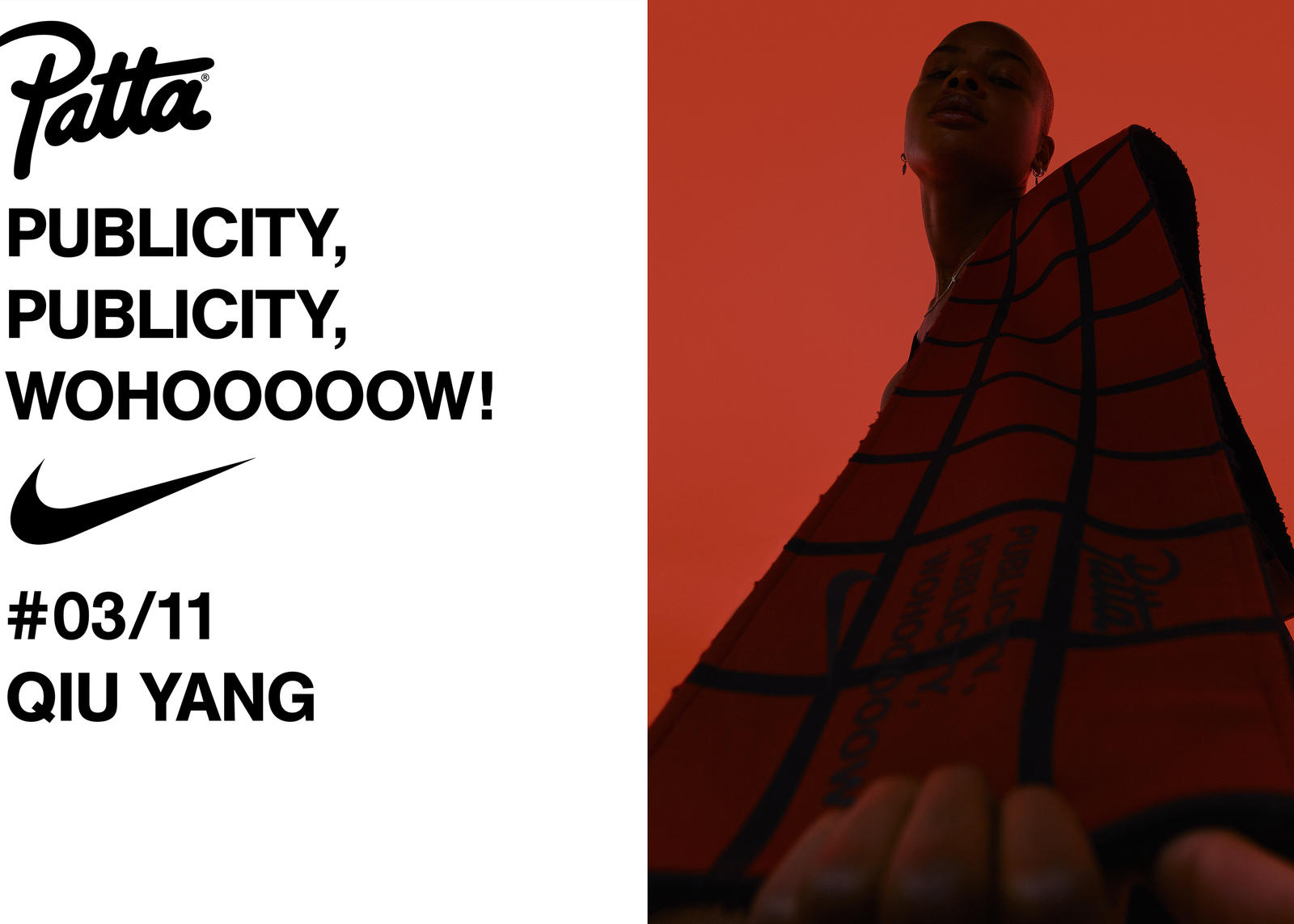 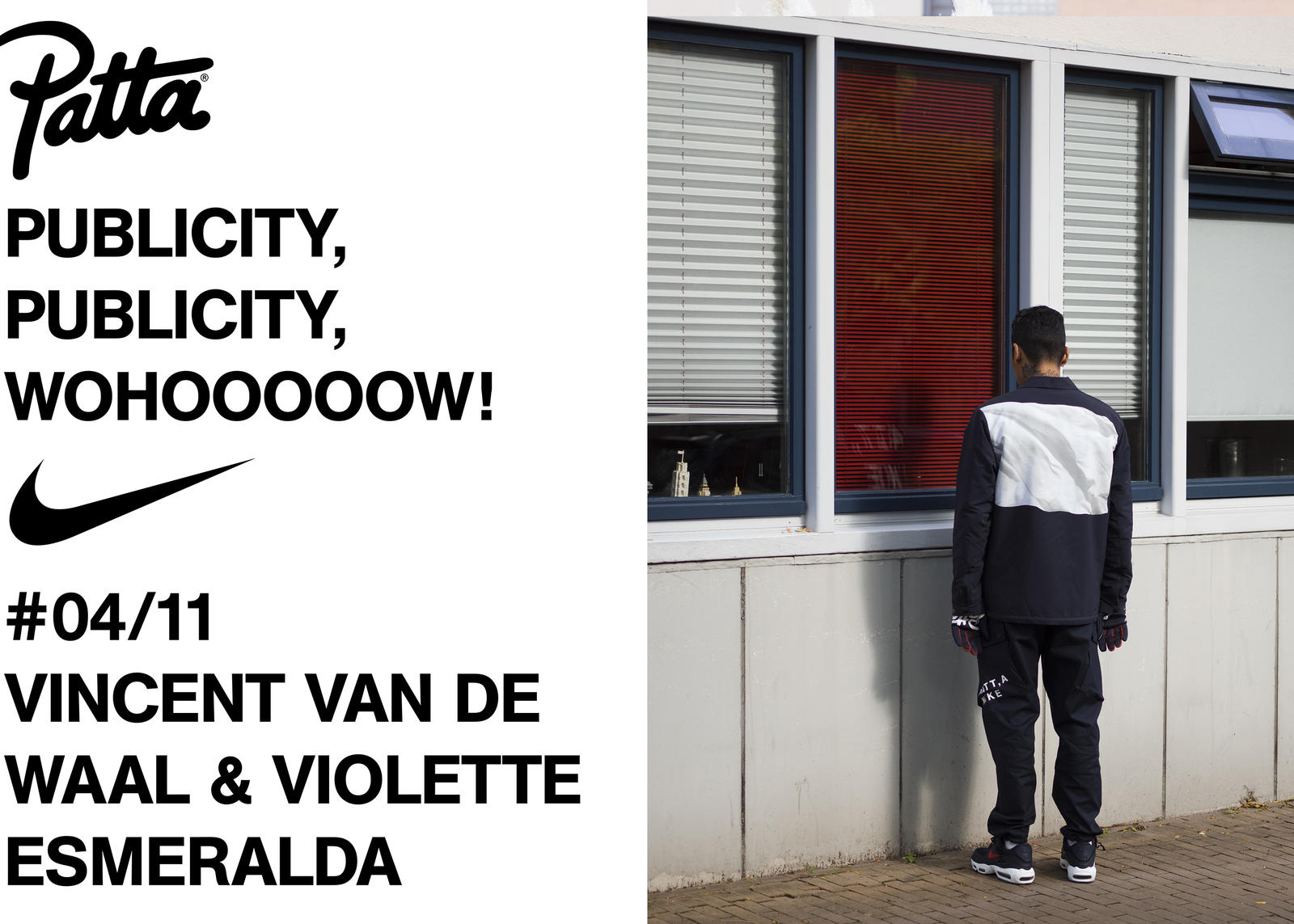 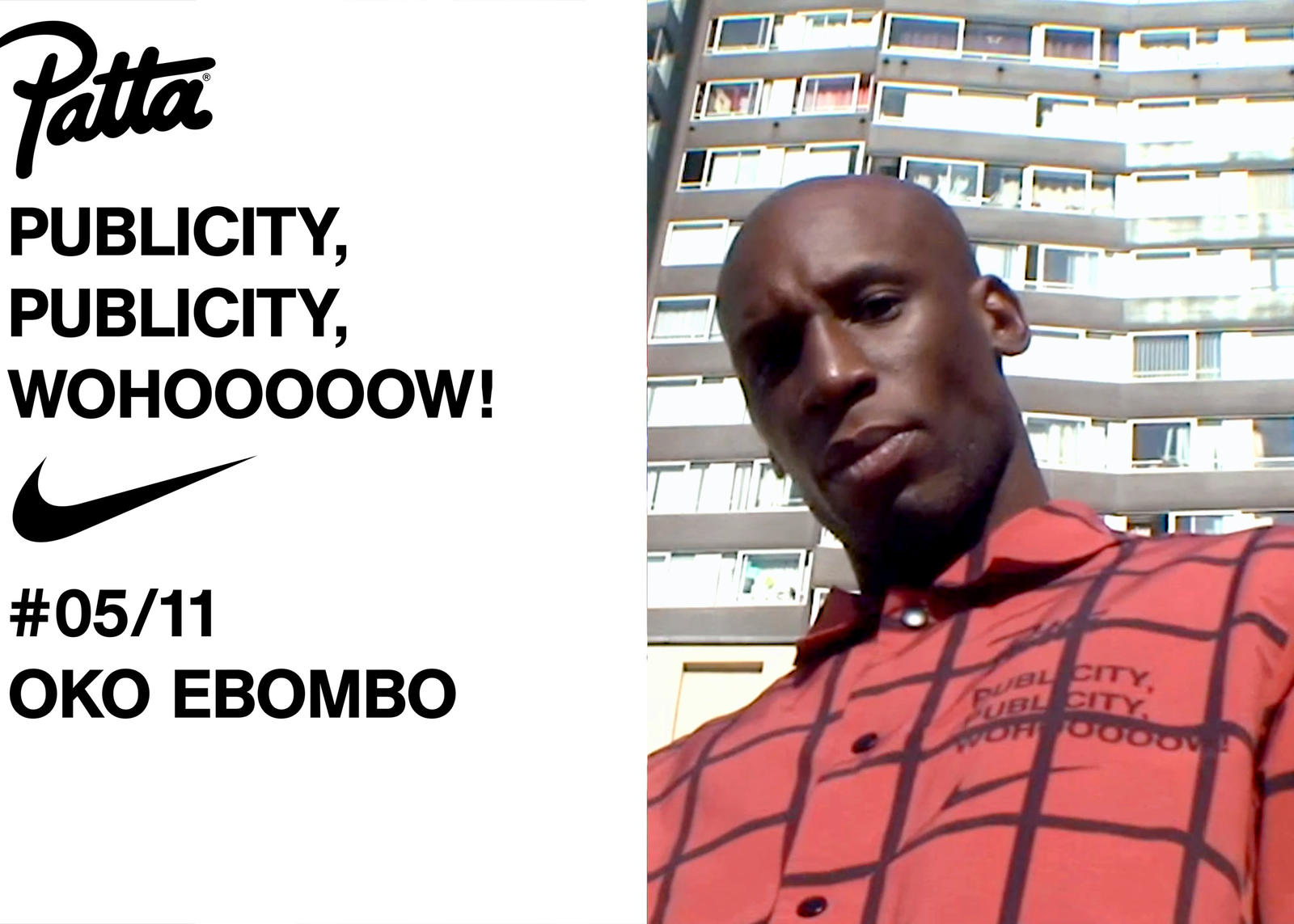 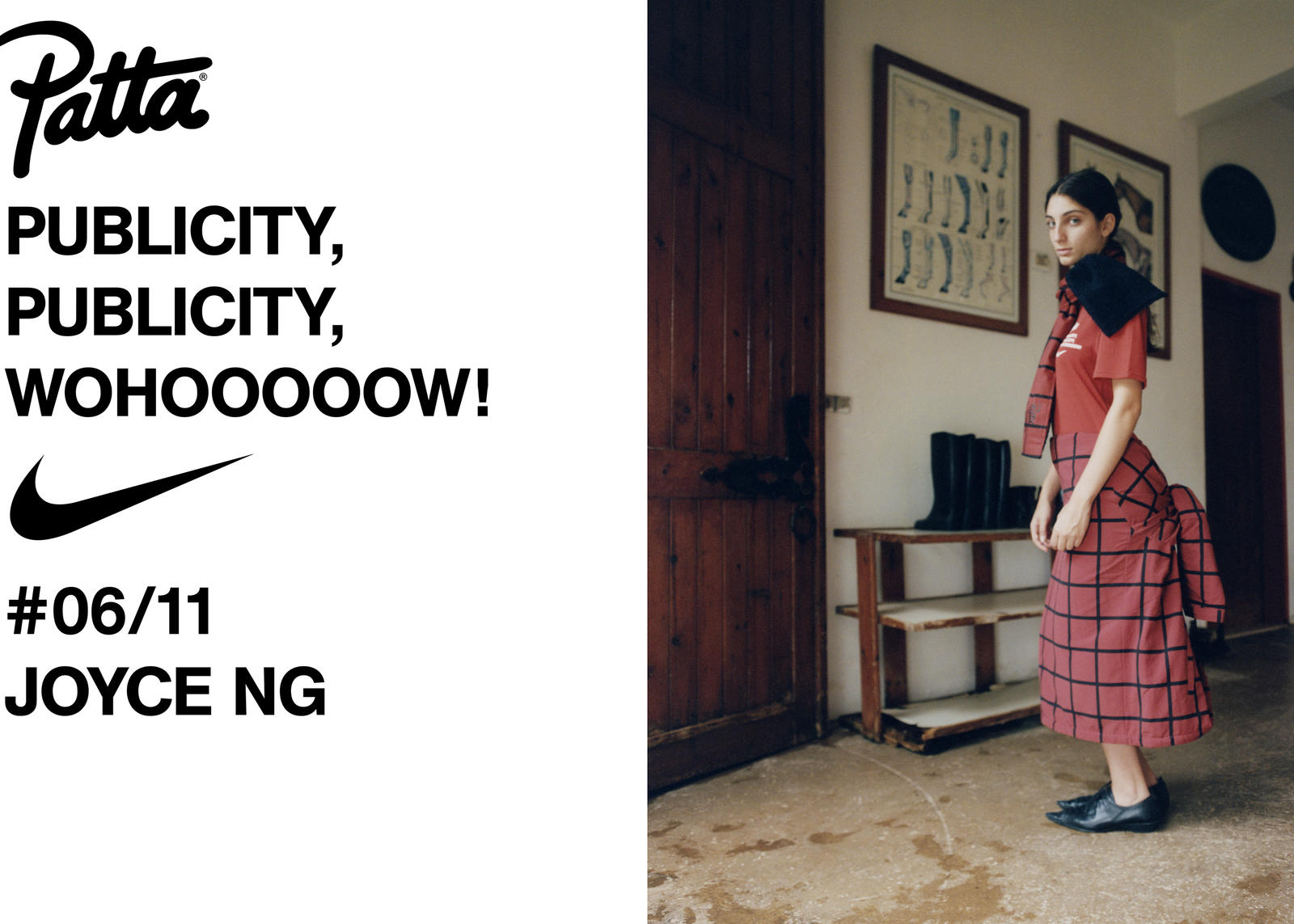 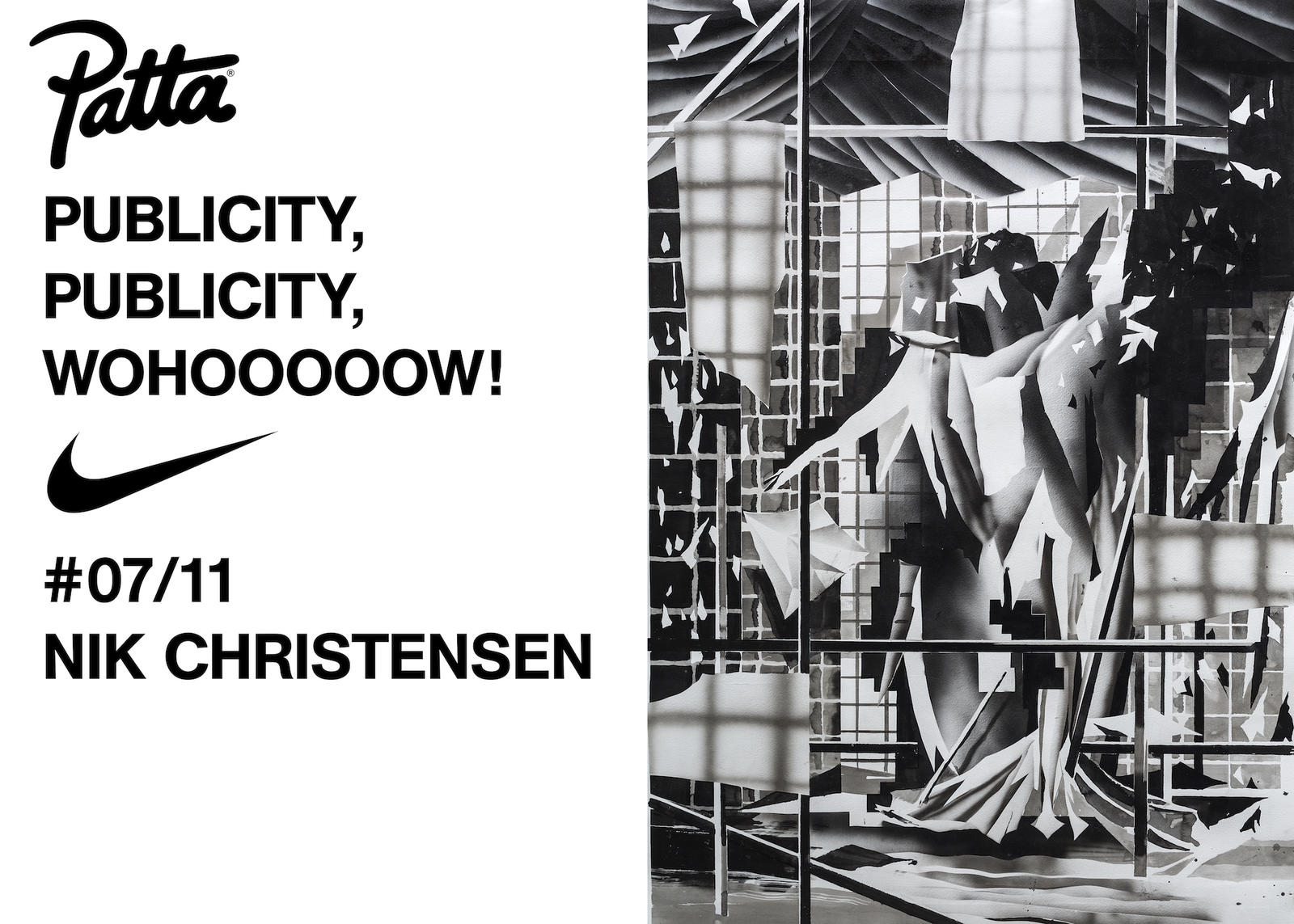 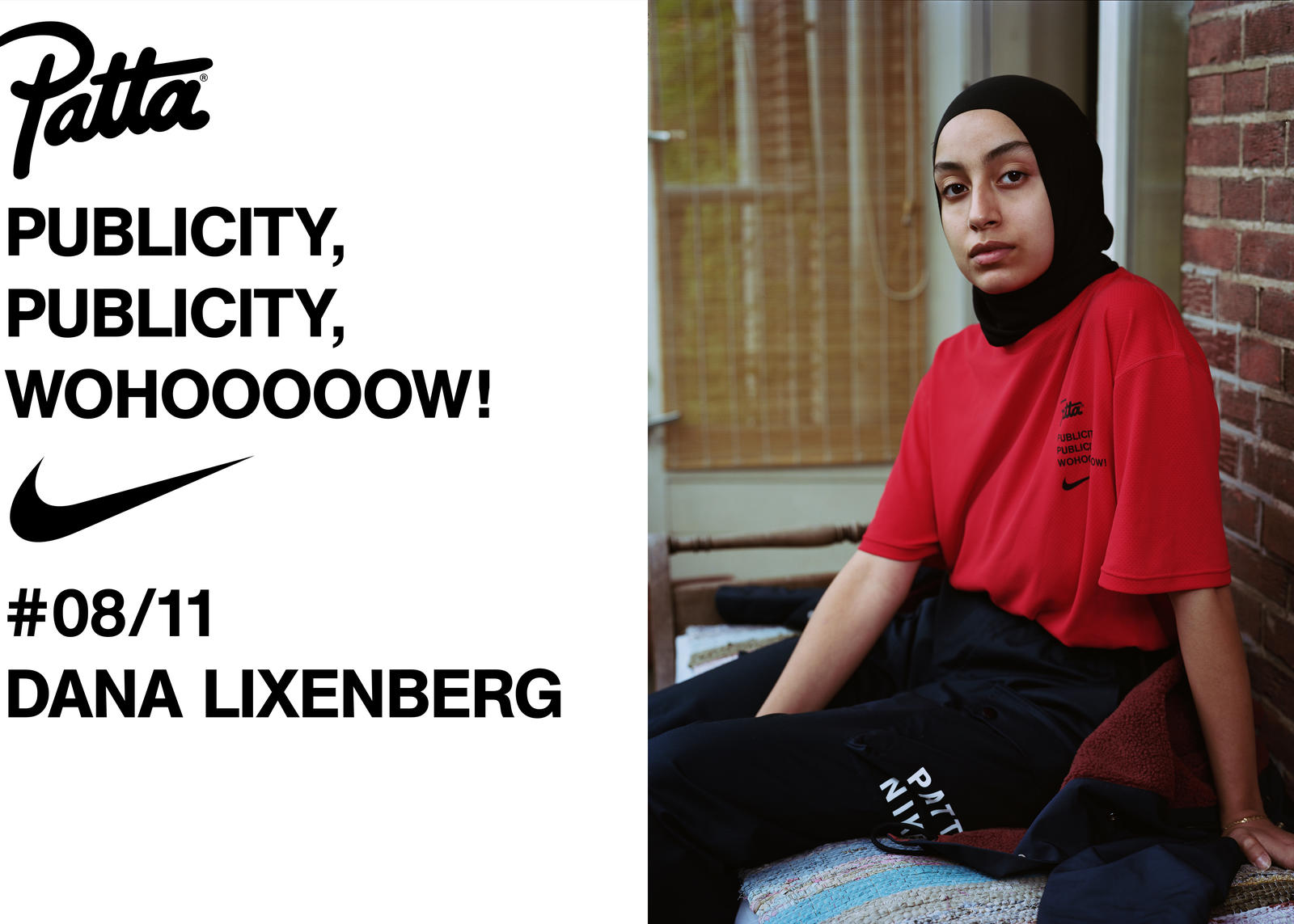 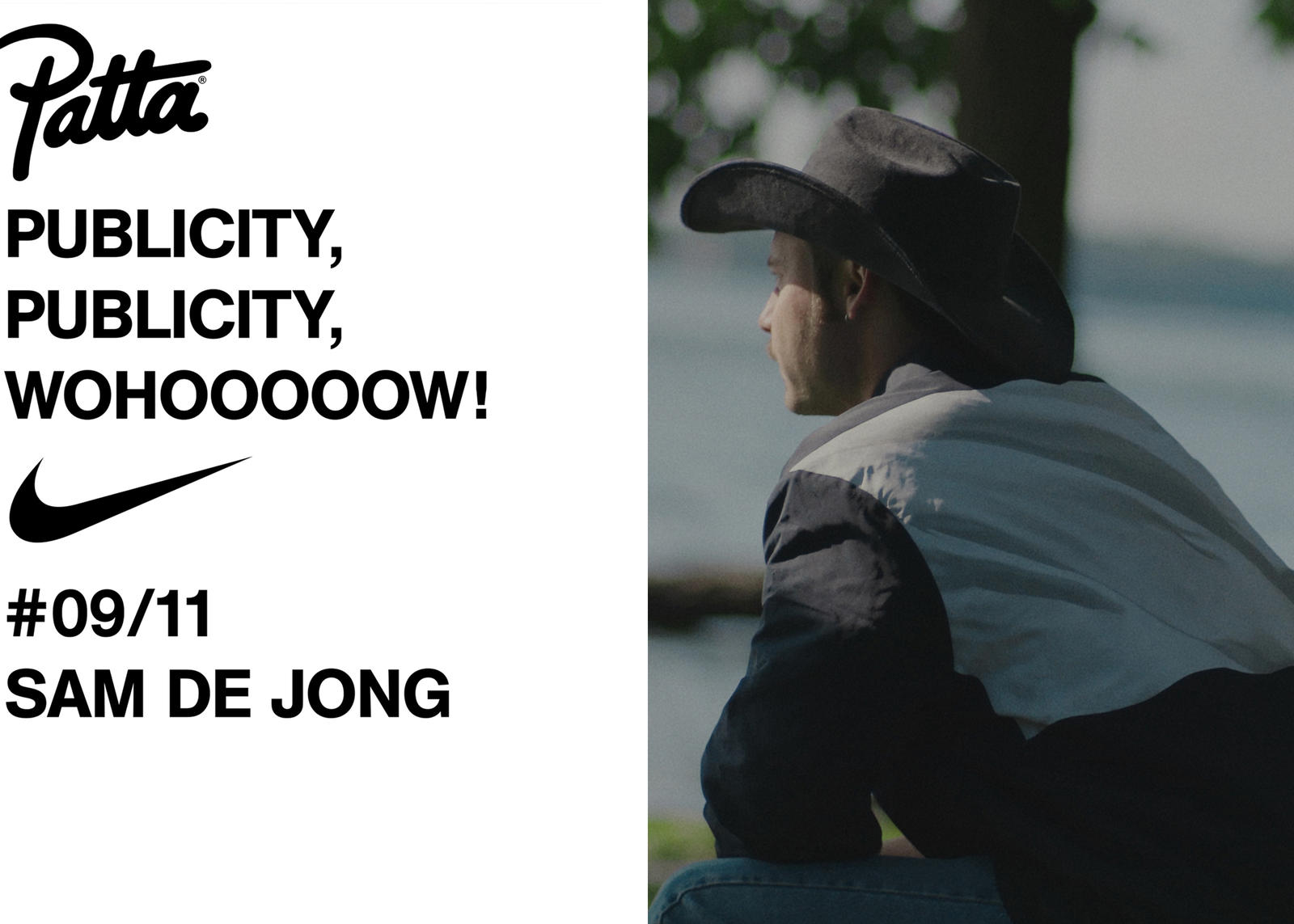 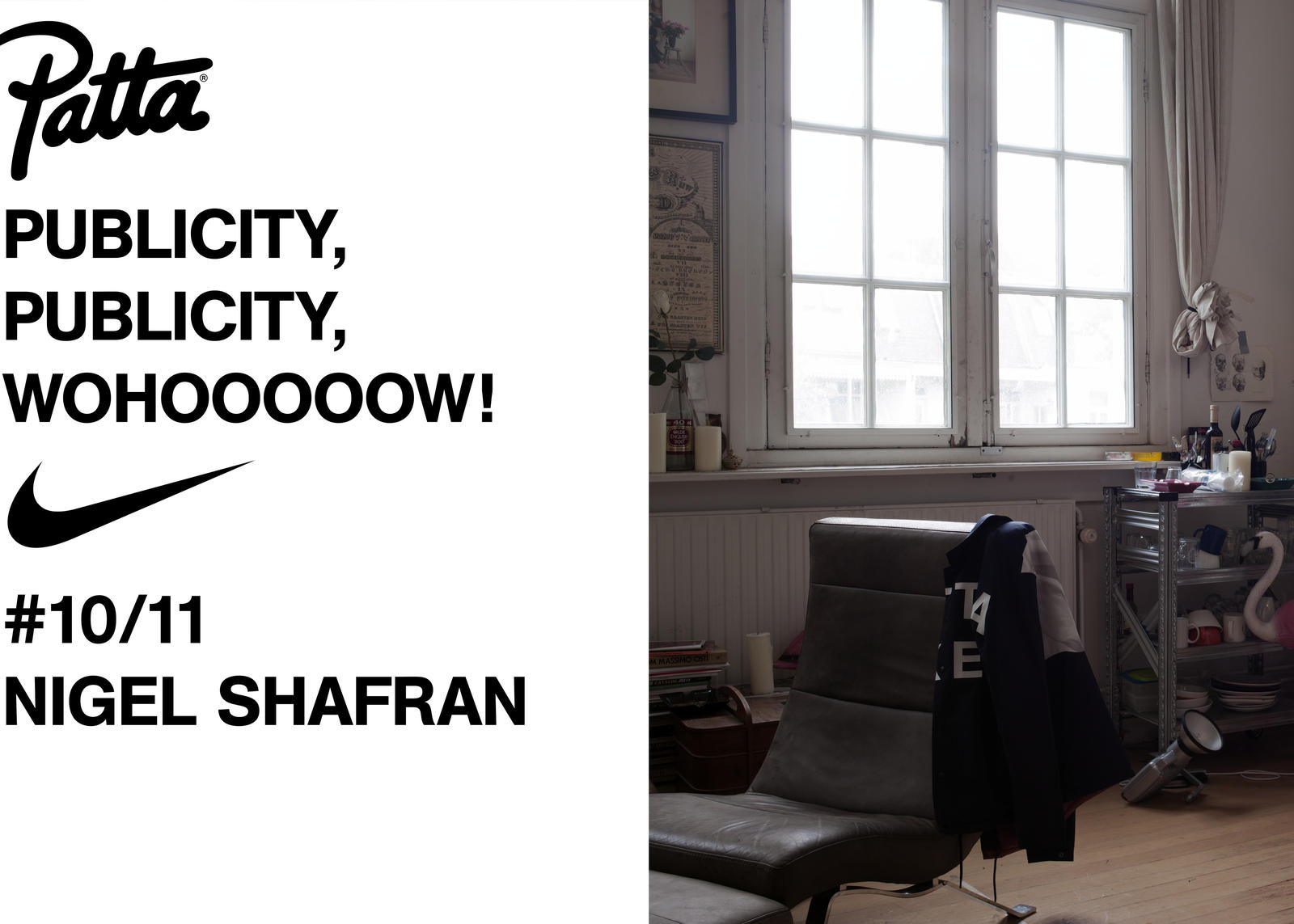 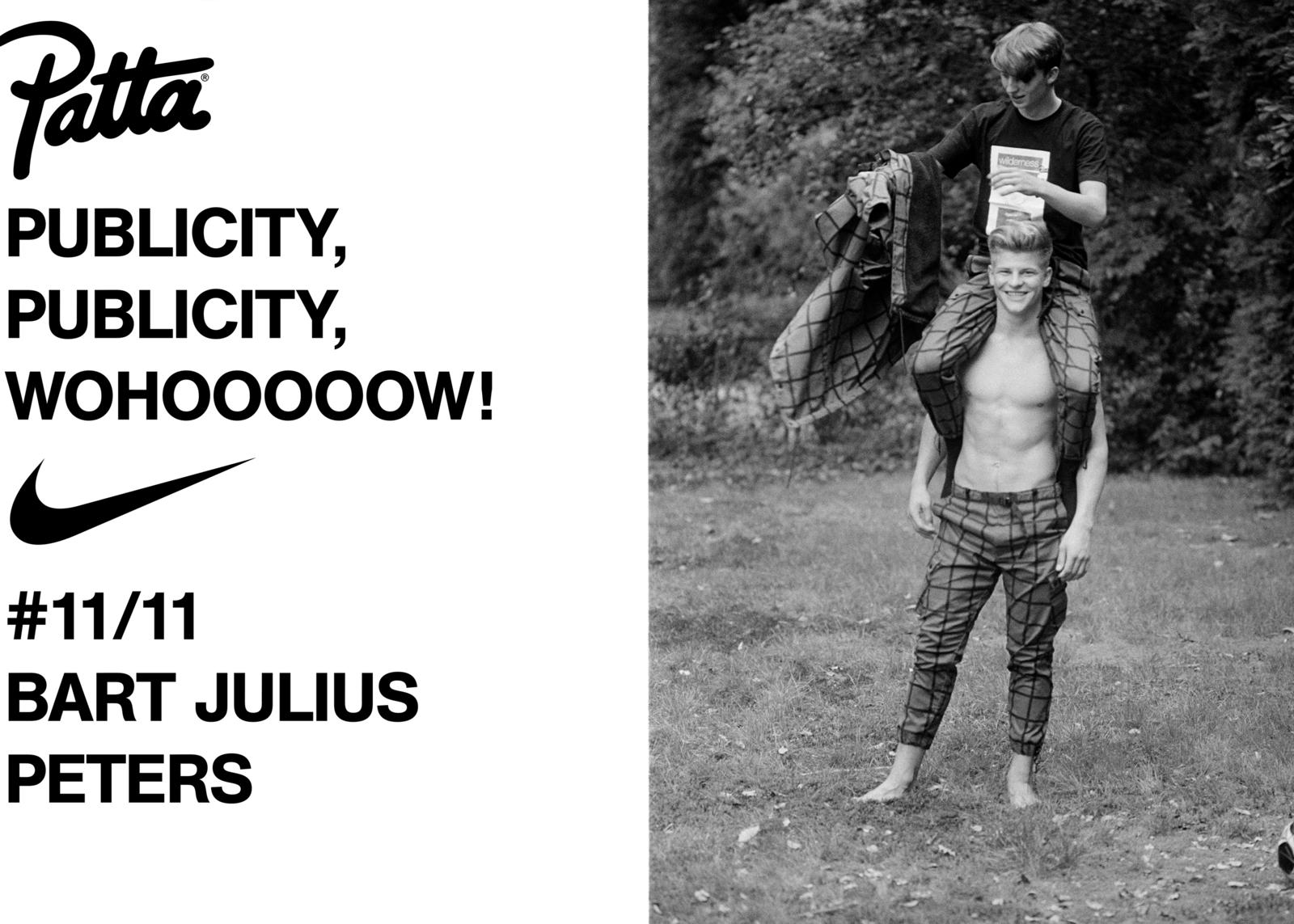 The final flourish of the collaboration is the Air Max 90 x 95. “Both silhouettes are among our favorites," says Van de Waal. "The Air Max 90 is a robust classic, and the 95 has always felt like a futuristic design; combining both forms a mix between classic and more technical design.”

By way of Nike by You, the mix is also available for further customization, broadening (again) the nature of the collaboration and inviting all participants an opportunity to give the shoe a personal spin. 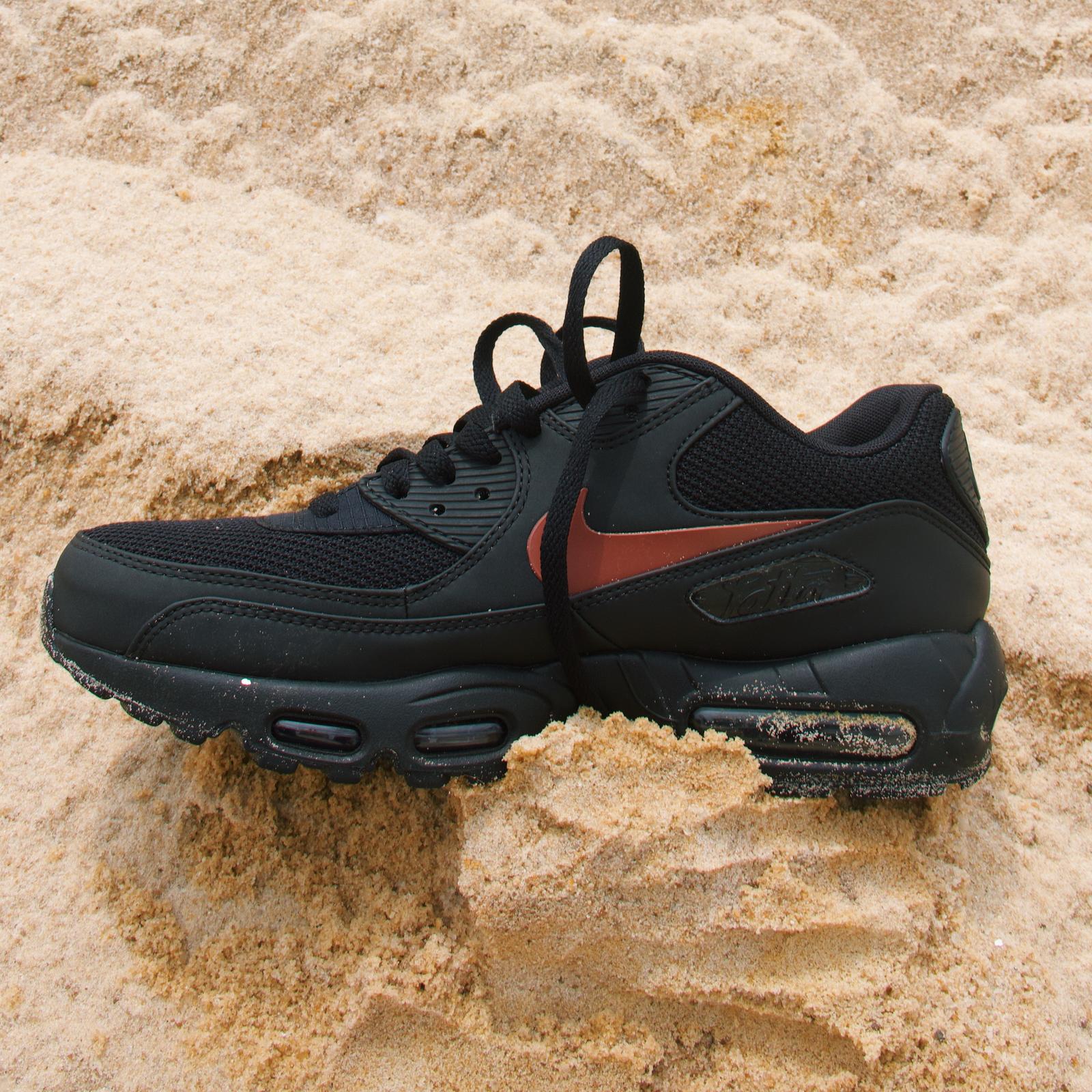 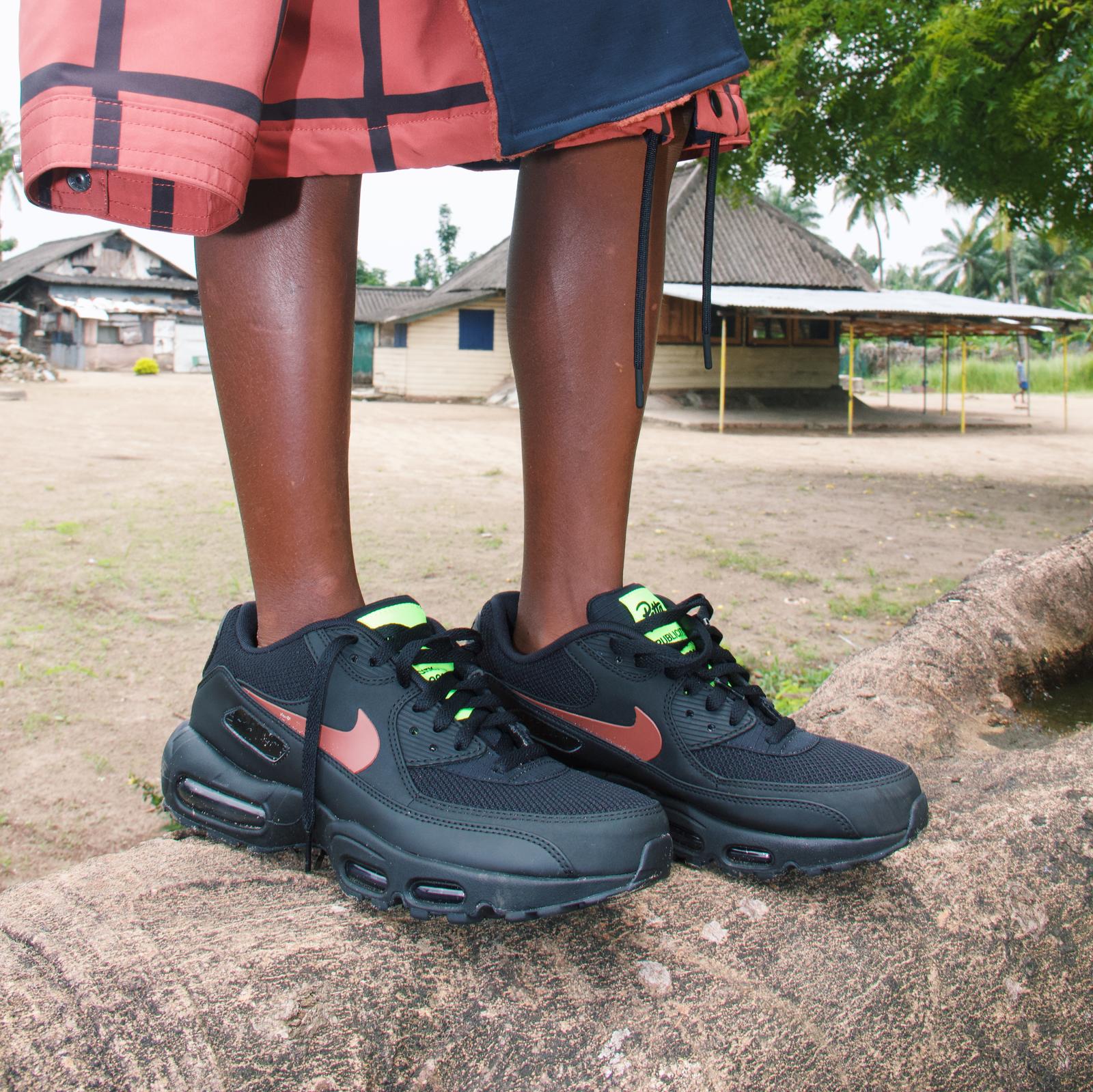 Van de Waal says of the Nike By You Air Max 90 x 95: "The Air Max 90 is a robust classic, and the 95 has always felt like a futuristic design; combining both forms a mix between classic and more technical design.” Photo by Stephen Tayo.

The "Publicity. Publicity. Wohooooow!” collection releases October 20 exclusively at patta.nl and at Patta stores in London and Amsterdam; it will be available globally October 27 at nike.com.