Full Circle: What The NB3 Foundation Cross-Country Team Teaches Us About Strengthening Community Through Play 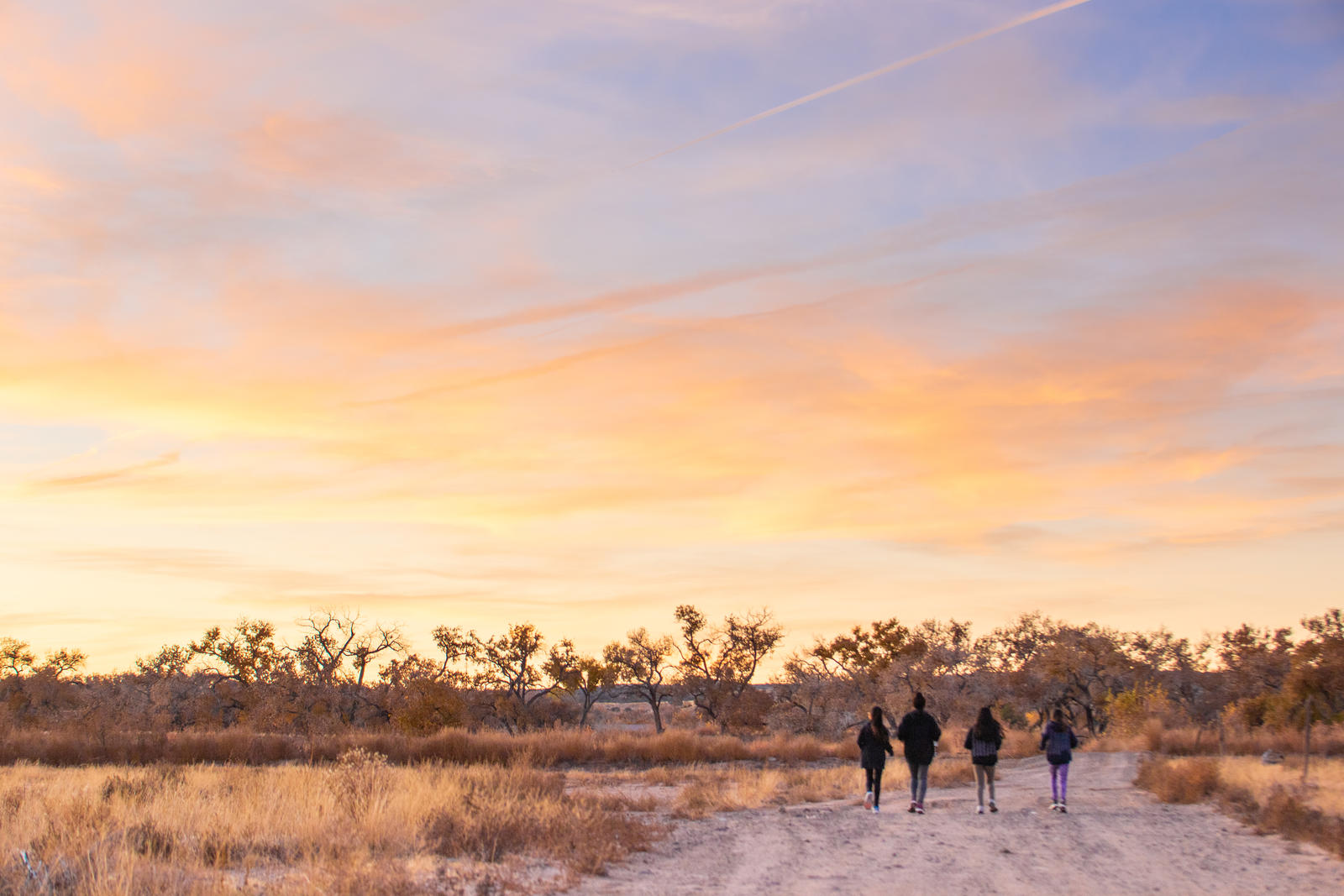 A group of girls from the NB3 Foundation Cross-Country Team run together.

In New Mexico along the banks of the Rio Grande, framed against the 79,000 acres composing the Pueblo of Santa Ana, is a path approximately one mile in length that the kids call “The Loop.” Beginning at the edge of the Tamaya Wellness Center, a giant multipurpose recreational space solely for the community, this dirt path is where the Notah Begay III (NB3) Foundation Cross-Country Team is practicing on a Wednesday autumn evening before they run in the region’s youth cross-country championships a few days later. For some of the kids, ranging in age from third- to eighth-grade, the upcoming race is the largest organized event they’ve competed in.

The team is running two miles tonight for practice, but of course, miles are the exercise language of adults, so the coaches speak in different terms as they corral the kids to the path. “How many laps are we running today?” The kids immediately shout over one another, some holding up one finger, others stretching out all 10. The kids teasingly groan when the coaches hold up two fingers. With no time to contemplate how those miles will feel to their legs, they toe the imaginary starting line in the dirt and take off on the coach’s mark, chasing the trail and following the fall evening’s golden hour. 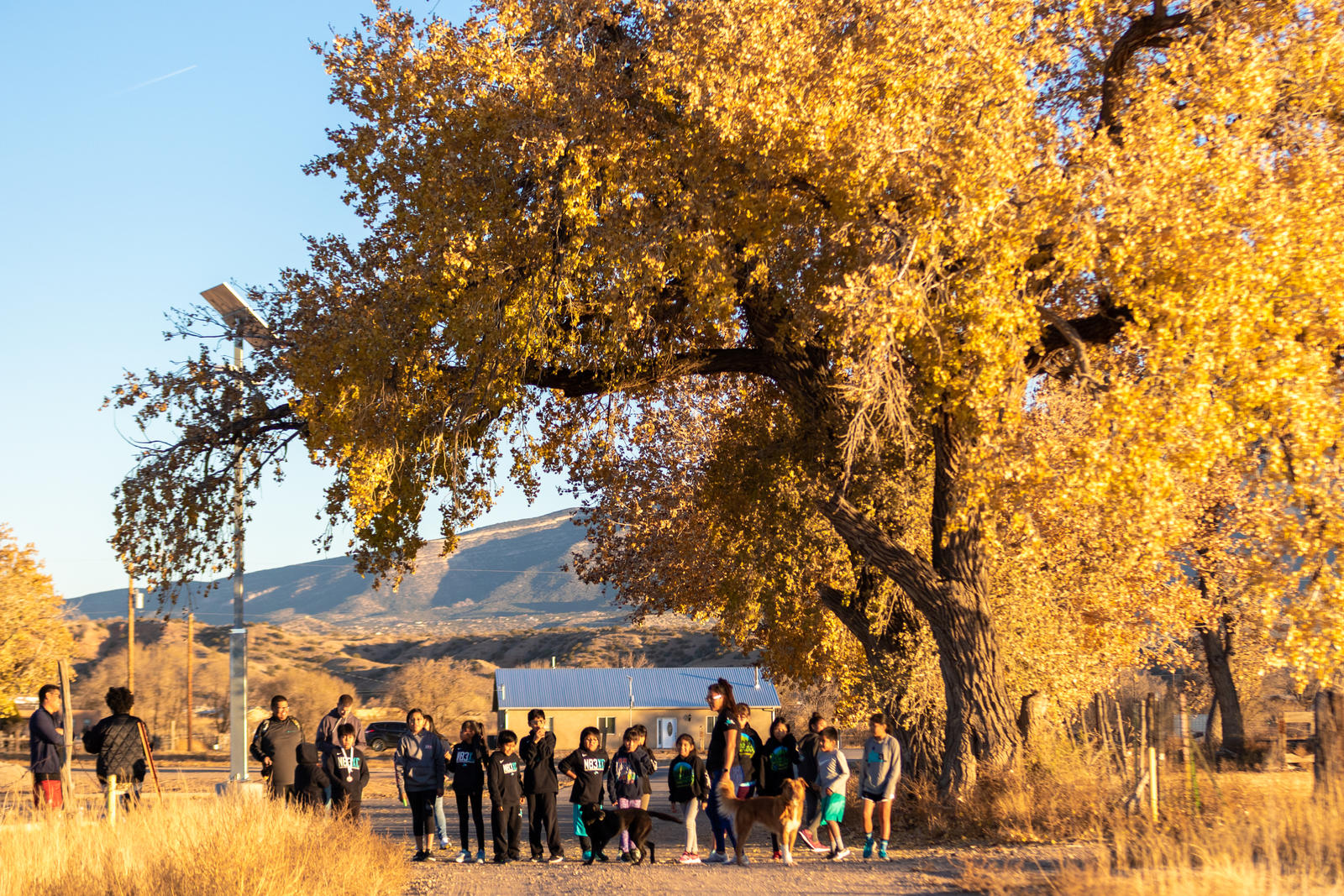 The kids gather near the tree that marks the beginning of The Loop. Of the 28 kids on the NB3 Foundation Cross-Country Team, only three have run recreationally before joining.

The NB3 Foundation unofficially began in 2005 as a family operation between professional golfer Notah Begay III, a Native American icon in the state’s sporting history (he’s one of the only Native American and Indigenous competitors to have played on pro golf’s professional tour), and his father. The premise was to give back locally and provide opportunities for young Native American children to play in sport, including running. The effort started as a direct program with little to no official infrastructure — family members coached and did community outreach. As the organization grew, so did the overwhelming reality of the Native American youth struggles with obesity and type 2 diabetes. So began a recognition of overall health and wellness that’s followed the organization for the last 15 years, leading to the creation of salaried coaching staffs, all led by Native American teenagers and adults in the community.

“Our philosophy doesn’t focus on coming up with a solution,” says Begay, "but in lifting up a solution that already exists in that community, and to support the capacity for people to manage, evaluate and conduct their work, recognizing that the tribes we work with have different values and traditions. We ask, ‘How do you respect that?’” 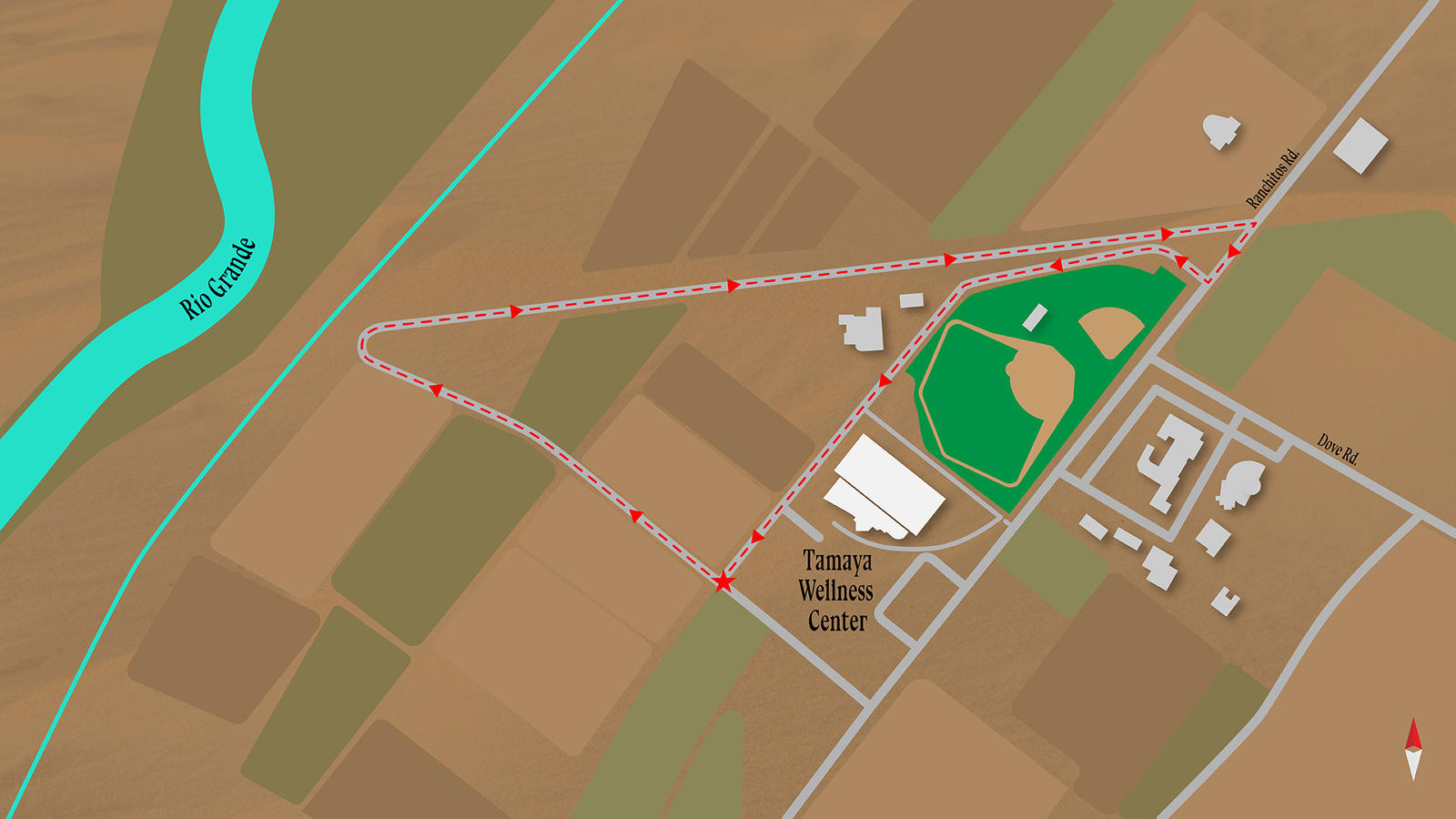 "The Loop" is roughly a mile in length and circles the Tamaya Wellness Center in the Pueblo of Santa Ana.

A philosophy of getting kids moving and active rings in the missions of both the NB3 Foundation and Nike Social and Community Impact. One shared method between the two groups is particularly effective: a collective-impact regranting model, identifying Native American-led organizations who strengthen their communities and facilitate effective methods to other Native American-led organizations to ensure positive impact.

One example is the annual Native Youth on the Move event in Albuquerque, in which the NB3 Foundation and Nike distribute up to 10 grants of $20,000 to Native-led community partners in the Albuquerque metro area to inspire kids to engage in sport, physical activity and unstructured play. Money is directed toward a number of areas, like collaborative days of play among the numerous pueblos and professional development within organizations to address systemic and preventable health issues while promoting healthy behaviors and self-efficacy. During the last four years, the NB3 Foundation has given 136 grants to Native-led community organizations across the country.

“Both NB3 and Nike believe in the power and strength of our young people,” says Begay. “Being healthy, physically active and civically engaged are important cornerstones to being a member of your tribe and being a human being.”

The last few years of the NB3 Foundation have brought another evolution to the program that’s more aspirational in scope. Coaches want the kids to see themselves at different levels of running, an idea that punctuates the children’s excitement to represent their tribes in the regional race.

Among the kids who run in the program, not even a third will join their school teams because many are put off by the environment of competition, says Clint Begay, brother of Notah and the lead cross-country coach of the NB3 Foundation team. That’s where the NB3 Foundation staff strives for the coaching curriculum to hit home; they want these kids to believe in themselves, however they see a run — or a game, or a workout — measured on the rubric of their childhoods. 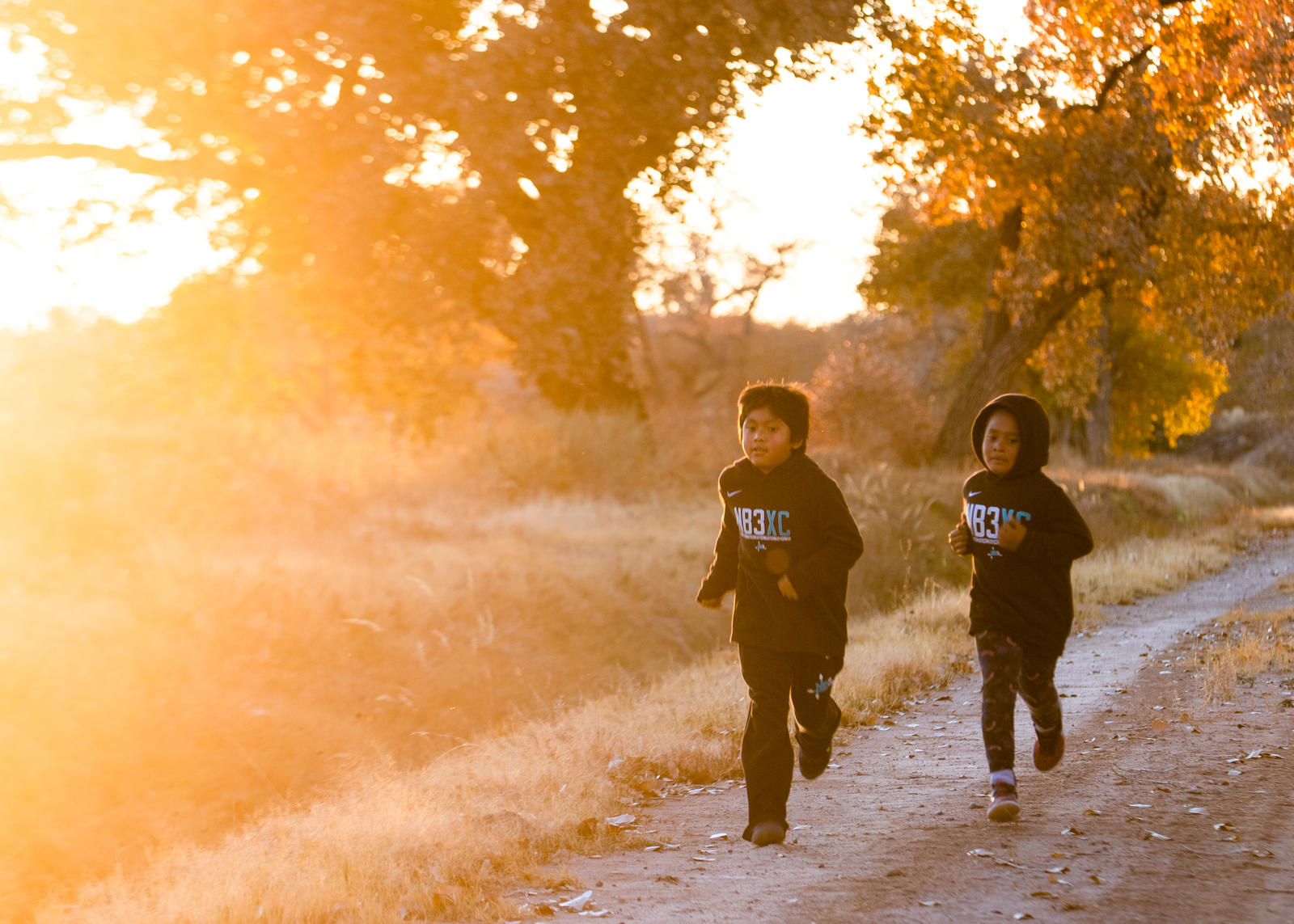 The kids set the pace as a cooling dusk wind nips at their feet. 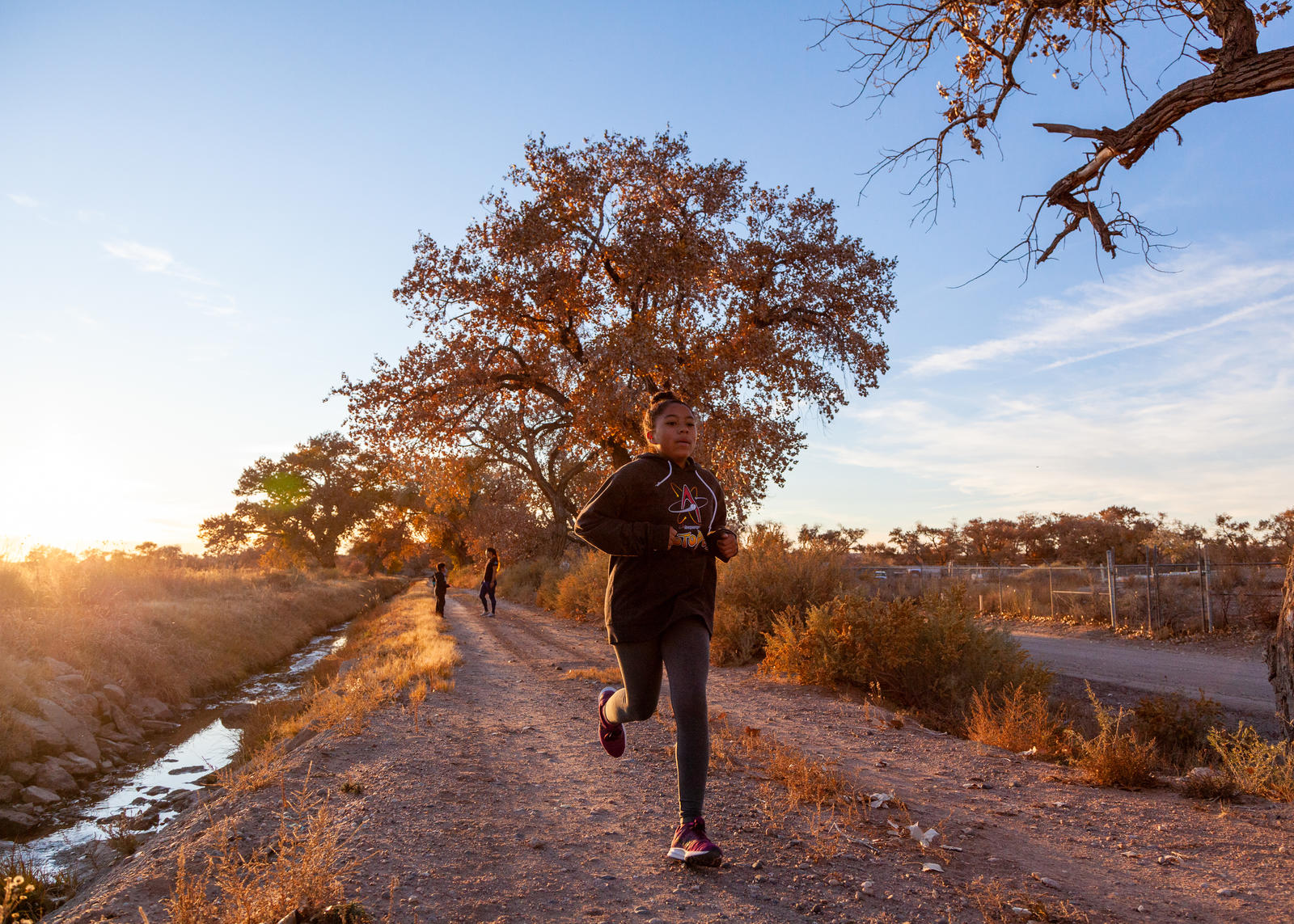 The majority of kids on the NB3 Foundation Cross-Country Team are girls. 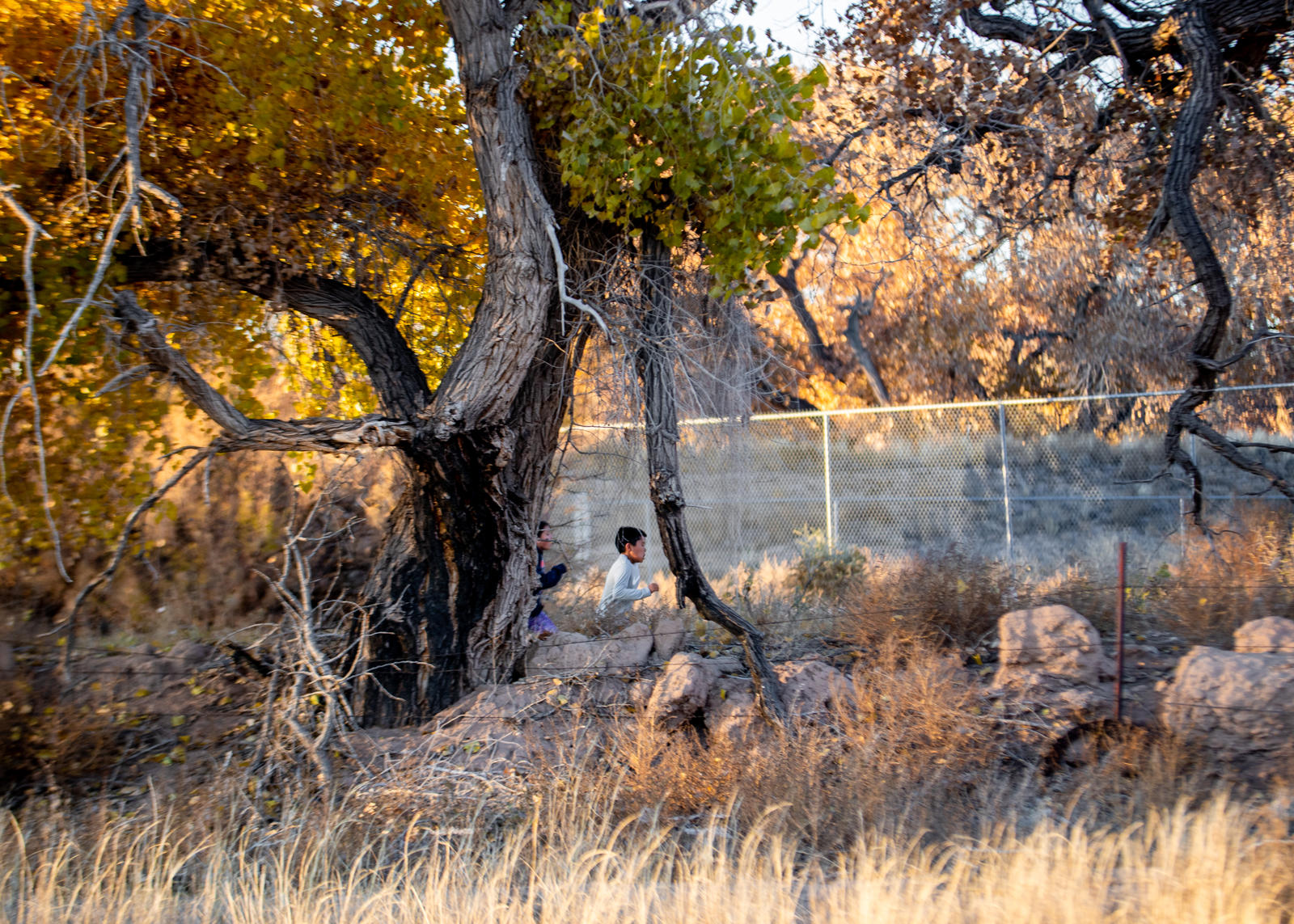 The training runs are divided into three categories: The Loop, long runs (sometimes up to four miles) and hills, which guide the kids through the rolling terrain along the Rio Grande. 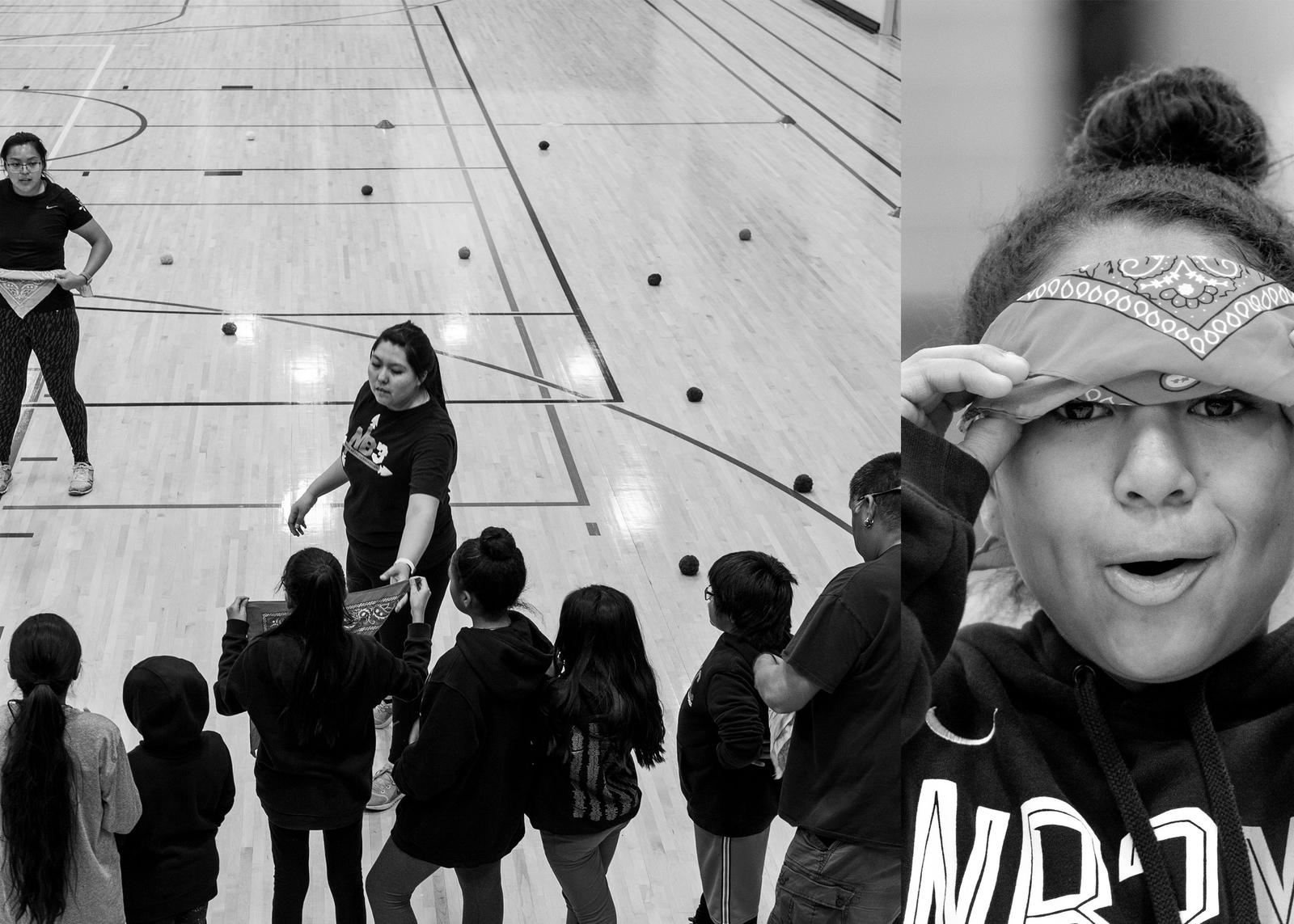 One of the last events of the night is a leadership game designed to model a good habit that the kids can take home with them. This game, called “Blind Tanks,” is a combination of Marco Polo and dodgeball, and teaches kids the importance of listening. 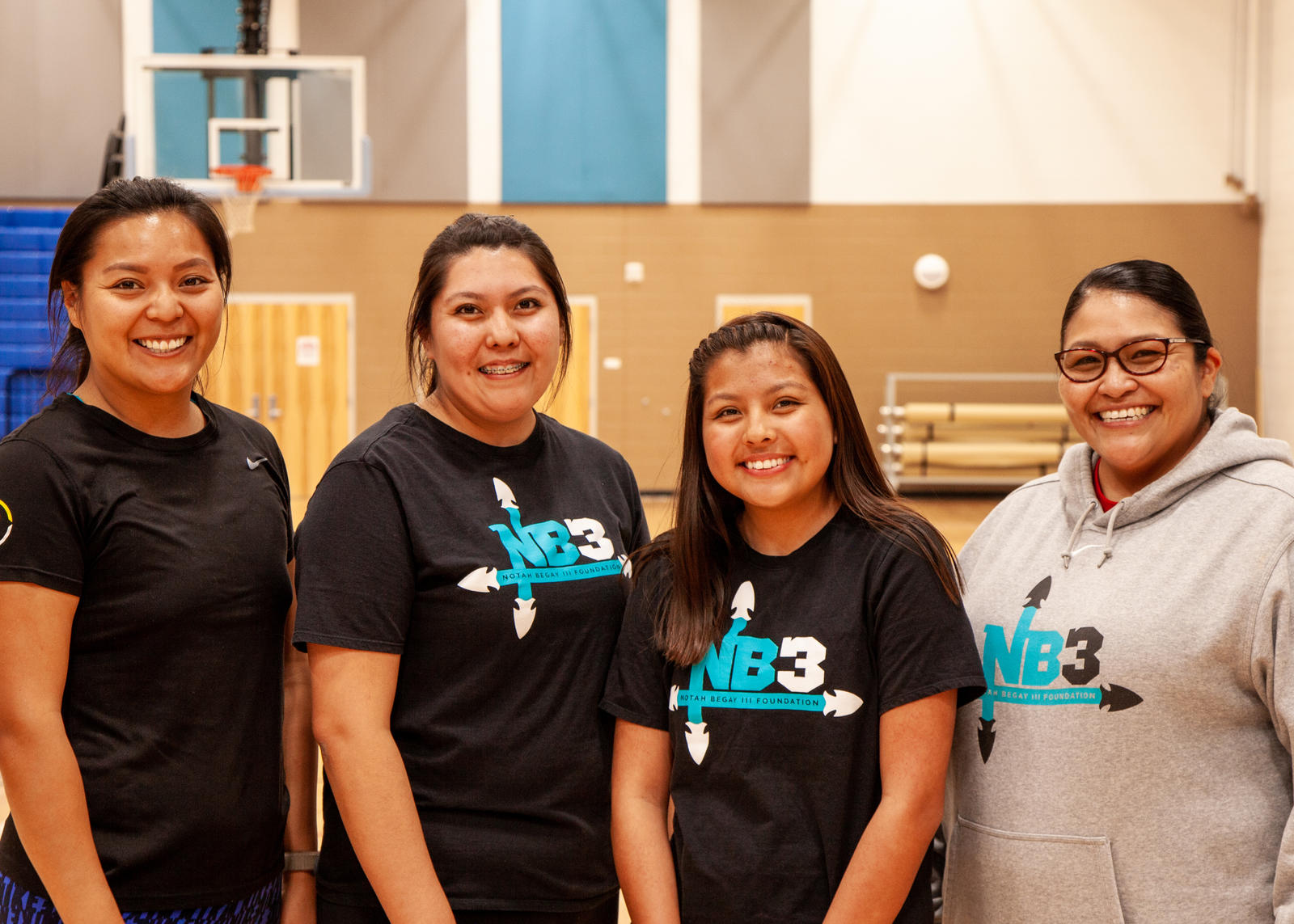 The coaches of the NB3 Foundation Cross-Country Team.

Later that weekend at the regional race, the team’s success was stamped in the form of times and personal victories. The 8-and-under girls team placed first in their age group and qualified for the national race in Madison, Wisconsin. One of the boys rounded out his 94-person age group, but his time was his best all season, and he wore the same playful levity during the race as he did in practice.

“For my son, this race was just another run around The Loop, and he’s happy with that,” says his father. “He’s out here having fun. He’s building friendships. He’s staying healthy through exercise. He’s learning life lessons. For him, cross-country is doing exactly what it should in his life.”