The commitment to women's football is stronger than ever today and has evolved into a truly dual-gender approach to the game.

In the '90s, Nike emerged not only as a global power in the sport, but as a leader in respect and recognition of all footballers. 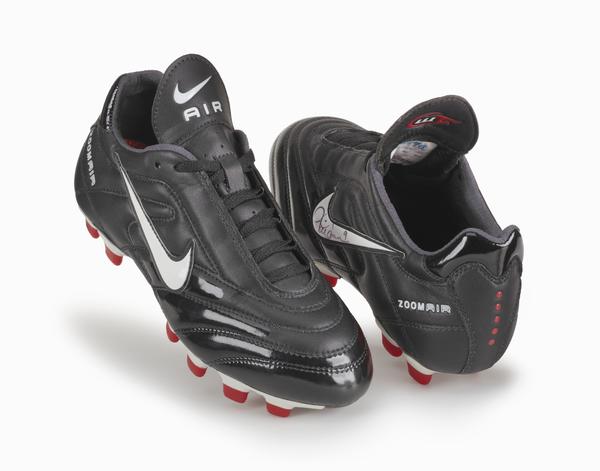 With the signing of American superstar Mia Hamm in 1994, Nike began championing women in football and inspiring the next generation of athletes. That same year, Nike began its partnership with the U.S. Soccer Federation. The subsequent uniform design for the 1996 gold medal winners laid the groundwork for women's football apparel innovations to follow. The decade rounded out with Hamm as the face of a new boot, the Nike Air Zoom M9 F.G. — the brand's first women's-specific model.

In the years since, Nike's support of players, clubs and federations has evolved, as have the products. Here, a brief history of Nike's pioneering efforts on the pitch:

Hamm was the first of what has become a standard-bearing line of American female footballers at Nike. United States legends Abby Wambach (the leading international goal scorer in history), Alex Morgan, Carli Lloyd and Megan Rapinoe followed to form their own legacy. Now, a new generation of U.S. footballers, including 2017 signee Mallory Pugh, are poised to write the future.

They are not alone.

Around the world, the level of Nike athletes is no less astounding. Canadian Christine Sinclair is the second-ranked international goal scorer in history (for now). Sam Kerr leads Australia with her back-flipping flair. Lieke Martens helped take the Netherlands to the top in 2017.

In 2019, Amandine Henry, Lucy Bronze and Shanice van de Sanden claimed UEFA Champion's League glory, while Barcelona's Toni Duggan and Chelsea's Ji So-yun registered some of the most memorable goals in the competition.

These talented players advance the quality of top-flight play. One become many. And, in turn, these players motivate ever more up-and-coming stars. 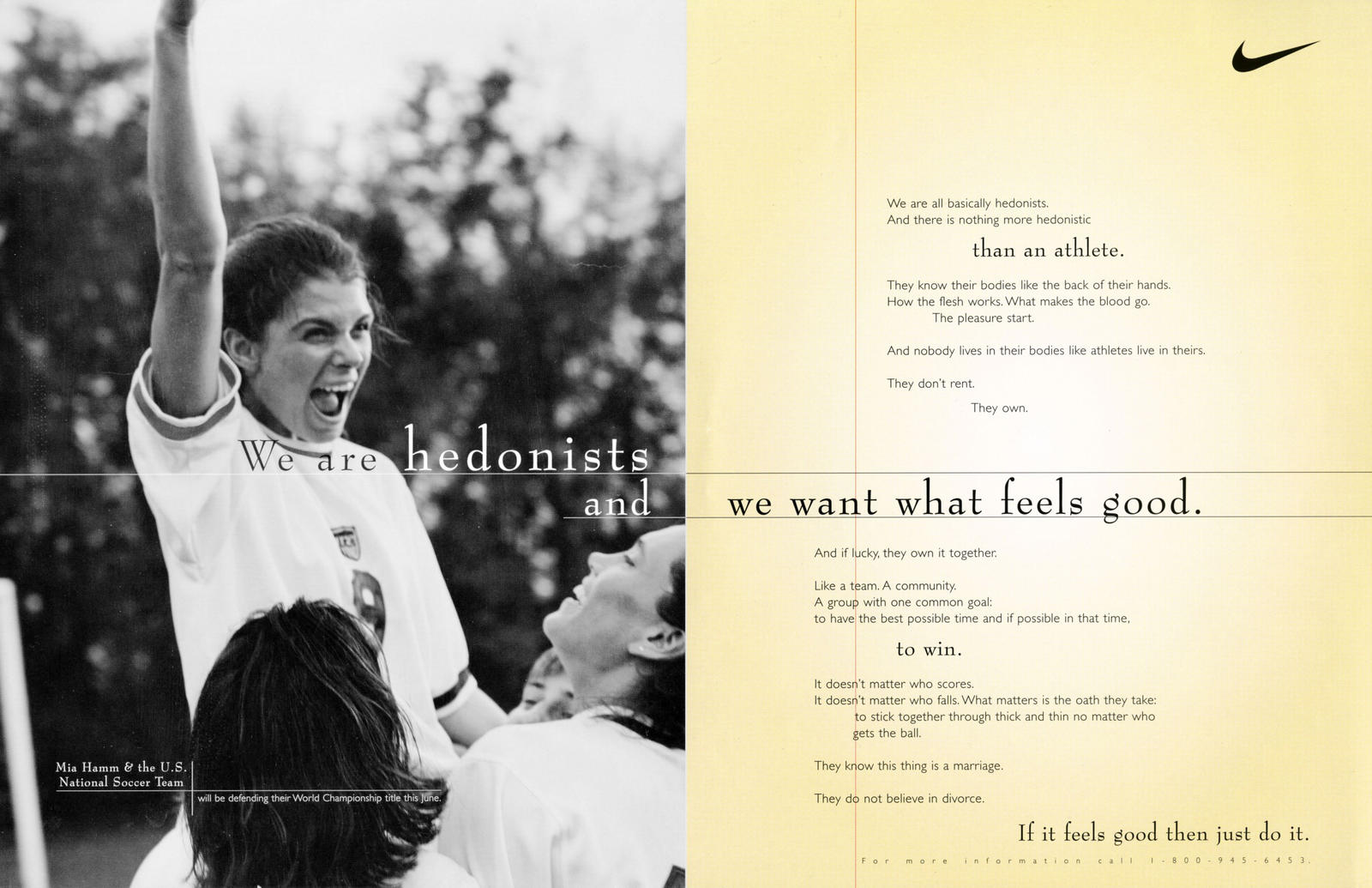 Hamm appeared in this 1995 print ad, which celebrates the visceral joy of athletic engagement and the thrill of competition. The ad was one of several of the era that empowered women in sport and encouraged participation. In 1998, Nike WHQ opened its biggest building to date under Hamm's name, honoring her achievements as one of the greatest players of all time and the inspiration of a generation.

Hamm wasn't only Nike's first female footballer, she was also the first footballer to wear the Nike Air Rio. The 1995 release featured Tensile-Air cushioning and full-grain leather, and marked the beginning stages of dual-gender product testing in football. Highlights include the 2004 Nike Mercurial Vapor II, the 2015 Hypervenom II, the 2018 Nike Mercurial 360 Flyknit and the 2019 PhantomVNM. 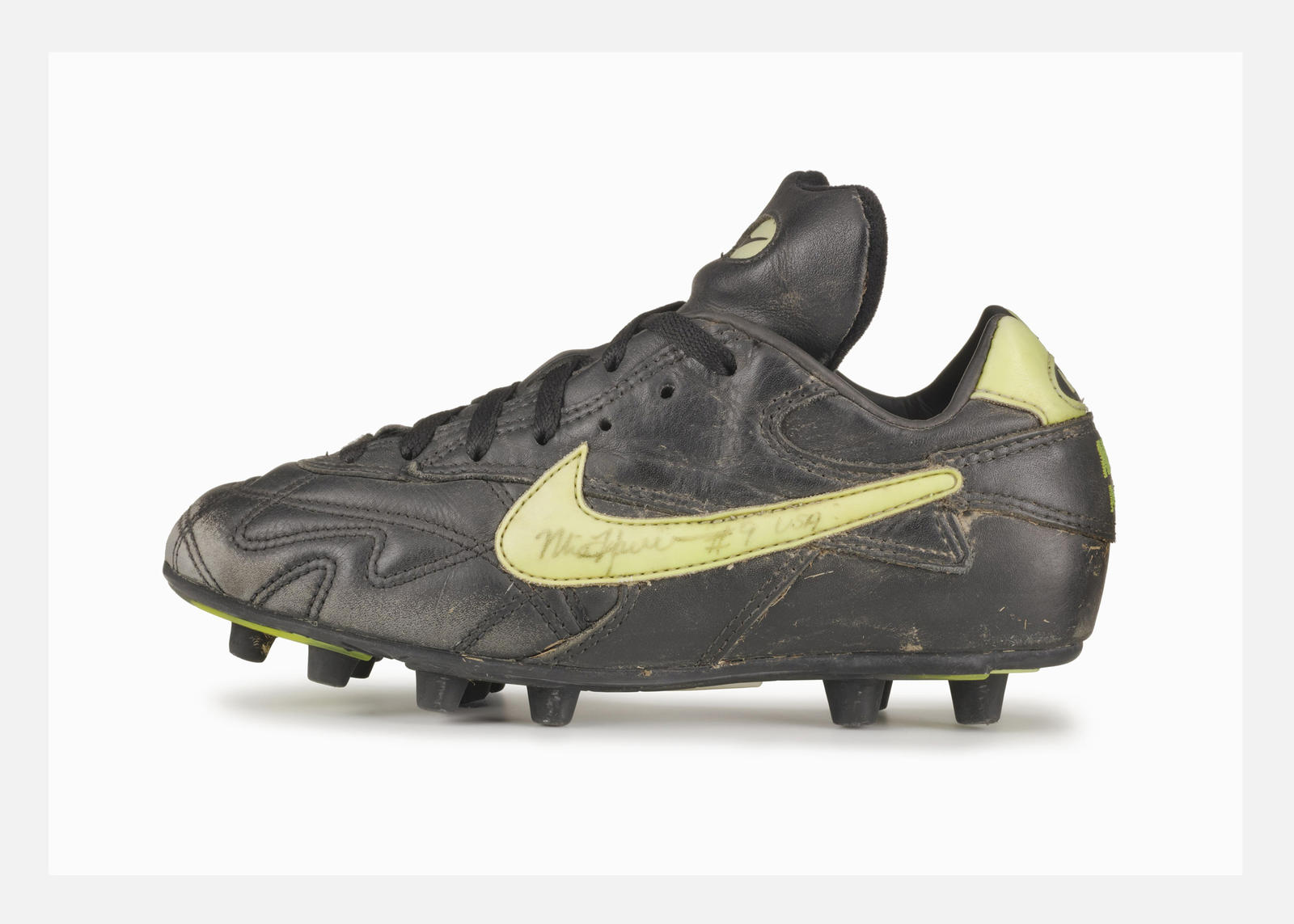 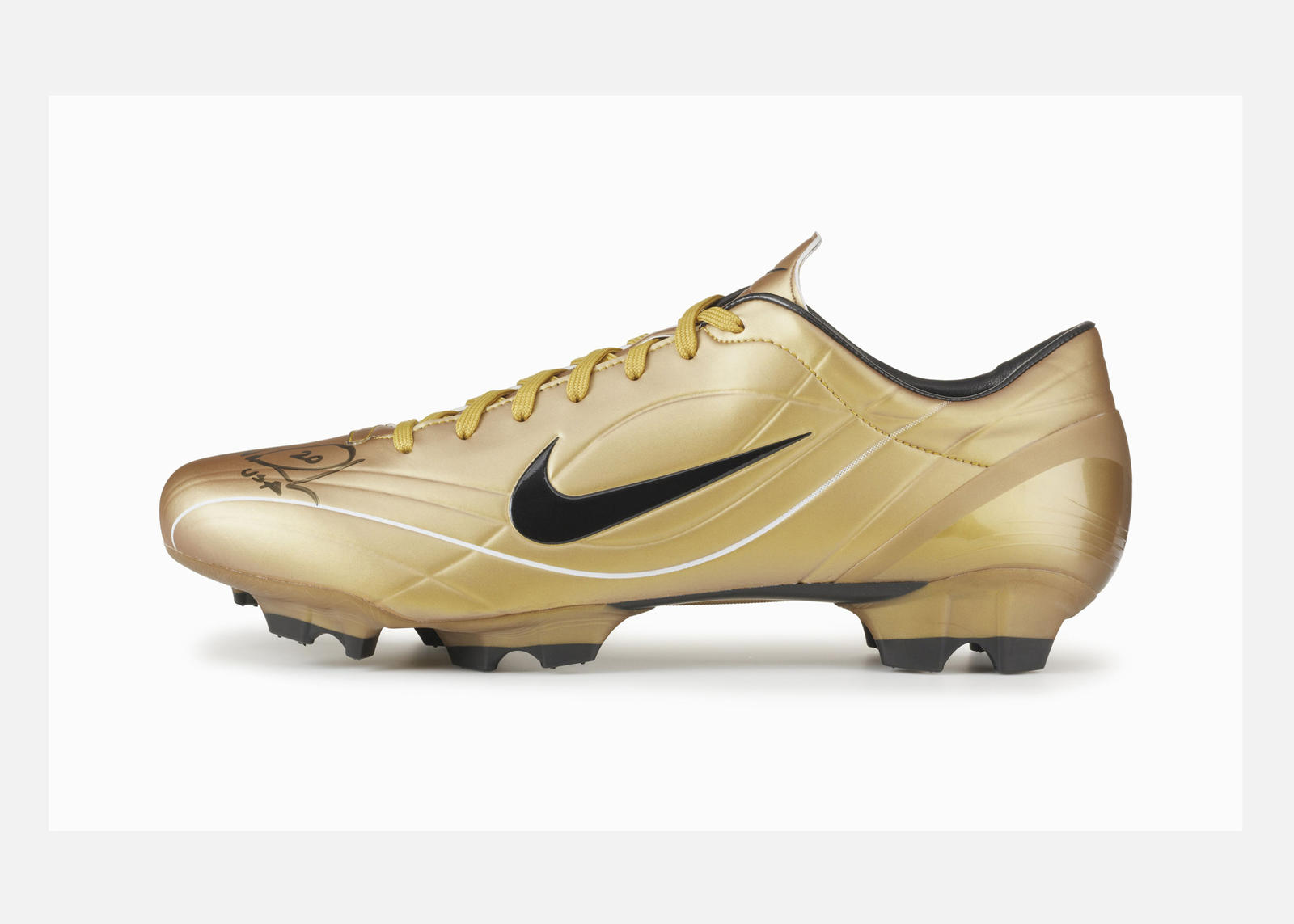 The iconic Mercurial Vapor II FG was worn by Wambach in the final of the 2004 games. 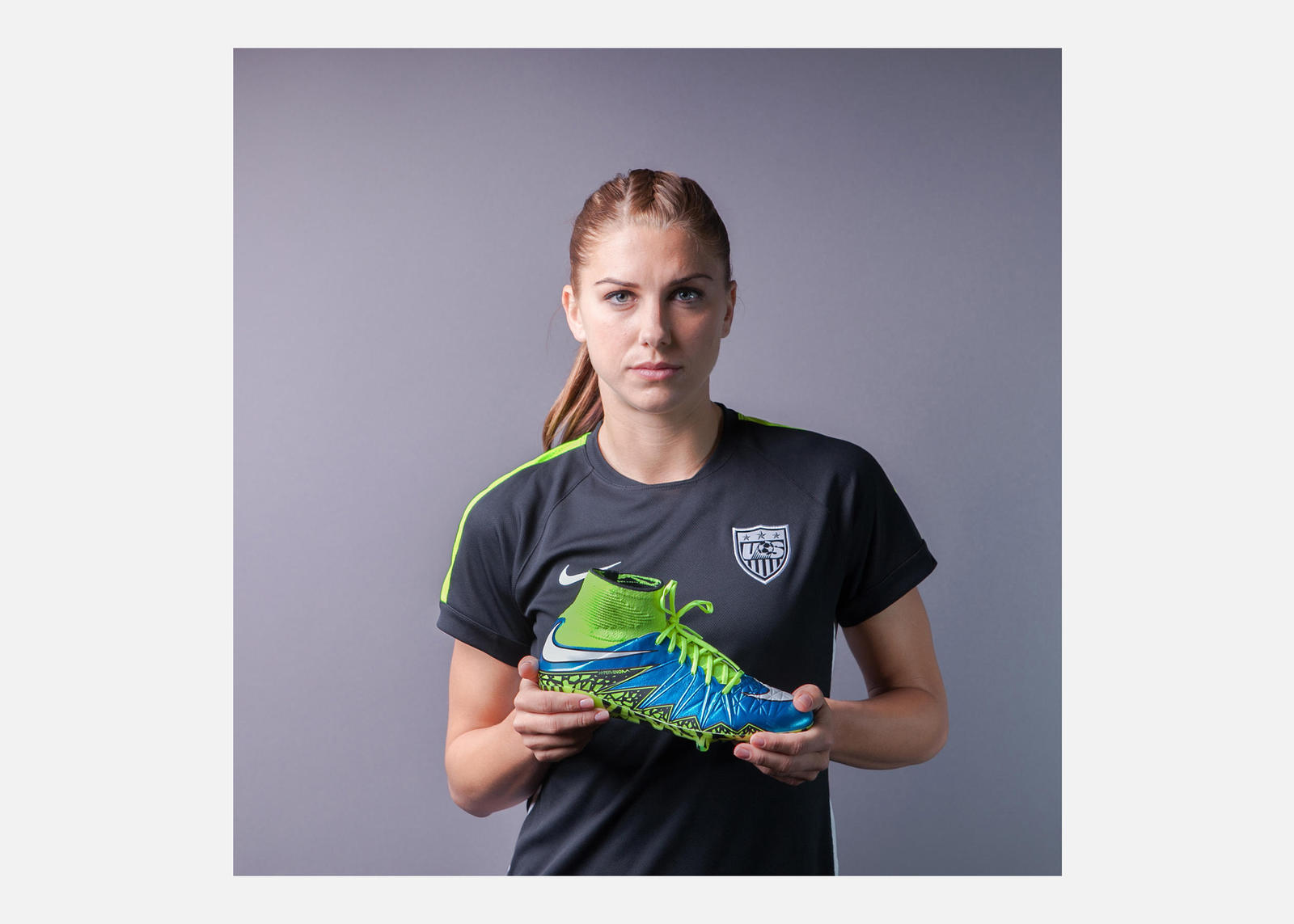 Alex Morgan with the 2015 Hypervenom II 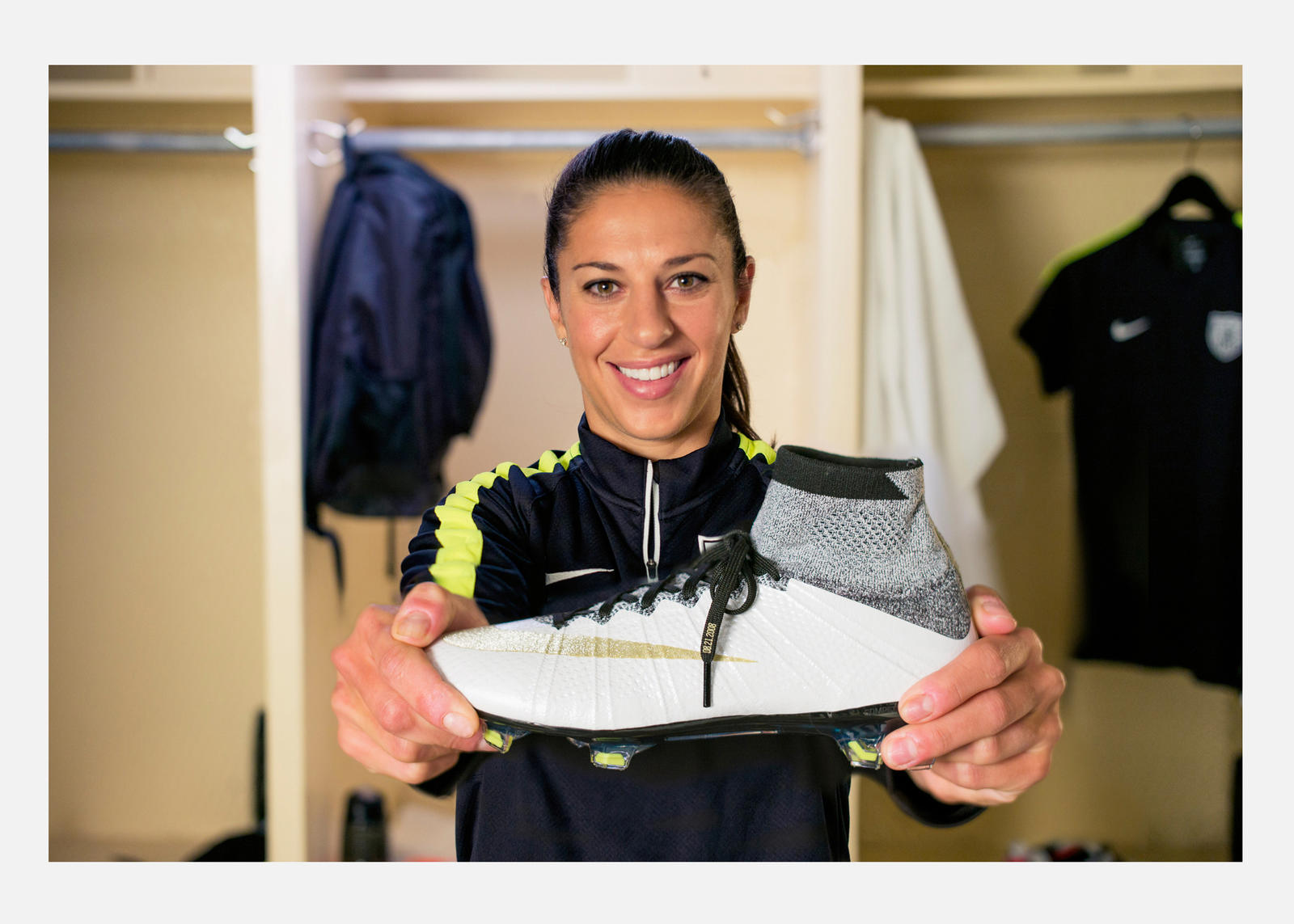 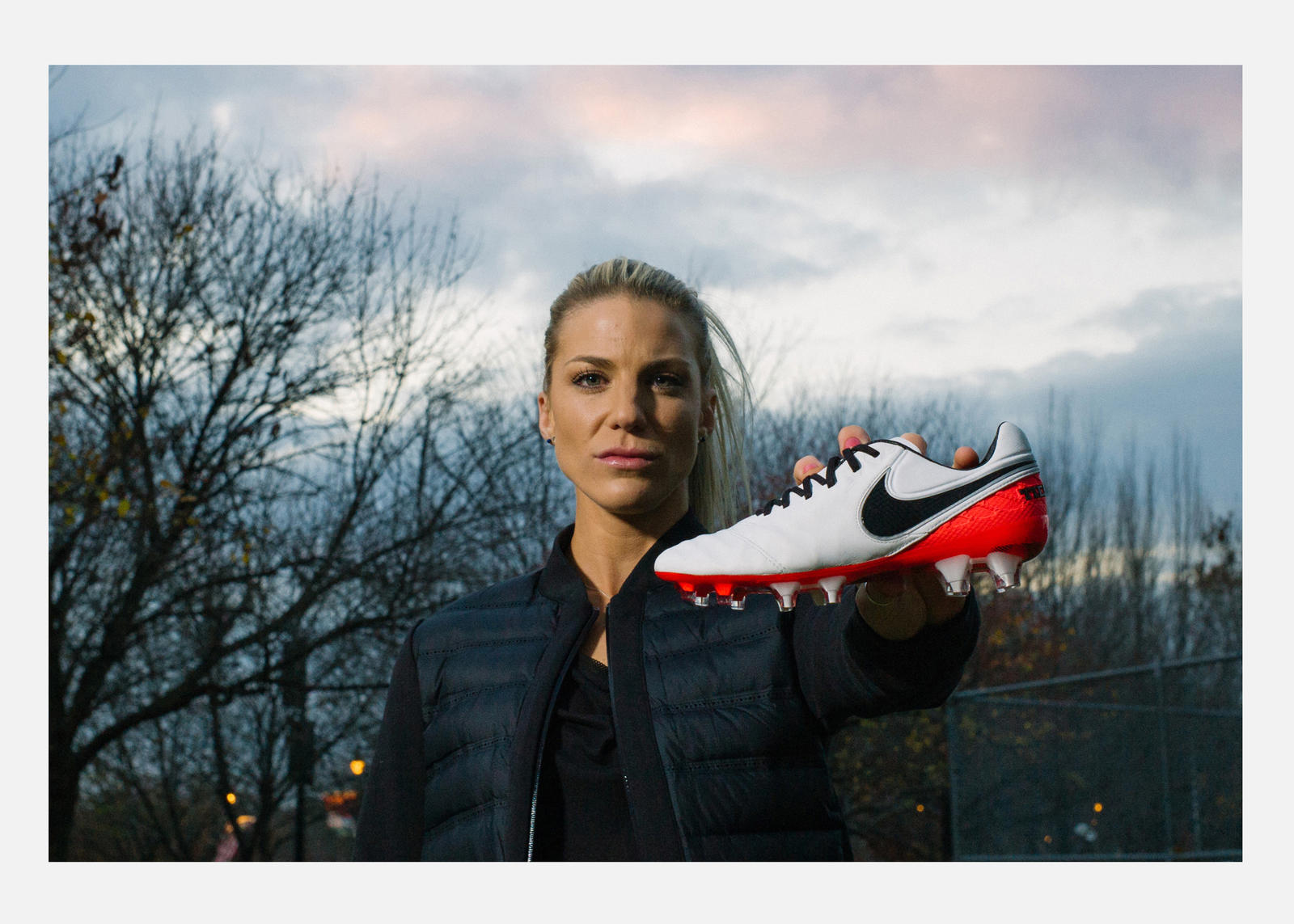 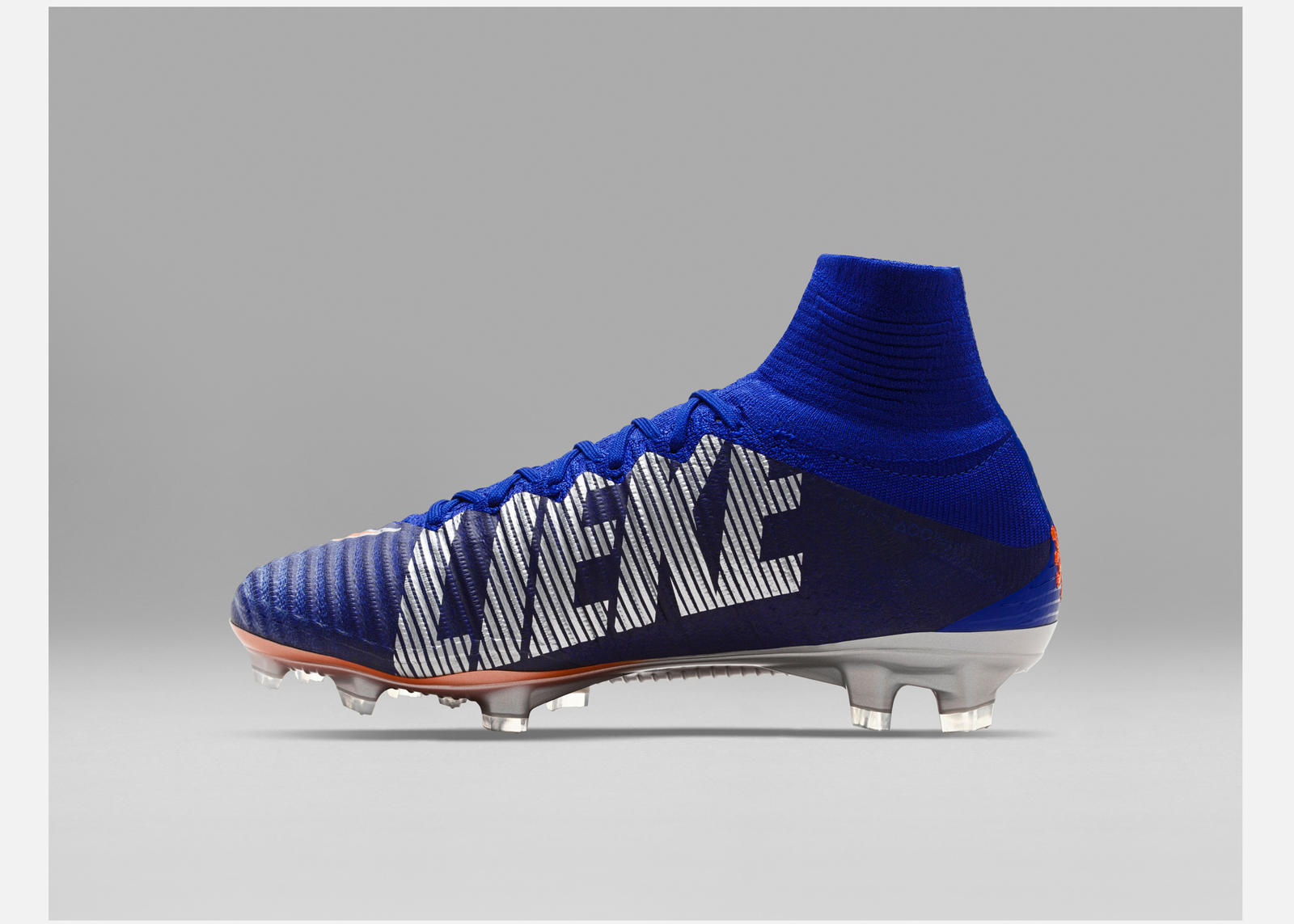 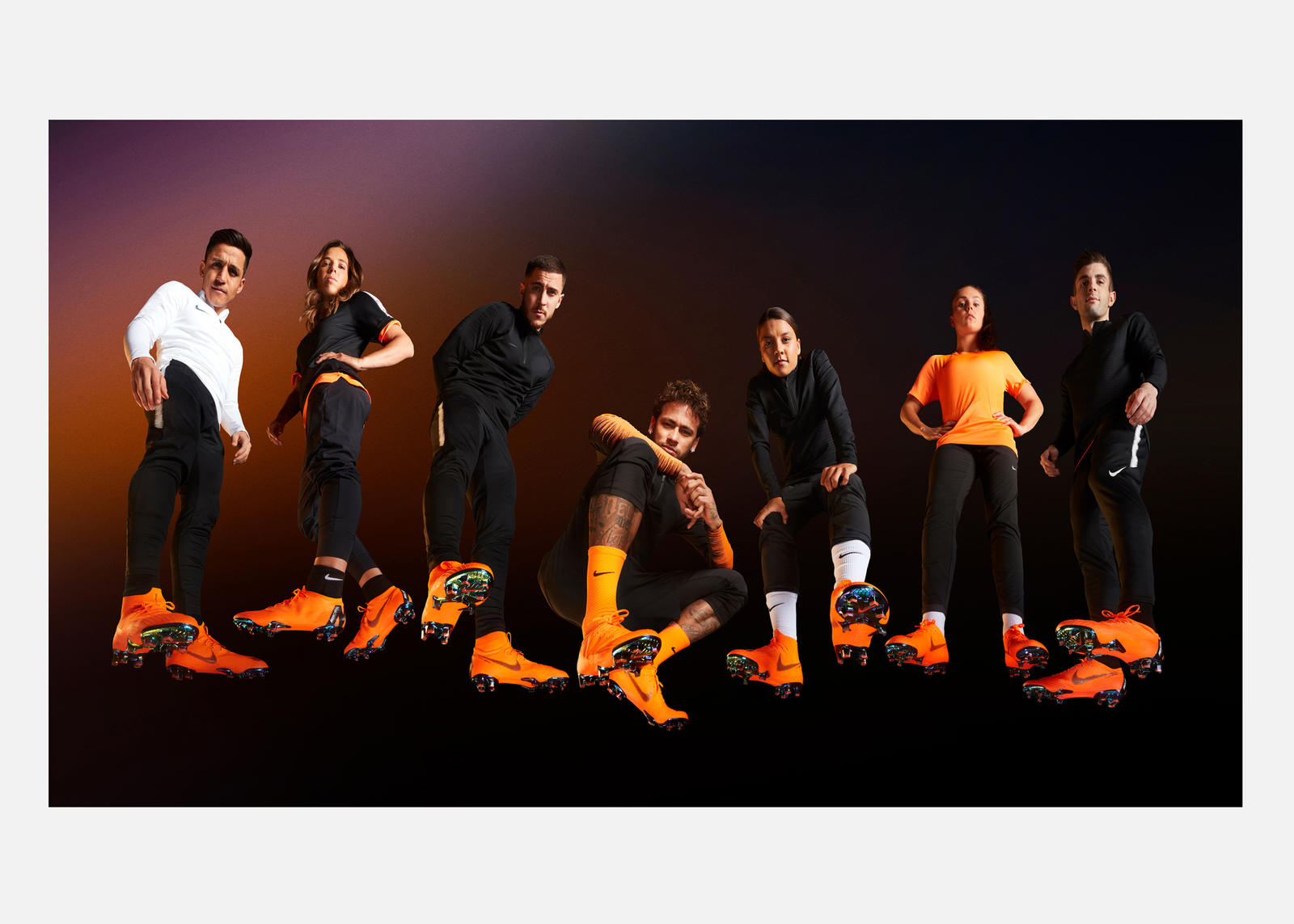 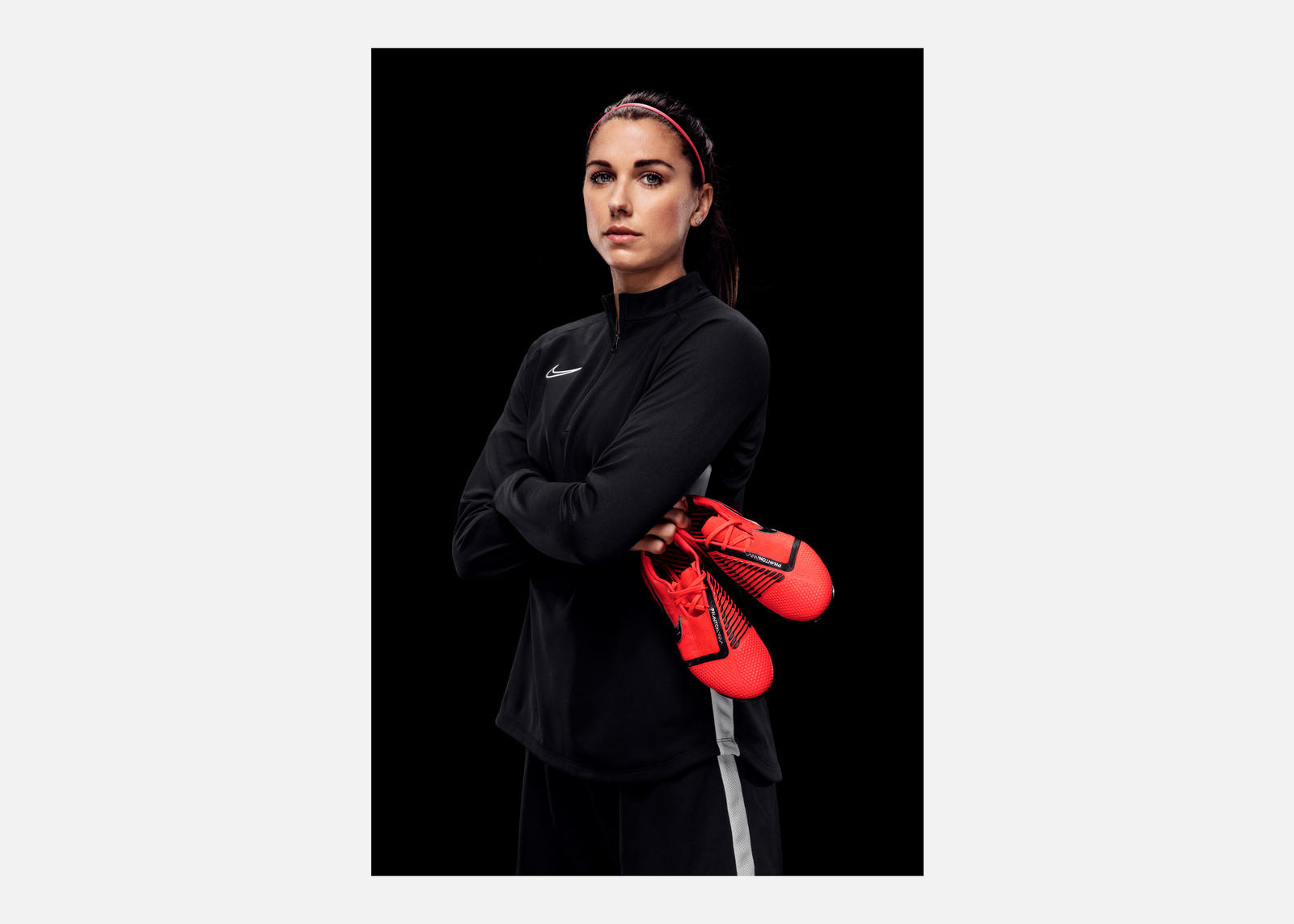 Morgan and the 2019 PhantomVNM 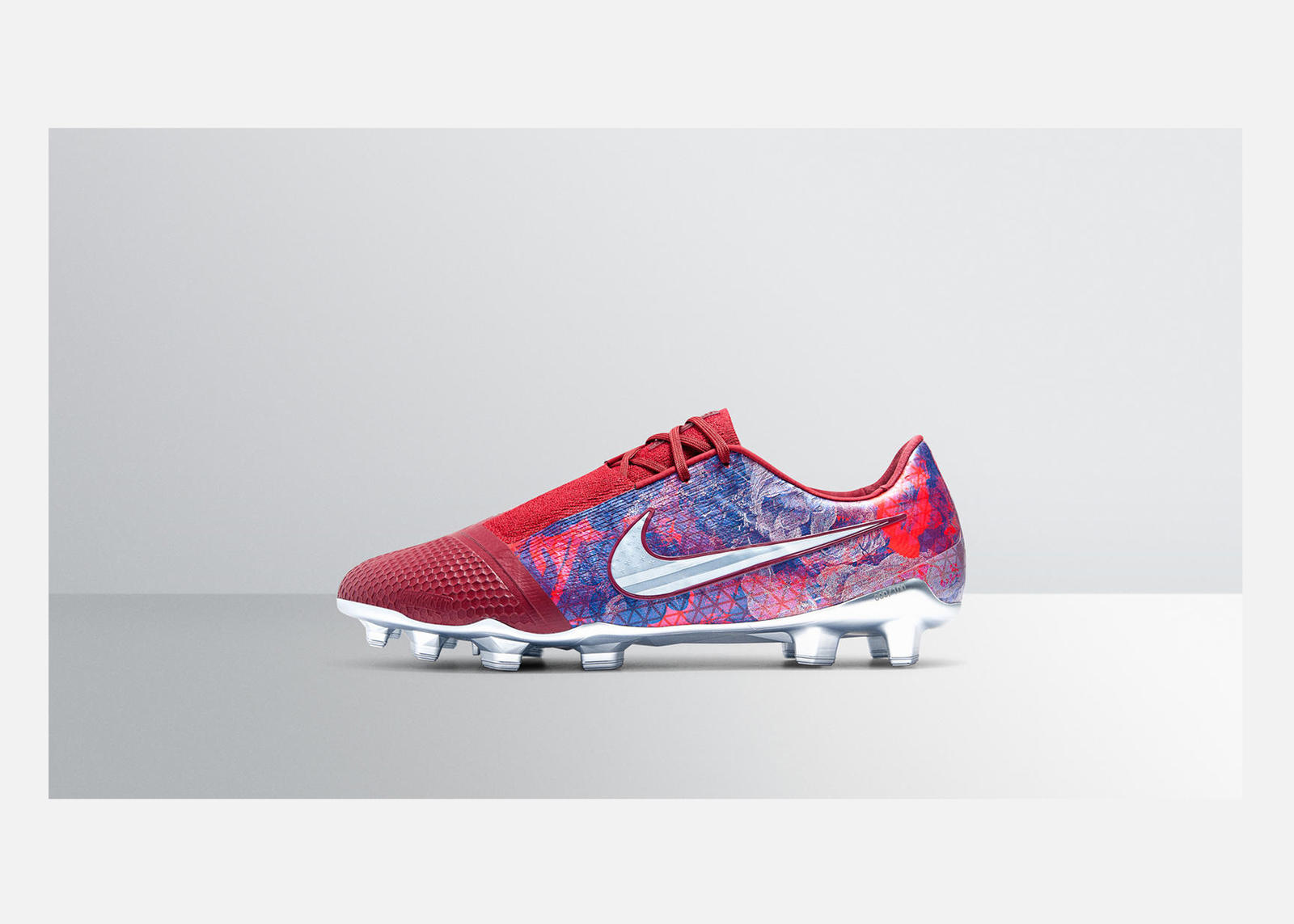 Beyond the core boot offerings, a select group of women have also been honored with special-edition boots, including Lloyd's "Leave Your Legacy" Mercurial Superfly, Martens' commemorative Mercurial in 2017 and Morgan's PhantomVNM.

Since early 2018, Nike has extended its football boot sizing, providing adult options and unisex colors down to size 4 to account for smaller feet (adult sizing previously began at men's size 7). The Mercurial was the first boot to be offered in expanded dual-gender sizing, now all Nike Football silhouettes are included. Players are able to see an inclusive size guide on nike.com and displayed in the product box for an easier buying experience. This step helps ensure all athletes begin play with the same elite performance platform, regardless of foot size.

Supporting elite football is a critical component of Nike's efforts in the sport. Club and federation partnerships highlight this endeavor and over the years, female athletes have been positioned alongside their male counterparts to create a united front. France, England, Brasil, Chile, Nigeria and the United States are among the examples.

Nike partners with 14 international federations playing this summer in France. The kits for each feature a new women’s-specific fit and, in many cases, represent the first time a federation has had a unique design for its women’s team. 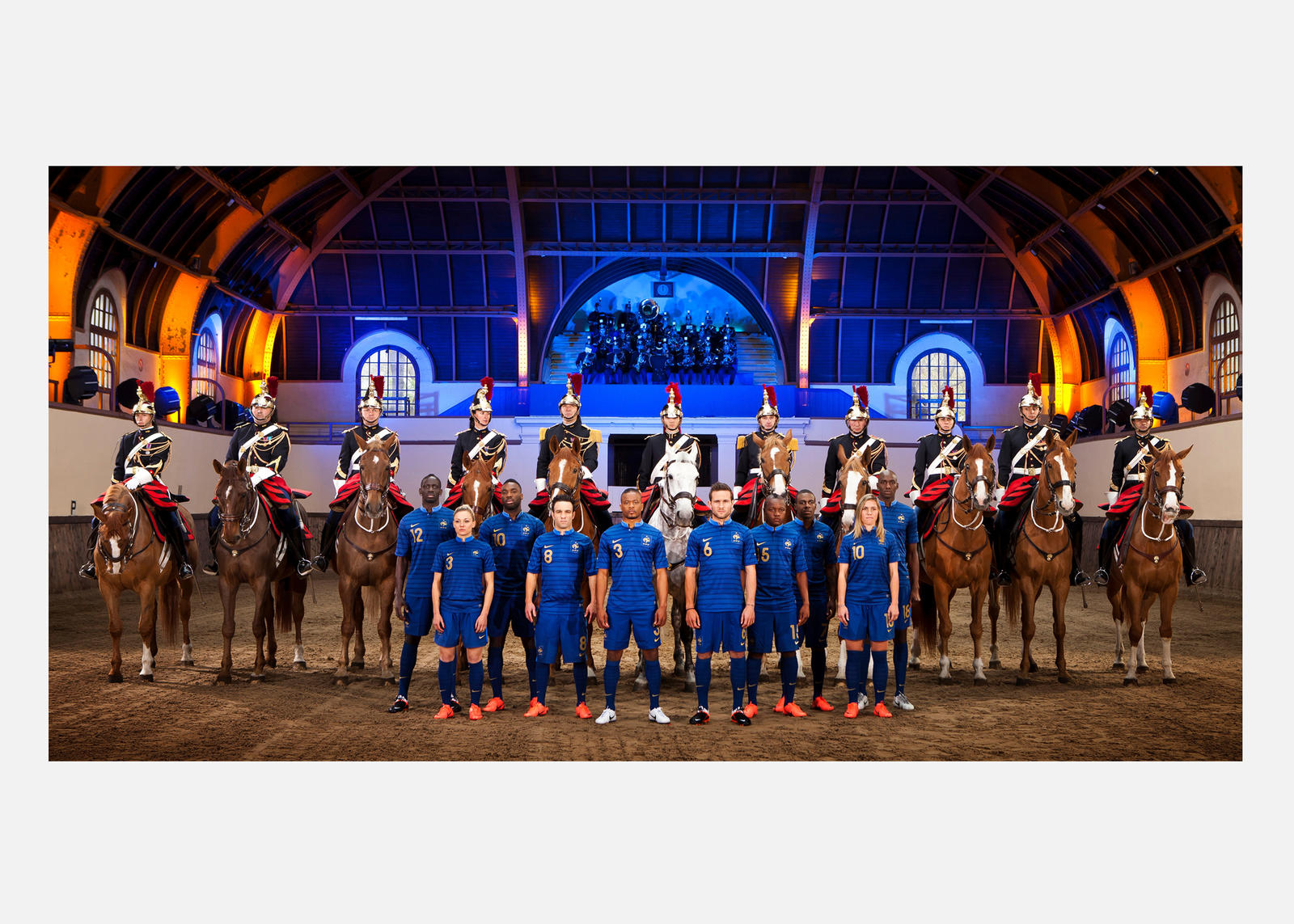 The 2011 French Football Federation; in 2016, Nike and FFF extended their partnership through 2026. 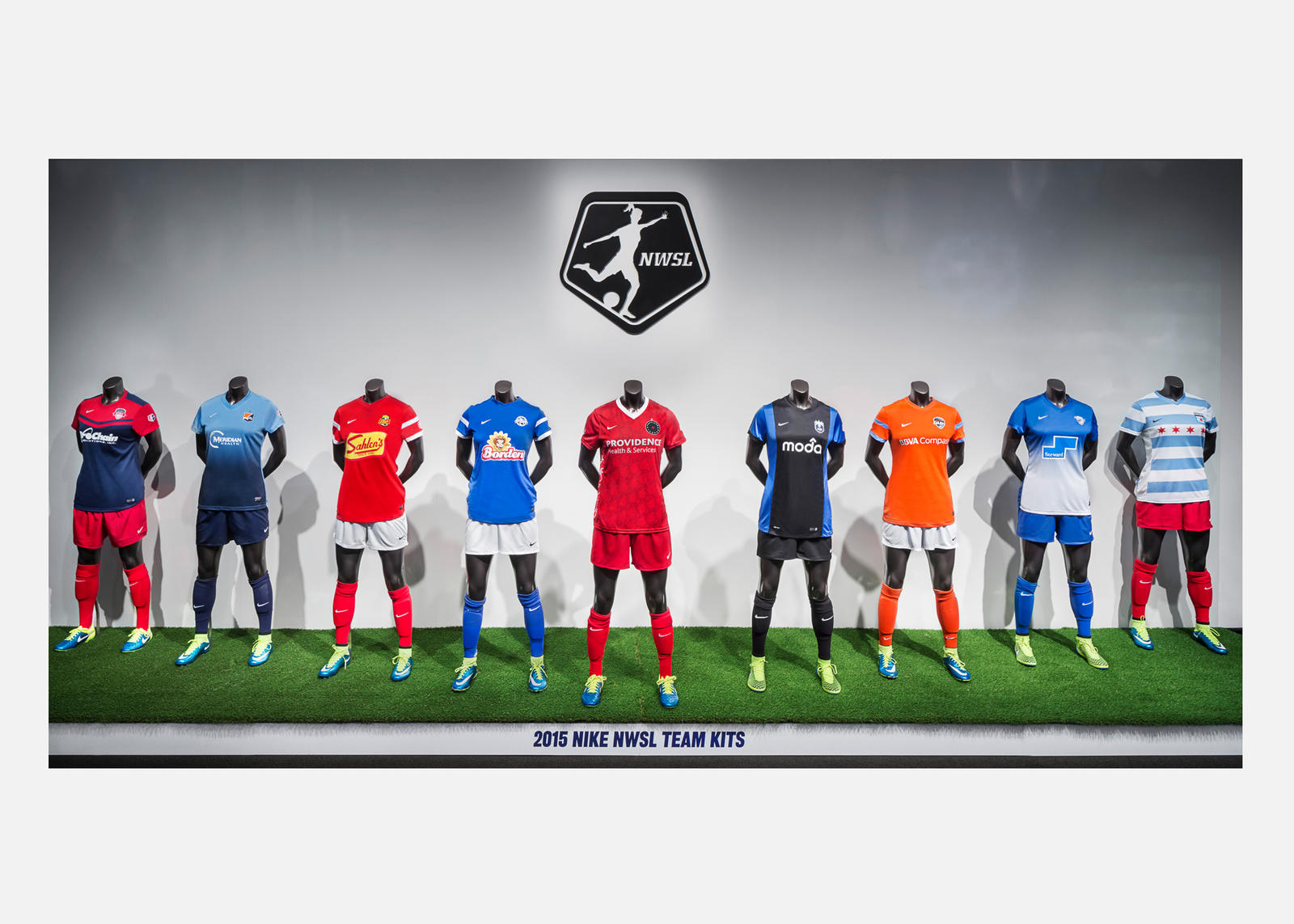 In 2012, Nike began its partnership with the National Women's Soccer League (NWSL) to be the league’s official uniform provider for all nine NWSL clubs. 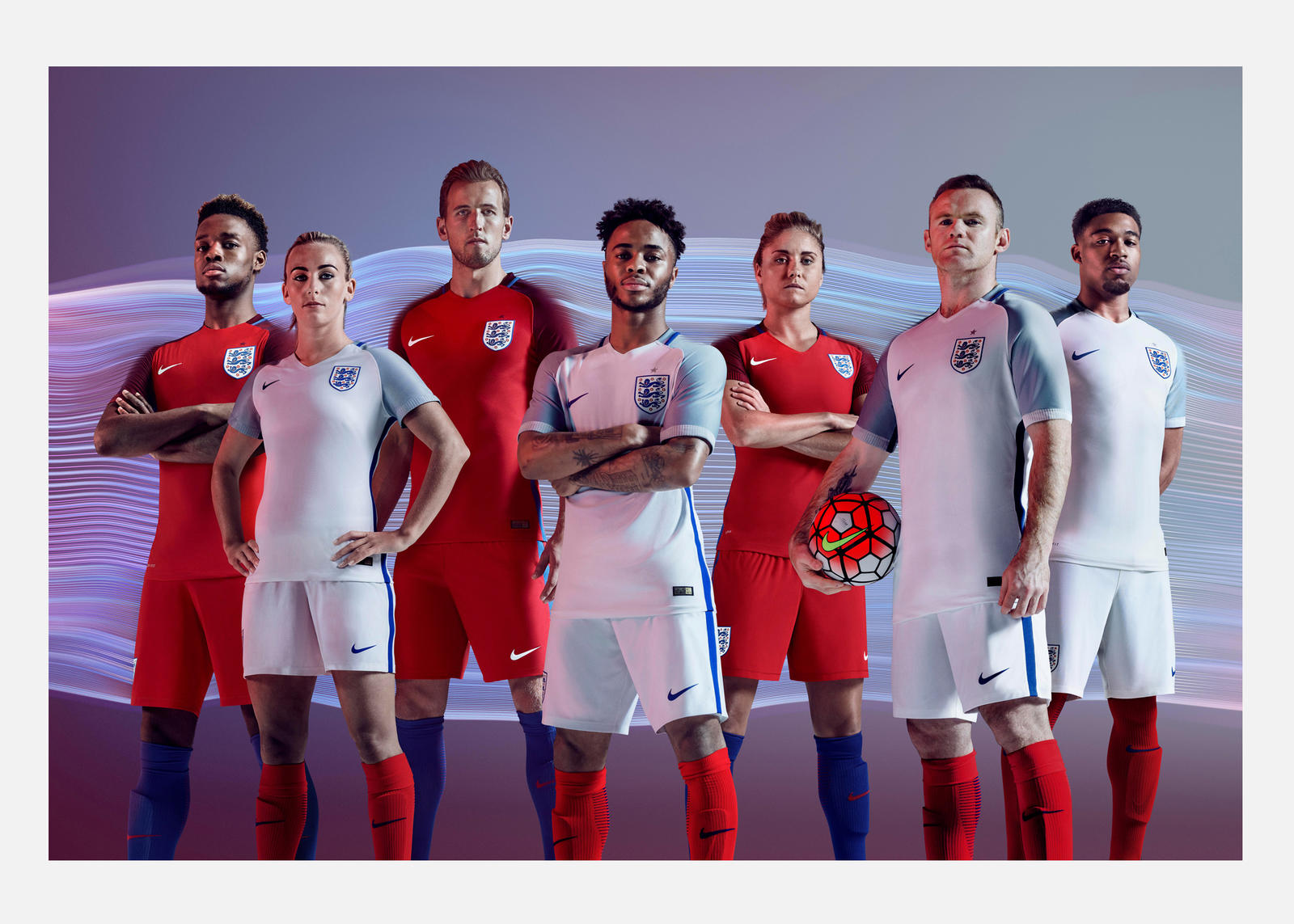 England 2016 Home and Away Kit 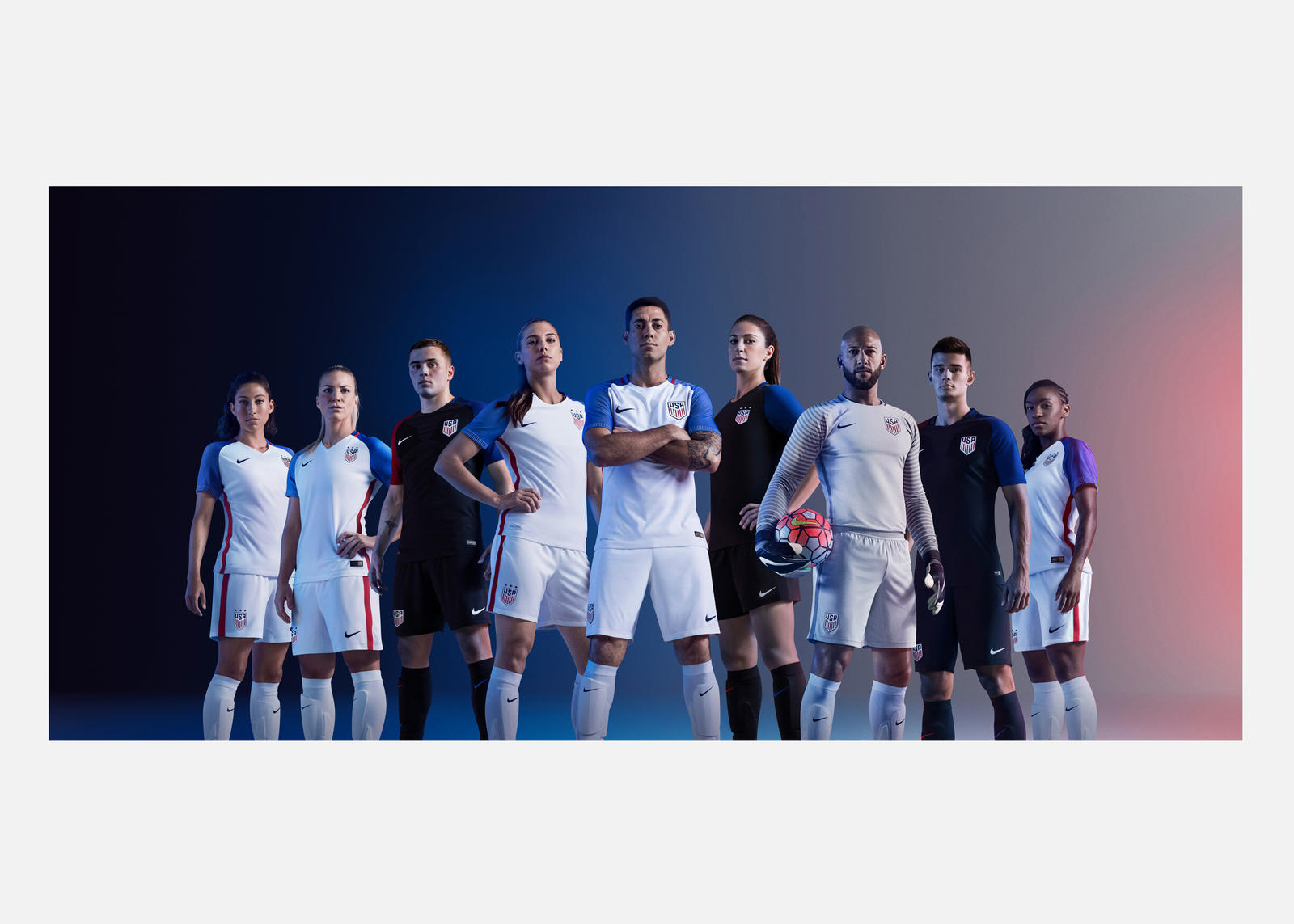 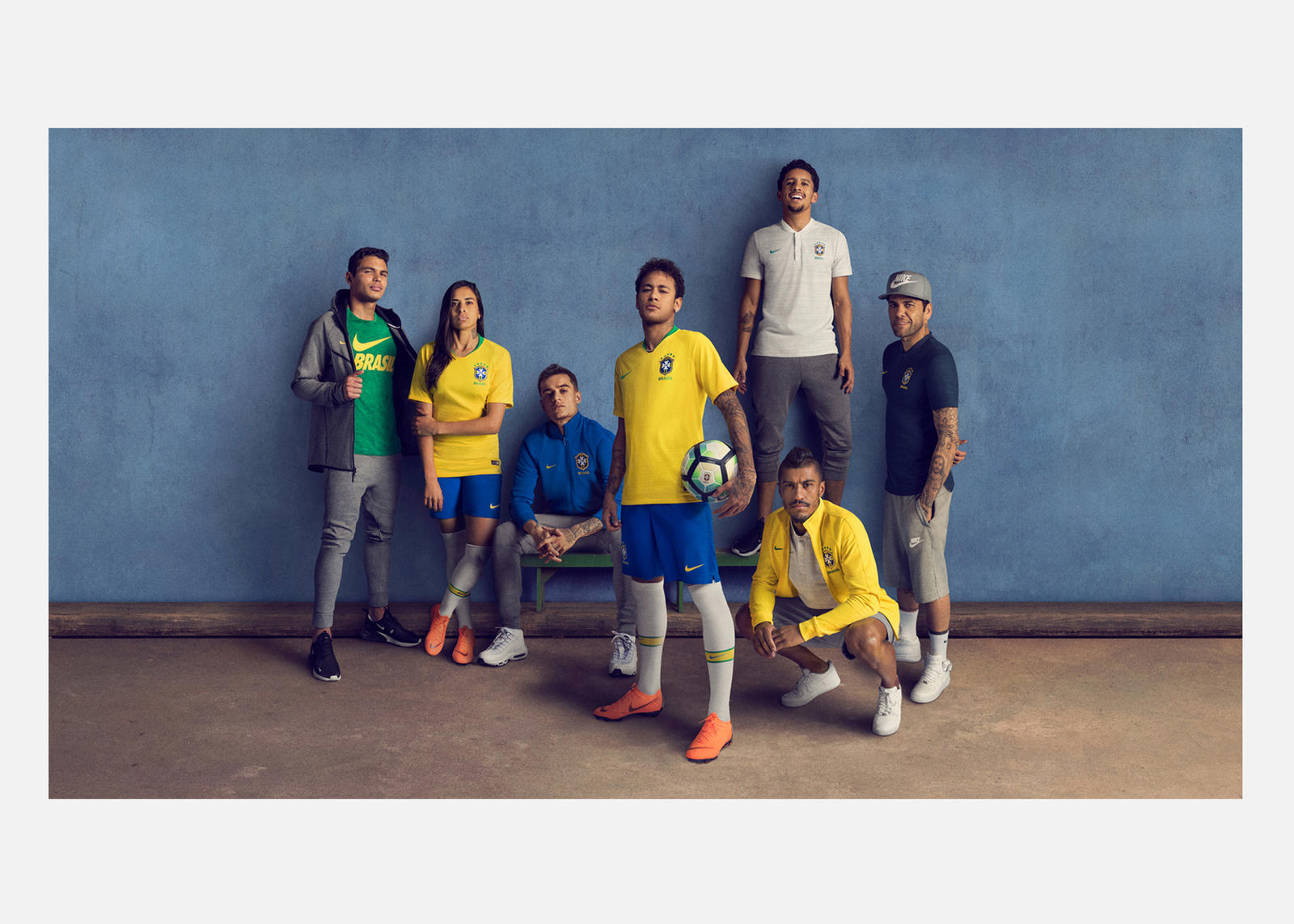 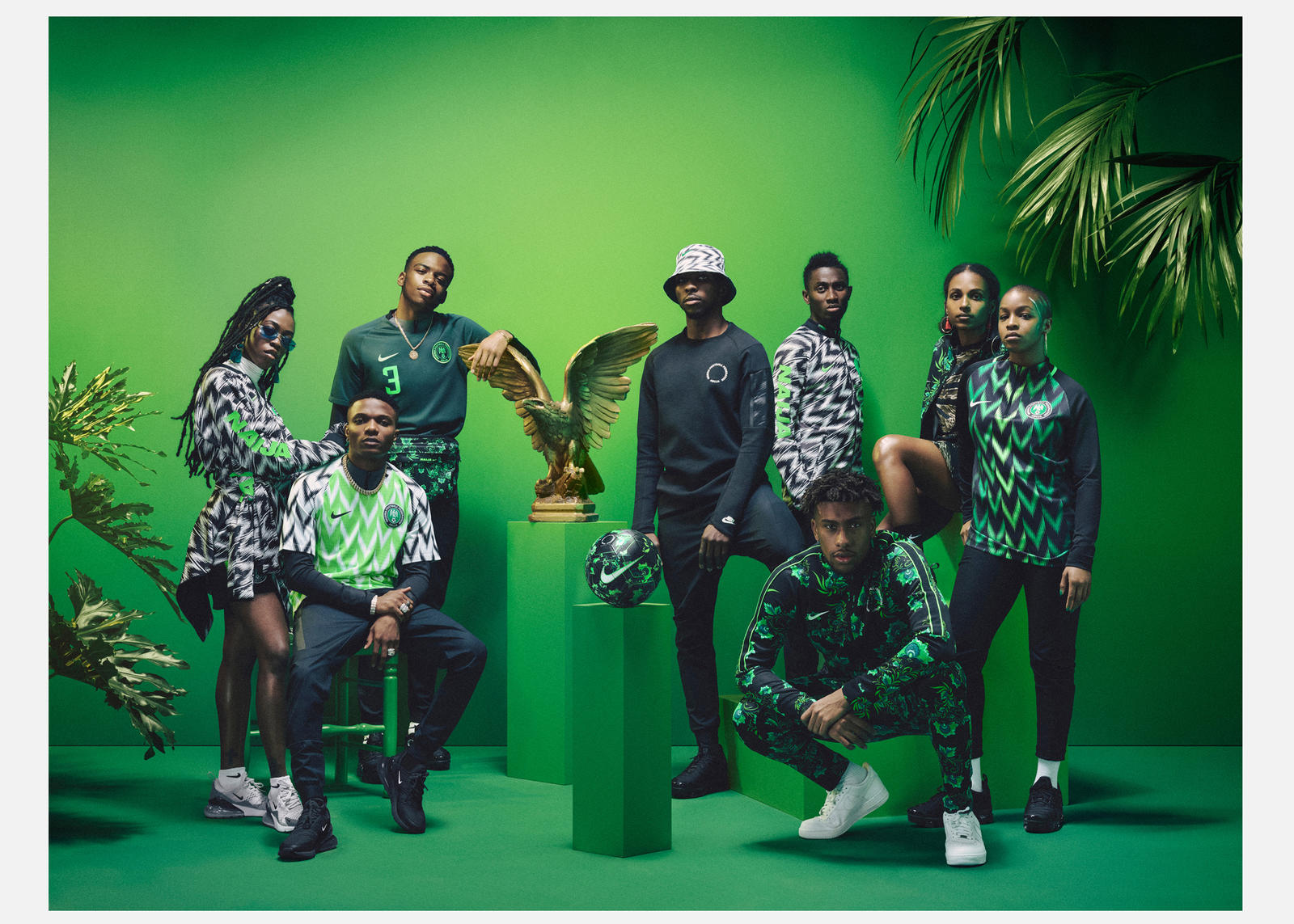 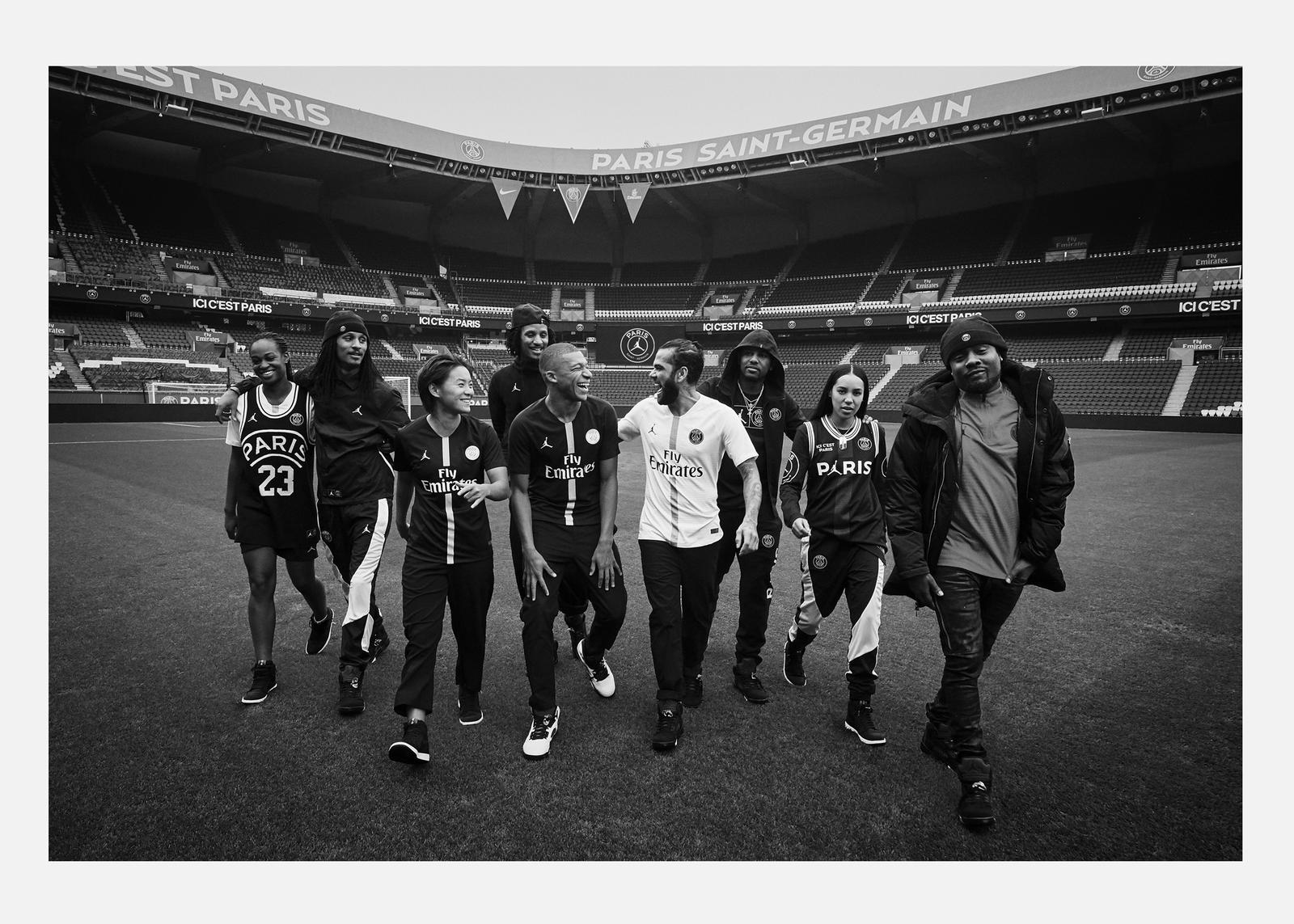 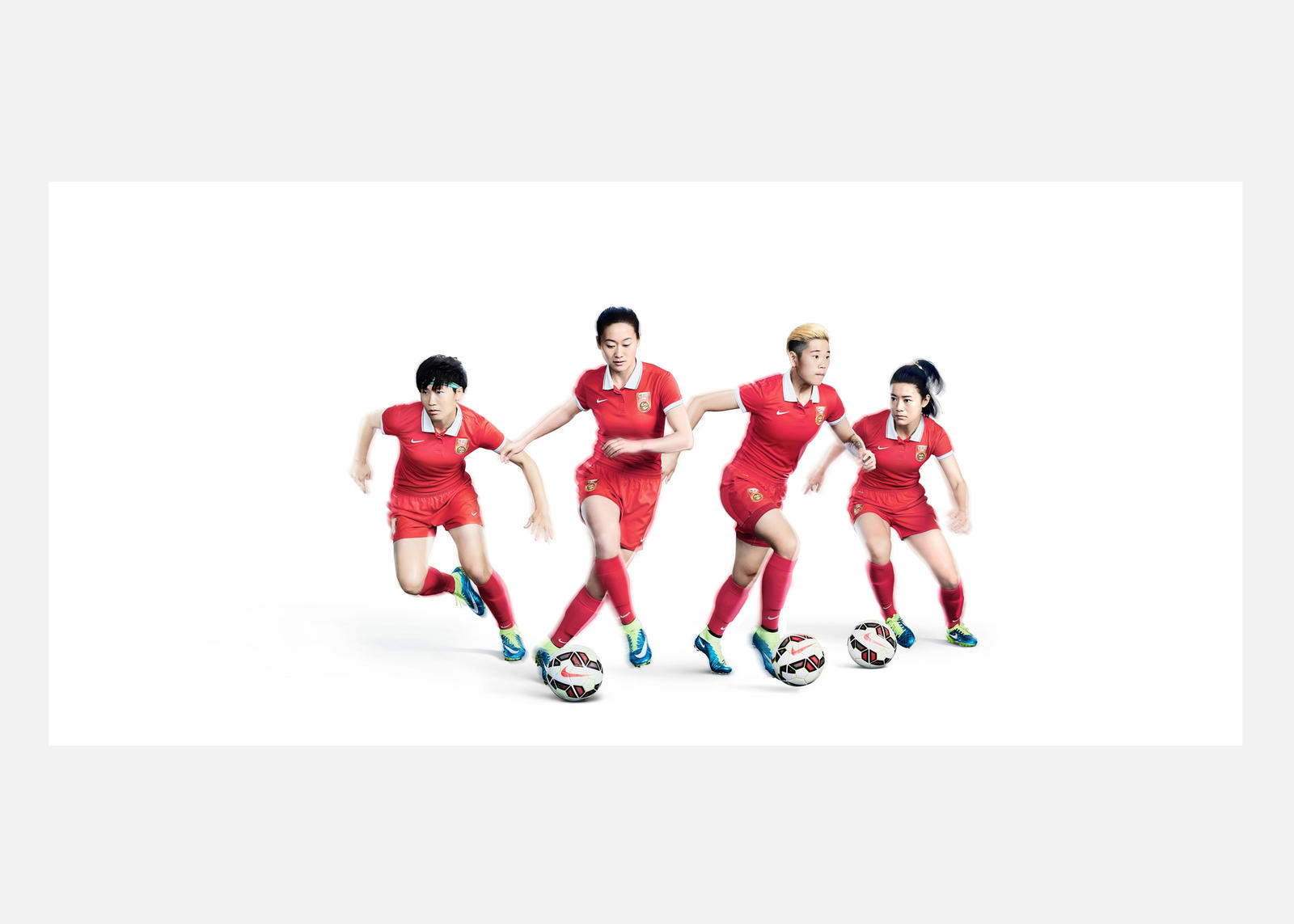 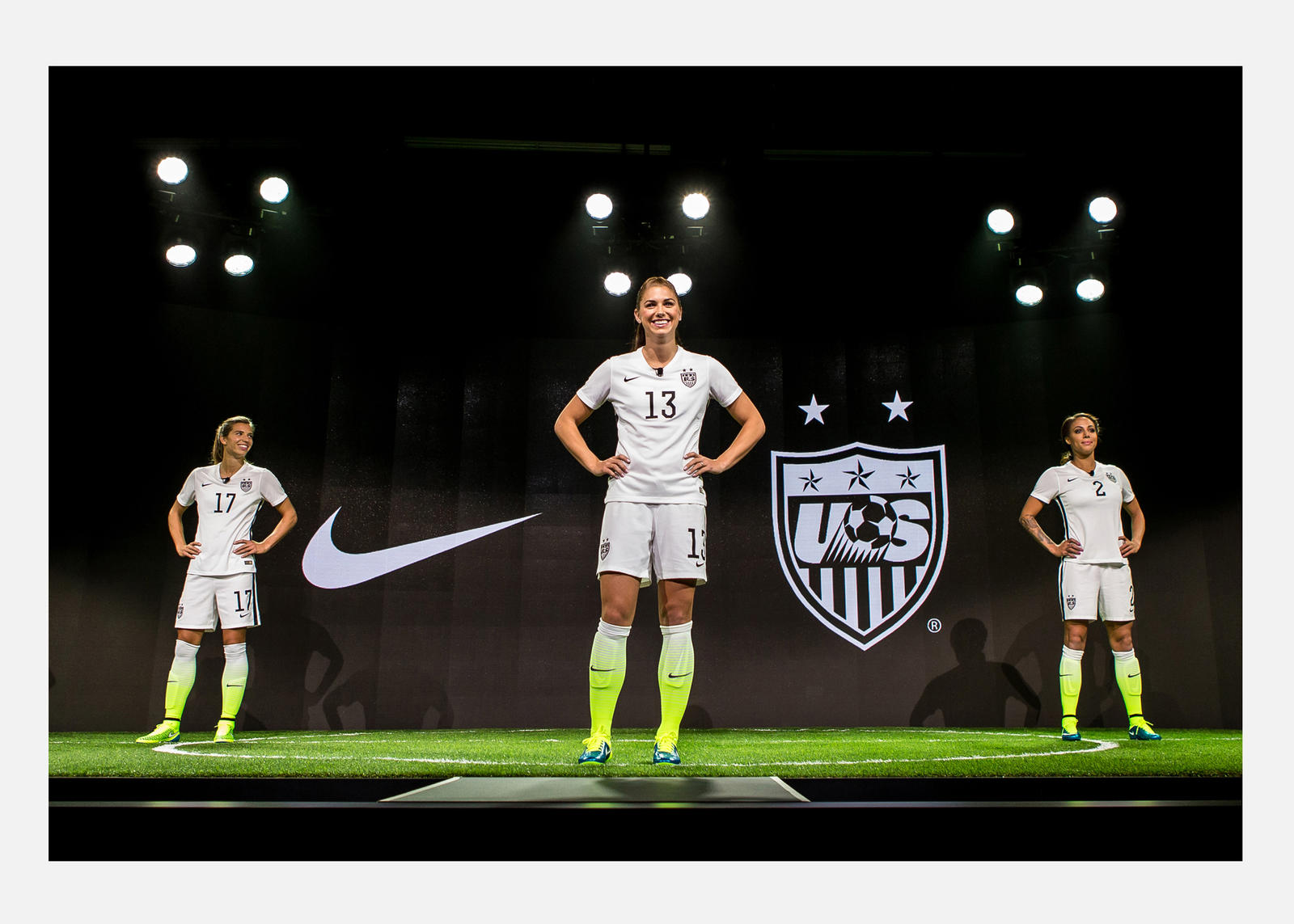 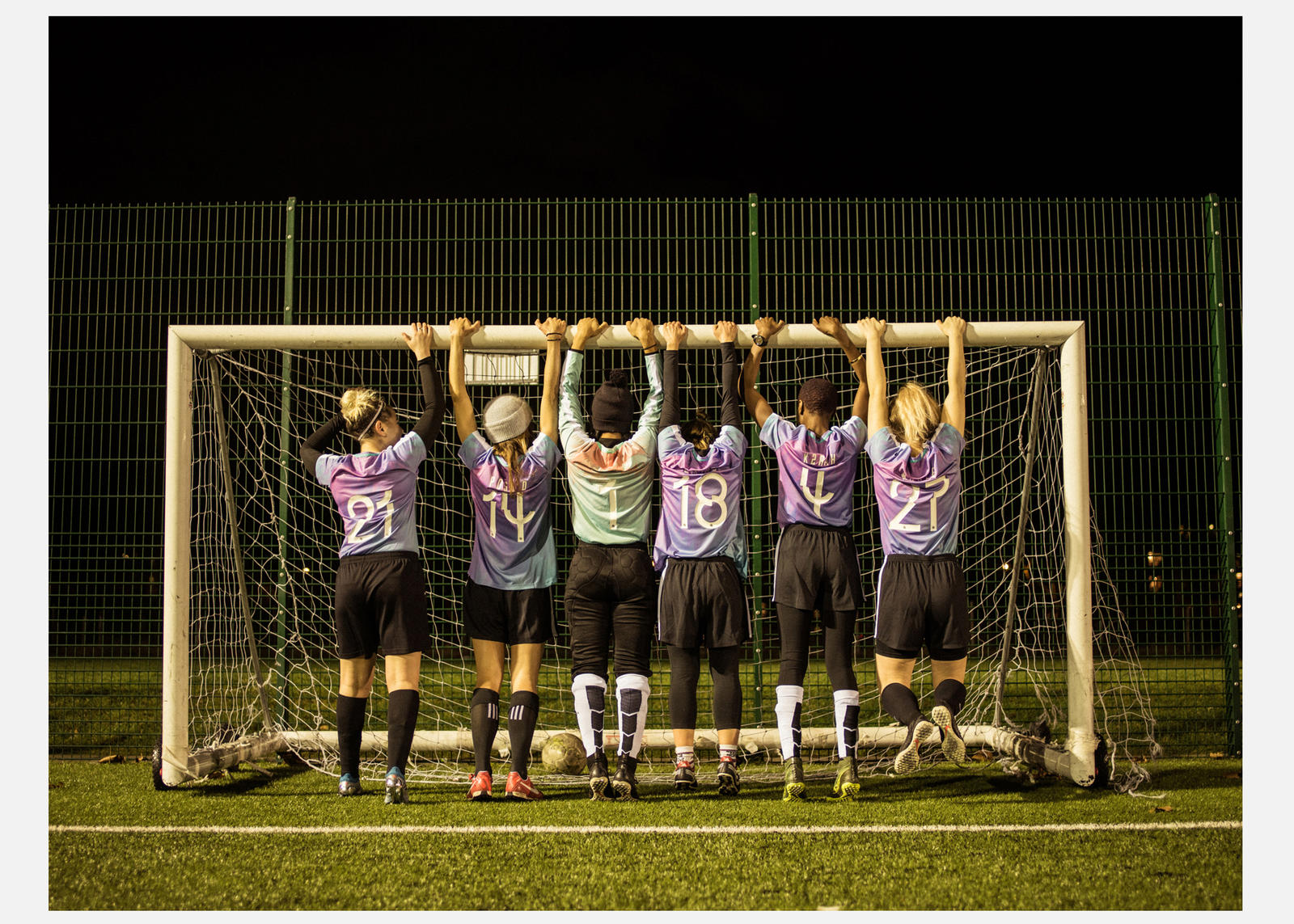 The Romance FC jersey was inspired by football kits of the ’80s and ’90s, and designed by one of their club members. 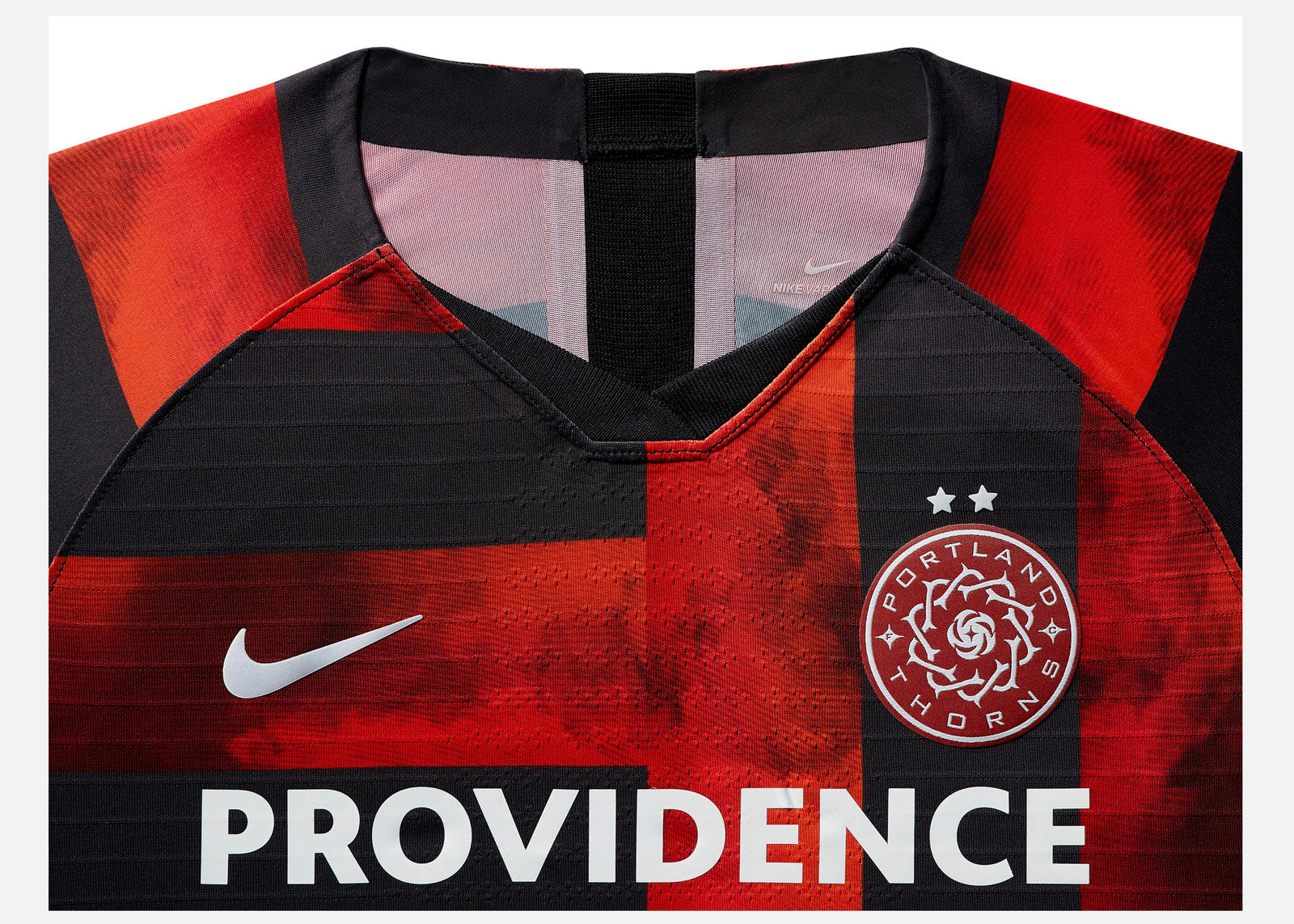 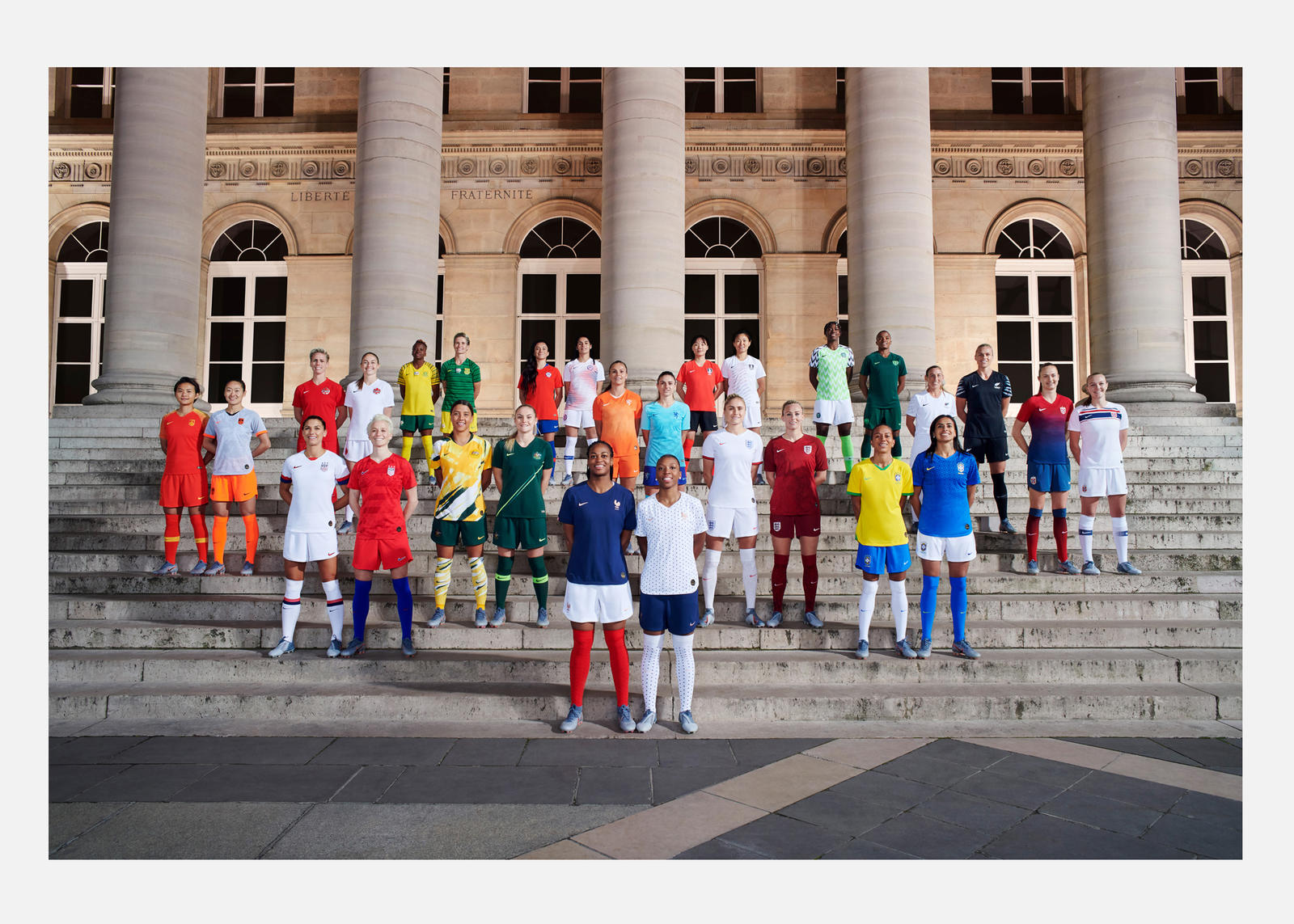 More than 40 of the world’s top female athletes united in Paris to unveil the 14 National Team Collections for 2019 summer’s football tournament in France.

Nike is the official uniform, apparel and equipment provider for many of Europe's top clubs (including FC Barcelona, Chelsea, PSG and Inter Milan) and all nine National Women's Soccer League teams in the United States. The 2019-20 Portland Thorns kit marked the first time Nike created a unique visual identity for a women’s club team from top to bottom.

Off-pitch, collaborations with creative teams, such as Romance F.C. in 2018 and a quartet of designers in 2019, have extended jersey culture for women and opened a new view to football style. 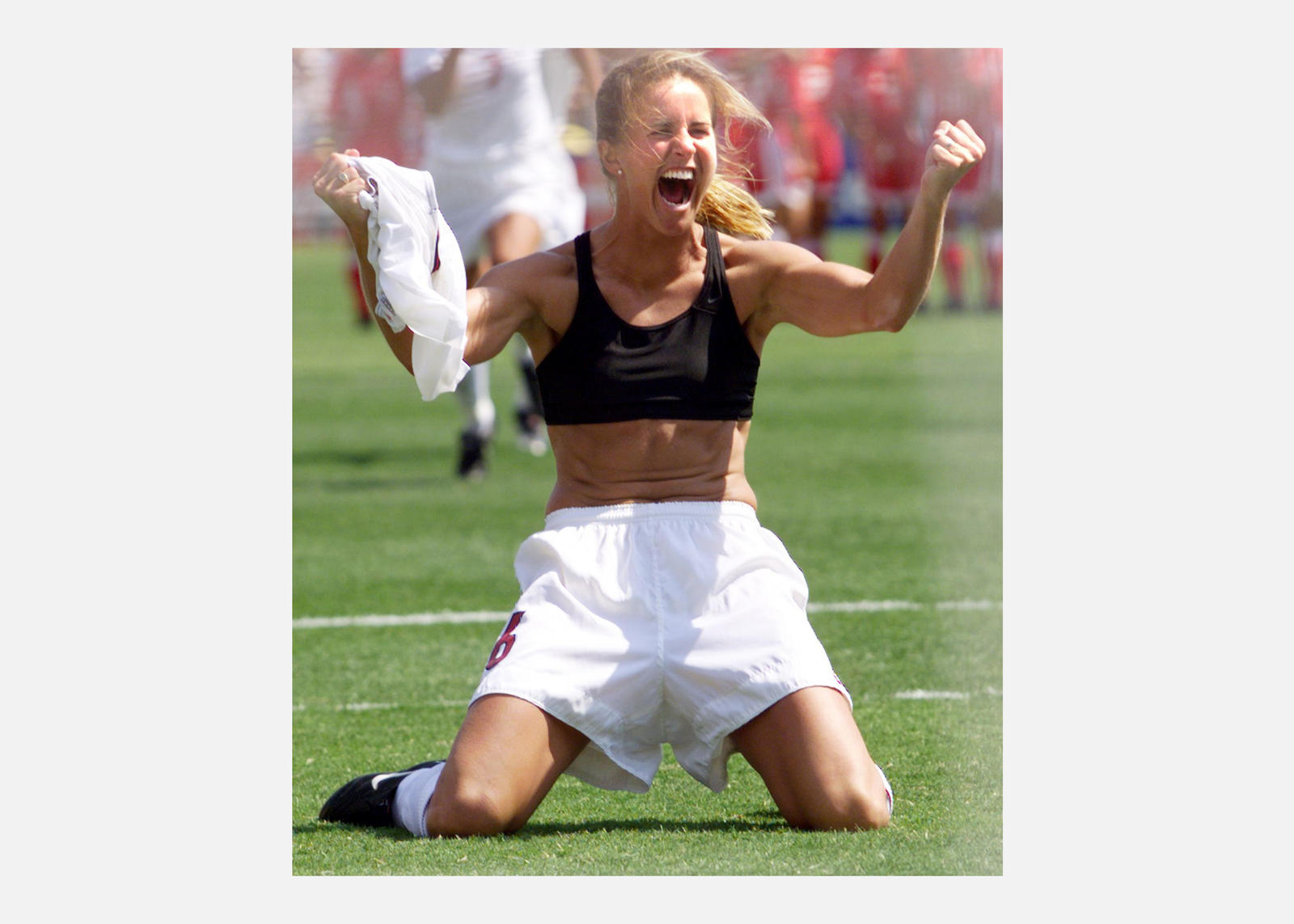 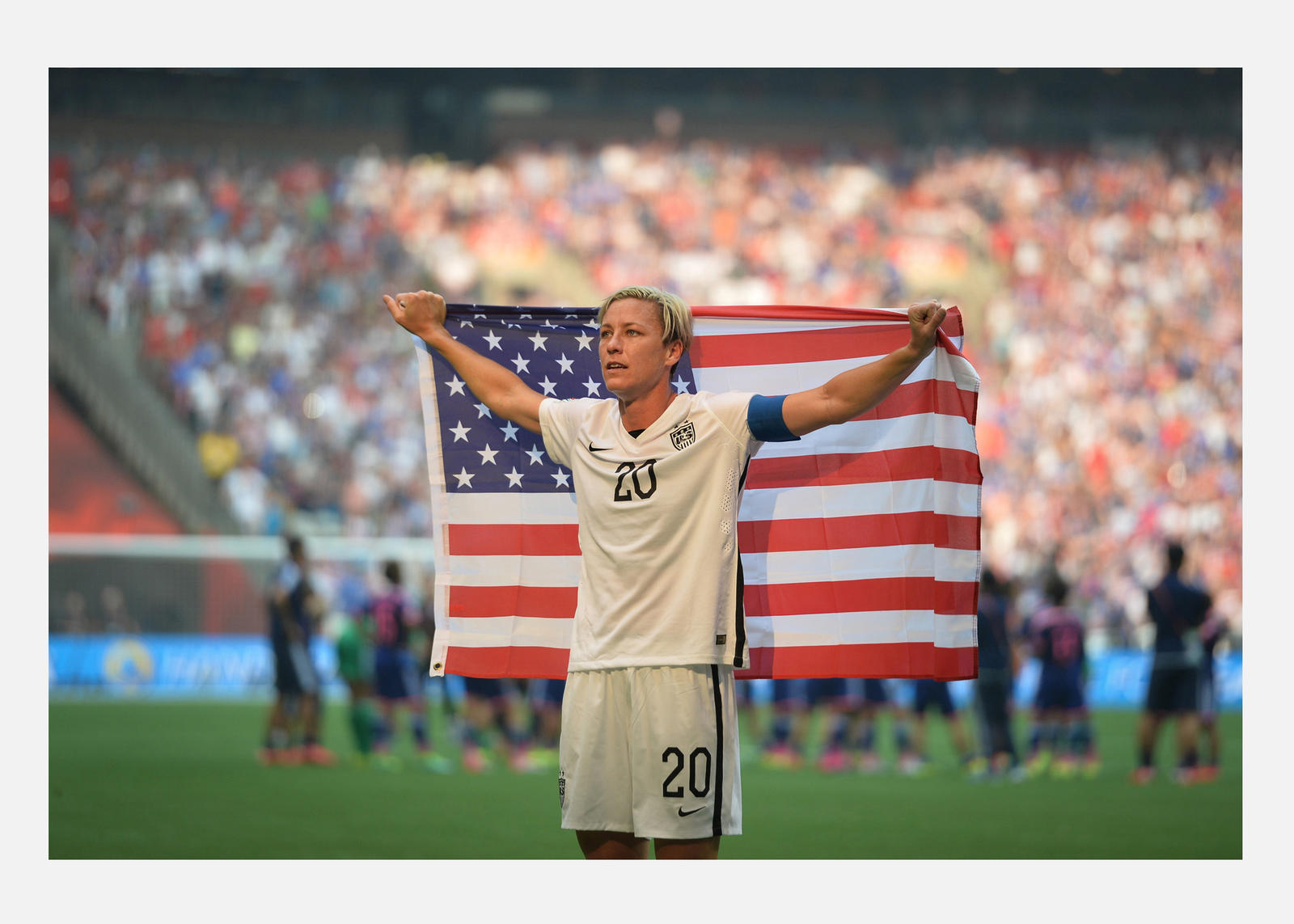 At the 2015 U.S. Women’s National Team championship, Nike launched a limited T-shirt collection featuring a third star on the crest, representing USWNT wins in 1991, 1999 and 2015.

In celebration of Abby Wambach’s last match in December 2015, Nike commemorated her record-breaking career as a member of the USWNT, where she capped 253 international matches, scored 184 goals, collected two gold medals and won one world championship. 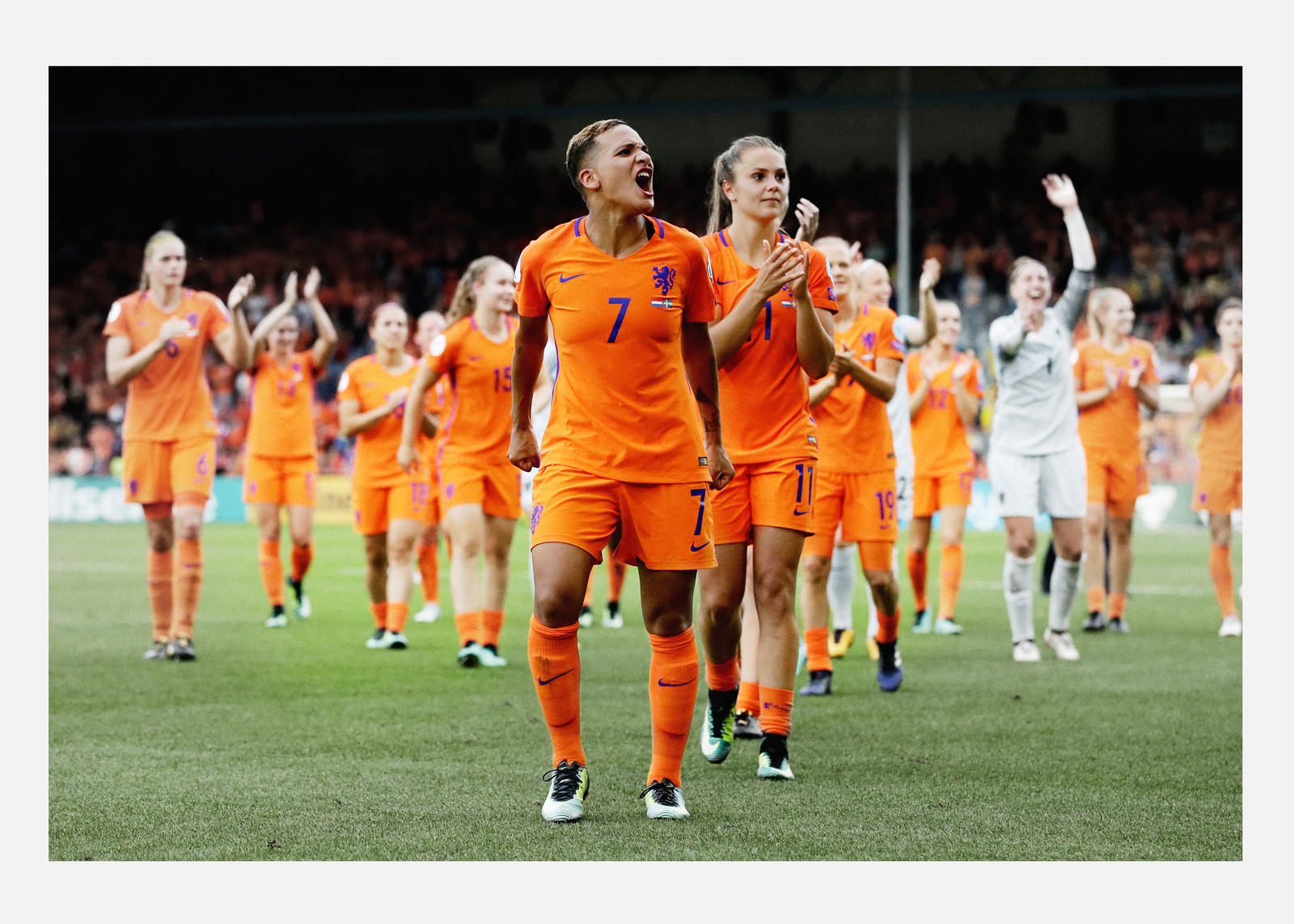 The 2017 Netherlands National Team reveal a new crest: the traditional lion was replaced by a fierce lioness. 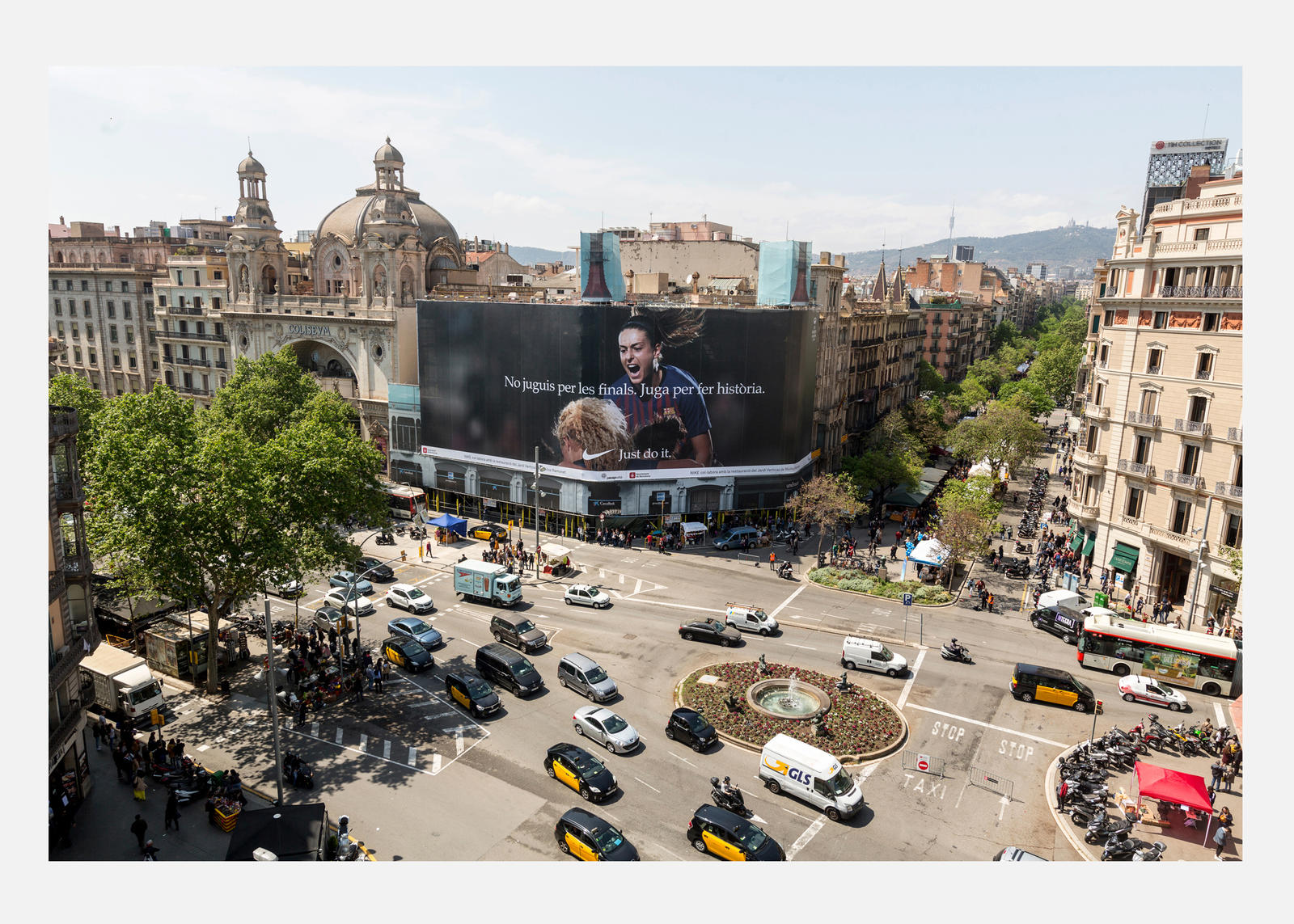 As FC Barcelona Women’s team reached the final stages of the biggest 2019 European tournament, Nike inspired its hometown and encouraged players to make history competing in their first final. 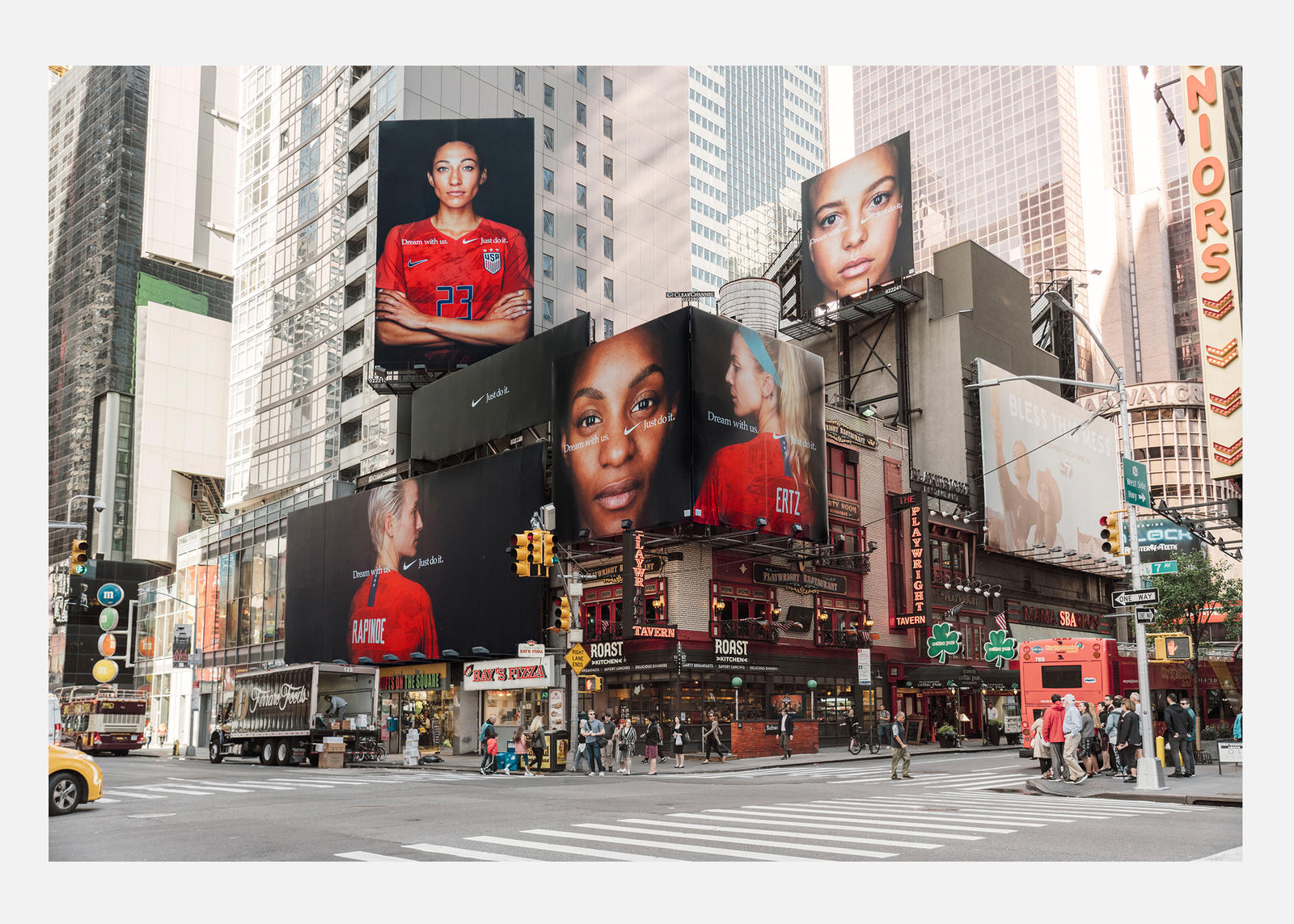 The “Dream With Us” Just Do It film features players from the USWNT and their dream to win their fourth championship star. Players are also prominently featured on digital billboards in Times Square and street murals in LA.

1996, 1999 and 2015: These are just a few of the years marking major victories achieved by the U.S. Women's National Team. Fittingly, each has been celebrated with meaningful and memorable campaigns. With the creative spirit of football as a leading light, the women's game has produced iconic strikes (Lloyd's looping half-field shot, for example) and inspiring scenes in equal number.

Before the 2017 European Championships, the Netherlands made a bold statement revealing a new KNVB identity. The Women’s National team proudly wore uniforms with a new crest: the traditional lion was replaced by a fierce lioness. Marching to glory, the team energized the nation and brought the hup back to Holland's rich football traditions.

Similarly, as FC Barcelona Women’s team reached the final stages of the 2019 European club championship, Nike inspired its hometown to rally around the players.

Nike's support of football from 1994 to 2019 is a story of growth. Once again, it is the story from one to many. This summer in France, Nike players and the federations will galvanize the next generation to Dream Further.