Nike Puts Women Front and Center for 40 Years and Counting

This month, Nike launched #betterforit, which will run through 2015 as a long-term commitment of motivating women to be active, take on new challenges and conquer personal goals. This most recent rallying cry is the latest extension of how Nike has elevated and engaged female athletes in meaningful ways over decades. 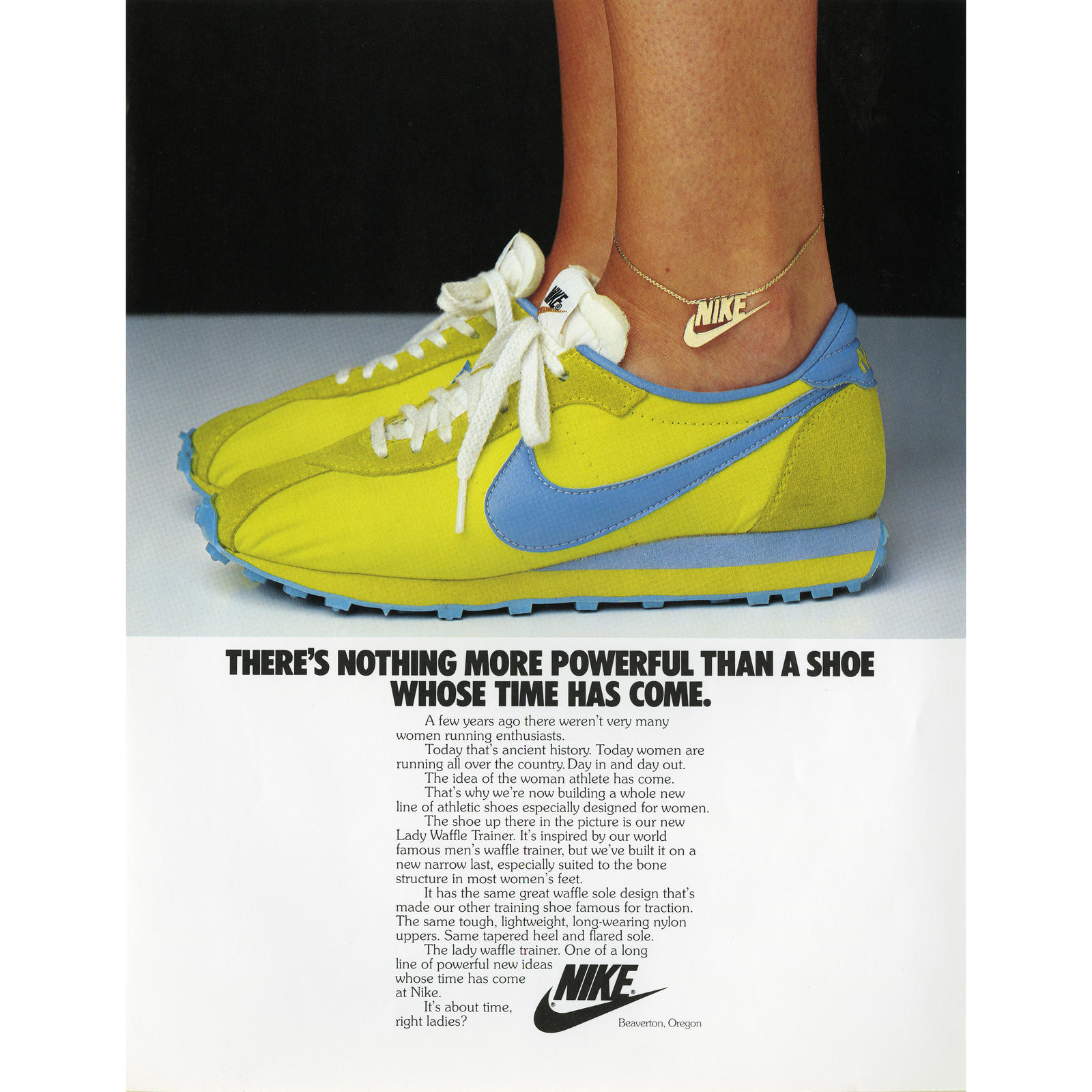 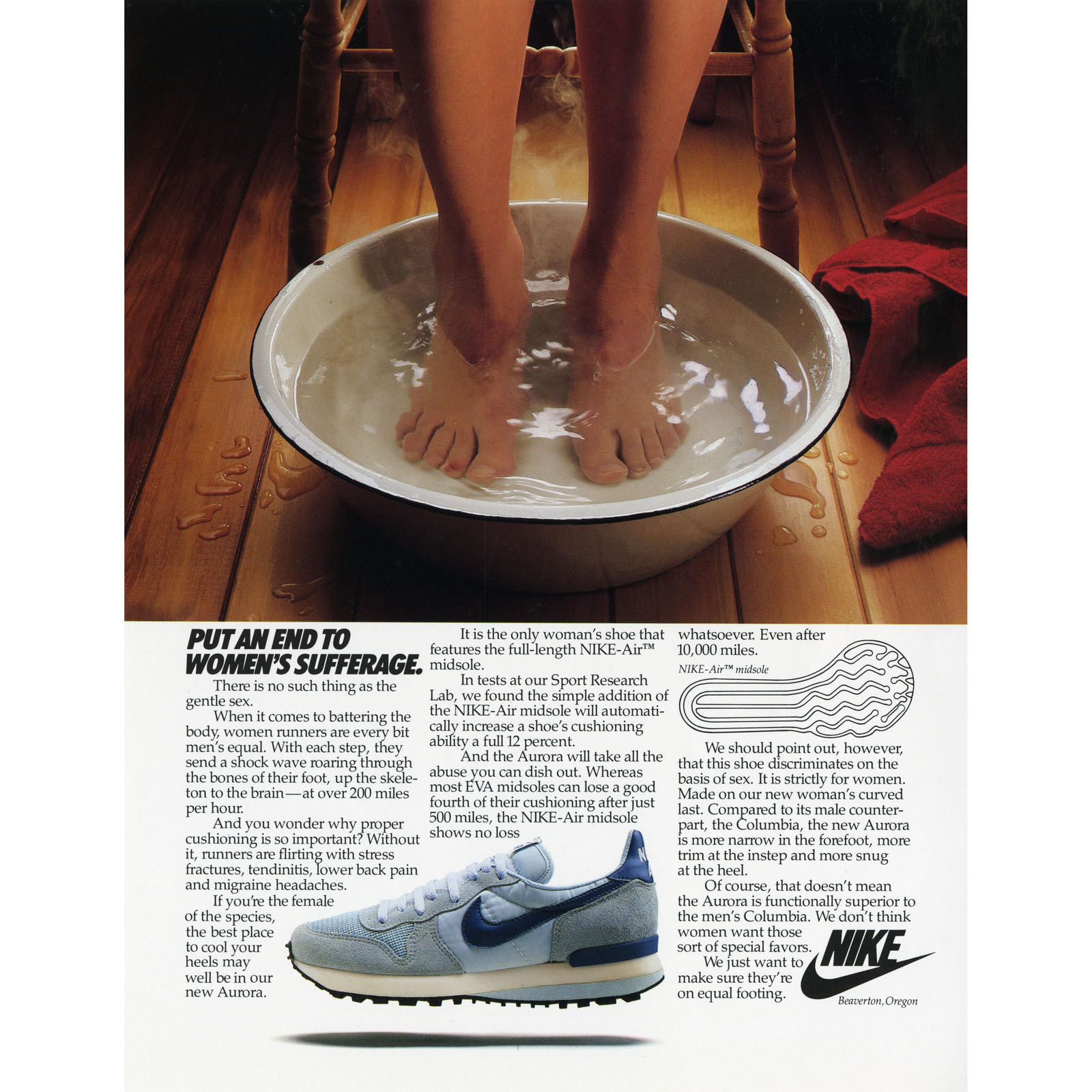 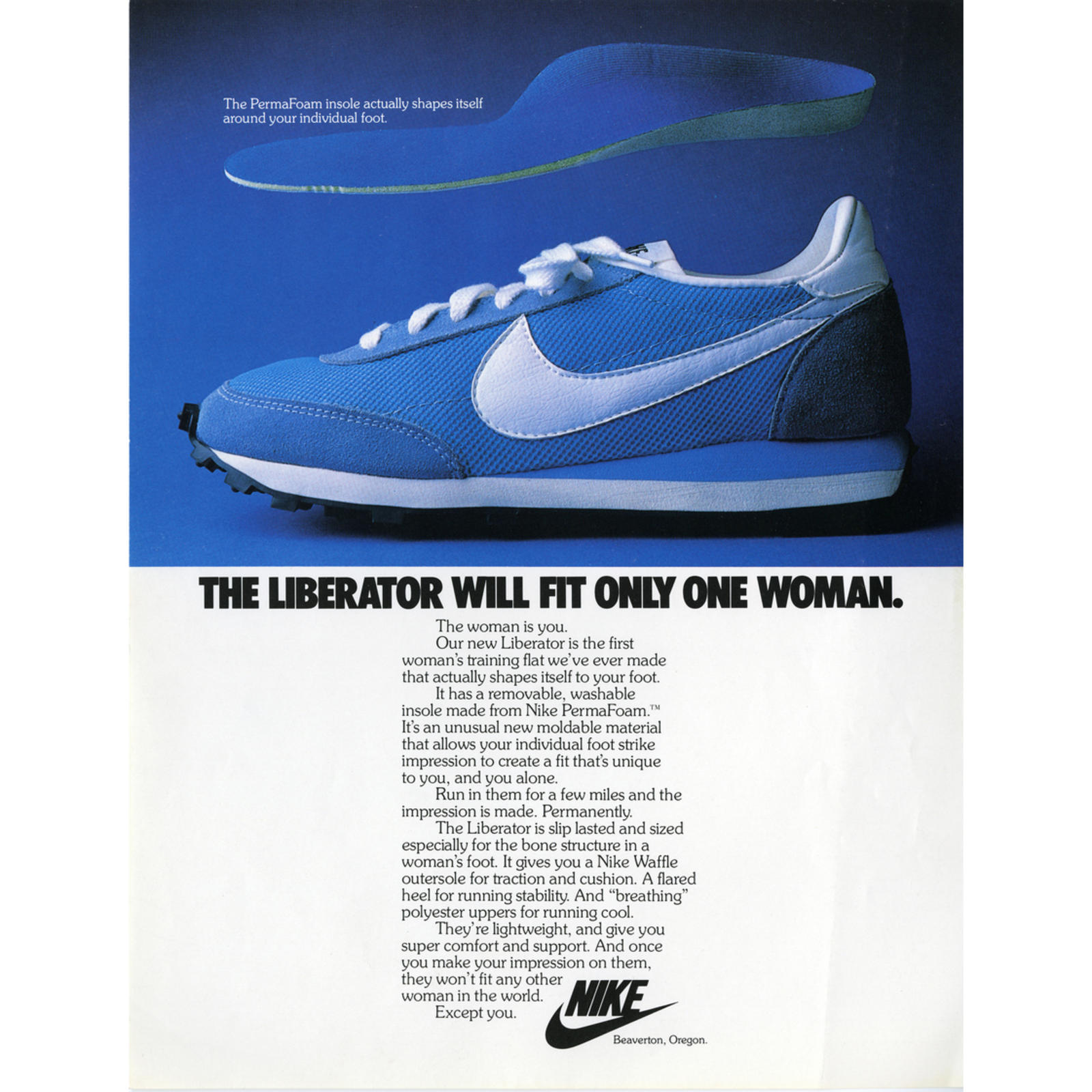 The United States Congress passed Title IX in the Education Amendments of 1972 — a landmark bill that enforced gender equity in high school and collegiate sports once and for all. Less than a week later, the U.S. Olympic Track and Field Trials started in Eugene, Ore., and a handful of former University of Oregon runners created T-shirts and gave away free shoes that featured an unusual new brand that looked like a check mark. Their tiny company was called Blue Ribbon Sports. The shoes were called Nike, named after the Greek Goddess of Victory.

Nike ran a series of ads featuring women on the back cover of Runner’s World. In 1978, Nike Women launched as a business focus, and Nike debuted its first ad featuring the Lady Waffle Trainer, part of a line designed specifically for women.

In 1979, a group of female runners banded together to create the International Runners Committee (IRC) to fight for the inclusion of long-distance running. Nike was an enthusiastic partner of the IRC, eagerly providing funding and exposure to help push women’s running to new levels of acceptance. 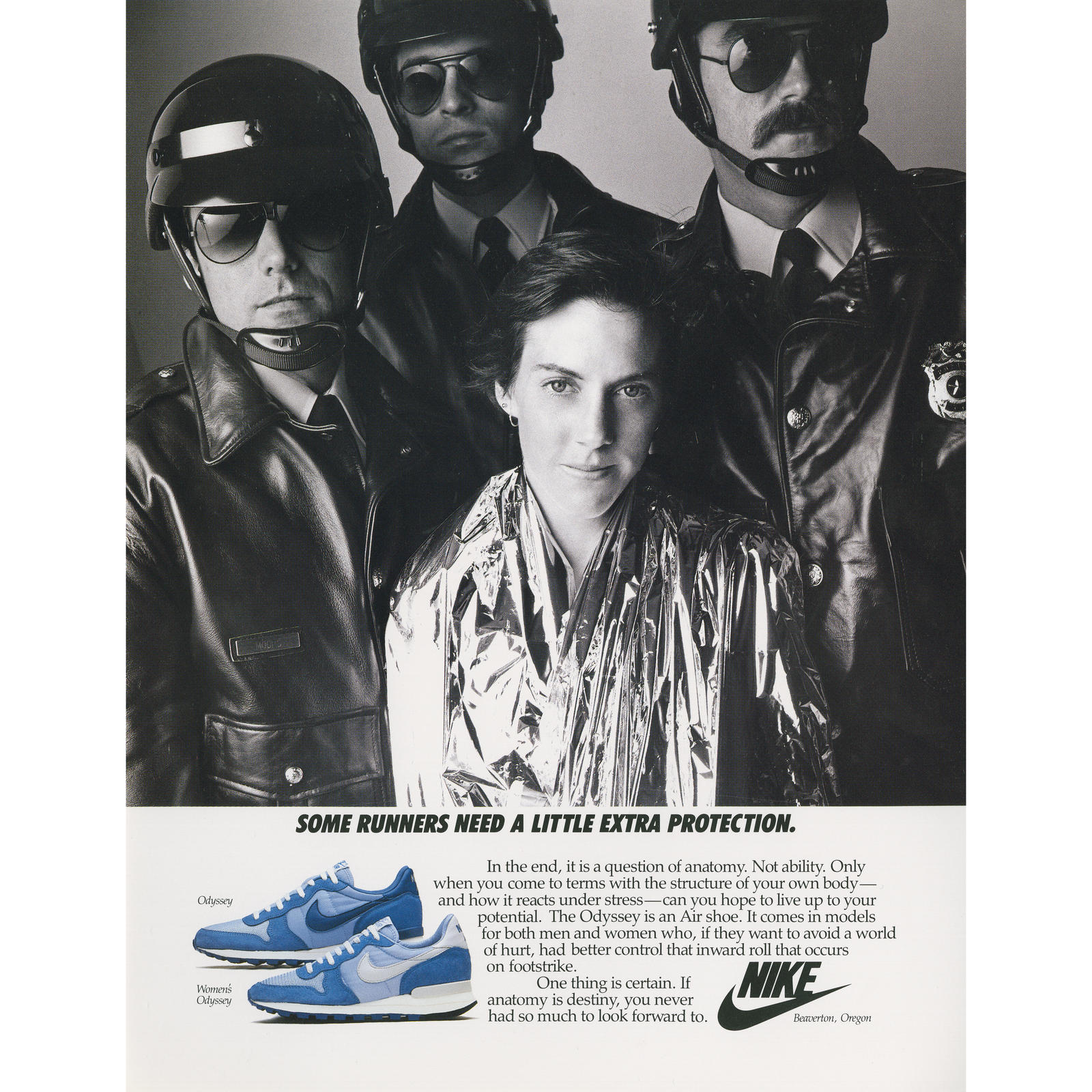 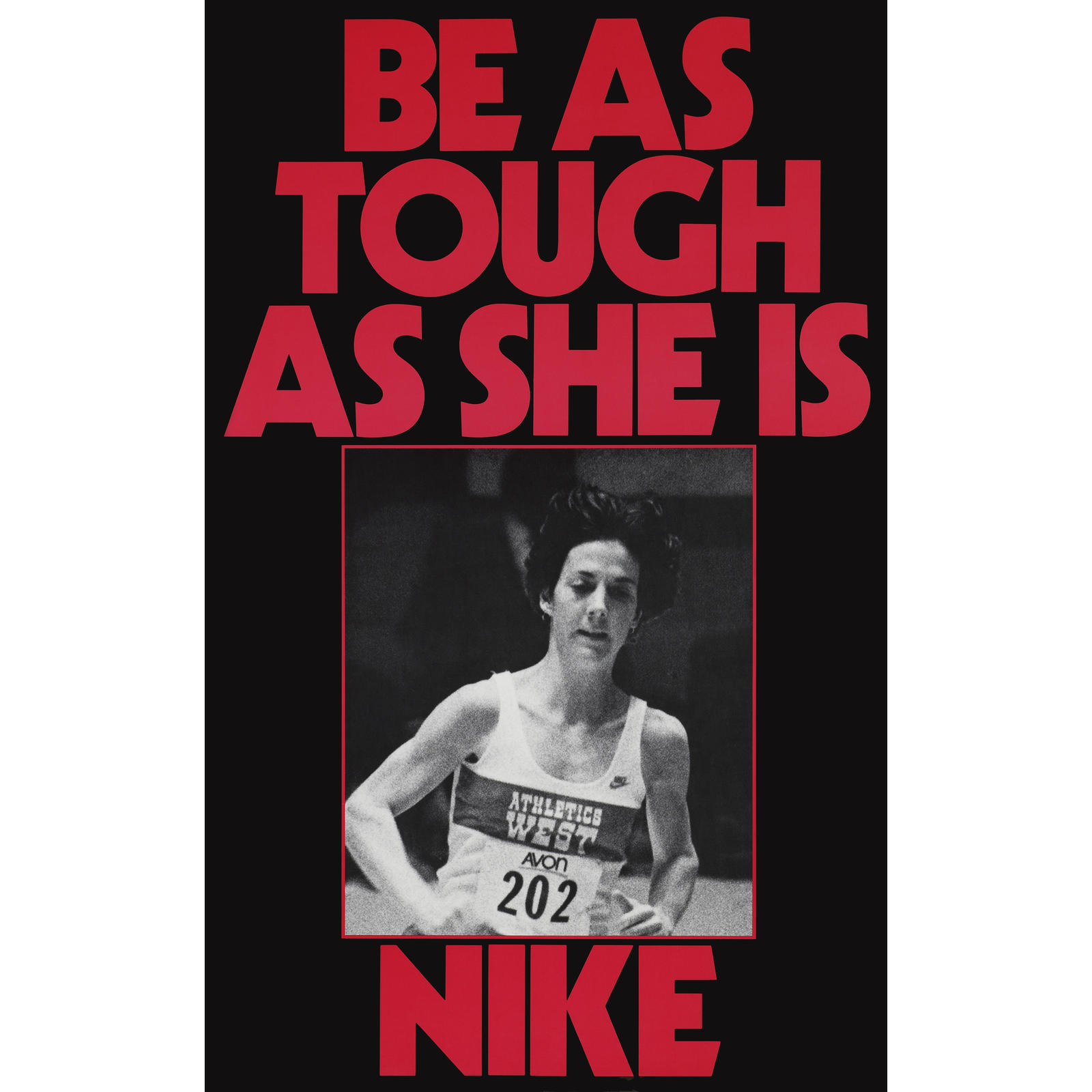 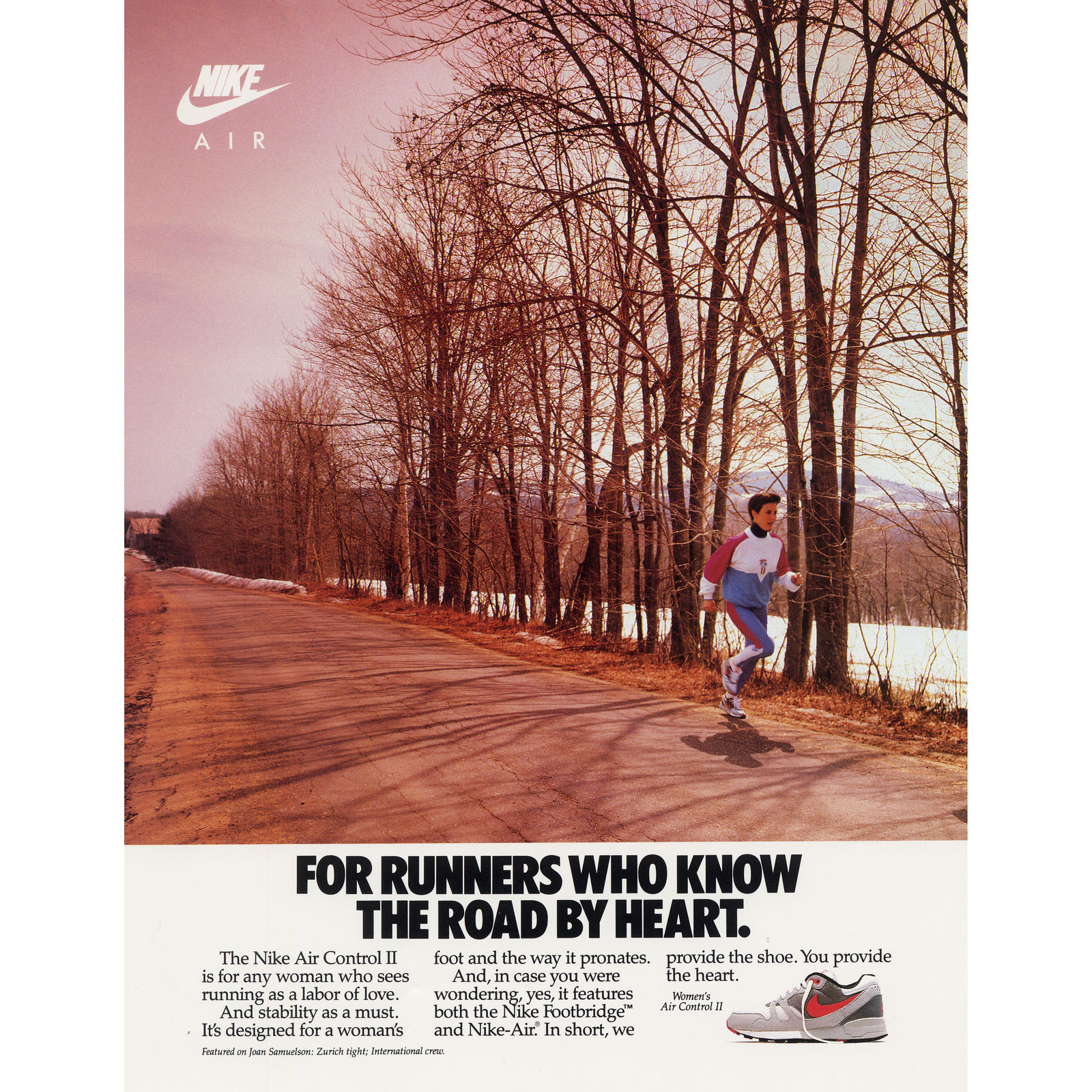 Until the early 1980s, the longest distance a woman could run in the Olympic Games was 1,500 meters, due to the long-held belief that women weren’t physically capable of handling longer runs.

In 1981, the International Olympic Committee voted to include the women’s 3000m and marathon in the 1984 Games, ignoring the statute that mandated waiting four years before implementing new sports. Nike celebrated with a pair of ads. One rejoiced, “The Olympics Will Never Be the Same.” The second was featured on the back cover of the program for the Women’s Olympic Marathon Trials in Olympia, Wash. The ad was short and packed with emotion: “Finally!”

In the summer of 1984, Joan Benoit Samuelson made history when she won the first women’s marathon at the Games in Los Angeles and helped ignite a running movement, which Nike celebrated in print ads after her groundbreaking victory. 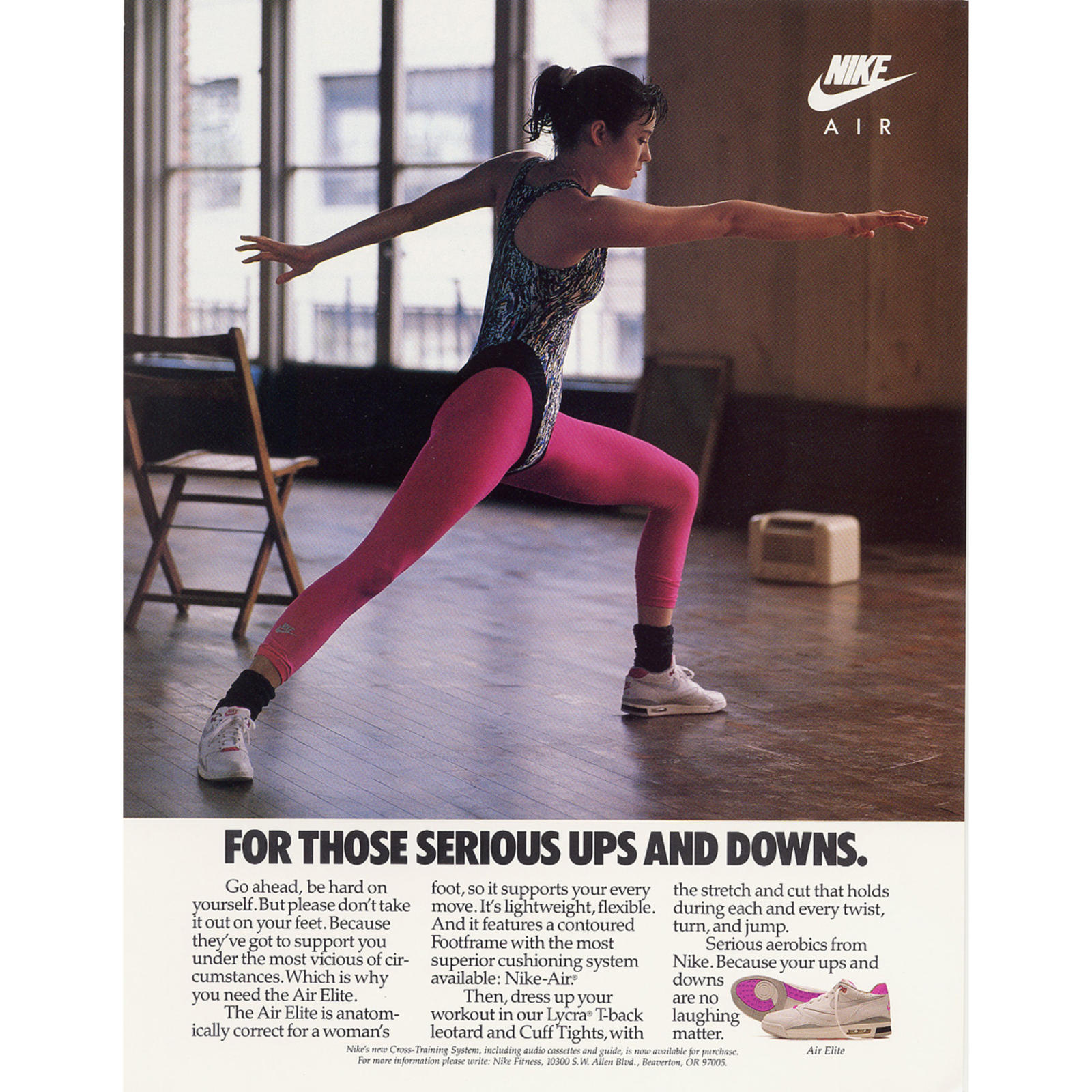 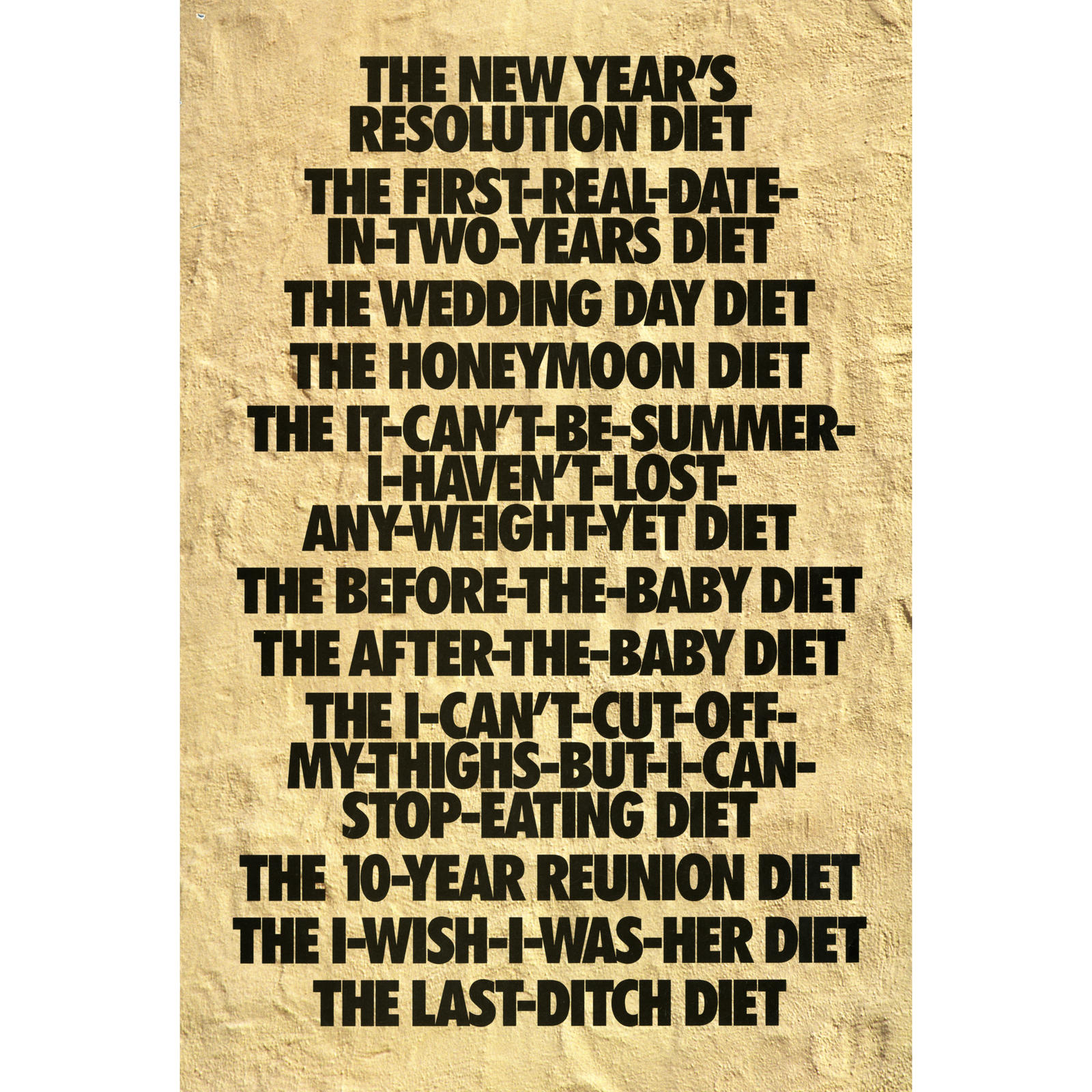 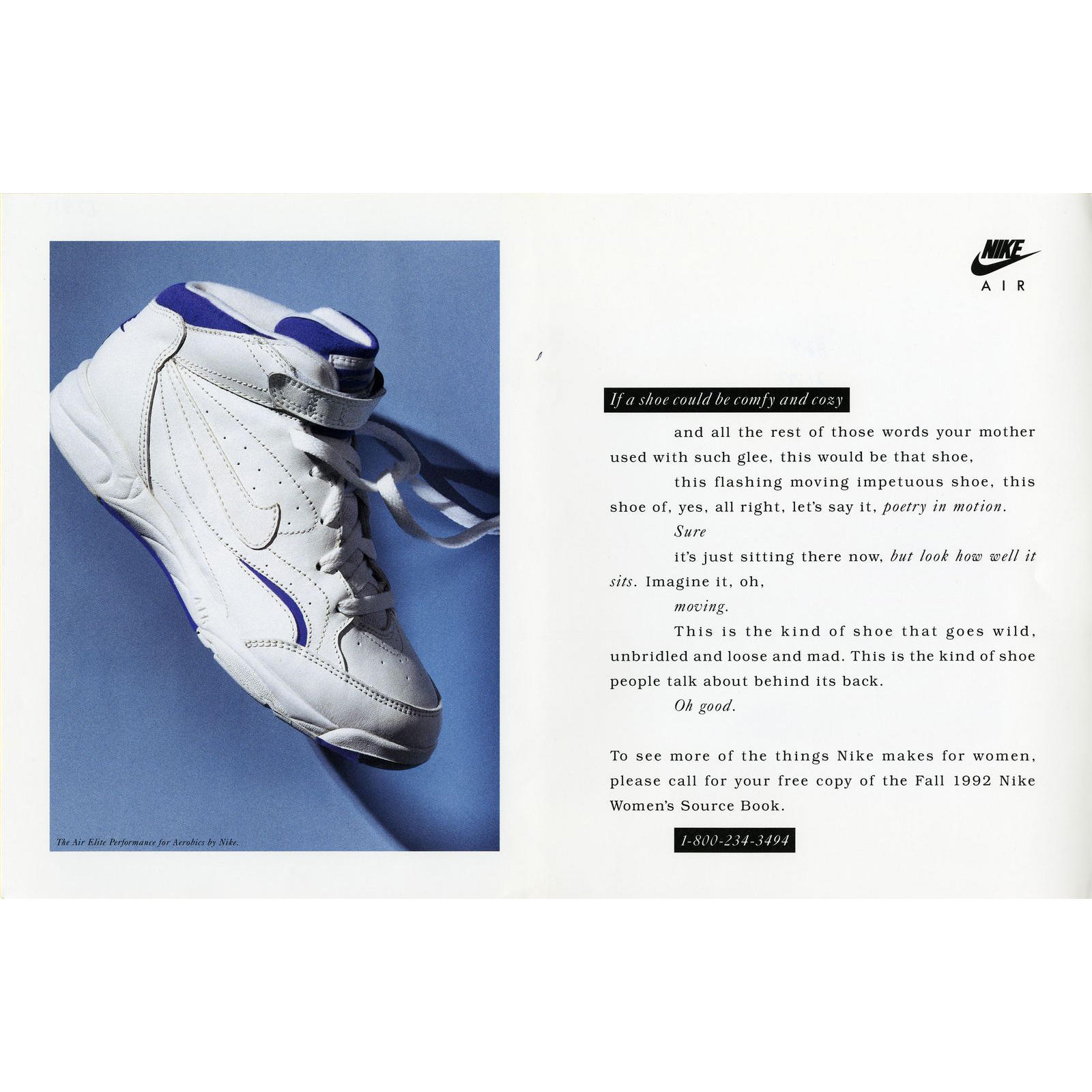 In the late 1980s, women in large numbers grew more connected to sport and adopted a lifestyle of fitness. Nike began to address the everyday female athlete, creating a greater range of women’s footwear and apparel.

Nike released a print campaign dubbed the “List” series in 1990. The ads listed numerous pressures put upon modern women and made a statement.

In 1991, Nike released an eight-page print magazine insert that started with the words, “You Were Born a Daughter,” and took the reader through the growth and development of a woman’s life. 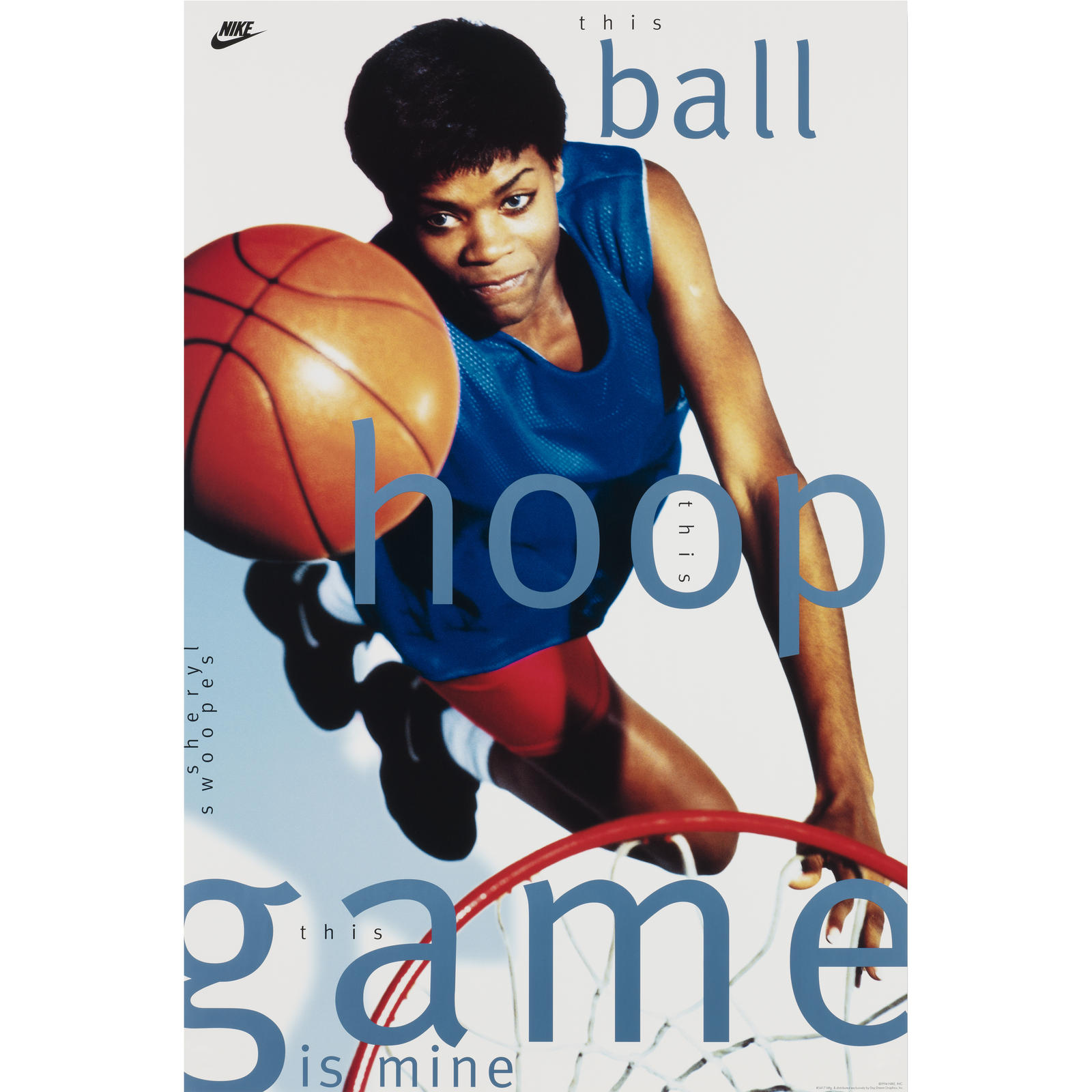 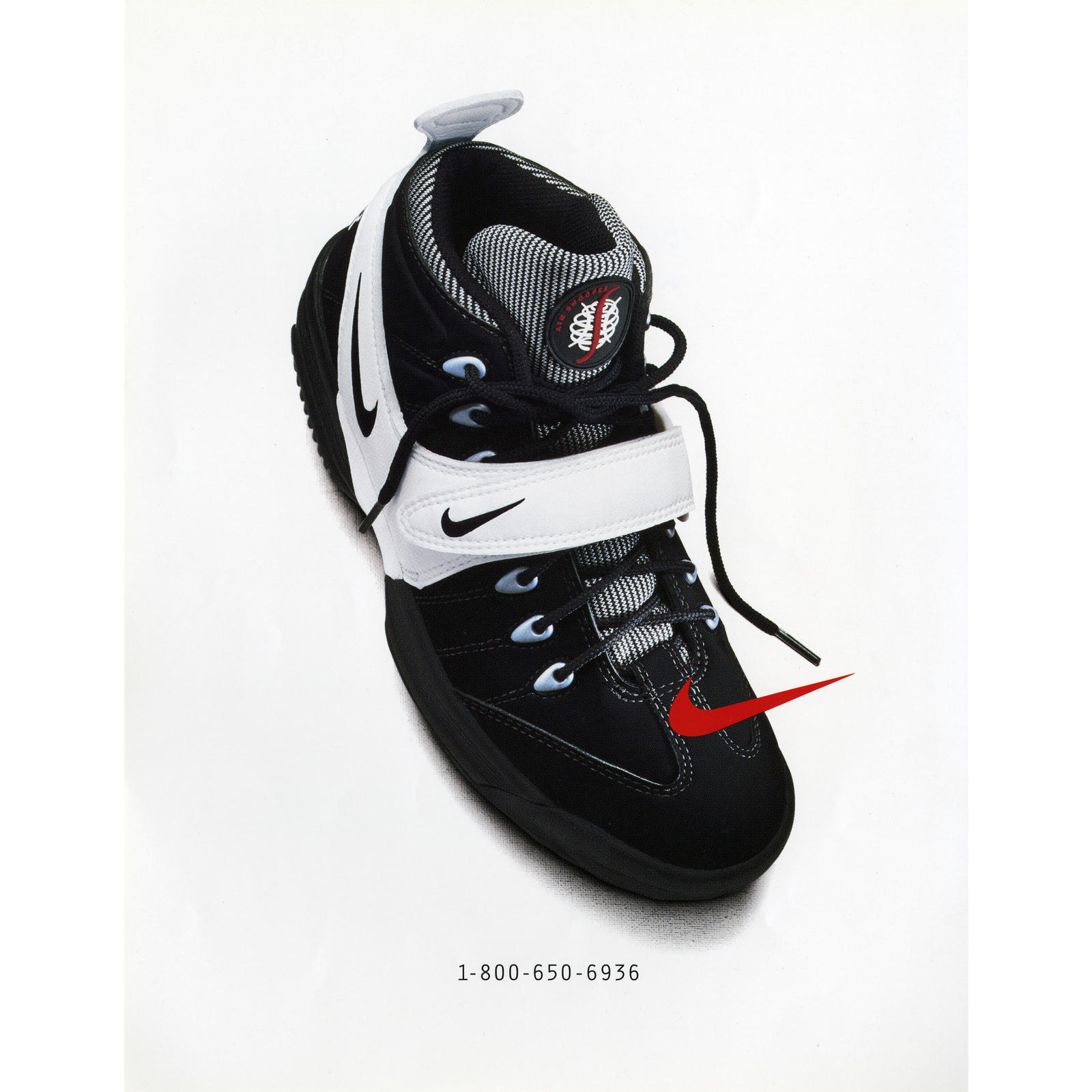 A collegiate and Olympic champion, Sheryl Swoopes added to her legacy in women’s professional basketball by leading the Houston Comets to the very first WNBA Championship and went on to garner three MVP honors in her 12-year career.

In October of 1995, Swoopes became only the second athlete, male or female, to have a shoe bear her name. Sheryl was in good company, as the first was none other than Michael Jordan. 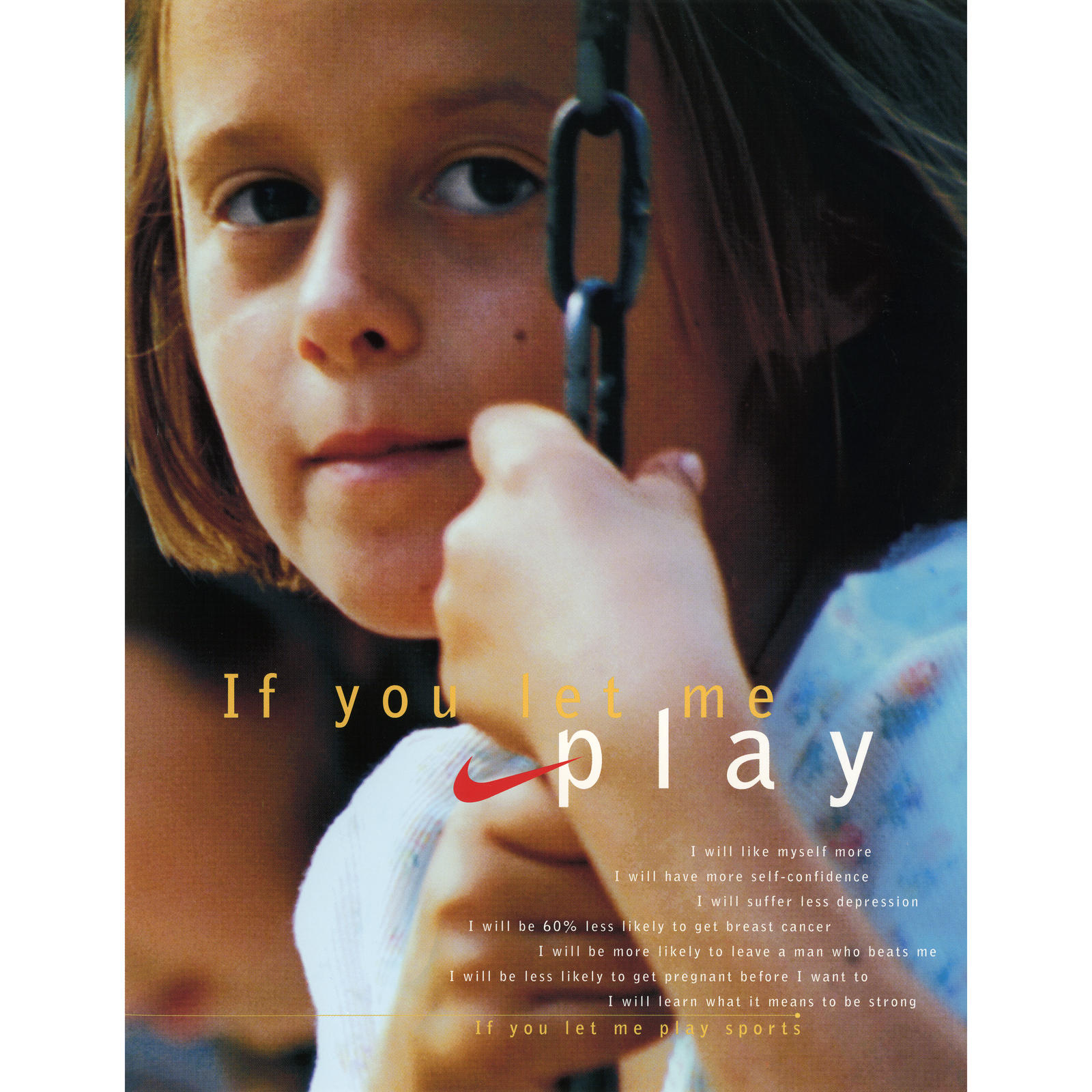 In the fall of 1995, Nike released a 30-second TV spot entitled, “If You Let Me Play.” The film introduced a new approach to inspire female athletes, emphasizing how sports benefit the lives of girls. The campaign was chosen as one of the best ads of 1995 by readers of USA Today.

Twenty years later, “If You Let Me Play” still maintains cultural relevance and remains one of the top references in examination of women’s sports media. 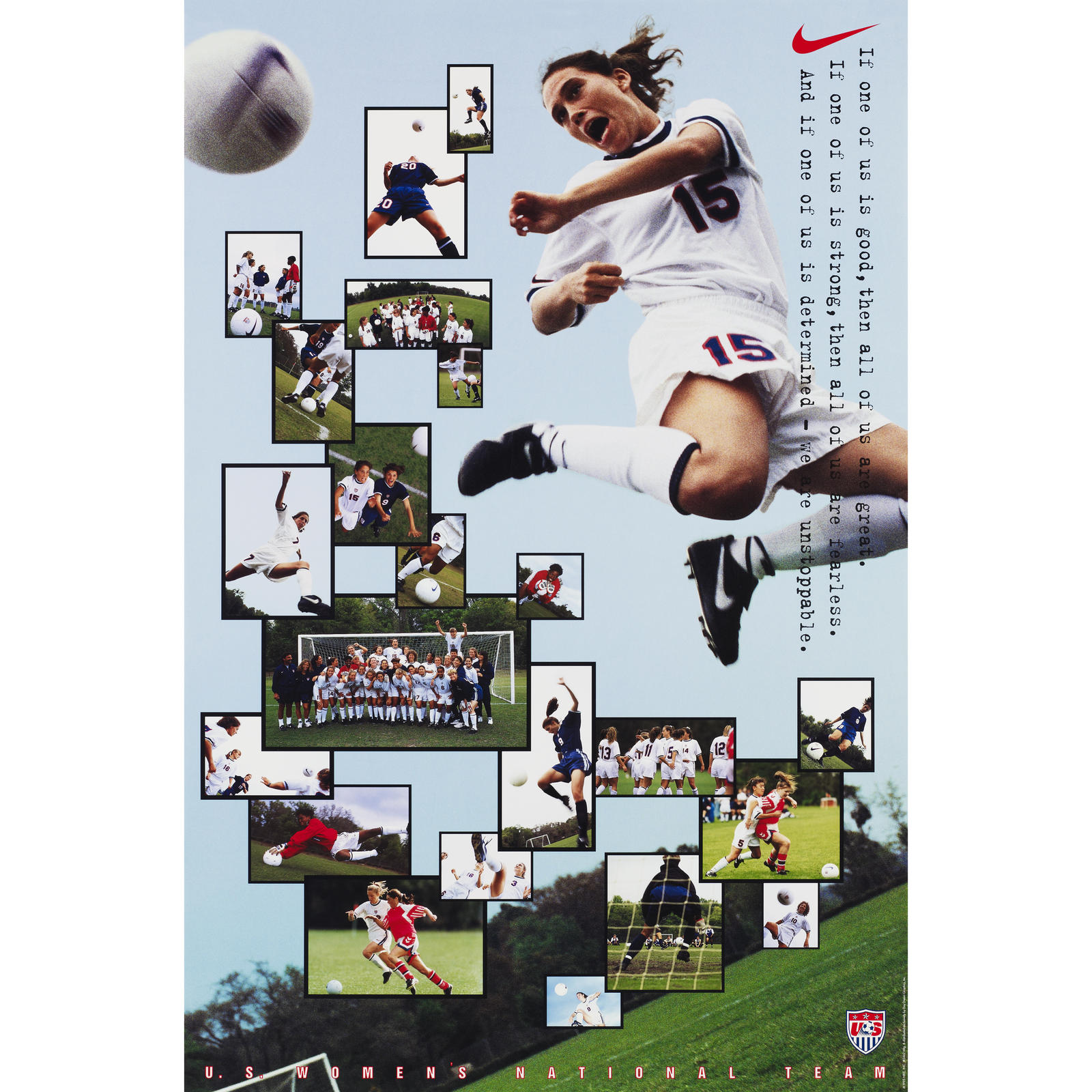 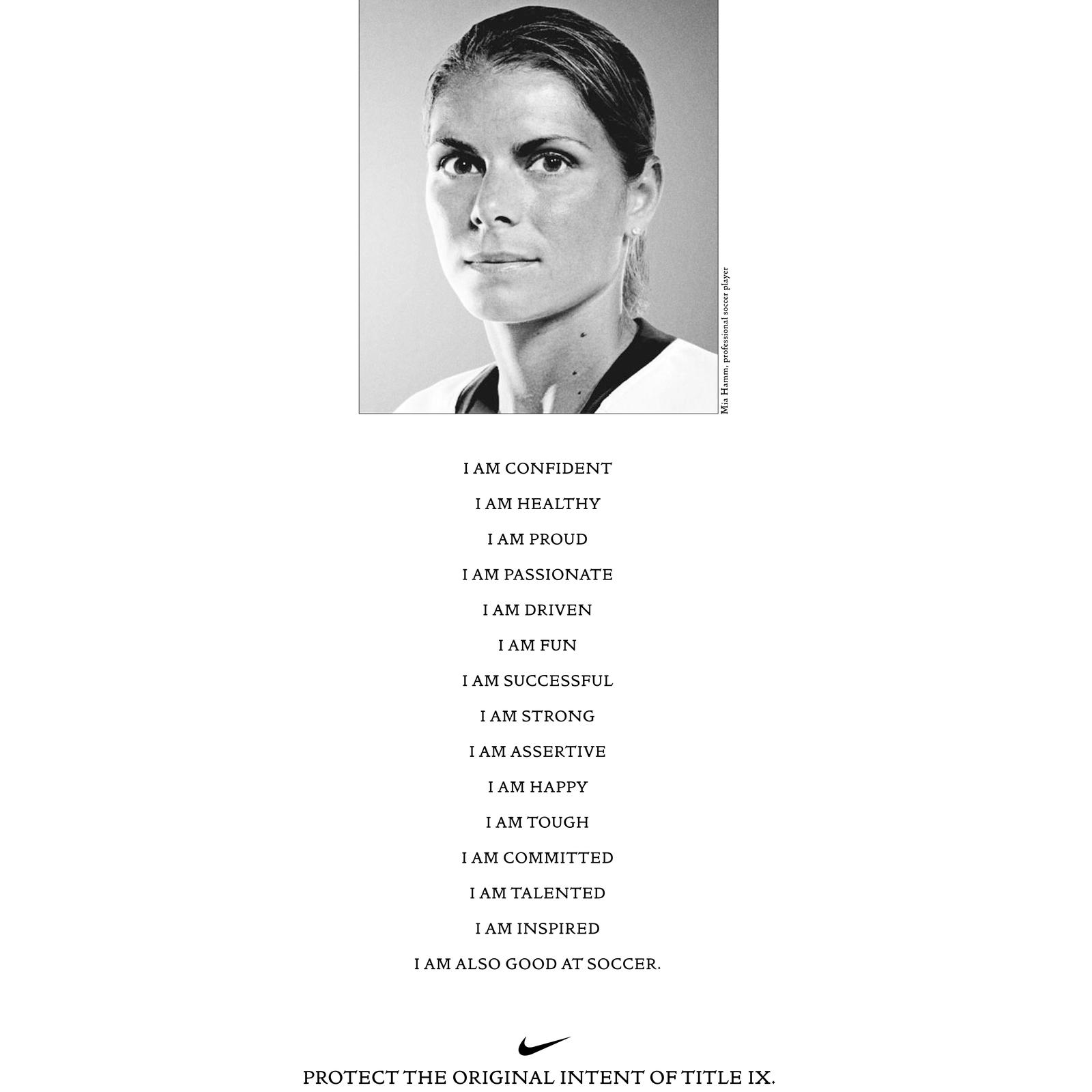 With 90,000 watching in the stands, the largest audience ever to attend a women’s sporting event, the U.S. soccer squad captured the World Cup title — and worldwide attention — in a dramatic penalty shootout versus China. Nike celebrated the athletes at every step of their journey and used the occasion to inspire the next generation of young female athletes.

Advocacy and Defying Stereotypes in the 21st Century (2000s) 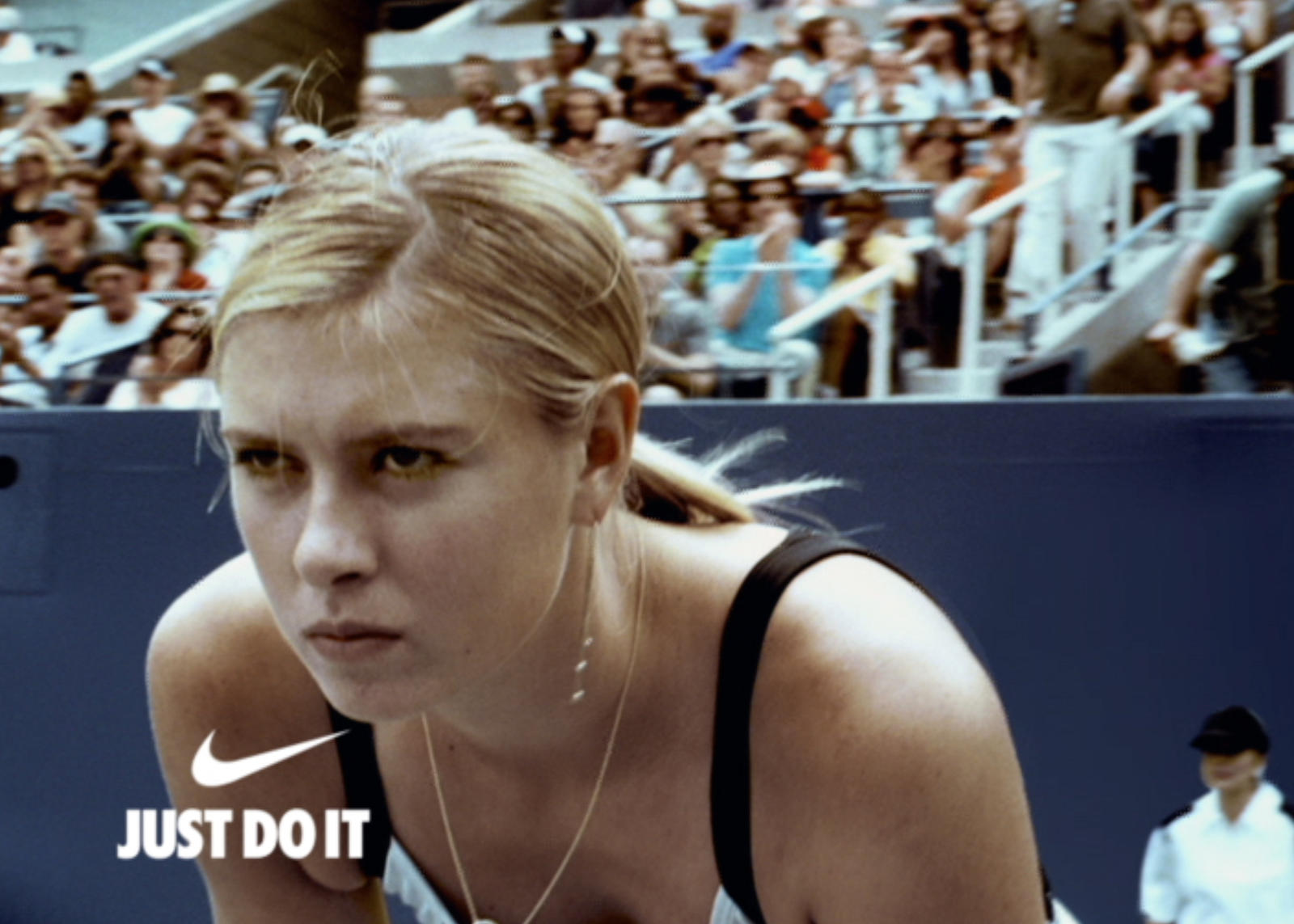 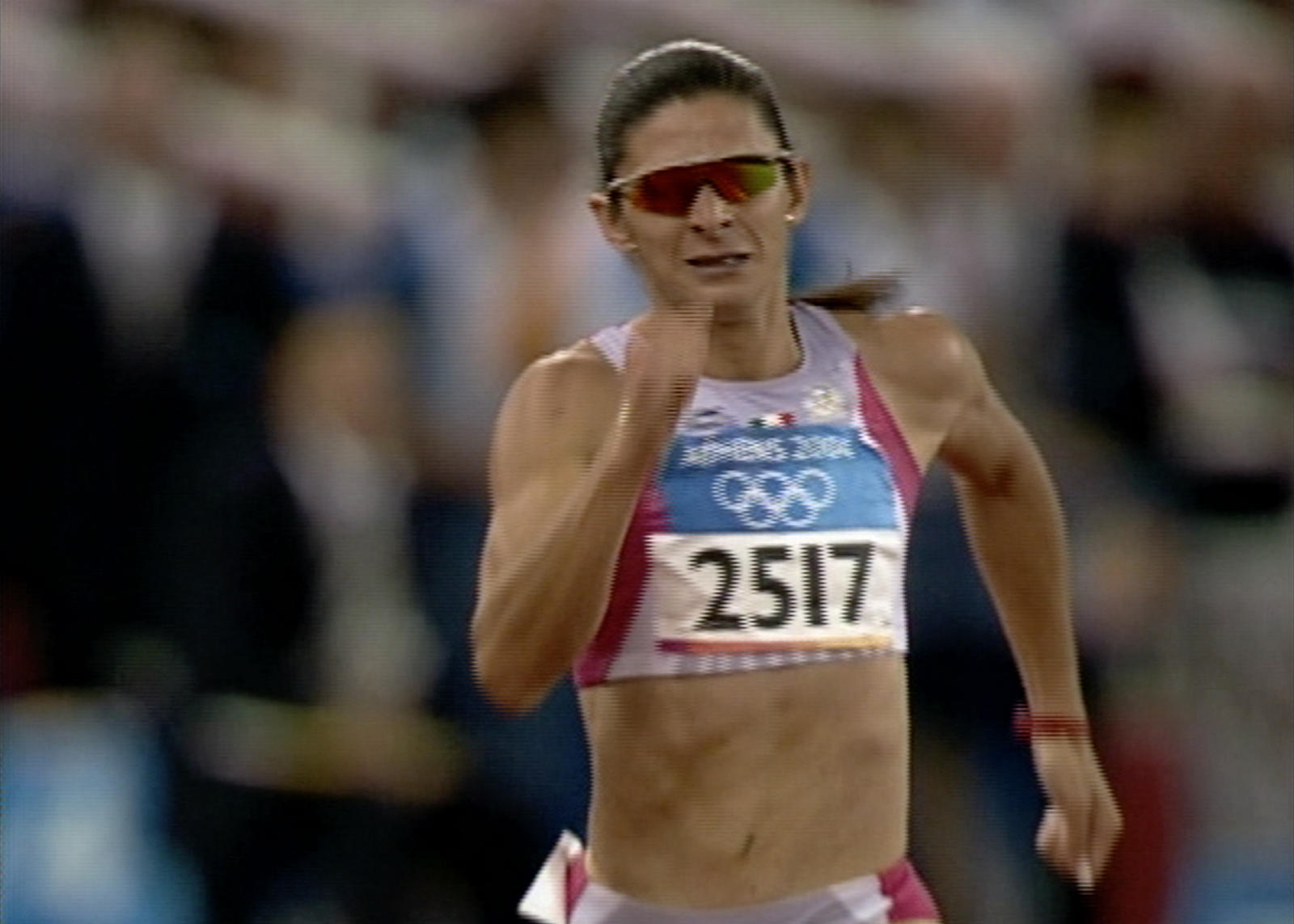 Building on strong female role models, Nike released “My Body Parts” print ads, which confidently talked about the size and strength of a female athlete’s butt and thighs.

In 2004, around Athen's Games, Nike released “Mi heroe es una chava,” (My hero is a girl) to celebrate 400-meter sprinter Ana Guevera. She became the first Mexican female track athlete to win a gold medal in a major international competition in 2003, and won silver in Athens.

In 2006, Nike launched its first campaign with Maria Sharapova. Titled “I Feel Pretty,” the spot playfully communicated the message that beneath Maria’s beautiful, feminine exterior lives the intense competitive appetite of one of the top athletes in the world.

On April 4, 2007, during Women’s March Madness, the Rutgers women’s basketball team was the focus of a string of offensive remarks. It sparked conversations that led to the Athlete campaign. The video component involved a bevy of athletes and coaches, including Mia Hamm, Picabo Street, Serena Williams and Gabrielle Reece, voicing their opinions and challenging gender stereotypes. Nike also ran a full-page ad in The New York Times that read, “Thank You Ignorance. Thank you for starting the conversation. Thank you for unintentionally moving women’s sport forward.”

Nike catalyzed a dialogue with women in 2008 with “Here I Am,” a multi-media campaign that showed how girls in sport are stronger in body and mind by highlighting the mental strength of young world-class athletes like Sofia Boutella and Maria Sharapova. 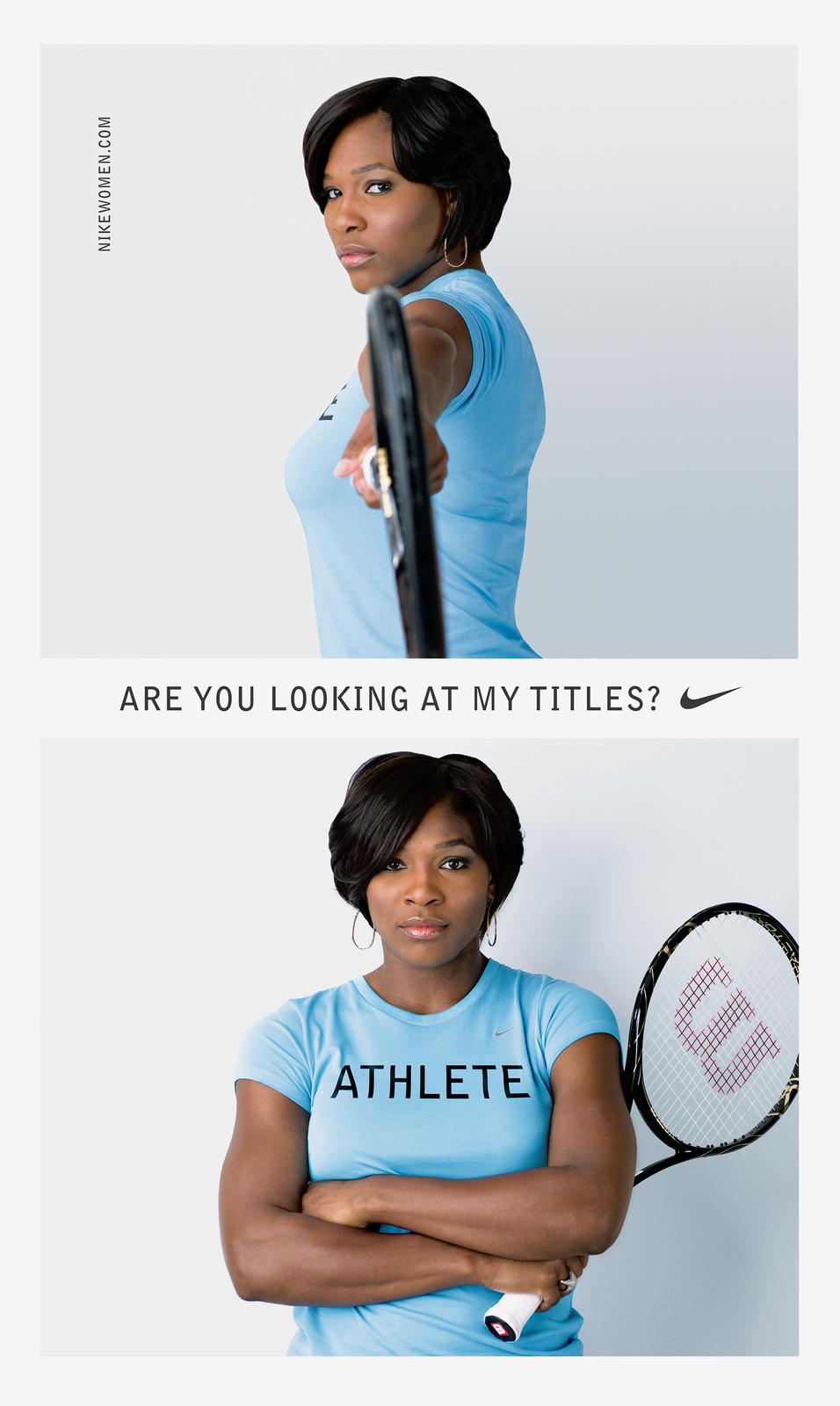 Despite a series of potentially career-ending injuries and setbacks, Williams amassed more Grand Slam titles than any active player in the game with 34…and counting.

Known for her style and self-expression on the court, as well as her strong training ethic, Williams claimed a leading role in Nike’s ATHLETE campaign in 2007, and in Delicious Training in 2011. Serena was also one of the first athletes to be featured in the Nike+ Training Club app when it re-launched in 2013. 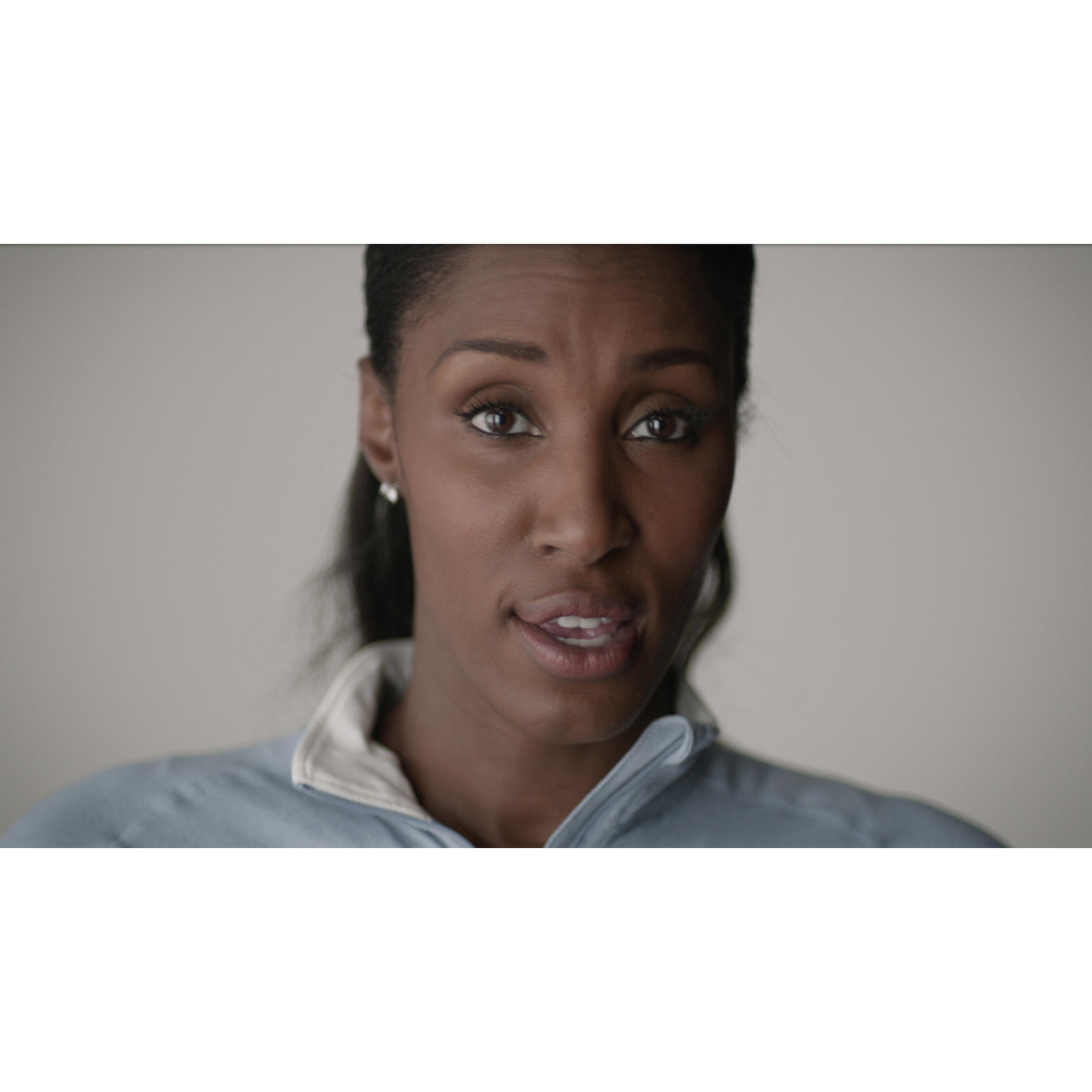 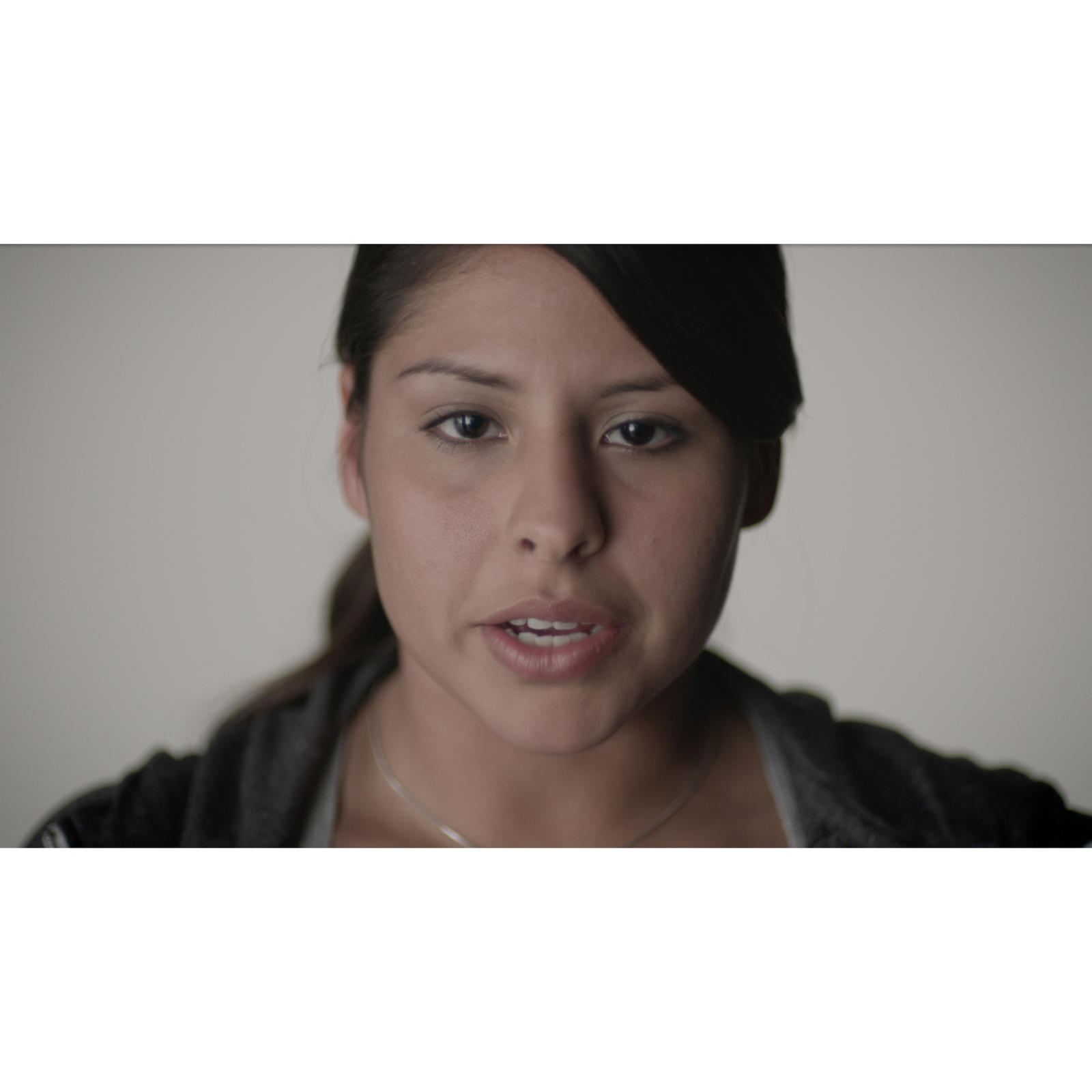 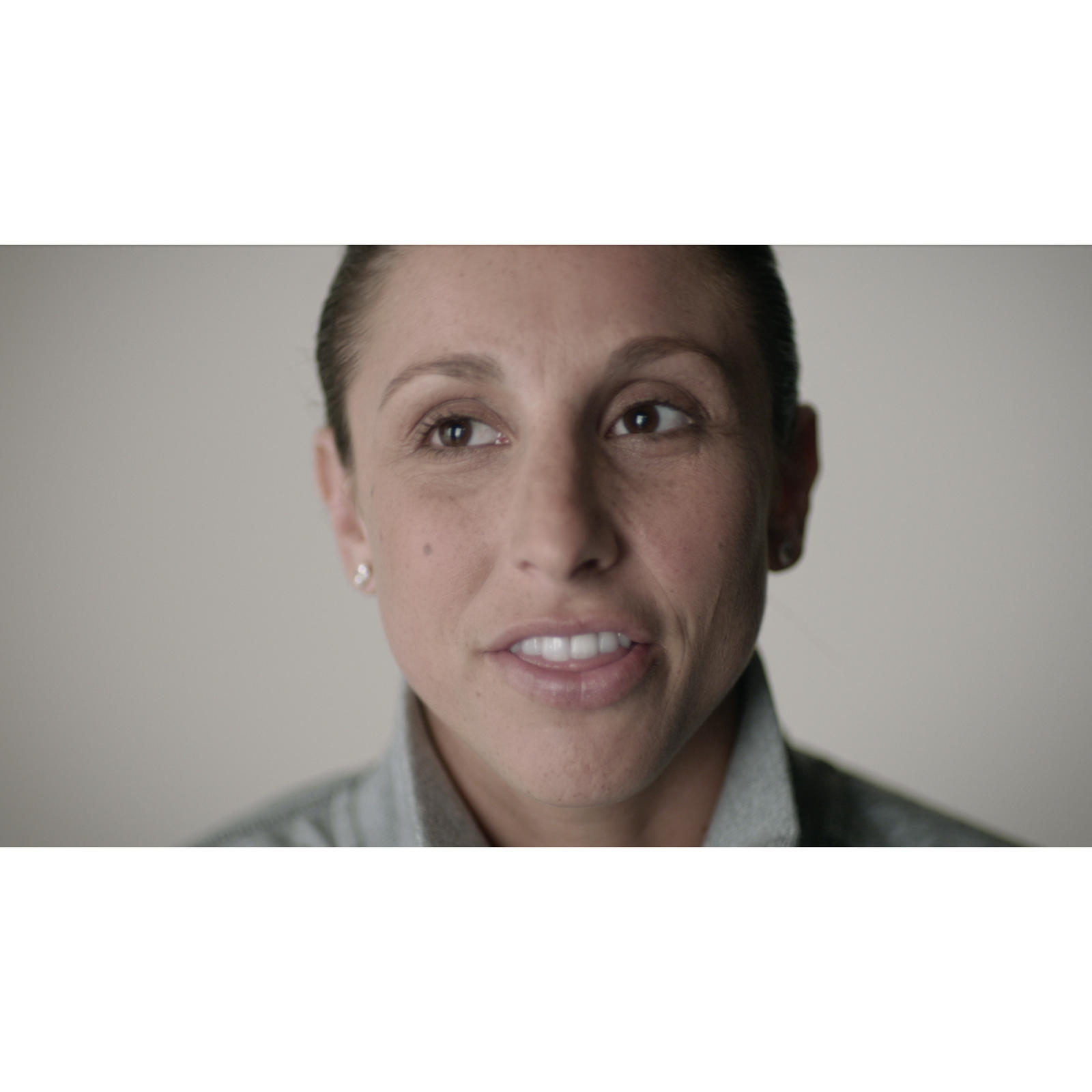 In December 2010, Nike released its rallying cry for women with "Make Yourself." The campaign encouraged women to think about who they want to be and how sport can help them find the confidence they need to become their best. 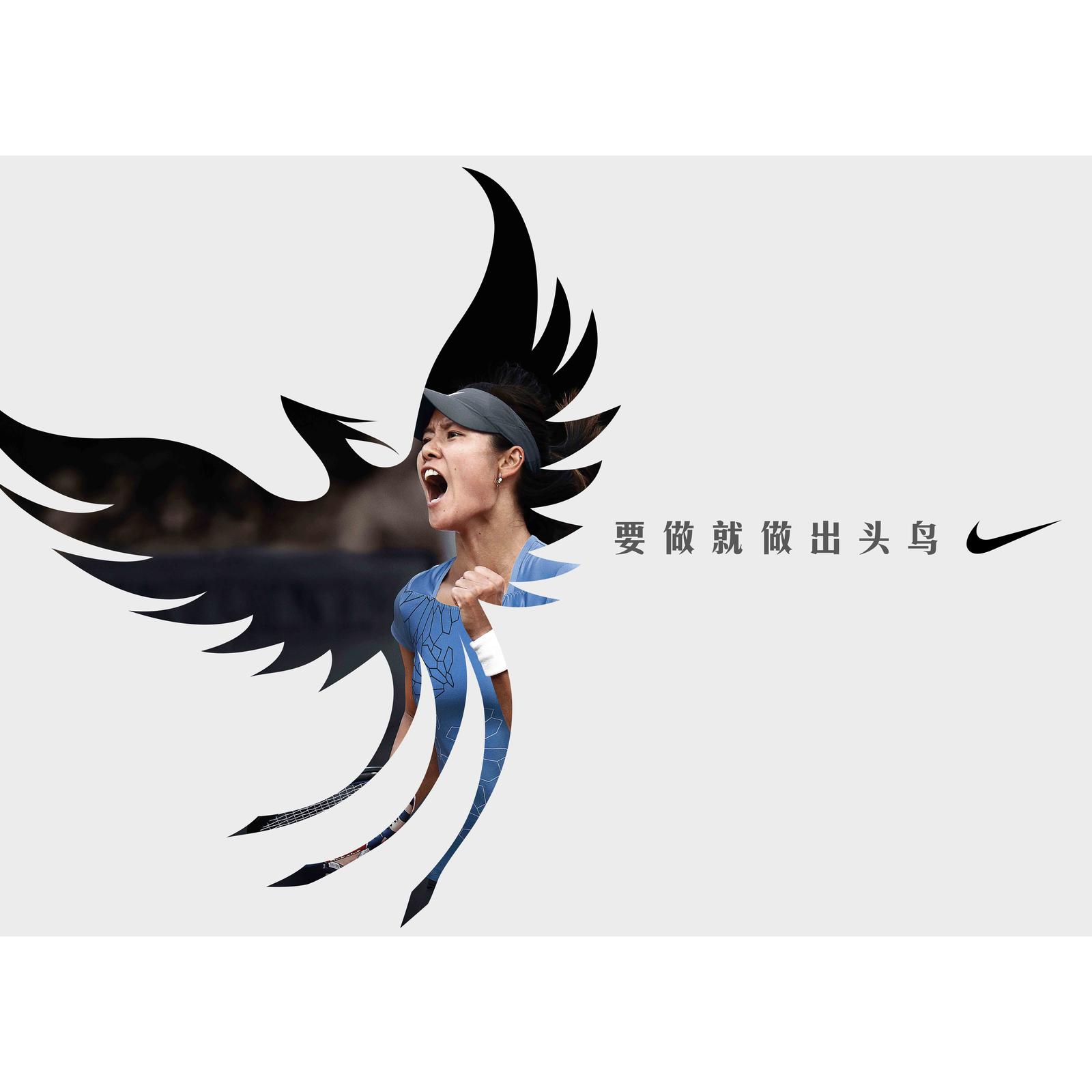 Li Na became the first Asian woman to win a tennis Grand Slam and the highest-ranked Chinese female player ever. In support of this Nike launched the campaign "Dare to aim higher than the sky" to celebrate her success and inspire a new generation of Chinese athletes. When she announced her retirement, Nike paid tribute again with "Be the Bird that Sticks Out," featuring the icon of a phoenix spreading its wings.

Today Nike continues to break boundaries and grow with female athletes. The launch of #betterforit builds on Nike’s history of advocating for and championing women athletes at every level, from Grand Slam winners and Global champions to those looking for a new personal record or motivation for an extra workout. After all, Nike was named after a woman.