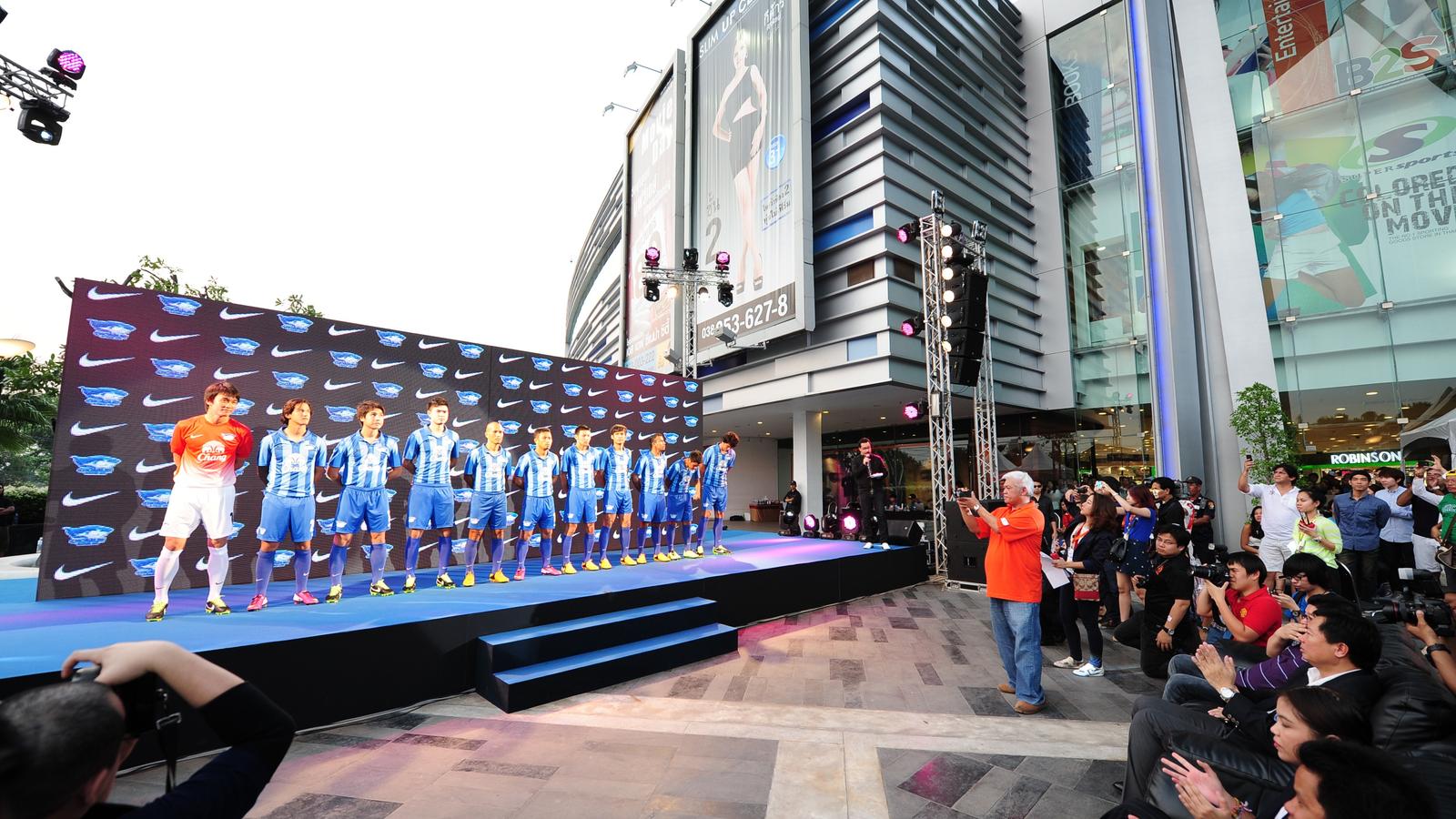 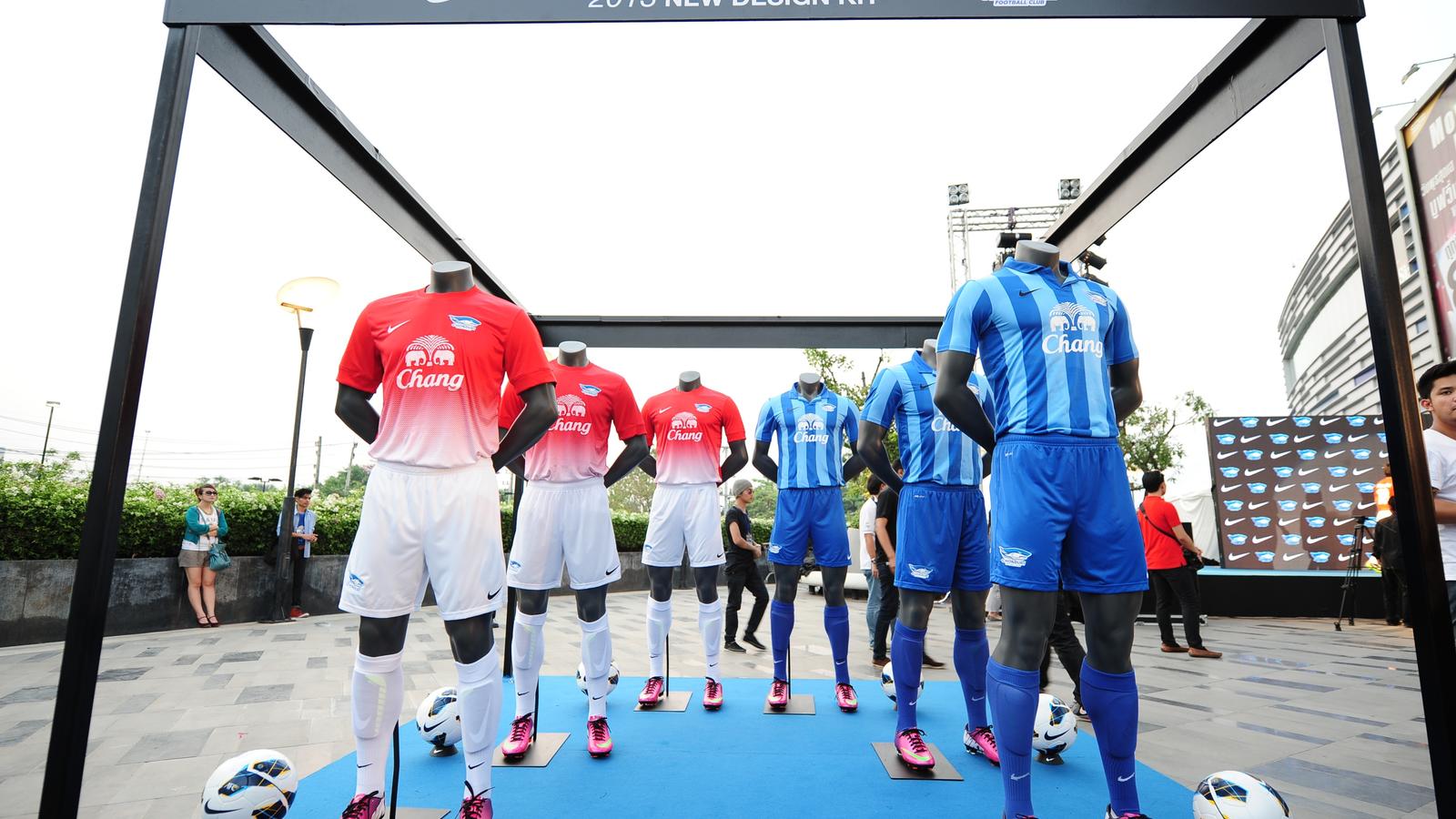 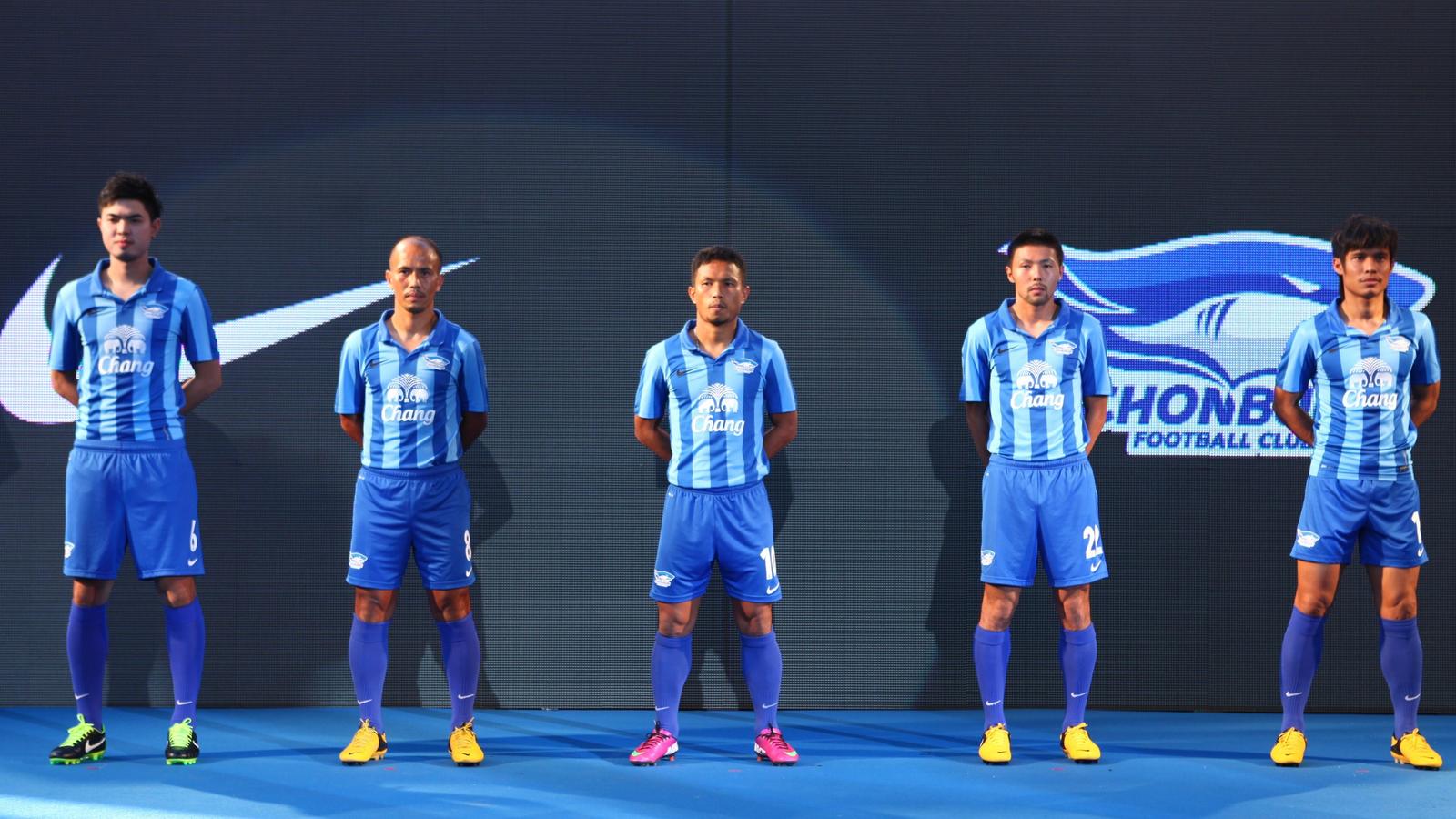 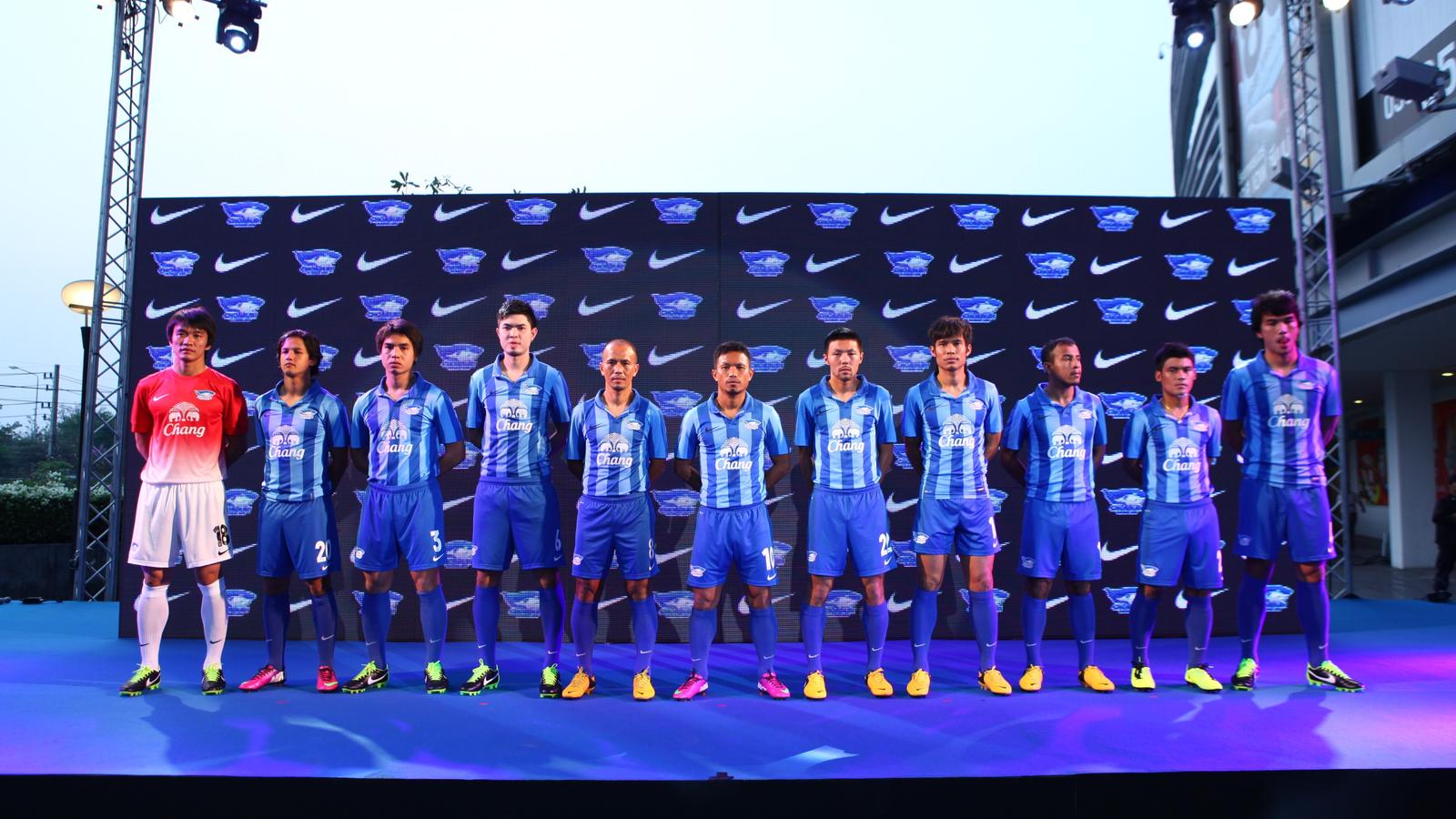 Nike Thailand and Chonburi F.C. today unveiled the new Chonburi club kits for 2013/2014 season in a unique colorway of blue and navy blue stripes along with a “Feel the Pride” design concept. In their new kits, the Sharks are aiming for the Thai Premier League championship title this season.

Ms. Pinnaratana Dasanabyaggha, Marketing Manager of Nike (Thailand) Ltd., and Mr. Wittaya Khunpluem, Chairman of Chonburi F.C., jointly announced a new collection of three club kits for Chonburi F.C.. The home jersey has stripes in the home colorway of blue and navy blue and features a vintage inside collar. On the right of the chest is the black Nike logo while the left of the chest sports the redesigned club crest of Chonburi F.C.. The home shorts, in blue color, completes the home kit. In the new away kit, the jersey comes in a color gradient design of red to white in linear from top to bottom plus a pair of white shorts. The third official match kit is a jersey with color gradient design of grey to white in linear from top to bottom together with white shorts. All three kits feature Nike Dri-FIT fabric technology for enhanced air ventilation and moisture absorption to keep the players comfortable and dry.

“Nike and Chonburi F.C. are now into our second year of partnership,” said Ms. Pinnaratana. “As part of this successful cooperation, Nike has been providing support to Chonburi F.C. teams from academy level to the first team squad, a proof of our commitment to help develop Thai football towards international presence and successes. The new home kit for this season pays homage to the colors used in 2007 season when Chonburi won their first Thai Premier League title. It clearly symbolizes the club’s goal to bring back the league trophy to Chonburi Stadium again this year.”

Apart from the new kits for 2013/2014 season, Nike also rolled out a new campaign “Feel the Pride” to show the players’ high spirits and their determination for victory as they kit themselves out in the new uniforms.

Chonburi F.C.’s first team coach Witthaya Laohakul commented, “Chonburi is one of the greatest team in Thai football because of our professional management and the potential of the footballers, staff and sponsors, along with a strong base of passionate football fans and club supporters. With good training and new key players, I am confident that Chonburi will regain our prominence and the Thai Premier League title again this season.

For more information and updates, please check out nikefootball.in.th and facebook.com\nikefootballTH.

On 11 February 2012, Nike announced a historic partnership with Chonburi FC as the official sponsor of the Thai football club, the first-ever official support of Nike for a football club in Southeast Asia. The move grounded on Nike’s foresights in Chonburi’s potential to progress to the international football arena with its professional management, legacy and well-built track records of the club, as well as their time-proven role as an active contributor in building a strong foundation for Thai football development. This 3-year partnership started in 2012. Under the sponsorship agreement, every Chonburi F.C. team shall be kitted in Nike uniform in every match that is officially accredited by the Football Association of Thailand under Patronage of His Majesty the King and the Asian Football Confederation. Nike shall provide competition and training kits and equipment for the footballers, team coaches and all other staff.