The athletes who have defined Nike Track & Field over the past four decades are those with attitudes as sharp as their spikes. They run any time, as long as it’s fast. They break records and trends. 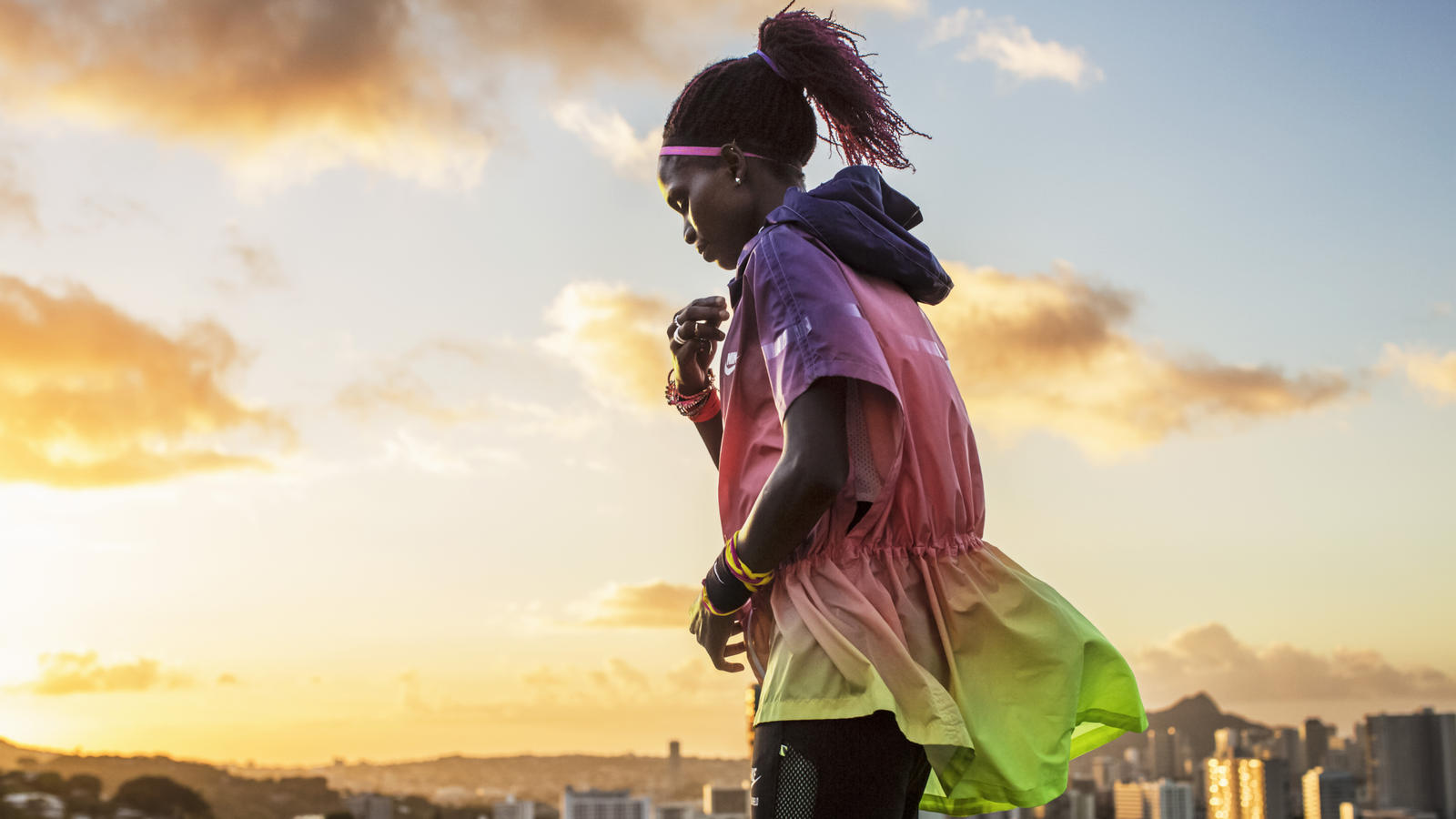 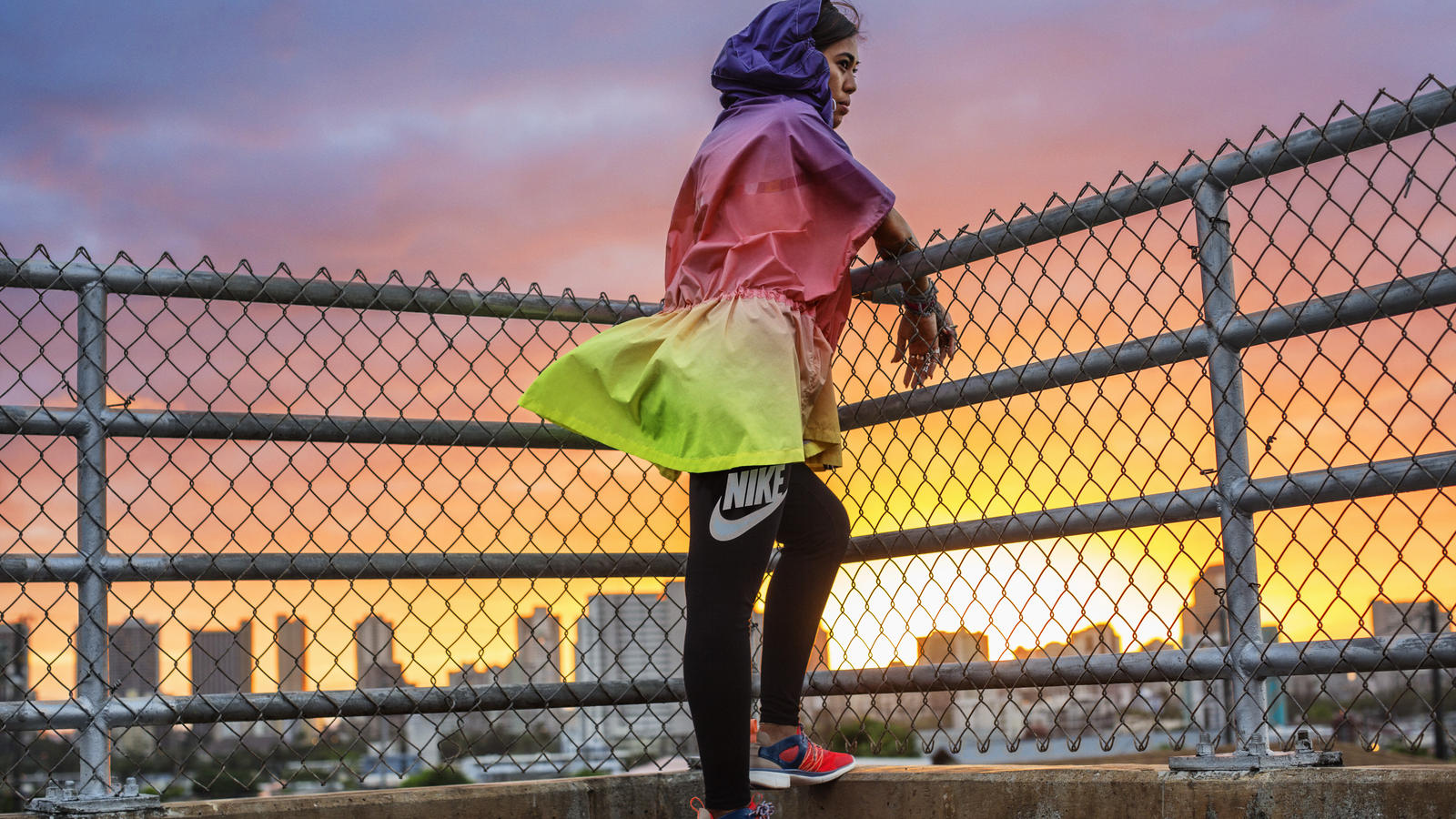 Nike Track & Field athletes are the sport’s instigators, rebels and renegades. They are driven by an unrelenting desire to lead, not just in a race, but also in style.

Agatha Jeruto Kimaswai and Valerie Julian are two individuals who embody the spirit of Nike Track & Field. For Kimaswai, running has positioned her to challenge for a spot on the world’s greatest stage next summer. For Julian, running represents a connection to community and a challenge for both mind and body. But while both Kimaswai and Julian may run for different reasons, they each lead from the front. 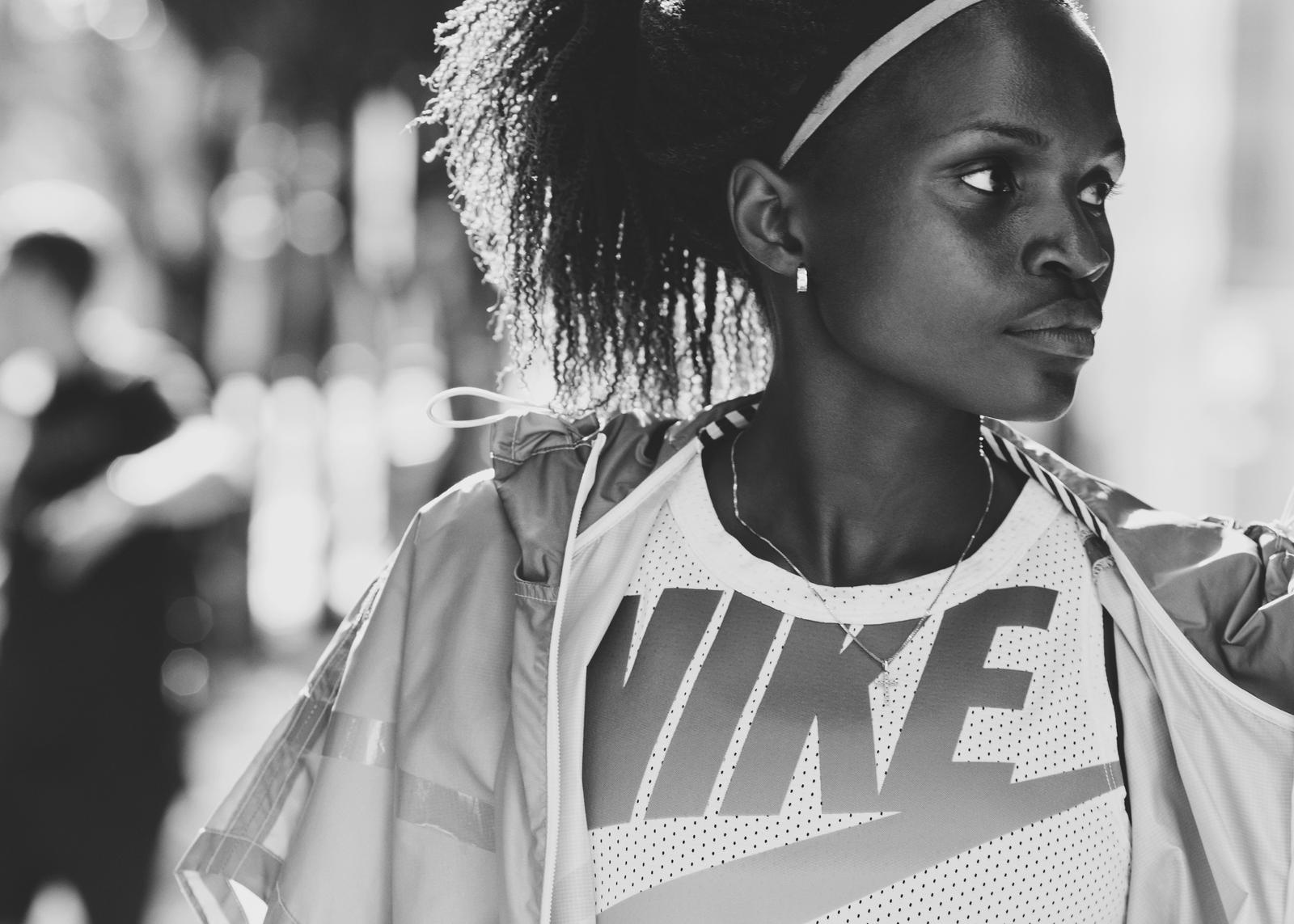 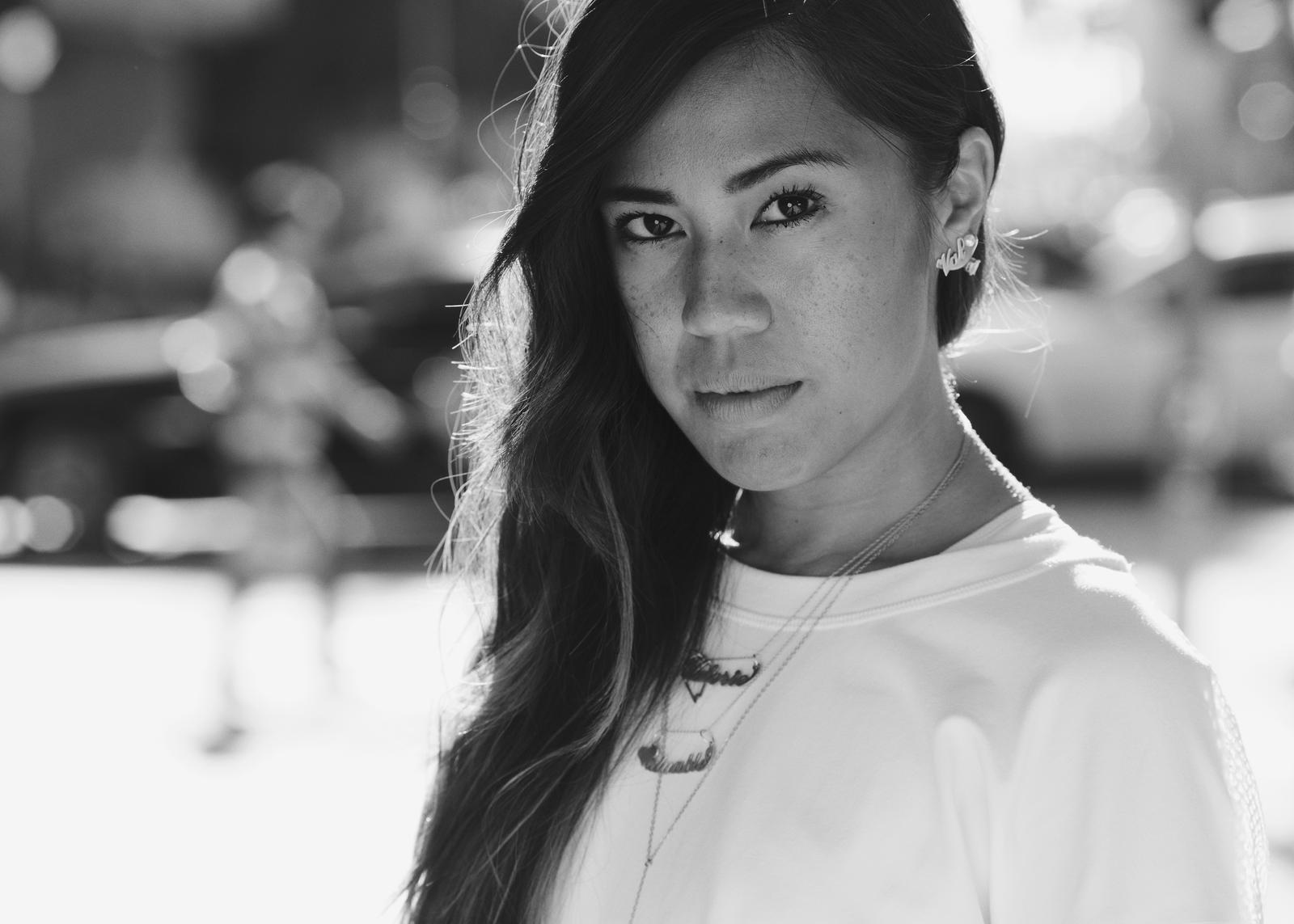 Growing up in Kenya, Kimaswai’s talent was undeniable.

“When I was younger, I knew I had something,” Kimaswai says. “I was always the leader and always the captain, no matter the sport.”

This drive to be first has benefitted the 21-year-old as she begins to compete against the world’s fastest runners. A rising star in the 800 meters, Kimaswai’s strategy is to control the pace of the race by leading from the outset. 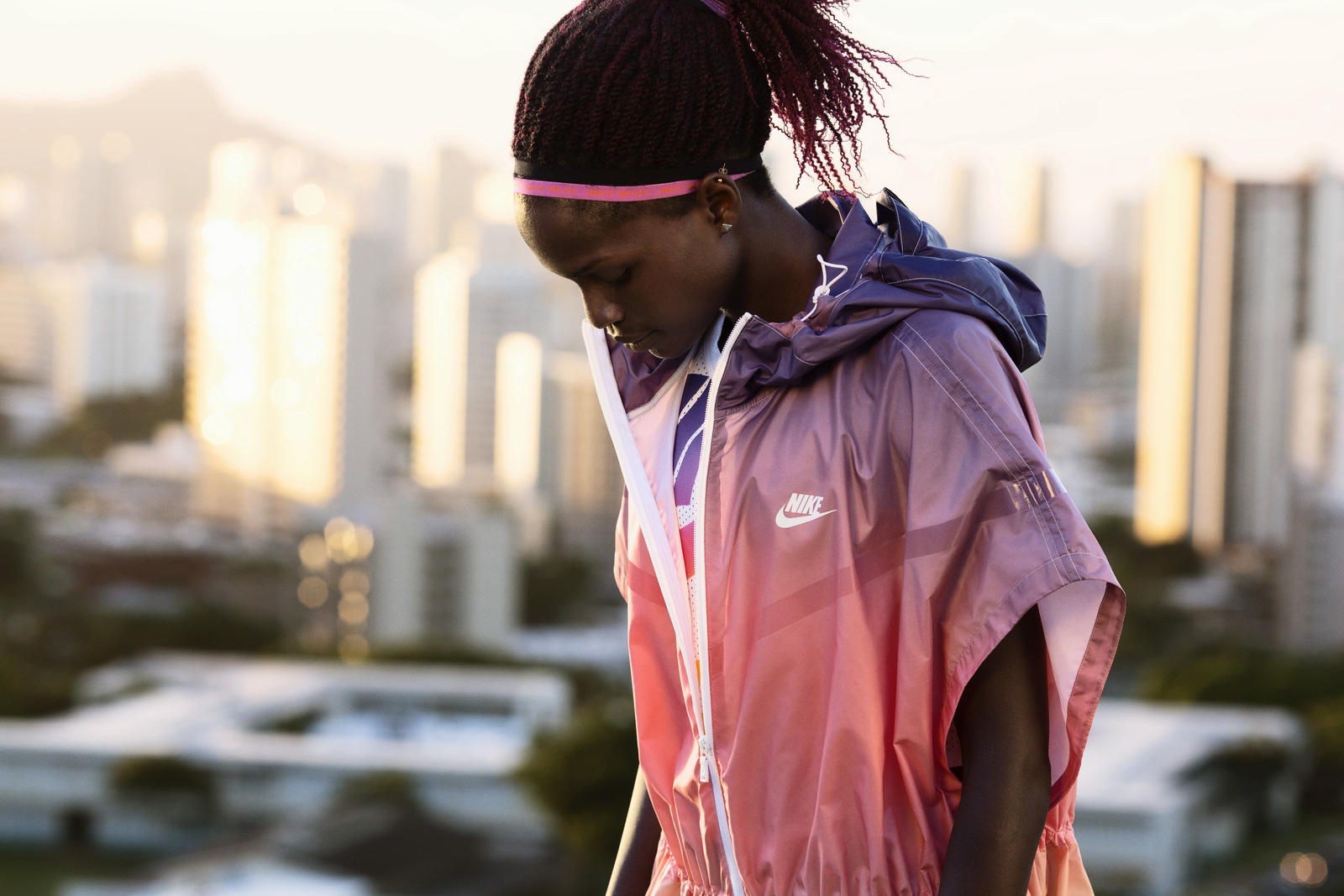 “I like to lead the group because I know if I can take control of the pack, I will have the strength and fight in me to hold my competitors off down the stretch,” Kimaswai says.

Valerie Julian may not lead every race. But through her own will and determination, the Las Vegas native has become a leader in her community. When she was just 18 years old, she co-founded Fruition Las Vegas, a curated shopping destination. For Julian, it was a risk. But fashion was her dream, so it was a risk worth taking. The payoff has been tremendous, as Fruition recently opened a second store in Los Angeles. Julian is leading this new venture, as well as serving as the creative director of the company. 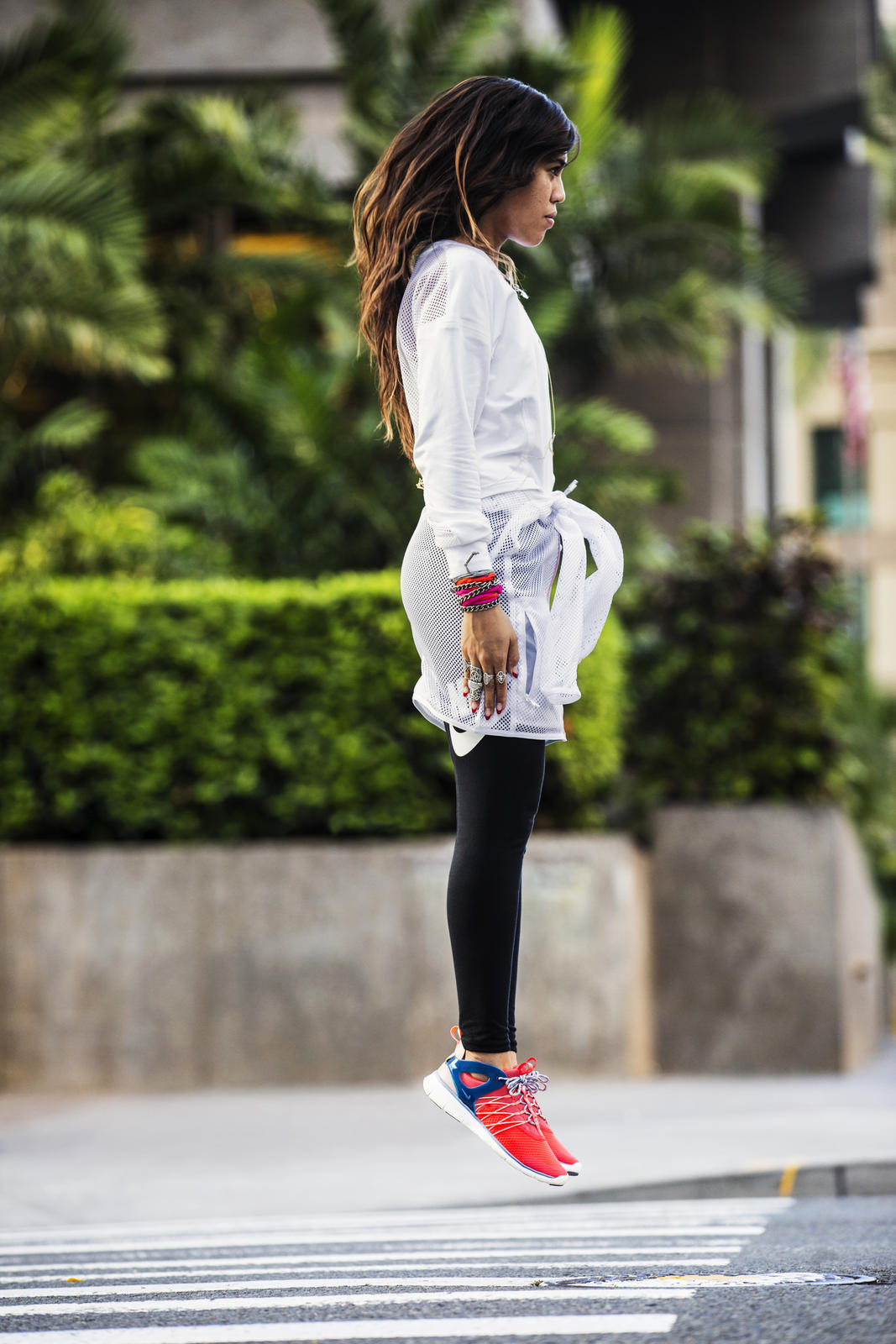 “Fruition, by definition, is the achievement of dreams,” Julian says. “Our mantra is, ‘limitless in life and style.’”

Challenging convention in style is a fundamental goal of Fruition. For Julian, the thrill of the challenge is also what drew her to running. Through the gentle nudging of a friend, Julian signed up for her first race. She now has a few marathons under her belt.

“Running in itself is such a great sharpening exercise for your mind,” Julian says. “It goes beyond the physical aspect. Running a marathon requires you to believe you can do something before you can do it. It truly is about mental toughness and continuing to trust that you can finish the race.”

Julian has also been instrumental in the development of Mission I’mPossible, an organization aimed to encourage personal development through sport, fashion and philanthropy. Among other activities, the group meets for weekly runs.

“Running is our connection to the community,” Julian says. “It’s a common ground and has allowed me to meet so many incredible individuals from different careers and cultures.”

This includes Kimaswai. Recently, the two met in what both describe as a powerful moment.

“It was inspiring,” Julian says. “Our common love of running isn’t the only thing that unites us. We invest in what we believe in and commit ourselves to being our best selves, whether that is through training, inspiring our team, or bringing out the best in our families.” 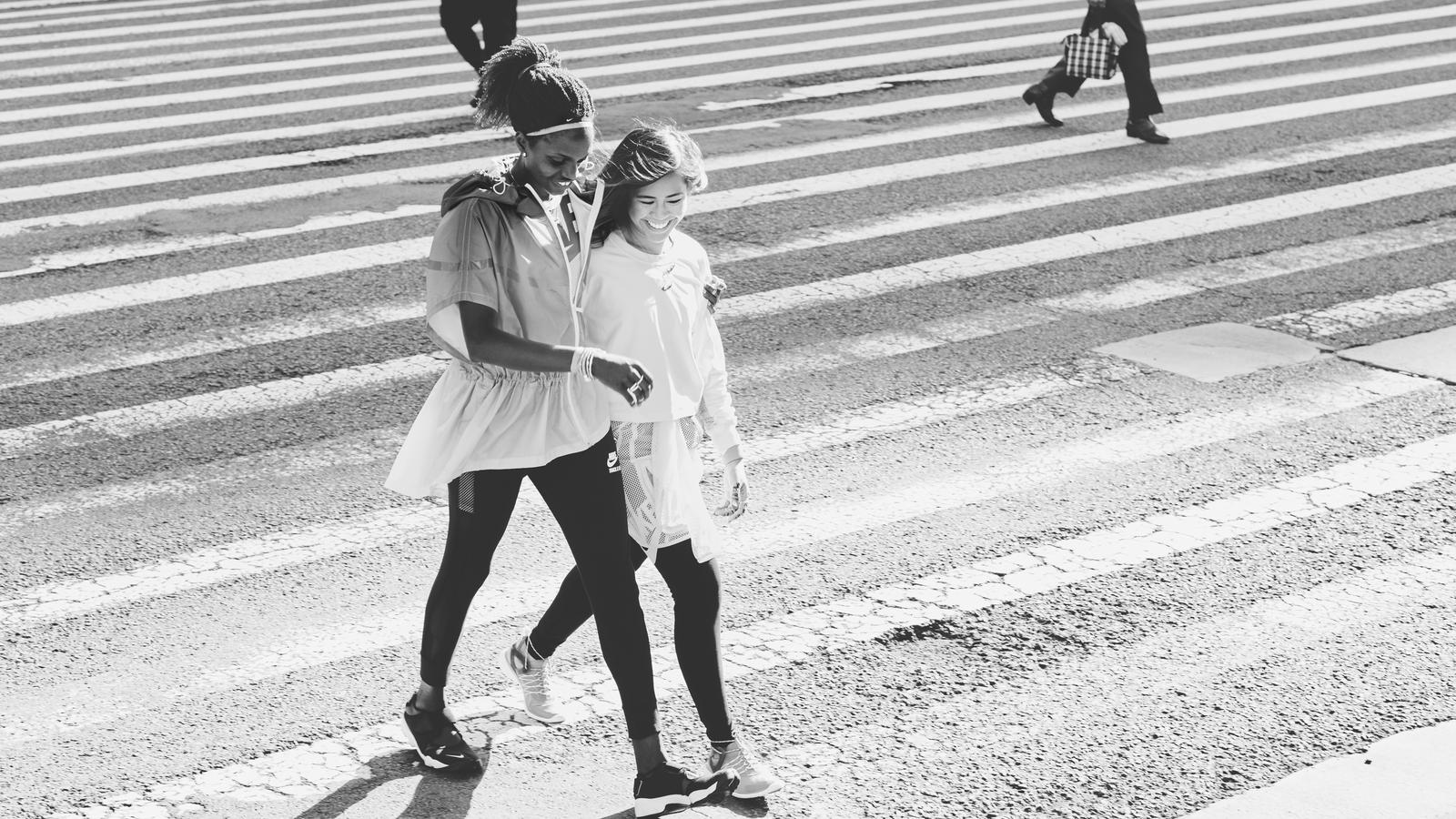 “We learned a lot from each other,” Kimaswai says. “We’re both passionate about working hard and fighting a good fight in order to become champions in the future.”

About the Nike Track & Field Men and Women's Collection

The Nike T/F collection delivers modern silhouettes that blend transparency and mesh for breezy summertime expressions. In search of inspiration for the collection, the Nike Sportswear design team studied local run crew culture around the world. It discovered that members of these crews are on the move from dusk until dawn, whether they’re going for a run or socializing with friends. The collection’s bright sunset colors are inspired by the notion that the sun never sets on a run crew member’s day.

A consistent thread throughout the collection is a signature hazard stripe found on the interior lining of the apparel. The hazard stripe pays homage to the urban runner’s environment, as well as to the iconic Air Max 1 shoebox.

The women’s collection is highlighted by the Nike T/F Sunset Windrunner Poncho, which offers lightweight weather protection with a dropped-back hem for added coverage. The Nike T/F Mesh Cropped Tank delivers ventilated comfort for the warm summer months, while its cropped design provides a modern expression. Completing Kimaswai's look is the Nike T/F Mesh-Mix Cuffed Pants, which feature mesh side panels for breathability and cotton-spandex fabric for stretch and a soft feel. 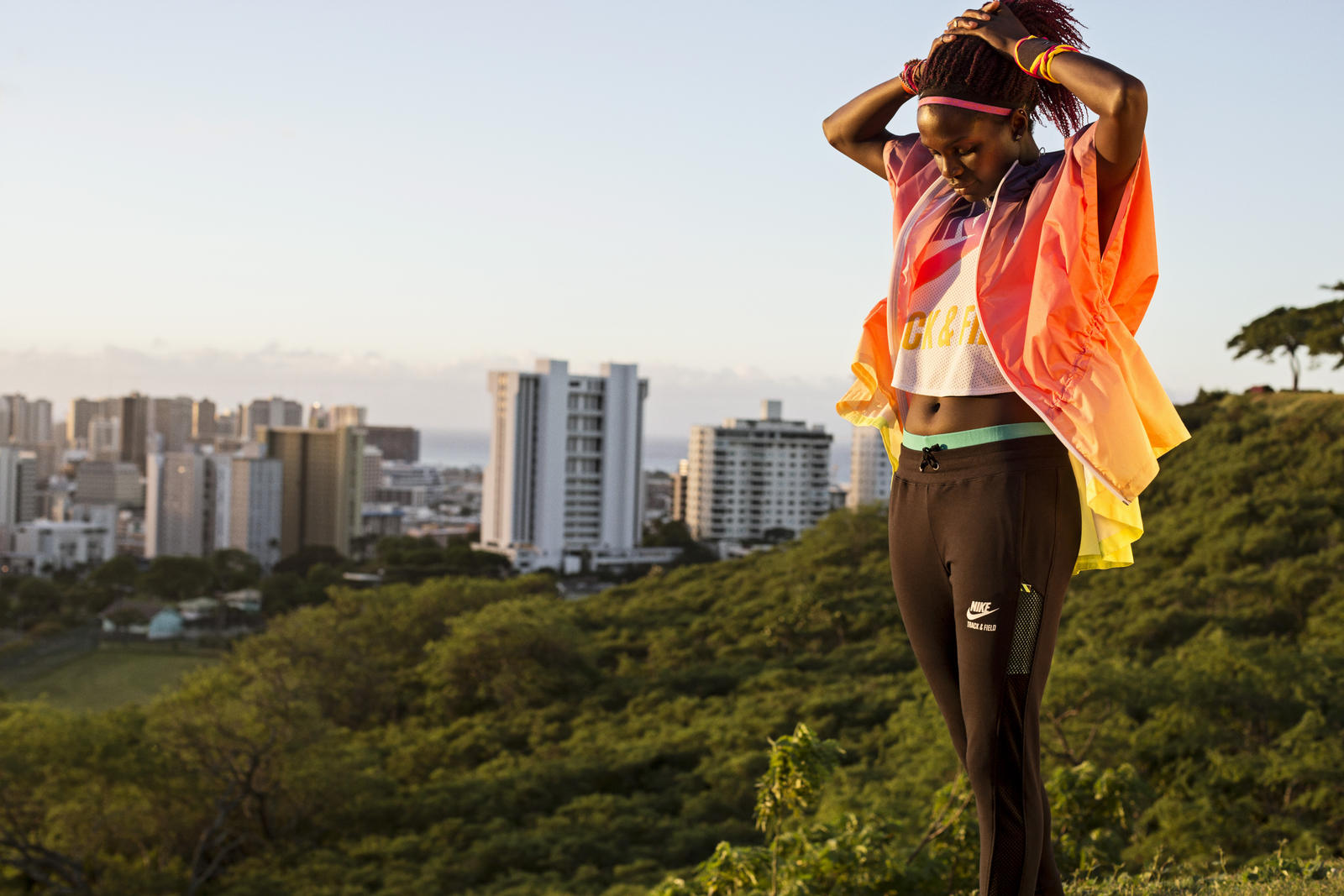 The men’s Nike T/F Crew delivers a modern look with an asymmetrical zipper that runs down the left side of the garment. Composed of soft and warm French terry fabric, the garment layers perfectly over the Nike T/F Gradient Tee. The Nike T/F Cuffed Slim Pants offer a slim cut for versatile, all-day style. 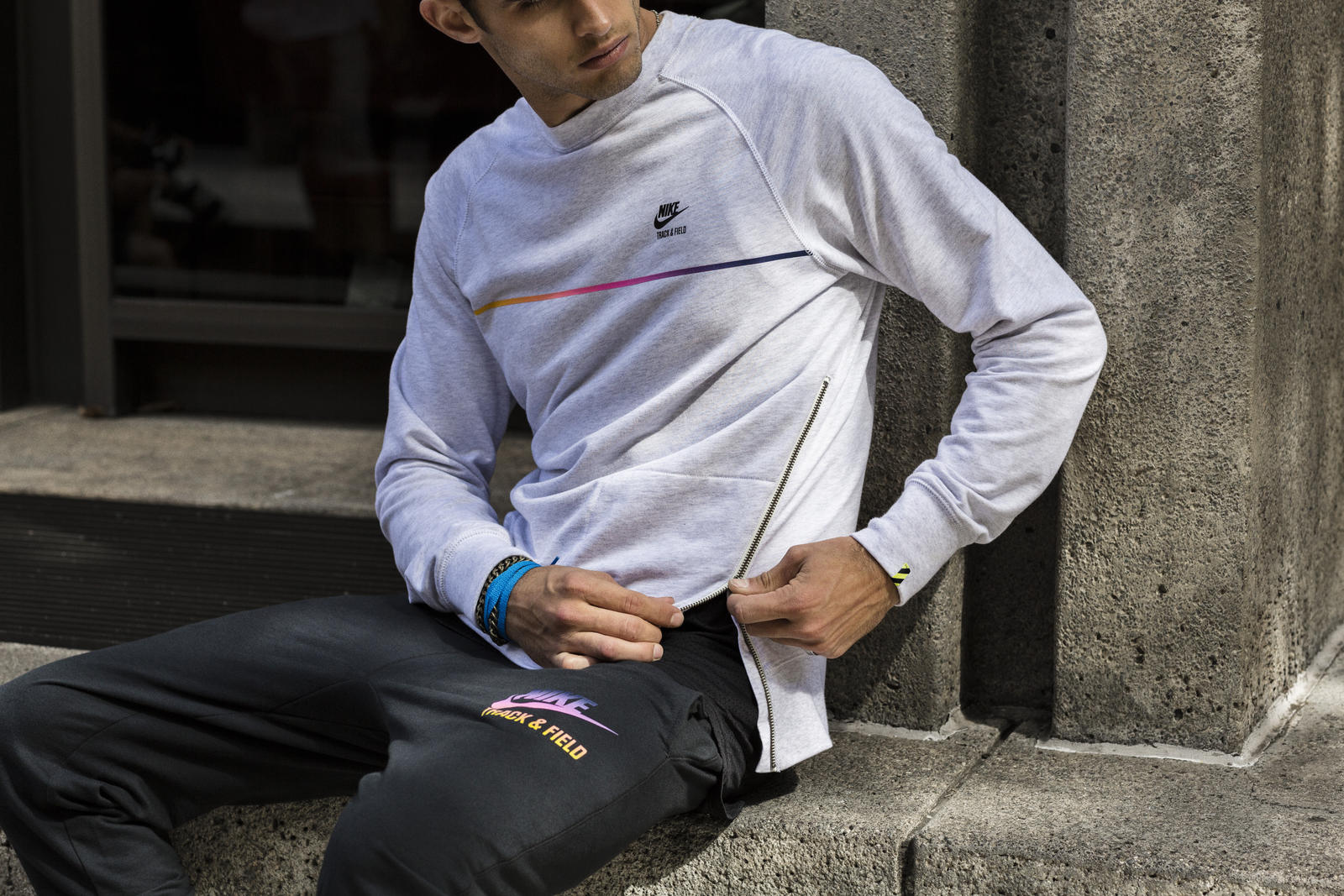 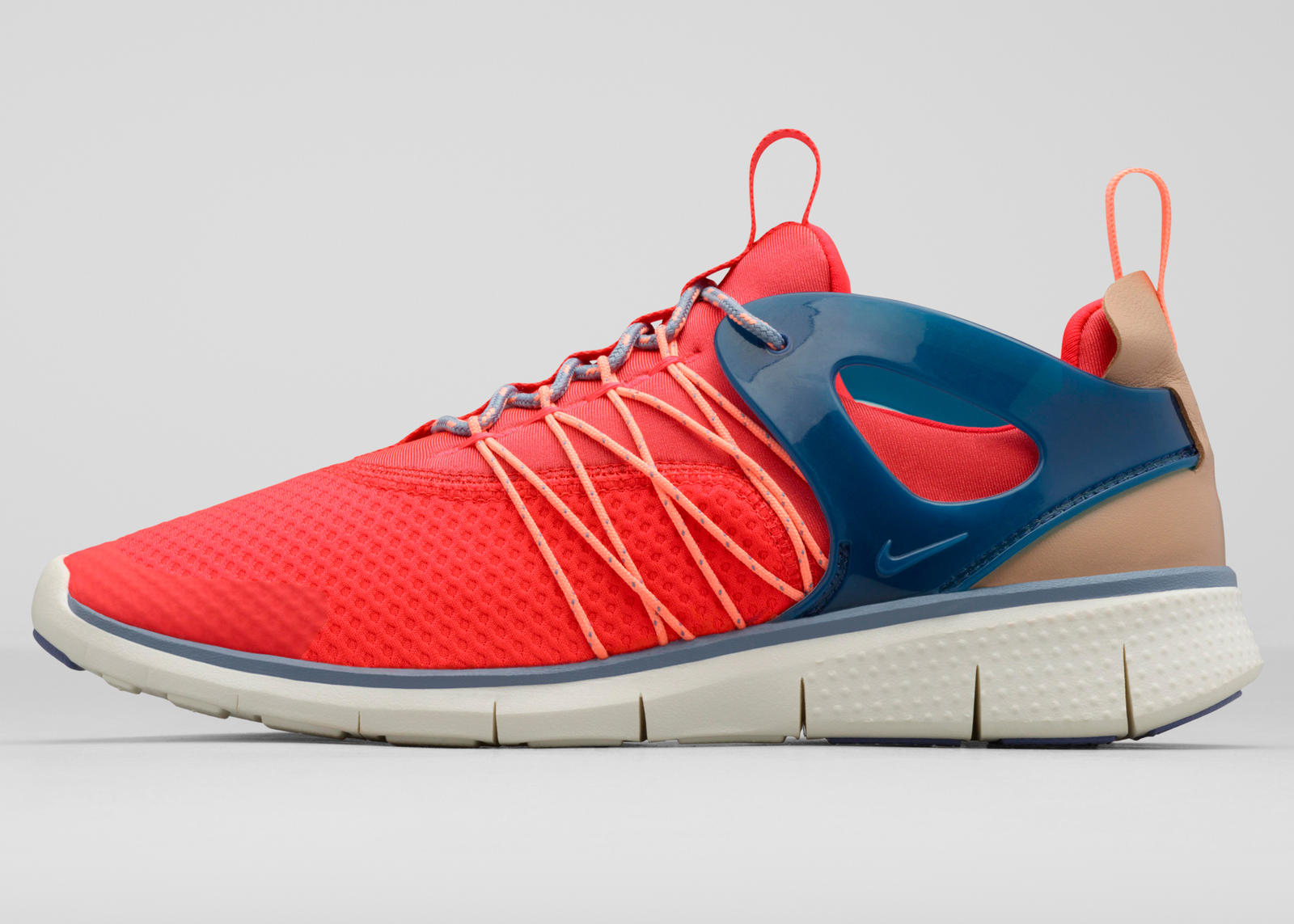 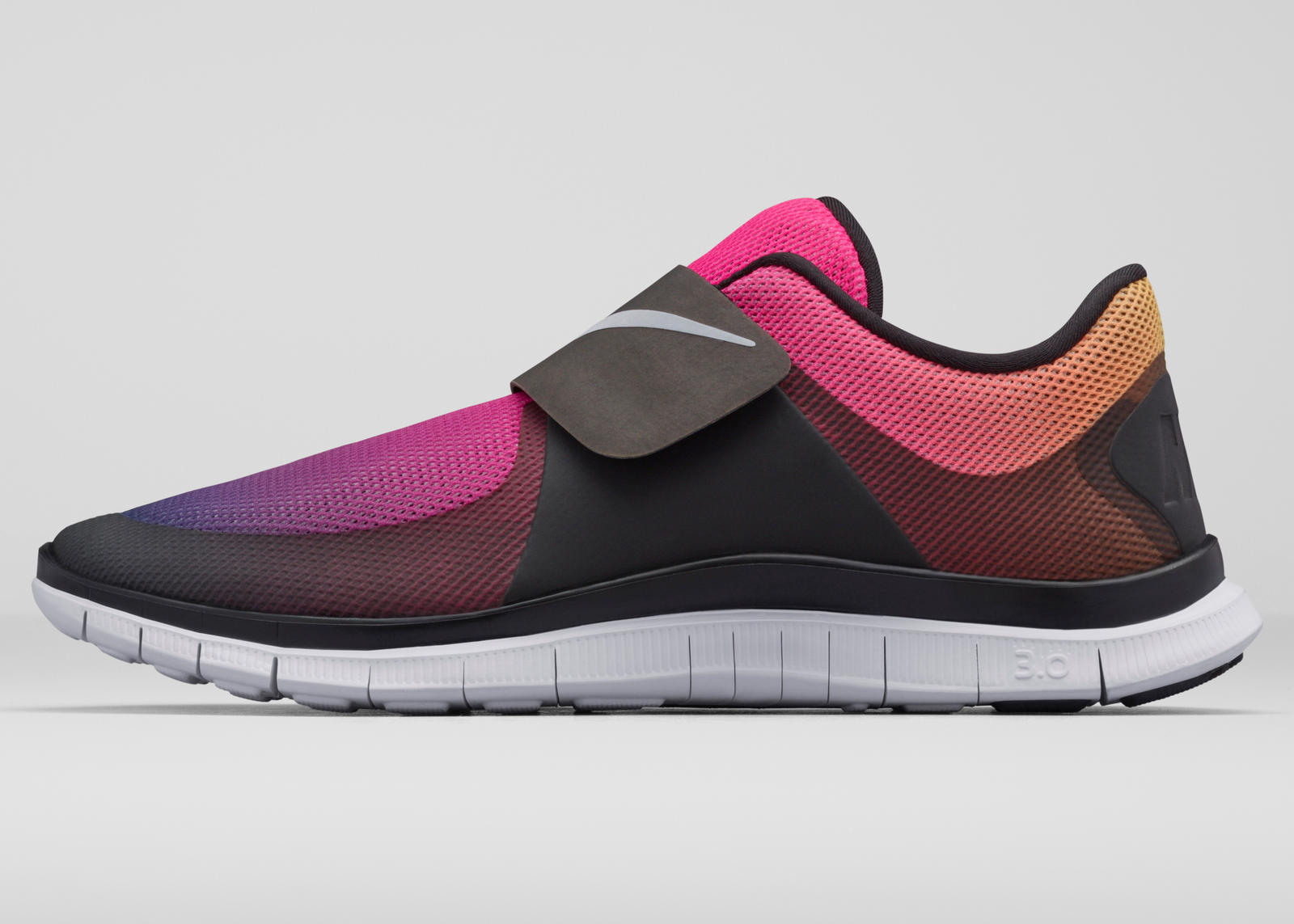 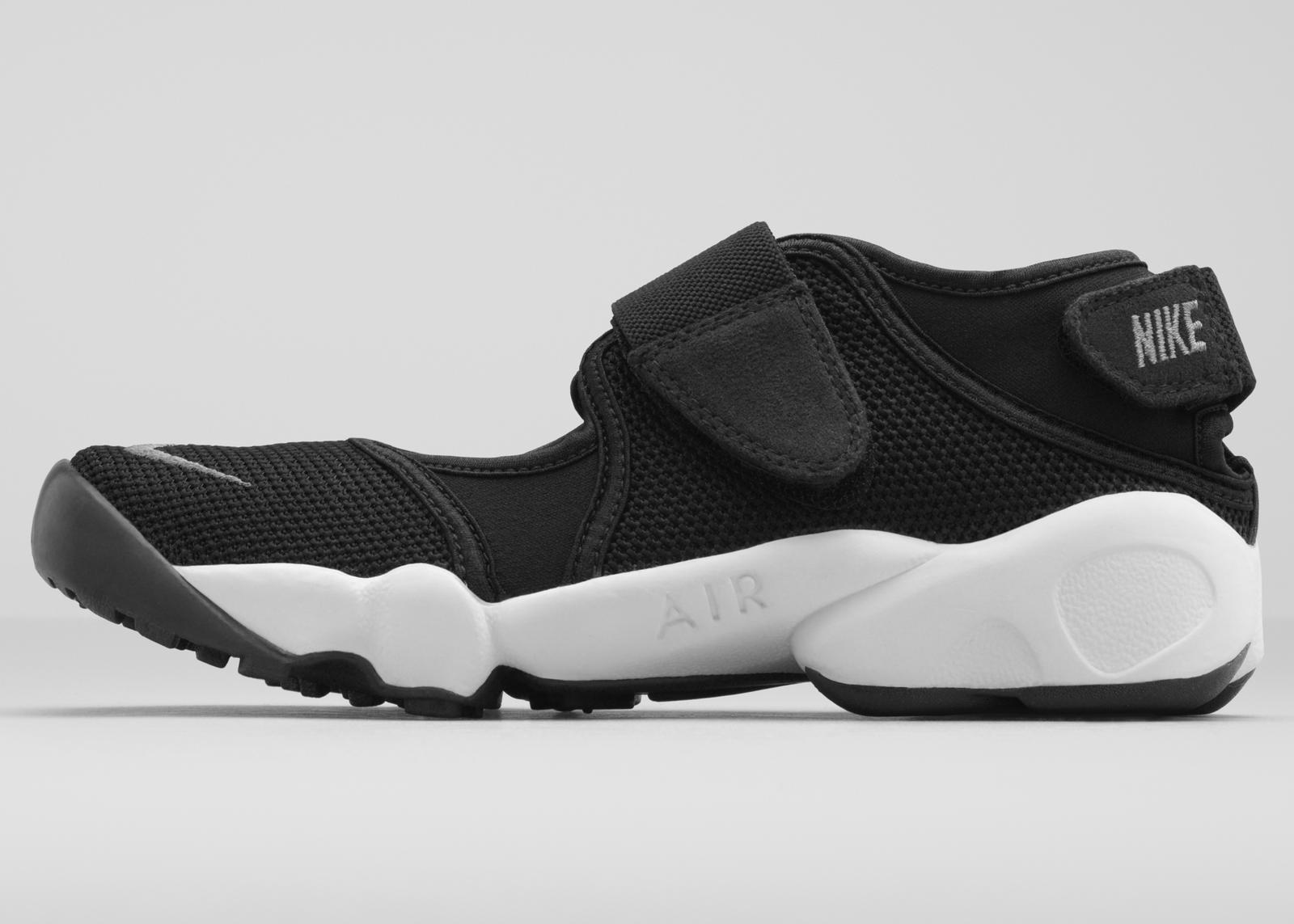 The Nike T/F collection is now available in select Nike retailers and on nike.com/sportswear.