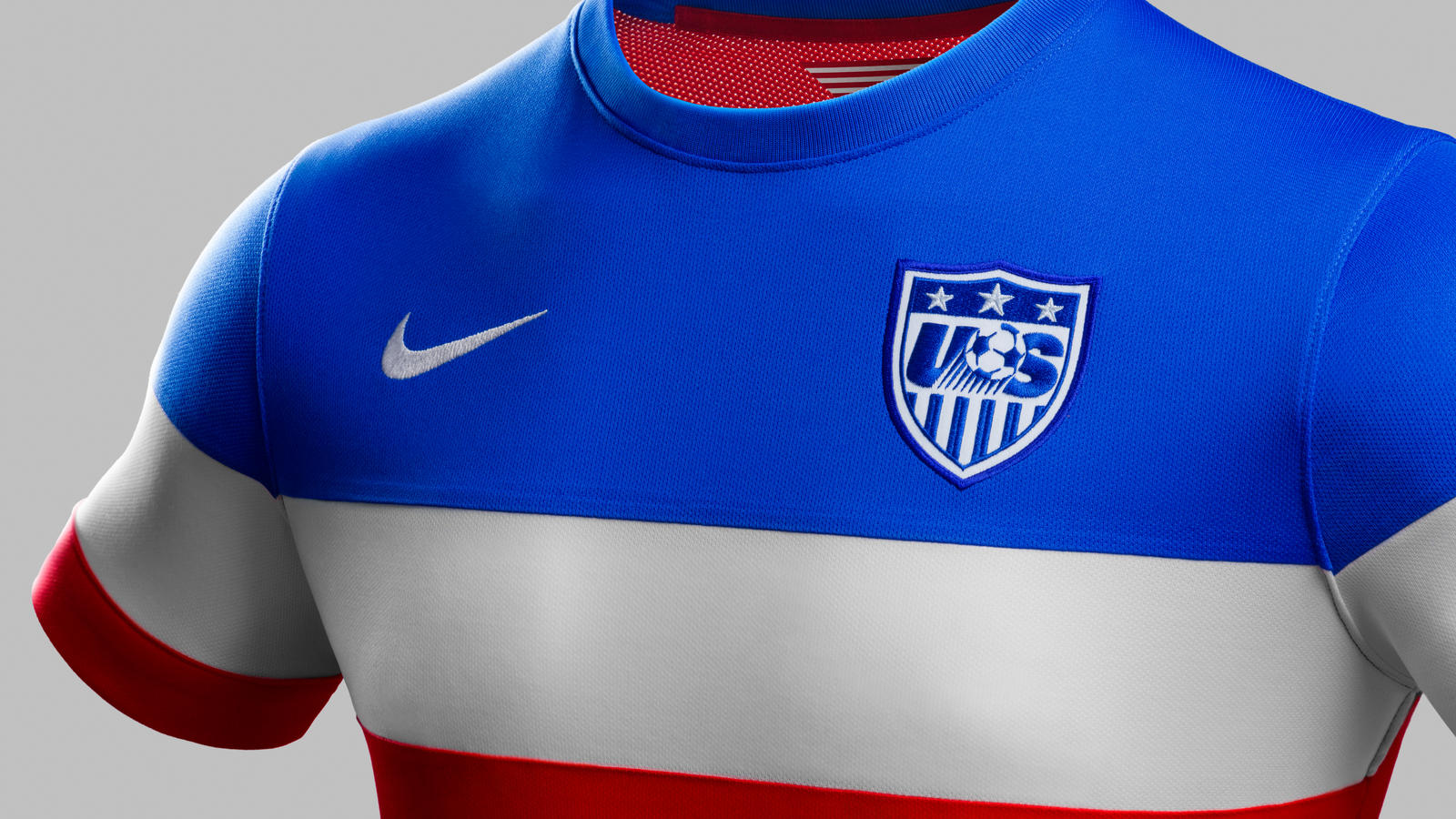 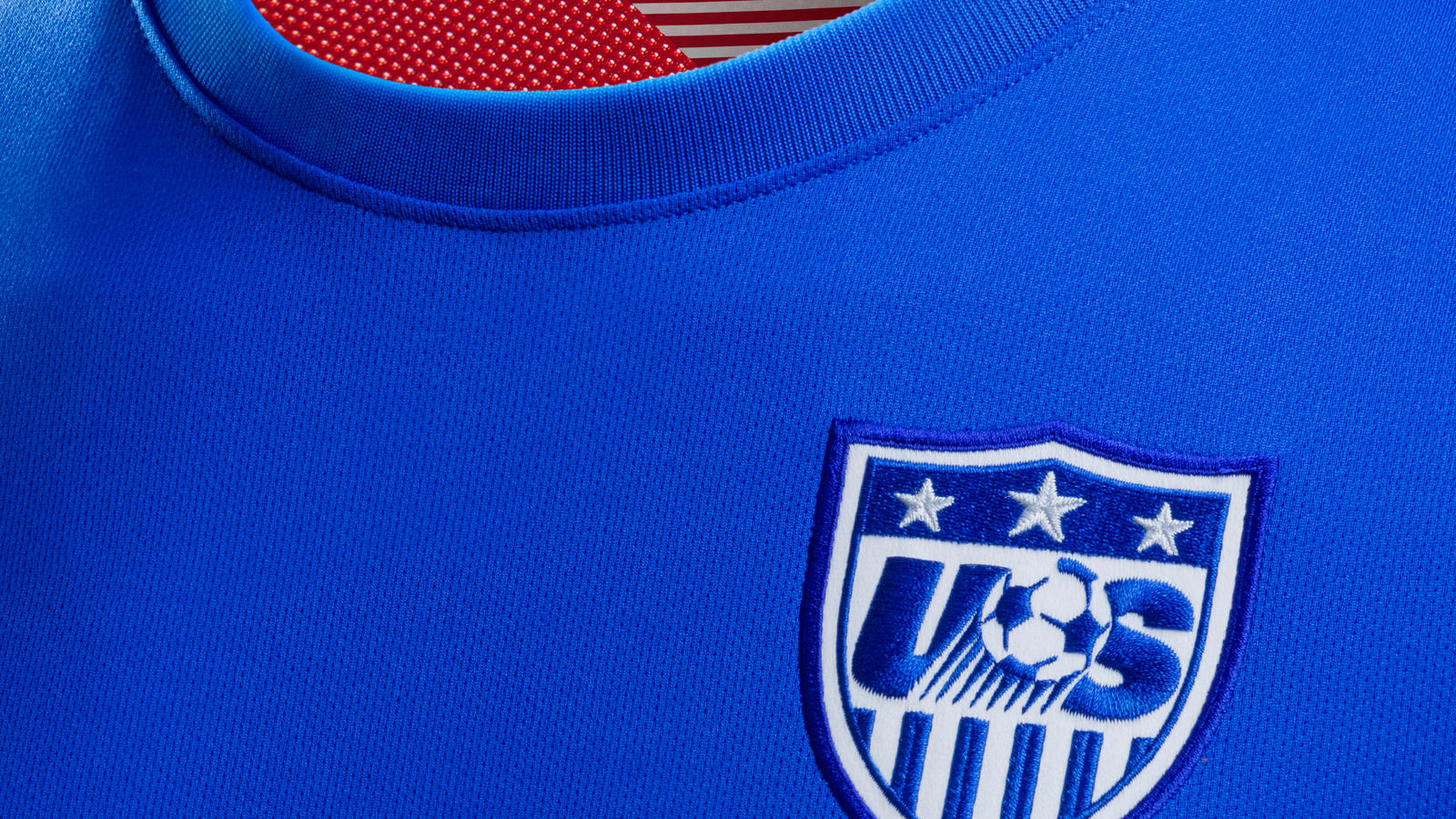 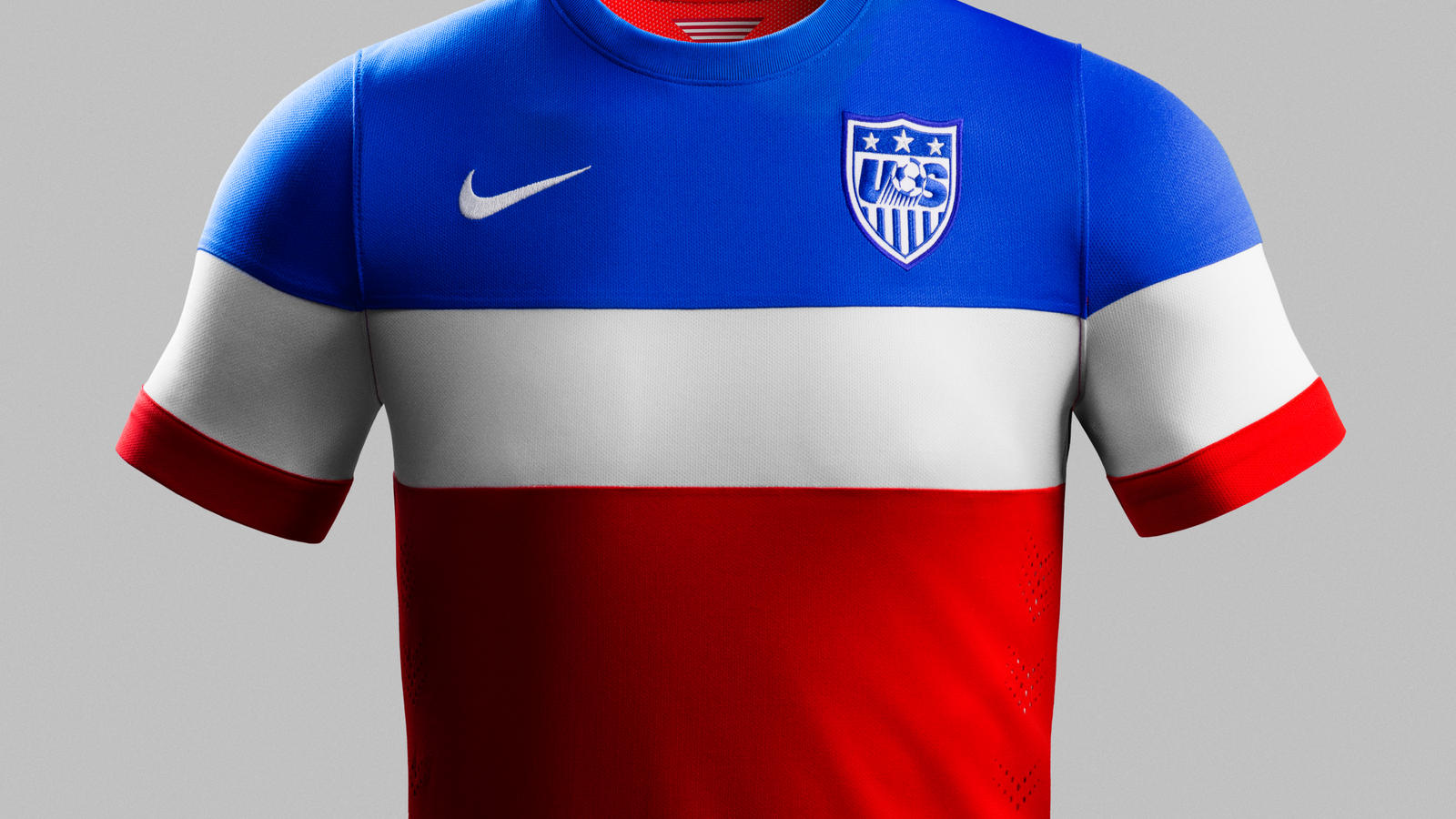 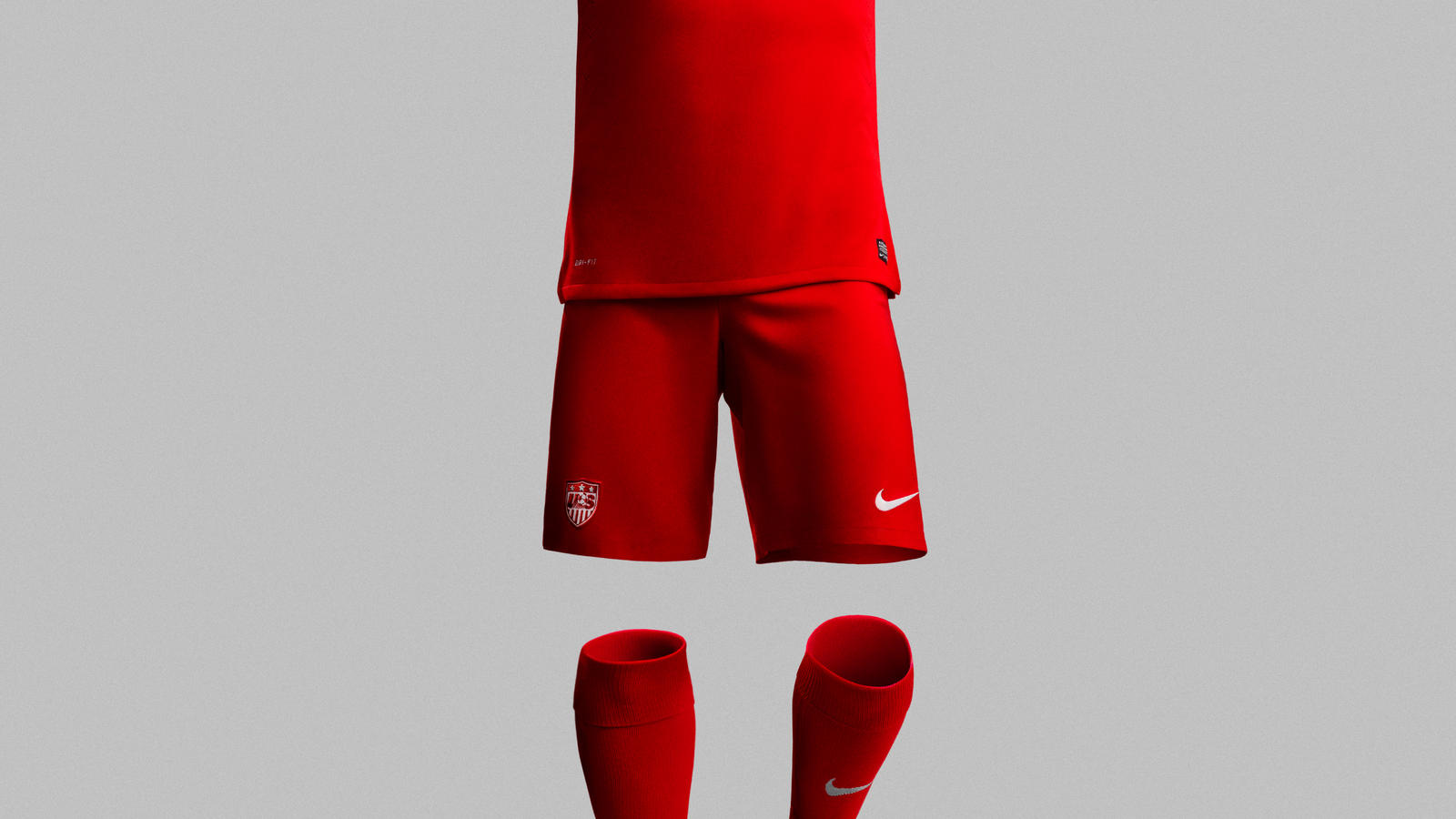 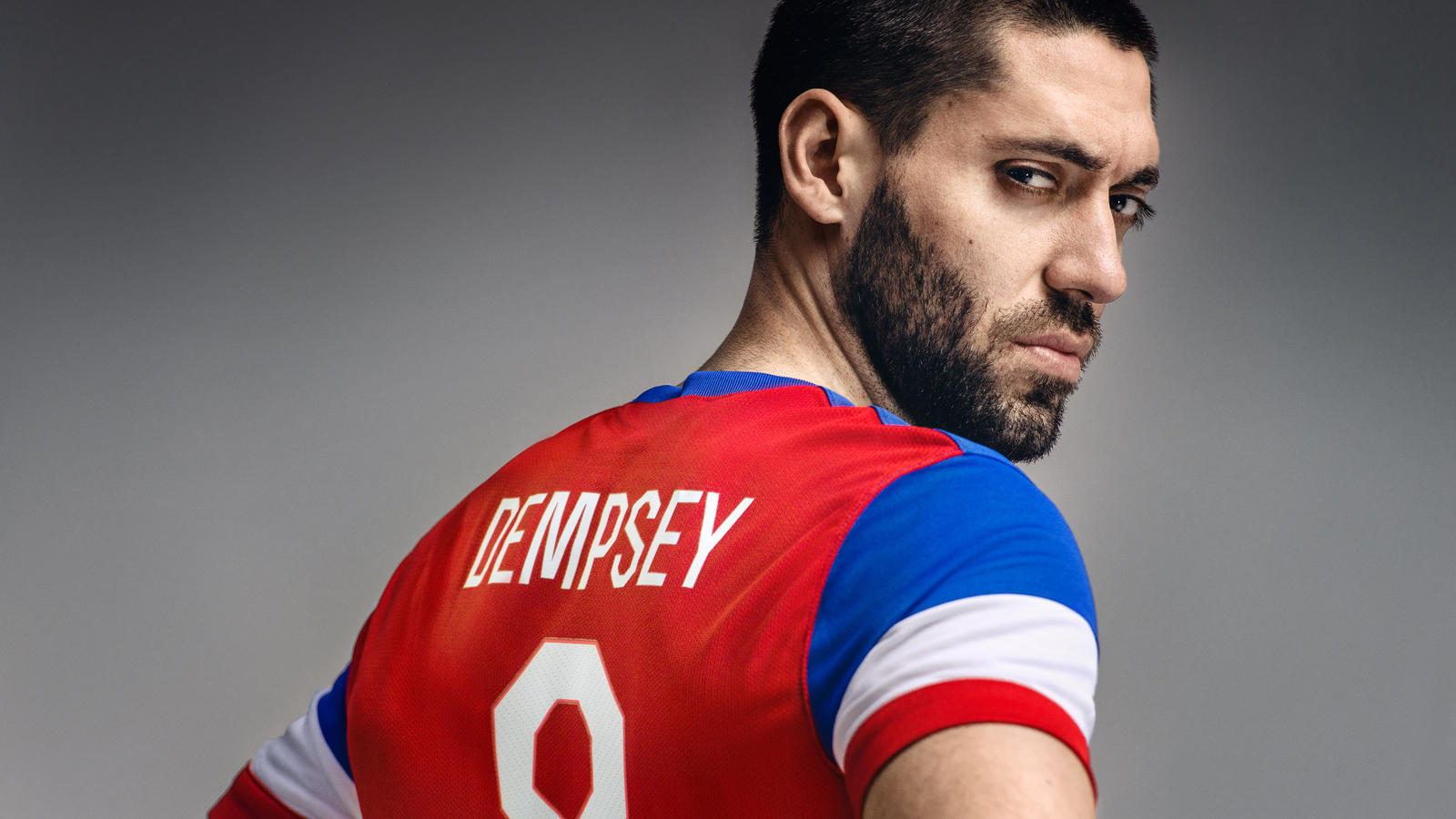 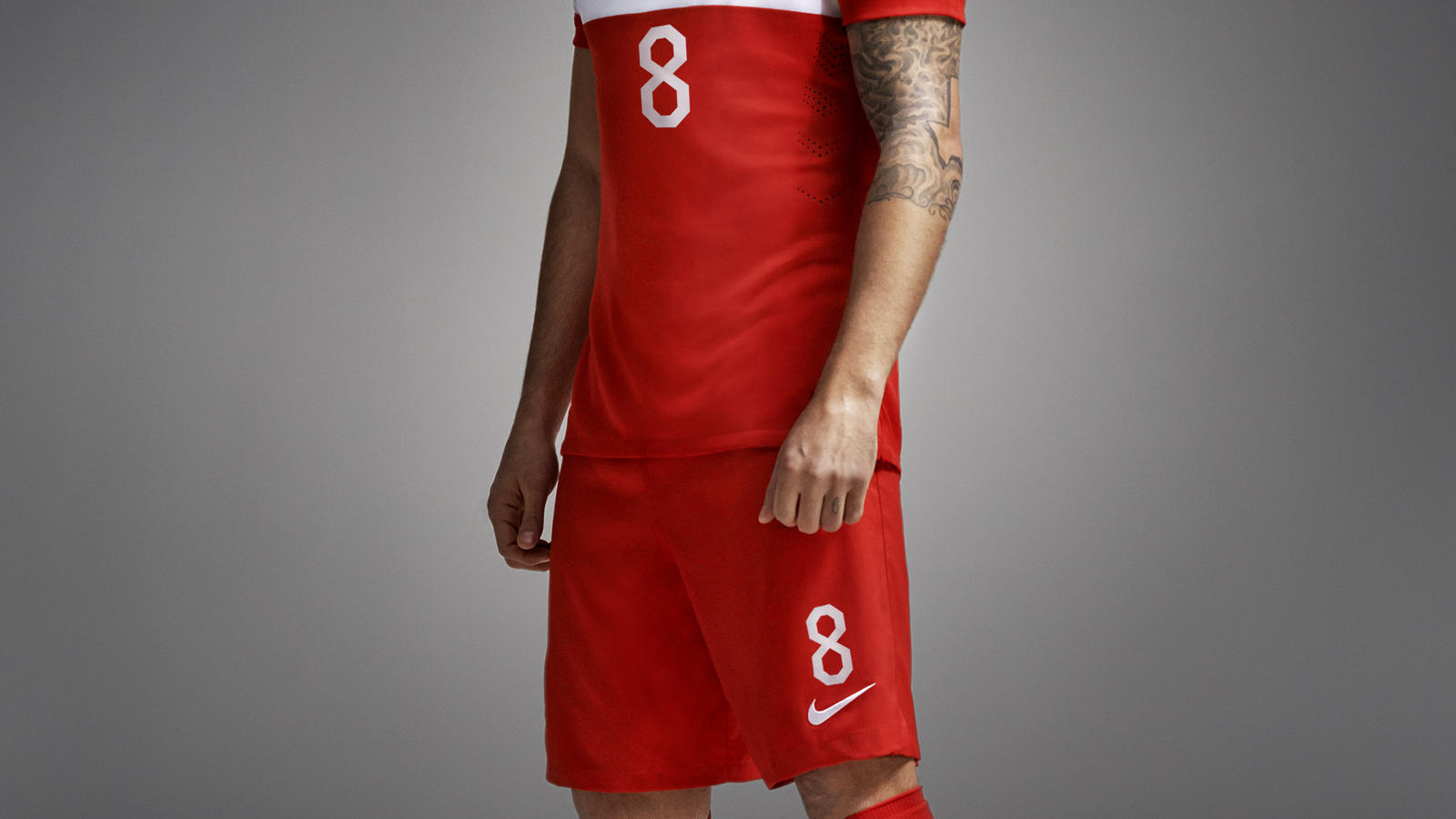 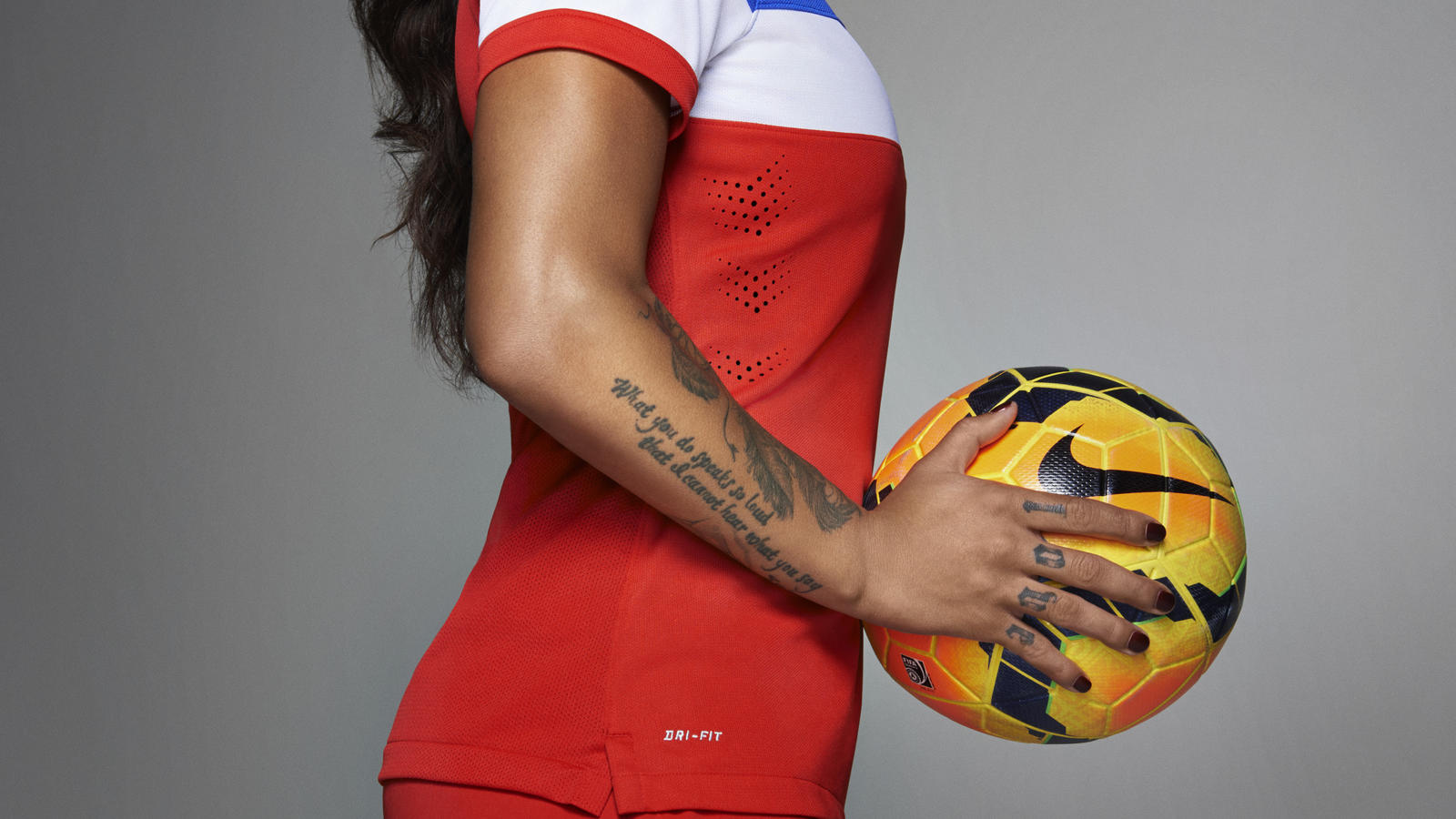 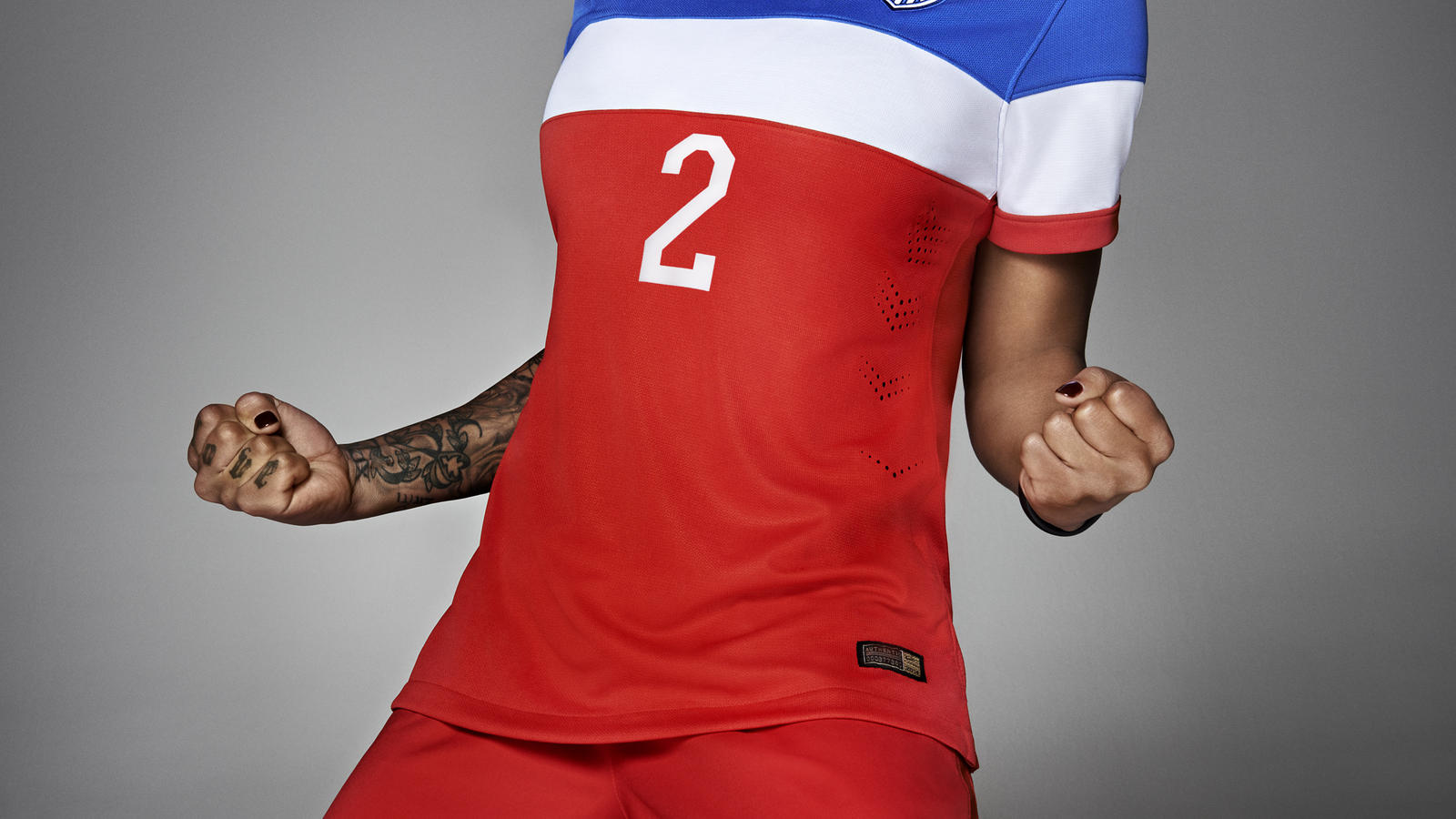 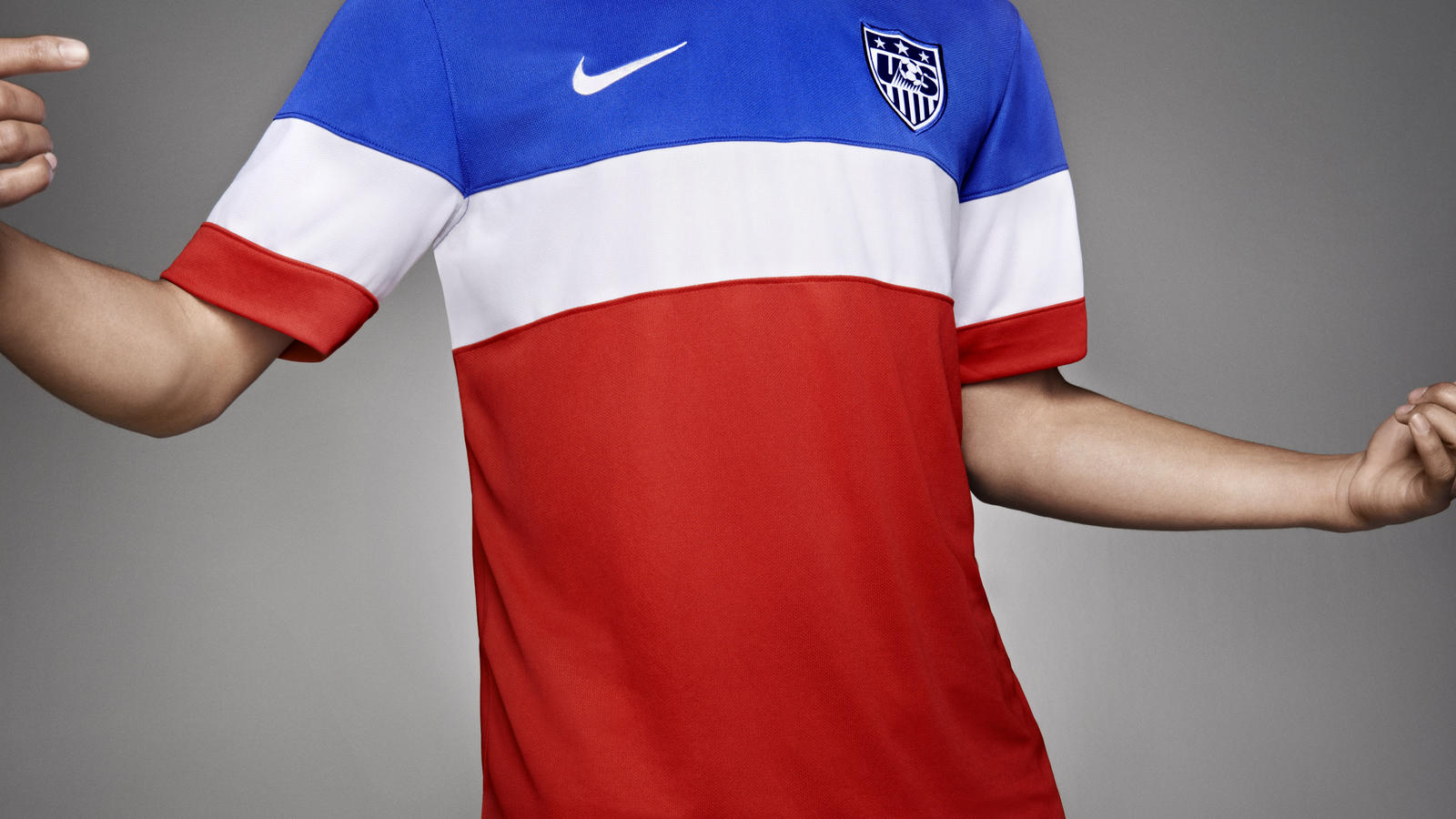 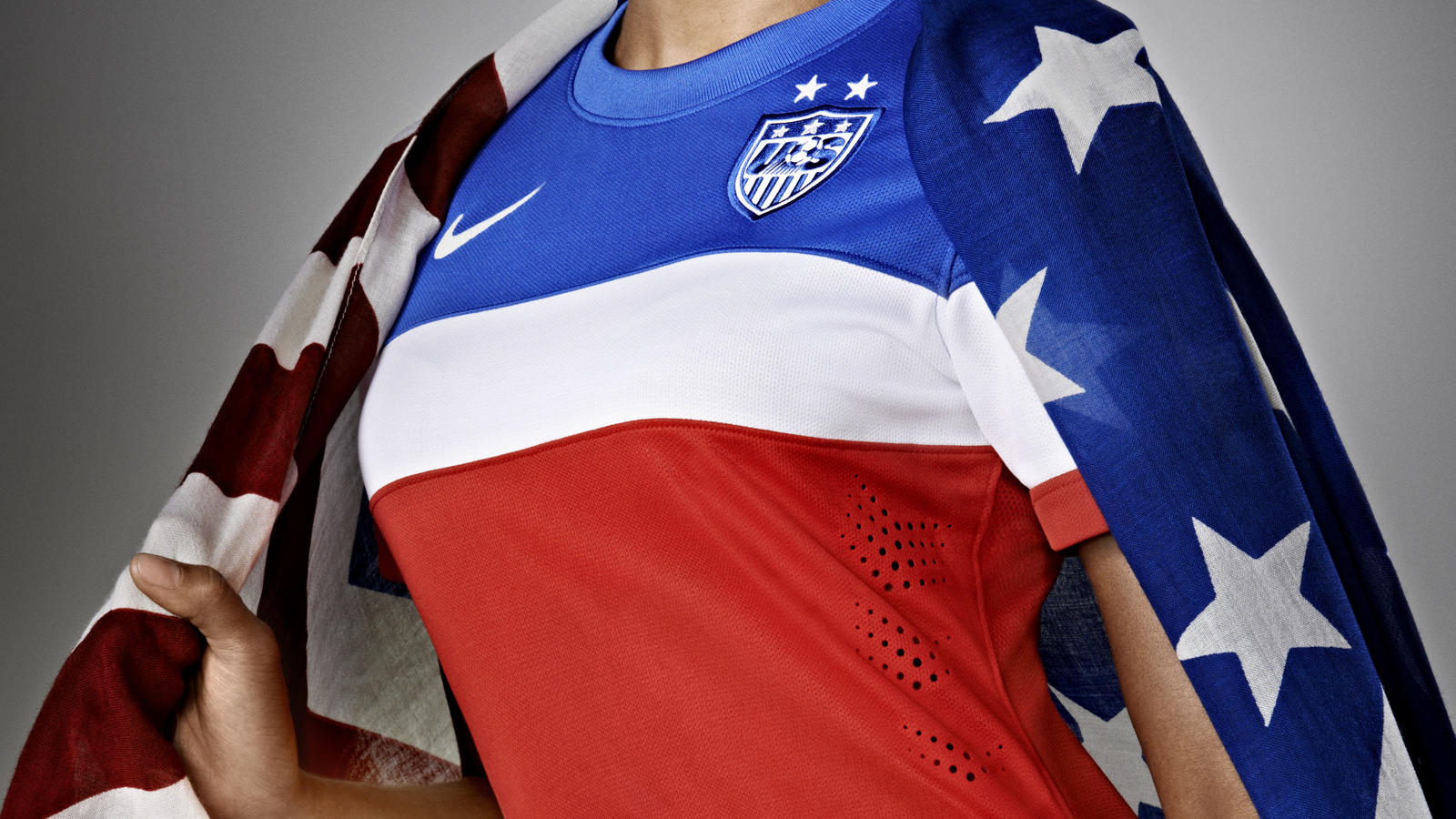 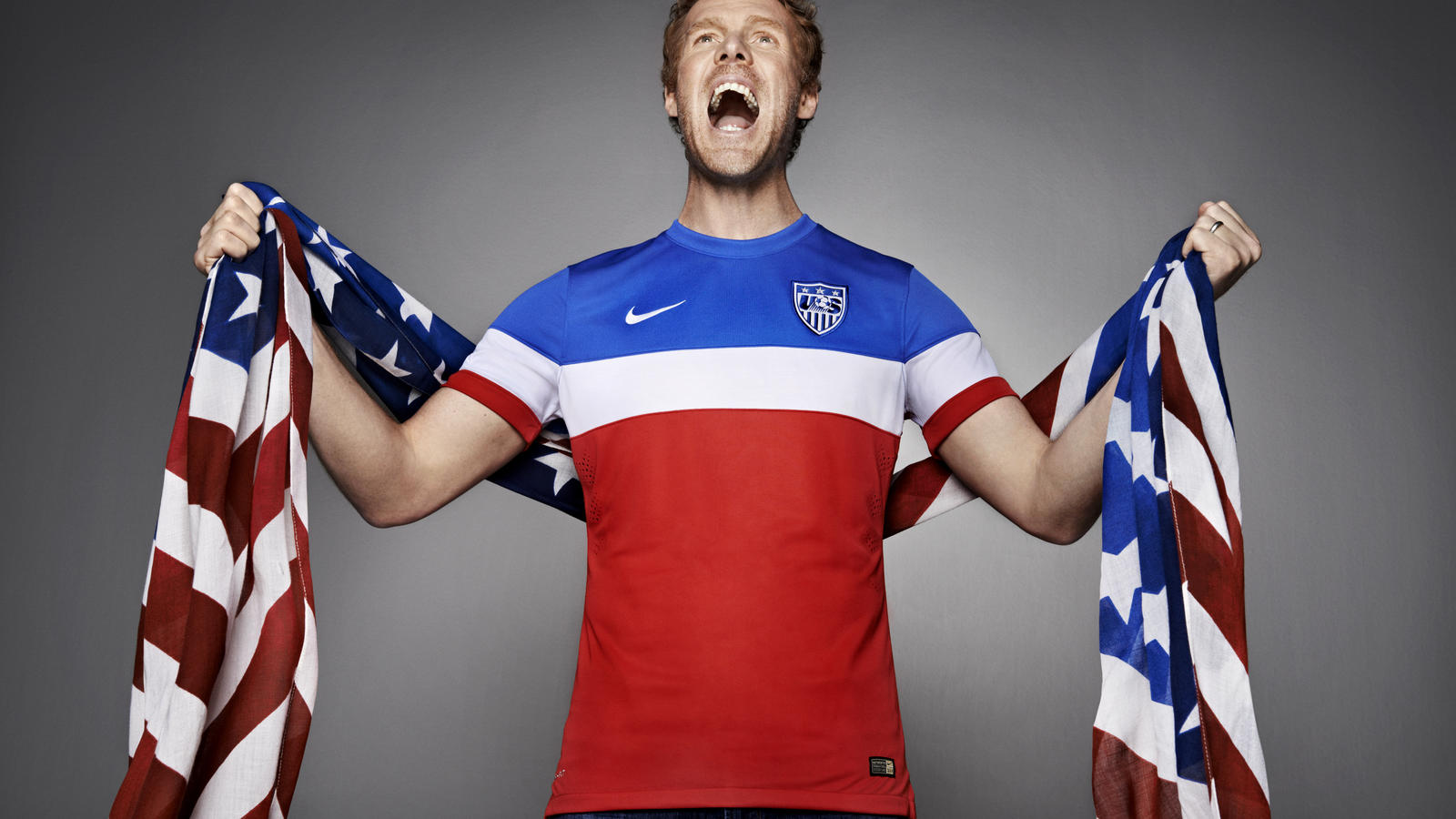 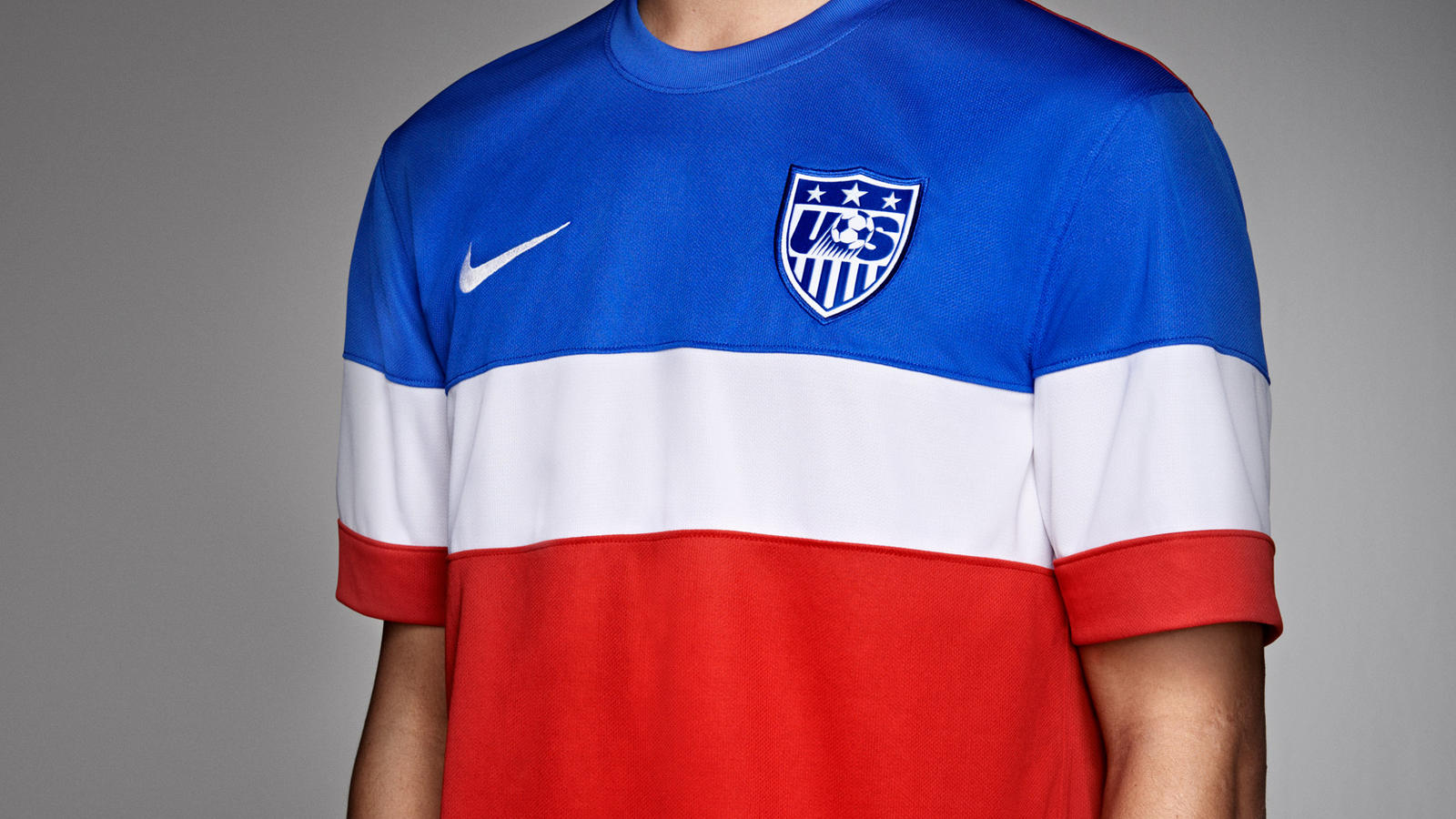 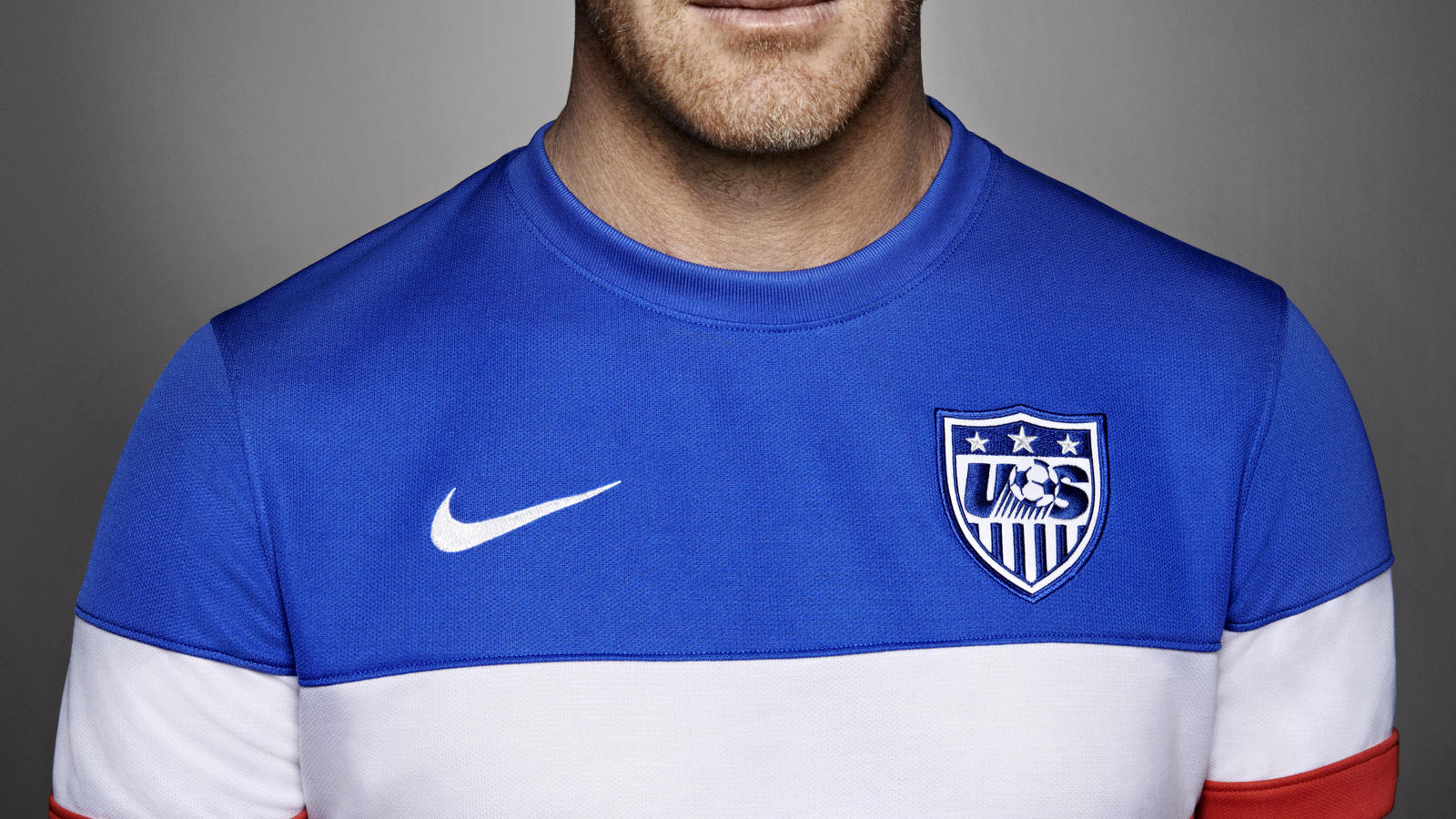 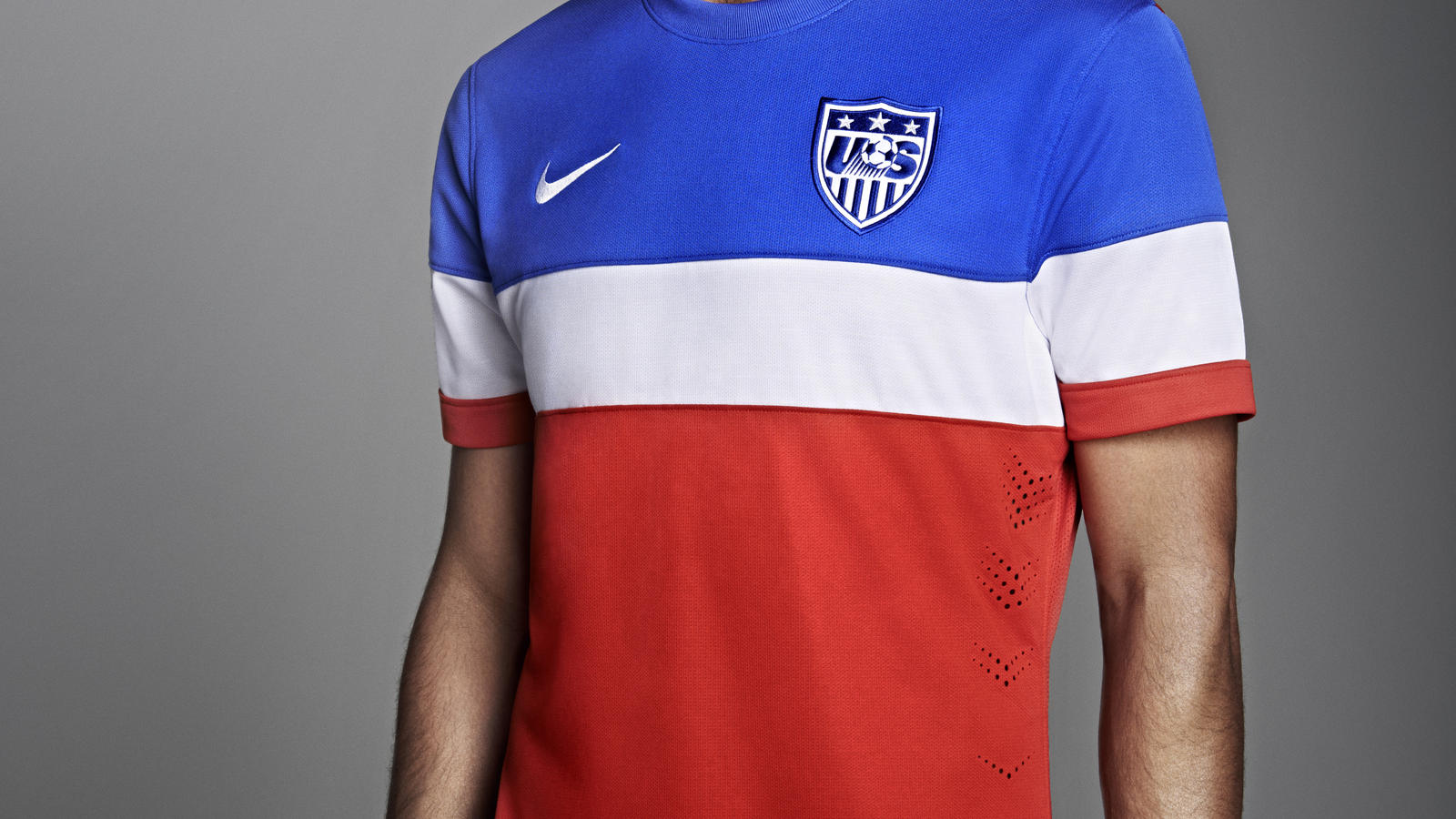 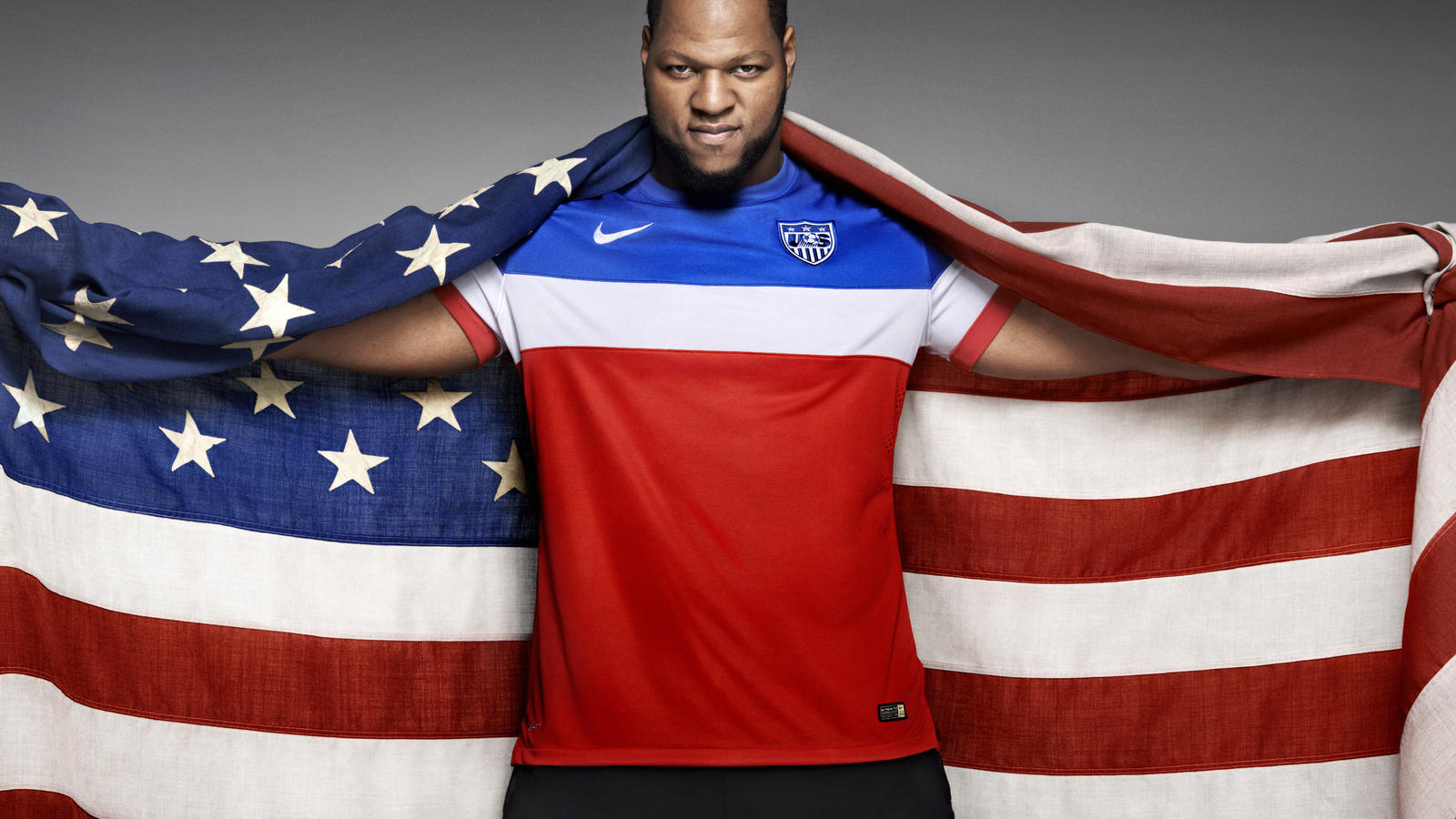 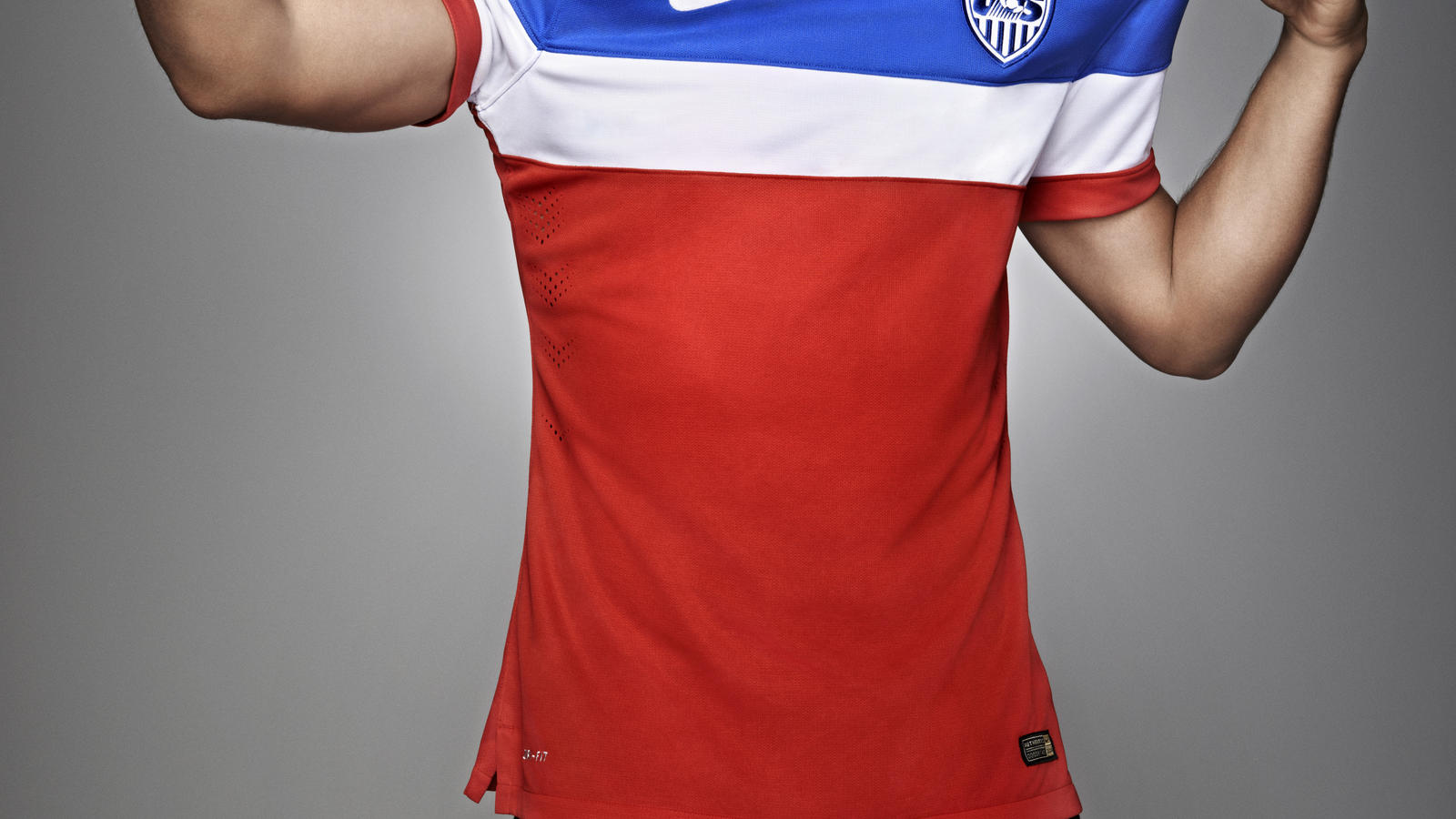 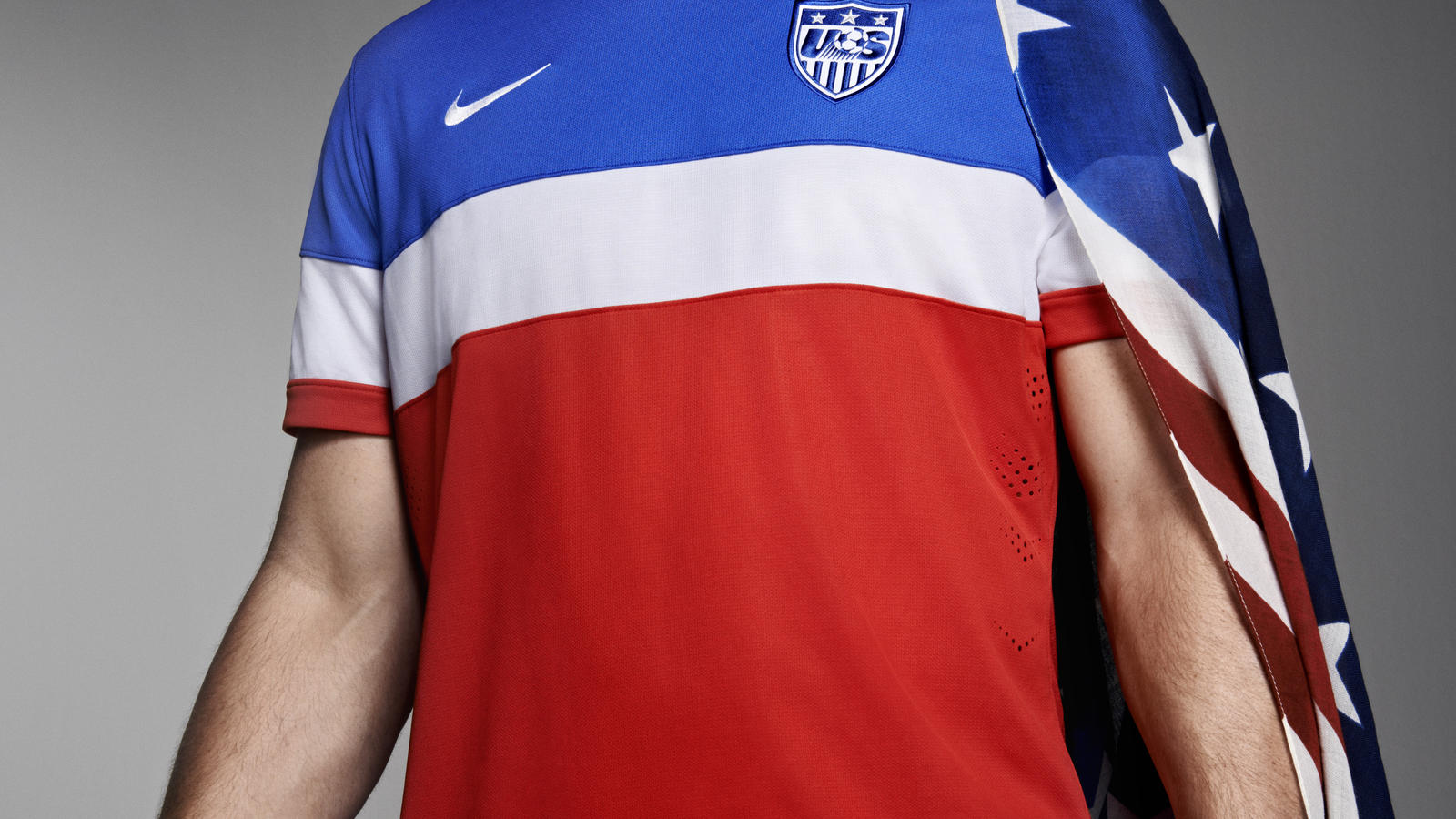 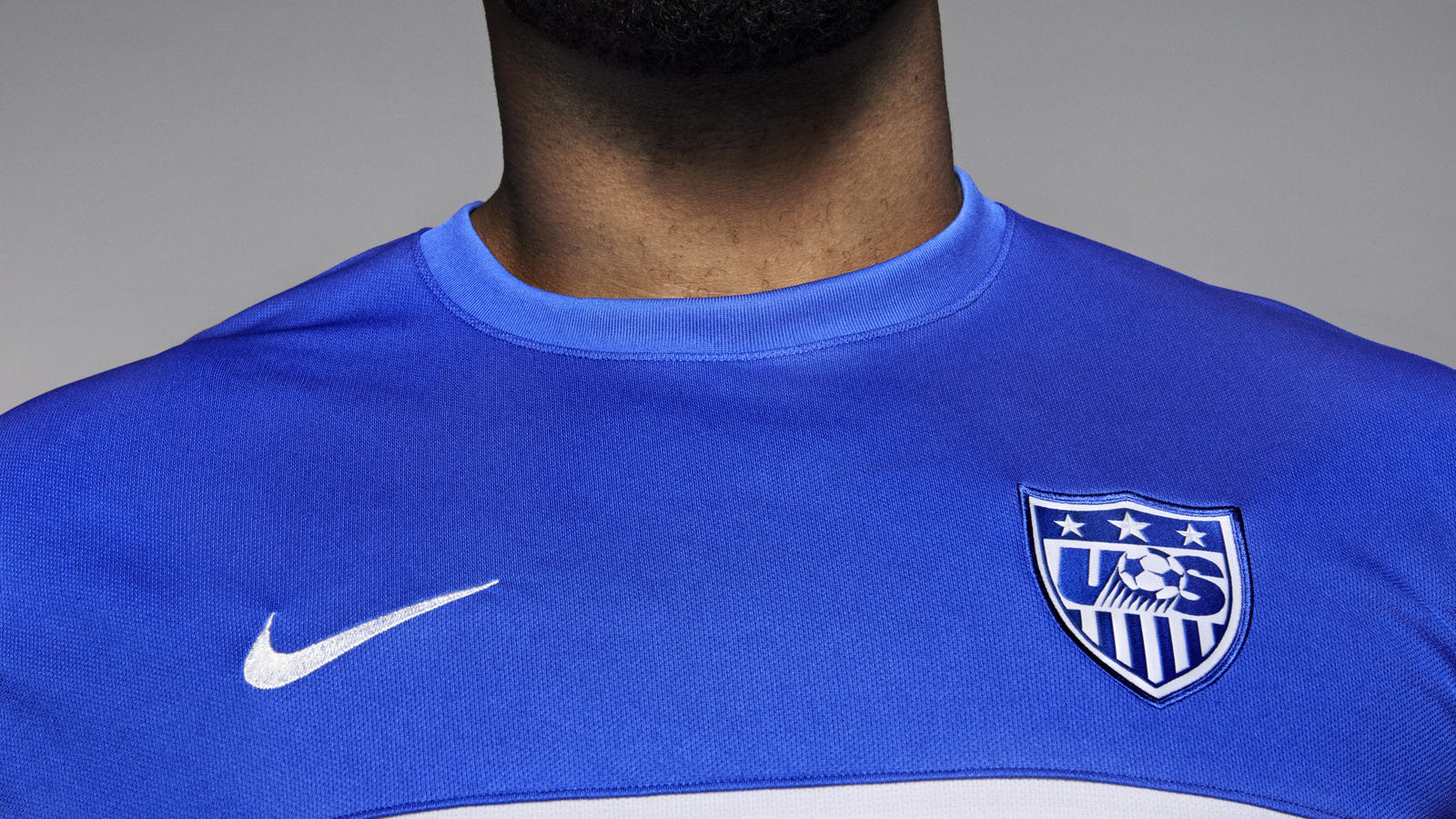 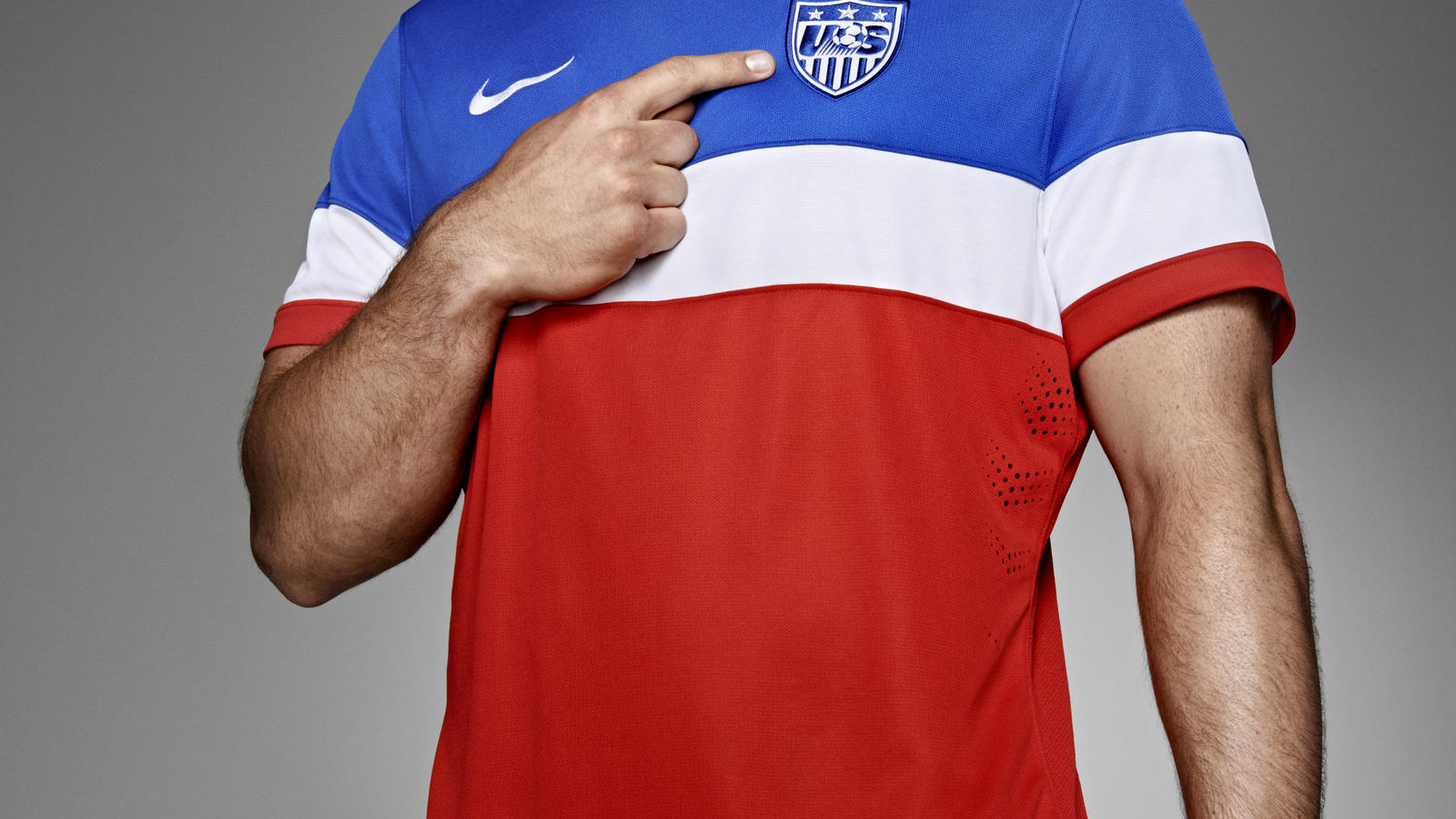 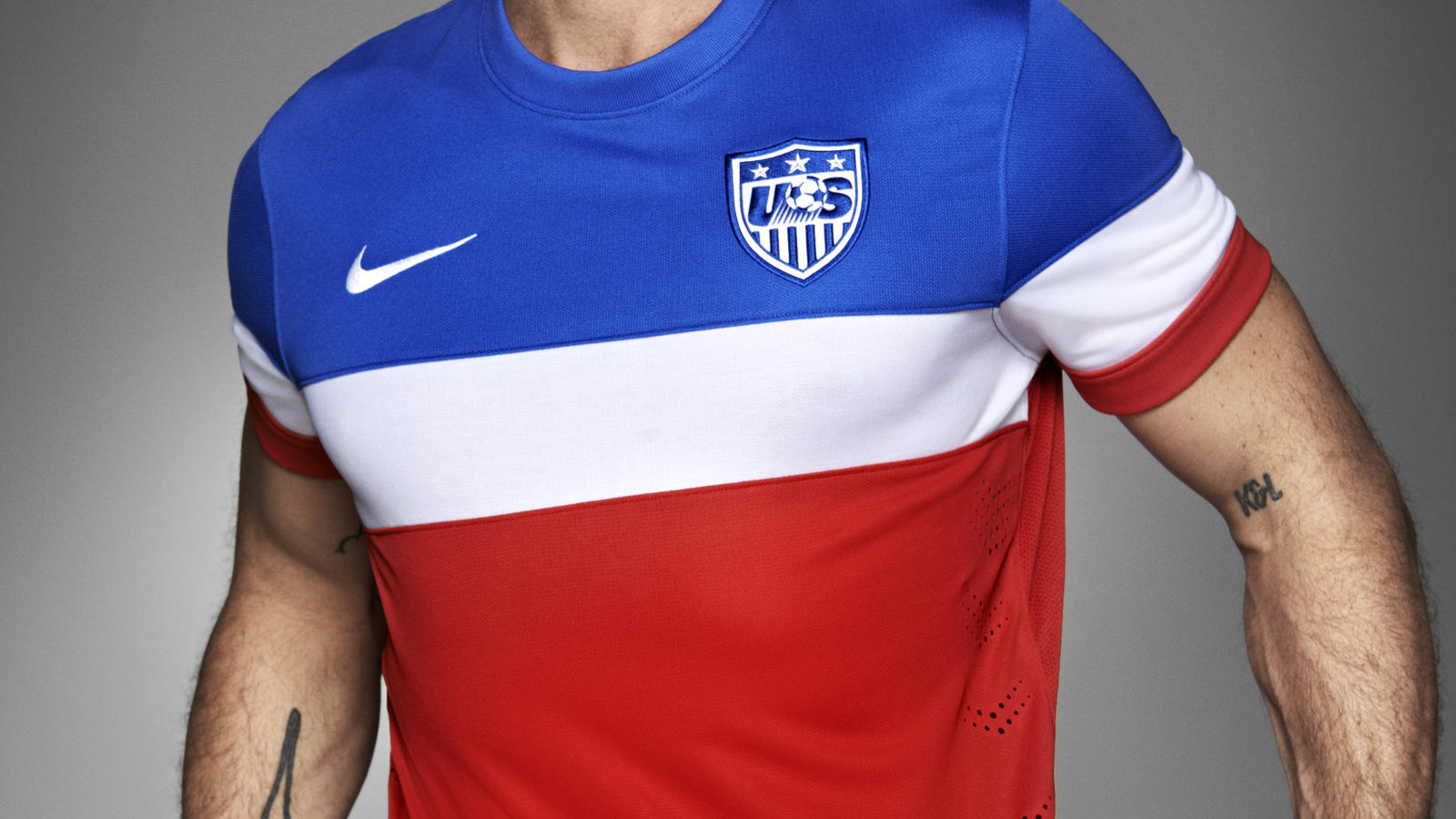 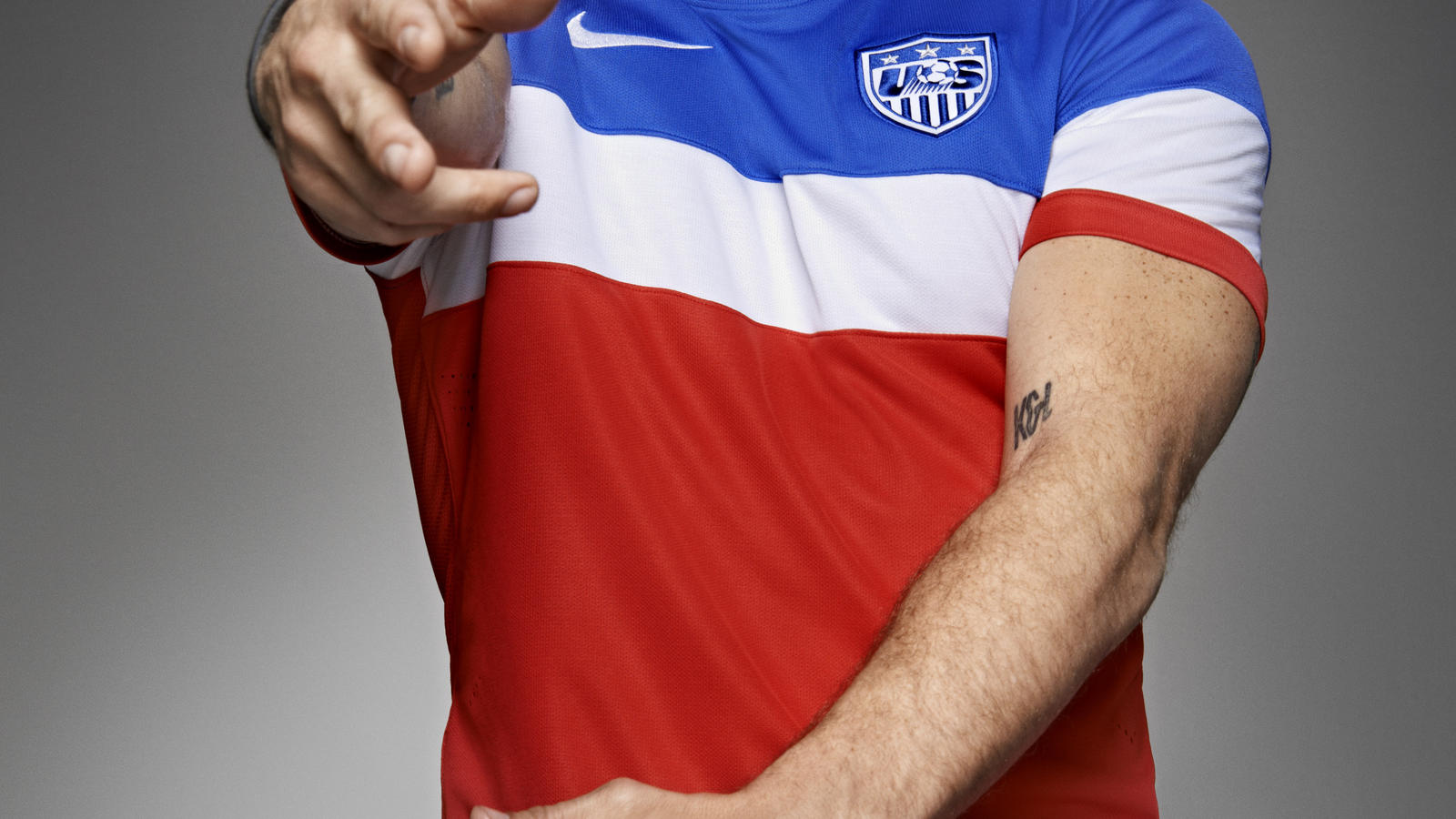 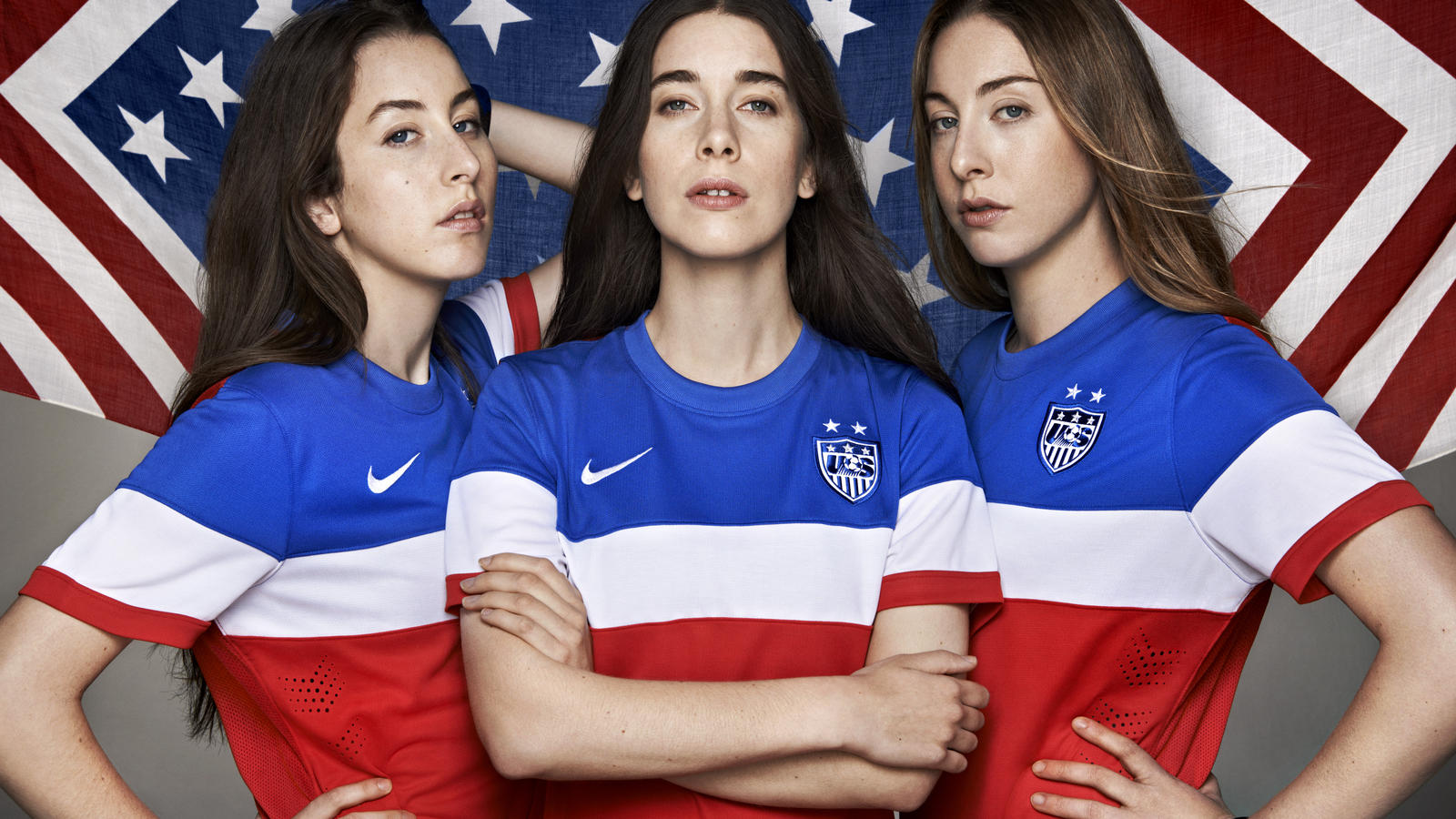 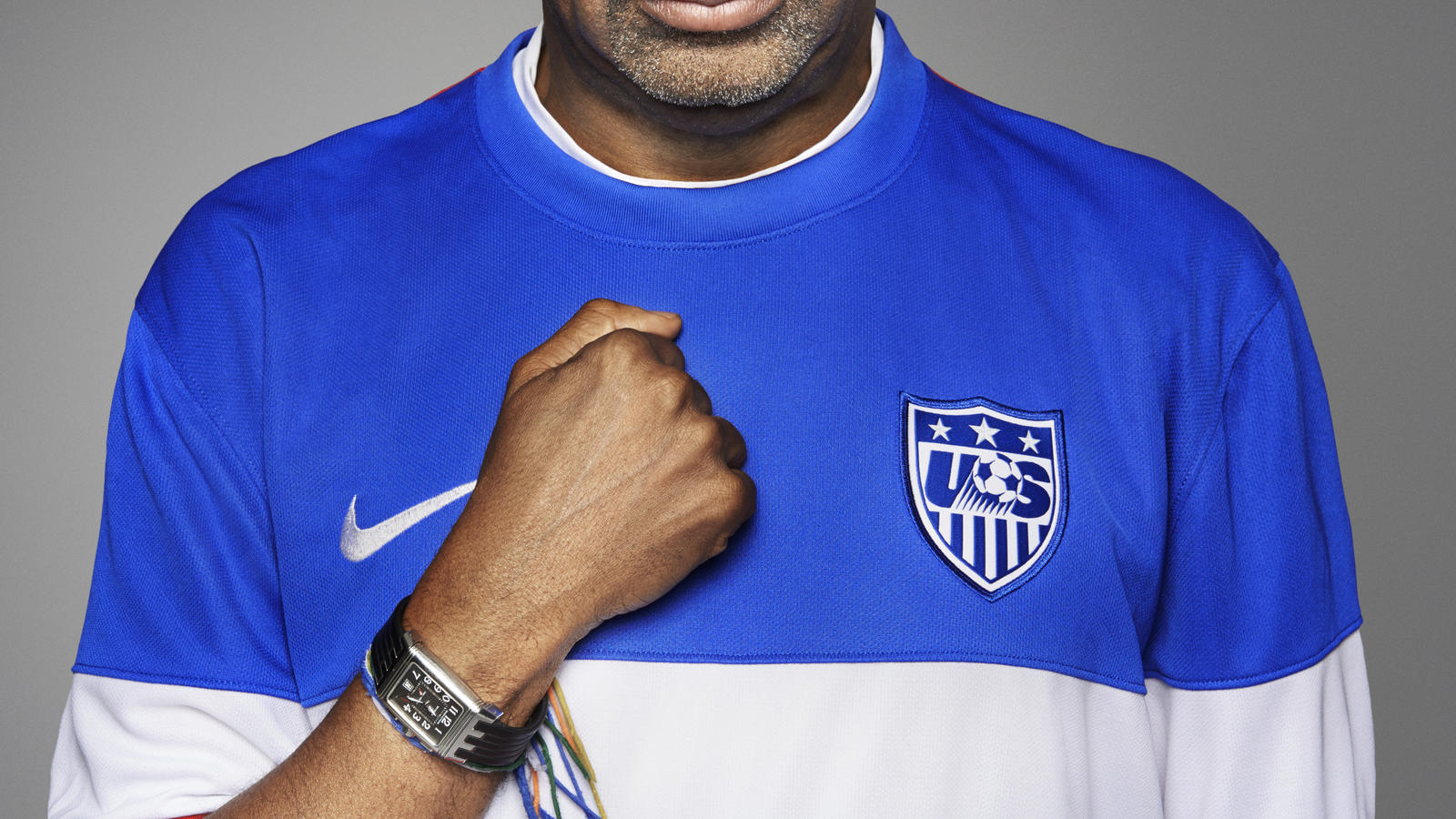 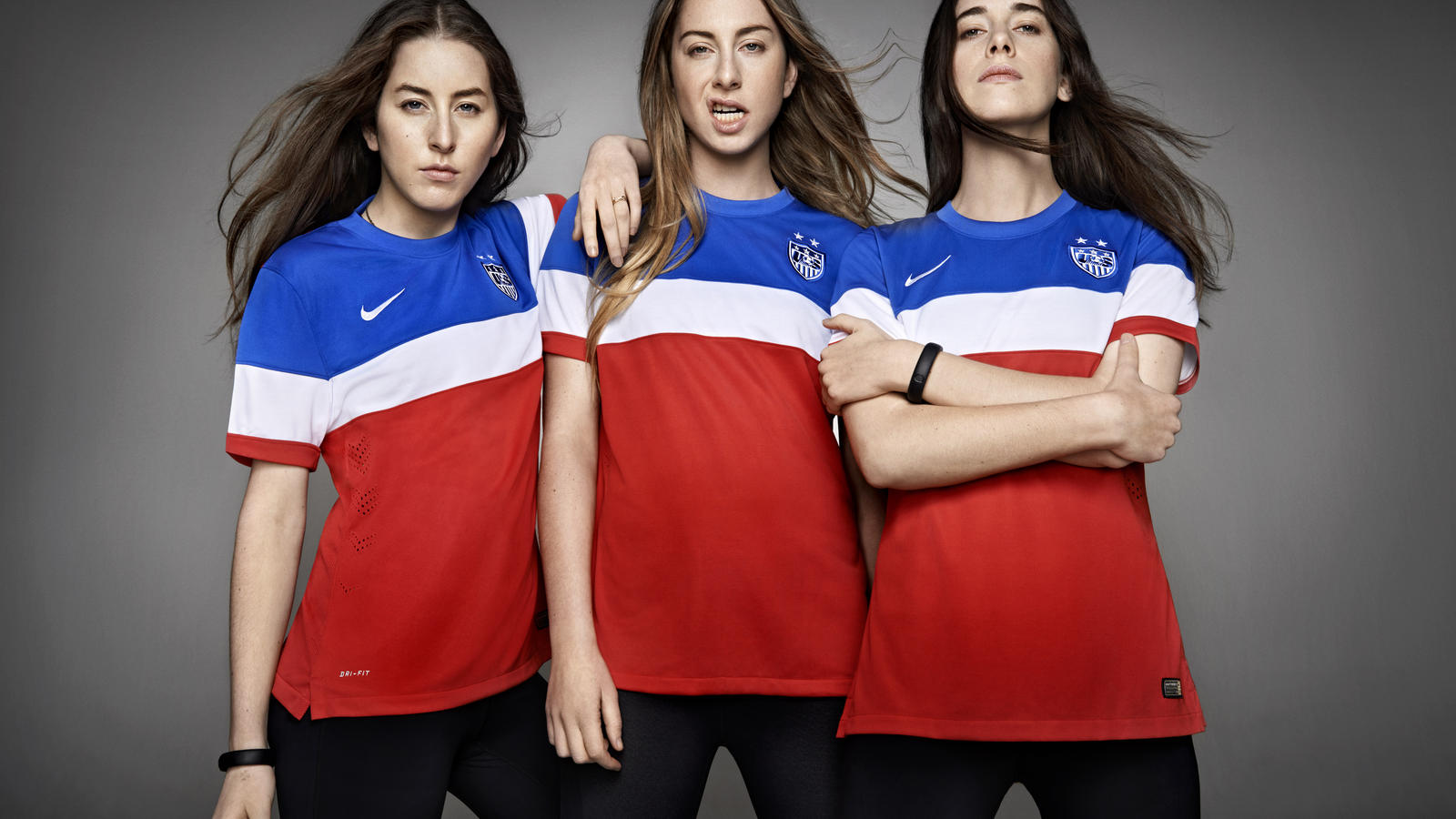 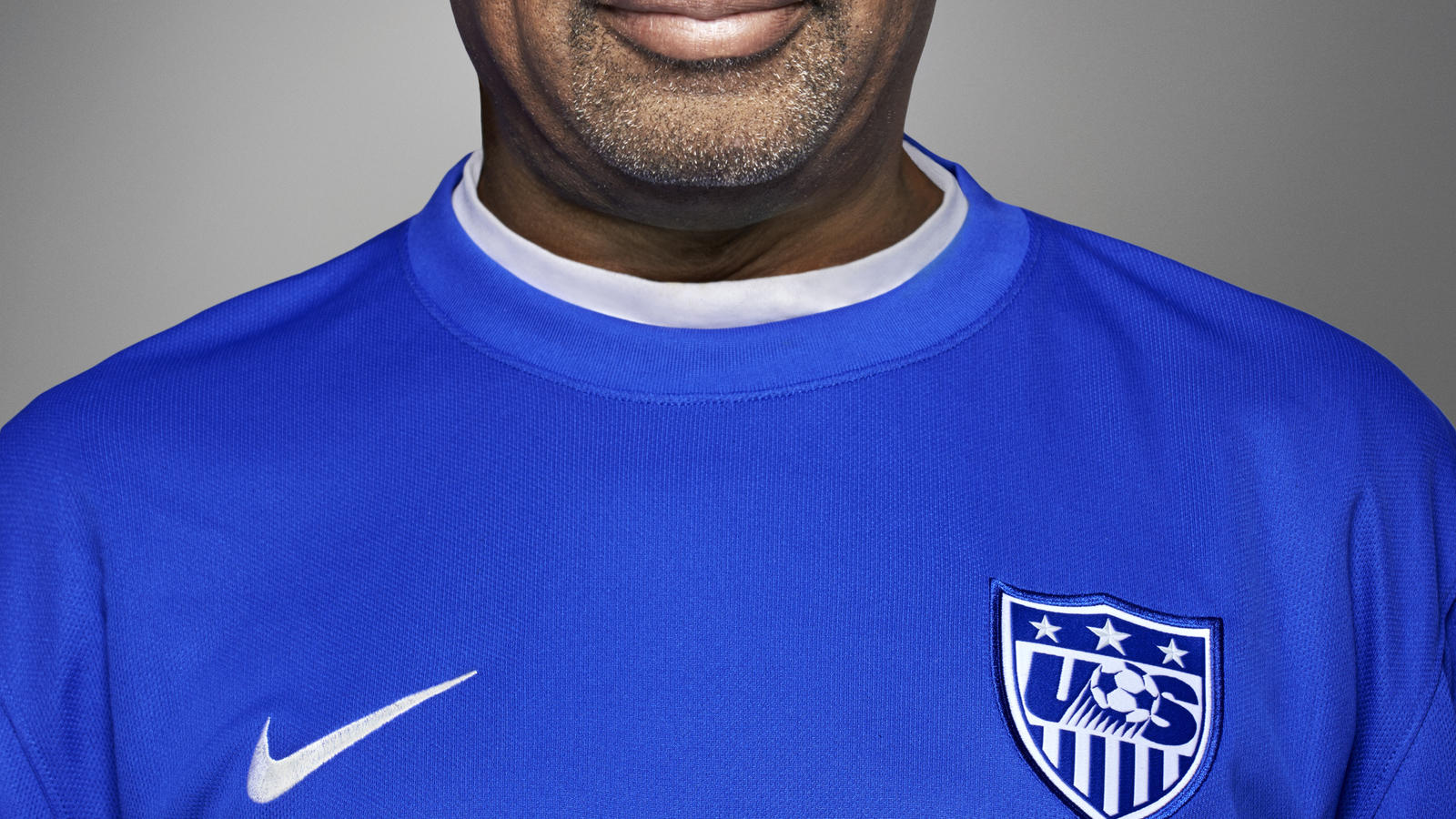 The U.S. Men’s National Soccer Team will compete in Brasil this year in a bold and deeply patriotic new away kit.

The new away jersey has a modern crew-neck collar and consists of three bands representing the colors of the American flag. The base color of the jersey and the cuff of the sleeves feature a prominent red. The upper torso and top sleeves include a bold blue tone, and a white chest band extends over the middle of both sleeves.

Inside the back of the neck is a pennant tab featuring thirteen red and white stripes to represent the original thirteen colonies that declared independence and formed the first states.

“The USA has a profound and passionate pride in their nation,” said Martin Lotti, Global Creative Director for Nike Soccer. “We wanted to create a design that reflects this in a daring and colorful fashion to give them an even more imposing appearance on the pitch.”

“I like the patriotic design and color scheme and I think it will look great on the pitch,” said U.S. Men’s National Team Captain Clint Dempsey. “Hopefully they will serve us well as we head into a competitive group."

The red shorts are slimmer and more tailored to the body, with a cut specifically designed to aid movement and comfort. The center back of the shorts feature Nike’s signature laser vents to aid in cooling and allow for moisture management.

The new away socks are also red, so the color extends impressively from the feet, through the shorts and all the way to the white chest band on the jersey.

“The new kits fit really well, look great and most importantly, are really comfortable, especially when we are running all over the field for 90 minutes in all sorts of different weather,” said U.S. Women’s National Team striker Sydney Leroux. “All of us on the team are environmentally conscious so the fact that it is sustainably designed using recycled Dri-FIT  polyester is also a big plus.”

The new U.S. National Team Away Kit is available at Nike stores and on nike.com beginning April 1.

The kit aids performance by regulating player’s body temperature during the course of the match. By using a combination of Nike Dri-FIT Technology, “burnout” mesh and laser-cut ventilation holes, designers are able to localize cooling where players need it most. Nike Dri-FIT technology pulls moisture away from the skin to the outside of the garment where it evaporates more quickly. Laser-cut ventilation holes and engineered mesh in key areas where heat is generated allow for increased breathability and airflow across the skin.

In addition to keeping players cool, the kit is made with a new dual-knit fabrication that incorporates cotton and recycled polyester for the best in moisture wicking properties, while adding a softer feel and more flattering shape.

In line with Nike’s commitment to superior performance with lower environmental impact, the shirt, shorts—and for the first time in a national team kit, the socks—all feature fabric made from recycled plastic bottles (100 percent recycled polyester in the shorts, 96 percent recycled polyester in the shirt and 78 percent in the socks). Each kit is made using an average of 18 recycled plastic bottles. Since 2010, Nike has diverted almost two billion bottles from landfills, enough to cover over 2,800 full-sized soccer pitches.

Designers used three-dimensional body scans of elite footballers to collect data on the form of today’s players and identify an updated fit, improving comfort and allowing the body to move more naturally within the kit.

While looking at every element of the modern soccer kit, Nike designers even paid special attention to the kit’s socks. Combining athlete insight and research with new materials and fabrications, the Nike Elite Match Fit Sock for 2014 features a sleeker fit specific to football.

Strategically cushioned zones provide comfort and protection at the big toe and anklebones where the majority of impact occurs, while arch support locks down the foot to prevent slipping. Material was also eliminated to enhance touch and decrease bulk, and flex grooves were added to the ankle and the top of the foot to help prevent bunching.

The new Nike Pro baselayer is the lightest ever from Nike and features increased venting and breathability. Players have a variety of Nike Pro baselayer styles to choose from. These are designed for the varying temperatures and conditions that athletes will encounter in Brazil, which are expected to vary from high heat during midday matches, to much colder temperatures in the southern locations during evening games.

Nike has redesigned its baselayer shorts for 2014 taking insights directly from some of the best players in the world.

“When we asked players to talk about the kind of protection they need during a match, they showed us scars and abrasions on their upper-back hip area from sliding,” recalled Lotti. "Several players showed us these same injuries so we set out to add more protection, while balancing the need for lightweight fabrics and breathability.”

The result is the Nike Pro Combat Ultralight Slider Shorts.  Featuring increased and adjusted protection to match the athlete’s sliding pattern, the shorts are also 20 percent lighter than previous versions and made with 87 percent recycled polyester. Weight was eliminated through the addition of mesh for increased breathability and cooling where the athlete generates heat.