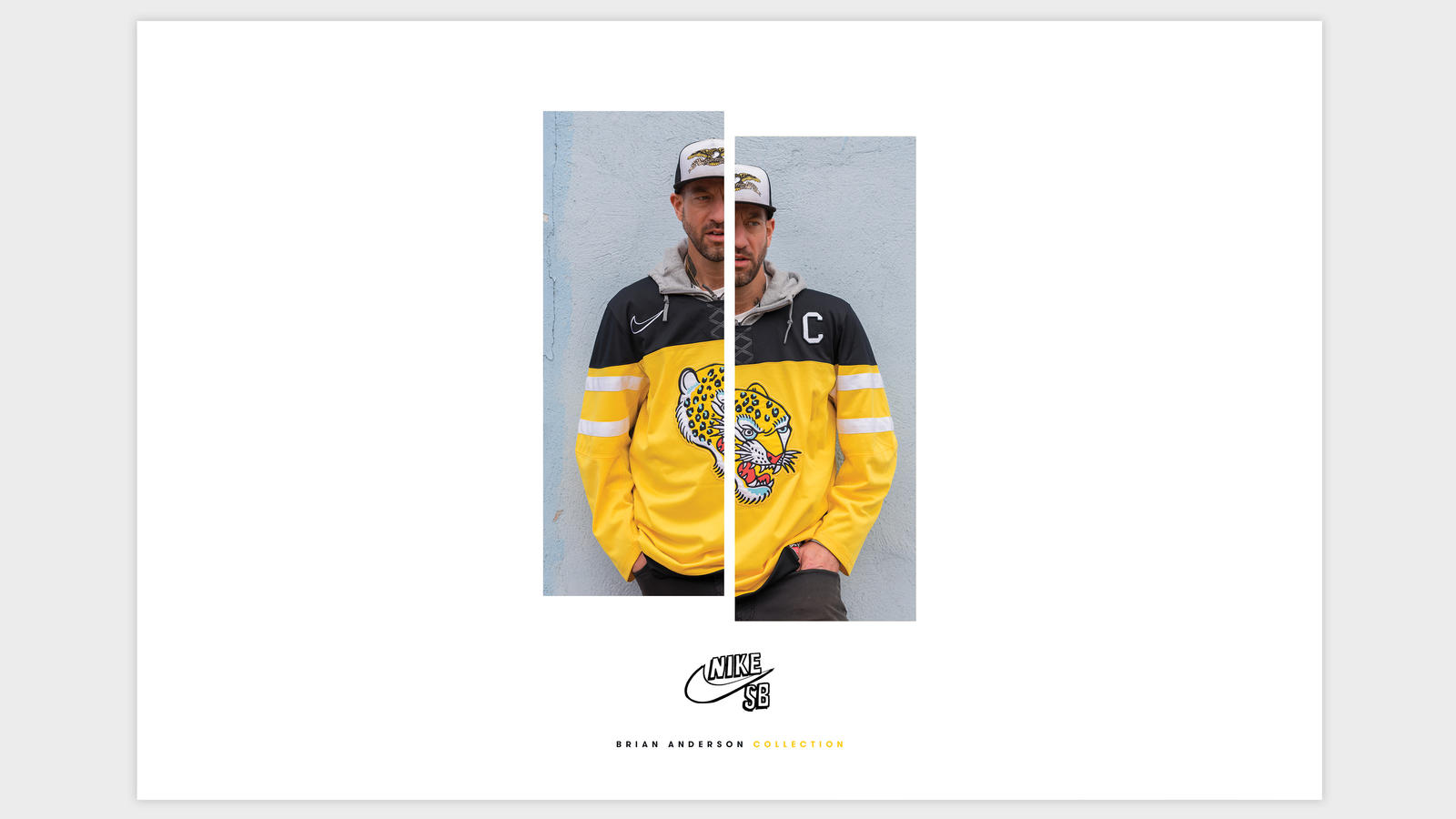 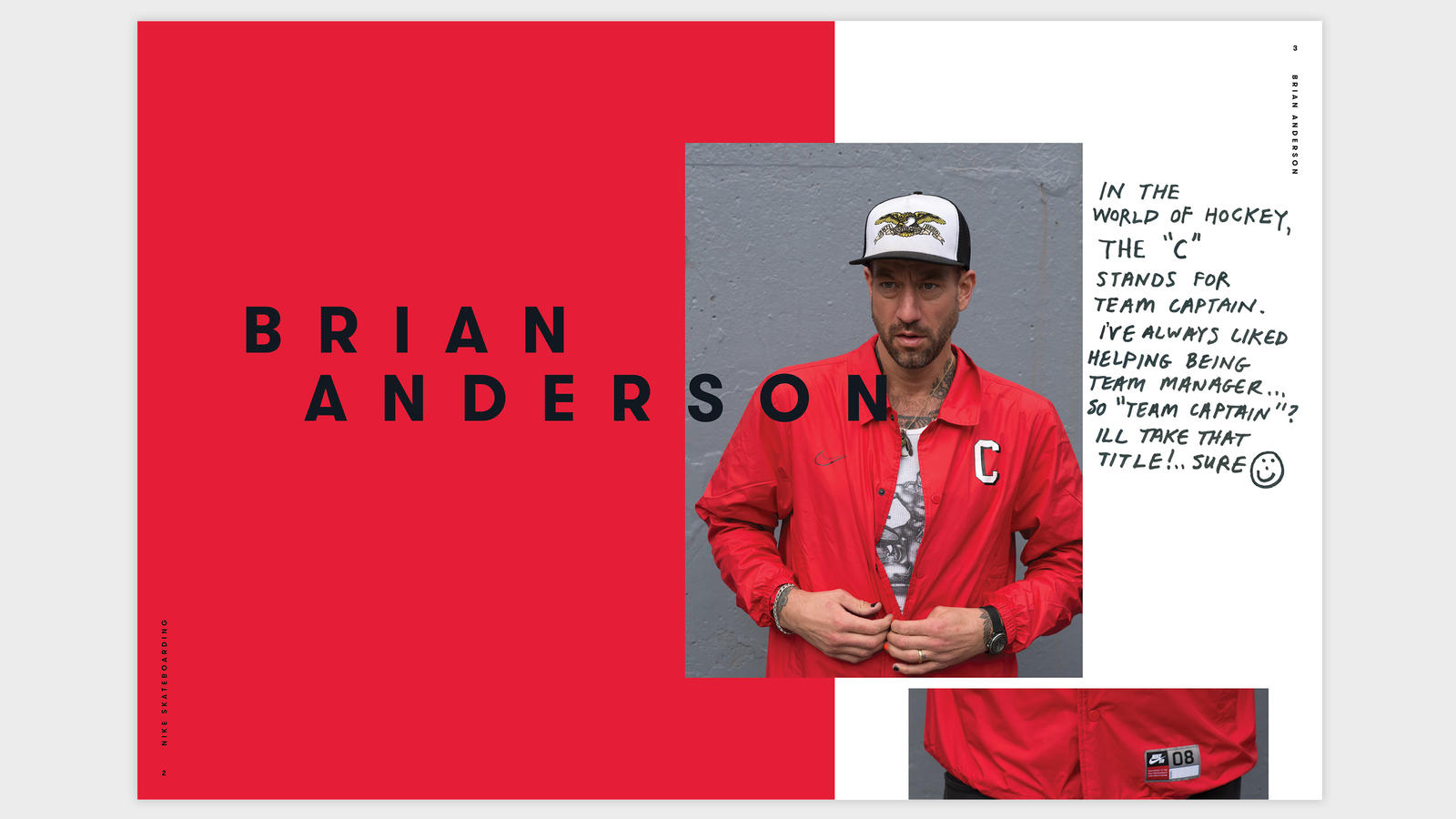 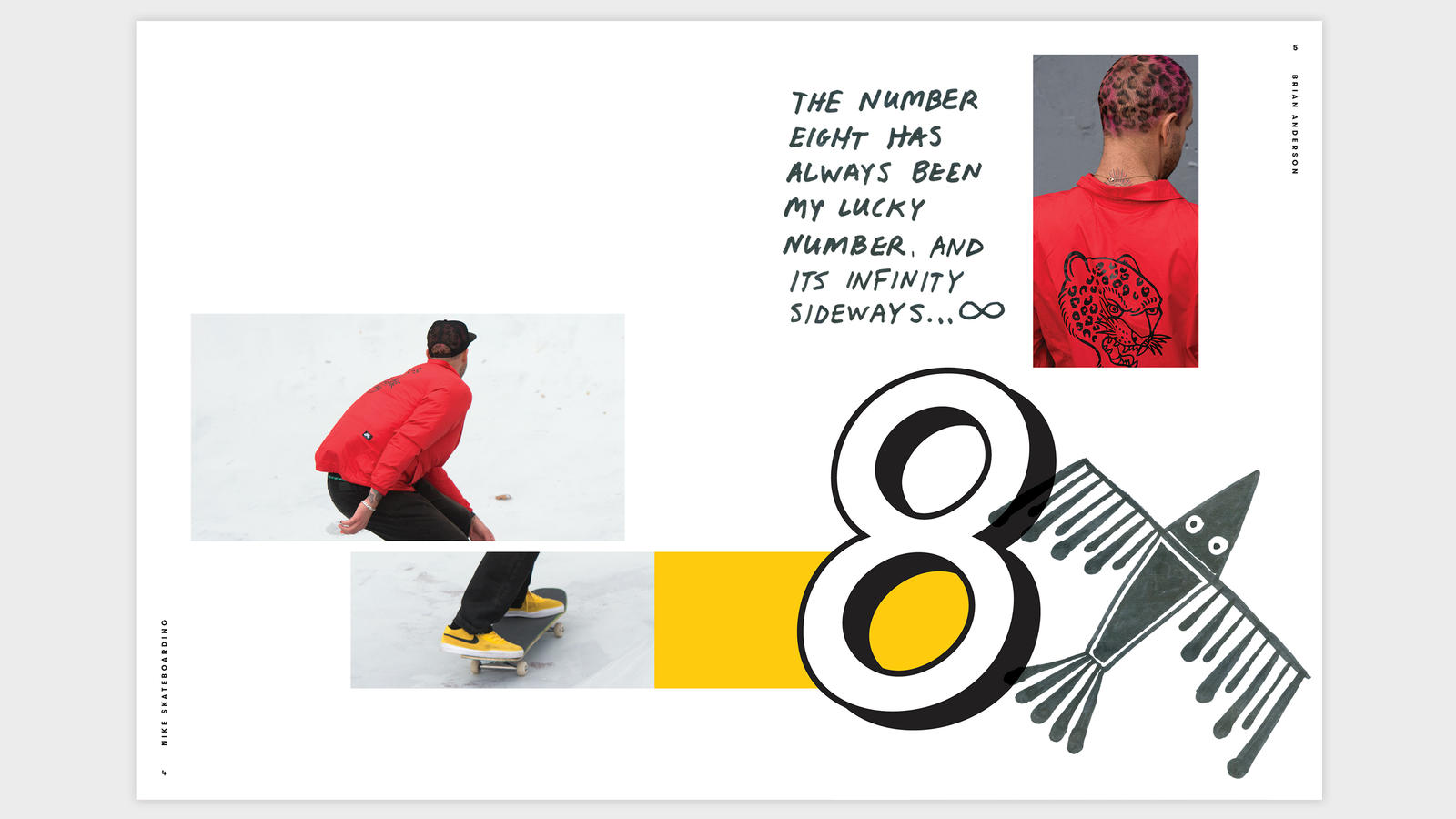 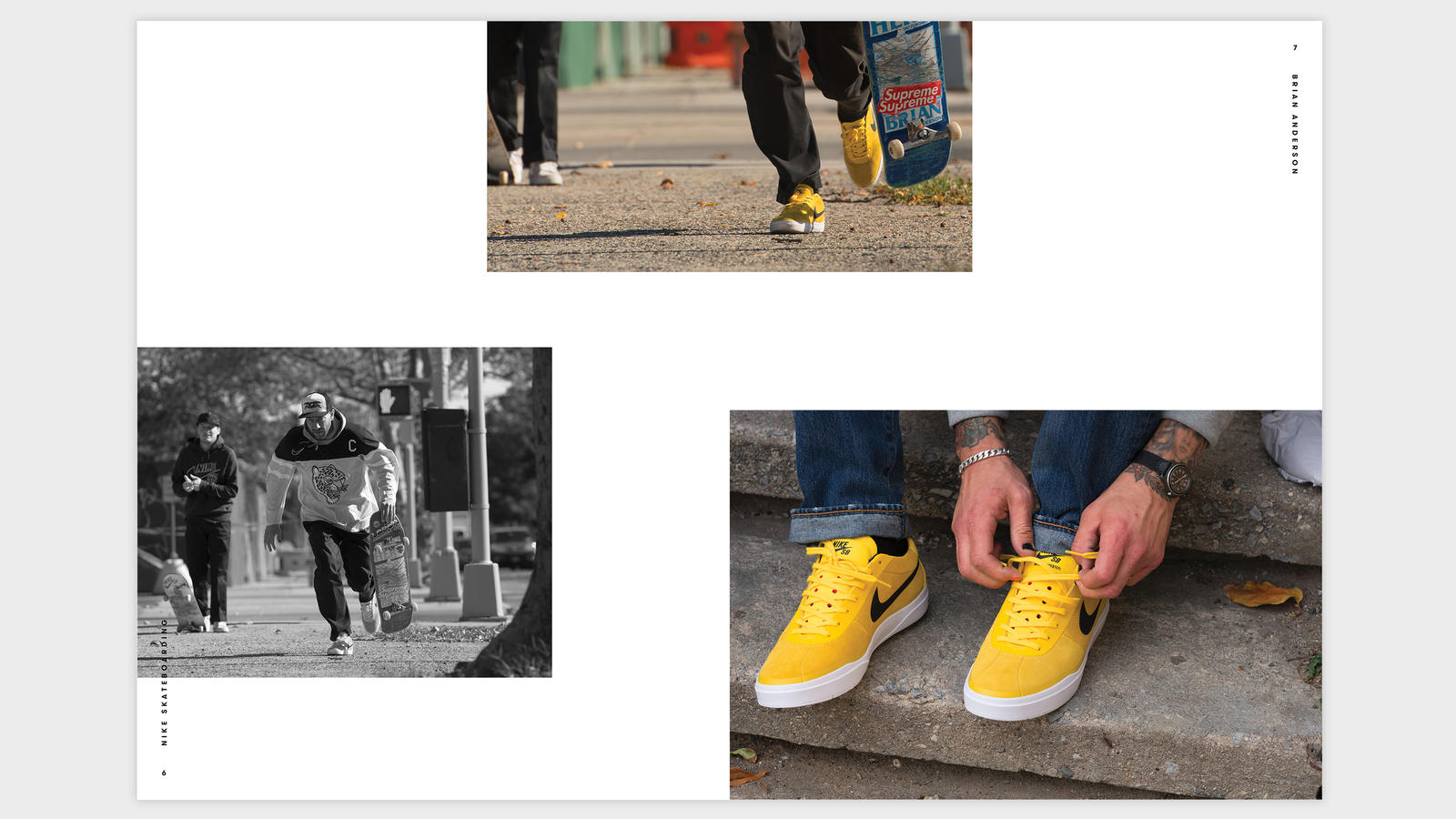 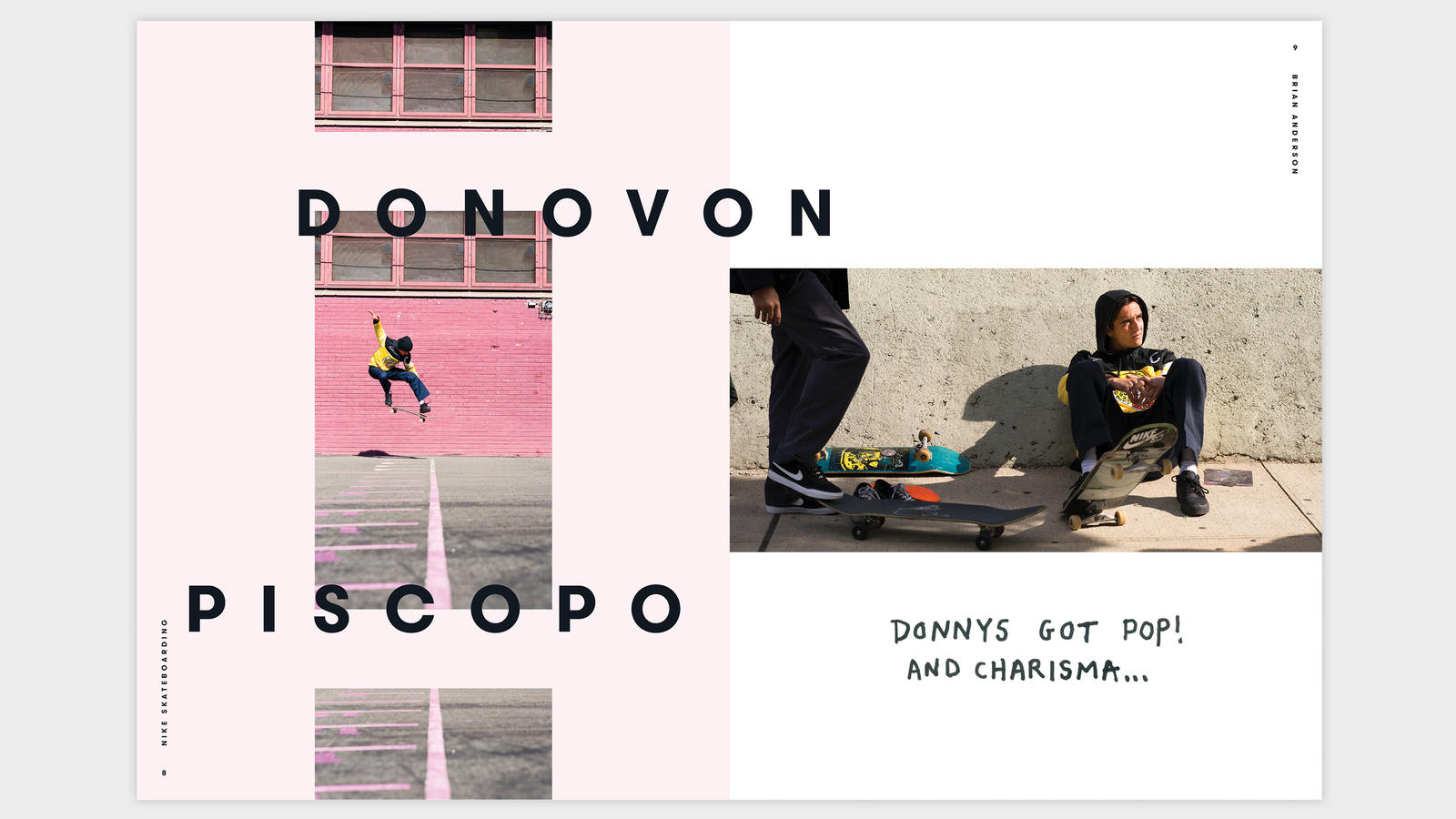 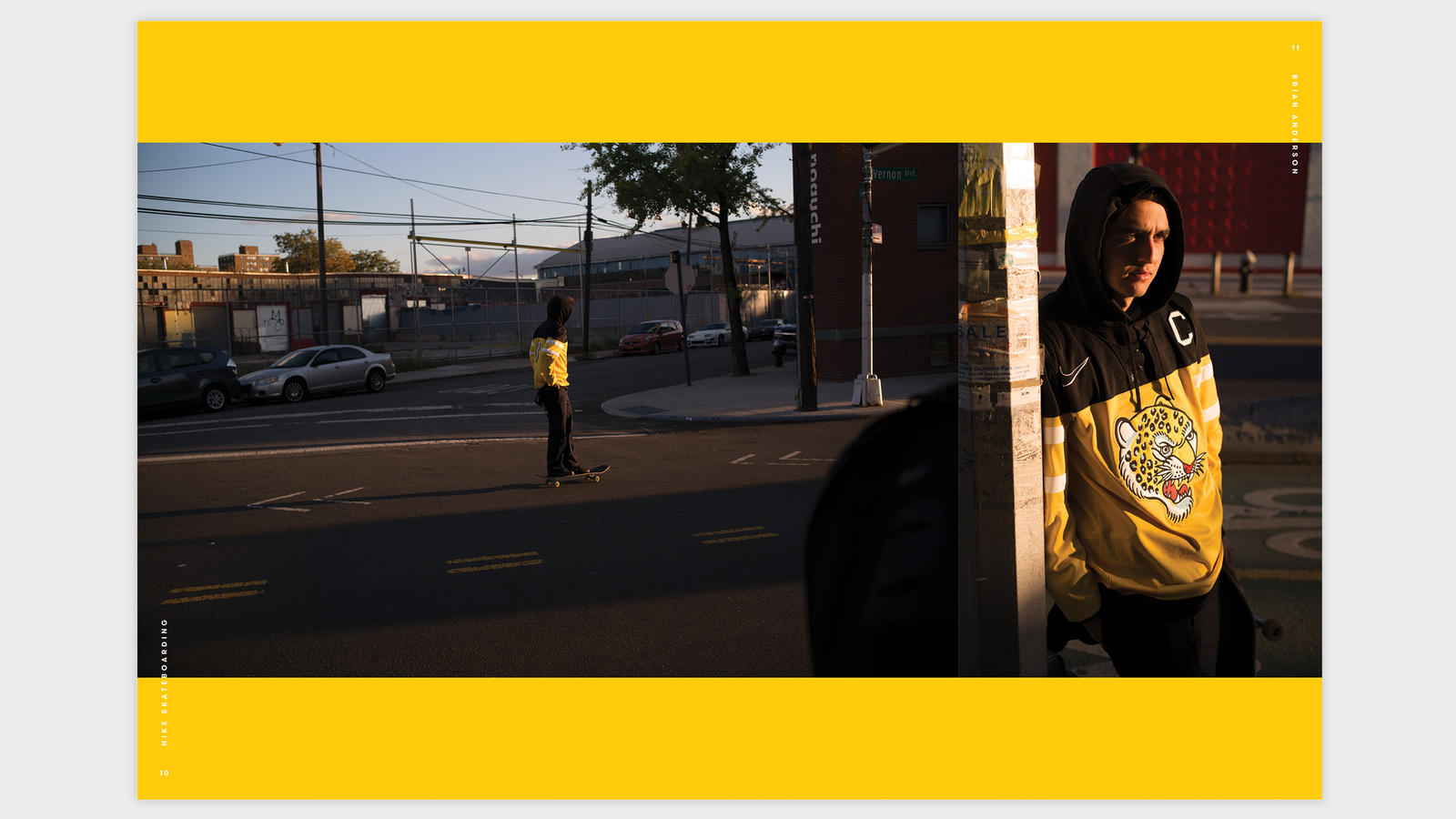 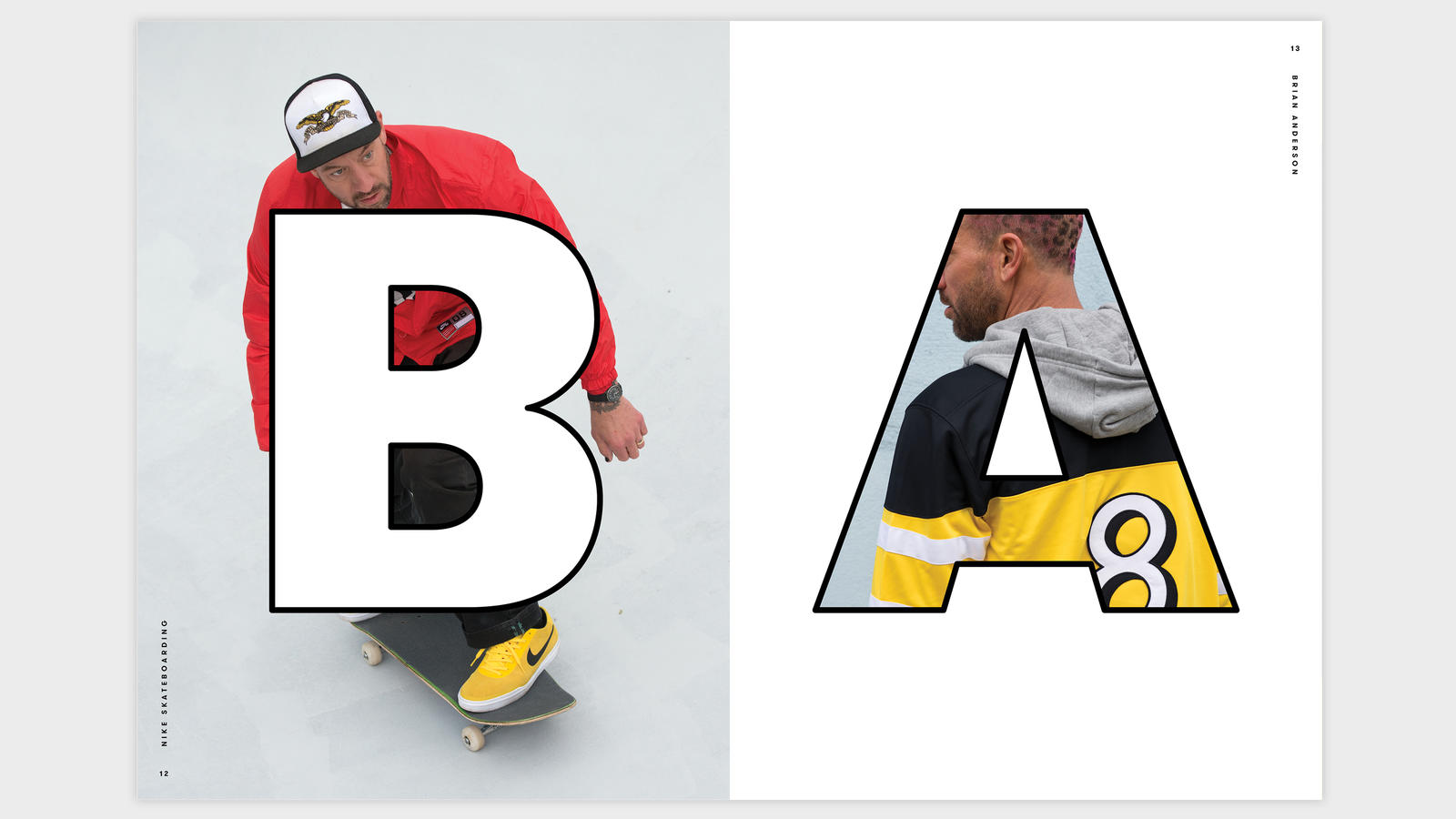 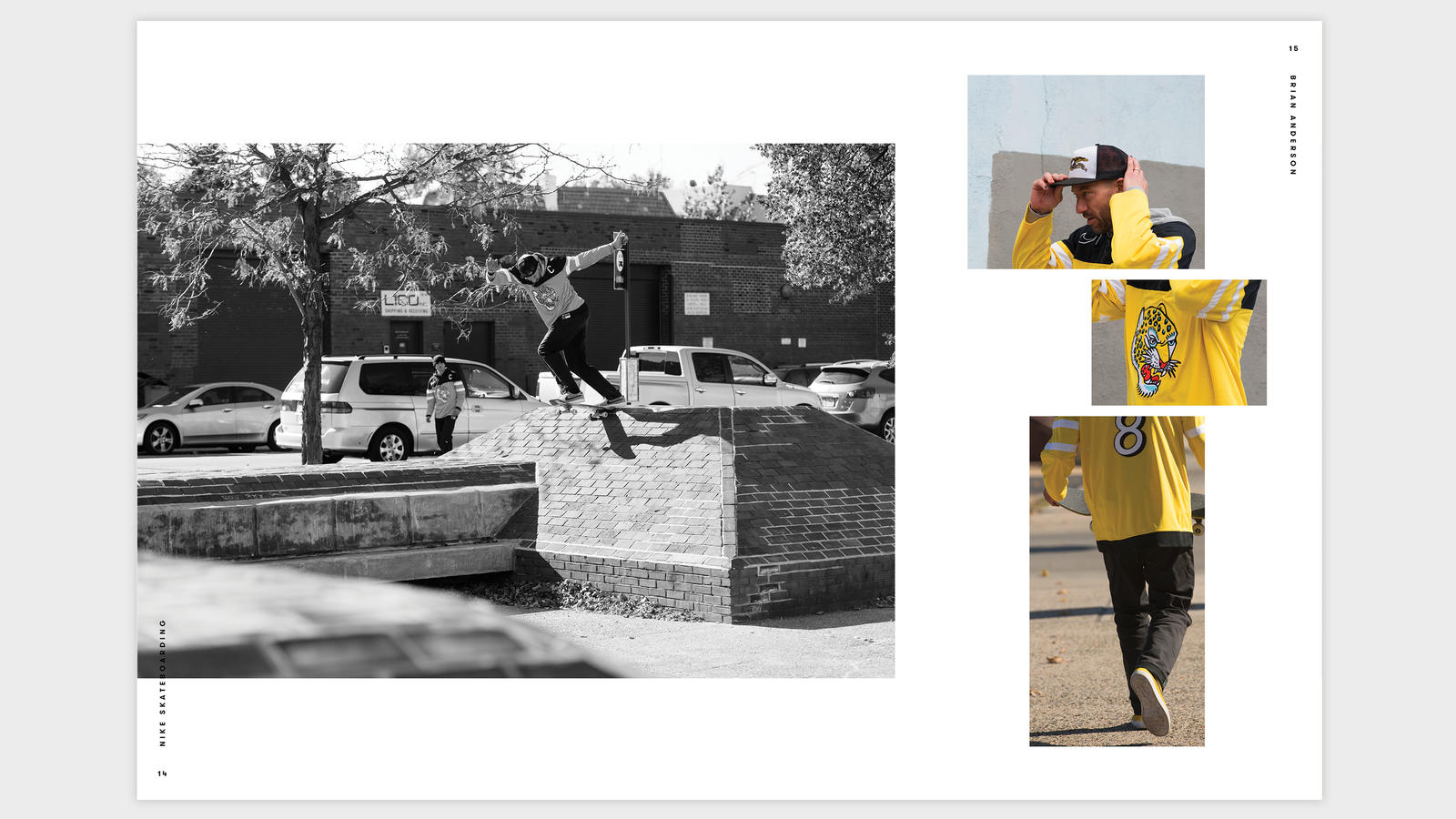 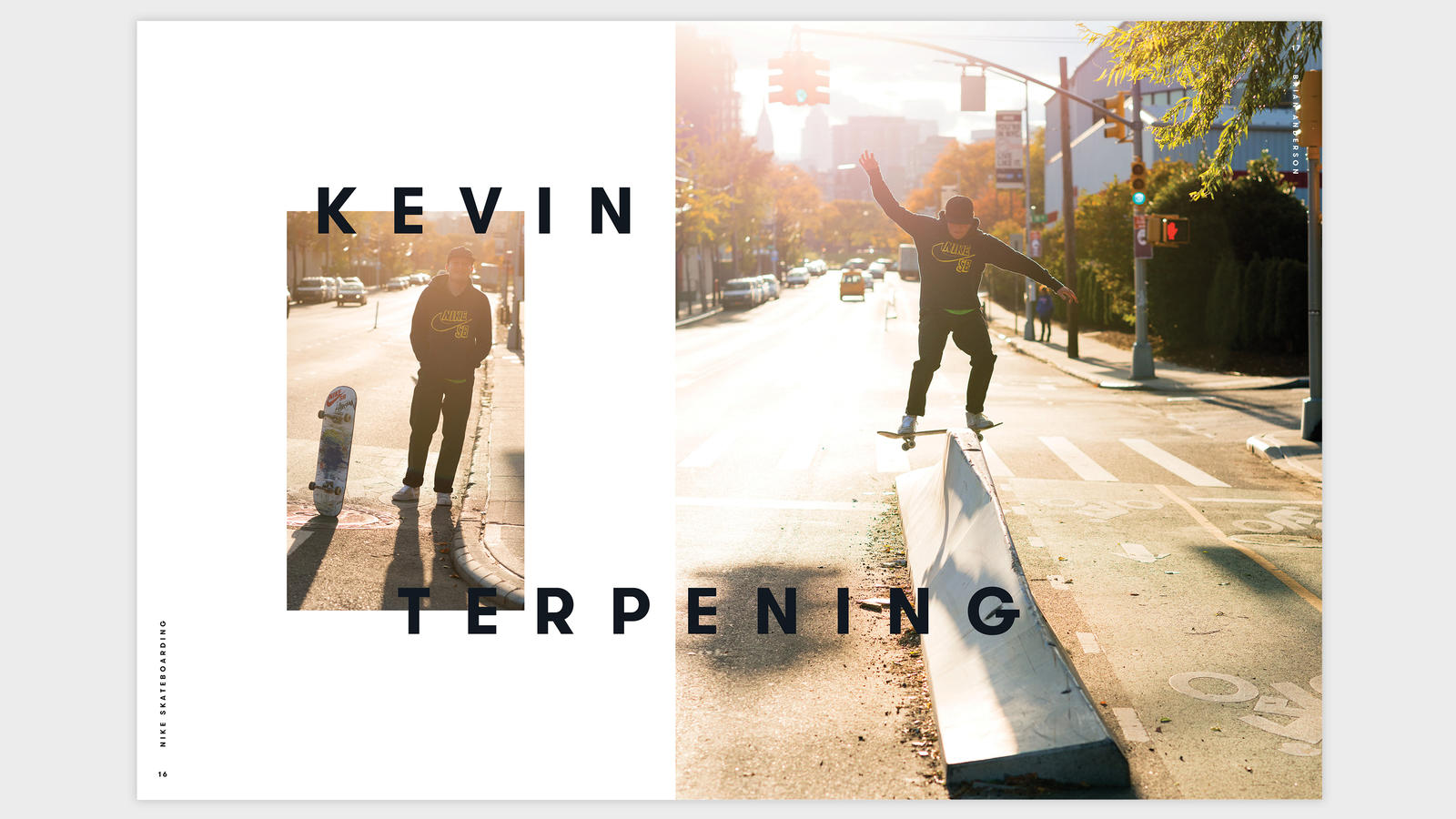 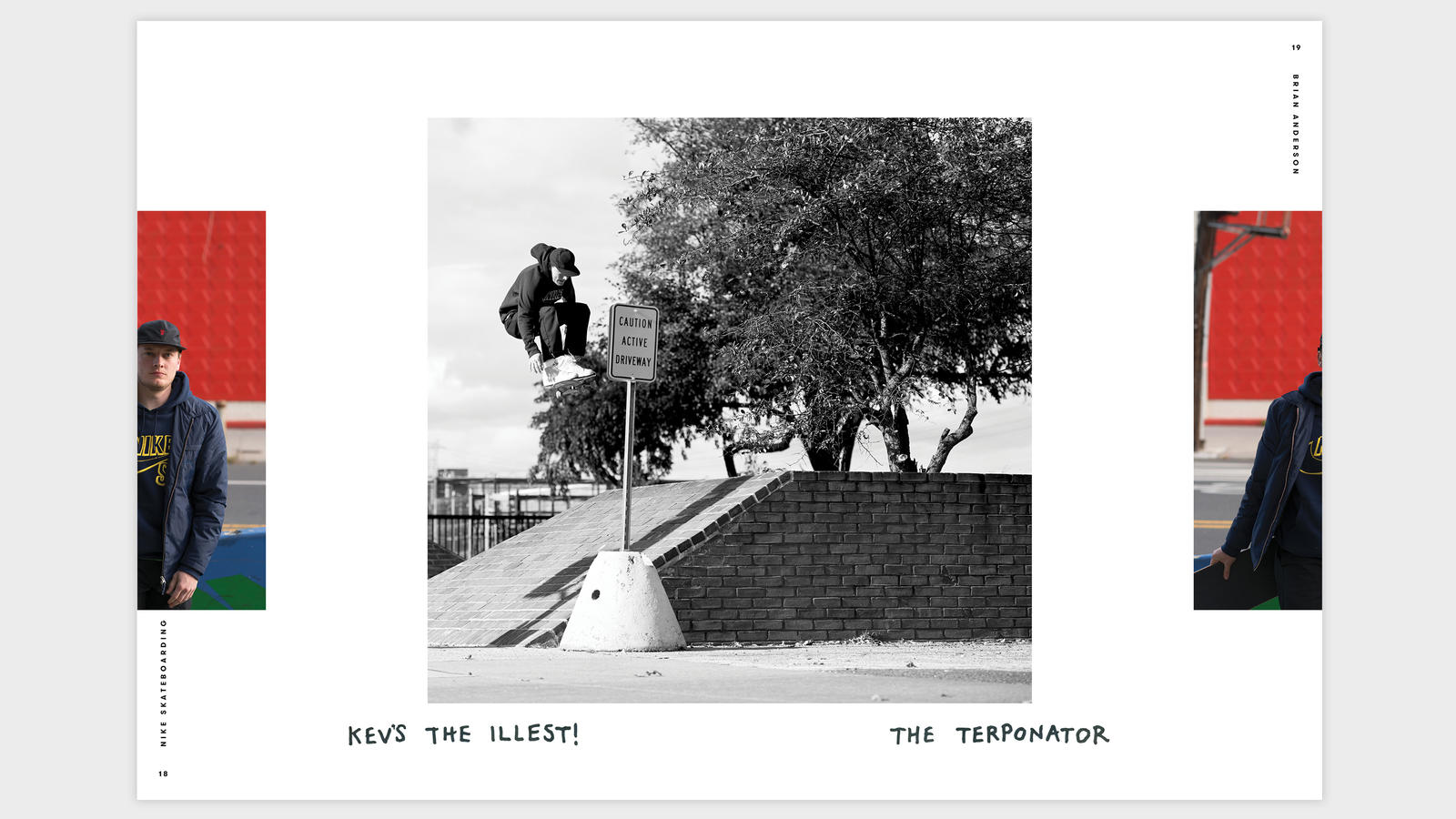 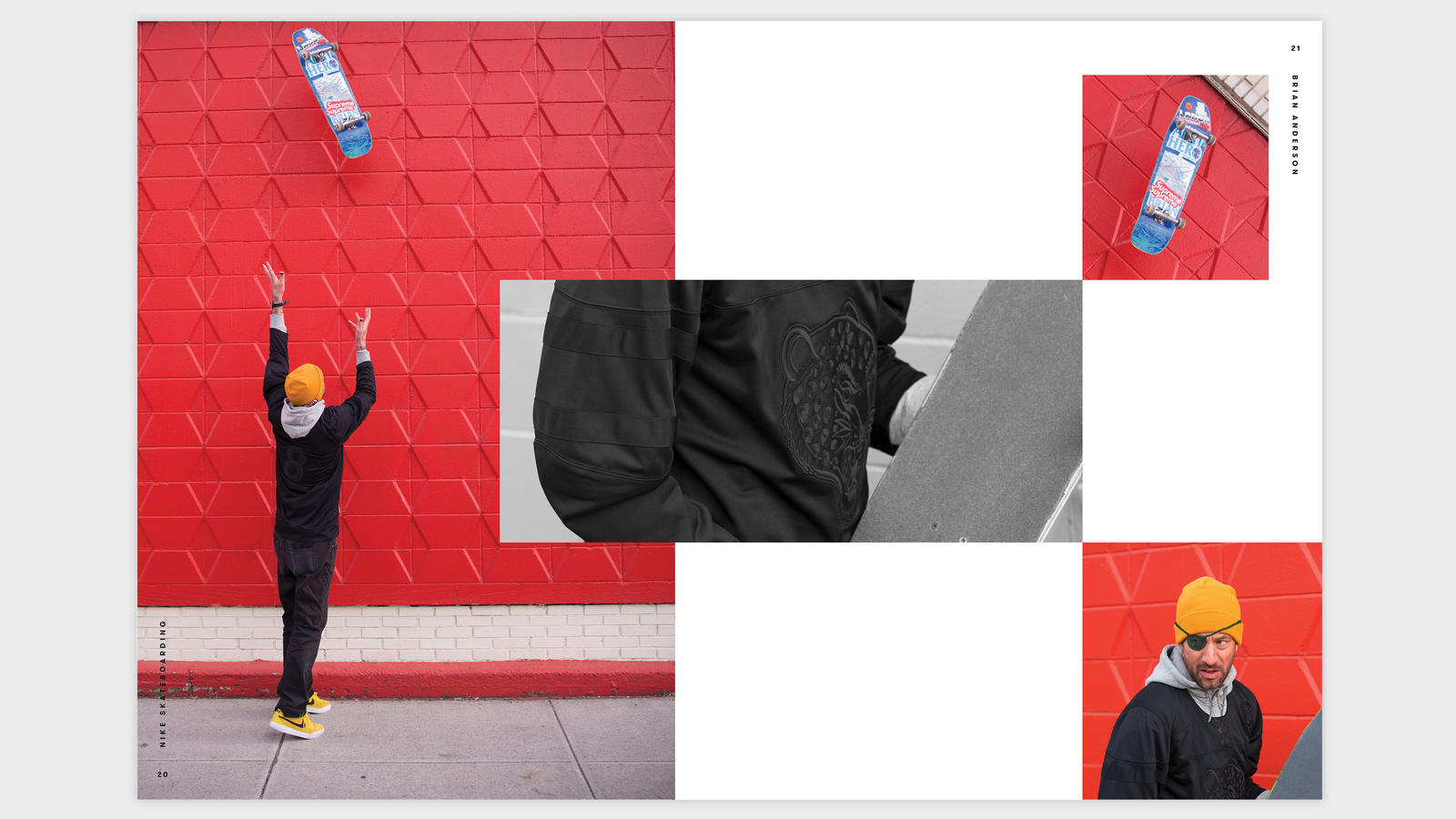 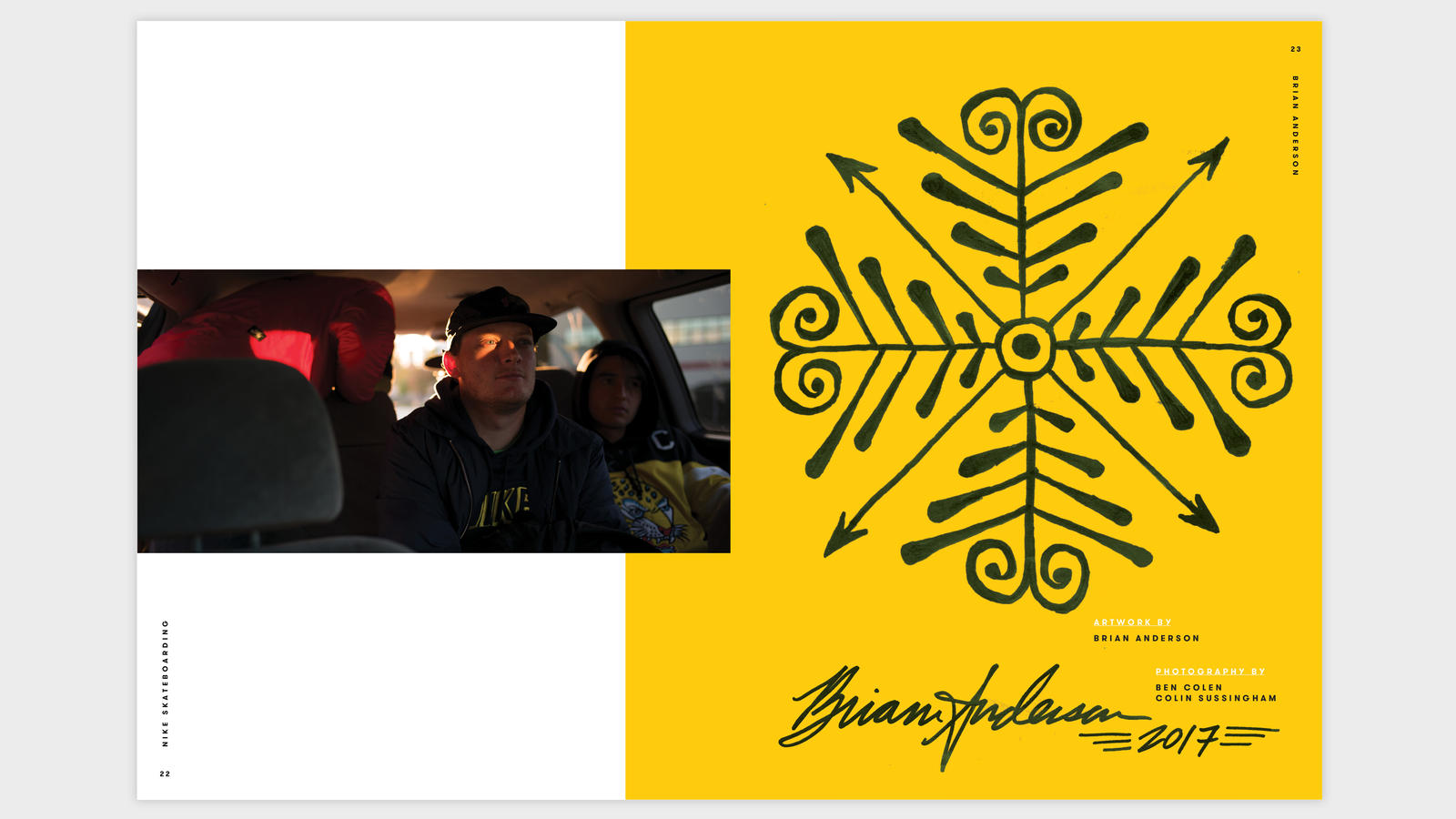 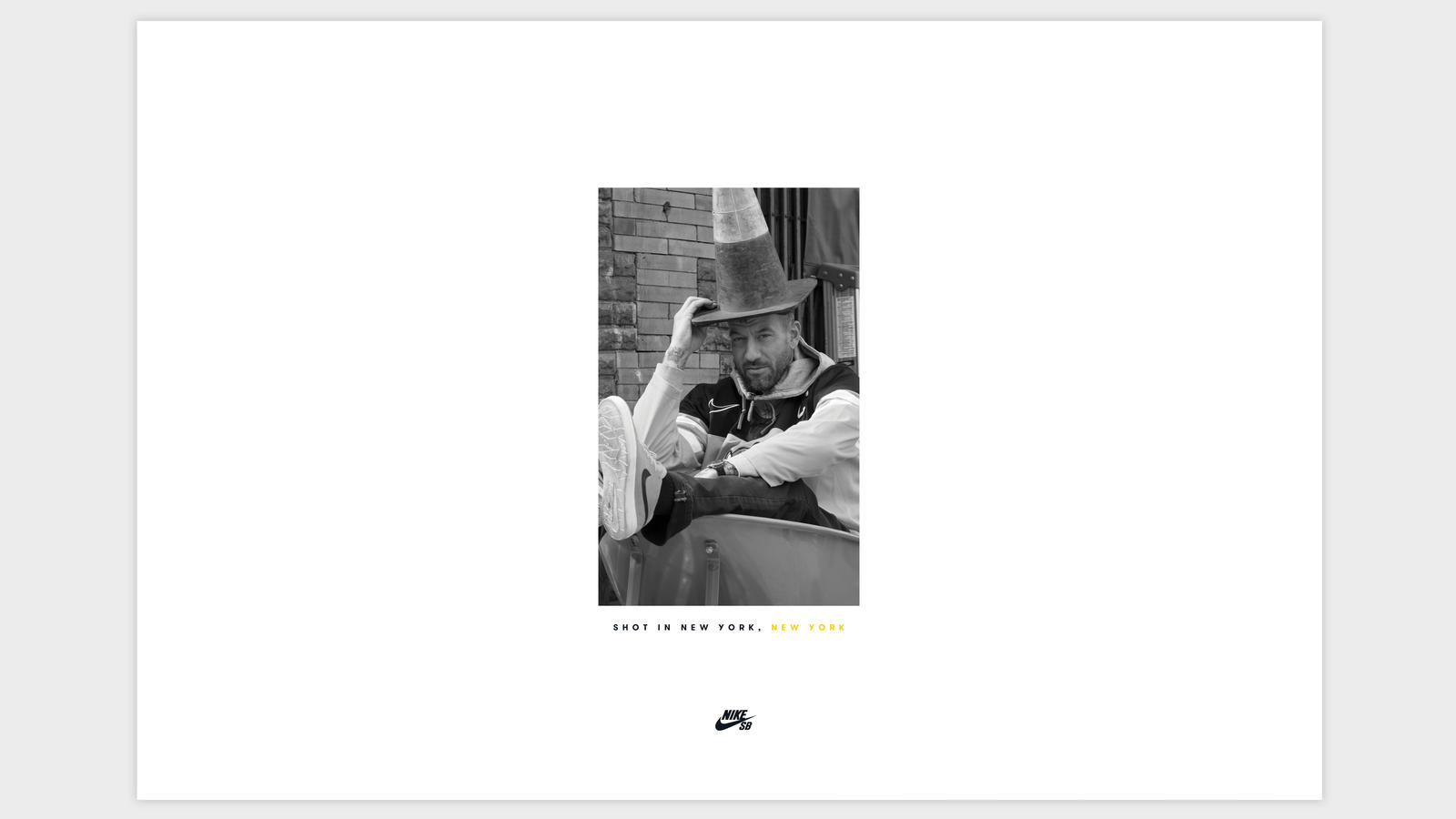 “I just was sitting at a café while we were filming for our last video in Seattle, and I just drew up a hockey jersey,” he remembers. Anderson sent the drawing to Beaverton, and in time the sketch became the basis for a capsule offering which pulls together the jersey, Nike Icon Hoodie, Nike Shield Coaches jacket and sunglasses. The collection is rounded out by a pair of bright yellow Nike SB Bruin Hyperfeel but does not include trousers. At 6’ 4”, it’s not easy for Anderson to find a perfect pant fit.

The 40-year-old cares deeply about the way clothes feel. He’s fluent in the nuances of the consummate white T-shirt and believes the world needs a new size, “Large Extra,” to fill a vast void for those who need a little space but don’t want to swim in a boxy cut.

For instance, the average hockey jersey is made to cover pads, requiring large armholes and over-broad shoulders. “Often hockey jerseys are built so huge. I could kind of get away with wearing them, because I'm a big guy, but I had one that was like a rock 'n' roll merch kind that I got from some website,” says Anderson.

“I sent it to campus to be like, ‘Hey guys, let's follow this pattern,’” he continues. “The wrists and the forearms are not super baggy and wavy. The fitting is great.”

The piece, which comes in yellow or black, is adorned with a brash jaguar head, captain’s “C” and a Swoosh, hand drawn by Anderson himself (“It is a little off kilter and imperfect, which I think is so rad,” he says.) His graphic sensibility also extends to the BA Icon Hoodie that Anderson describes as having “nice and chunky” embroidery.

“When I did that, I looked up old '80s Nike stuff. And some of the logos were so huge,” he explains. “So I thought, ‘Why not make it that way, instead of some subtle thing…just put the logo on blast.’”

As for the jacket, Anderson says, “It’s chill.” On the sunglasses, he’s extended the patterning of the jersey graphic onto the frames. And, those yellow Bruins have a “really good” upper.

The Brian Anderson collection releases January 19 on nike.com and at select retailers.