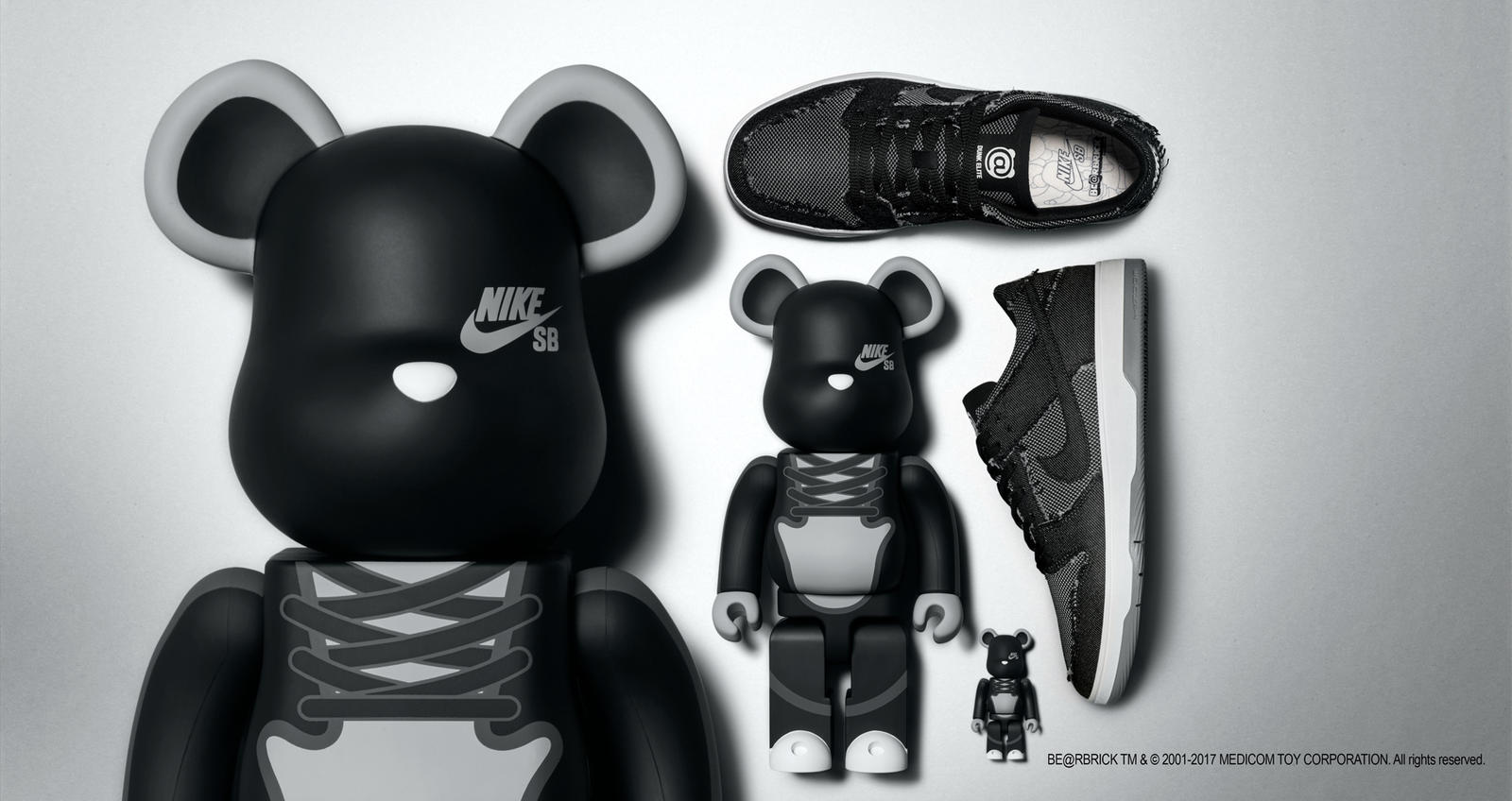 The history of the Nike SB Dunk reads something like a sneaker-world fairytale. What started with a risk — bringing an ’80s basketball shoe back in the 2000s — ended up igniting the world of skateboarding and changed sneaker culture forever. Since 2002, the shoe has resisted definition while attracting devotion around the world. Skateboarders still skate any Dunk to death. Loyal fans keep collecting the latest drops.

Without question, there’s a unique alchemy to the Nike SB Dunk legacy that’s connected to athletes, collectors and culture. Fittingly, over the past 15 years, collaborations and special partnerships have helped make that legacy extraordinary. The shoe has benefited from association with pioneering bands, graffiti writers, fashion-forward skateboarders and more. All this makes the Nike SB Dunk an icon not just in skateboarding, but also in streetwear.

Standing out among the various partners, MEDICOM TOY, the famed Japanese collectible maker, has been both a constant associate and progressive innovator.

Nike and MEDICOM TOY have worked together since 2002, first creating a limited-edition set of Nike-styled BE@RBRICKS. “Nike has collaborated with Medicom on a number of different sports, from global football to tennis,” reminds Sandy Bodecker, VP Special Projects, who spearheaded Nike SB. “One of my favorites was the 2006 World Cup BE@RBRICKS​ collection that represented all the Nike-partnered federations. It came in multiple sizes and the figures were used in retail executions around the world.”

Despite the breadth of engagement, skateboarding is where the connection is strongest. Characters were made with the first four pros — Gino Iannucci, Richard Mulder, Reese Forbes and Danny Supa — creating not only an arresting series of toys (the Reese version was even made lifesize) but created an unstoppable bond between the Nike SB Dunk and MEDICOM TOY. 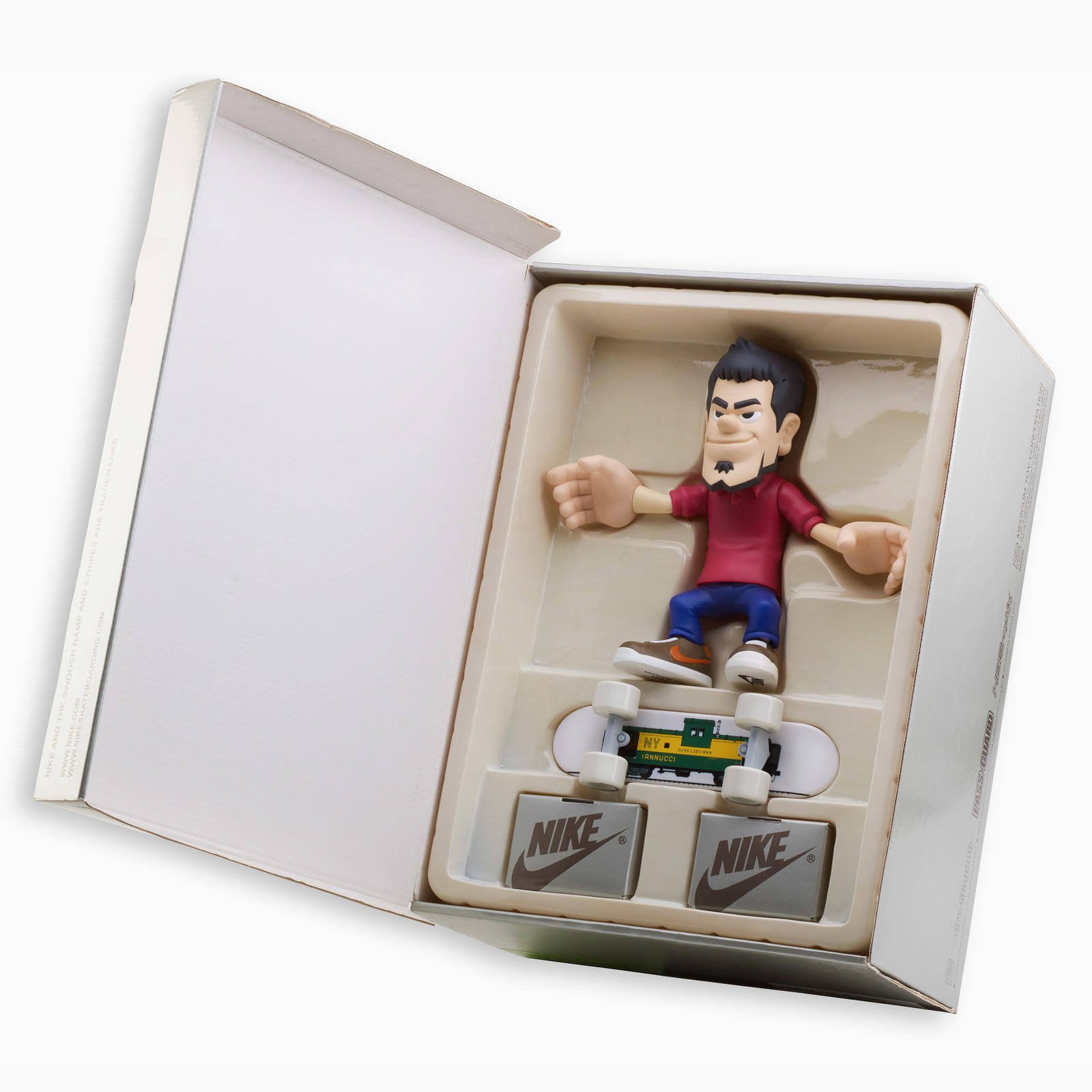 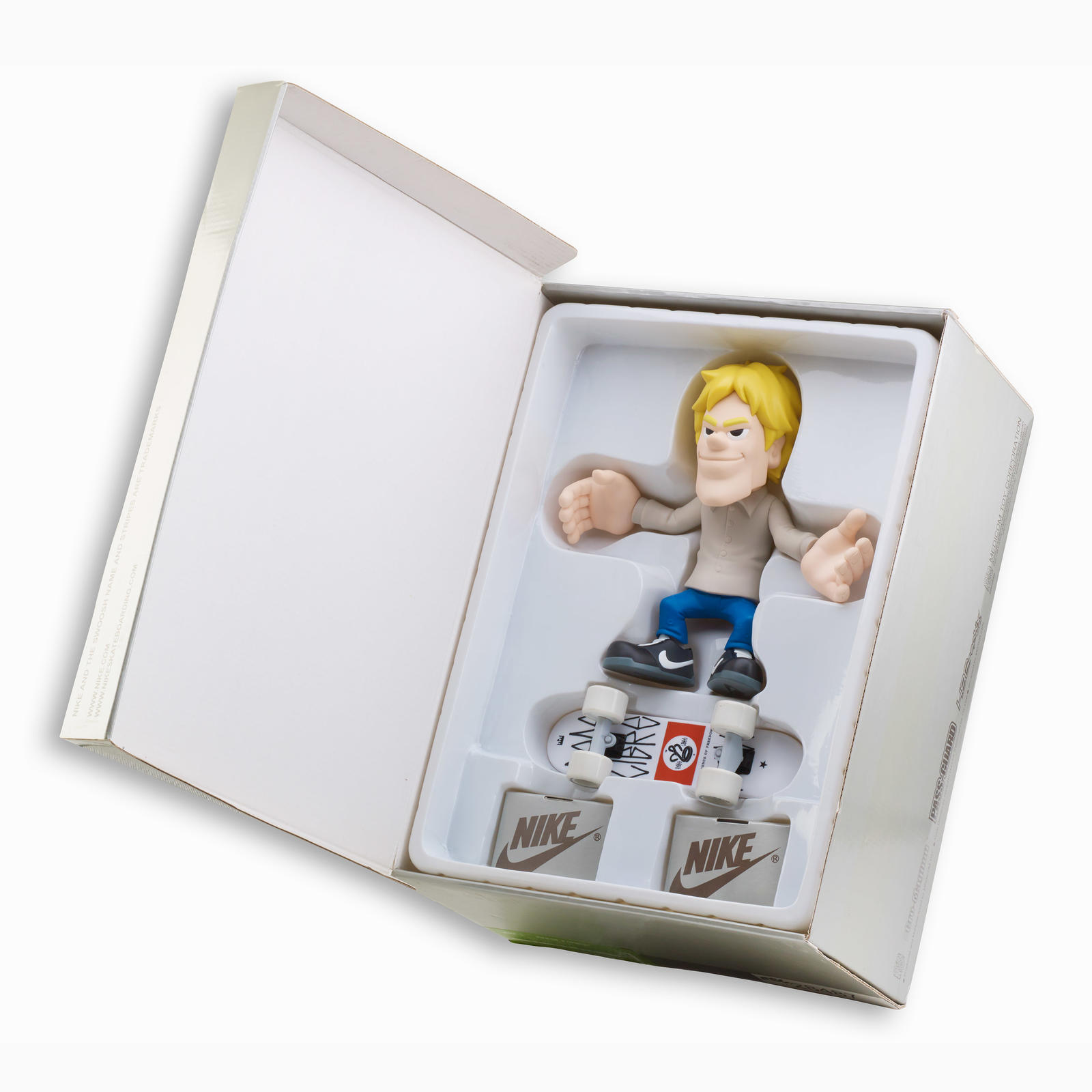 “Whenever we approached somebody to collaborate, we considered if it was going to stand the test of time. We asked ourselves, ‘Does the prospective partner have something that really speaks to a certain generation or a certain subculture that we can go back to?’” says Jesse Leyva, Senior Creative Director for Nike SB. “Medicom is just part of the fabric of Harajuku. When you look at Harajuku culture, there's streetwear. Then within streetwear, there's art, music, sneakers and toys. It all goes hand-in-hand.”

The initial Nike x MEDICOM TOY shoe, a white Nike SB Dunk with college blue and orange accents, released in 2004, and the Nike SB Dunk MEDICOM TOY Black Denim followed in January of 2005. With its medium grey/black denim upper, the shoe played perfectly for skate and street, and was immediately recognized as a certified grail. Other shoes that followed toyed with an ever-inventive palate of materials — including reflective 3M, Gore-Tex and even faux fur — the MEDICOM TOY Black Denim remained the benchmark. 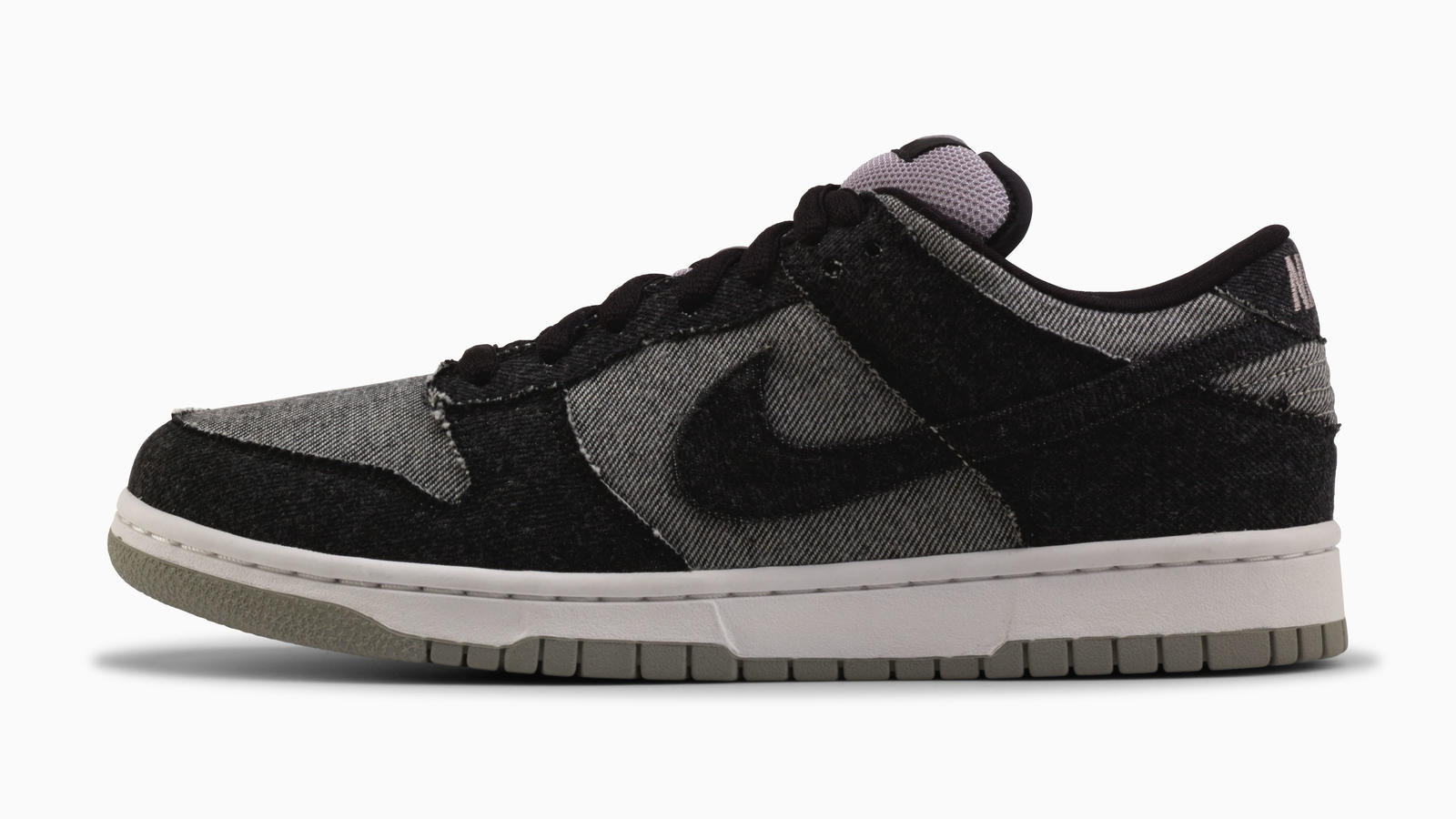 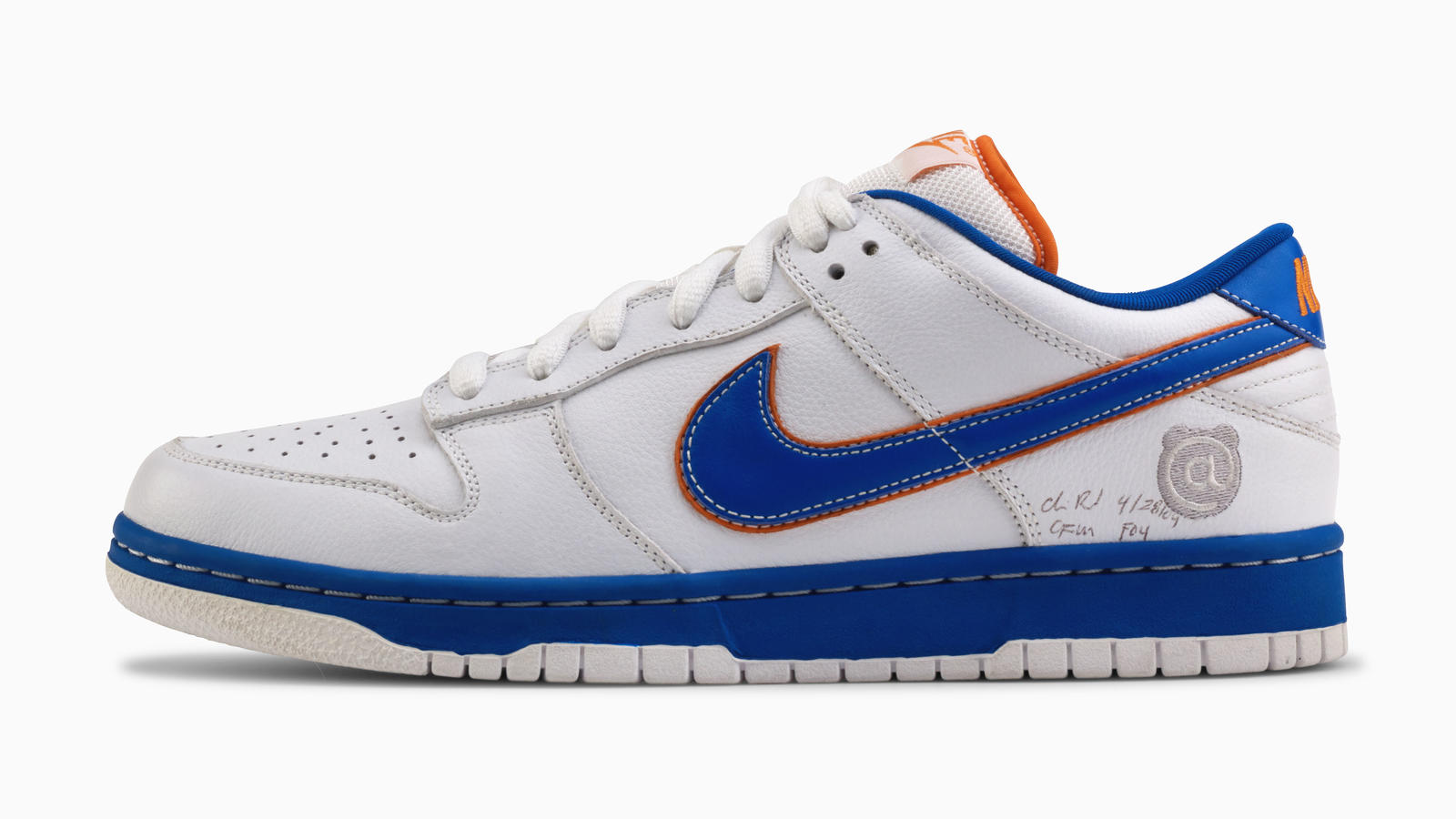 Now, Nike SB and MEDICOM TOY bring a historic twist to the all-new, innovative Nike SB Zoom Dunk Low Elite, which will be available November 24 on SNKRS, nike.com and at select retailers.