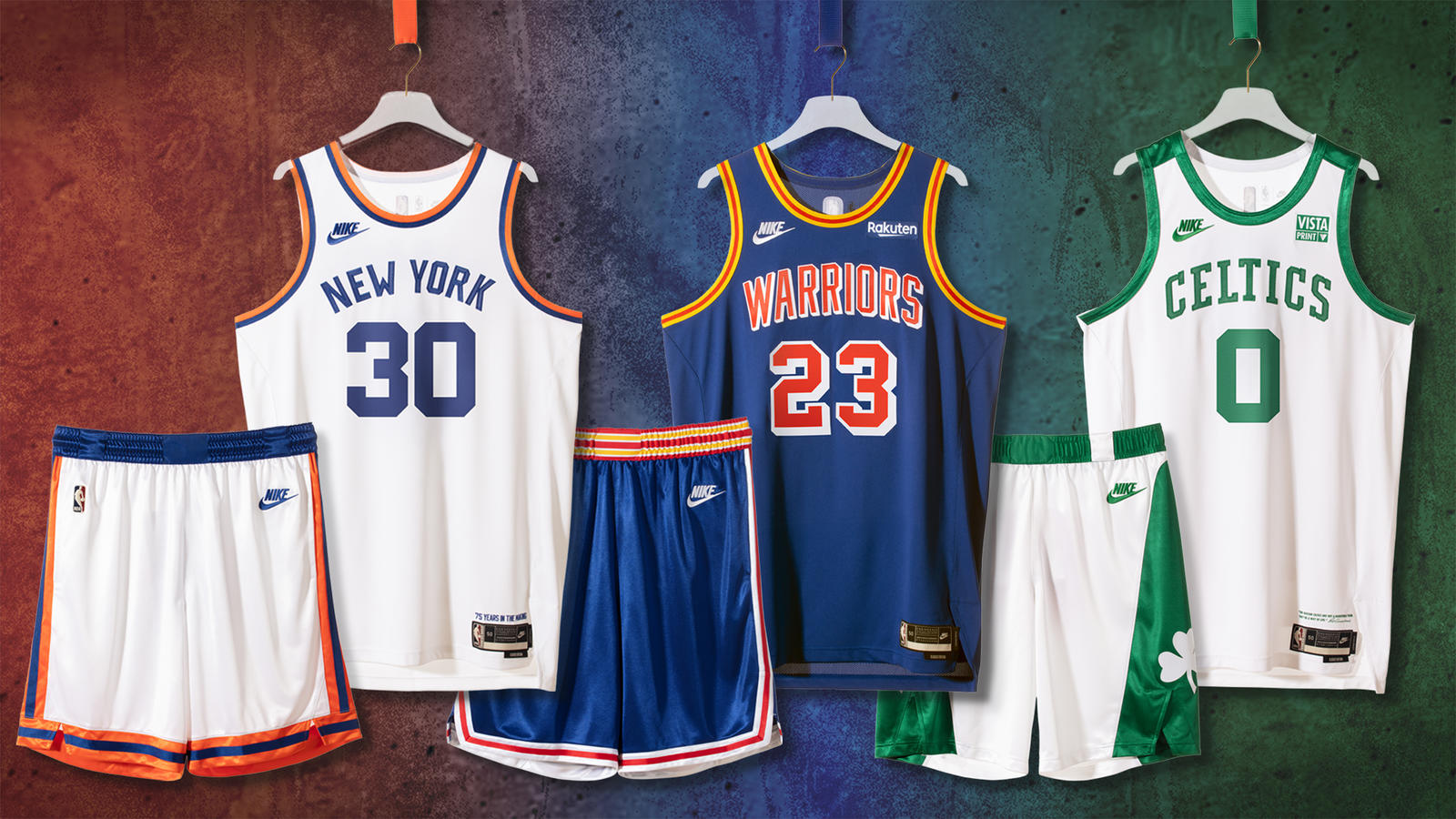 The Nike NBA Classic Edition uniforms for the 2021-22 season debut with three franchises, each taking a storied place in the evolution of the modern NBA.

Nike’s uniform design for basketball is unmatched in terms of variety and depth of detail. In celebration of the NBA’s 75th anniversary season, Nike unveiled new Nike NBA Classic Edition uniforms recognizing the three franchises that have been a part of the league since the beginning: the Boston Celtics, the New York Knicks and the Golden State Warriors (who were first known as the Philadelphia Warriors).

Those three teams helped lead the way on August 3, 1949, when the Basketball Association of America and the National Basketball League merged to become the NBA. At the time, the business of basketball was nascent and promising. League leaders knew fans would show up — but they couldn’t have predicted the ardent support that would help the league grow from an American experiment to the inclusive, global marvel it is today. The Nike NBA Classic Edition celebrates that fandom.

“Retro uniforms are nothing new in basketball. What is new is how the Nike NBA Classic Edition uniforms intersect with such a pivotal moment in the league’s history,” says Elesban Montoya, Design Director for Nike Basketball uniforms. “A big reason for the merger’s success was the fan support. So this is our spin on historic uniforms, but it’s also an emblem of respect for the fans who rallied for their teams and showed up for the league over the years.”

All three uniforms are badged in the classic Nike Sportwear logo, the first time the mark prominently appears on an NBA jersey. 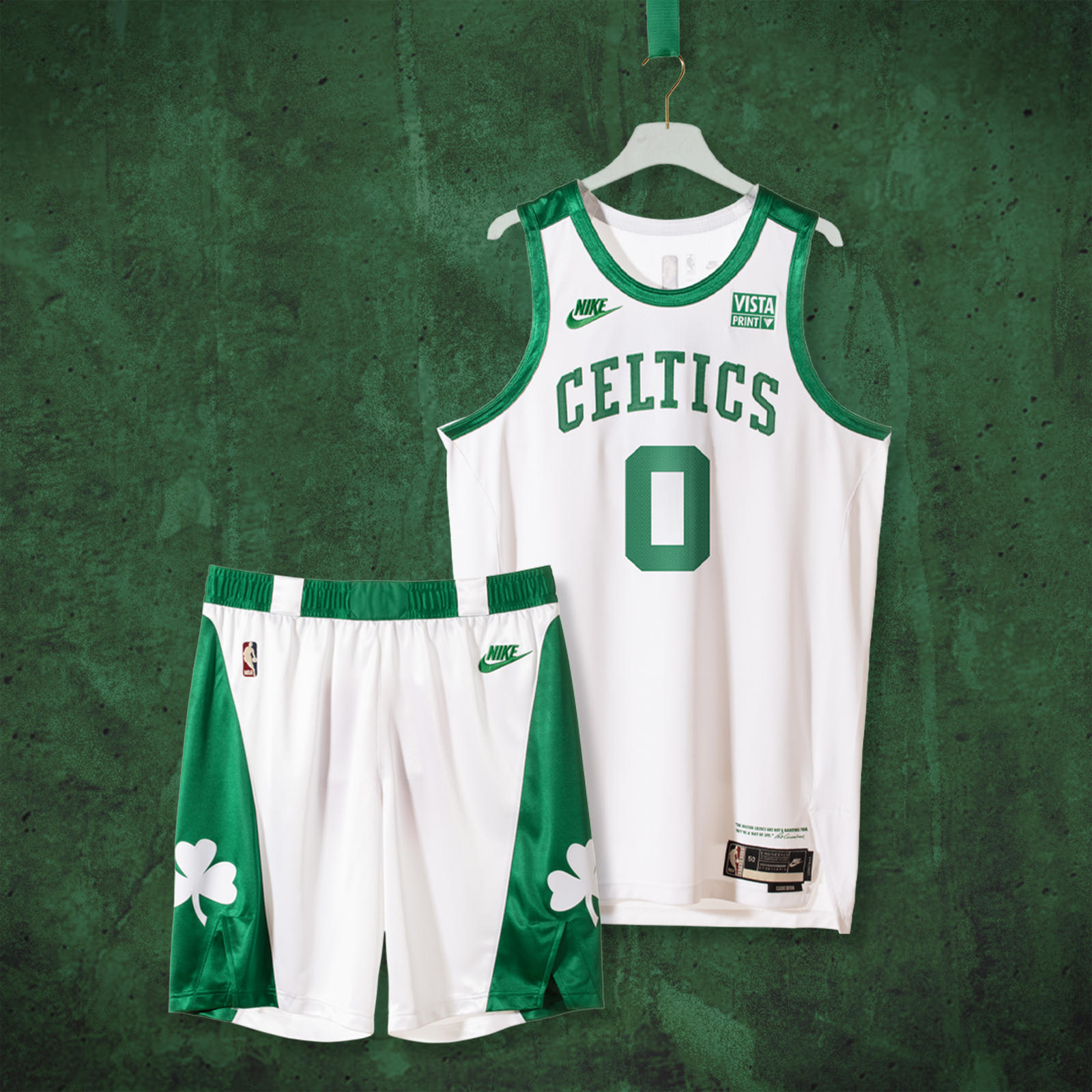 “The graphic work here is verbatim to the 1946 uniform, as is the set and shimmer-finish on the graphics,” says Elesban Montoya, Design Director for Nike basketball uniforms. “Back then, players wore tight-fitting, short-sleeved shirts, and the Celtics’ jersey had green shoulder-blocking — we nodded to that in this Nike NBA Classic Edition, and within the modern tank.” 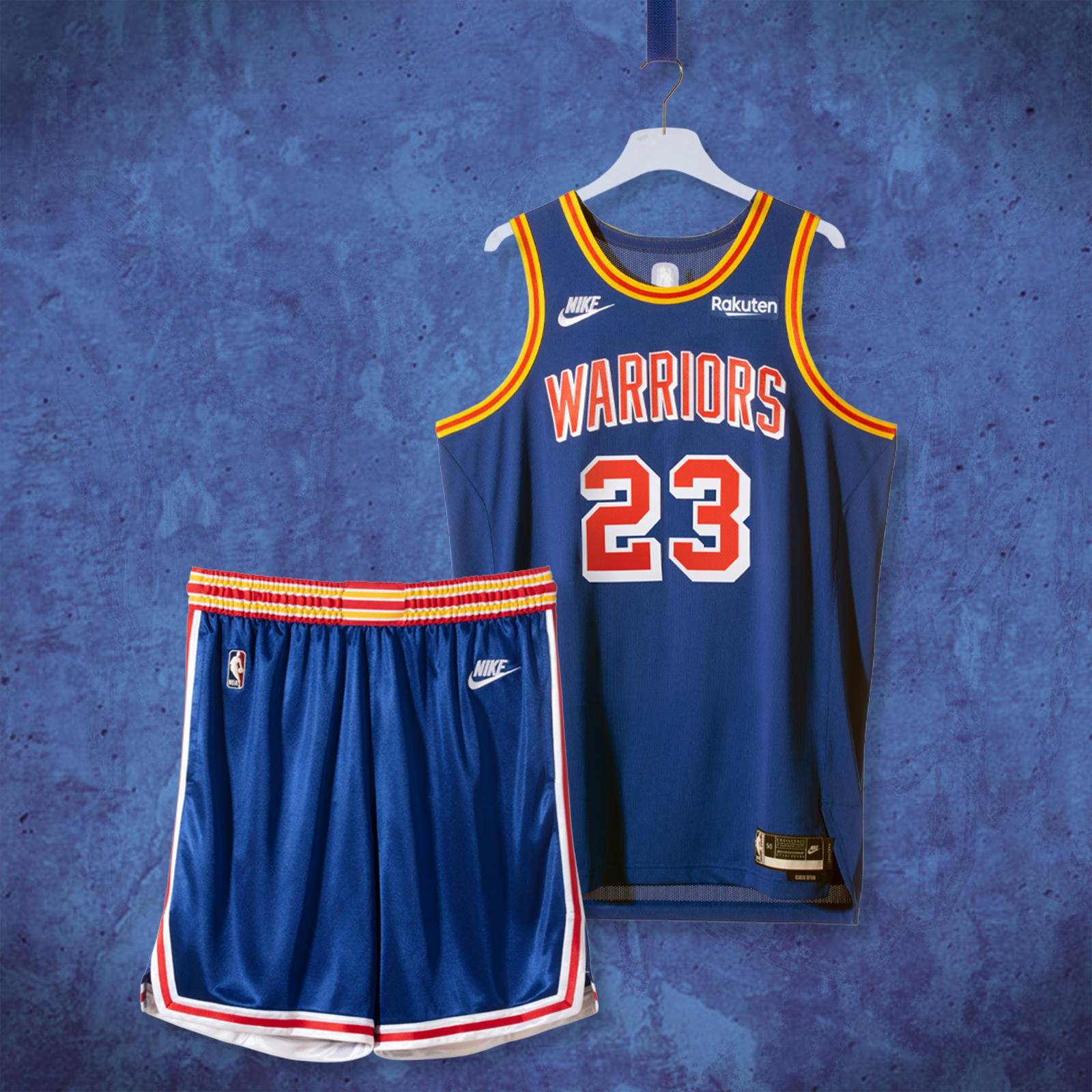 “We wanted to honor the transition from one city to another and design a jersey with authentic detailing that would pay homage to both teams,” Montoya says. “The original Philly jerseys were blue, yellow and white with striping on the waist and a drop shadow on the numbers — all reflected here — and we brought in the scarlet red, which is synonymous with San Francisco.” 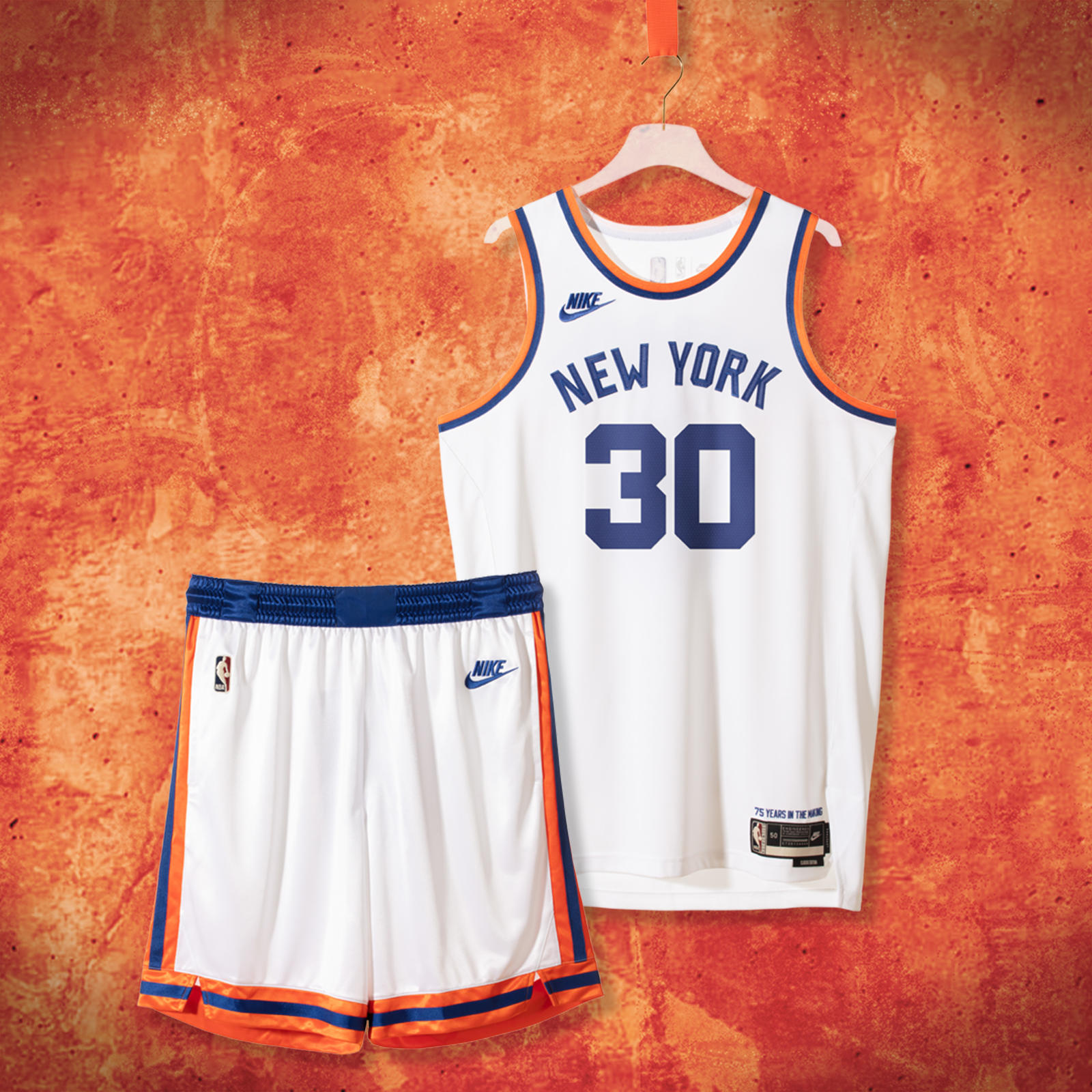 “We used the authentic New York typeface that the team had in 1946 and the same larger-scale numbers as the original jersey,” Montoya says. “At that time, the Knicks’ jersey had belt buckles around the waist, and to pay true homage, we designed loops into the waistband to give that similar aesthetic." 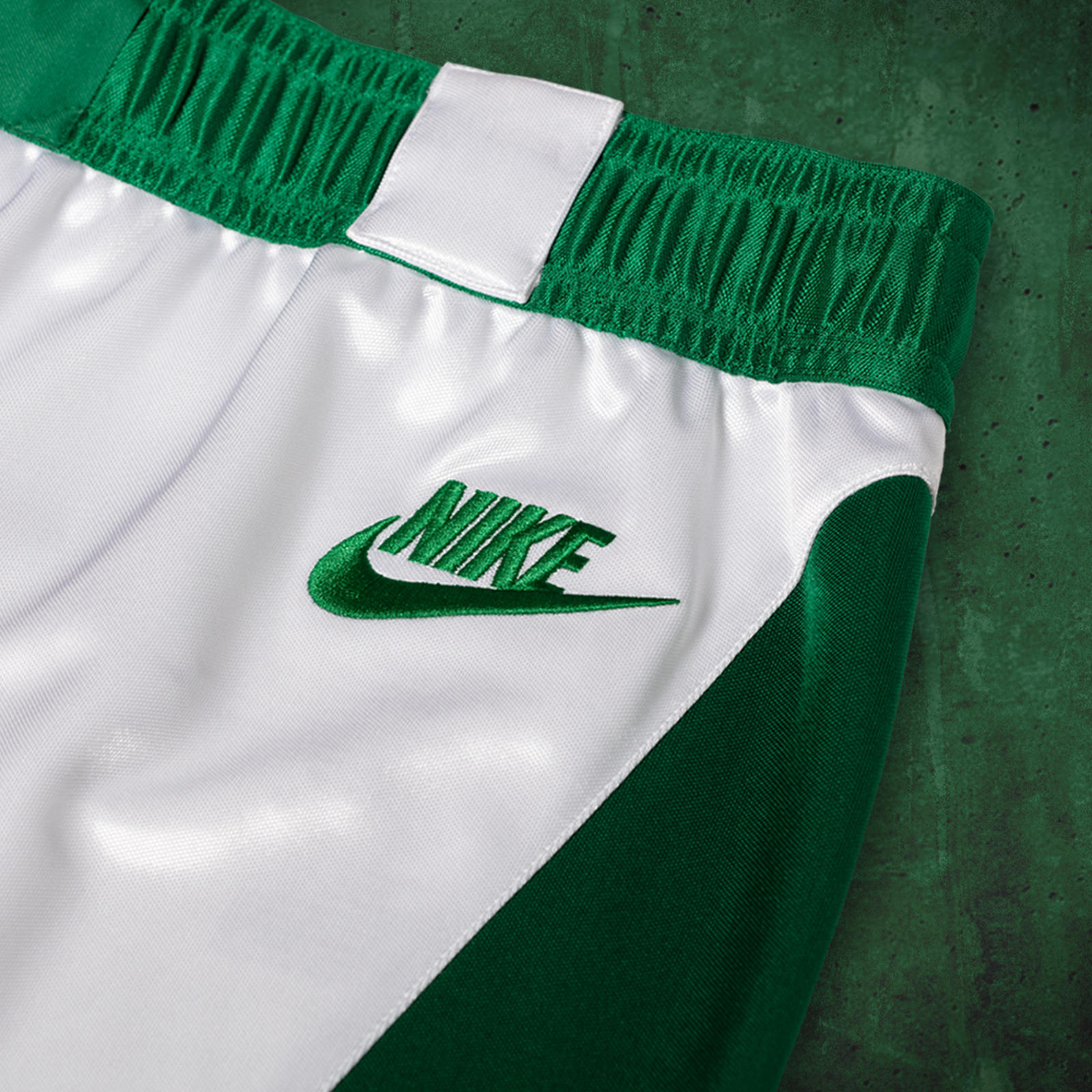 All three uniforms are badged in the Nike Futura logo, the first time the mark appears on an NBA jersey. 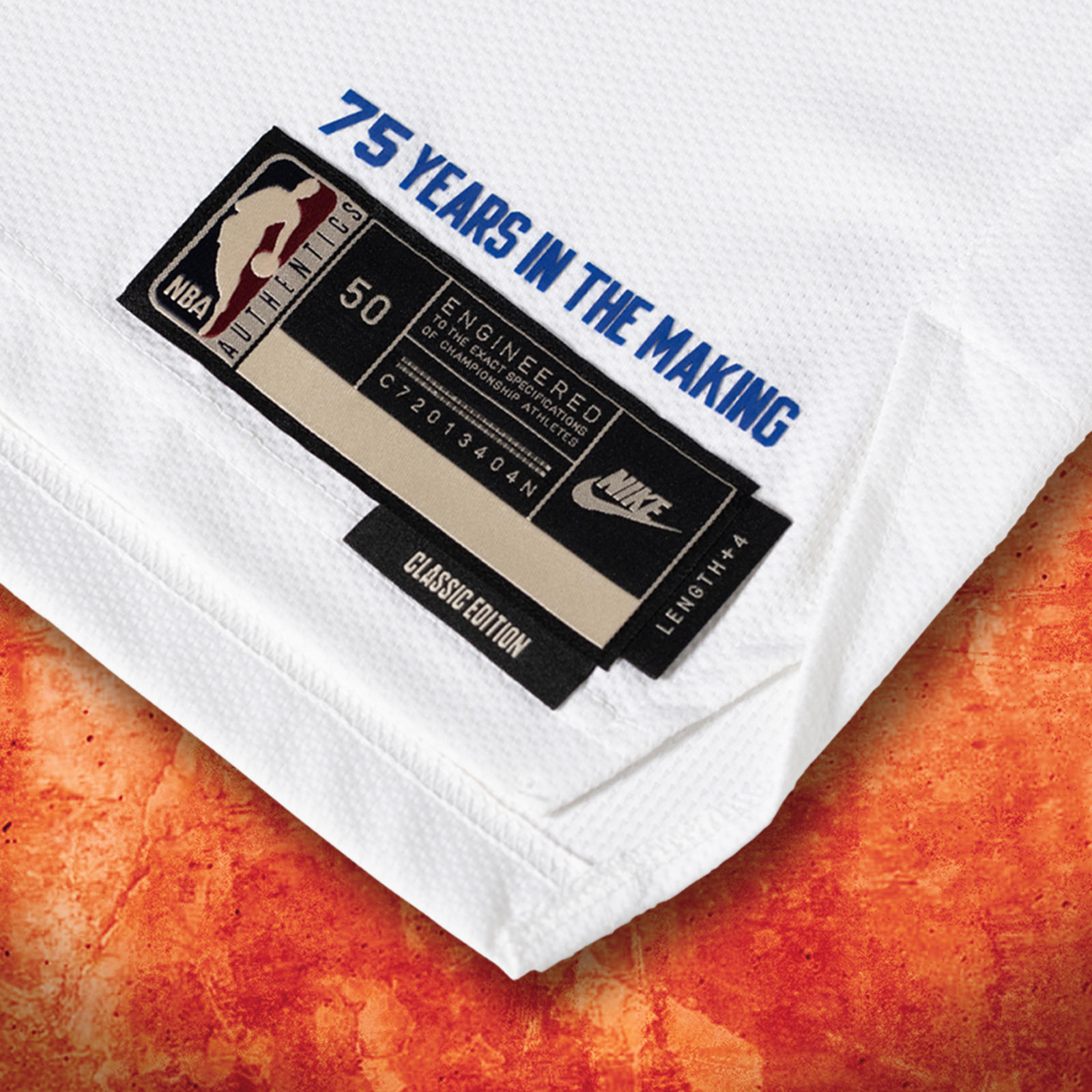 A bone-white background filters the “Classic Edition” jock tag and the NBA logo on the back neck.