Representation Is at the Heart of the Summer Nike N7 Collection 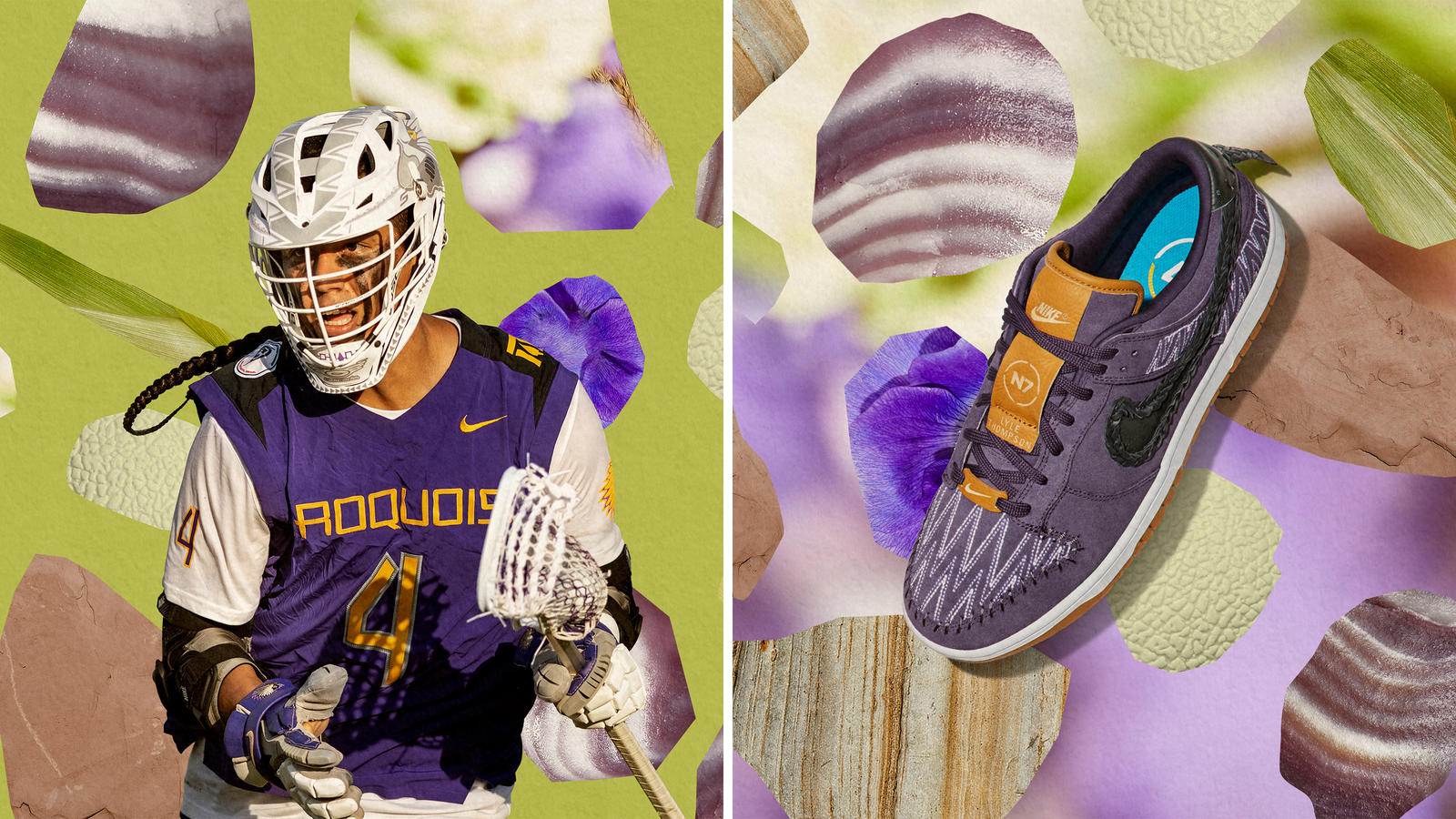 In the tradition of his Haudenosaunee ancestors who invented the game, Lyle Thompson, proudly from the Onondaga Nation, plays lacrosse not just for his own success, but so that he can represent his people. The braided details on the N7 Dunk by Lyle pay homage to the iconic traditional hairstyle worn by Lyle and his brothers — also legendary lacrosse players — which make them instantly recognizable as proudly Indigenous athletes on the field; the purple color represents the Iroquois Confederacy flag and wampum art of their home.

Lyle Thompson is less than 60 seconds into the first possession of the game, playing on his new team in Boston. On his first touch, the lacrosse forward kicks off a sequence that backs his reputation as one of the most talented lacrosse players in the world.

Cradling the ball, he sprints toward his defender behind the opposing net. Thompson spins, accepting the contact while using the defender’s momentum to pirouette toward the net, then launches a shovel shot over his right shoulder, diving to the ground. Thompson registers his first goal on his new squad so quickly that the moment could’ve been written into the game program.

Showing up right from the start — and consistently presenting the best version of himself to honor his team — is a principle Thompson stands by. That concept of representation also has layers of historical meaning for Indigenous communities across North America.

“In representation, it’s huge to continue to show up over time, otherwise you can’t expect to make significant change,” says Thompson. “This is especially true within Indigenous communities. If you show up once or only do something in the short term, you can actually hurt communities rather than help them.”

This year’s N7 collection focuses on lasting representation as a core theme. In the footwear, three silhouettes channel the backgrounds of three different athletes — Thompson, volleyball player Lauren Schad, and basketball guard Kyrie Irving — through personal design touches that are important symbols to their identities. The shoes, which include the Dunk Low, the Air Zoom Type and the Kyrie Low 4, will be available through the Nike By You builder, giving others a canvas to represent their own values. 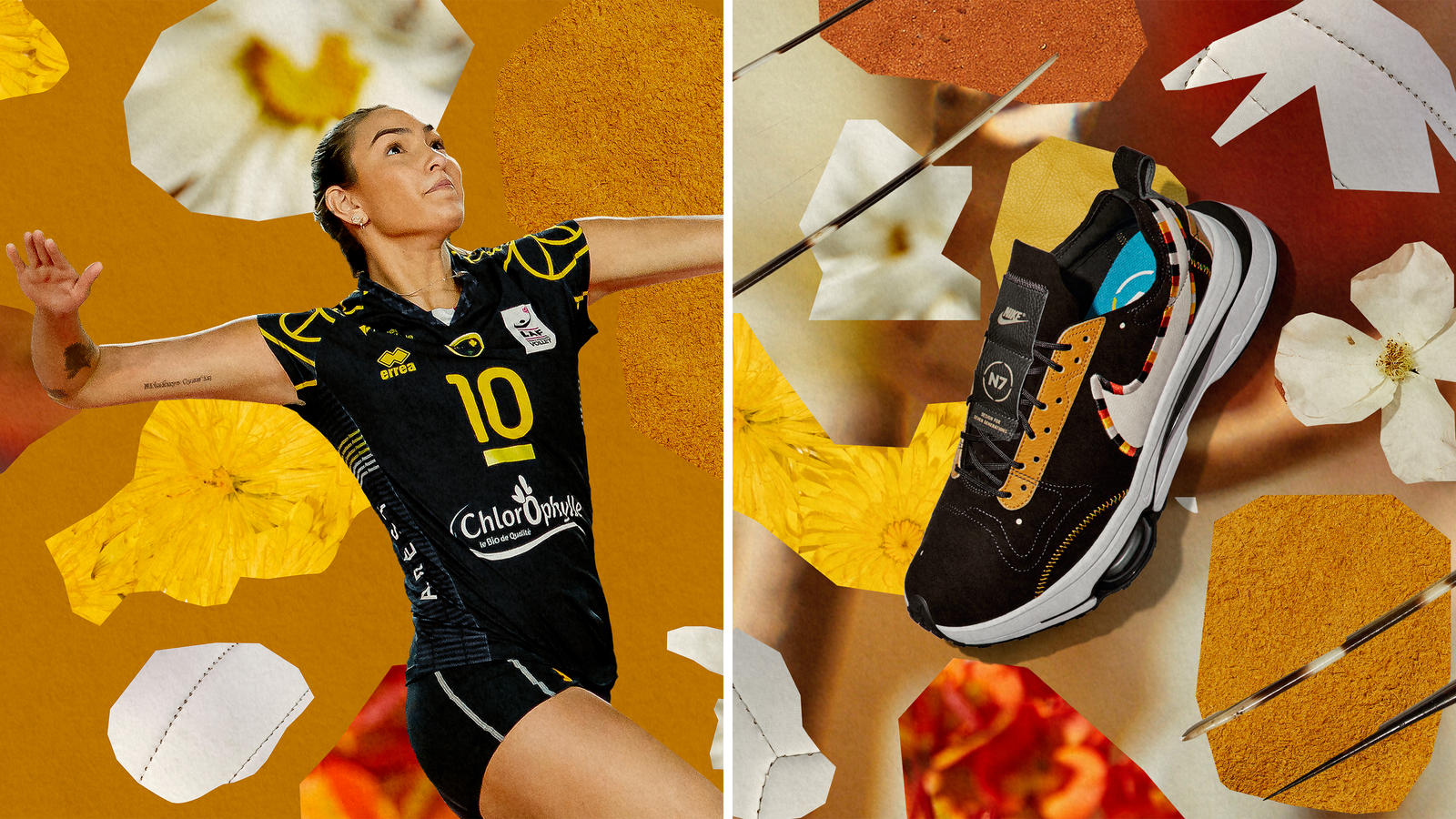 Lauren Schad is originally from the Cheyenne River Lakota Nation and now plays professional volleyball for Nantes, France. Whether she is visiting her Lakota relatives in South Dakota, where she grew up, or traveling overseas for work, she makes a point of using her platform as an athlete to raise awareness on the issue of Missing and Murdered Indigenous Women and Girls, and to educate others about Indigenous people, eradicating stereotypes. The colors of the medicine wheel — a Lakota cultural symbol that represents balance and the four directions — are integrated into the N7 Air Zoom Type by Lauren, which also took inspiration from the intricate porcupine quill art that comes from her tribe. 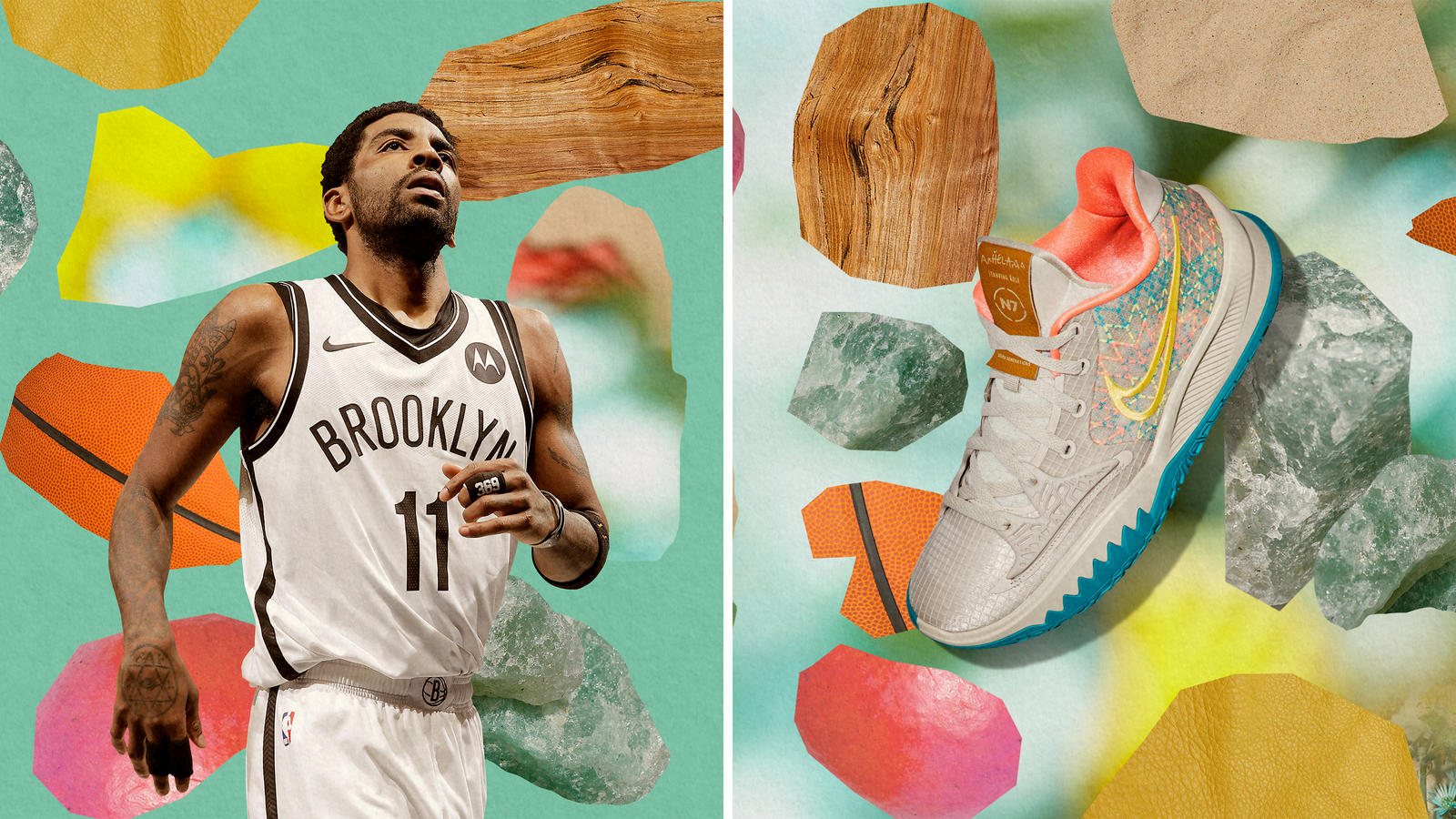 Kyrie Irving, point guard for the Brooklyn Nets, possesses a spiritual rigor that drives him to connect his game and his being with history and social justice. In the past few years, Irving has been on a journey to reconnect with his community from the Standing Rock Sioux Tribe, and in that process he has received his Lakota name, Hela, which means Little Mountain. During Irving's naming ceremony, he was gifted a star quilt, a brightly-colored traditional art form that inspired the colors and stitch detail graphic on his N7 Kyrie Low 4 for the summer collection. 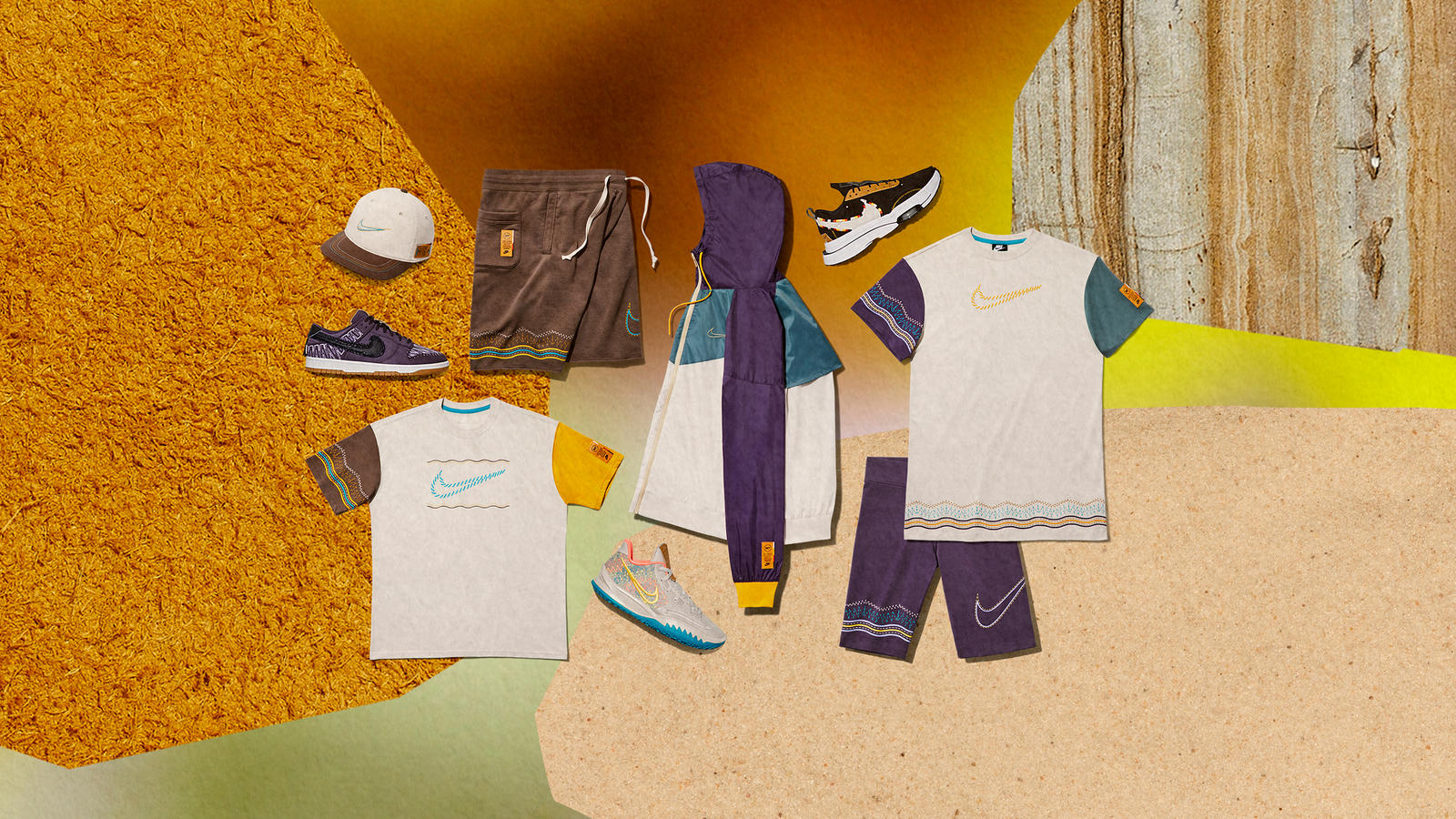 The N7 Collection, featuring select footwear and apparel styles, releases June 21 in the U.S. and Canada at select Nike and Hibbett Sports retail locations and on nike.com.

1. Elements of full-grain leather: “I loved the idea of creating a shoe that has longevity. It’s a material that's intended to last.”
2. Purple colorway: The color represents the wampum shell, a natural oceanic shell from Thompson’s Onondaga nation used for crafting objects like bowls. “Our people used one-dish, one-spoon wampum to make treaties with our allies, but we also used them to make treaties with the Earth.”
3. The braided leather Swoosh: “Our people have been stripped of many parts of their identity throughout history, and one of those ways is through their hair. I wanted the braid to reflect a sense of pride about who we are.”

Learning how to represent comes from keen observation, Thompson says, and happens subtly. A vivid example occurs when kids watch how their mentors show up in the world. He remembers paying close attention to one of his biggest mentors, his older brother Jeremy. He studied Jeremy’s smallest patterns and habits, eager to act more like him in the ways he trained for lacrosse — the way he ran, the way he flicked his wrist on a shovel shot. “All of that knowledge is recycled; I can never take credit for learning it on my own,” Lyle says. “What I can do is pass it to the next generation.”

That’s exactly what Thompson’s 4 the Future Foundation does, using lacrosse to teach Indigenous youth about the values of persistence, respect and joy in sport. This commitment to mentorship is also core to the grantee partnerships made through the N7 Fund, which support Indigenous youth throughout North America with mentorship programs that help kids lead healthier and happier lives. In addition, the grants help deliver services that support education, guide career development and provide essential healthcare needs.

The close observation that takes place through mentorship is a priority across Nike. It’s reflected in programs like Women In Nike, which brings former WNBA players into the company to share an expertise and value system from their playing careers in a corporate environment. In the field of design, the Serena Design Crew and Nike x Design programs match diverse product and apparel talents with Nike designers, working together to lead seasonal capsules.

“My hope for anyone wearing the Dunk is to sense the Indigenous trait of resiliency. We represent a mindset, full of knowledge, that we can give to the world as the first people of North America."

As corporate models, each program relies on listening to the voices of underrepresented groups to help Nike develop a more complete perspective on the world of sport. The silhouettes and apparel in N7 give Nike a similar opportunity to listen — and it's just as true now as it was in 2007, when the first N7 product was released. Through collaborations like Thompson’s Dunk, values can be transposed onto a wearable object.

“My hope for anyone wearing the Dunk is to sense the Indigenous trait of resiliency. We’re a resilient people,” says Thompson. “We represent a mindset, full of knowledge, that we can give to the world as the first people of North America. We represent a strong legacy that insists on showing up again and again despite the history of colonization. We’re proudly Indigenous, and we have a lot to give to the world.”