Back in ’77, an irreverent young company released an ad declaring: “Beating the competition is relatively easy. Beating yourself is a never-ending commitment.” That was Nike and the protagonist was a lone runner doggedly touting a no-finish-line philosophy that has driven the company ever since. Step by step through the ensuing years, Nike products and innovations have adapted to and enabled astonishing athletic feats. On Wednesday, those pace-setting strides led to New York City, where Mark Parker, President & CEO, NIKE, Inc., inaugurated the “Era of Personalized Performance” and unveiled a wave of innovation punctuated by the arrival of the Nike HyperAdapt 1.0, which marks a meta moment akin to the dawn of 1984 or the earthly passing of 2001. Meaning? The future (if not the finish line) is just around the corner.

Within this new frontier emerges evidence of Nike’s progression towards peak expression of its iconic platforms.

The Nike Air VaporMax features Nike’s most advanced Air bag unit to date. It debuts not only more extreme, targeted Air placement but also more Air than ever before. It completely discards a traditional foam midsole, shedding weight and bulk in exchange for better flexibility, without compromising structure. Weight and waste are reduced, and placing the upper directly on the Nike VaporMax Air unit ramps up response. More Air in the shoe means bigger air for you.

Likewise, Nike Zoom Air gets more dialed to the player and the game. On the new Nike Air Zoom KD9, a visible, tapered Zoom Air unit runs from heel to toe for the first time in basketball. Developed over three years of advanced wear testing, the bag — filled with fibers that compress upon each step, then spring back for unrivaled response — is 16 millimeters thick at the heel and progressively narrows to 10 millimeters at the forefoot for superior heel-to-toe impact protection and pop. The Nike Hyperdunk 2016 opts for a uniform Zoom Air unit. Placed directly under foot, it creates a hollow core that generates a trampoline-like snap. 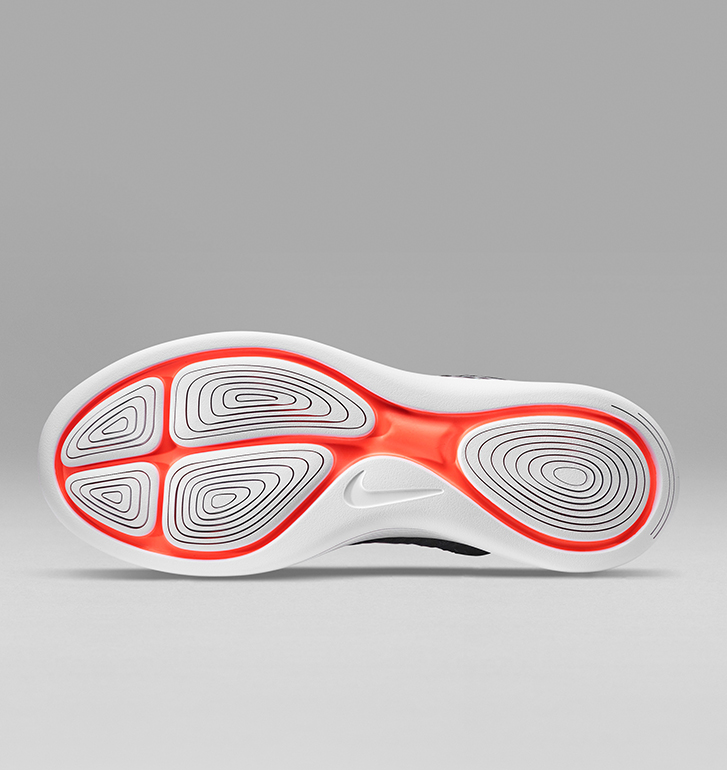 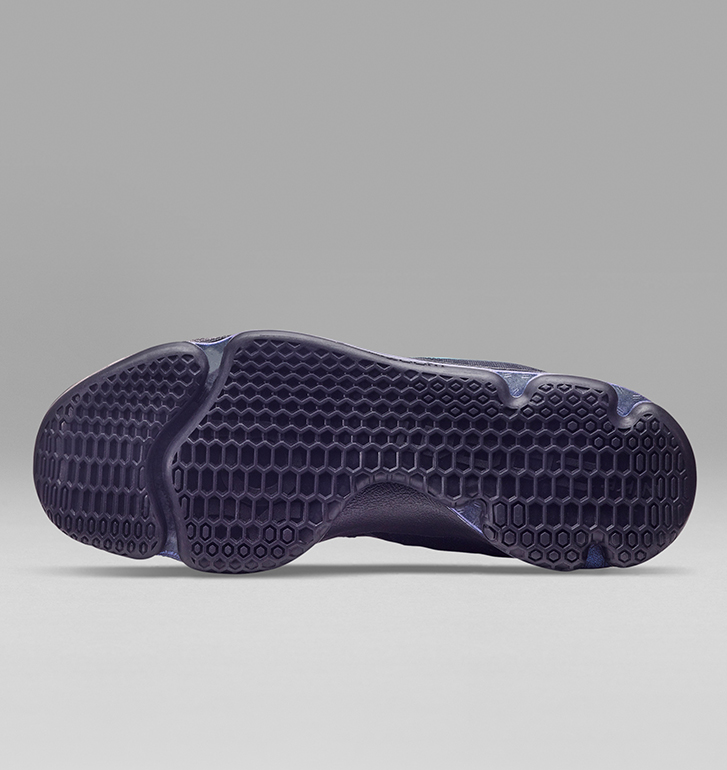 Nike Lunarlon and Nike Free platforms keep pace by debuting a breakthrough dual-injection technology that uses heat instead of glue to fuse two foams into one piece that combines the IU foam carrier and soft IP core previously seen as a two-piece composite. Improved Nike Free tooling, introduced on the new Nike Free RN Motion Flyknit, also mines biometric studies that reveal how the foot expands and contracts upon impact with and liftoff from the ground. The midsole’s splaying geometric units account for the massive changes in foot size — approximately one size in length and two sizes in width — that occur throughout a runner’s stride, making for our most natural ride yet. The new Lunarlon midsole, meanwhile, employs laser side siping and pressure map-inspired pistons for targeted flexibility and better cushioning and energy return.

Four years after its unveiling, Flyknit continues to form the frontline of performance footwear. Nike designers can now engineer each pixel to integrate multiple dimensions of sport-specific benefits, like lightweight strength, breathable structure and elemental defense.

On the Nike LunarEpic Flyknit, these different densities were engineered directly into the knit for a snug fit at the arch, heel and forefoot. A mid-height collar aids lockdown, both physically and sensorially, while integrated Flywire cables supply strength.

On the low-cut Nike Air Zoom KD9, Flyknit takes on a distinct honeycomb structure that accommodates the multidimensional movement of basketball and the shoe’s namesake Kevin Durant’s lateral quickness.

The ultra-high Flyknit upper of the Nike Hyperdunk 2016, meanwhile, enhances a locked-in feeling and includes targeted zones for support or dynamic stretch, correspondingly. Flywire cables in the forefoot offer supplemental support for pivots, cuts and jumps.

The Nike Zoom Superfly Flyknit spike gets even more specific, introducing a knit pattern that provides mid-foot support adapted to the centrifugal force of the track. Plus, the innate construction of Flyknit eliminates the weight associated with traditional cut-and-sew uppers.

on average compared to cut-and-sew footwear

That’s Equivalent to the weight of

Just as a star forward is only one element of a football game-winning equation, revolutionary shoes are merely one component of a greater quest to further human potential. Nike now knows that athletes need a cohesive head-to-toe system that works together to eliminate all meaningful distractions, allowing their minds and bodies to focus solely on the task at hand. This integrated approach drives the company’s design for all sports — from track and field to basketball and beyond — as exemplified by Nike’s new holistic global football system, which fixates on speed.

The system begins with new Nike Vapor Kits with AeroSwift technology, which feature lightweight and breathable shirts and shorts knit from new, textured high-performance yarn that makes them 10% lighter, with 50% more stretch than previous kits. Using a new knitting process that integrates single and double knit to enhance breathability, stretch and fit, the kits impress even Cristiano Ronaldo, who declares, “This new kit makes us feel lighter and more agile.”

The same zero-distraction ethos next extends to the design of Nike Hyperstrong Match Sleeves. Modified to today’s game, the new sleeve incorporates additional ankle reinforcements and protection pads in high-risk areas, without inhibiting agility. They also pair with new NikeGRIP socks, which propose a two-sided solution that integrates more traction at key contact points via the sock’s nano-fiber. Working in harmony with the microfiber liner on Nike Football boots, the socks help prevent the foot from sliding.

The final element, the boot, extends to Nike’s entire stable of football footwear, including the new Nike Mercurial Superfly. Specifically conceived for speed, it debuts its own pace-promoting system, which begins with a Flyknit upper featuring a 3D speed-rib texture. Made to generate ball friction, the raised upper joins forces with a 40% lighter anatomical plate that maps the natural contours of the foot for a stronger response through swifter play. Finally, a claw-like breaking system keeps velocity controlled. 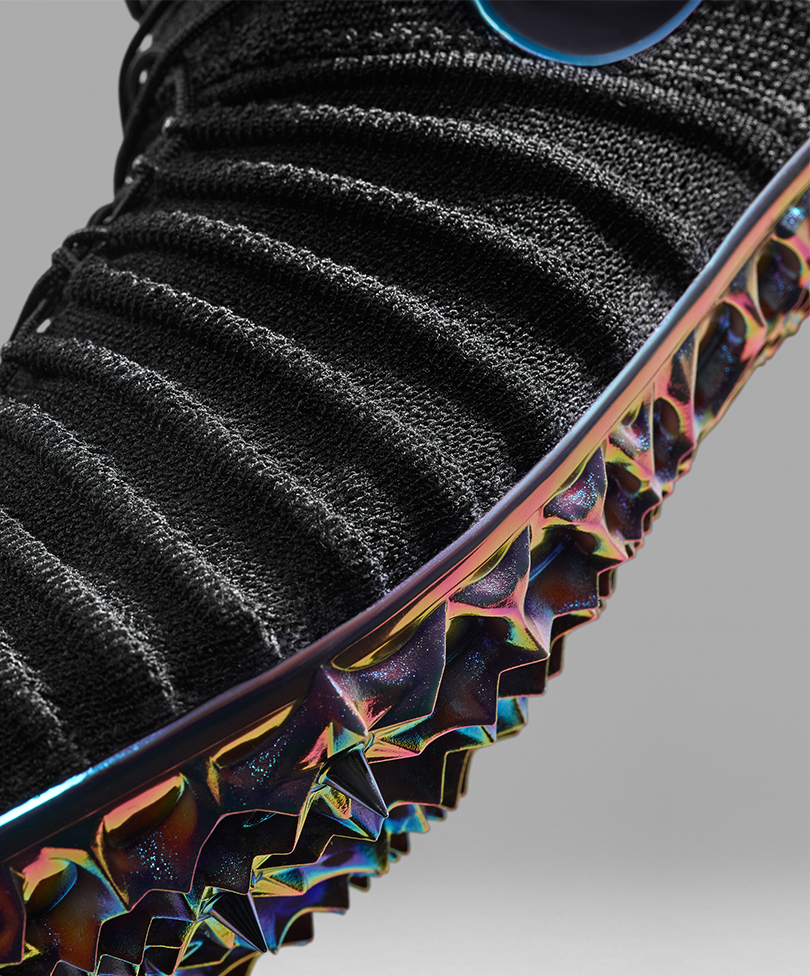 From pitch to court to street, these industry-defining designs result from listening to the voice of the athlete, the stated starting point of all design and innovation at Nike. Sometimes that voice is internal — the body feeling weary — which can lead to explorations like Nike’s collection of zoned performance tights; each features areas of compression, stretch and breathability where respectively needed. Sometimes that voice is forthright — a common call from athletes — and can lead to innovations like Nike Anti-Clog Traction, a (literally) game-changing innovation that helps prevent mud from sticking to the soleplate of Nike football boots via an adaptive polymer that becomes compliant when exposed to water.

Still, those elements of the athlete’s voice are often only part of the equation. It is also heard through data-driven insights and observations. That voice, then, initiates conversations between the athlete and Nike designers, materials experts, trainers and more, who together distill the cacophony into redefining designs. Take the Nike Zoom Superfly Flyknit spike.

Created in collaboration with Allyson Felix, the spike manifested from a holistic exchange between the gold-medal sprinter and an assembly of hyper-specialized experts, including members of the NSRL (Nike Sport Research Lab) and Nike Flyknit engineers, who embarked on the ultimate exploration of fit and feel to advance performance.

Working off of Felix’s insights, they employed computational design to dial the spike plate to her prescribed flex and fit, with a new last created from a 3D print of Felix’s foot. Next, Flyknit engineers translated the feel Felix favors in her everyday Flyknit trainers into race-ready uppers. Pixel by pixel, they adapted the knit to reduce volume and extend the upper to a three-quarter height that helps support a larger portion of the foot and facilitates fluidity in motion. The result, in Felix’s own words, “feels like an extension of your foot.”

TIP OF THE ICEBERG

If the Nike Zoom Superfly Flyknit is encouraging one athlete to push beyond her perceived limits, another new Nike innovation, the Nike HyperAdapt 1.0, is actively redefining reality. The first performance vehicle for sport-informed adaptive lacing, the Nike HyperAdapt 1.0 challenges traditional interpretations of fit, proposing an ultimate solution to individual idiosyncrasies in lacing and tension preferences — and it’s just the tip of the adaptive iceberg. 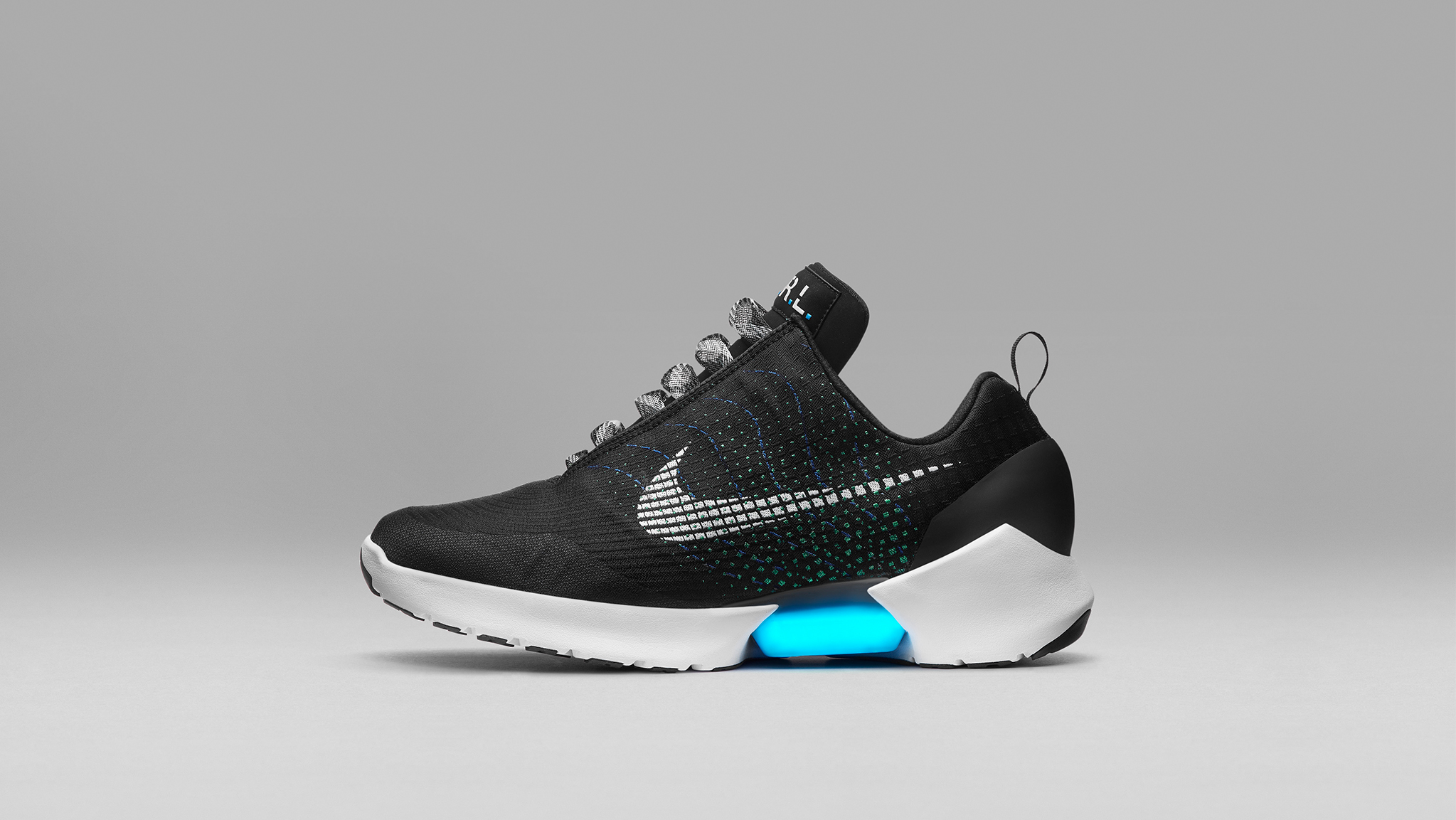 Once a hyper-personalized design like the Nike Zoom Superfly Flyknit is realized or a once-fantastical technology like the Nike HyperAdapt 1.0 comes to life, the finish line is again reset. The challenge becomes how to bring this same level of personalized performance and inspiration to all athletes — a goal Nike pursues through the new Nike+ app, which offers users an all-access pass to their potential.

Where most apps view users as data-input systems, the new Nike+ app, as Parker puts it, is more than a “dashboard.” It’s a personal relationship.

“Once a design like the Nike Zoom Superfly Flyknit is realized or a technology like adaptive lacing comes to life, the finish line is again reset.”

The app simplifies access to the coveted product that has long defined Nike’s position atop sport culture. It also provides easy entree to everything else athletes require to reach their potential, including customized recommendations, guided workouts, motivational music mixes and rare invitations.