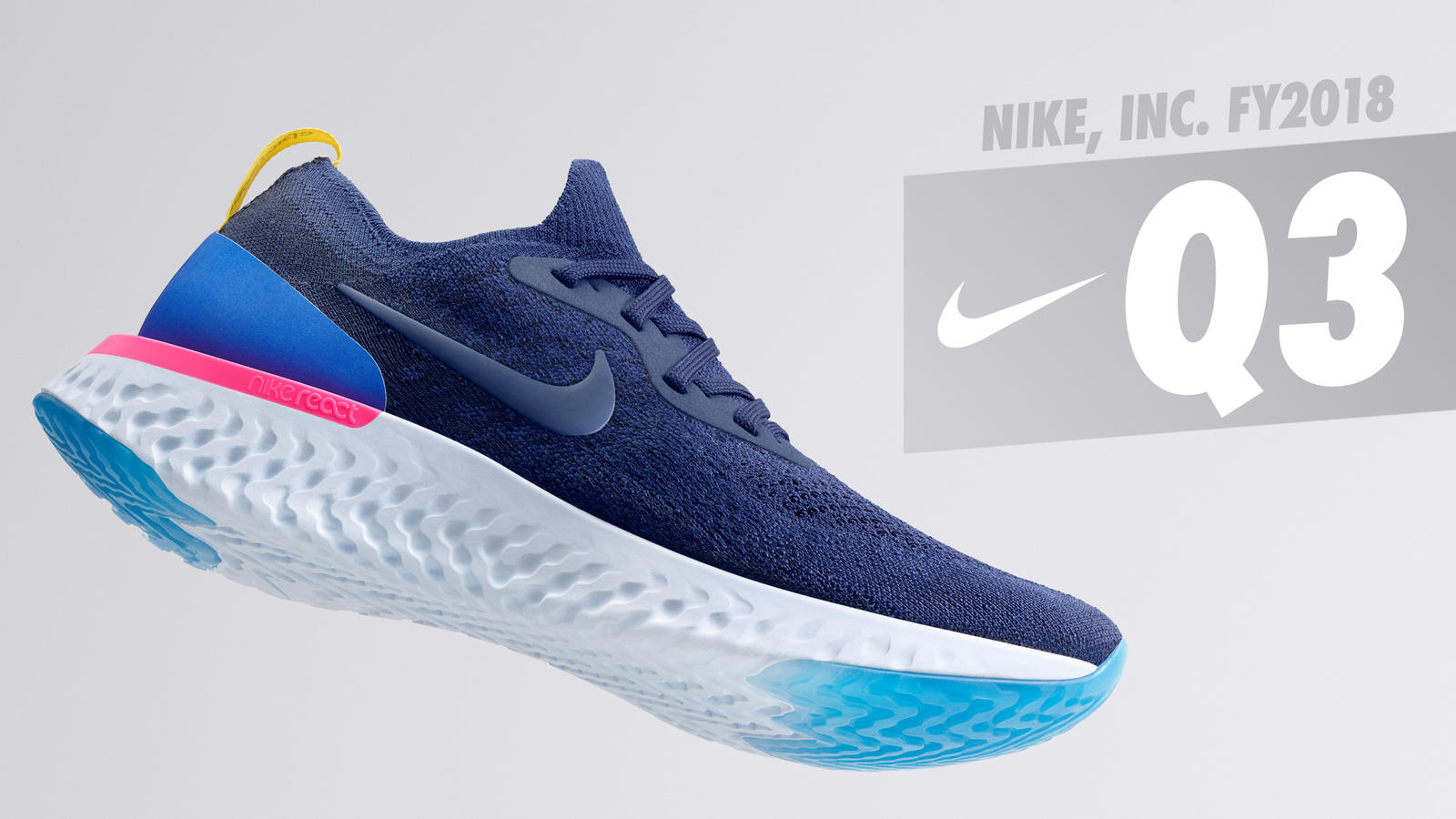 Diluted net loss per share was $0.57, reflecting significantly higher income tax expense from the enactment of the Tax Cuts and Jobs Act (the “Tax Act”). The impact of the Tax Act resulted in one-time provisional charges that reduced diluted earnings per share by $1.25.

Revenues for NIKE, Inc. increased 7 percent to $9.0 billion, up 3 percent on a currency-neutral basis.**

Revenues for the NIKE Brand were $8.5 billion, up 4 percent on a currency-neutral basis, driven by Greater China, EMEA and APLA, including double-digit growth in NIKE Direct and growth in Sportswear and NIKE Basketball.
Revenues for Converse were $483 million, down 8 percent on a currency-neutral basis, as international and digital growth were more than offset by declines in North America.

Income before income taxes decreased 12 percent to $1.2 billion as solid revenue growth was more than offset by lower gross margin, higher selling and administrative expense and lower other income.

The effective tax rate was 179.5 percent, driven by the Tax Act, which impacted comparability. During the quarter, as a result of enactment of the Tax Act on December 22, 2017, the Company recorded additional income tax expense of $2.0 billion primarily related to the transition tax on our accumulated foreign earnings and the remeasurement of deferred tax assets and liabilities. This amount was recorded as a provisional estimate and is subject to change as the Company completes its analysis during the measurement period, which should not extend beyond one year from the enactment date.

Net loss was $921 million and diluted net loss per share was $0.57, driven by the enactment of the Tax Act.

Inventories for NIKE, Inc. were $5.4 billion, up 9 percent from February 28, 2017, driven primarily by strengthening demand globally and, to a lesser extent, changes in foreign currency exchange rates.

Cash and equivalents and short-term investments were $4.8 billion, $1.4 billion lower than last year as share repurchases, dividends and investments in infrastructure more than offset net income and proceeds from employee exercises of stock options.

NIKE, Inc. management will host a conference call beginning at approximately 2:00 p.m. PT on March 22, 2018, to review fiscal third quarter results. The conference call will be broadcast live via webcast and can be accessed at http://investors.nike.com. For those unable to listen to the live broadcast, an archived version will be available at the same location through 9:00 p.m. PT, March 29, 2018.

Download the PDF of the FY18 Q3 Press Release and Schedules