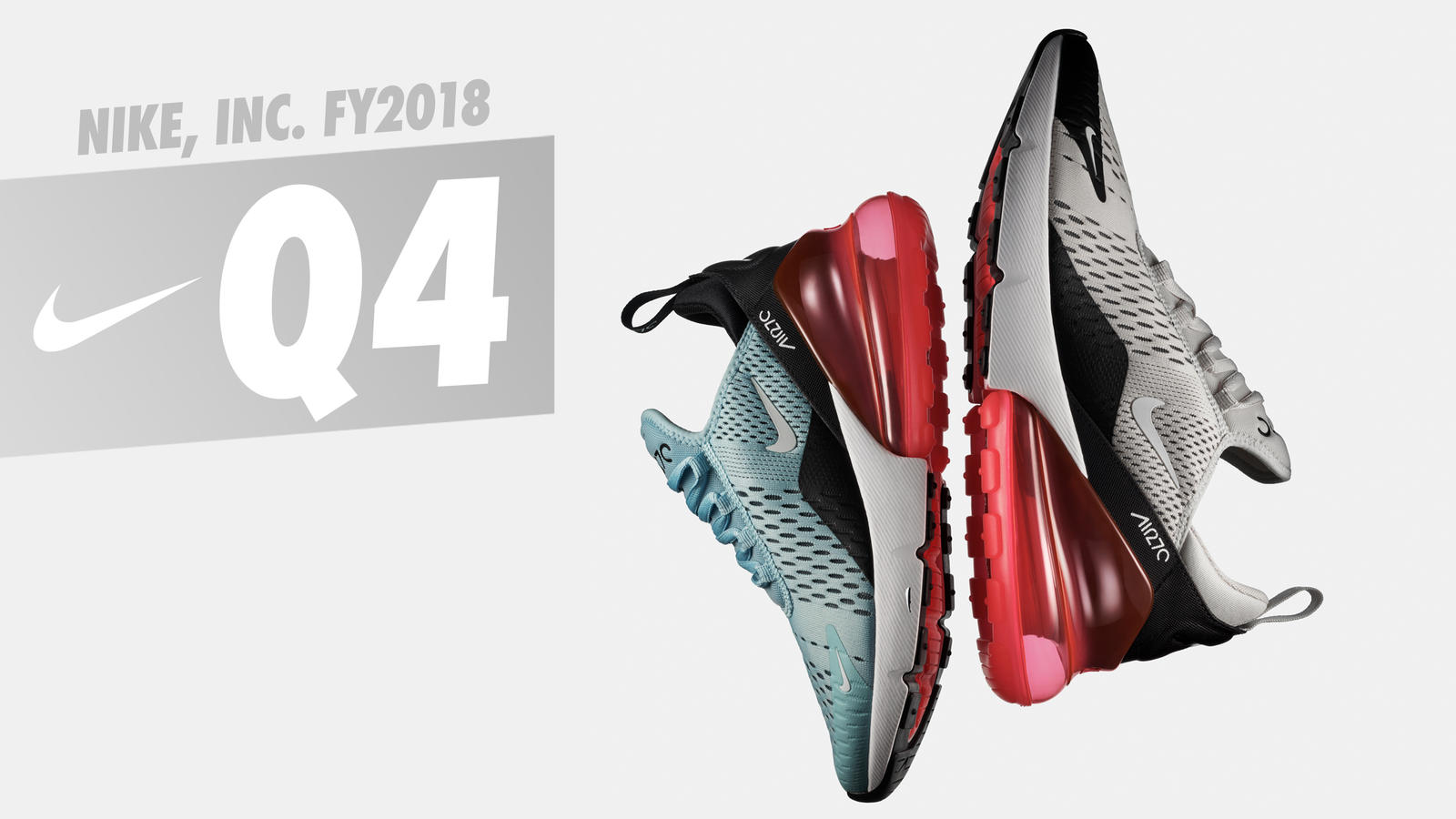 Fourth quarter revenue increased 13 percent to $9.8 billion driven by strong double-digit revenue growth in international markets and NIKE Direct globally, and a return to growth in North America. Diluted earnings per share for the fourth quarter rose 15 percent to $0.69, primarily due to strong revenue growth, gross margin expansion, a lower tax rate and a lower average share count, which were partially offset by higher selling and administrative expense.

“Our new innovation is winning with consumers, driving significant momentum in our international geographies and a return to growth in North America,” said Mark Parker, Chairman, President and CEO, NIKE, Inc. “Fueled by a complete digital transformation of our company end-to-end, this year set the foundation for Nike’s next wave of long-term, sustainable growth and profitability.”*

The Company also announced that its Board of Directors has authorized a new four-year, $15 billion program to repurchase shares of NIKE’s Class B Common Stock. The Company anticipates that the current $12 billion share repurchase program will be completed within fiscal 2019, and the new program will commence upon the completion of the current program.*

Revenues for NIKE, Inc. rose 6 percent to $36.4 billion, up 4 percent on a currency-neutral basis.

Also, on a currency-neutral basis:
• Revenues for the NIKE Brand were $34.5 billion, up 5 percent.

• NIKE Brand revenue growth was driven by continued strength in international markets and NIKE Direct with growth across footwear and apparel and key categories including Sportswear and NIKE Basketball.

• Revenues for Converse were $1.9 billion, down 11 percent, as growth in Asia was more than offset by declines primarily in North America.

Selling and administrative expense increased 9 percent to $11.5 billion. Demand creation expense was $3.6 billion, up 7 percent, primarily due to sports marketing investments. Operating overhead expense rose 10 percent to $7.9 billion, largely due to investments to activate the Consumer Direct Offense including product innovation and digital and speed capabilities.

The effective tax rate was 55.3 percent, compared to 13.2 percent in fiscal 2017 due to significant charges related to the enactment of the Tax Act.

Net income decreased 54 percent to $1.9 billion primarily related to the impact of the Tax Act, which offset strong revenue growth. Diluted earnings per share decreased 53 percent to $1.17, which includes a decline in the weighted average diluted common shares outstanding.

During the fourth quarter, NIKE, Inc. repurchased a total of 23.1 million shares for approximately $1.6 billion as part of the four-year, $12 billion program approved by the Board of Directors in November 2015. As of May 31, 2018, a total of 149.4 million shares had been repurchased under this program for approximately $8.7 billion. The Company’s new $15 billion program will commence upon the completion of the existing program which is expected to be completed within fiscal 2019. Repurchases under the Company’s new program will be made in open market or privately negotiated transactions in compliance with Securities and Exchange Commission Rule 10b-18, subject to market conditions, applicable legal requirements and other relevant factors. The new share repurchase program does not obligate the Company to acquire any particular amount of common stock, and it may be suspended at any time at the Company’s discretion.

NIKE, Inc. management will host a conference call beginning at approximately 2:00 p.m. PT on June 28, 2018, to review fiscal fourth quarter and full year results. The conference call will be broadcast live via webcast and can be accessed at http://investors.nike.com. For those unable to listen to the live broadcast, an archived version will be available at the same location through 9:00 p.m. PT, July 12, 2018.