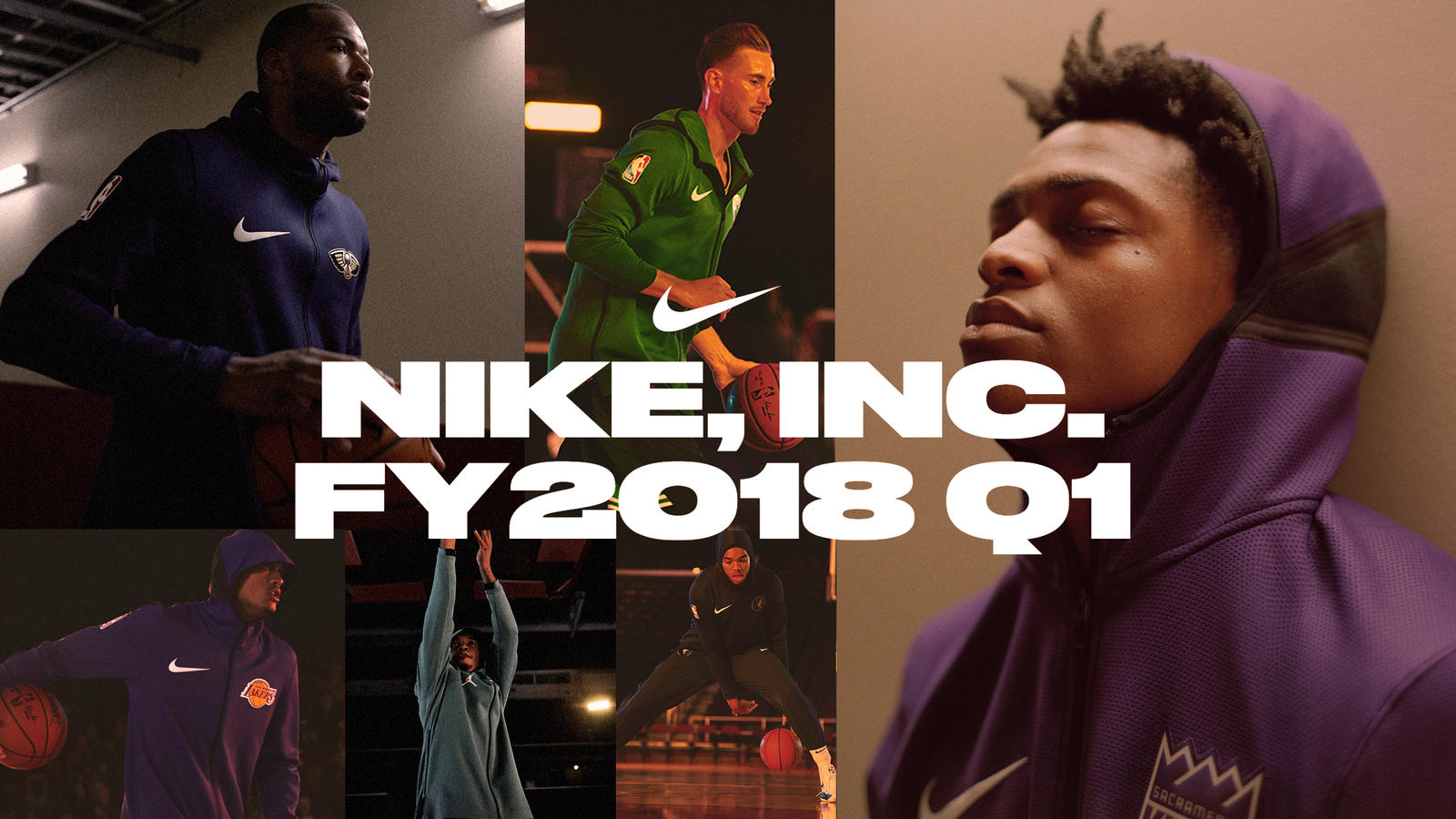 Diluted earnings per share for the quarter were $0.57, down 22 percent driven by a gross margin decline, a higher effective tax rate and higher other expense, net, partially offset by lower selling and administrative expense and a lower average share count.

“This quarter, we captured near-term opportunities through our new Consumer Direct Offense,” said Mark Parker, Chairman, President and CEO, NIKE, Inc. “Looking ahead to the rest of fiscal 2018, we will ignite NIKE’s next horizon of global growth through the strength of our brand, the power of our innovative products and the most personal, digitally-connected experiences in our industry.”*

As previously announced on June 15, 2017, a new company alignment was created as a result of the Consumer Direct Offense which simplified NIKE Brand’s geography structure from six geographies to four consisting of North America; Europe, Middle East & Africa (EMEA); Greater China; and Asia Pacific & Latin America (APLA). The financial results for the NIKE Brand are now reported based on these four operating segments.

Revenues for NIKE, Inc. were $9.1 billion, flat to prior year on both a reported and currency- neutral basis.**

Gross margin declined 180 basis points to 43.7 percent due primarily to unfavorable changes in foreign currency exchange rates and, to a lesser extent, a higher mix of off-price sales.

The effective tax rate was 11.4 percent, compared to 2.5 percent for the same period last year, reflecting the tax benefit from stock-based compensation in the current period as a result of the adoption of Accounting Standards Update 2016-09. The prior year period included a one-time benefit related to the resolution with the IRS of a foreign tax credit matter.

Net income decreased 24 percent to $950 million as lower selling and administrative expense was offset by a gross margin decline, a higher effective tax rate and growth in other expense, net, while diluted earnings per share decreased 22 percent from the prior year to $0.57 reflecting a nearly 2 percent decline in the weighted average diluted common shares outstanding.

Inventories for NIKE, Inc. were $5.2 billion, up 6 percent from August 31, 2016, driven by a higher average cost per unit primarily due to product mix and, to a lesser extent, changes in foreign currency exchange rates and growth in NIKE Direct businesses.

Cash and equivalents and short-term investments were $5.5 billion, $732 million higher than last year as net income and proceeds from the issuance of debt in the second quarter of fiscal 2017 were partially offset by share repurchases, dividends and investments in infrastructure.

NIKE, Inc. management will host a conference call beginning at approximately 2:00 p.m. PT on September 26, 2017, to review fiscal first quarter results. The conference call will be broadcast live over the Internet and can be accessed at http://investors.nike.com. For those unable to listen to the live broadcast, an archived version will be available at the same location through 9:00 p.m. PT, October 3, 2017.