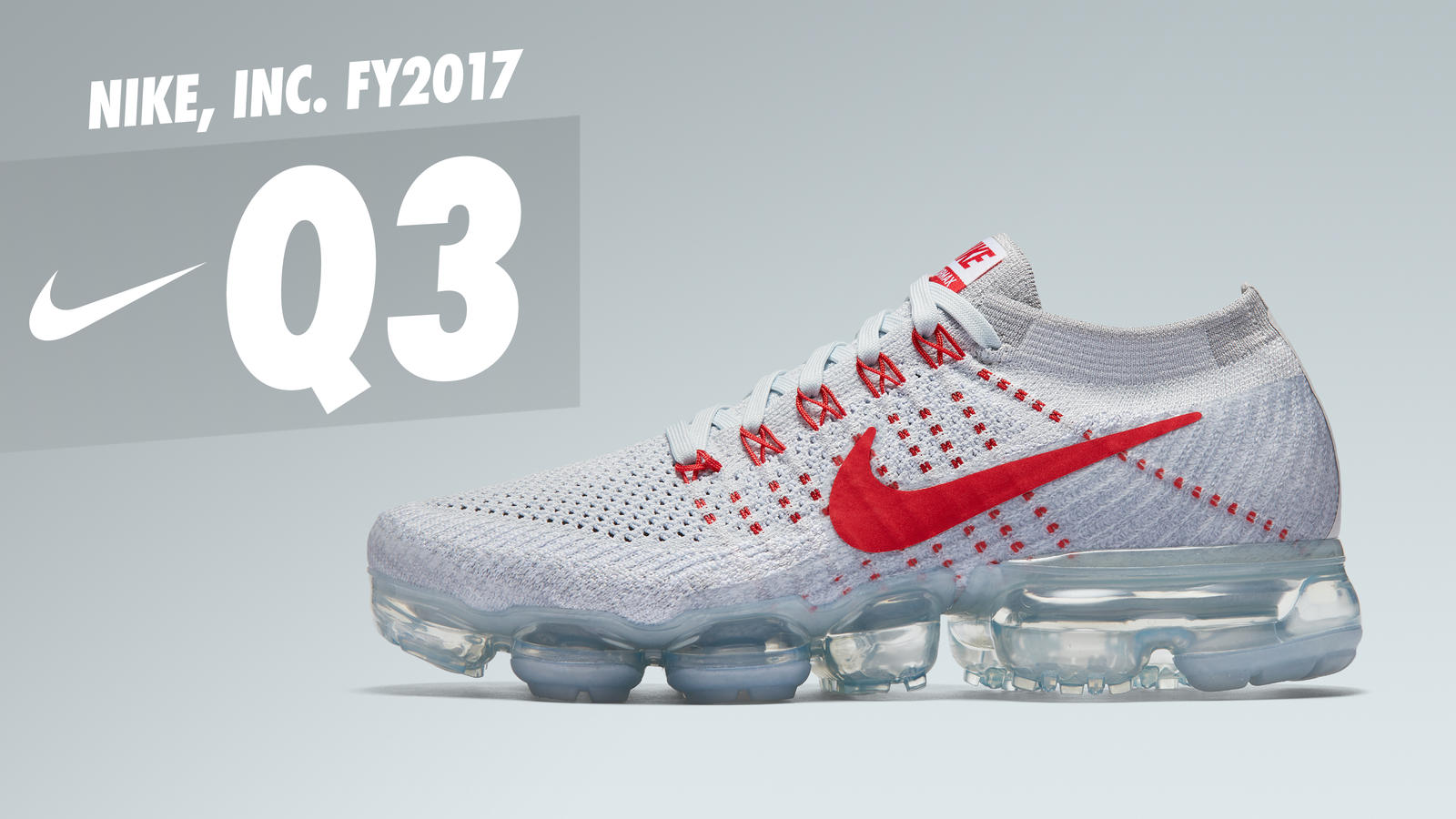 “The power of NIKE’s diverse, global portfolio delivered another solid quarter of growth and profitability,” said Mark Parker, Chairman, President and CEO, NIKE, Inc. “To expand our leadership and ignite NIKE’s next phase of growth, we’re delivering a relentless flow of innovation through performance and style, increasing speed throughout the business and creating more direct connections with consumers leveraging digital and membership.”**

Revenues for NIKE, Inc. increased 5 percent to $8.4 billion, up 7 percent on a currency-neutral basis.

Selling and administrative expense decreased 3 percent to $2.5 billion. Demand creation expense was $749 million, down 7 percent as fiscal 2017 spend was weighted towards the first six months due to significant investments around the Olympics and the European Championships. Operating overhead expense decreased 1 percent to $1.7 billion, as continued investments in Direct-to-Consumer (DTC) were offset by lower bad debt expense compared to the prior year and lower administrative costs as Edit-to-Amplify initiatives are driving productivity in core operational spending.

Other income, net was $88 million comprised primarily of net foreign currency exchange gains, and to a lesser extent, non-operating items.

The effective tax rate was 13.8 percent, compared to 16.3 percent for the same period last year, primarily due to a reduction in tax reserves and an increase in the mix of earnings from operations outside of the U.S., which are generally subject to a lower tax rate.

Inventories for NIKE, Inc. were $4.9 billion, up 7 percent compared to the prior year as a 3 percent decrease in NIKE Brand wholesale unit inventories was offset by increases in average product costs per unit and higher inventories associated with growth in DTC.

Cash and short-term investments were $6.2 billion, $1.1 billion higher than the prior year as growth in net income and proceeds from the issuance of debt in the second quarter of fiscal 2017 as well as proceeds from employee exercises of stock options more than offset share repurchases, higher dividends and investments in infrastructure.

Worldwide futures orders for the NIKE Brand will be referenced on our earnings conference calls as deemed appropriate. NIKE Brand and geography Futures Orders growth versus the prior year will be posted on the NIKE, Inc. Investor Relations website at http://investors.nike.com following the call.

NIKE, Inc. management will host a conference call beginning at approximately 2:00 p.m. PT on March 21, 2017, to review fiscal third quarter results. The conference call will be broadcast live over the Internet and can be accessed at http://investors.NIKE.com. For those unable to listen to the live broadcast, an archived version will be available at the same location through 9:00 p.m. PT, March 28, 2017.