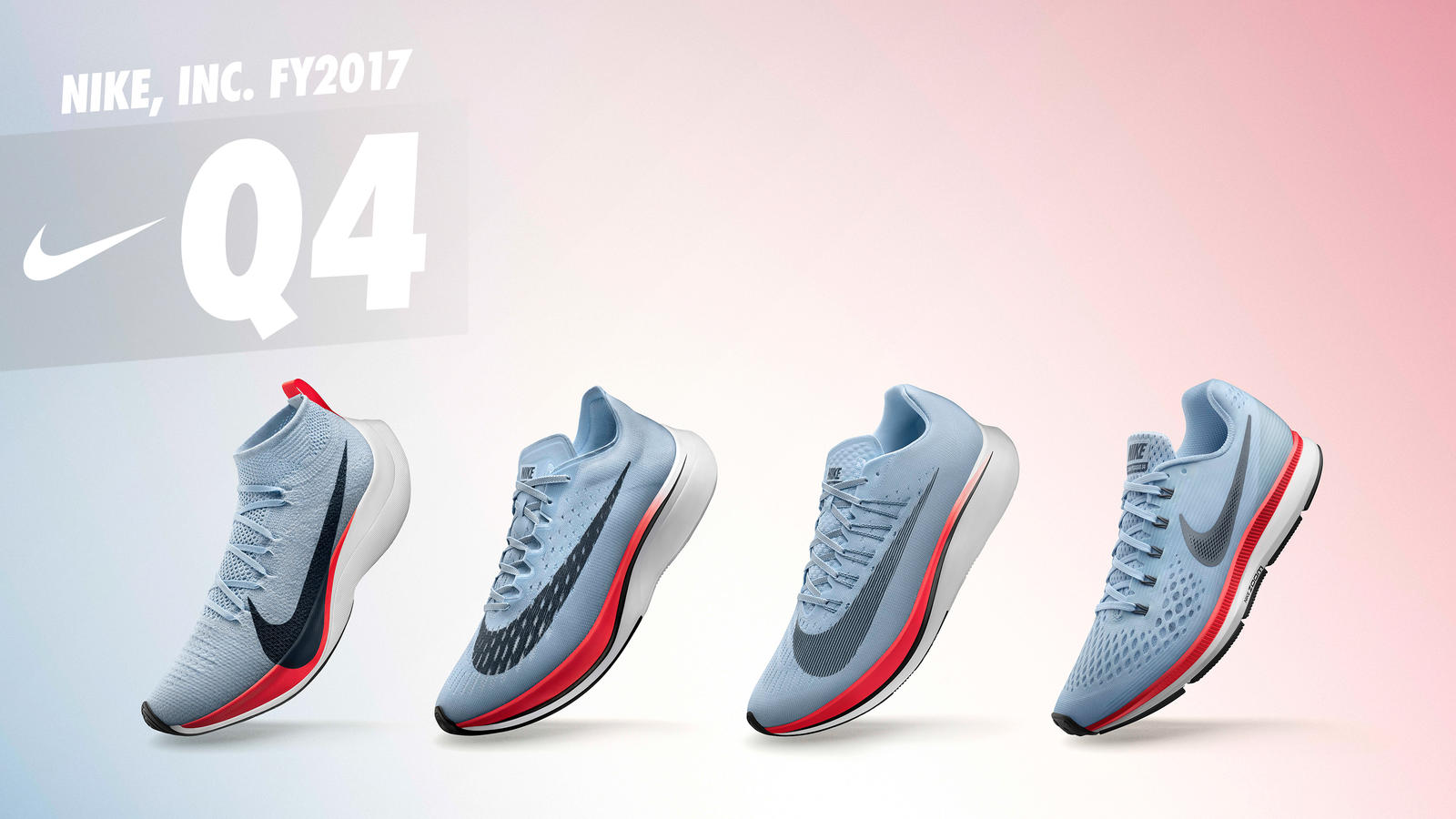 Diluted earnings per share for the quarter rose 22 percent to $0.60 driven by global revenue growth, lower selling and administrative expense, a lower tax rate and a lower average share count which were slightly offset by lower gross margin.

“NIKE continues to create both near-term wins in today’s dynamic environment and a lasting foundation for future growth,” said Mark Parker, Chairman, President and CEO, NIKE, Inc. “Through our Consumer Direct Offense, we’re putting even more firepower behind our greatest opportunities in Fiscal 2018. It will be a big year for NIKE innovation and we’ll bring those stories to life through deeper consumer connections in our key cities around the world.”**

Revenues for NIKE, Inc. rose 5 percent to $8.7 billion, up 7 percent on a currency-neutral basis.

Revenues for the NIKE Brand were $8.1 billion, up 7 percent on a currency-neutral basis driven by double-digit growth in Western Europe, Greater China, and the Emerging Markets, and strong growth in Sportswear and Running.

Revenues for Converse were $554 million, up 10 percent on a currency-neutral basis, primarily driven by the market transition in Italy and growth in DTC.

Selling and administrative expense decreased 4 percent to $2.7 billion. Demand creation expense was $789 million, down 10 percent, as fiscal 2017 spend was weighted towards the beginning of the year due to significant investments around the Olympics and the European Football Championship. Operating overhead expense decreased 1 percent to $1.9 billion, as continued investments in DTC were offset by administrative cost efficiencies.

The effective tax rate was 13.7 percent, compared to 21.2 percent for the same period last year, primarily due to an increase in the proportion of earnings from operations outside of the United States, which are generally subject to a lower tax rate.

Net income increased 19 percent to $1.0 billion primarily due to global revenue growth, lower selling and administrative expense and a lower tax rate which were slightly offset by a gross margin decline, while diluted earnings per share increased 22 percent to $0.60 reflecting a nearly 3 percent decline in the weighted average diluted common shares outstanding.

Revenues for NIKE, Inc. rose 6 percent to $34.4 billion, up 8 percent on a currency-neutral basis.

Also, on a currency-neutral basis:

Revenues for the NIKE Brand were $32.2 billion, up 8 percent.

NIKE Brand sales to wholesale customers increased 5 percent while DTC revenues grew to $9.1 billion, up 18 percent, driven by a 30 percent increase in digital commerce sales, the addition of new stores and 7 percent growth in comparable store sales. As of May 31, 2017, the NIKE Brand had 985 DTC stores in operation as compared to 919 a year ago.

NIKE Brand revenue growth was driven by growth in every geography as well as key categories including Sportswear, Running and the Jordan Brand.

Revenues for Converse were $2.0 billion, up 6 percent, driven by growth in the United States and Europe due to the market transition in Italy.

Selling and administrative expense increased 1 percent to $10.6 billion. Demand creation expense was $3.3 billion, up 2 percent, primarily due to higher sports marketing costs and significant investments around the Olympics and the European Football Championship in the first half of the fiscal year. Operating overhead expense remained flat at $7.2 billion, as continued investments in DTC were offset by administrative cost efficiencies and lower variable compensation.

The effective tax rate was 13.2 percent, compared to 18.7 percent for the same period last year primarily due to a one-time benefit in the first quarter of the fiscal year related to the resolution with the U.S. Internal Revenue Service of a foreign tax credit matter, and a decrease in foreign earnings taxed in the U.S.

Net income increased 13 percent to $4.2 billion reflecting strong global revenue growth, selling and administrative expense leverage and a lower tax rate which were slightly offset by a decline in gross margin. Diluted earnings per share increased 16 percent to $2.51, reflecting growth in net income and the additional benefit of a decline in the weighted average diluted common shares outstanding.

Inventories for NIKE, Inc. were $5.1 billion, up 4 percent from May 31, 2016, as a 3 percent decrease in NIKE Brand wholesale unit inventories was more than offset by increases in average product cost per unit and growth in our DTC businesses.

Cash and short-term investments were $6.2 billion, $722 million higher than last year as growth in net income, proceeds from the issuance of debt in the second quarter of fiscal 2017 and proceeds from employee exercises of stock options were partially offset by share repurchases, dividends, and investments in infrastructure and working capital.

NIKE, Inc. management will host a conference call beginning at approximately 2:00 p.m. PT on June 29, 2017, to review fiscal fourth quarter and full year results. The conference call will be broadcast live over the Internet and can be accessed at http://investors.nike.com. For those unable to listen to the live broadcast, an archived version will be available at the same location through 9:00 p.m. PT, July 6, 2017.