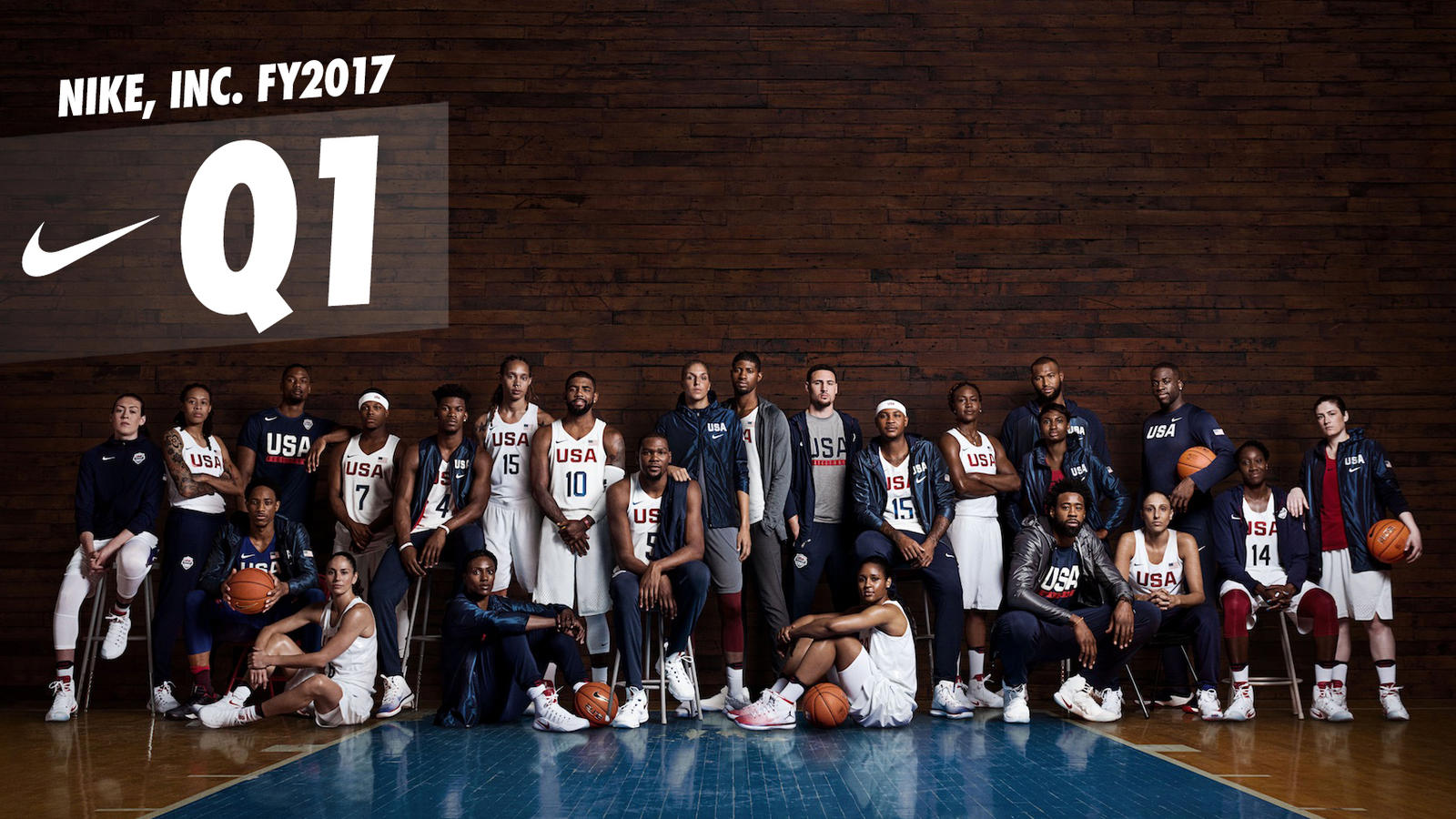 Diluted earnings per share for the quarter were $0.73, up 9 percent driven by strong revenue growth, operating overhead leverage, a lower effective tax rate and a lower average share count partially offset by a gross margin decline and higher demand creation expense in an Olympic quarter.

“Fueled by an incredible summer of sport, NIKE delivered strong global growth—and led the industry through disruptive innovation,” said Mark Parker, Chairman, President and CEO, NIKE, Inc. “Q1 also showed how we’re amplifying every category through sports style innovation, transforming retail by connecting the digital and physical experience and ushering in a new Era of Personalized Performance – through product, consumer connections and our supply chain. NIKE’s strategic investments in these growth opportunities continue to deliver long-term value to our shareholders.”**

Revenues for NIKE, Inc. rose 8 percent to $9.1 billion, up 10 percent on a currency-neutral basis.

Revenues for the NIKE Brand were $8.5 billion, up 10 percent on a currency-neutral basis driven by double-digit growth in Greater China, Western Europe, Emerging Markets, Central & Eastern Europe and Japan, including strong growth in Sportswear, Running and the Jordan Brand.

Revenues for Converse were $574 million, up 4 percent on a currency-neutral basis, mainly driven by growth in North America which was slightly offset by declines in Europe and Asia Pacific.

Gross margin declined 200 basis points to 45.5 percent as higher average selling prices were more than offset by several temporary or discrete items including foreign exchange, a shift of expenses from Operating Overhead to Cost of Goods Sold, a higher off-price mix and the impact of exiting the Golf equipment business.

The effective tax rate was 2.5 percent, compared to 18.4 percent for the same period last year, primarily due to a one-time benefit related to the resolution with the U.S. Internal Revenue Service of a foreign tax credit matter.

Inventories for NIKE, Inc. were $4.9 billion, up 11 percent from August 31, 2015, driven by a 3 percent increase in NIKE Brand wholesale unit inventories, increases in average product cost per unit, and growth in the DTC business.

Cash and short-term investments were $4.8 billion, $621 million lower than last year as growth in net income and proceeds from the issuance of debt in the second quarter of fiscal 2016 were more than offset by share repurchases, investments in working capital and infrastructure, higher dividends, and a reduction in collateral received from counterparties to foreign currency hedging instruments.

As of August 31, 2016, worldwide futures orders for NIKE Brand athletic footwear and apparel scheduled for delivery from September 2016 through January 2017 totaled $12.3 billion, 5 percent higher than orders reported for the same period last year, and 7 percent higher on a currency-neutral basis.**

NIKE, Inc. management will host a conference call beginning at approximately 2:00 p.m. PT on September 27, 2016, to review fiscal first quarter results. The conference call will be broadcast live over the Internet and can be accessed at http://investors.nike.com. For those unable to listen to the live broadcast, an archived version will be available at the same location through 9:00 p.m. PT, October 4, 2016.

** The marked paragraphs contain forward-looking statements that involve risks and uncertainties that could cause actual results to differ materially. These risks and uncertainties are detailed from time to time in reports filed by NIKE with the Securities and Exchange Commission (SEC), including Forms 8-K, 10-Q, and 10-K. Some forward-looking statements in this release concern changes in futures orders that are not necessarily indicative of changes in total revenues for subsequent periods due to the mix of futures, “at once” and closeout orders, exchange rate fluctuations, order cancellations, discounts and returns, which may vary significantly from quarter to quarter, and because a portion of the business does not report futures orders.