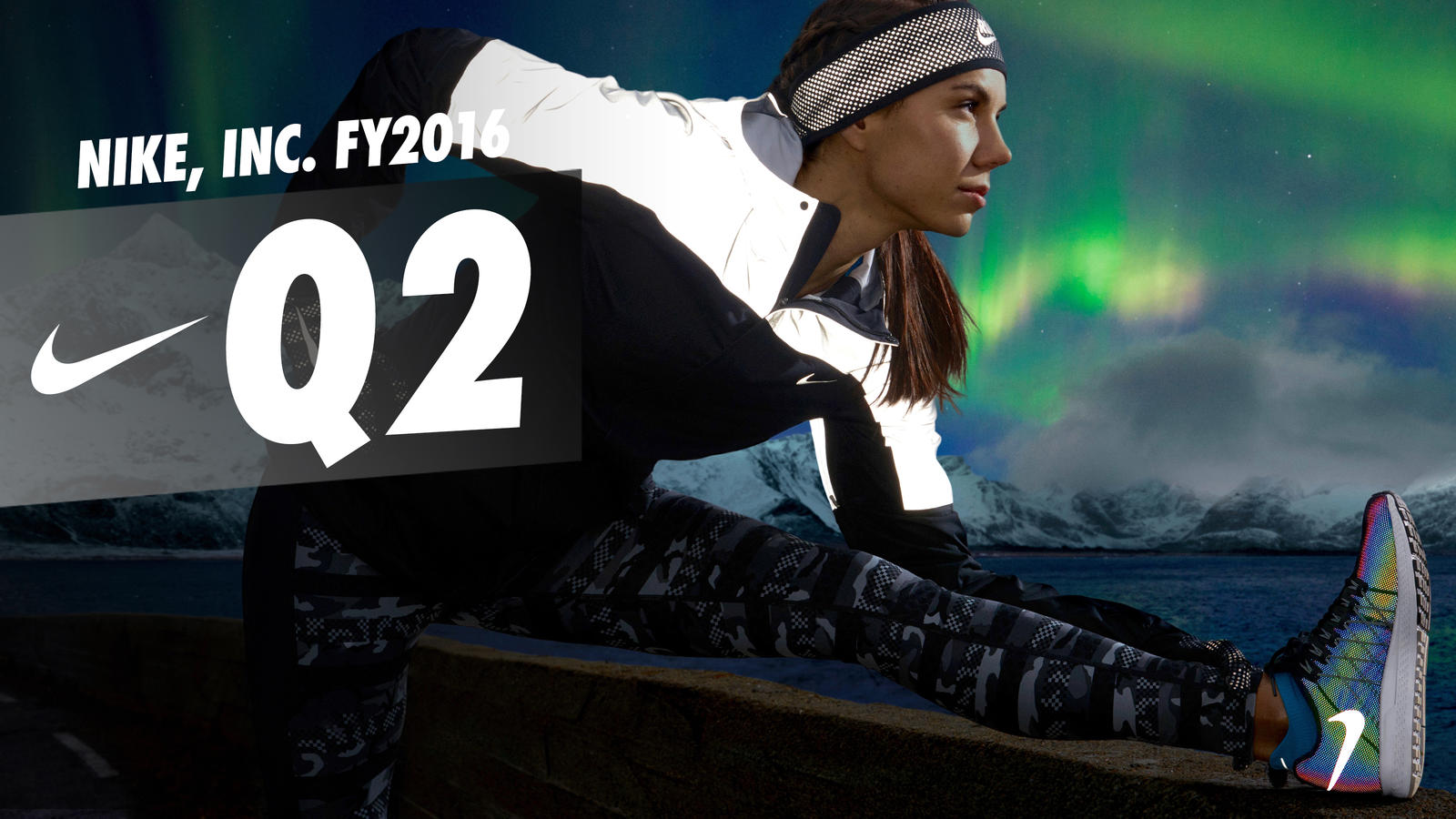 “Our strong Q2 growth and profitability show that NIKE continues to drive real momentum through the Category Offense – by going deep with consumers by sport and serving them completely,” said Mark Parker, President and CEO, NIKE, Inc. “And our powerful global portfolio of businesses, combined with strong financial discipline, continue to drive significant shareholder value. We see tremendous opportunity ahead as we enter an Olympic and European Championships year with a full pipeline of inspiring innovation for athletes everywhere.”*

Revenues for NIKE, Inc. increased 4 percent to $7.7 billion, up 12 percent on a currency neutral basis.

o Revenues for the NIKE Brand were $7.3 billion, up 13 percent on a currency neutral basis, driven by double-digit growth in every geography and most key categories.

o Revenues for Converse were $398 million, down 5 percent on a currency neutral basis, as strong growth in North America was more than offset by a decline in Europe.

Selling and administrative expense increased 5 percent to $2.6 billion. Demand creation expense was $769 million, flat versus the prior year. Operating overhead expense increased 7 percent to $1.8 billion, reflecting continued growth in the Direct To Consumer (DTC) business, as well as investments in operational infrastructure and consumer-focused digital capabilities.

The effective tax rate was 19.1 percent, compared to 25.4 percent for the same period last year, primarily due to adjustments in the prior year to tax expense on intercompany transactions and an increase in earnings from operations outside the U.S. in the current period, which are generally subject to a lower tax rate. These factors were partially offset by the resolution of tax audits across multiple jurisdictions in the prior year period.

Inventories for NIKE, Inc. were $4.6 billion, up 11 percent from November 30, 2014, driven primarily by an 8 percent increase in NIKE Brand wholesale unit inventories. Increases in average product cost per unit, as well as higher inventories associated with growth in DTC, were largely offset by changes in the value of inventories due to foreign currency exchange rates.

Cash and short-term investments were $6.1 billion, $1.4 billion higher than last year mainly as a result of proceeds from the issuance of debt in the second quarter, collateral received from counterparties to foreign currency hedging instruments and growth in net income, which more than offset share repurchases, investments in working capital and higher dividends

During the second quarter, NIKE, Inc. repurchased a total of 5.6 million shares for approximately $652 million as part of the four-year, $8 billion program approved by the Board of Directors in September 2012. As of the end of the second quarter, a total of 92 million shares had been repurchased under this program for $7.2 billion, an average cost of approximately $78.19 per share.

As of the end of the quarter, worldwide futures orders for NIKE Brand athletic footwear and apparel scheduled for delivery from December 2015 through April 2016 were 15 percent higher than orders reported for the same period last year. Excluding currency changes, futures orders would have increased 20 percent.*

On November 19, 2015, the Company announced a two-for-one split of both NIKE Class A and Class B Common Stock. The Company expects its common stock to begin trading at the split-adjusted price on December 24, 2015. As the common stock is not yet trading on a post-split basis, all share and per-share amounts in this earnings release and the accompanying schedules are presented on a pre-split basis.

NIKE, Inc. management will host a conference call beginning at approximately 2:00 p.m. PT on December 22, 2015, to review fiscal second quarter results. The conference call will be broadcast live over the Internet and can be accessed at http://investors.NIKE.com. For those unable to listen to the live broadcast, an archived version will be available at the same location through 9:00 p.m. PT, December 29, 2015.