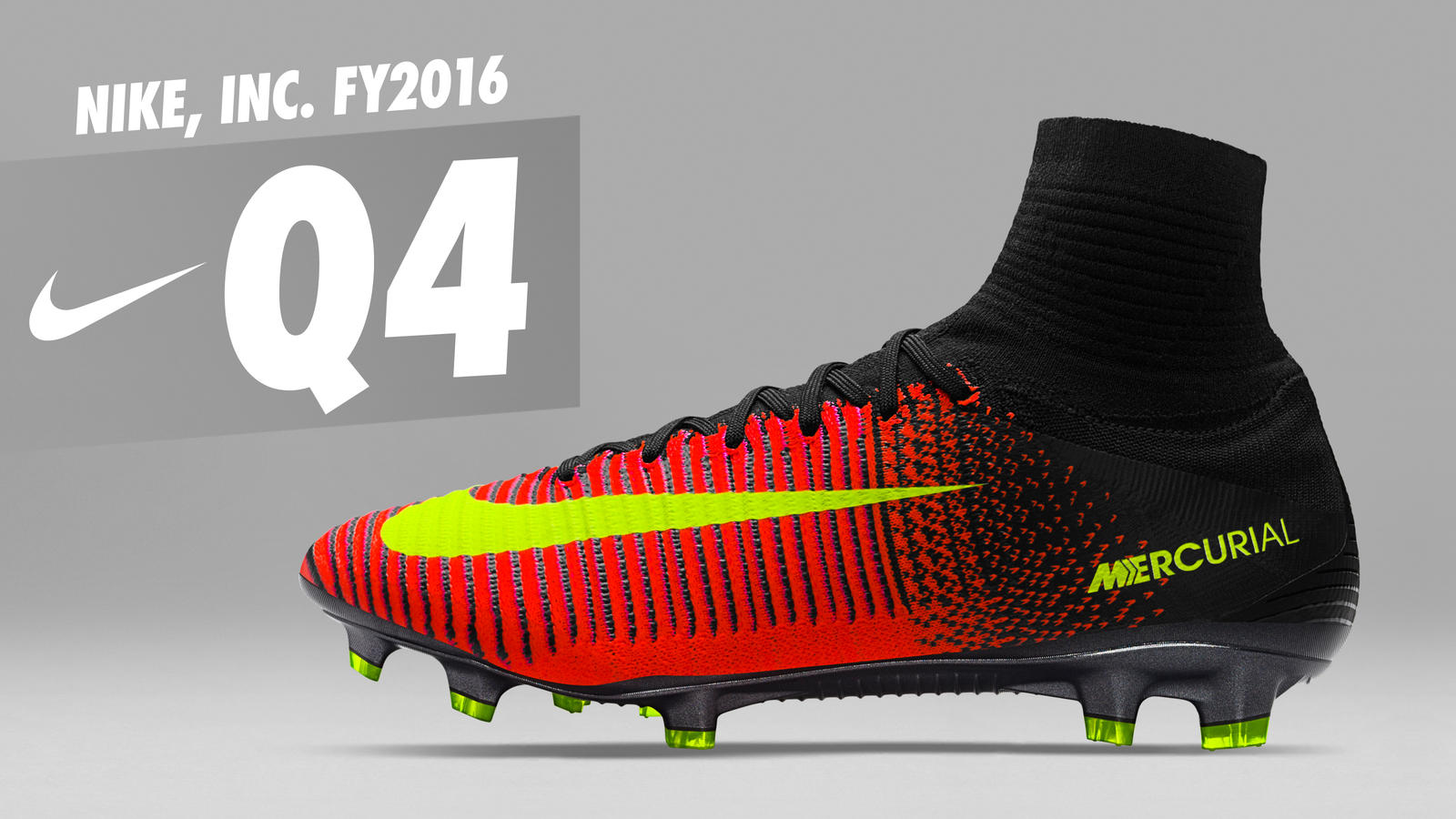 BEAVERTON, Ore., June 28, 2016 – NIKE, Inc. (NYSE:NKE) today reported fiscal 2016 financial results for its fourth quarter and full year ended May 31, 2016. Strong global demand fueled revenue increases across nearly all geographies in fiscal 2016, while robust international revenue drove growth in the fourth quarter.   Diluted earnings per share for the quarter were $0.49 as international momentum and a lower average share count were offset by a higher tax rate; a gross margin decline partially due to the clearance of excess inventory in North America; and higher selling and administrative expense. Fiscal 2016 diluted earnings per share rose 17 percent to $2.16, reflecting revenue growth of 6 percent, gross margin expansion, a lower tax rate and a lower average share count.

"Our consistent growth is fueled by innovation, which is why fiscal 2016 was such a breakthrough year for NIKE in everything we do,” said Mark Parker, President and CEO, NIKE, Inc. “From product to manufacturing to how we serve our consumers – more personally and at scale – we’ve raised the bar of what’s possible. It’s a great time to be in sports, and the NIKE Brand has never been stronger. Fueled by our unrivaled roster of athletes, fiscal 2017’s calendar of sport moments promises to build on our business momentum and inspire consumers.”*

Revenues for NIKE, Inc. rose 6 percent to $8.2 billion, up 9 percent on a currency-neutral basis.

Revenues for the NIKE Brand were $7.7 billion, up 8 percent on a currency-neutral basis driven by double-digit growth in Western Europe, Greater China, Emerging Markets and Japan, including strong growth in Sportswear, Global Football and the Jordan Brand.

Revenues for Converse were $513 million, up 18 percent on a currency-neutral basis, mainly driven by a major system go-live that accelerated orders from the fourth quarter to the third quarter in the prior year.

The effective tax rate was 21.2 percent, compared to 17.8 percent for the same period last year, primarily due to adjustments in the prior year to reduce tax expense recognized in the interim quarters of fiscal 2015 on intercompany transactions.

Net income decreased 2 percent to $846 million as revenue growth was more than offset by lower gross margin, higher selling and administrative expense and a higher tax rate, while diluted earnings per share remained unchanged from the prior year at $0.49 reflecting a 2 percent decline in the weighted average diluted common shares outstanding.

Revenues for NIKE, Inc. rose 6 percent to $32.4 billion, up 12 percent on a currency-neutral basis.

Revenues for the NIKE Brand were $30.5 billion, up 13 percent excluding the impact of changes in foreign currency.

NIKE Brand sales to wholesale customers increased 9 percent on a currency-neutral basis while DTC revenues grew to $7.9 billion, up 25 percent excluding the impact of changes in foreign currency, driven by a 51 percent increase in online sales, the addition of new stores and 10 percent growth in comparable store sales. As of May 31, 2016, the NIKE Brand had 919 DTC stores in operation as compared to 832 a year ago.

On a currency neutral basis, NIKE Brand revenue growth was driven by robust growth in every geography as well as most key categories including Sportswear, Running and the Jordan Brand. Our Men’s, Women’s and Young Athletes’ businesses all grew double-digits.

Revenues for Converse were $2.0 billion, up 2 percent on a currency neutral basis, mainly driven by strong growth in the United States and Asia Pacific, slightly offset by lower sales in Europe.

The effective tax rate was 18.7 percent, compared to 22.2 percent in the prior year, primarily due to an increase in the proportion of earnings from operations outside of the United States, which are generally subject to a lower tax rate.

Inventories for NIKE, Inc. were $4.8 billion, up 12 percent from May 31, 2015, driven by a 6 percent increase in NIKE Brand wholesale unit inventories, increases in average product cost per unit, and growth in our DTC business, partially offset by changes in the value of inventories due to foreign currency exchange rates.

Cash and short-term investments were $5.5 billion, $467 million lower than last year as growth in net income and proceeds from the issuance of debt in the second quarter were more than offset by share repurchases, investments in infrastructure and working capital, higher dividends, and a reduction in collateral received from counterparties to foreign currency hedging instruments.

During the fourth quarter, NIKE, Inc. repurchased a total of 9.0 million shares for approximately $540 million as part of the four-year, $12 billion program approved by the Board of Directors in November 2015. As of the end of fiscal 2016, a total of 20.1 million shares had been repurchased under this program for approximately $1.2 billion, at an average cost of $59.21 per share.

In fiscal 2016, NIKE, Inc. repurchased a total of 55.4 million shares for approximately $3.2 billion, at an average cost of $58.44, under the new $12 billion program currently in use as well as the previous $8 billion program approved by the Board of Directors in September 2012.

As of May 31, 2016, worldwide futures orders for NIKE Brand athletic footwear and apparel scheduled for delivery from June through November 2016 totaled $14.9 billion, 8 percent higher than orders reported for the same period last year, and 11 percent higher on a currency neutral basis.*

NIKE, Inc. management will host a conference call beginning at approximately 2:00 p.m. PT on June 28, 2016, to review fiscal fourth quarter and full year results. The conference call will be broadcast live over the Internet and can be accessed at http://investors.nike.com. For those unable to listen to the live broadcast, an archived version will be available at the same location through 9:00 p.m. PT, July 5, 2016.