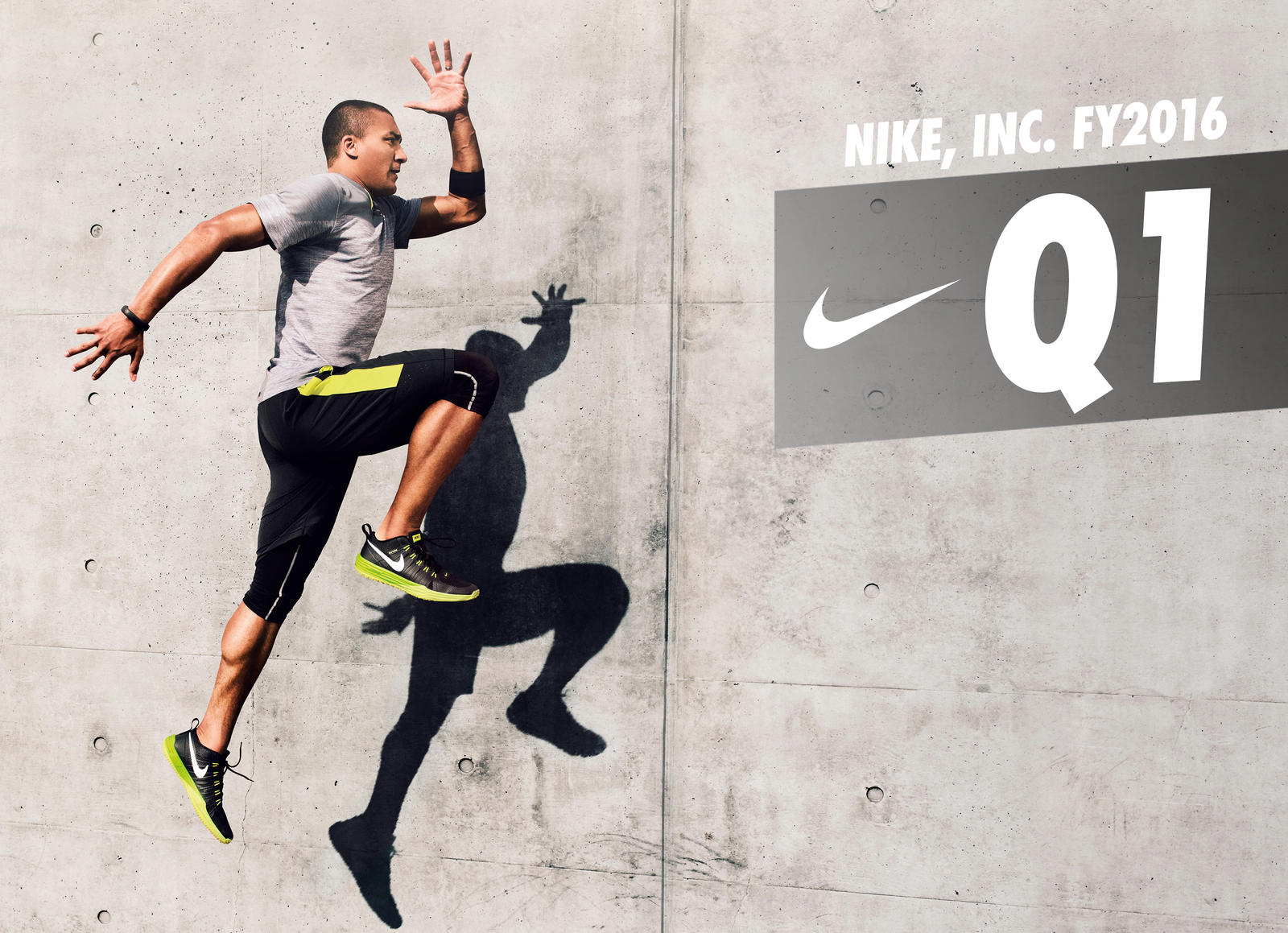 “Fiscal 2016 is off to a great start,” said Mark Parker, President and CEO of NIKE, Inc. “Our relentless pace of growth is driven by our proven strategy of putting the consumer first, obsessing innovation in everything we do and leveraging our powerful portfolio. We’re well-positioned to continue to deliver long-term growth that is both sustainable and profitable.”

Revenues for NIKE, Inc. increased 5 percent to $8.4 billion, up 14 percent on a currency-neutral basis.

• Revenues for the NIKE Brand were $7.9 billion, up 15 percent on a currency-neutral basis driven by growth in every geography and nearly every key category.

• Revenues for Converse were $555 million, up 3 percent on a currency-neutral basis, mainly driven by strong growth in the United States, partially offset by a decline in the United Kingdom.

Selling and administrative expense increased 4 percent to $2.6 billion. Demand creation expense was $832 million, down 7 percent, reflecting favorable comparisons against higher investment in support of the World Cup in the first quarter of fiscal 2015. Operating overhead expense increased 10 percent to $1.7 billion, reflecting continued growth in the DTC business and targeted investments in infrastructure and consumer-focused digital capabilities.

The effective tax rate was 18.4 percent, compared to 21.7 percent for the same period last year, primarily due to an increase in the proportion of earnings from operations outside of the United States, which are generally subject to a lower tax rate, as well as certain non-recurring items recognized in the quarter.

Inventories for NIKE, Inc. were $4.4 billion, up 10 percent from August 31, 2014, driven primarily by an 8 percent increase in NIKE Brand wholesale unit inventories. Increases in average product cost per unit, as well as higher inventories associated with growth in DTC, were largely offset by changes in foreign currency rates.

Cash and short-term investments were $5.4 billion, $829 million higher than last year primarily as a result of growth in net income and collateral received from counterparties as a result of hedging activities more than offsetting share repurchases and higher dividends.

During the first quarter, NIKE, Inc. repurchased a total of 5.5 million shares for approximately $588 million as part of the four-year, $8.0 billion program approved by the Board of Directors in September 2012. As of the end of the first quarter, a total of 86.4 million shares had been repurchased under this program for approximately $6.5 billion, at an average cost of $75.70 per share.

As of the end of the quarter, worldwide futures orders for NIKE Brand athletic footwear and apparel scheduled for delivery from September 2015 through January 2016 were 9 percent higher than orders reported for the same period last year, and 17 percent higher on a currency-neutral basis.*

NIKE, Inc. management will host a conference call beginning at approximately 2:00 p.m. PT on September 24, 2015, to review fiscal first quarter results. The conference call will be broadcast live over the Internet and can be accessed at http://investors.nike.com. For those unable to listen to the live broadcast, an archived version will be available at the same location through 9:00 p.m. PT, October 1, 2015.

NIKE, Inc., based near Beaverton, Oregon, is the world's leading designer, marketer and distributor of authentic athletic footwear, apparel, equipment and accessories for a wide variety of sports and fitness activities. Wholly-owned NIKE, Inc. subsidiary brands include Converse, which designs, distributes and licenses casual sneakers, apparel and accessories; and Hurley, which designs and distributes a line of action sports and youth lifestyle apparel and accessories. For more information, NIKE, Inc.’s earnings releases and other financial information are available on the Internet at http://investors.nike.com and individuals can follow @Nike.