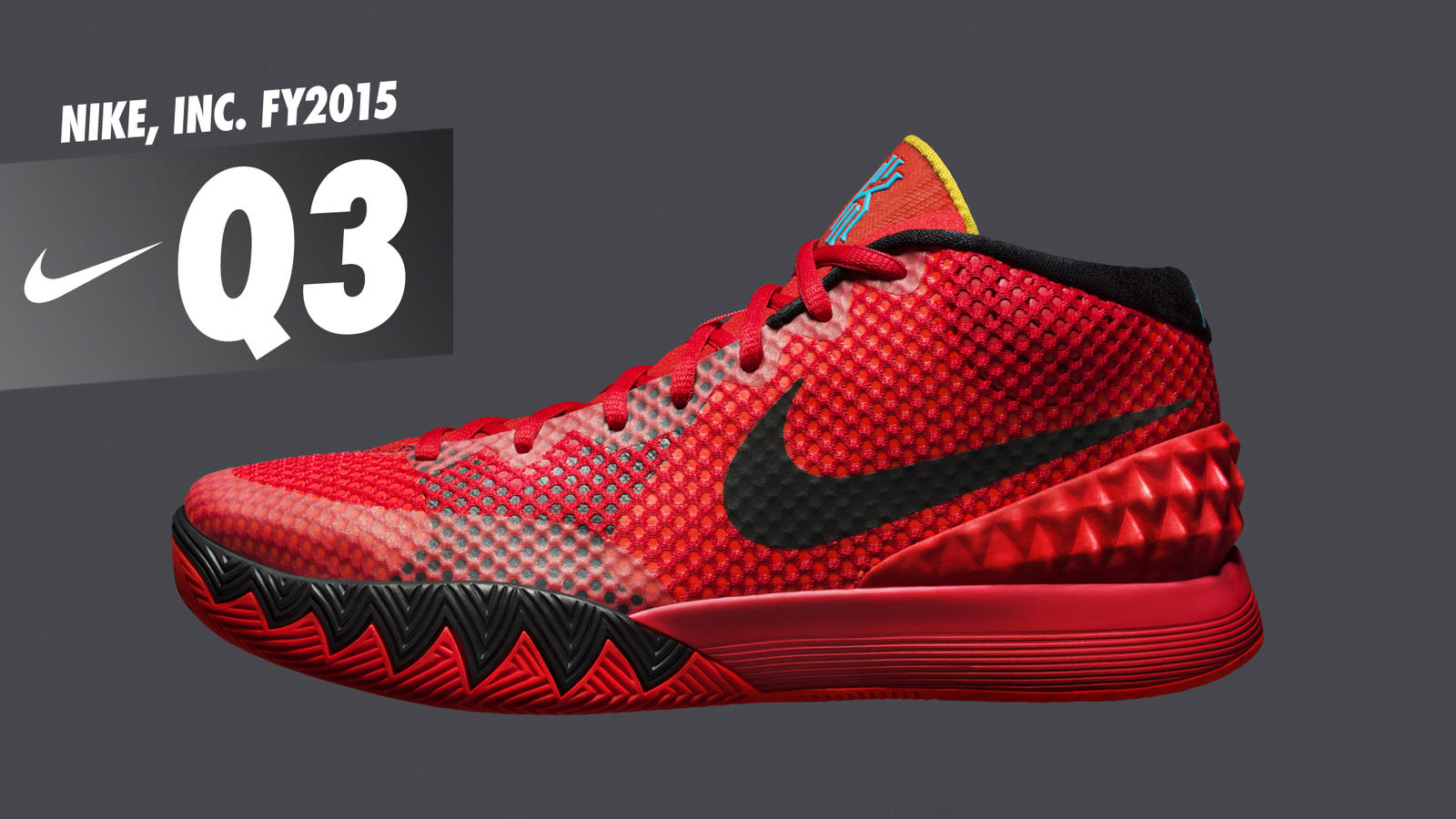 LISTEN TO THE LIVE WEBCAST

NIKE, Inc. (NYSE:NKE) today reported financial results for its fiscal 2015 third quarter ended February 28, 2015. Diluted earnings per share for the quarter were up 19 percent due to higher revenues as a result of continued strong demand for NIKE, Inc. brands and gross margin expansion, partially offset by higher SG&A investments and a higher effective tax rate.

“Our strong third quarter results show that our growth strategies are working, even under challenging macroeconomic conditions,” said Mark Parker, President and CEO, NIKE, Inc. “Nike has the ability to deliver consistent shareholder value due to the strength of our brand, our relentless commitment to innovation and our powerful portfolio that allows us to invest in the opportunities with the highest potential for growth as well as manage risk.”*

Revenues for NIKE, Inc. rose 7 percent to $7.5 billion, up 13 percent on a currency neutral basis.

Revenues for the Nike Brand were $6.9 billion, up 11 percent on a currency neutral basis driven by growth in every geography and in most key categories.

Revenues for Converse were $538 million, up 33 percent on a currency neutral basis, mainly driven by continued growth and timing of shipments in North America, the transition to direct distribution in AGS (Austria, Germany, Switzerland) and growth in the Direct to Consumer (DTC) business.

Selling and administrative expense increased 10 percent to $2.4 billion. Demand creation expense was $731 million, flat to the prior year as increased investments in digital brand marketing and sports marketing were offset by lower advertising expense due to product launch timing. Operating overhead expense increased 15 percent to $1.6 billion, reflecting growth in the DTC business and targeted investments in infrastructure and consumer-focused digital capabilities.

Other income, net was $5 million, comprised primarily of net foreign exchange gains. For the quarter, the Company estimates the year-over-year change in foreign currency related gains and losses included in other income, net, combined with the impact of changes in exchange rates on the translation of foreign currency-denominated profits, decreased pretax income by approximately $20 million.

The effective tax rate was 24.4 percent, compared to 22.5 percent for the same period last year, primarily due to the impact of tax expense on intercompany transactions, partially offset by the retroactive reinstatement of the U.S. research and development tax credit.

Inventories for NIKE, Inc. were $4.2 billion, up 12 percent from February 28, 2014, driven by a 12 percent increase in Nike Brand wholesale inventories as well as higher inventories associated with growth in DTC. Nike Brand wholesale inventories were higher due to a 17 percent increase in units, while changes in the average product cost per unit, combined with the impact of changes in foreign currency exchange rates, decreased growth by approximately 5 percentage points.

Cash and short-term investments were $5.4 billion, $332 million higher than last year as growth in net income and collateral received from counterparties as a result of hedging activities more than offset share repurchases, higher dividends and investments in working capital.

During the third quarter, NIKE, Inc. repurchased a total of 6.5 million shares for approximately $612 million as part of the four-year, $8 billion program approved by the Board of Directors in September 2012. As of the end of the third quarter, a total of 74.1 million shares had been repurchased under this program for approximately $5.3 billion, an average cost of $71.13 per share.

As of the end of the quarter, worldwide futures orders for Nike Brand athletic footwear and apparel scheduled for delivery from March 2015 through July 2015 were 2 percent higher than orders reported for the same period last year. Excluding currency changes, reported orders would have increased 11 percent.

Nike management will host a conference call beginning at approximately 2 p.m. PT on March 19, 2015, to review third quarter results. The conference call will be broadcast live over the Internet and can be accessed at Investors.Nike.com. For those unable to listen to the live broadcast, an archived version will be available at the same location through 9 p.m. PT, March 26, 2015.

* The marked paragraphs contain forward-looking statements that involve risks and uncertainties that could cause actual results to differ materially. These risks and uncertainties are detailed from time to time in reports filed by NIKE with the S.E.C., including Forms 8-K, 10-Q, and 10-K. Some forward-looking statements in this release concern changes in futures orders that are not necessarily indicative of changes in total revenues for subsequent periods due to the mix of futures and “at once” orders, exchange rate fluctuations, order cancellations, discounts and returns, which may vary significantly from quarter to quarter, and because a portion of the business does not report futures orders.