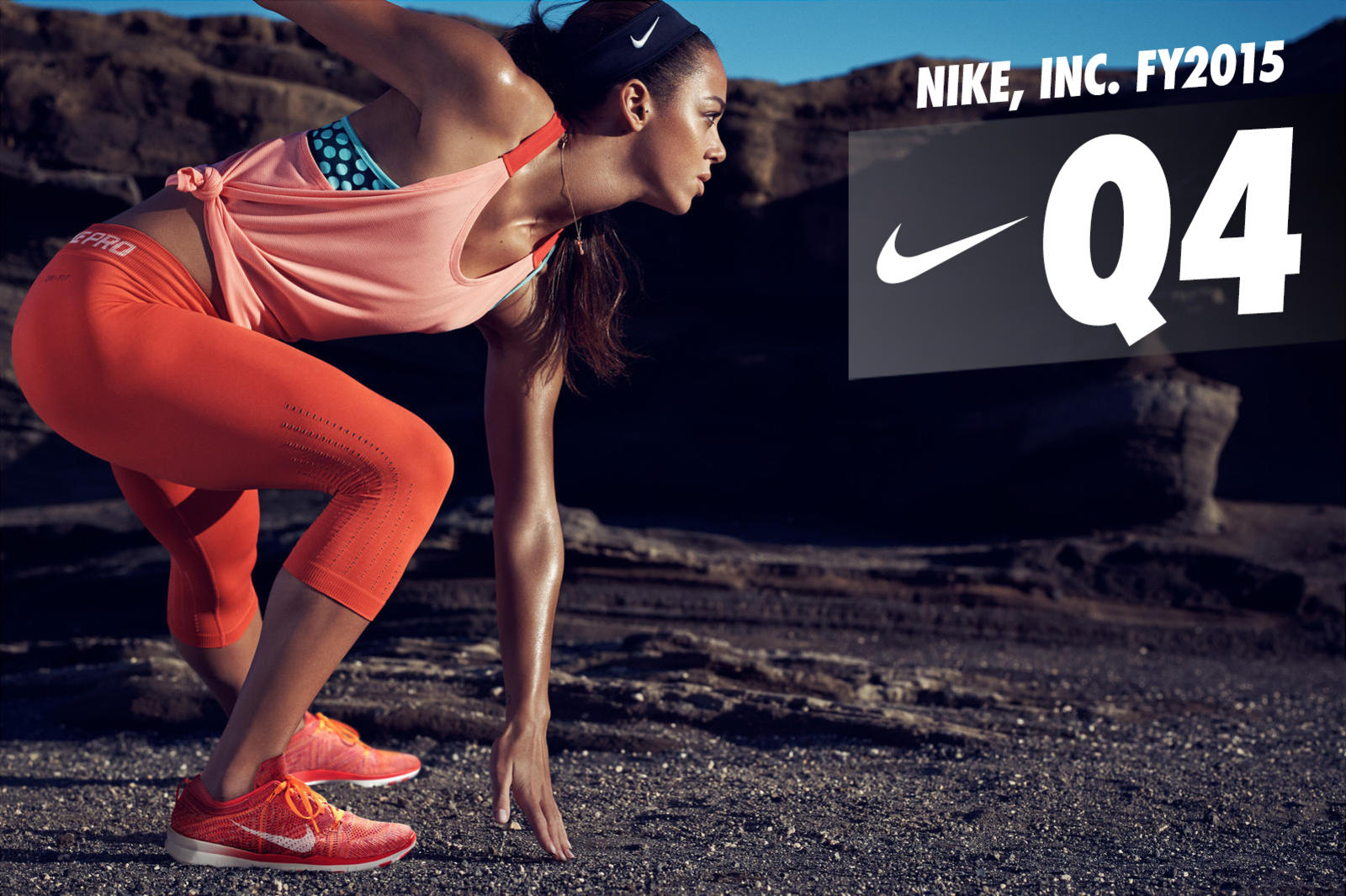 "Fiscal 2015 was an outstanding year for NIKE,” said Mark Parker, President and CEO, NIKE, Inc. “Our consistent growth is fueled by our connection to the consumer and our ability to deliver innovation at an unprecedented pace and scale. At no time in our history has the growth potential been greater for NIKE.”*

• Revenues for NIKE, Inc. rose 5 percent to $7.8 billion, up 13 percent on a currency-neutral basis.

• Revenues for the NIKE Brand were $7.4 billion, up 13 percent on a currency-neutral basis driven by growth in nearly every geography and key category except Emerging Markets and Global Football.

• Revenues for Converse were $435 million, up 14 percent on a currency-neutral basis, mainly driven by market transitions to direct distribution in AGS (Austria, Germany and Switzerland) and strong performance in the United States.

• Selling and administrative expense increased 6 percent to $2.6 billion. Demand creation expense was $819 million, down 7 percent, reflecting higher investment in support of the World Cup in the fourth quarter of fiscal 2014. Operating overhead expense increased 13 percent to $1.8 billion, reflecting continued growth in the DTC business and targeted investments in infrastructure and consumer-focused digital capabilities.

• The effective tax rate was 17.8 percent, compared to 23.5 percent for the same period last year, primarily due to adjustments to reduce tax expense recognized in interim quarters of fiscal 2015 on intercompany transactions.

• Revenues for the NIKE Brand were $28.7 billion, up 14 percent excluding the impact of changes in foreign currency.

• NIKE Brand sales to wholesale customers increased 10 percent on a currency-neutral basis while DTC revenues grew to $6.6 billion, up 29 percent excluding the impact of changes in foreign currency, driven by 16 percent growth in comparable store sales, a 59 percent increase in online sales and the addition of new stores. As of May 31, 2015, the NIKE Brand had 832 DTC stores in operation as compared to 768 a year ago.

• On a currency neutral basis, NIKE Brand revenue growth was driven by growth in every geography, every key category except Global Football and across the Women’s, Men’s and Young Athletes’ businesses.

• Revenues for Converse were $2.0 billion, up 21 percent on a currency neutral basis, mainly driven by market transitions to direct distribution in AGS and strong performance in the United States.

• Selling and administrative expense grew 13 percent to $9.9 billion. Demand creation expense was $3.2 billion, up 6 percent, due to an increase in investments in support of key events and product launches, as well as investments in DTC and sports marketing. Operating overhead expense increased 16 percent to $6.7 billion due to the expanding DTC business, higher costs for operational infrastructure and investments in consumer-facing digital capabilities.

• The effective tax rate was 22.2 percent, compared to 24.0 percent for the same period last year, primarily due to the favorable resolution of tax audits across multiple jurisdictions.

• Inventories for NIKE, Inc. were $4.3 billion, up 10 percent from May 31, 2014, driven primarily by a 13 percent increase in NIKE Brand wholesale unit inventories. Changes in the average product cost per unit were more than offset by changes in foreign currency exchange rates, which together decreased NIKE, Inc. inventory growth by approximately 3 percentage points.

• Cash and short-term investments were $5.9 billion, $782 million higher than last year as growth in net income and collateral received from counterparties as a result of hedging activities more than offset share repurchases, higher dividends and investments in working capital.

During the fourth quarter, NIKE, Inc. repurchased a total of 6.8 million shares for approximately $678 million as part of the four-year, $8.0 billion program approved by the Board of Directors in September 2012. As of the end of fiscal 2015, a total of 80.9 million shares had been repurchased under this program for approximately $6.0 billion, at an average cost of $73.55 per share.

As of the end of the quarter, worldwide futures orders for NIKE Brand athletic footwear and apparel scheduled for delivery from June through November 2015 totaled $13.5 billion, 2 percent higher than orders reported for the same period last year, and 13 percent higher on a currency neutral basis.*

NIKE, Inc. management will host a conference call beginning at approximately 2:00 p.m. PT on June 25, 2015, to review fiscal fourth quarter and full year results. The conference call will be broadcast live over the Internet and can be accessed at http://investors.nike.com. For those unable to listen to the live broadcast, an archived version will be available at the same location through 9:00 p.m. PT, July 2, 2015.

* The marked paragraphs contain forward-looking statements that involve risks and uncertainties that could cause actual results to differ materially. These risks and uncertainties are detailed from time to time in reports filed by NIKE with the S.E.C., including Forms 8-K, 10-Q, and 10-K. Some forward-looking statements in this release concern changes in futures orders that are not necessarily indicative of changes in total revenues for subsequent periods due to the mix of futures and “at once” orders, exchange rate fluctuations, order cancellations, discounts and returns, which may vary significantly from quarter to quarter, and because a portion of the business does not report futures orders.