It was almost a decade ago when Mike Trout sat in a room at Nike’s world headquarters and fielded questions from Nike developers about creating his first signature cleat. The experience was a lot to take in for Trout, and he approached it with the deferential humility that the superstar is known for — how it was an honor to have a signature shoe in the first place, how he didn’t want to overstep boundaries in his feedback. But there was more to the humble superstar’s reserved approach than bashfulness, setting up a key motivation for his newest cleat, the Nike Force Zoom Trout 6.

“I held in my feedback for those first meetings, but it was more because I didn’t know Nike could make the smallest changes based on what I wanted,” says Trout. "If there was some seam on the cleat I didn’t like, I could change it, or if there was a feature from a past cleat I wanted to bring in, I could do it. Looking back, I should’ve been more vocal from day one.” 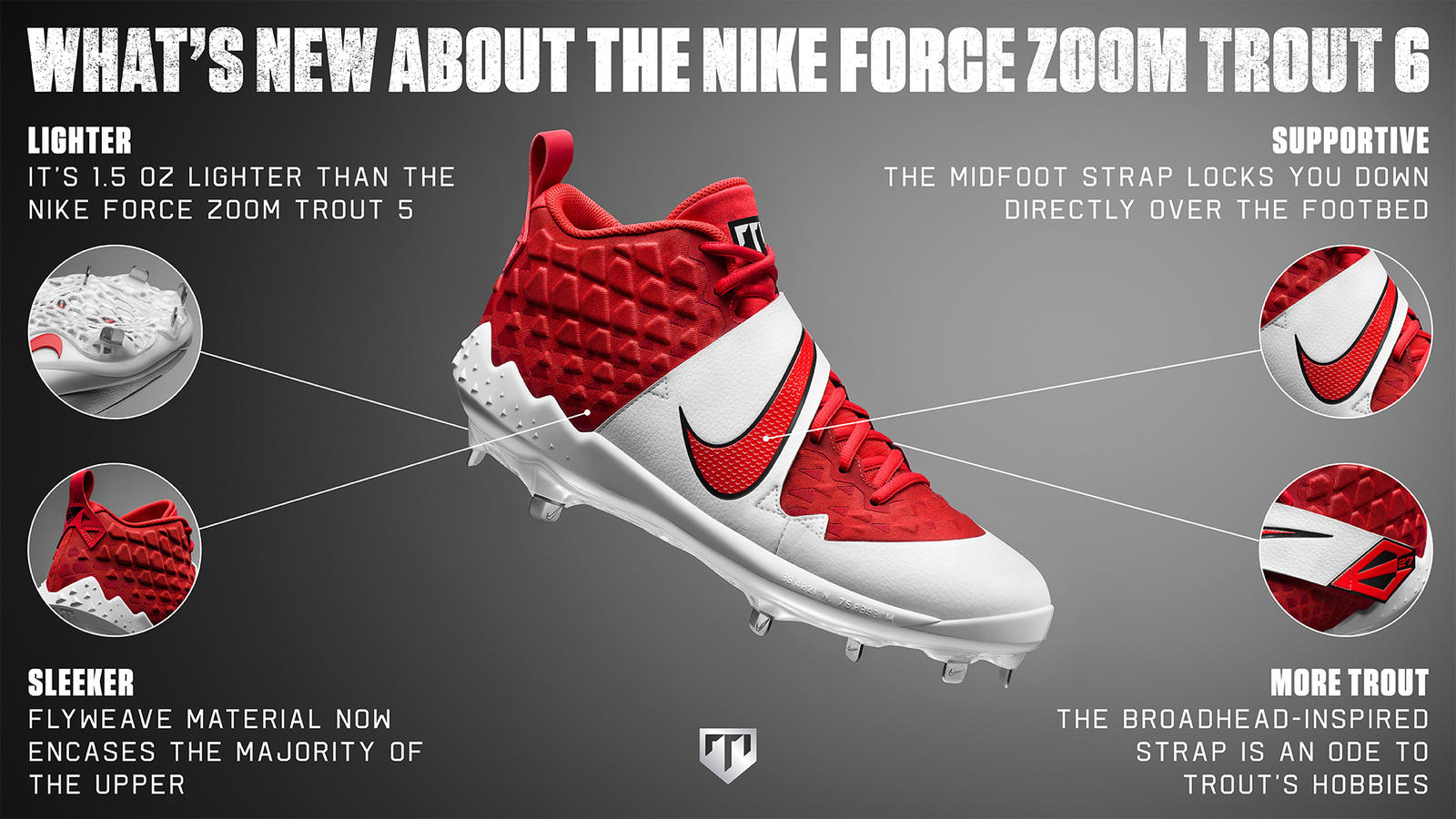 The cleat has two updates from the Nike Force Zoom Trout 5 that draw from some of Trout’s favorite silhouettes as a kid. One is a midfoot strap reminiscent of early Nike Baseball Huarache cleats. The other is a pronounced toe cap drawn from the Nike Air Max Diamond Elite. (It’s the second time that the feature has appeared on a Trout cleat — the Nike Force Zoom Trout 4 had a similar toe cap that was combined with a computationally-designed plate.) Trout personally asked for both the strap and the toe cap to be added into the Trout 6.

For Trout, those connections to cleats from his past relay a special relationship to his own gear as a kid, but also a broader awareness of his young fan base. His benevolence toward kids is well known, giving gloves, jerseys, bats — even home runs to fans. He appreciates the almost magical power that gear has on a young player, the same power it had on him. He wanted to design a cleat any kid would be inspired to step into, but it also had to be a tool for your game, not the mouthpiece that yells for you.

“Kids have a unique relationship to their gear,” says Trout. “Obviously, you think about young kids who are going to wear this cleat and make them look good, and more importantly, make them feel good. Nike allows me to change what I want, and in doing so, I can create a cleat that young players are hopefully excited to wear.”

Which is why the man who might go down as baseball’s greatest-ever isn’t biting his lip anymore in designing his signature cleat. He has a few more things to say.

The Nike Force Zoom Trout 6 releases July 5 on nike.com and at select retailers.