An unlabeled sweatshirt is…just a sweatshirt. An unbranded pair of jeans is anonymous denim. But unlike other articles of clothing, a jersey can never be completely stripped of meaning. A name, number and crest can be removed, and still, the jersey’s essence is rich with history. For England fans, the pared-down version of their jersey is not just a white shirt – it’s a blank canvas on which the wearer projects their vision of the England football experience, bridging a fresh connection with a new era of national fans.

That essentialist idea served as the foundation for Nike Football’s recently launched White Shirt Project, where a group of 11 British artists, athletes and cultural leaders took the white jersey and designed it according to their unique relationship with their homeland. See the submissions below. 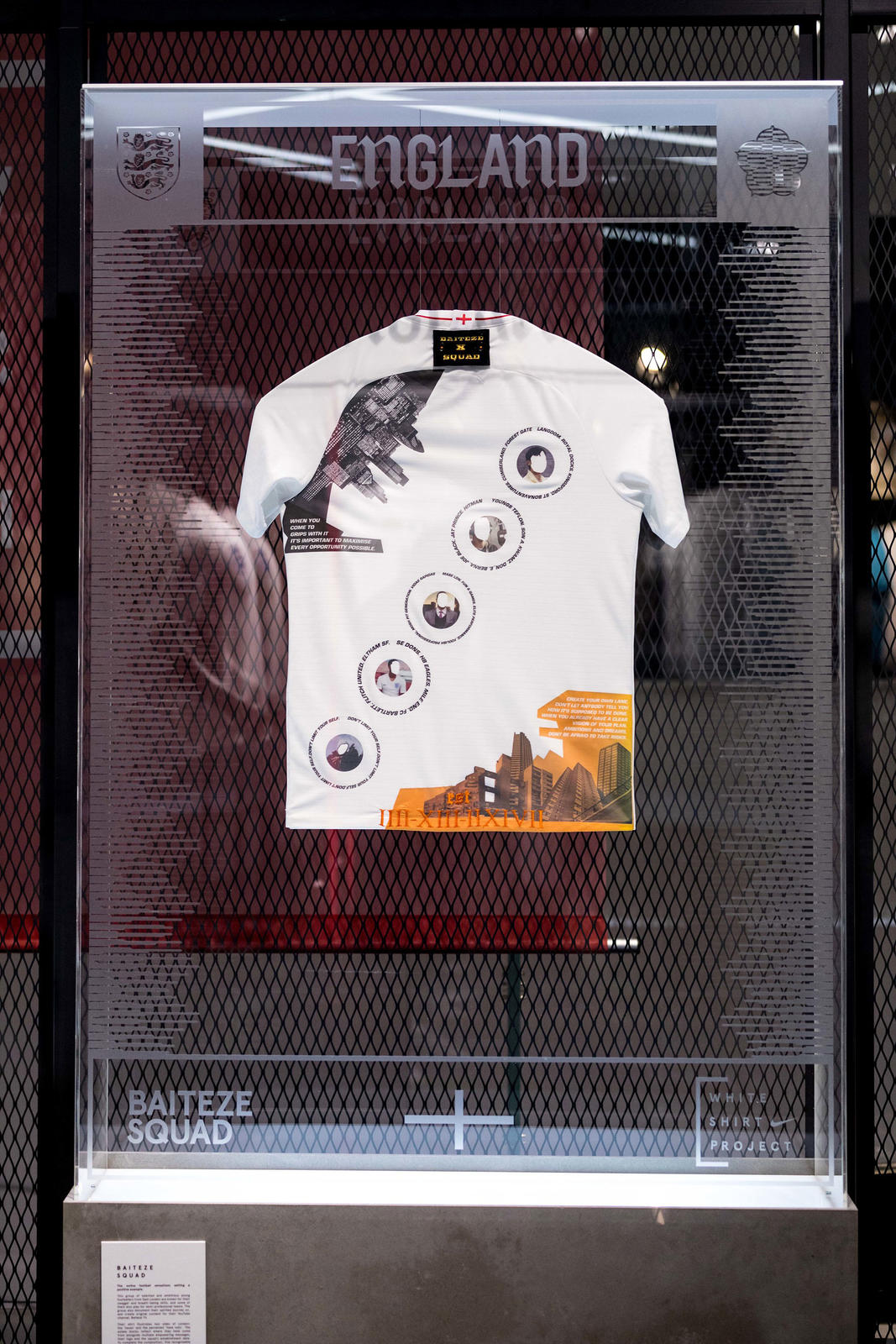 The East London team rose to internet popularity as their breathtaking footwork and technical virtuosity went viral on their social media channels. Their jersey illustrates the “haves” and the perceived “have nots” of London, the figures of which are arranged to represent the many routes Londoners take to succeed in the city. 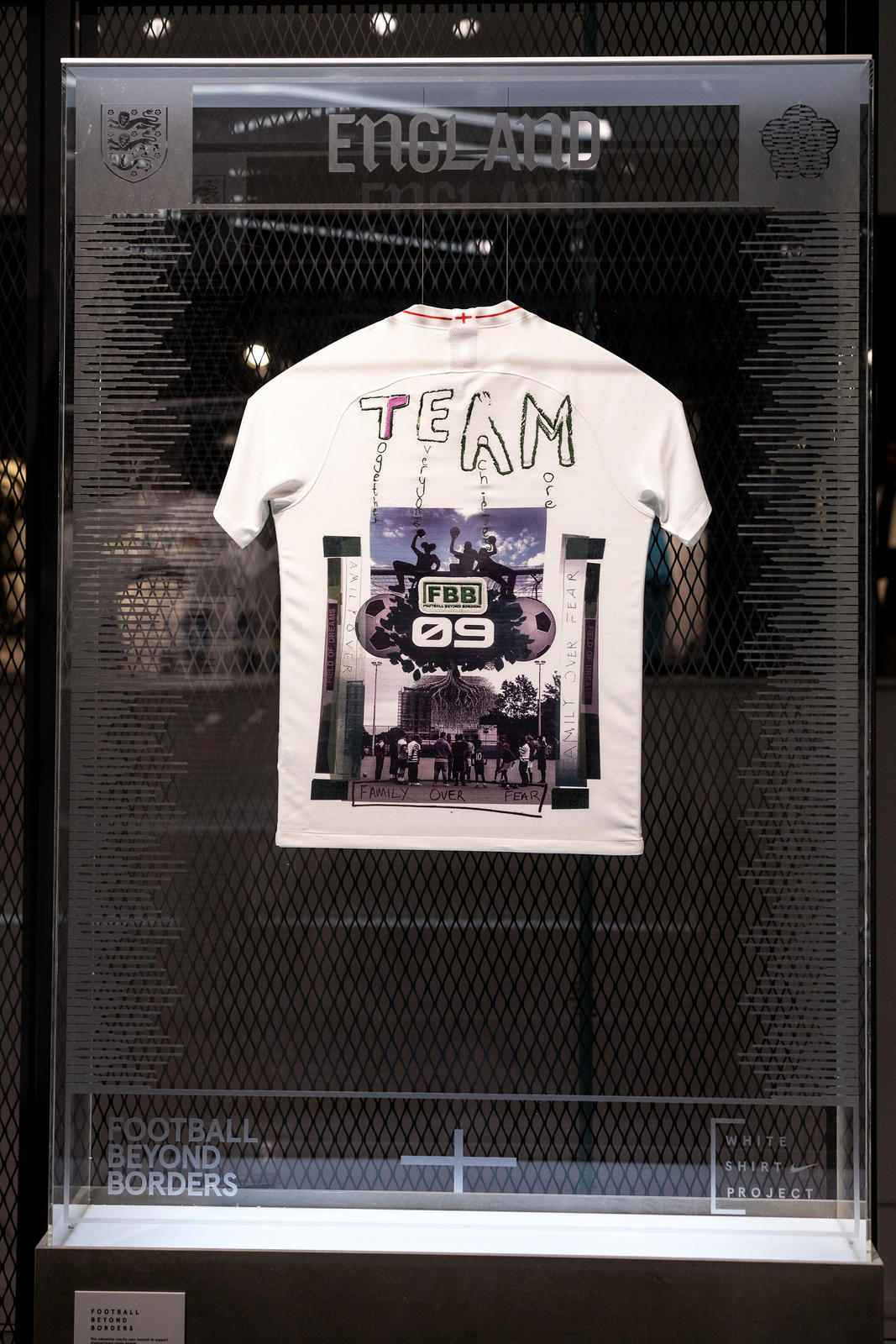 The inventive philanthropic group works alongside 400 young people weekly to provide free services such as academic mentorship and literacy training through volunteers and their donations. The charity’s “Field of Dreams” jersey highlights the power of football to transform lives and enact global progress. 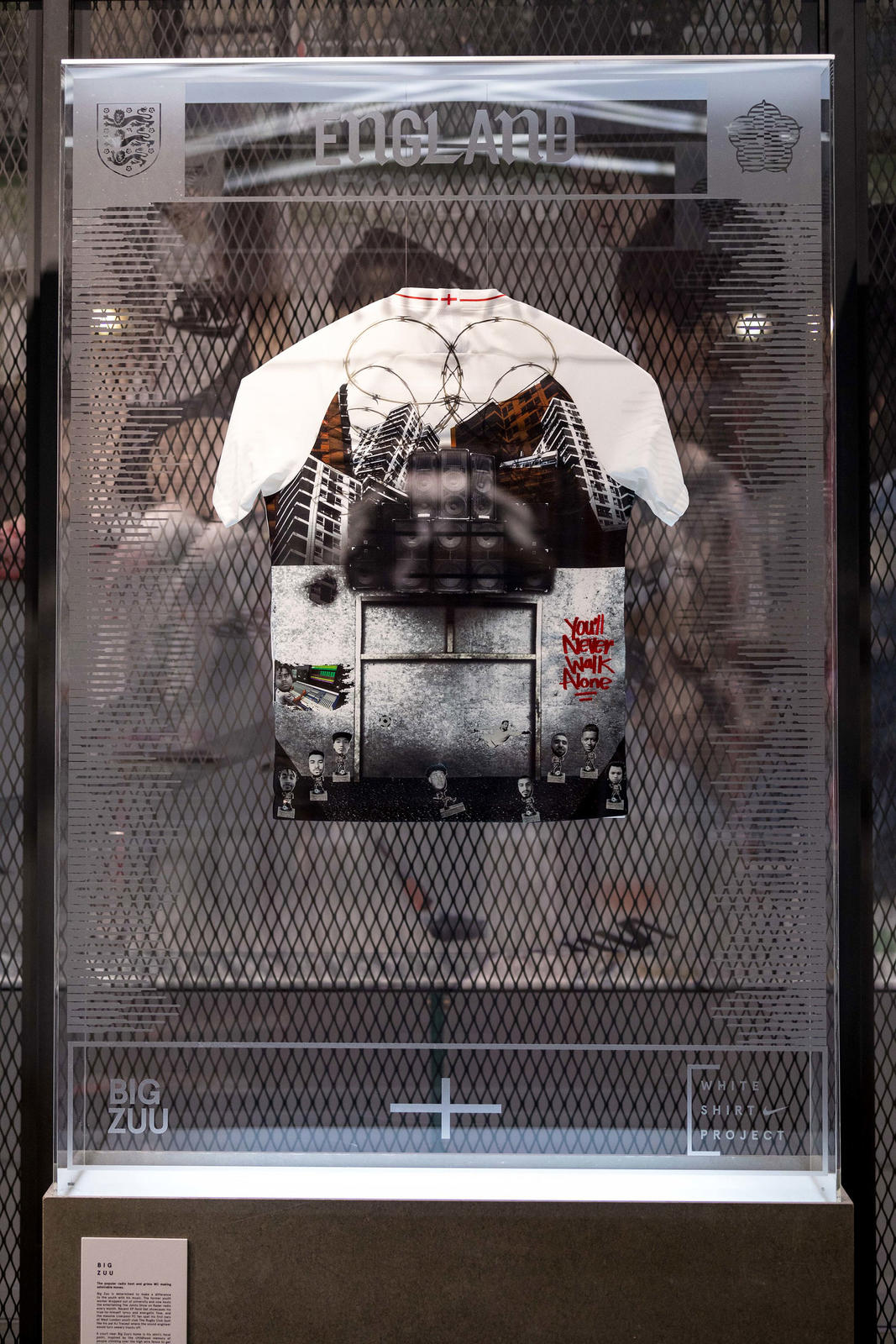 A former youth worker, the larger-than-life Liverpool FC fan dropped out of university to pursue his music career with a commitment to inspire the community’s youth through his lyrics. The focus of his jersey is a basketball court near his home, brought by the memory of players climbing over the high-wire fence to retrieve their ball. The Liverpool FC motto, “You’ll never walk alone,” is displayed on the nearby wall. 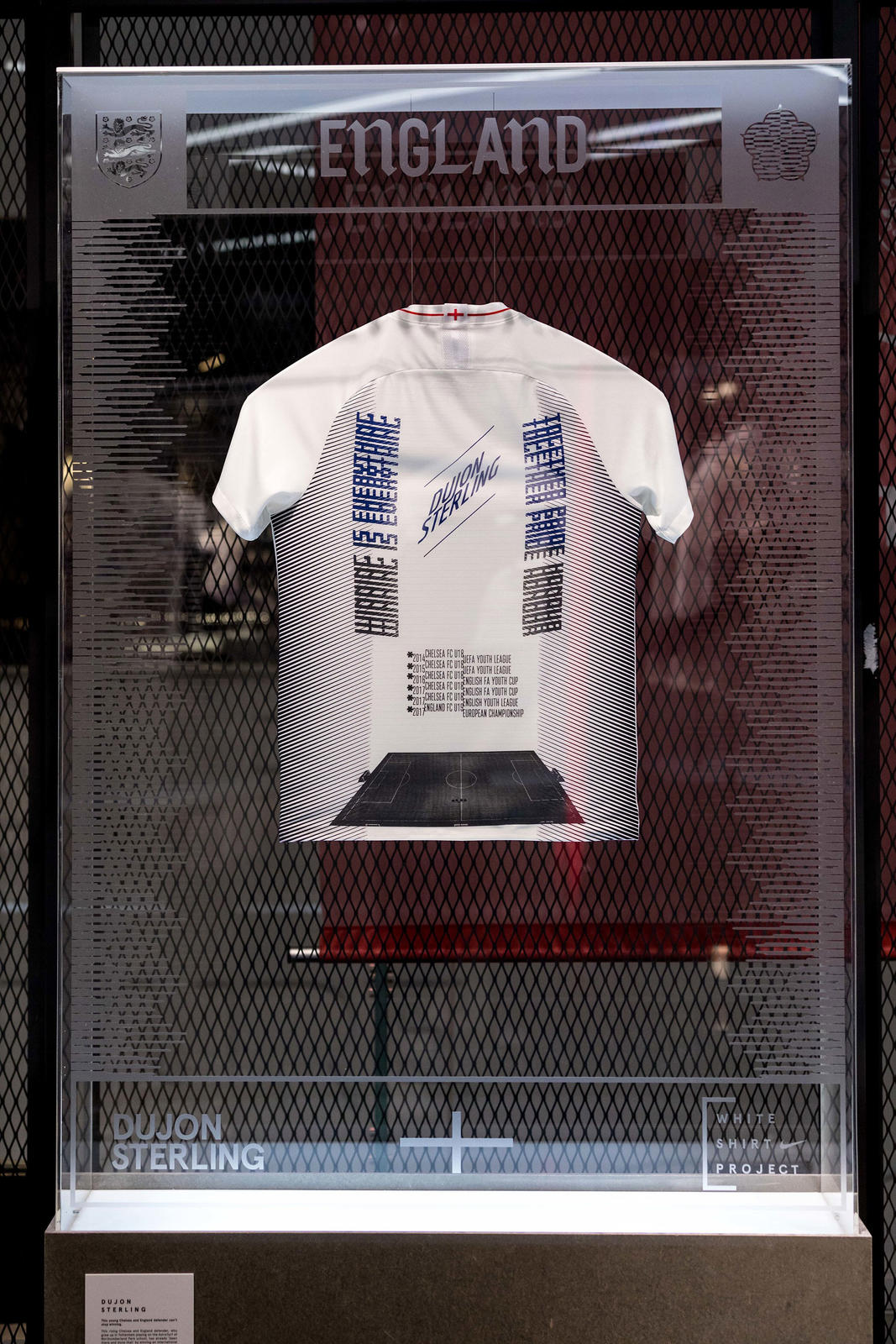 The lauded 18-year-old found his way while growing up in Tottenham and playing on the turf grounds of Northumberland Park School. His jersey is split into two halves: The Chelsea side prints the phrase, “Winning is everything,” while the England side defines his national sonship through the words “Together, pride, humour.” 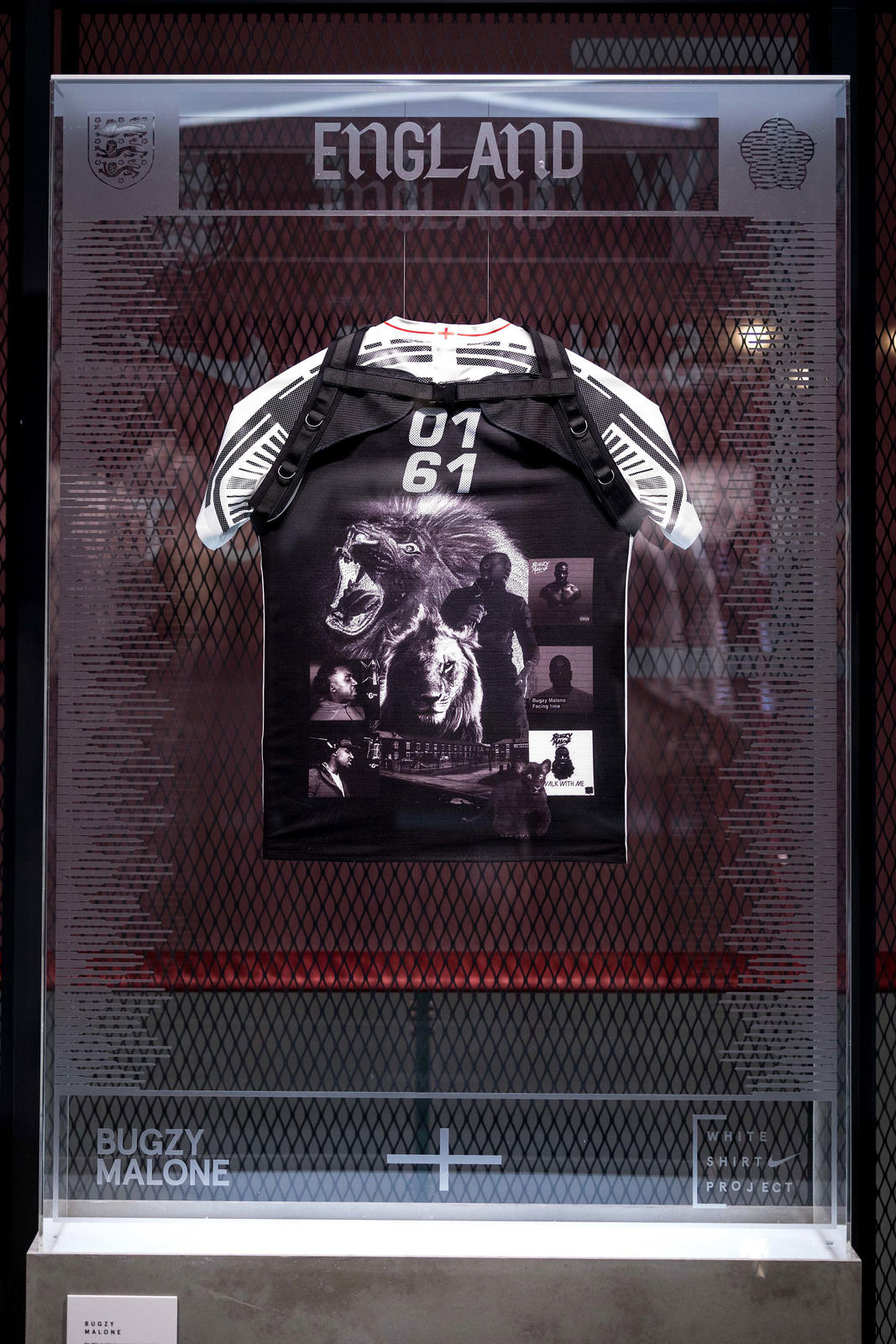 Born in Manchester, Malone uses his hometown’s dialing code – 0161 – as a recurring reframe in his music and clothing line. The numbers also appear on the back of Malone’s jersey, along with the covers of his first three EPs. 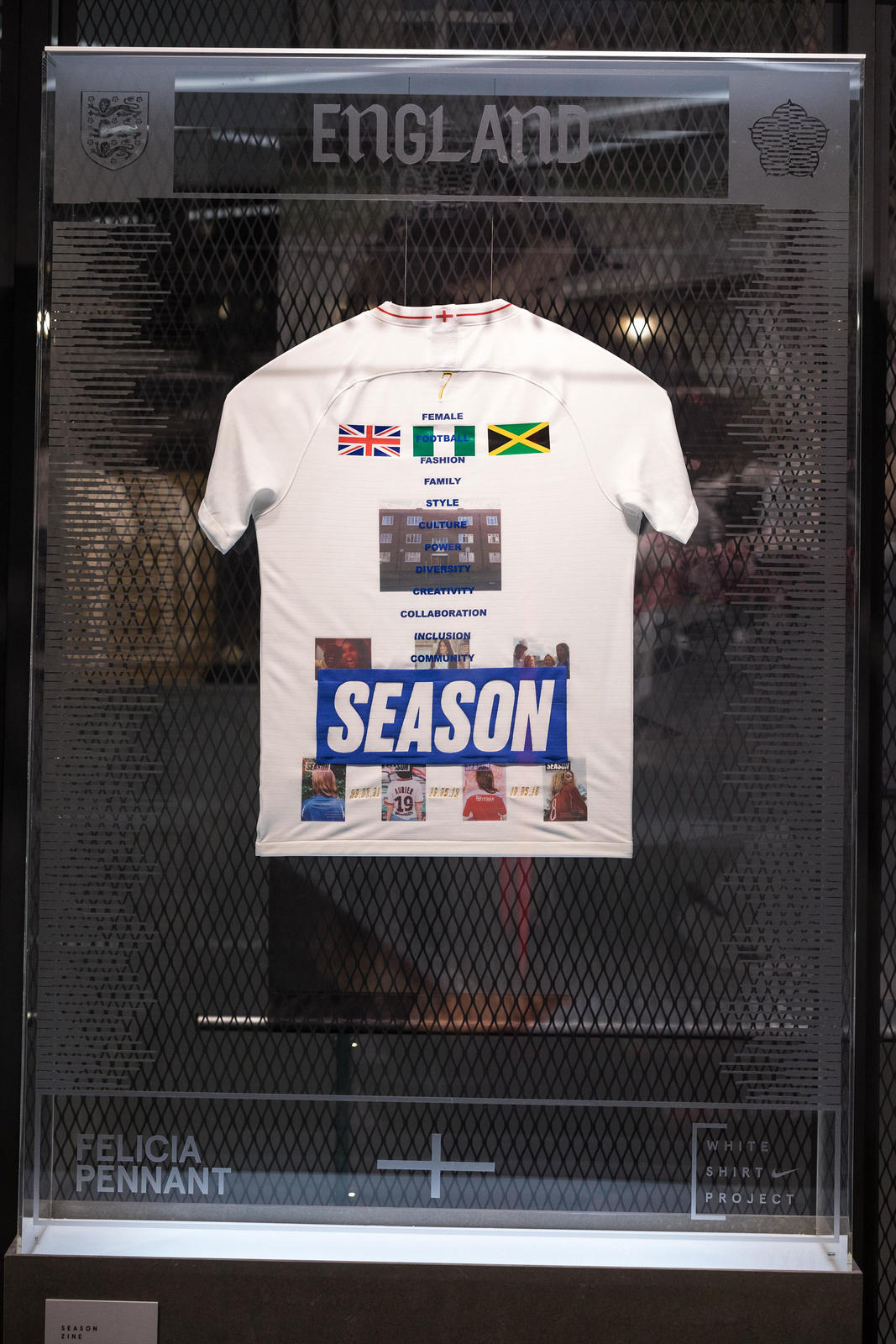 Compelled to challenge the male-dominated status quo of football culture, Pennant created SEASON Zine in 2016 as a creative joining of her love of sport and fashion and her belief in female empowerment. Pennant’s jersey is structurally arranged in a 3-1-3-4 football formation, overlaid with a cut-out SEASON logo. 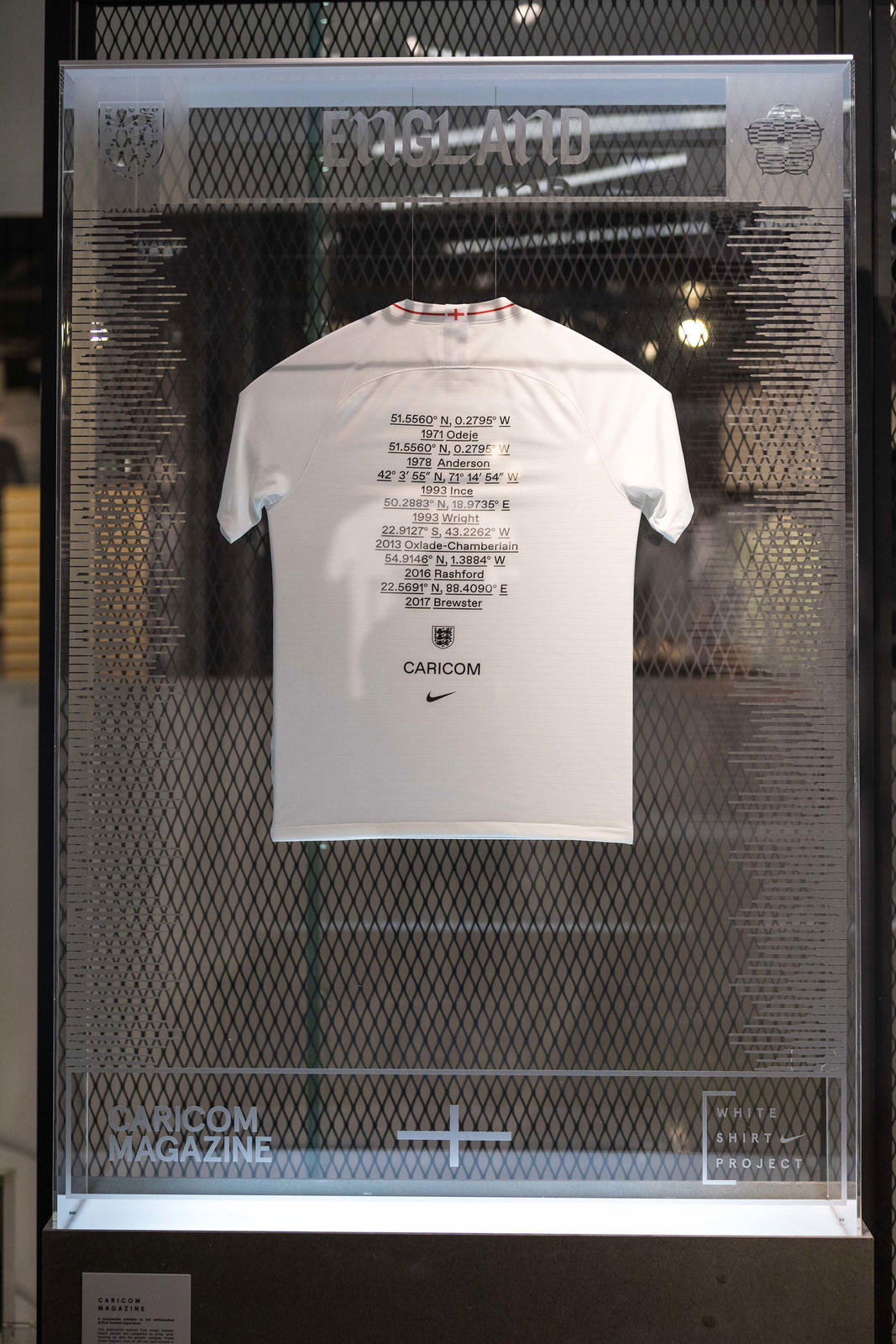 Caricom Magazine, described as an independent bi-annual that explores the intersection of football and the black experience, was founded to generate conversation around racial topics that are absent from mainstream football writing. The coordinates and chronological dates on the back of the jersey refer to the historical milestones made by black players on England’s national team. 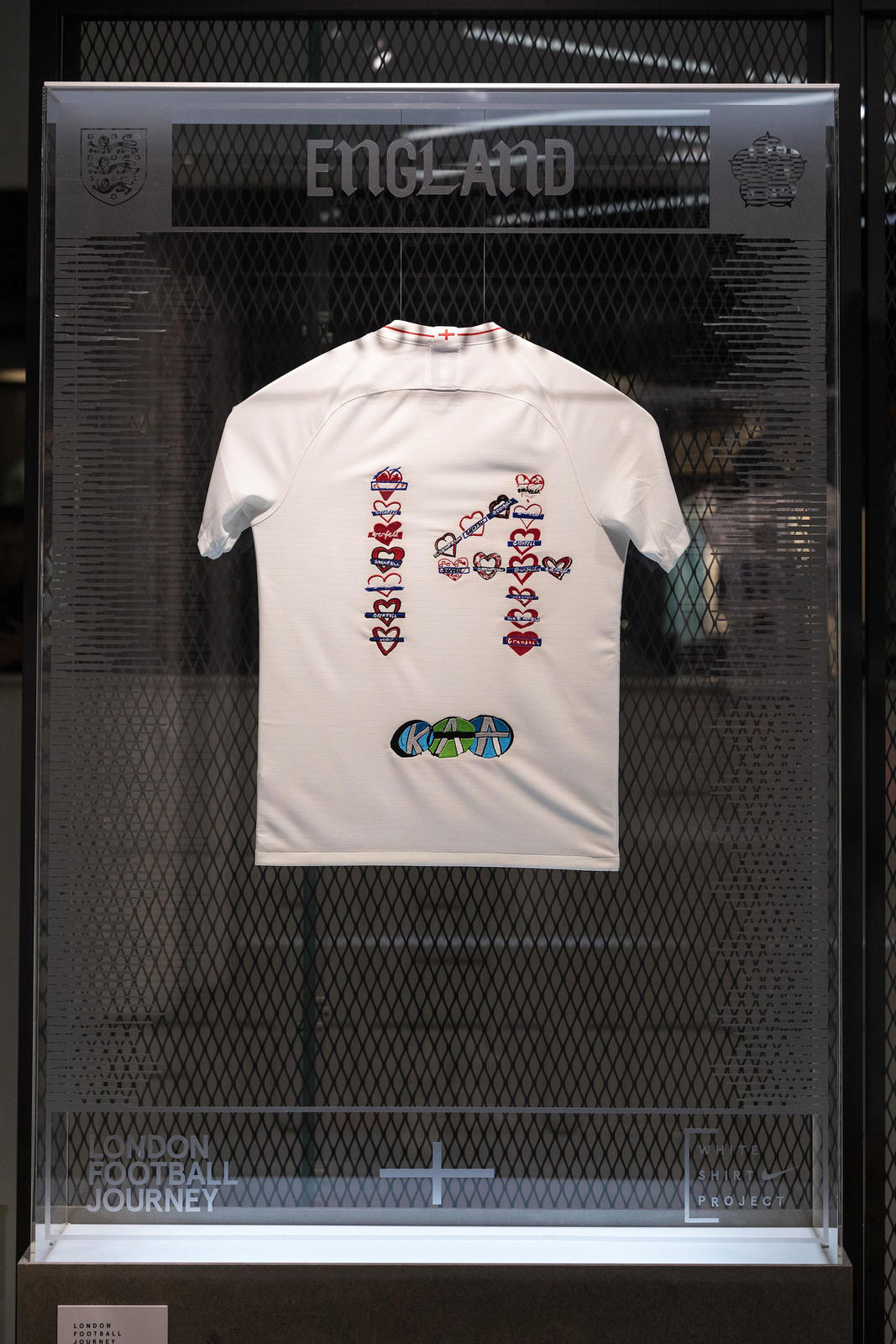 The innovative charity connects young Londoners with football and film, culminating in short film projects directed by the attendees. Students from Kensington Aldridge Academy were inspired to design a jersey that, through digital and hand-done embroidery, honored the victims of the Grenfell Tower fire in 2017. 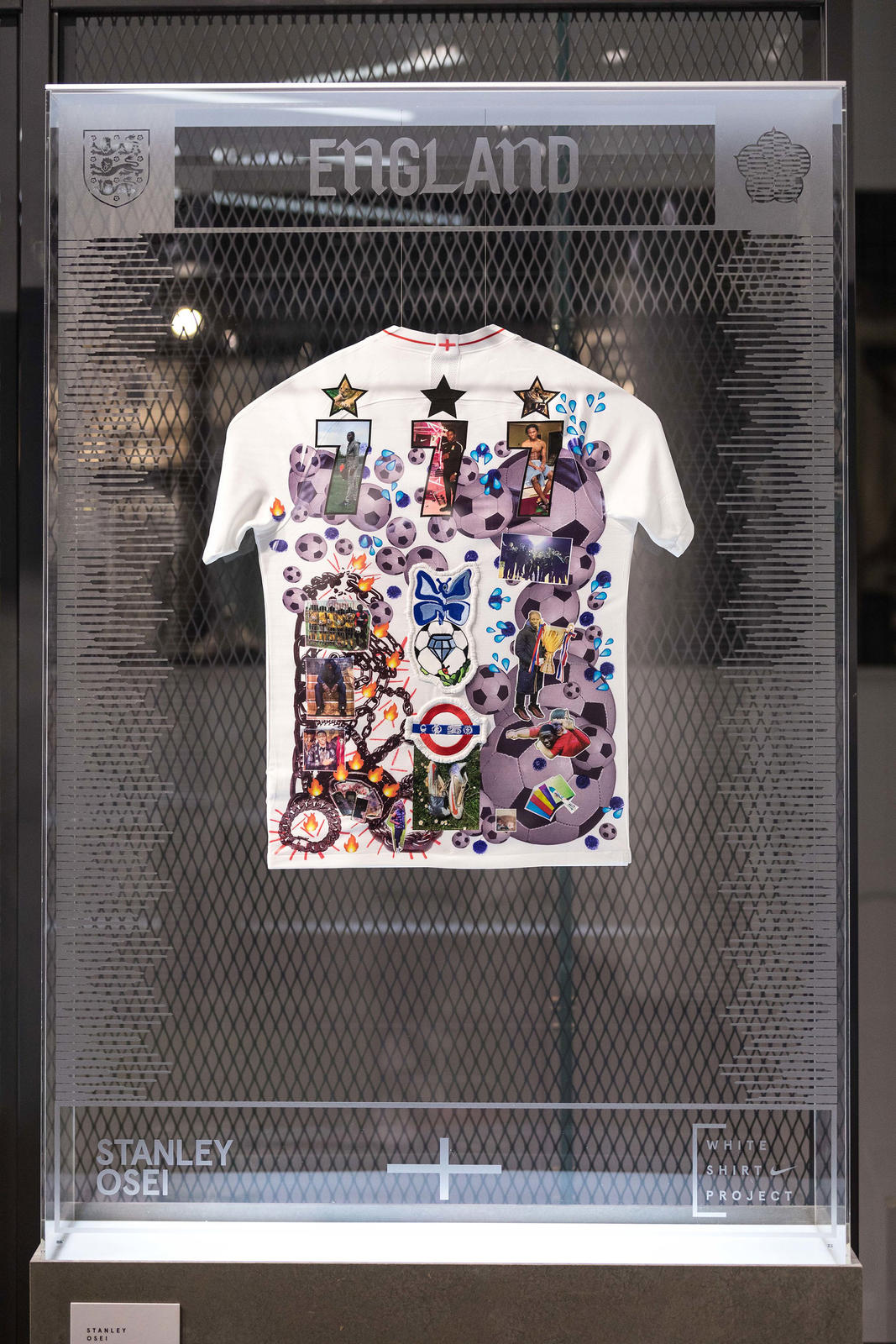 Osei’s “Hidden Jewels” program, designed to keep England’s inner-city children from living lives of crime, was born from personal experience; the Londoner fought through a rough childhood on the streets and is now equipping kids to do the same through sport. His jersey features a collage of images and prints that shows his personal journey to a brighter future. 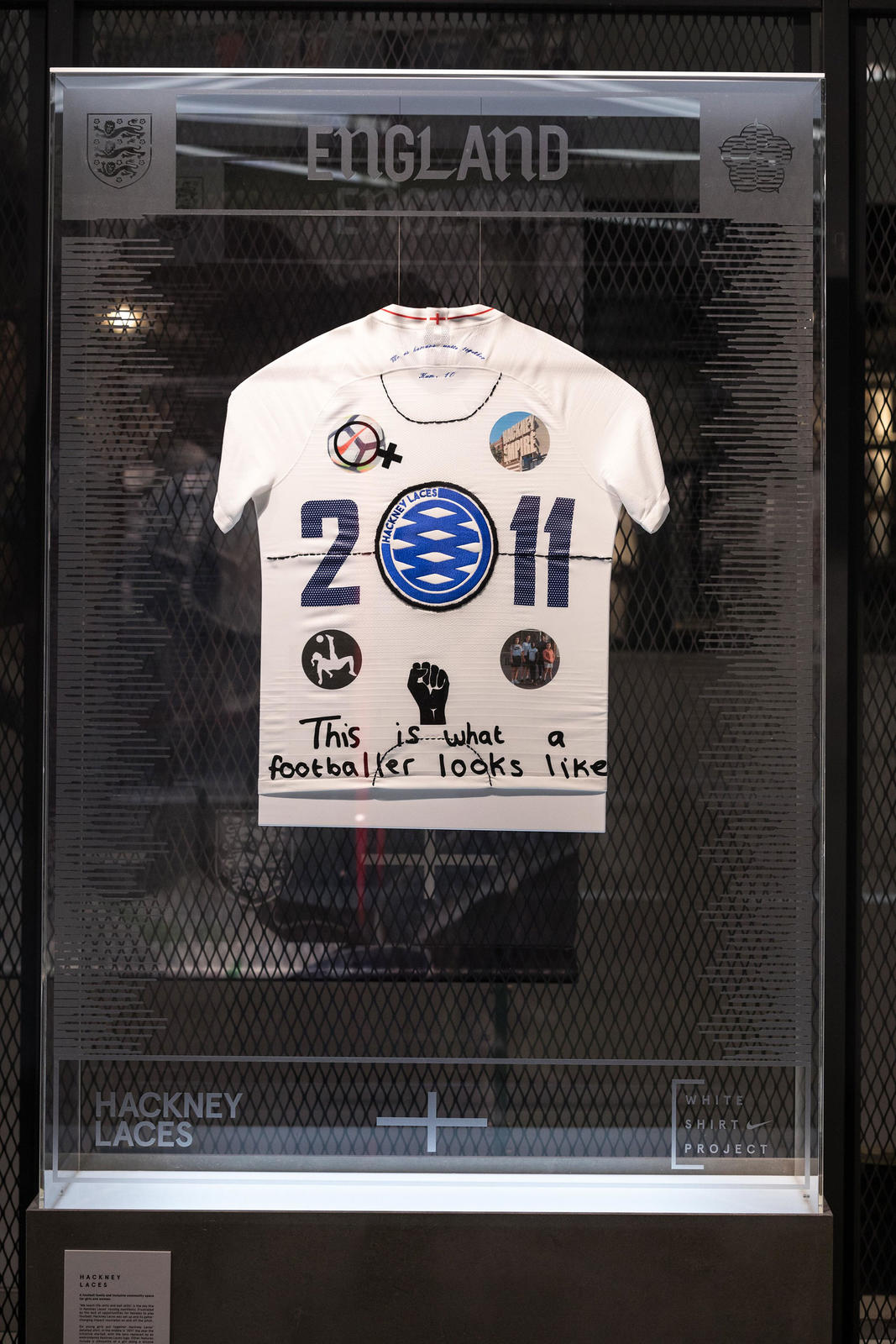 Disappointed by the lack of opportunities for London females to play football, Hackney Laces was founded in 2011 with the intention to unite players of all ages and abilities. Six young girls from the community designed the group’s jersey, which includes the silhouette of a female doing a bicycle kick, a football with the female cross symbol and a photo of the shirt makers. 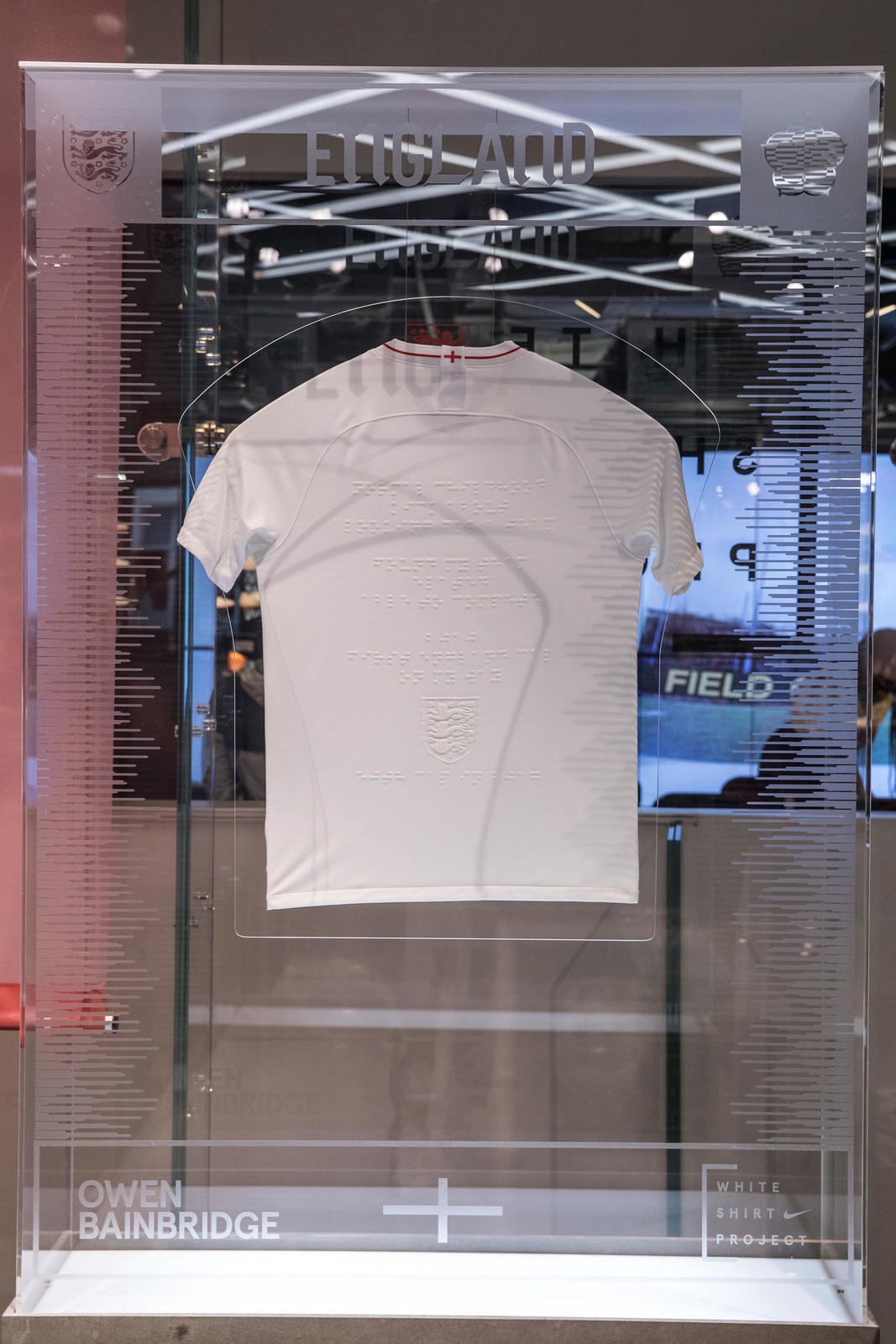 The 28-year-old turned a perceived disadvantage into his strength when he found a team of other partially-sighted players, beginning his path to becoming a pro footballer in 2010 and destroying stereotypes along the way. Perhaps the most experimental shirt of the exhibition, the jersey’s words and badge are printed in Braille, each cell a footprint in Bainbridge’s personal journey.

The Nike White Shirt Project, in partnership with Tottenham Textiles, runs May 25-31 at Niketown London.