Nike Football has announced several additions of new signees to its elite roster. Stay tuned to Nike News and @usnikefootball on Twitter for the welcoming of our new athletes and for more information on Nike Football's family of athletes.

welcome to the family, Derrick Henry 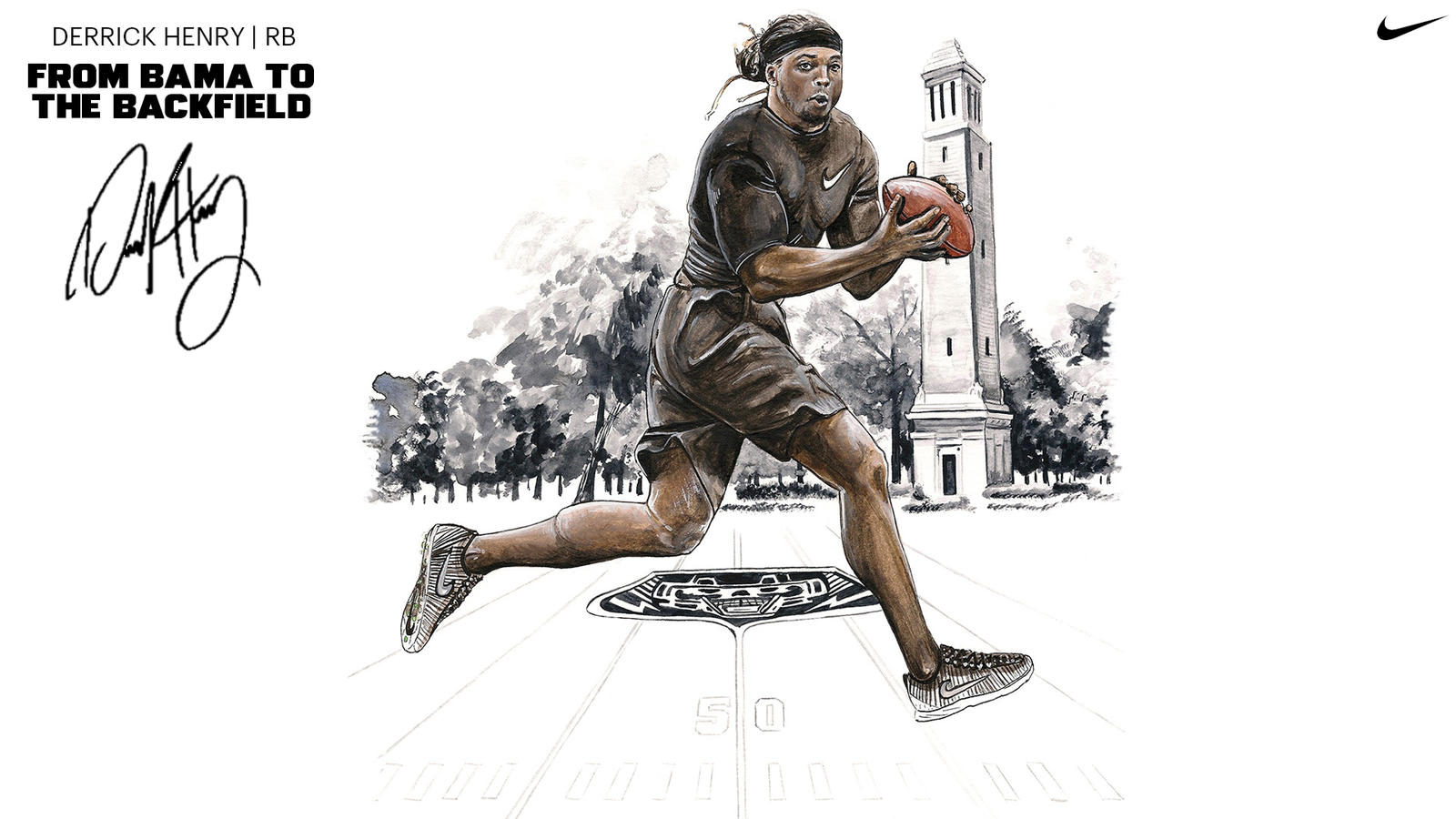 Denny Chimes, in the heart of University of Alabama’s campus, forms the backdrop for Derrick Henry

In his first season as the starting running back for Alabama, Derrick Henry won the Hesiman Trophy and led his team to the College Football Playoff National Championship. At 6’3” and nearly 250 pounds, Henry carries a big presence in the backfield and pummels defenders with his strength.

Welcome to the family, Ezekiel Elliott 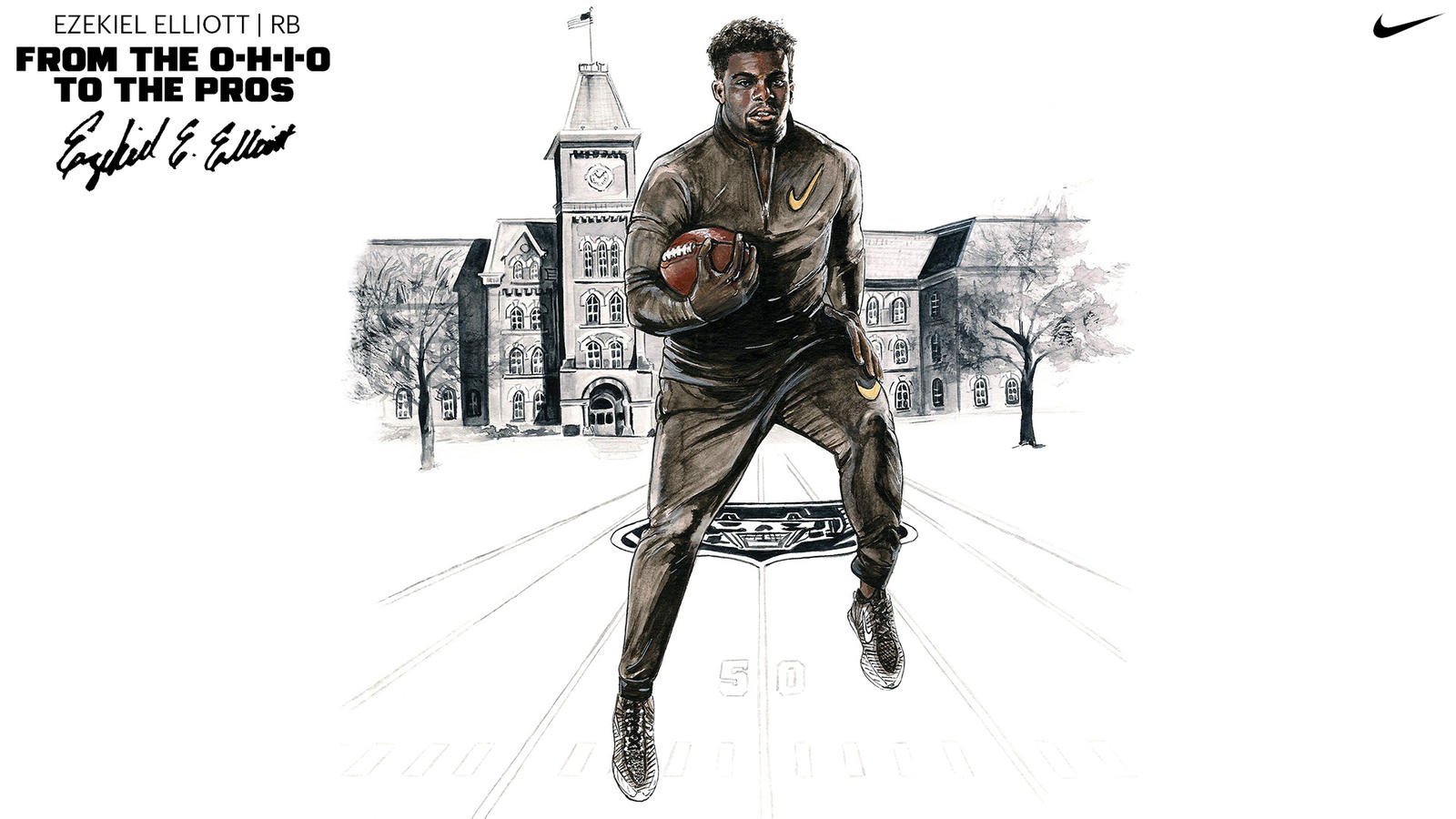 University Hall, one of Ohio State’s most celebrated building, forms the backdrop for Ezekiel Elliott

In just three years at Ohio State University, Ezekiel Elliott finished with the second most rushing yards in school history (3,961) and the fourth most touchdowns (44). Elliott does not shy away from the big stage and bright lights. In the 2014-2015 College Football Playoff National Championship game, the elusive running back rushed for 230 yards and two touchdowns to help lead his team to victory. With his combination of speed, power, vision, pass-catching ability and decisiveness, Elliott is one of the most coveted running backs coming into the draft.

Welcome to the family, Will Fuller

A standout wide receiver renowned for his electric speed, Will Fuller posted a 4.32-second effort in the 40-yard dash, topping all wide receivers in the 2016 draft. He tallied 62 receptions, 1258 yards and 14 touchdowns in 2015.

Welcome to the family, Laremy Tunsil 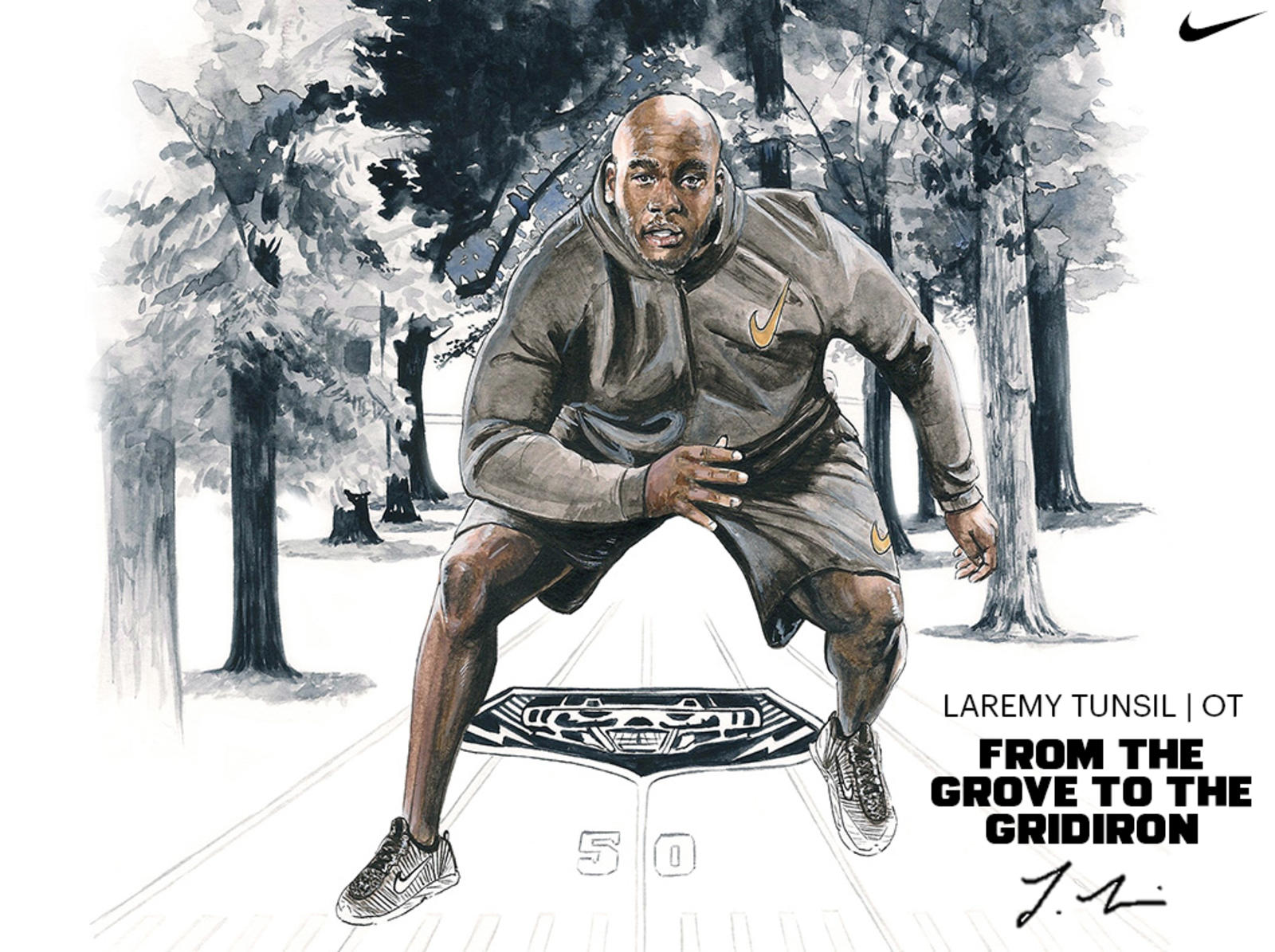 The Grove, which Laremy Tunsil is seen in front of, is the legendary tailgating spot at the center of the University of Mississippi campus.

Laremy Tunsil, an All-American out of the University of Mississippi, allowed just two sacks in his 28 career games as the Rebels’ left tackle. Tunsil also impressed at the 2016 combine and is expected to be a top pick in the 2016 draft.

WELCOME TO THE FAMILY, CARSON WENTZ 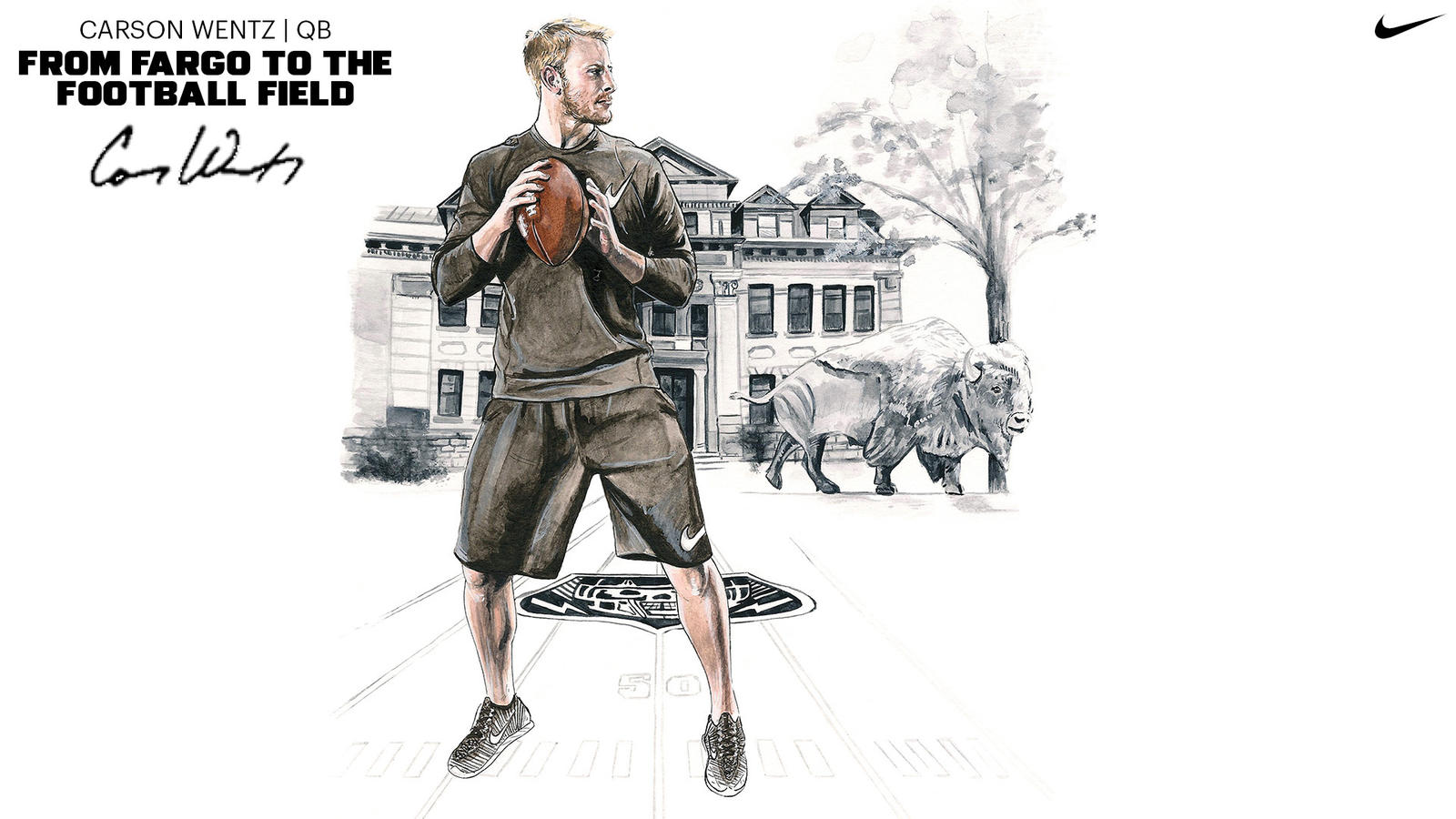 As 2014 and 2015 team captain for the North Dakota State Bison, Wentz led his team to back-to-back NCAA Division 1 FCS national championships. Additionally, at the 2016 combine, Wentz was a top performer, posting a 4.77-second effort in the 40-yard dash, second among all participating quarterbacks. Moreover, Wentz was one of the top three quarterbacks in the broad jump and three-cone drill.

WELCOME TO THE FAMILY, DEFOREST BUCKNER 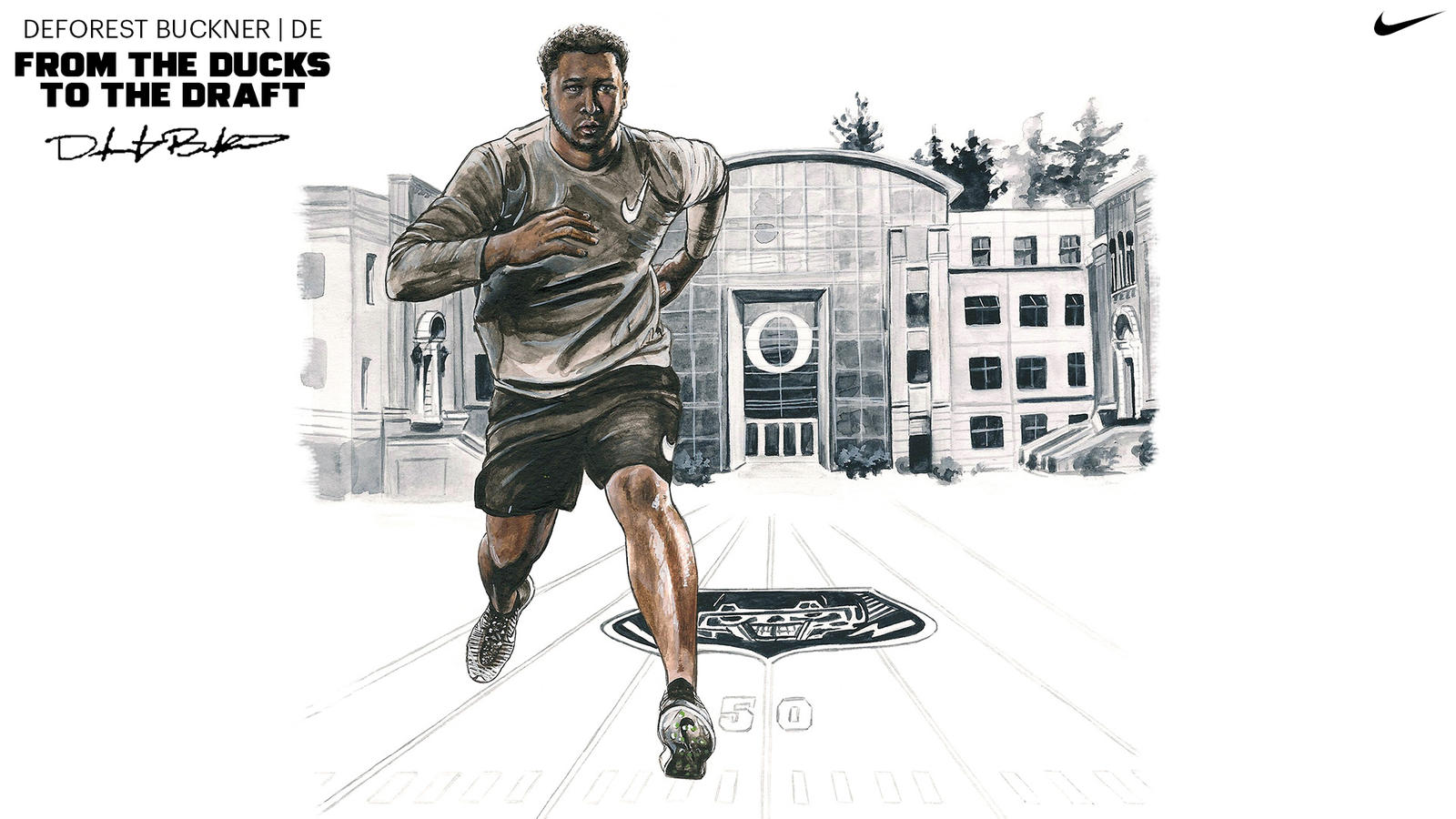 DeForest Buckner is pictured in front of the University of Oregon’s Lundquist College of Business, which features the school’s iconic “O” above its entrance.

The 2015 Pac-12 Defensive Player of the Year, DeForest Buckner dominated opposing offenses at the University of Oregon. In 2015, the defensive end won the Morris Trophy, voted on by Pac-12 offensive linemen who lined up across from him. Standing at 6’7” and weighing nearly 300 pounds, Buckner has the ideal combination of quickness, strength and athleticism to excel at the next level.

WELCOME TO THE FAMILY, JARED GOFF 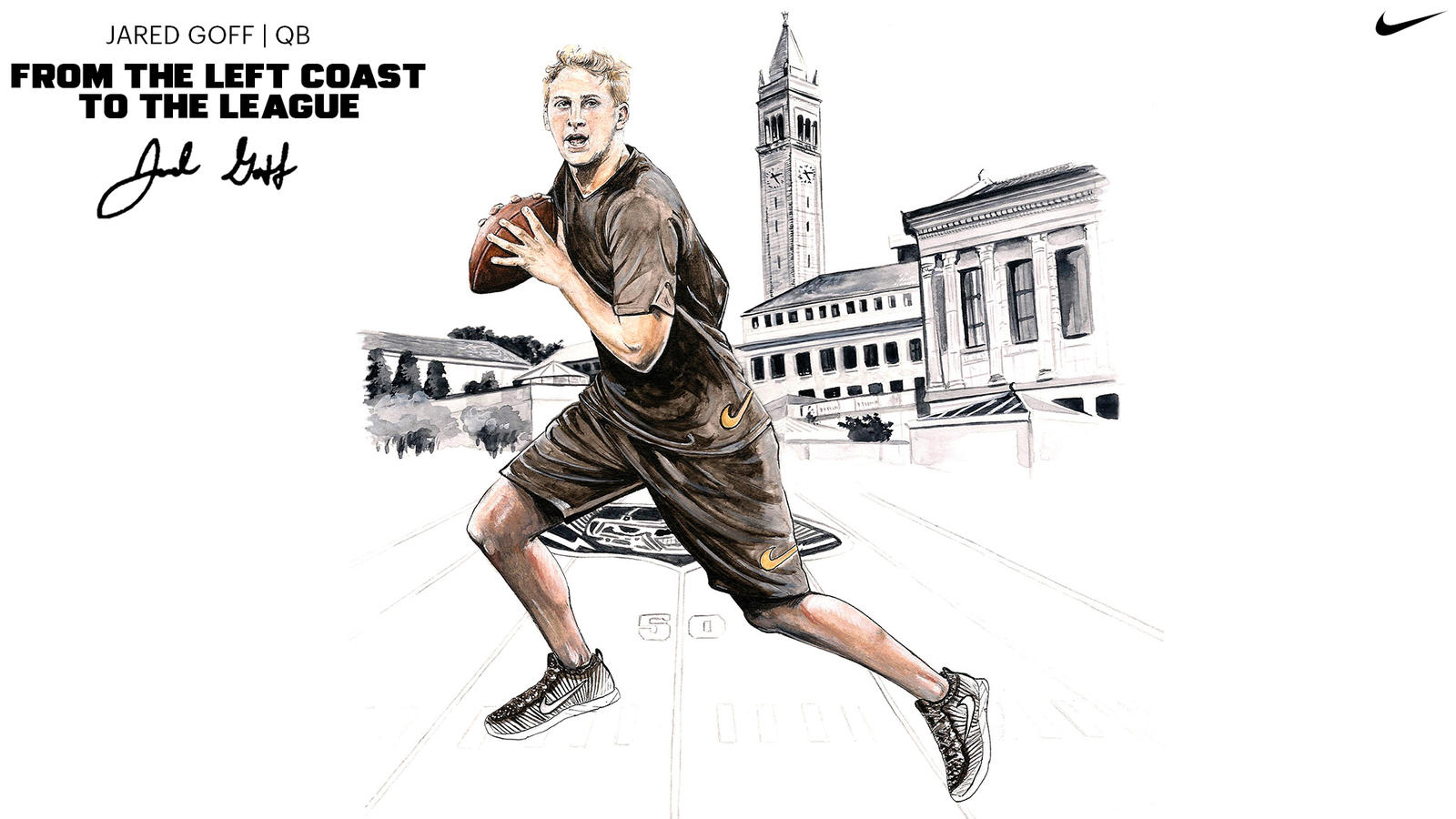 In the background of the illustration is Cal’s most recognizable on-campus symbol, the Sather Tower, also known as The Campanile.

At the University of California, Berkeley, Jared Goff set 26 records, including career marks for passing yards, touchdown passes, total offense and completions. He is considered the draft’s top quarterback prospect.

WELCOME TO THE FAMILY, PAXTON LYNCH 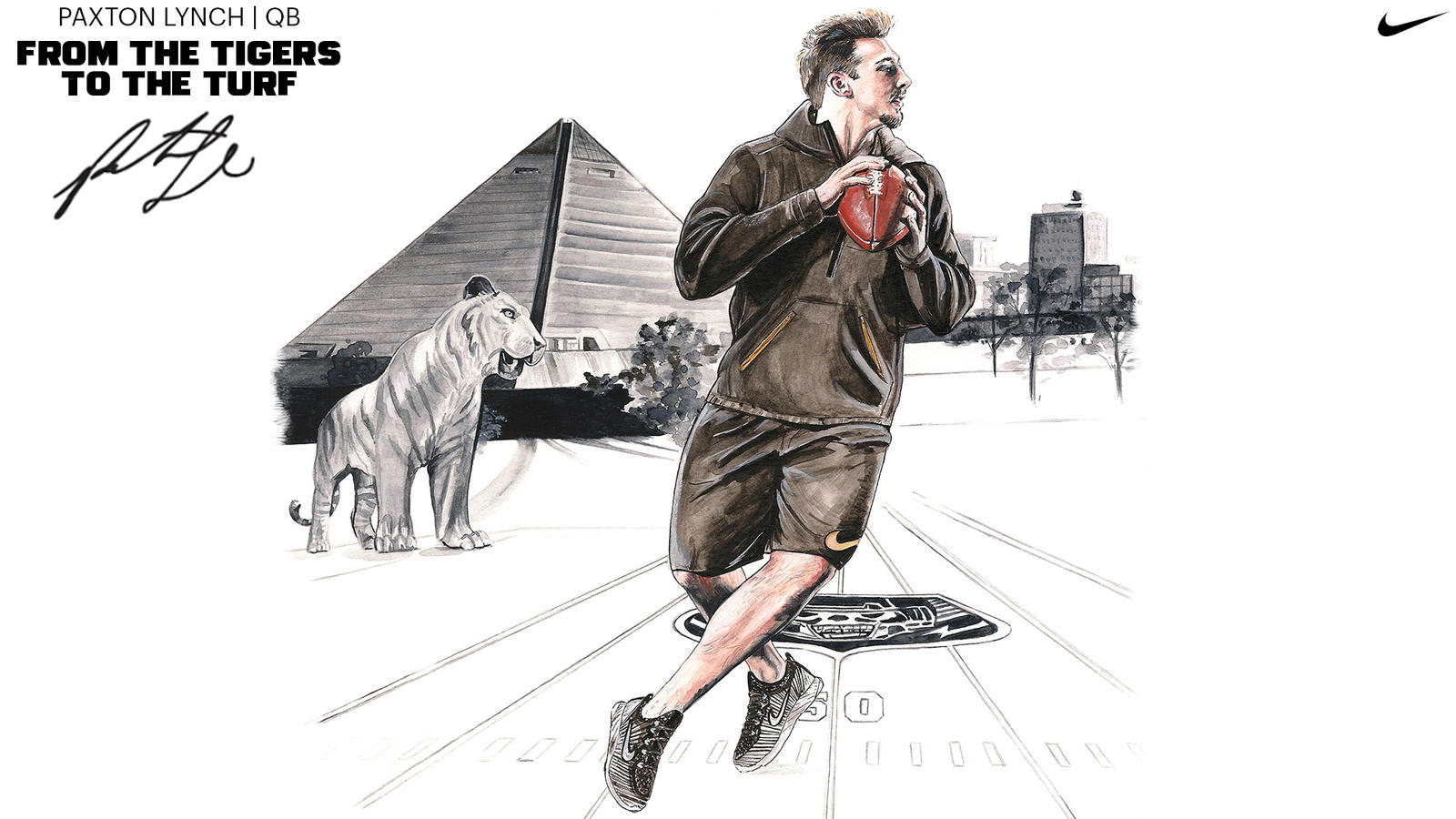 Paxton Lynch is expected to be a first-round draft pick. In the background of the illustration is the iconic Memphis Pyramid located in downtown Memphis on the banks of the Mississippi River. The Tiger pays tribute to the University of Memphis.

Quarterback Paxton Lynch exploded onto the scene this past season at the University of Memphis, which earned him first-team All-AAC honors and recognition as a Manning Award finalist. At six-feet, seven-inches and 244 pounds, Lynch displays an imposing yet agile presence in the pocket.

Welcome to the Family