Nike traction for a variety of surfaces and playing conditions.

Nike has long been known for introducing iconic silhouettes, materials, and colors to the football pitch – recognizable to players and fans alike – but there’s an impactful revolution underway on the underside of the boots. “Nike Football has made more advancements in traction over the past two years than in the previous twenty,” proclaims Max Blau, VP Nike Football Footwear. “With rapid prototyping from 3-D printing, hard science, and Finite Element Analysis (FEA), we’ve taken assumptions and guesswork out of the equation,” continues Blau. “The traction patterns we’ve designed are proven to perform.”

While traction has always served as a primary purpose for football boots, few players could describe the stud configuration of their boots with their eyes closed. Nike engineers obsess such details, spending countless hours testing every possible shape and arrangement to ensure the right traction for every style of play, on any kind of surface, and in all conditions.

The recent Mercurial Superfly and Magista 2 launches exemplify this emphasis. The Mercurial Superfly is built for speed, with angled studs in the forefoot for propulsion and straight chevrons in the heel for braking (as players can only accelerate to full speed when confident they can brake as needed). Magista 2 focuses on rotational traction with chevrons encircling the ball of the foot combined with medial and lateral half-conical studs. Both boots feature completely revamped traction over their previous model, a trend that will continue as traction science spreads to the other footwear silos.

“Nike Football has evolved to where every stud and its placement serve a dedicated purpose,” explains Blau. “We study the depths to which each cleat penetrates the grass to ensure the amount of traction is just right.” 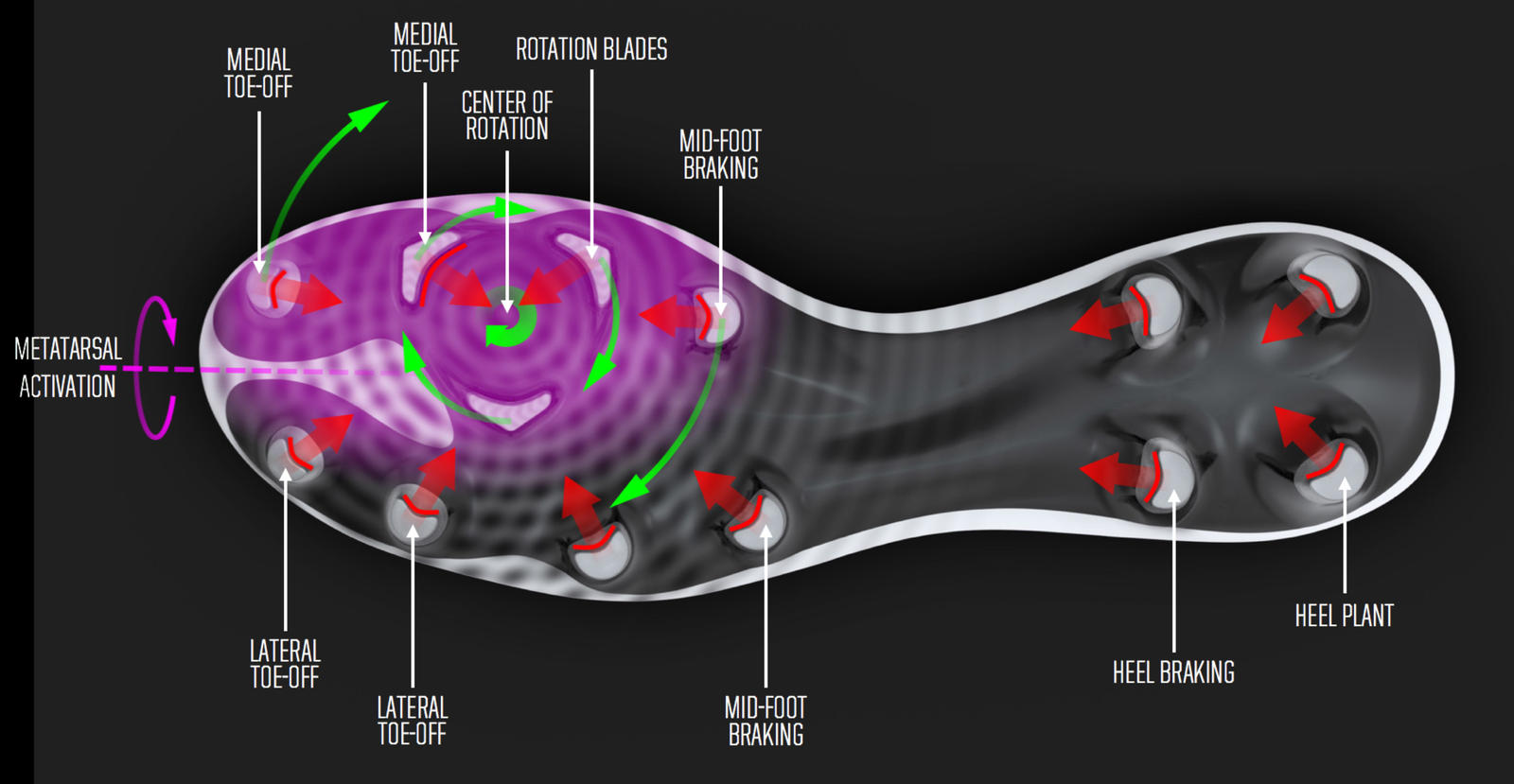 But grass isn’t the only surface football is played on and therefore not the only pitch receiving attention from Nike’s traction experts. The number of artificial grass fields has risen sharply in recent years and presents a different set of challenges. “When you’re dealing with artificial grass, you have to account for the combination of artificial grass blades and the tiny rubber pellets and how they grab the plate. Heat is also a concern as the rubber heats up in a way that grass would not,” explains Blau.

To combat these issues, Nike has introduced an entirely new line-up of artificial grass (AG) boots. The studs on the AG plates are shorter than on firm ground (FG) boots and hollowed out. This allows for quicker responsiveness and helps prevent the boot from getting too deeply embedded in the artificial surface. A Texon® shield has been added to the inside of the boots to reduce the amount of heat players may feel against their foot when playing on AG surfaces in hot temperatures. Durability has also been enhanced to combat the effects of playing on an artificial surface. 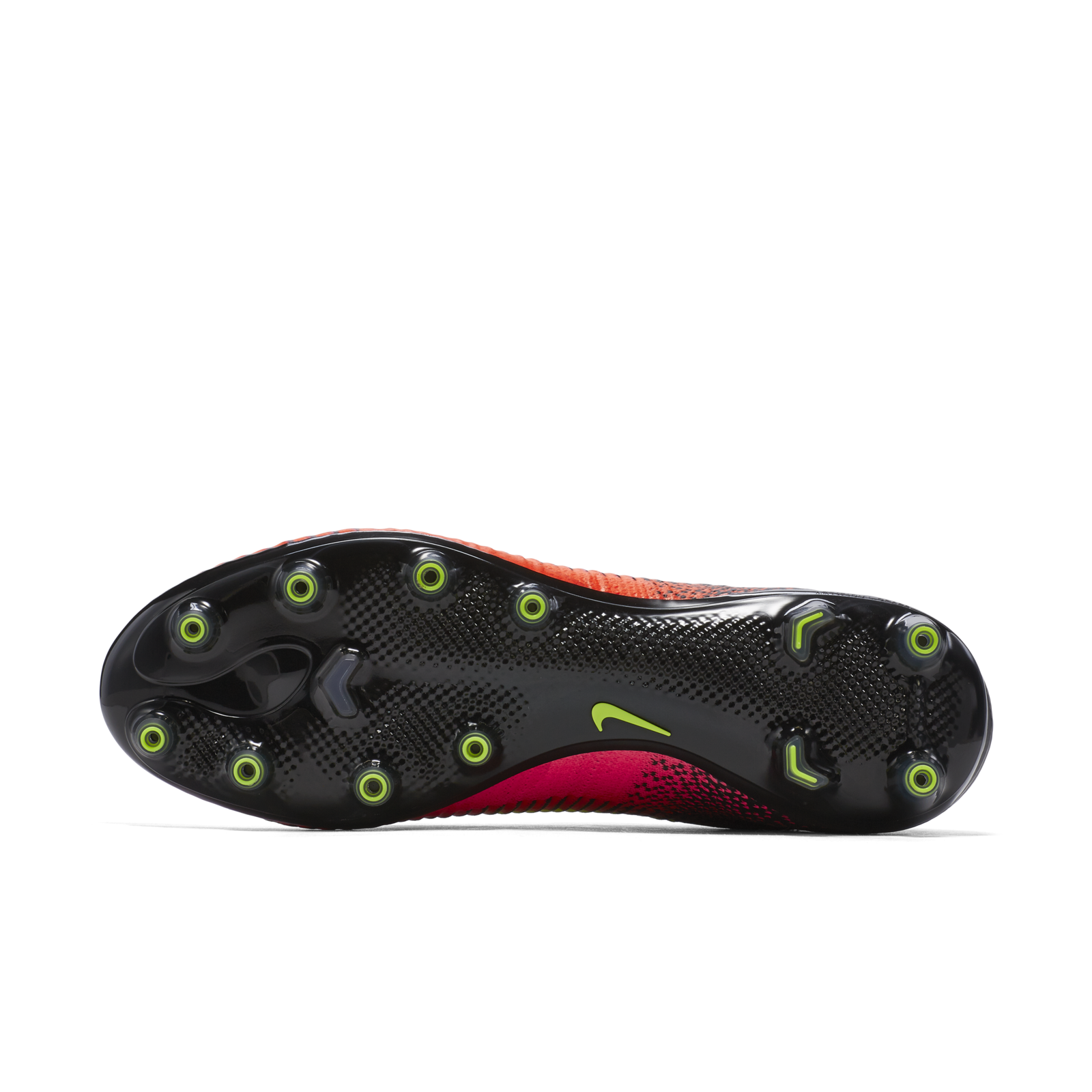 Traction has also been revamped for small-sided football, typically played on hard, smooth surfaces. Underfoot control of the ball is essential on these fast surfaces, so the traction has the dual purpose of ball-control. “When we initially launched NikeFootballX for the small-sided game in 2015, all of the boots had the exact same traction pattern,” explains Blau. “Now we’re applying the same obsession with traction science across all Nike Football products.” For example, the latest MercurialX features a tri-star outsole with flex grooves while the recently launched MagistaX utilizes a circular herringbone outsole. Both provide the same playing style benefits as their cleated counterparts, while incorporating cushioning to account for the hard surface. 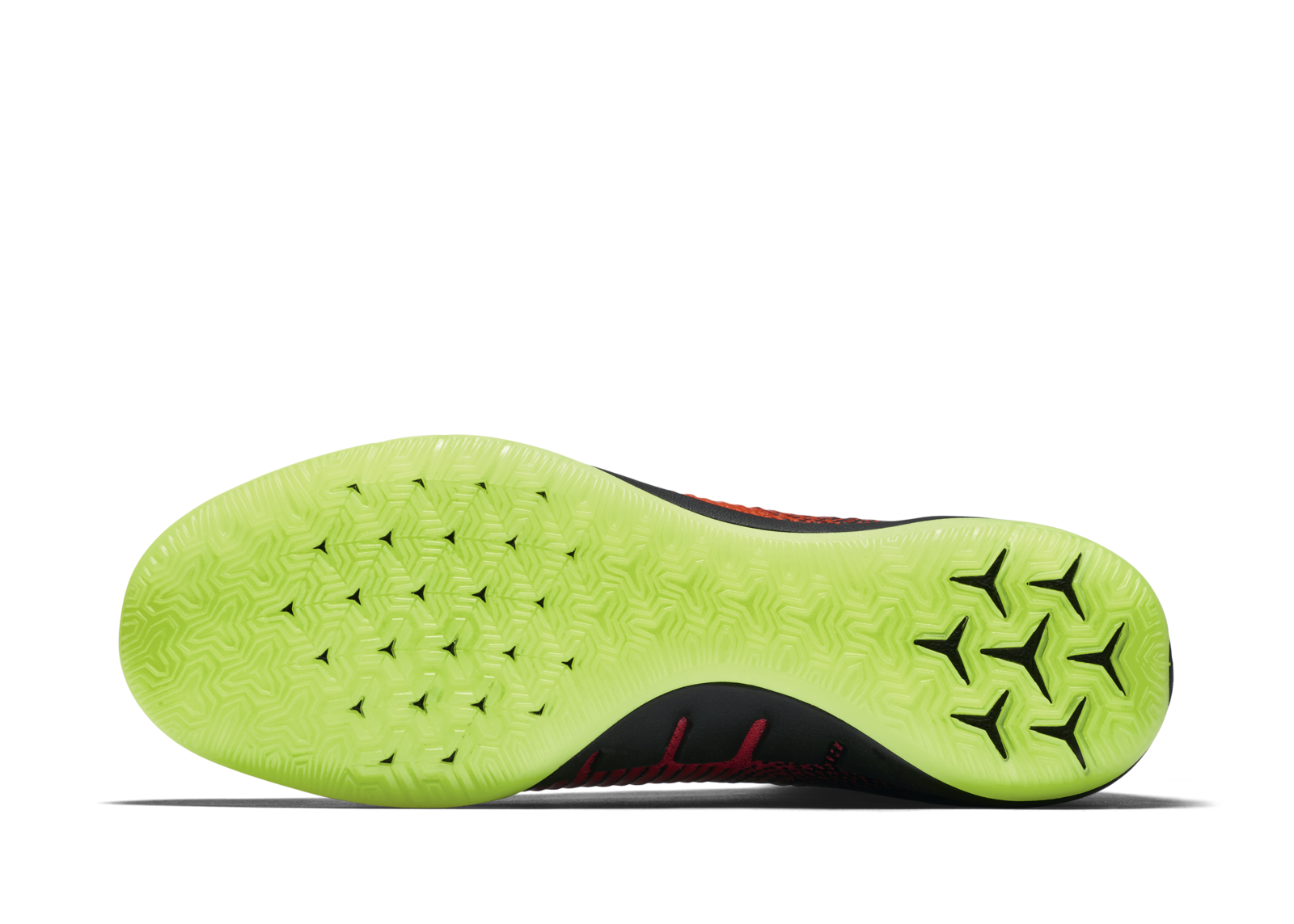 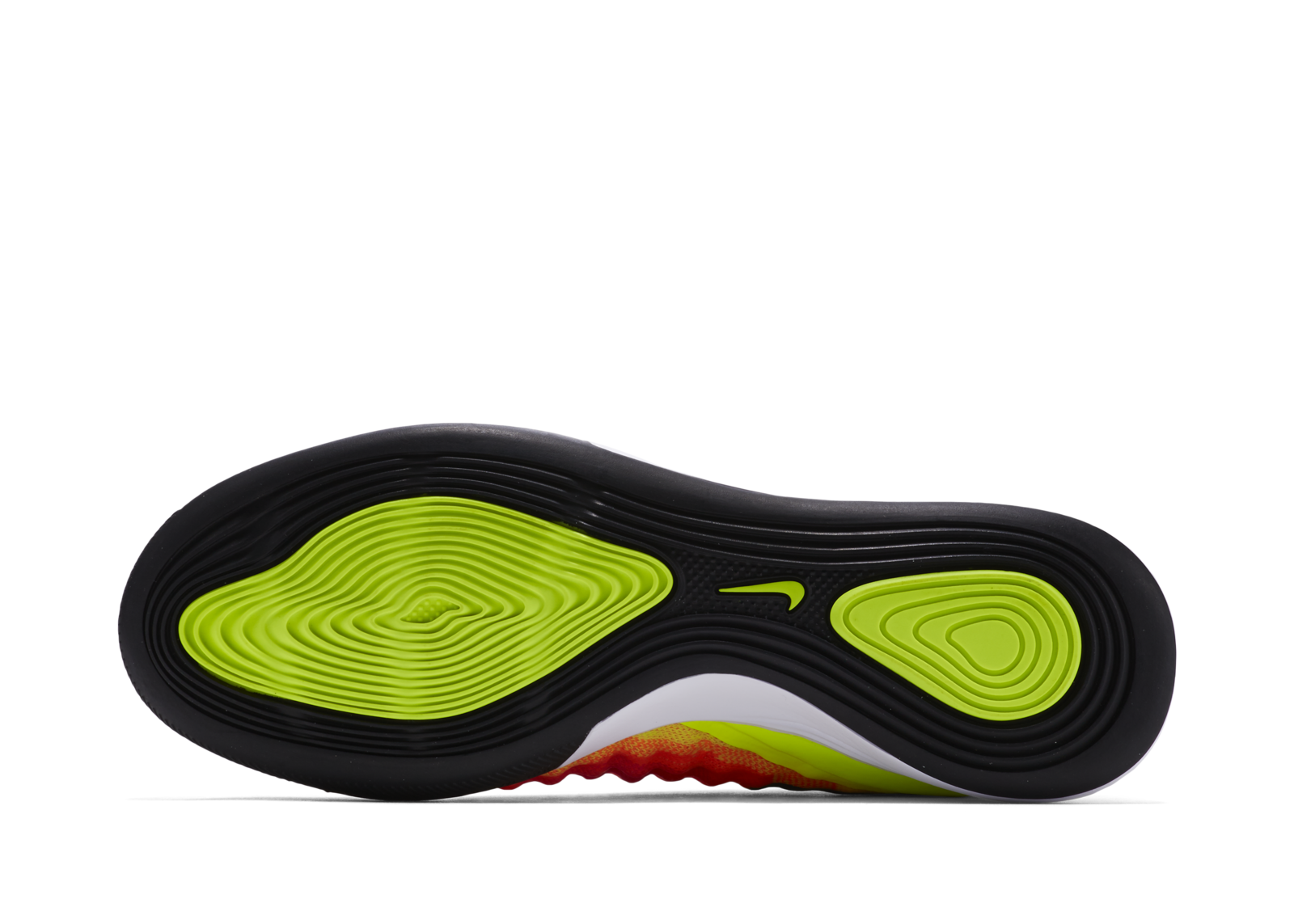 With so many surfaces and playing conditions to solve for, the worst scenario led to the greatest breakthrough. Wet, muddy pitches have long led to slippage, clogging, and weight from all of the mud that accumulates against the plate over the course of a match. These conditions can slow players down and can cause them to lose their footing altogether. Nike spent years developing its patented Anti-Clog Traction technology, which helps prevent mud from sticking to the sole plate. “Anti-Clog Traction is a game changer,” exclaims Blau. “It’s such a difference maker that players who don’t play in it are putting themselves at a competitive disadvantage.” 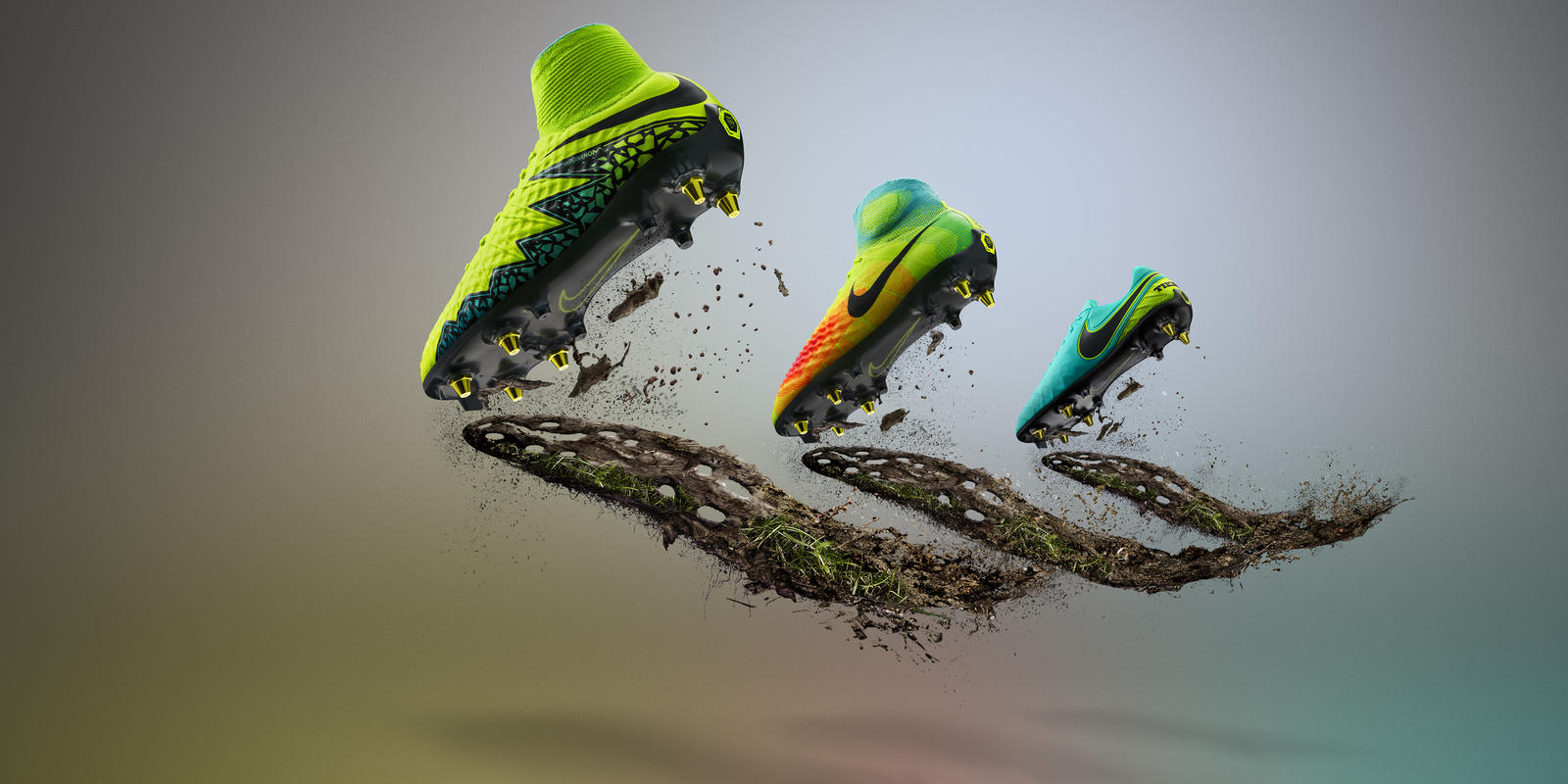 A traction revolution is underway at Nike and, true to the ethos of the project, there are no signs of slowing down. Nike’s engineers, designers and scientists will continue to experiment with countless materials and configurations to ensure that what’s on the bottom of the boot never lets down the player wearing it.