Nike entered the game of football in 1971 with a black-and-white molded rubber cleat simply called “The Nike.” Today, Nike's most advanced football cleat combines a recycled polyester upper spun from plastic bottles with the lightweight strength of carbon fiber in the plate. To stay at the forefront of the changing game, Nike has developed products with direct input from top performers on both sides of the field, solving for known problems and future needs. Nike Football’s 44-year history shows how deep innovation breeds success on the gridiron. 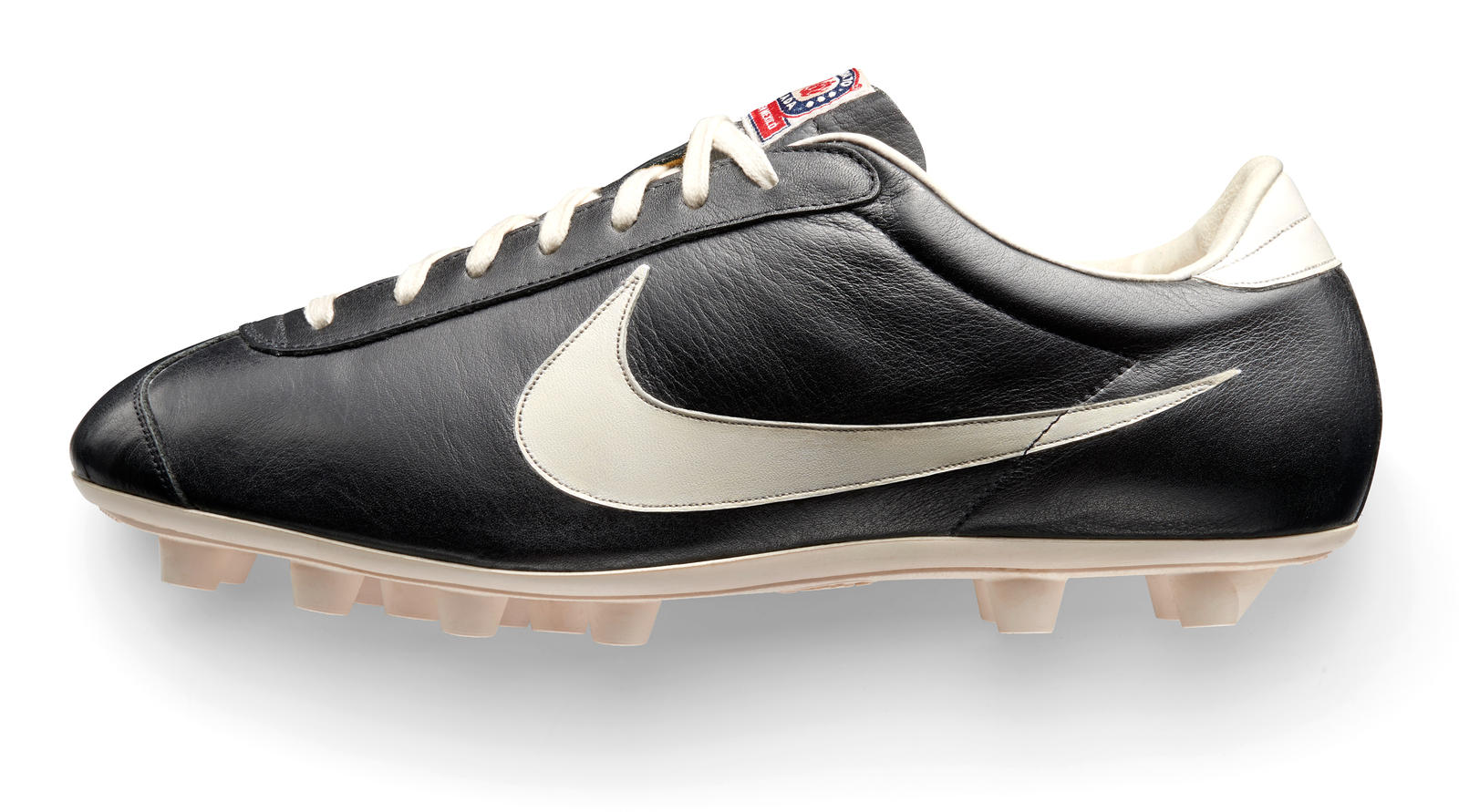 The company's first shoe to feature the Swoosh, the Nike was an enormous aesthetic and technical stepping stone for Bill Bowerman and Phil Knight’s nascent brand. With its molded rubber outsole — nine cleats at the forefoot and four at the heel — designed for control, traction and stability, the Nike was well suited to both football and soccer. Though a brazen departure from the brand’s running roots, early interest in the shoe proved a solid future for molded studs. Setting a blueprint for iteration and improvement, the style swiftly progressed into Nike’s next multi-purpose molded cleat, 1972’s Nike Turf Quick. These cleats were an early indication of Nike’s gridiron ambitions, illustrating the company’s mission to serve the needs of athletes in an evolving sport.

Initially adopted in the late 1960s, turf surfaces gained favor on the gridiron during the next decade. Responding to the surface changes and resulting style of play, Nike took inspiration from its running shoes — specifically the textured rubber Waffle sole — and adapted the technology for football. After two years of extensive testing with several college programs, Nike released the Astrograbber in 1976 as part of a trio of truly football-focused footwear, alongside the Nike Sudden Six and Nike Turf Star. The Astrograbber came in white or black, and featured a flat-sided Waffle cleated outsole for optimal leverage on artificial turf.

The shoe proved the potential of molded outsoles and set off a crucial stage of growth for Nike Football. 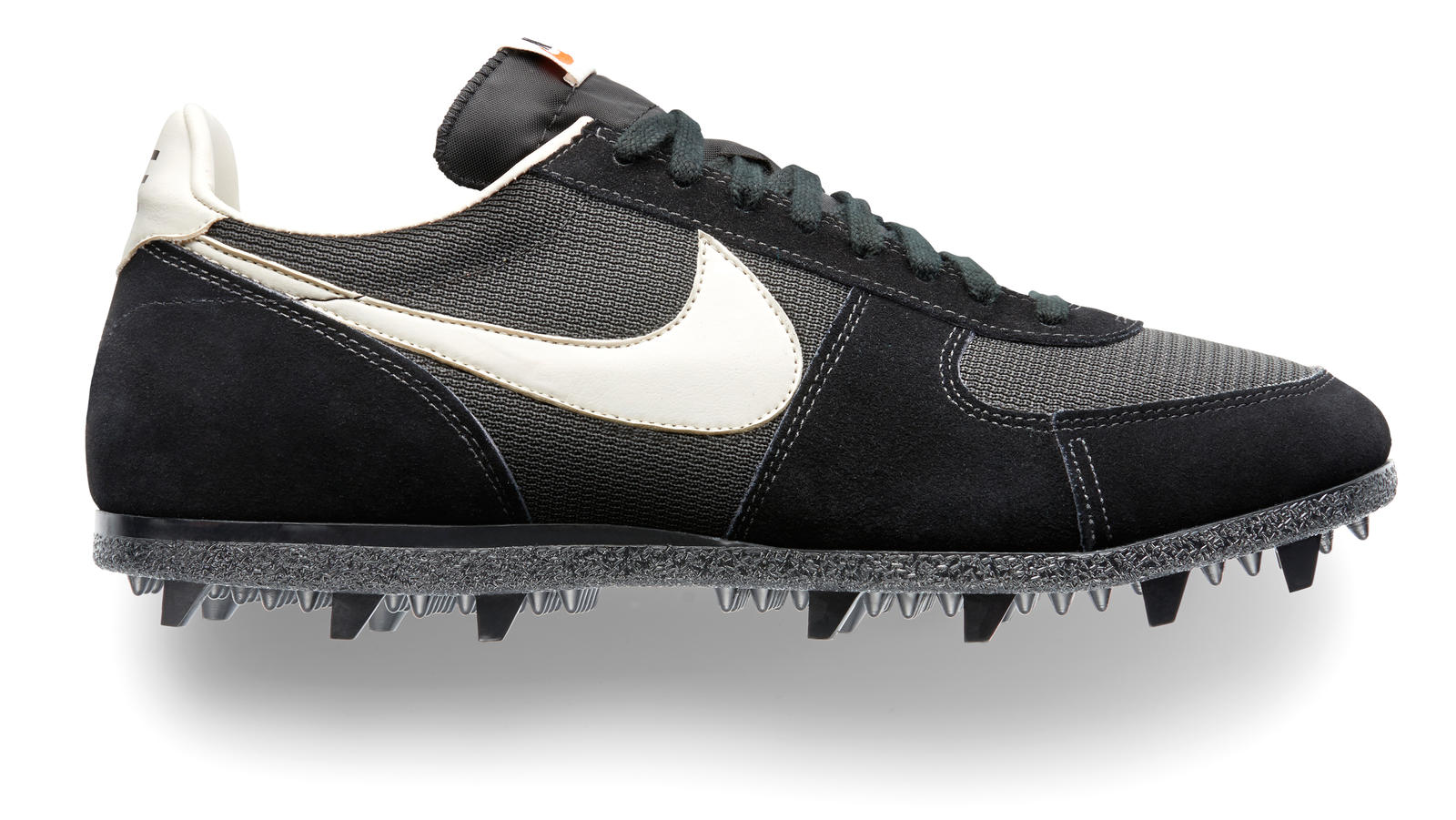 The first molded shoe designed for use on grass and turf, the Nike Shark marked a breakthrough for Nike Football. A revolutionary design for its time, the Shark incorporated a lethal combination of 13 perimeter cleats and an interior of shorter, cone-shaped studs that maximized grip and gave players impunity to attack on all-surfaces. Furthermore, the balanced-configuration of molded elements suited all players — maximizing the tight footwork of linemen and the explosive speed of skill players equally.

Before the Nike Shark, players often packed two pairs of cleats to account for different field types. This game-changing shoe eliminated that need and introduced an entirely new approach to designing football footwear. Since 1980, the Shark series has been a mainstay of Nike Football and remains in the line today. The Nike Boss Shark, introduced in 1992, integrated a running-shoe inspired, cushioned midsole. This enhancement in comfort, once again, drove home Nike’s capacity to innovate by leveraging insights from other sports. 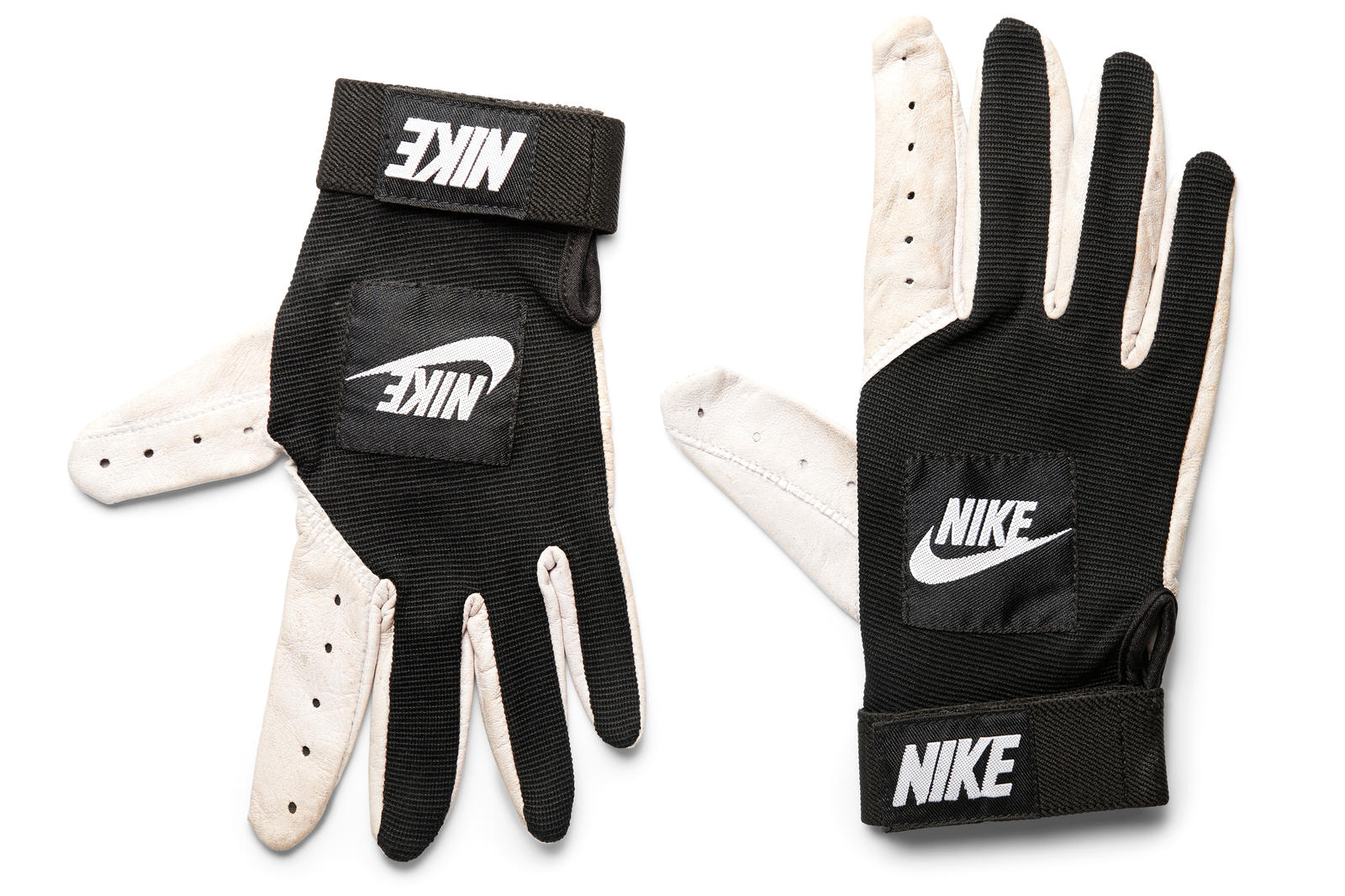 The current Nike Vapor Knit Glove, tested extensively by college and pro athletes including star rookie Odell Beckham Jr., incorporates an extended, full-length Magnigrip surface and has a knit back, inspired by Flyknit footwear. The design promotes a full range of motion and reinforces the versatility of proprietary Nike technology. 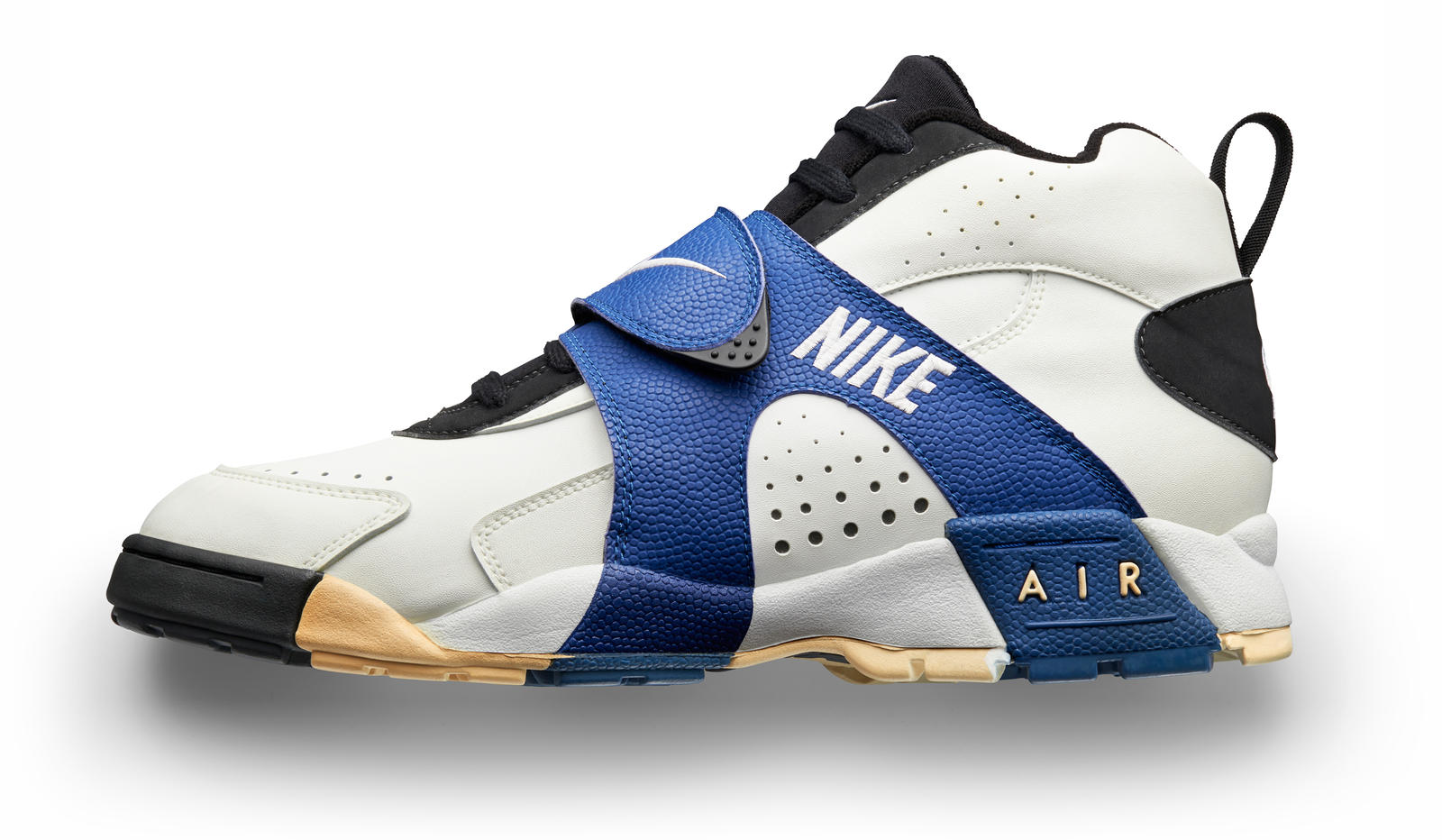 During the ‘80s, Nike introduced multi-sport footwear, packing the cushioning, support and traction needed for running, court sports and lifting weights into one versatile shoe, giving rise to cross-training. The Nike Air Trainer 1 was the first shoe designed for the new fitness segment. Cushioned for forward motion (running) but supportive enough for lateral movement (cutting and pivoting), cross training footwear met the demands of football players seeking enhanced stability to match their speed and agility.

Insight drawn from cross training was applied to Nike Football’s next game-changing development, the Nike Air Veer. Drafting off of 1992’s Nike Air Bo Trainer — the culmination of five years of working with otherworldly athlete Bo Jackson — the Nike Air Veer featured a distinctive mid-foot support strap providing 360° of stability (the strap was a first for cleats). Aside from movement-enhancing function, the design created an immediately recognizable on-field presence and an aesthetic that would come to dominate the gridiron. 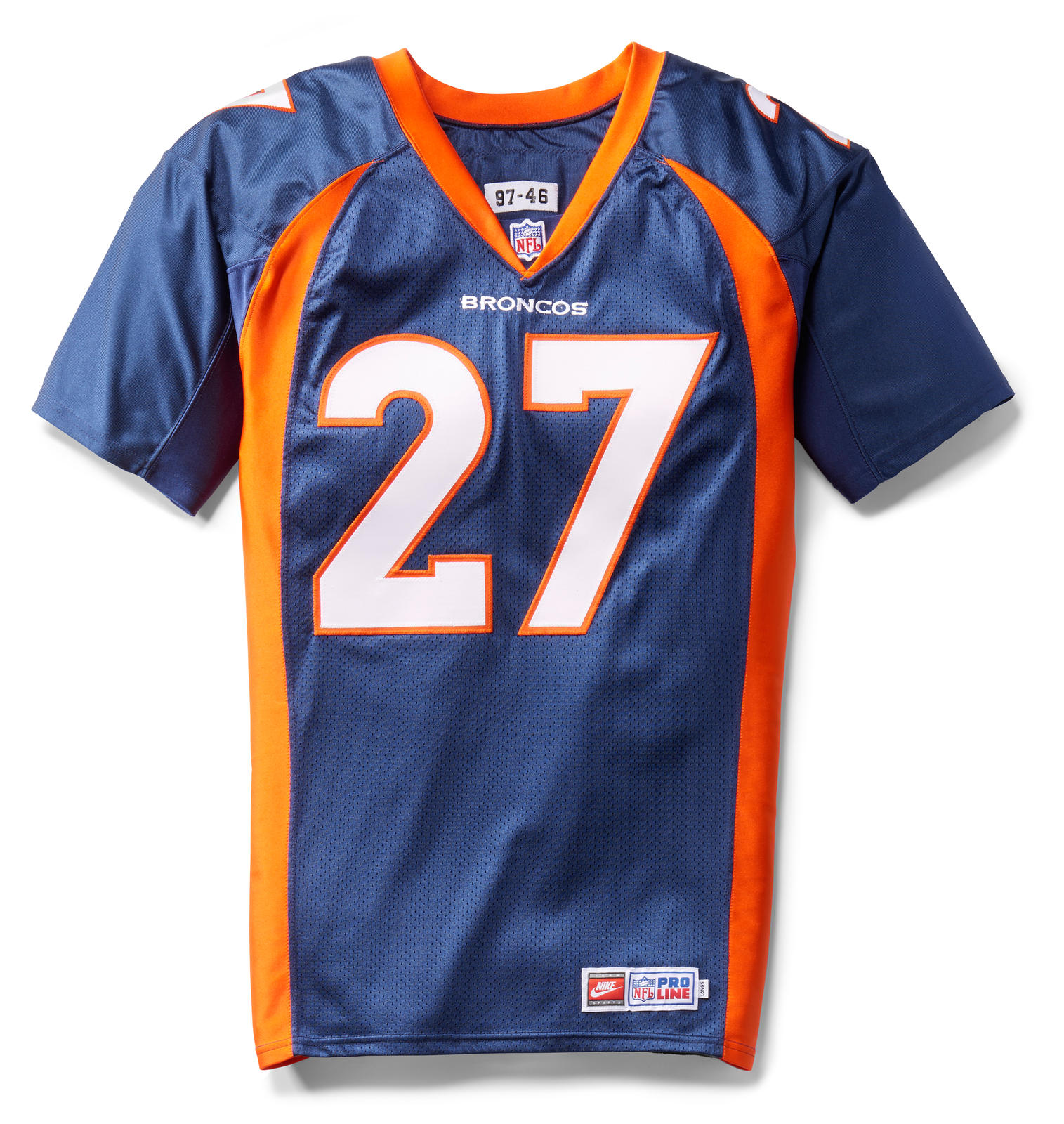 Nike signed an apparel contract with the NFL in 1995, initially outfitting the Dallas Cowboys, Denver Broncos, Jacksonville Jaguars and Oakland Raiders. The Cowboys went all the way in the team’s first year wearing the first NFL Nike uniforms.

When asked to redesign the Denver Broncos uniforms, Nike reconsidered the garments’ look and performance. Coaches and players wanted a tighter jersey that was harder for the opposition to grab. Nike’s technical solution was a highly elastic, breathable “batwing” panel under the arm, giving the jersey a distinctive appearance and providing unrestricted motion.

Tailoring the fit also introduced a radical shift in thinking: uniforms should be designed to meet the demands of specific positions. Nike observed how players wore their respective jerseys, and adapted fit to account for differences in pads and pad sizing. The evolved uniform was fabricated from non-restrictive materials that work fluidly with the game’s essential equipment.  Today, Nike outfits the entire League as the official uniform supplier of the NFL, providing on-field innovations in baselayer, sideline and practice wear for the League’s 32 teams. 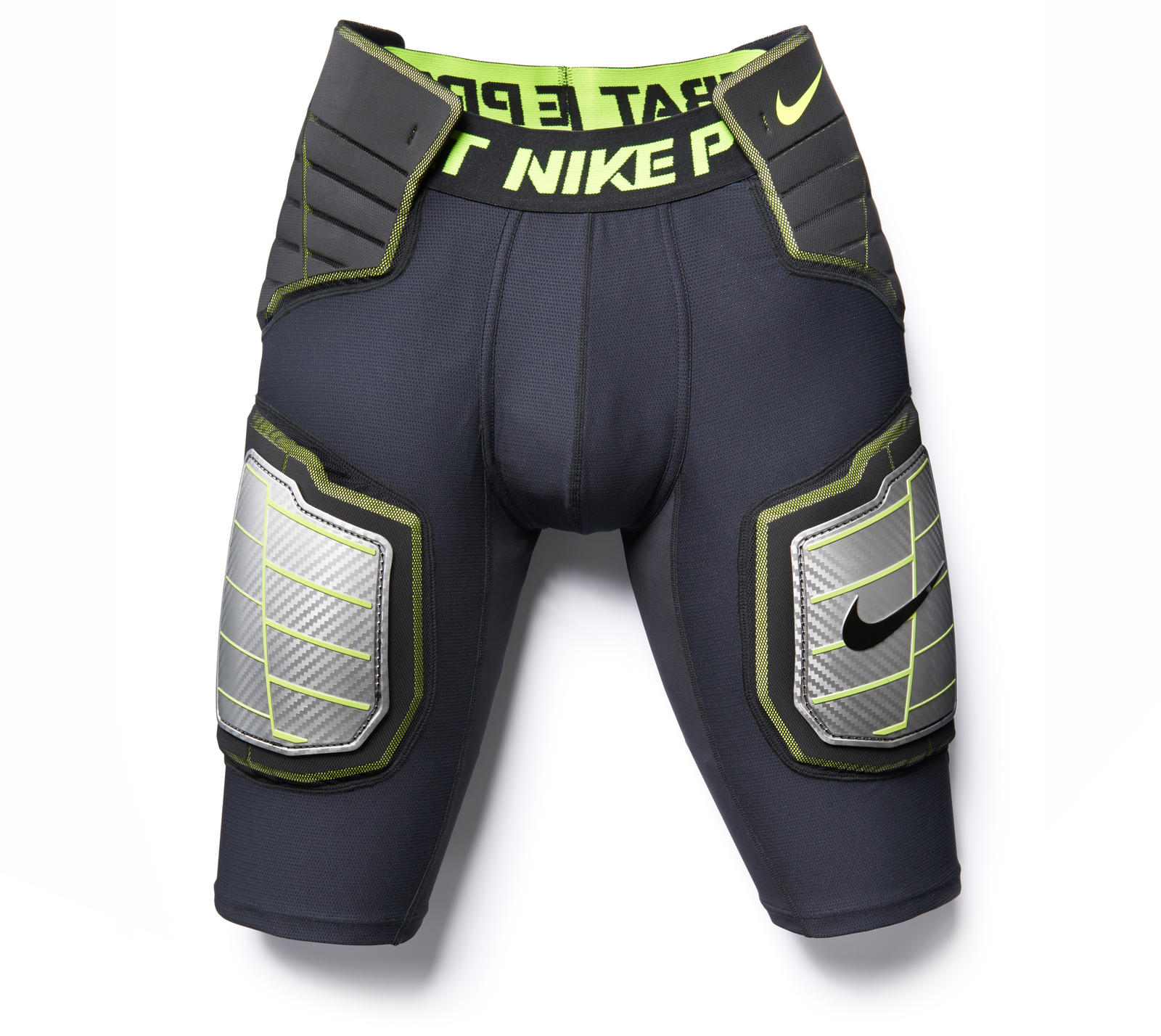 As the game of football evolves, athletes have gotten bigger, stronger and more athletic. An overall faster game means increased impact. To that end, Nike re-engineered padding, introducing the “fast and flexible” Nike Pro Combat Hyperstrong 3.0 baselayer in 2010. Part of a system-of-dress that starts from the inside, the Nike Pro Combat Hyperstrong 3.0 baselayer incorporates padding, reducing the need for slip-in pads, and maximizing effectiveness. The baselayer top and bottom work in concert with the jersey and pants, allowing the full uniform to function as a natural extension of the body. 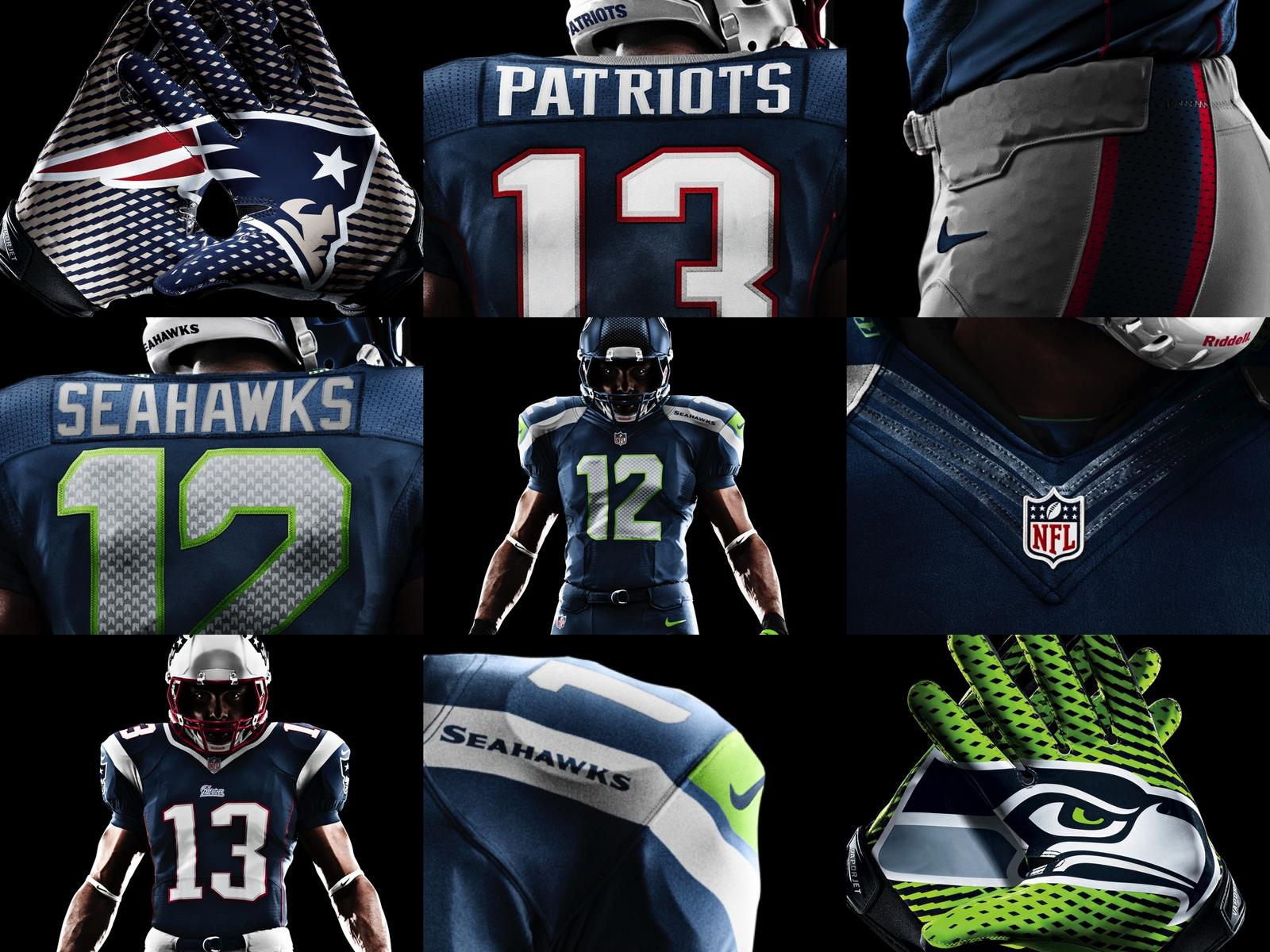 The Nike Elite 51 Uniform was unveiled for pro players in 2012 with the announcement of the Nike-NFL partnership. Nike became the League’s official on-field supplier for uniforms, sideline apparel, practice wear and baselayer for all 32 teams.

This uniform is truly the next generation in superior lightweight performance delivering a fully integrated system of dress for athletes at the highest level. This uniquely engineered chassis and baselayer combination is rooted in body-led design. The uniform system has a contoured fit resulting in zero distractions in order to help amplify speed.  The defending champion Seattle Seahawks were the first team to adopt a full uniform redesign in 2012; followed by the Jacksonville Jaguars, Miami Dolphins and Minnesota Vikings in 2013; and the Tampa Bay Buccaneers in 2014. 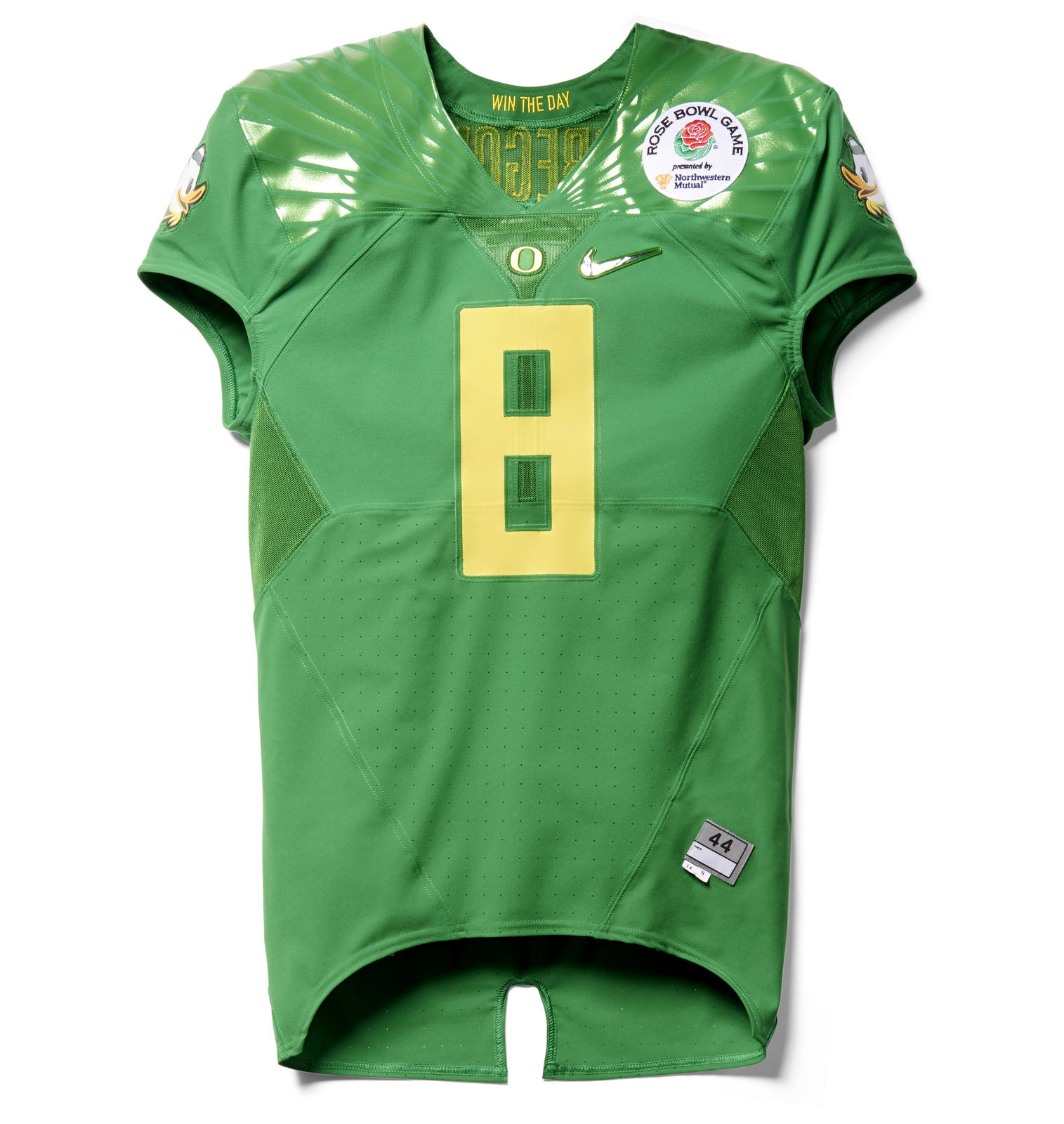 On Dec. 30, 2013, the University of Oregon debuted Nike’s most technically advanced football chassis, the Nike Mach Speed Uniform. Nike designers applied research and design learnings gleaned from the world’s fastest athletes across multiple sports to create an articulated fit that moves in sync with the body. Built for optimal thermoregulation, the Nike Mach Speed Uniform incorporates three distinct mesh fabrics. Each panel on the jersey and pant corresponds baselayer and Nike Pro Combat Hyperstrong underneath, maximizing both airflow and mobility.

The Nike Mach Speed jersey advances the research originally begun with the Nike Batwing jersey, with an increased focus on movement. The combination of fabrics helps lock down pads and works seamlessly with the baselayer to complete the most sophisticated Nike Pro Combat system-of-dress to date.

Since the introduction of the Astrograbber, advancements in football footwear have been linked to insights from running shoe design. In 2013, Nike focused on the 40-yard dash — a metric commonly used by pro scouts to assess in-game speed — seeking to improve performance, especially propulsion from an athlete’s crucial first step. Partnering with bio-mechanists, coaches and gold-medal sprinter Michael Johnson, Nike designers pushed the limits of innovation and introduced the first 3-D printed plate.

Employed for the first time on the Nike Vapor Laser Talon, developed to provide optimal traction off the line, the plate represents an acceleration of technological and performance innovation. It also led to new ways of thinking about the relationship between traction and body positioning, leading to the creation of the game-changing Carbon V-Plate. Nike adapted the plate to support multi-directional explosiveness in the Nike Vapor Carbon 2014 Elite, which debuted last year. Taking more lessons from the track, a decoupled forefoot promotes natural motion from the medial to lateral side of the foot to support aggressive cuts on the turf. 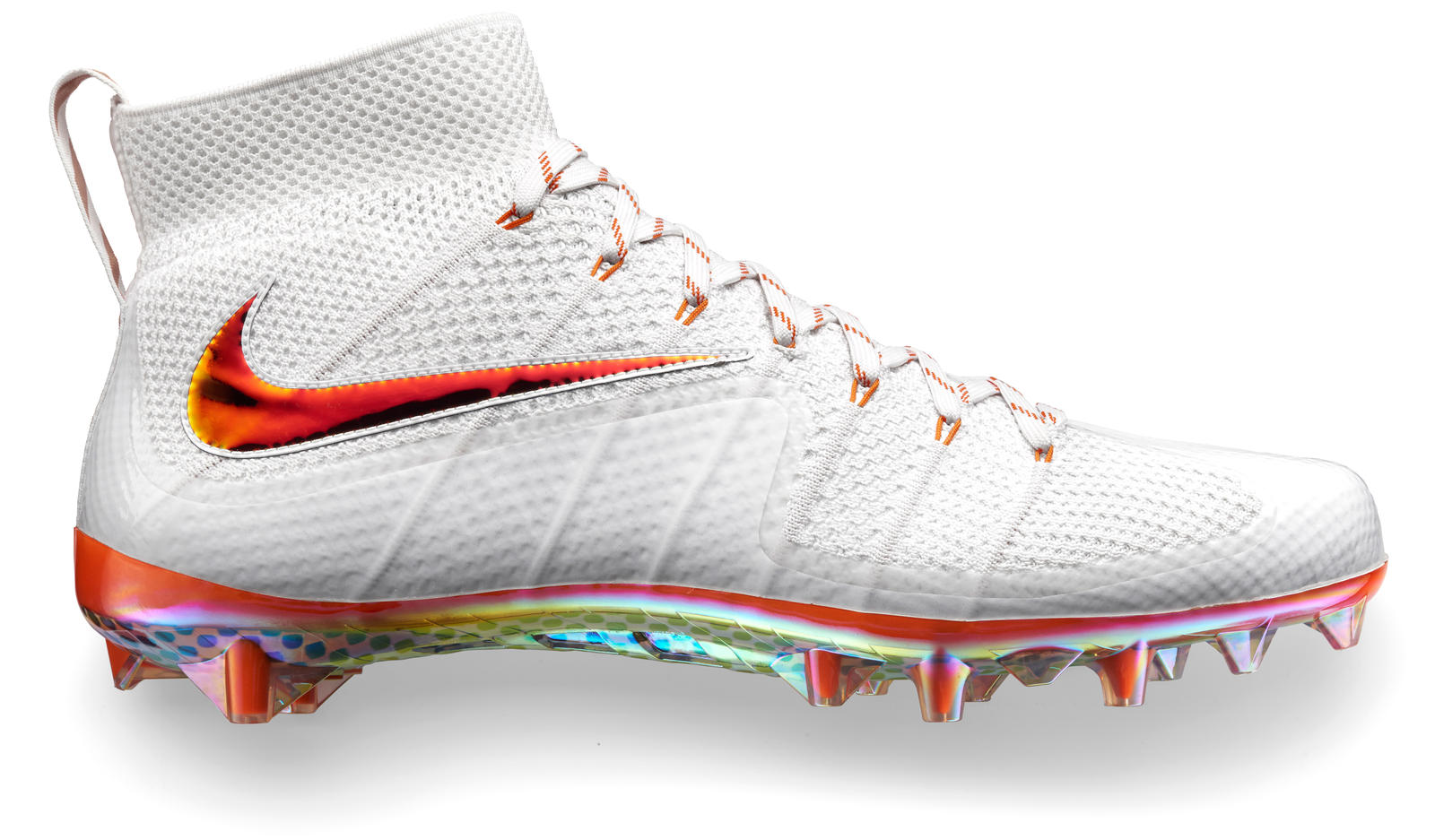 Launched during the first College Football Playoff, the Nike Vapor Untouchable cleat pushes the limits of speed on the field, extending the full system of dress all the way to the foot. The introduction of Nike Flyknit — debuted in Nike Flyknit Racer in 2012 — to Nike Football, allows a dynamic fit that advances the natural motion of the Carbon V-plate.

“Every piece of equipment needs be the best in its class,” says Todd Van Horne, Nike Football VP and Design Director. “But the real strength of Nike is integrating the whole system together, and that gives athletes better feel and performance.”

The Nike Vapor Untouchable represents Nike Football’s most progressive advancement in full head-to-toe solutions. In step with the Nike Vapor Knit Glove and the Nike Pro Combat uniform system, the cleat performs as an extension of the body.