How PeacePlayers Makes Us Think Differently About the Power of Sport 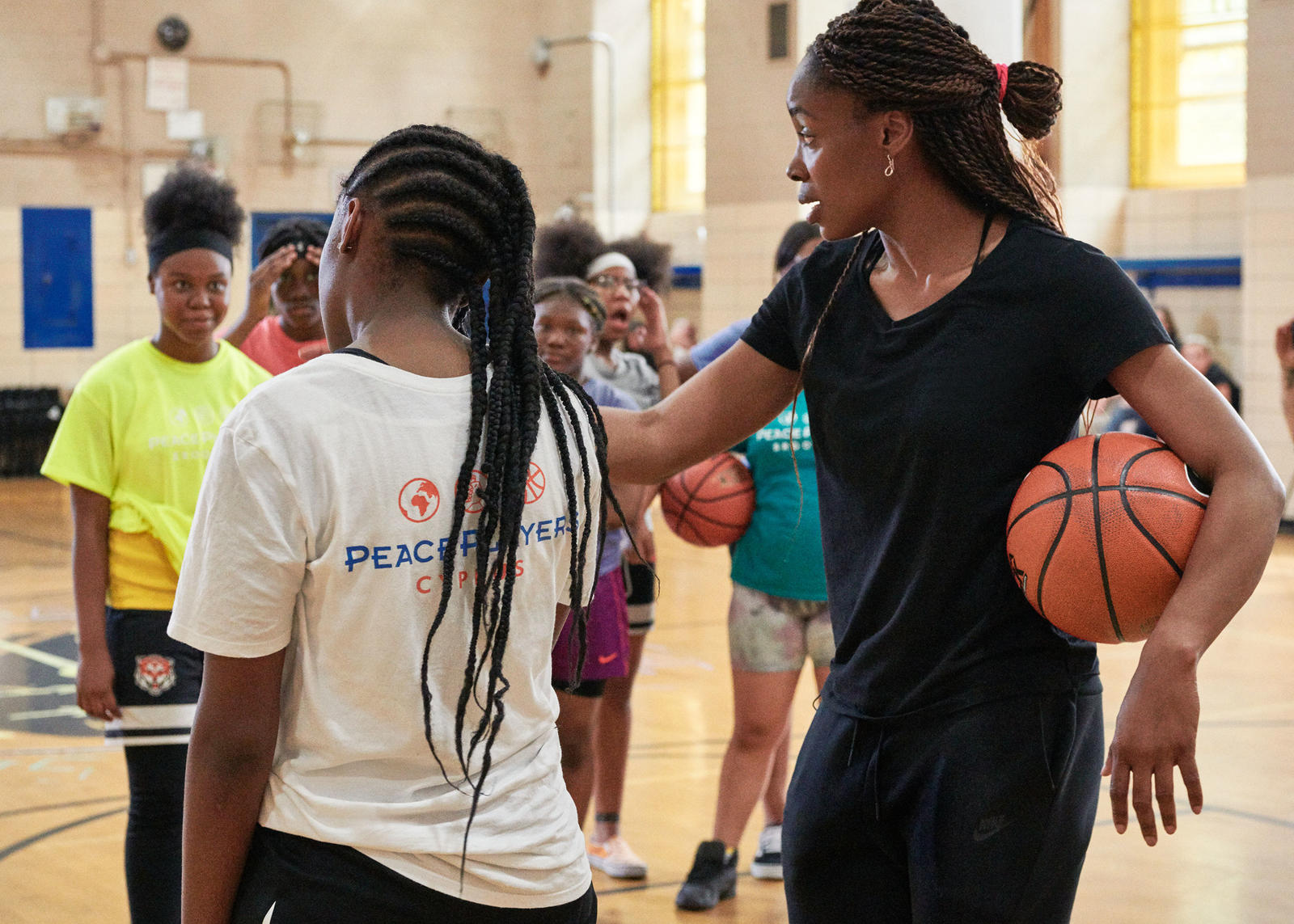 Sally Nnamani, a PeacePlayers coach and mentor in Brownsville, Brooklyn, instructs a group of young girls during a scrimmage.

A gym in Brownsville, Brooklyn, thrums with the dribbling of a full-court basketball game, the squeal of shoes everywhere. Two teams from divided housing projects are getting their first chance to interact with each other in a safe environment and with the help of a committed mentor and trained coach. As the coach calls the two groups in for a huddle, he asks a covert-seeming question: “Did anyone notice something different about that game?”

After a few seconds of silence, one player raises his hand, speaking in a hesitant tone posed almost as a question. “Nobody passed me the ball that whole game. It’s like everyone played keep-away from me.”

The coach nods his head. He confirms that, before the scrimmage, he had called the four other teammates together and told them to keep the ball away from the player. The coach asks him how being ignored made him feel — and suddenly the drill becomes a conduit for a conversation about exclusion.

Virtues such as persistence, courage and cooperation are hardwired into sports. But the relational lessons — practicing inclusivity, bridging differences between groups — are less widely discussed. These tenets are just as critical, and they're key components of the curriculum taught by PeacePlayers, an international organization that unites divided communities through basketball. Nike partnered with PeacePlayers in 2017, a joint commitment to widen opportunity to sport for kids in light of significant socioeconomic and cultural barriers across inner cities.

"At PeacePlayers, we're using sport to help young people see the humanity in each other so they can build a more peaceful world," says Brendan Tuohey, Co-founder and Executive Director of PeacePlayers. "Through our work in bridging divides, we're creating a global network of young leaders who are uniting and transforming their communities."

"At PeacePlayers, we're using sport to help young people see the humanity in each other so they can build a more peaceful world."

The alchemic effect of basketball has broad implications thanks to the thoughtful programming from PeacePlayers staff since its founding in South Africa in 2001. First and foremost is a belief in sport to build up community city by city, starting with the aforementioned programming in apartheid South Africa, continuing into addressing conflict in Northern Ireland and regions of the Middle East, and expanding overseas and into the heart of U.S. cities such as Baltimore, Chicago, Detroit, Los Angeles and New York City (specifically, Brooklyn's Brownsville). Through deliberate programming, teams from opposite sides of broken neighborhoods are brought together to participate in drills and games, all while learning to see the “other” as people with intrinsic value. The efforts are driven by local staff and coaches who reflect the youth of the communities they serve.

Second is the belief in sport as a conduit to a better self, a vivifying aim of the curriculum’s leadership development program. Players who possess exceptional character are mentored and given opportunities to volunteer in their communities, and even assume leadership roles within the organization. The intention is to develop youth as leaders who are equipped through peace-building education and interpersonal skill development.

Third, the development style advocated by PeacePlayers is created to serve players off the court for the rest of their lives. This is done in a safe place with accessible mentorship and quality relationships with other kids, which can feel counter to the hypercompetitive scene of youth sports. The focus is not on elite development (though there are certainly opportunities for talented players to compete), and the destination is not to far-flung tournaments in front of scouts (although some players do have the chance to travel overseas to play in the organization's premier tournament, the Friendship Games). Instead, the goal is to find interpersonal lessons in recreation and to create an environment where all are welcome. In PeacePlayers, success isn't limited to stuffing the stat sheet.

It’s a point that Sally Nnamani reiterates. Formerly a fellow in the Northern Ireland region, the coach now leads PeacePlayers programming in Brooklyn, which has neighborhoods, like Brownsville, with some of the highest crime and poverty rates in New York City. Nnamani was a former collegiate player herself, and she’s quick to praise the character development opportunities in sport, regardless of qualifiers like gender or age.

“Playing sports made me tap into an inner strength,” says Nnamani. “I get this confidence that I don’t get from anything else. When I’m on the basketball court and I’m playing with a bunch of guys, I really believe that I can hang.”

She repeats that PeacePlayers is an environment for every kind of player, whether they began playing yesterday or played for years. According to Nnamani, every player has a home in the program.

Hear from Sally About her Work in Brownsville