In 2017, when Nike and the NBA announced its City Edition uniform concept, the goal was to breathe new life into uniform designs to more closely connect a franchise to its city. Now in its fourth season, City Edition uniforms are still rooted in that bespoke expression. Some designs have evolved, while others have stayed true to their original themes. The fluid fidelity to a city's culture also tells the story of fandom: through changes, shifts and even surprises, a fan base isn't specific to just one dimension, but many. A place can change over time while still preserving its regional spirit.

“City Edition uniforms were intended to be windows into a city’s culture,” says Sonja Henning, Nike VP, North America League Partnerships. “Representing the last four years, the fingerprint that City Edition describes — that unmistakable identity of a place — is dynamic, and it expands beyond basketball.”

Check out how City Edition uniforms have changed over time. 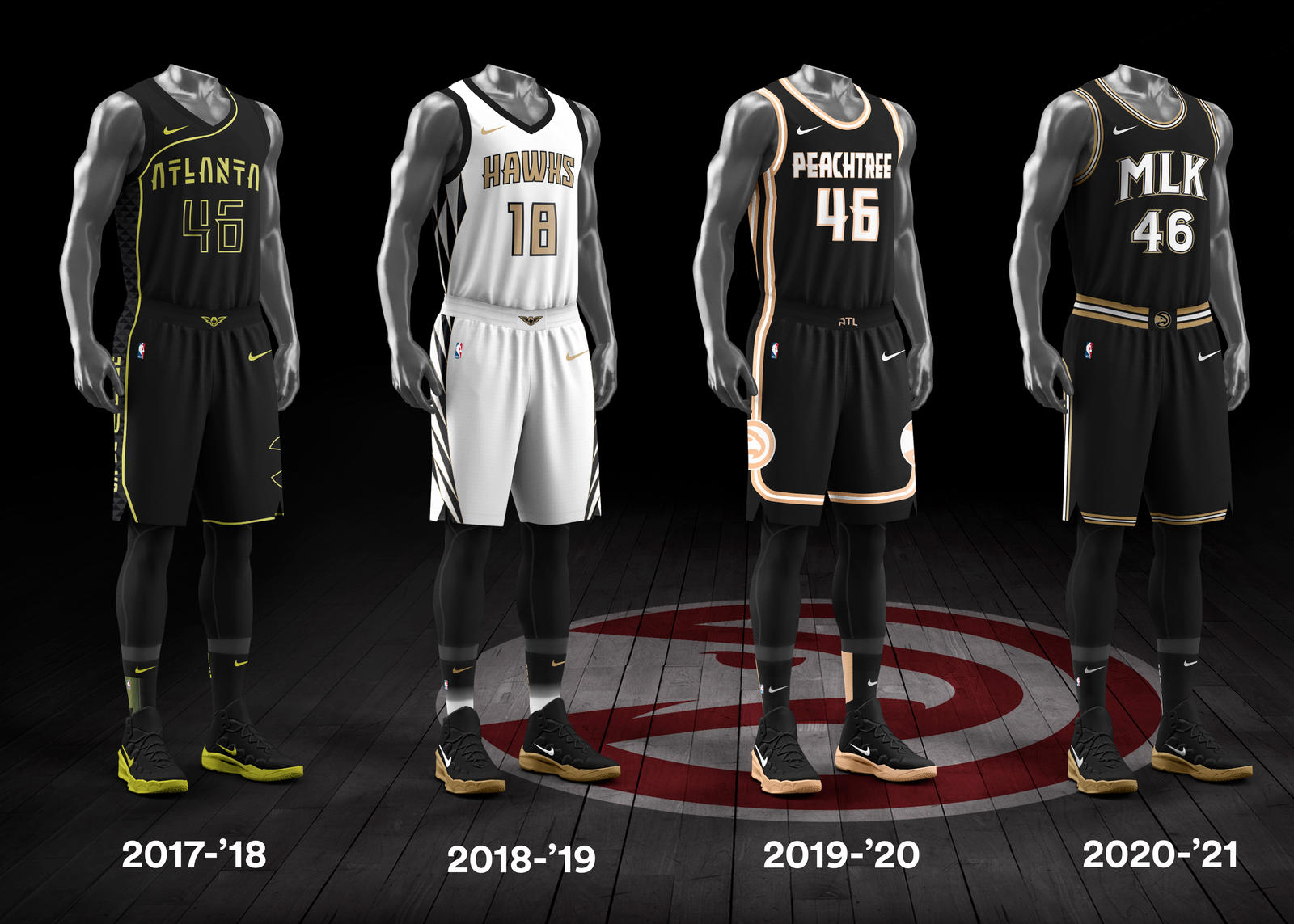 For 2020-21: Insignia inspired by the late Dr. Martin Luther King Jr.’s attire complements the windowpane side-paneling along the shorts, and symbolizes the reverend’s spiritual beginnings in Atlanta. 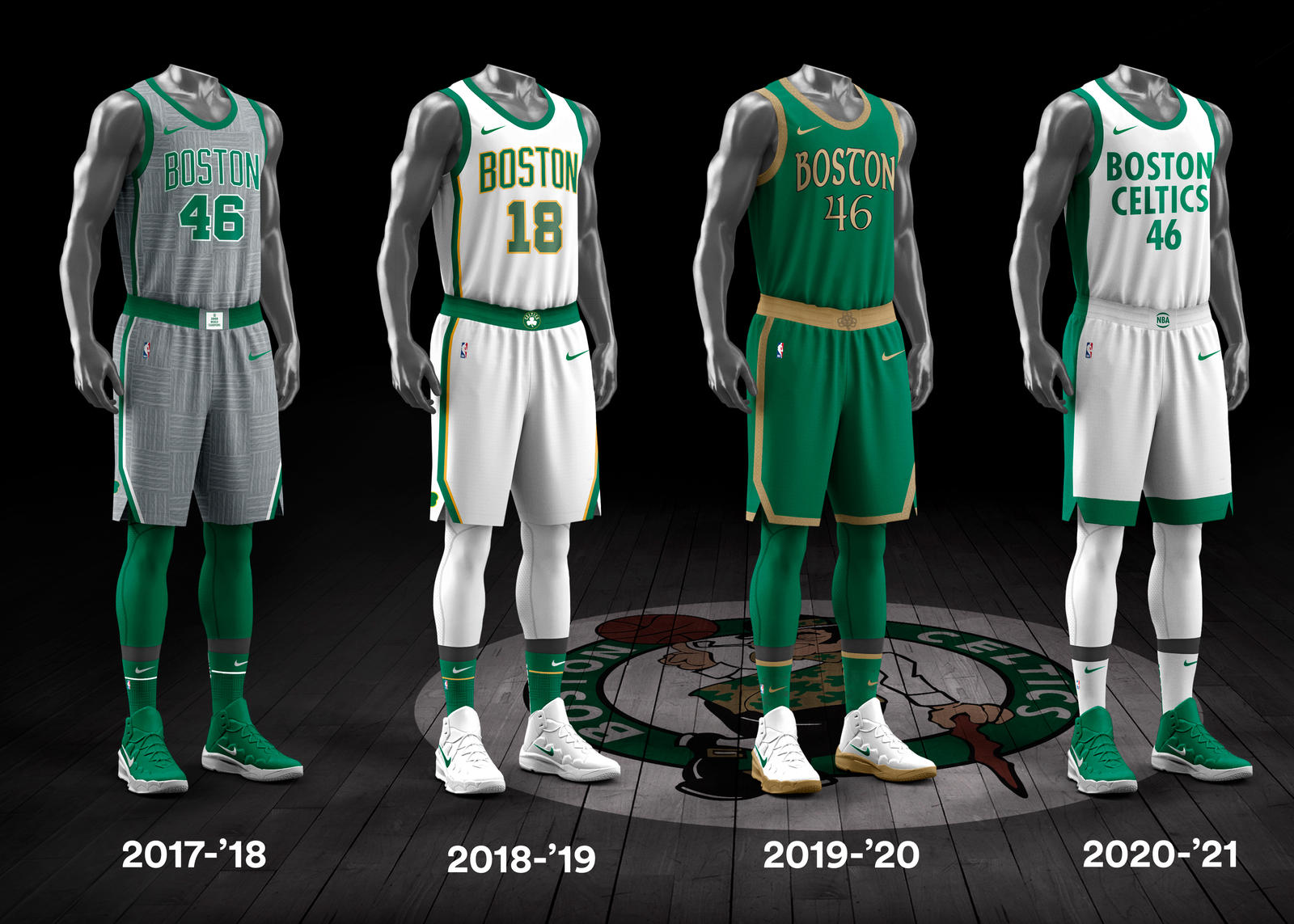 For 2020-21: Boston’s wordmark alludes to the banner that hangs above the team’s practice court in the Auerbach Center. 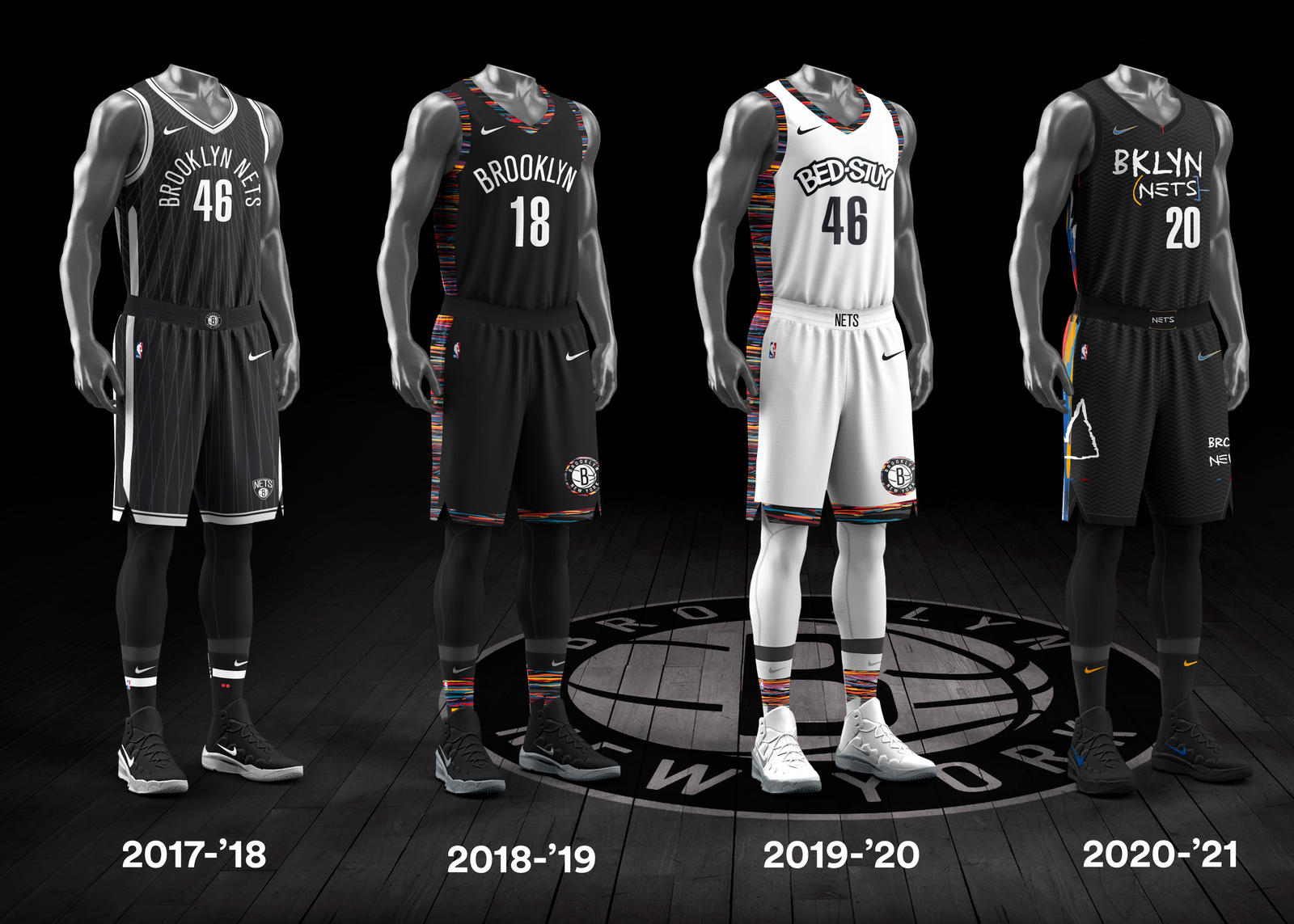 For 2020-21: The uniform features the late NYC artist Jean-Michel Basquiat’s signature type, his distinct artistic style and his recognizable crown. 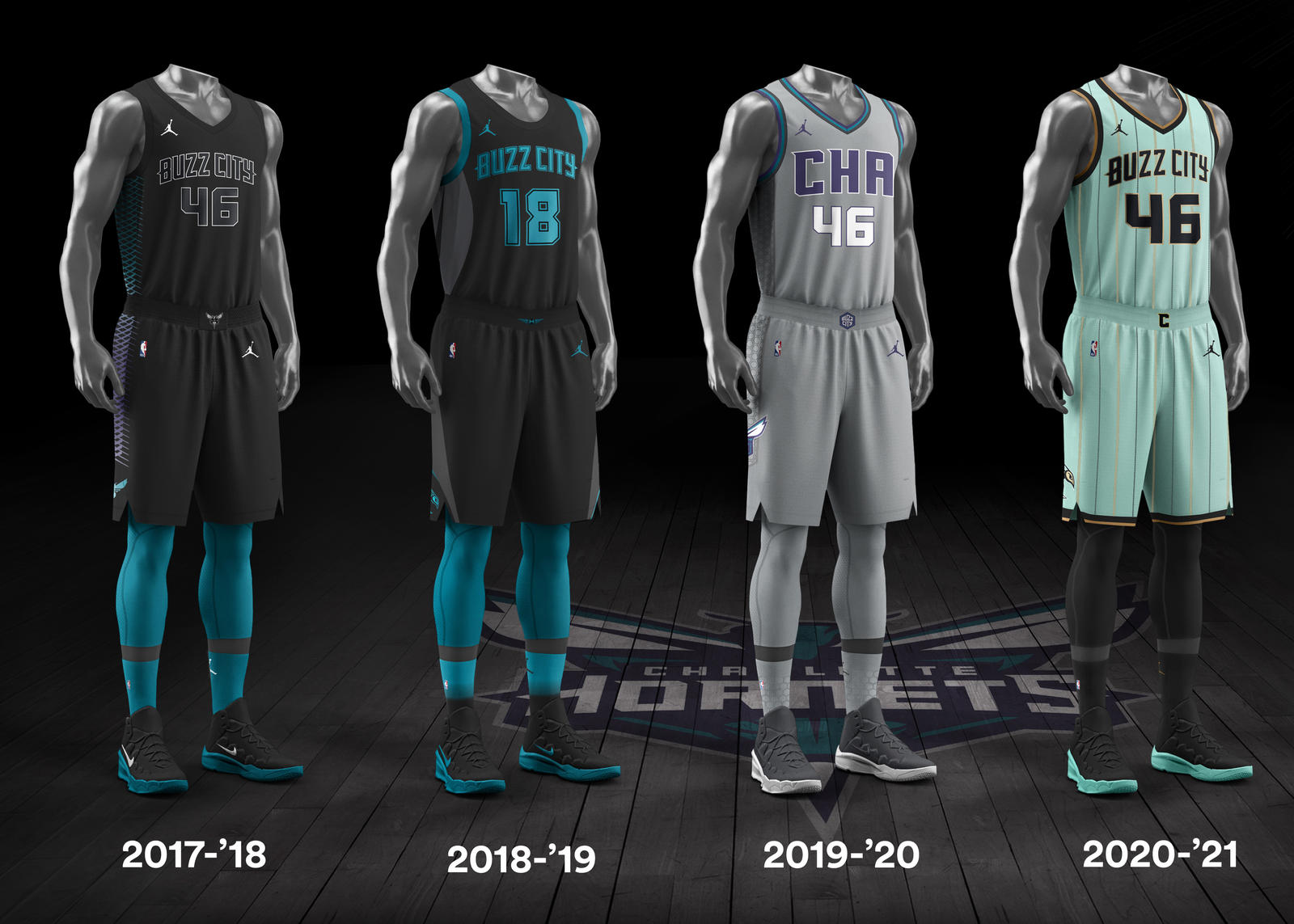 For 2020-21: Recognizing Charlotte’s history as home of the first U.S. Brand Mint and the Carolina Gold Rush, pinstripes in gold and granite and a mint base set the backdrop for the moniker “Buzz City” returning across the chest. 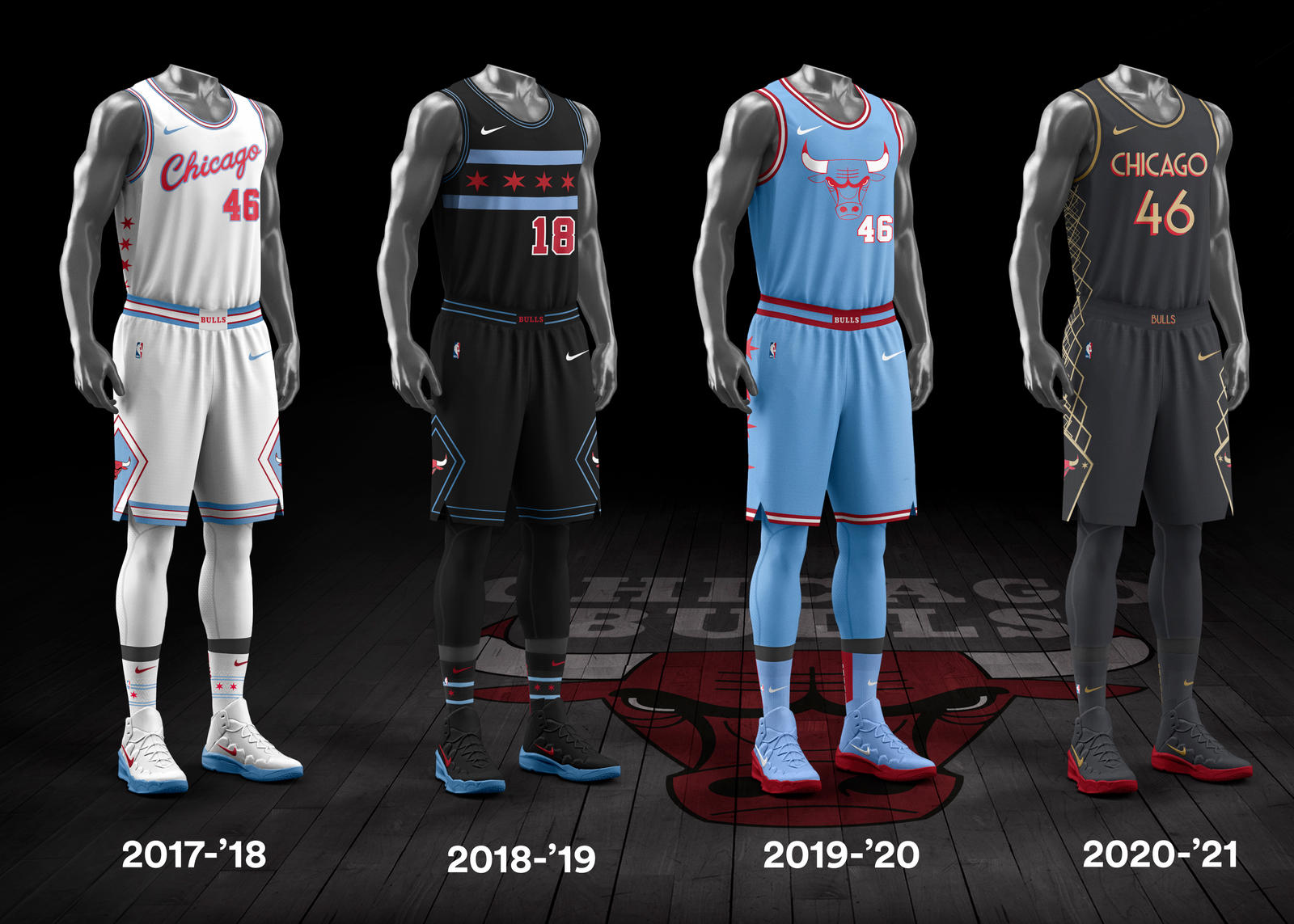 For 2020-21: The features are inspired by Chicago’s skyscrapers, with lettering and patterns arranged in art-deco designs. 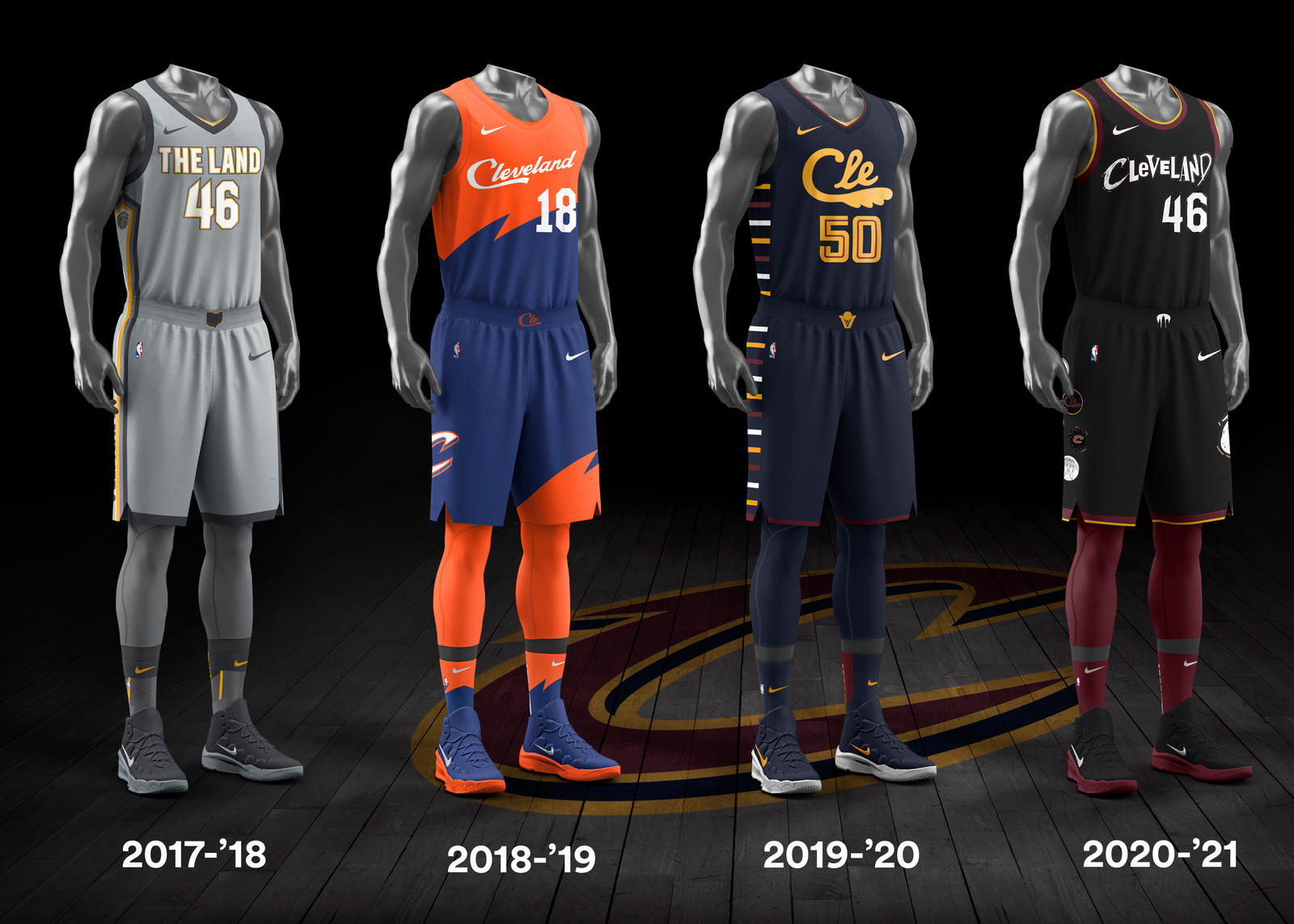 For 2020-21: Stitch-like elements across the chest and patch-inspired details on the shorts call to Cleveland’s place in music history. 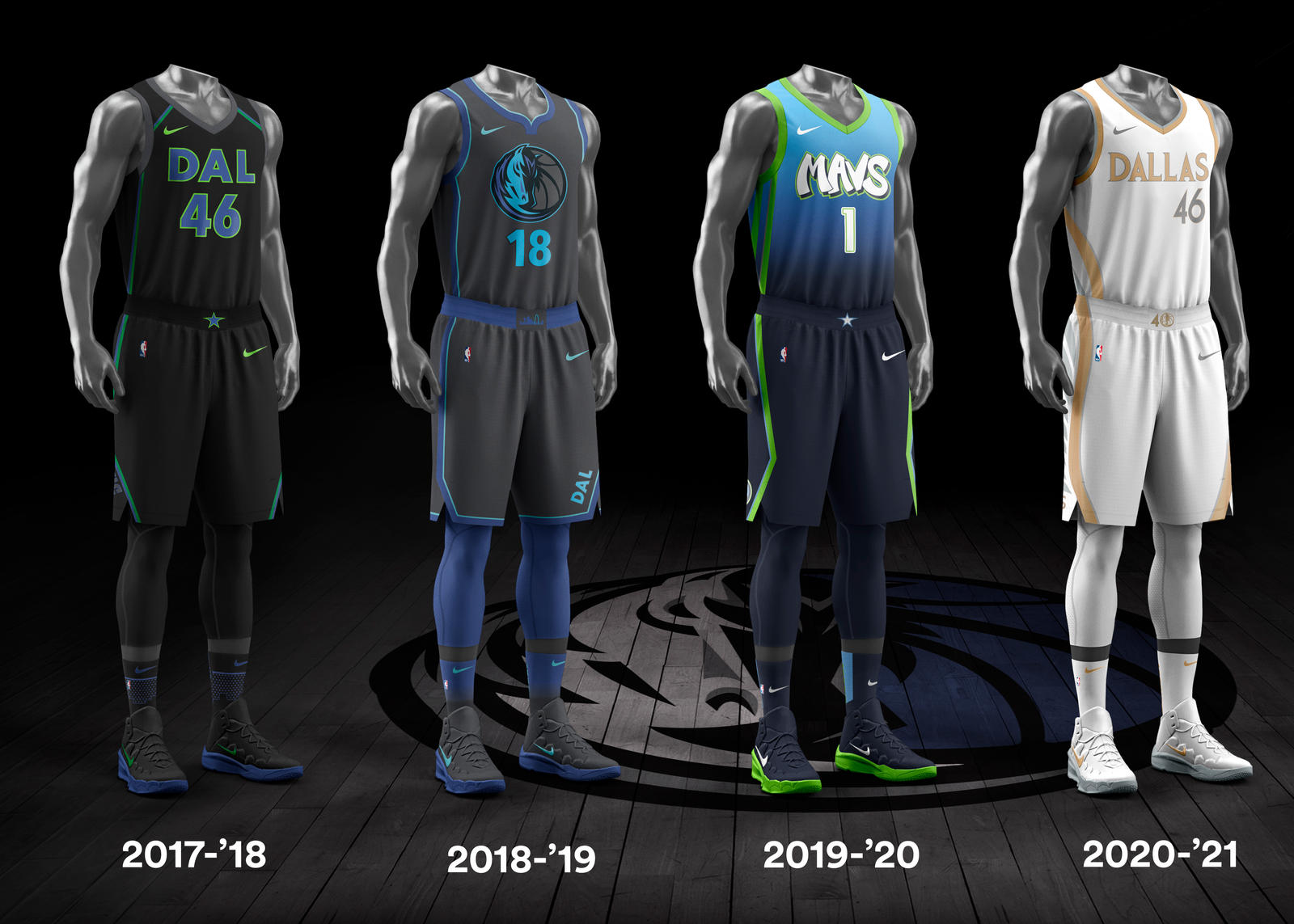 For 2020-21: The shades of silver and gold with angelic feathering invoke the rallying power of the Pegasus, which has watched over the city of Dallas for nearly 100 years. 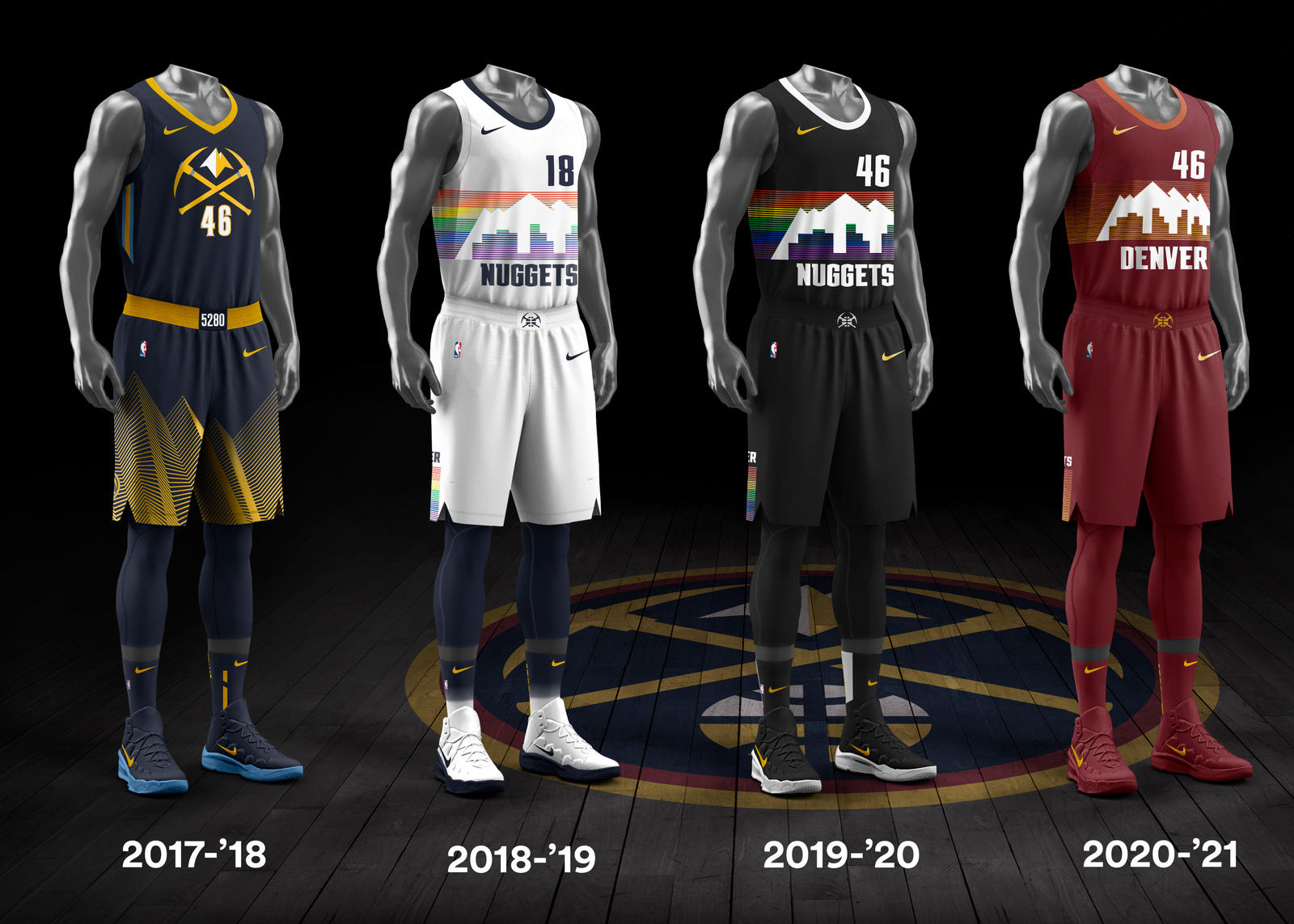 For 2020-21: Tints of red, maroon, burnt orange and gold blend together and compose the city's horizon line set against the Rocky Mountains. 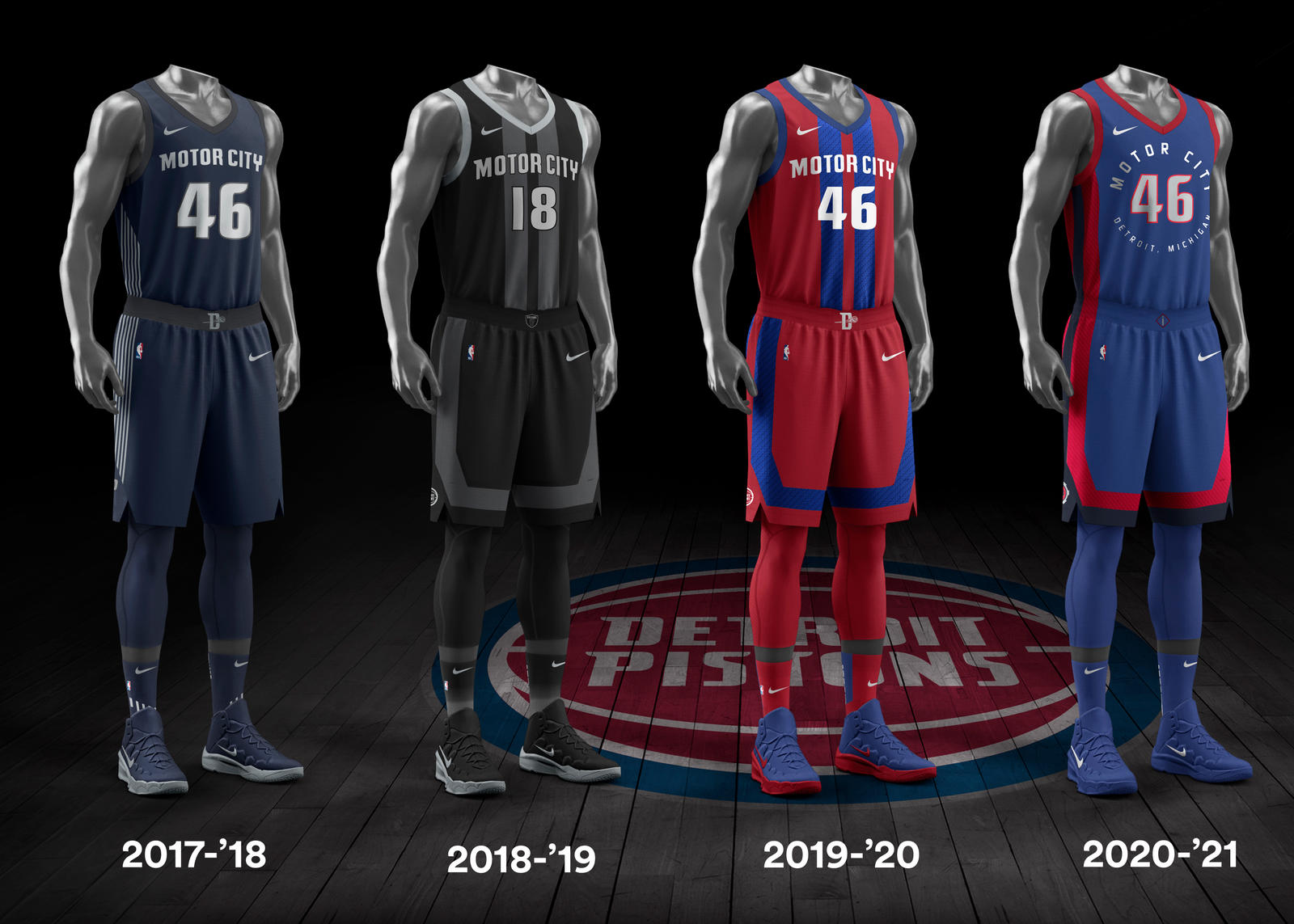 For 2020-21: A decal-inspired Motor City insignia on the chest points back to Detroit’s automotive history. 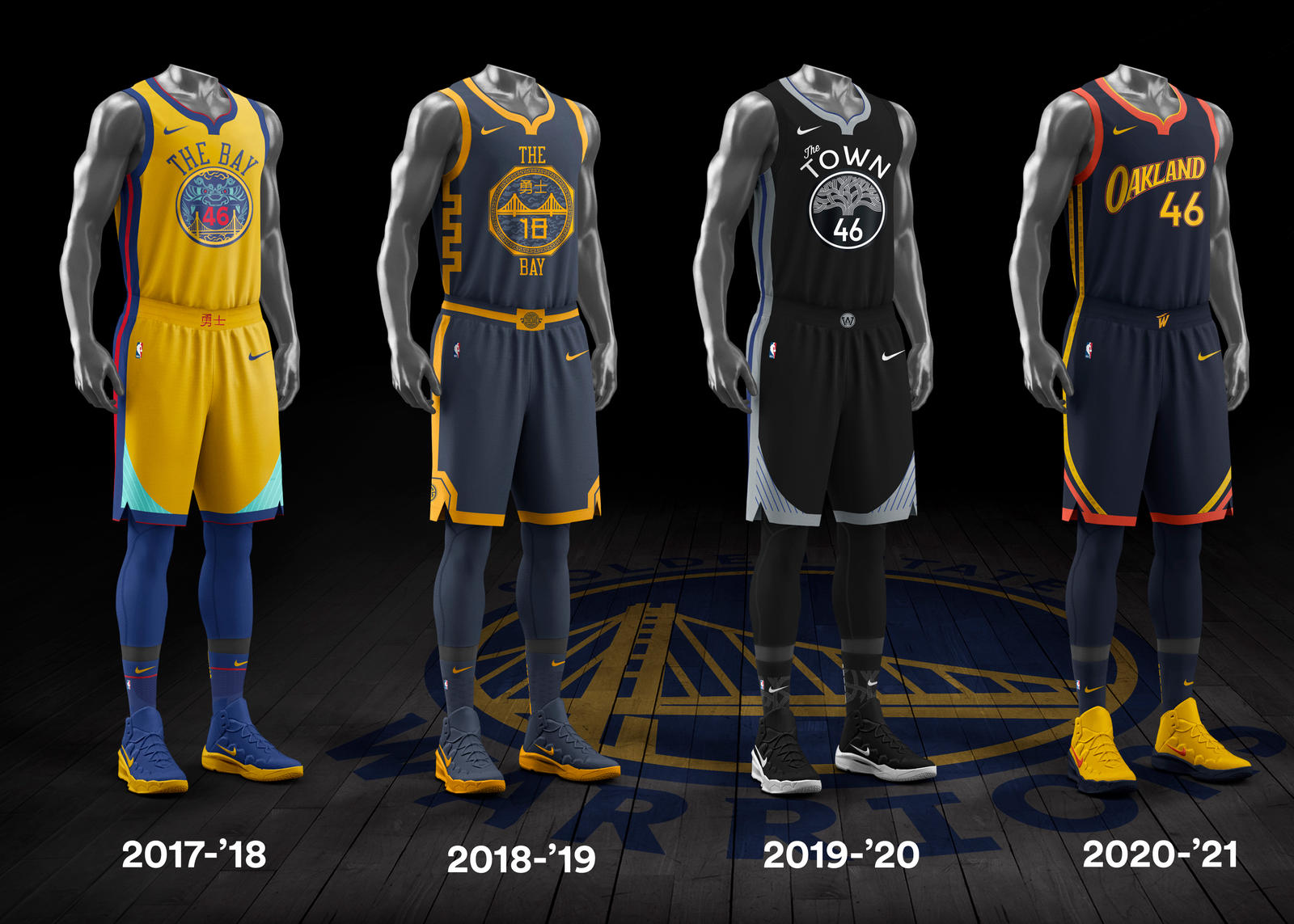 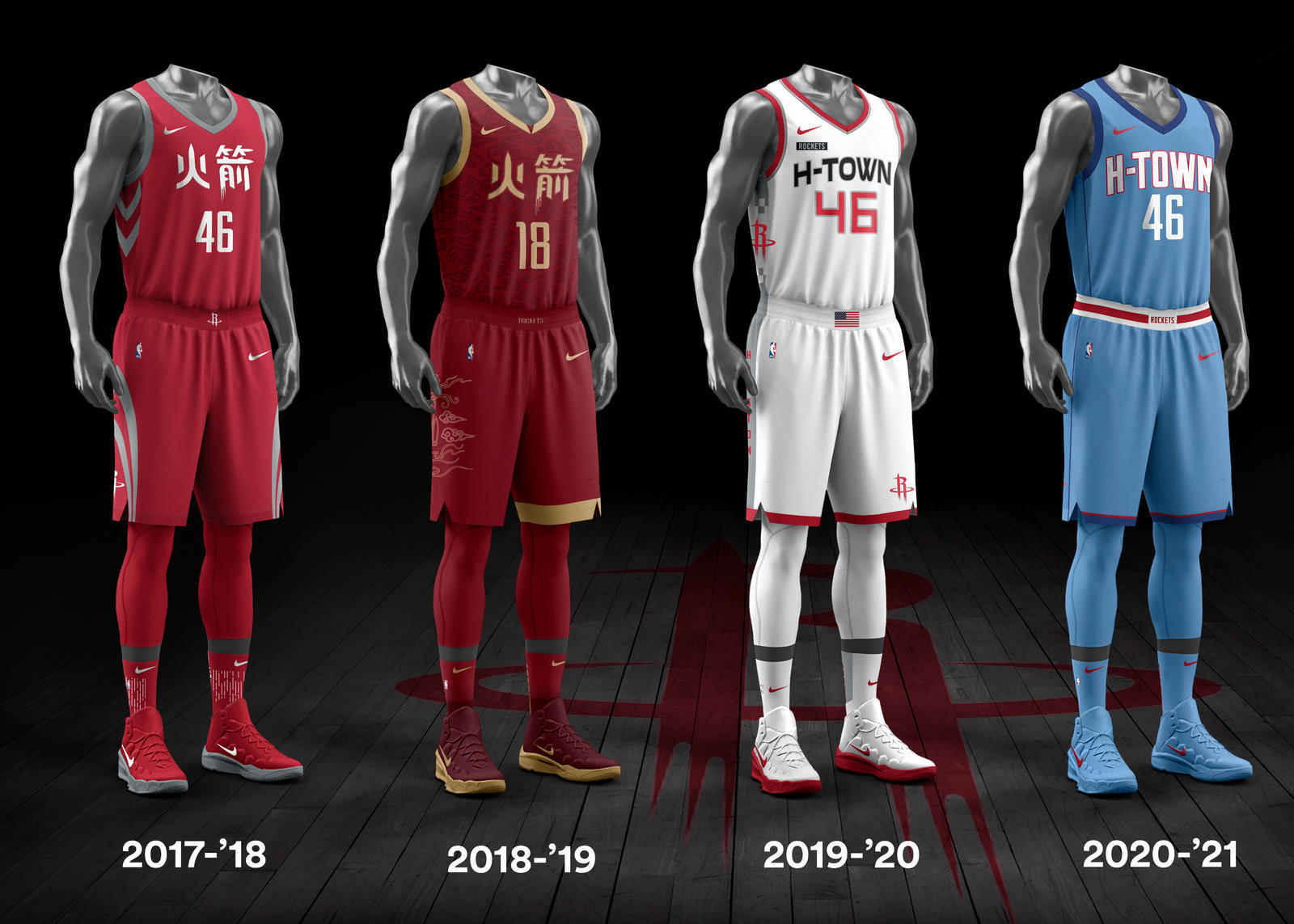 For 2020-21: “H-Town” branding appears once more on the chest, while setting its base in a soft, gulf-water blue. 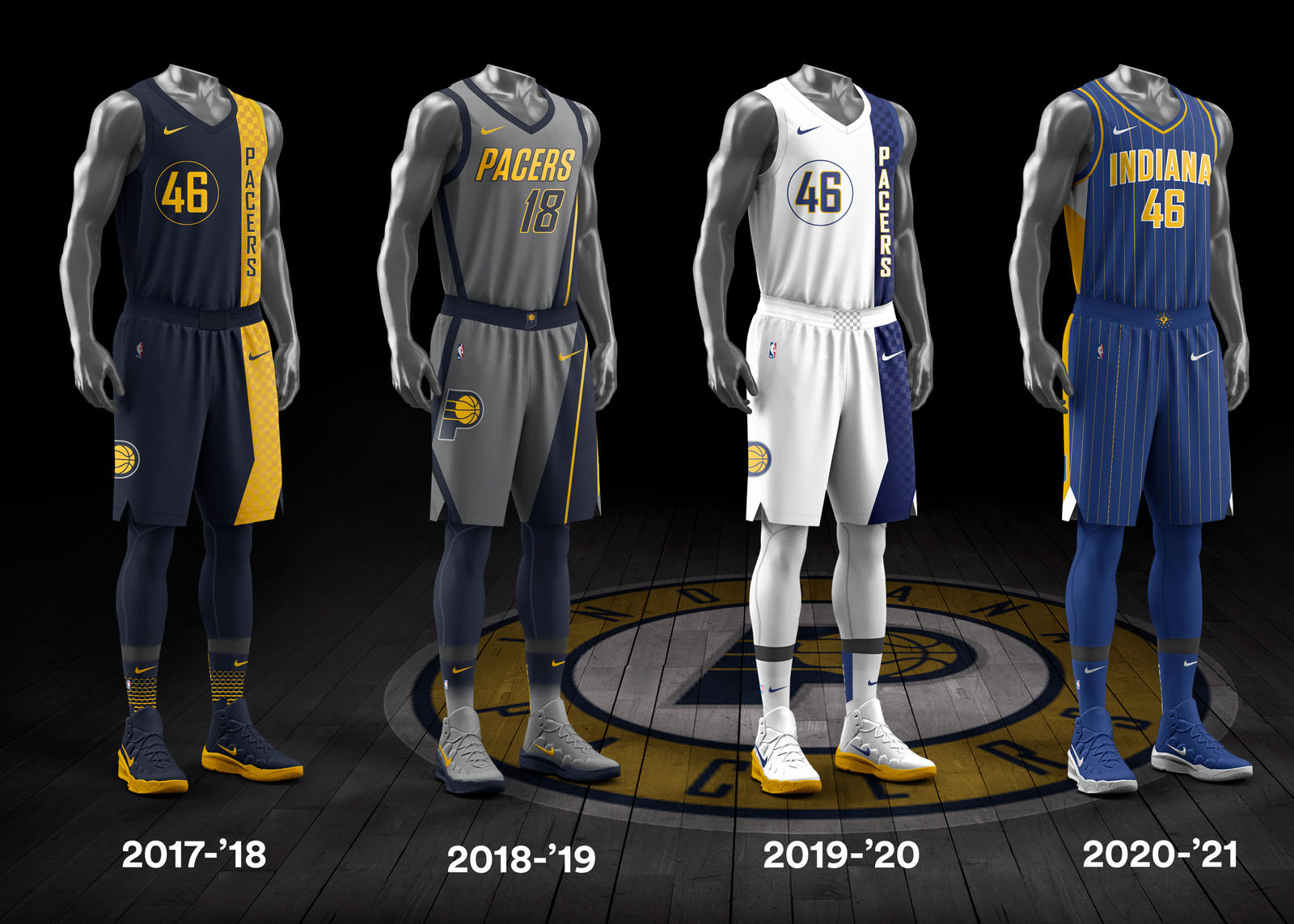 For 2020-21: Design elements of the Indiana state flag appear on the waistband, and pinstripes return for the first time since 2013. 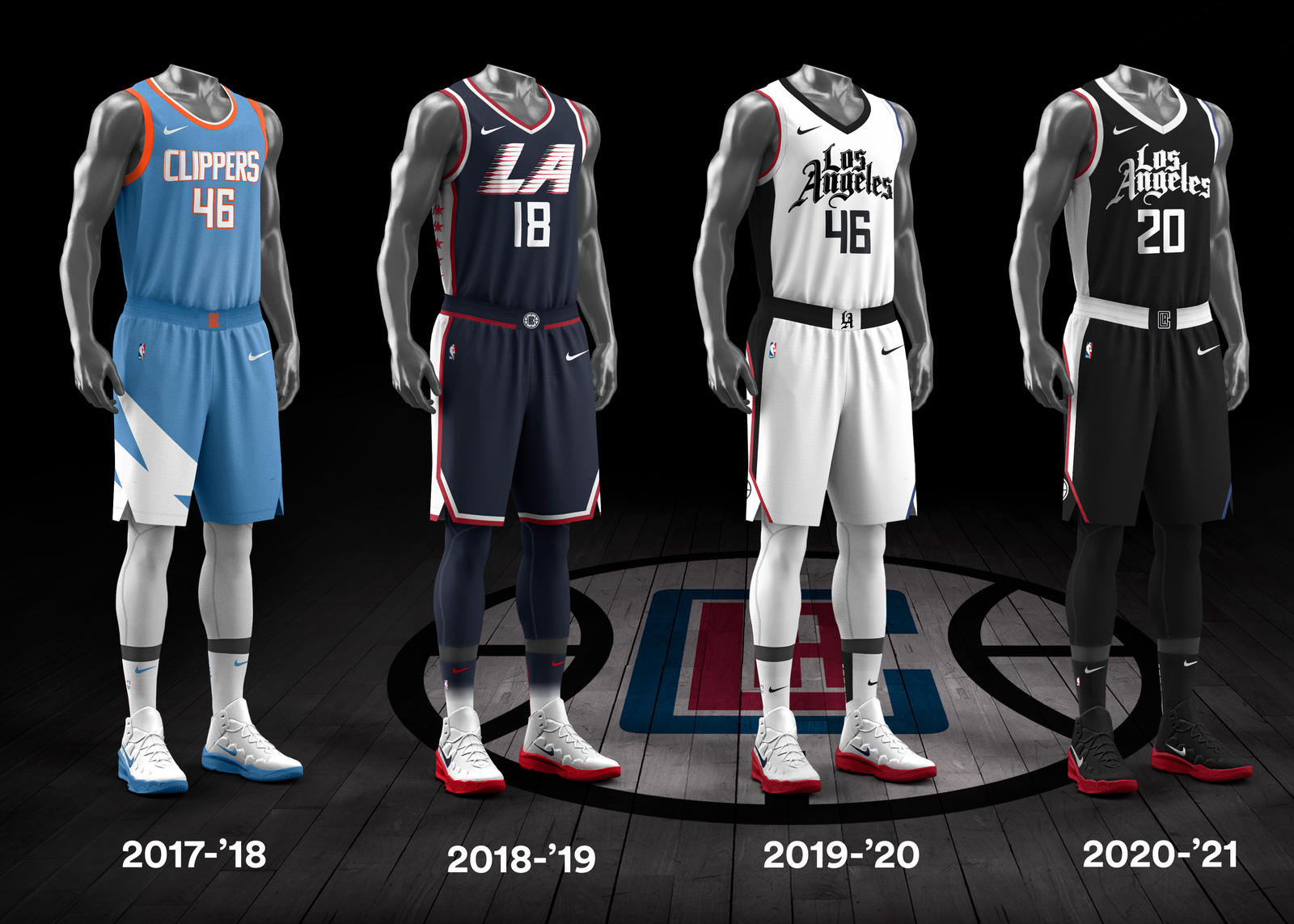 For 2020-21: The tattoo-inspired “Los Angeles” wordmark is back, this time over a black base. 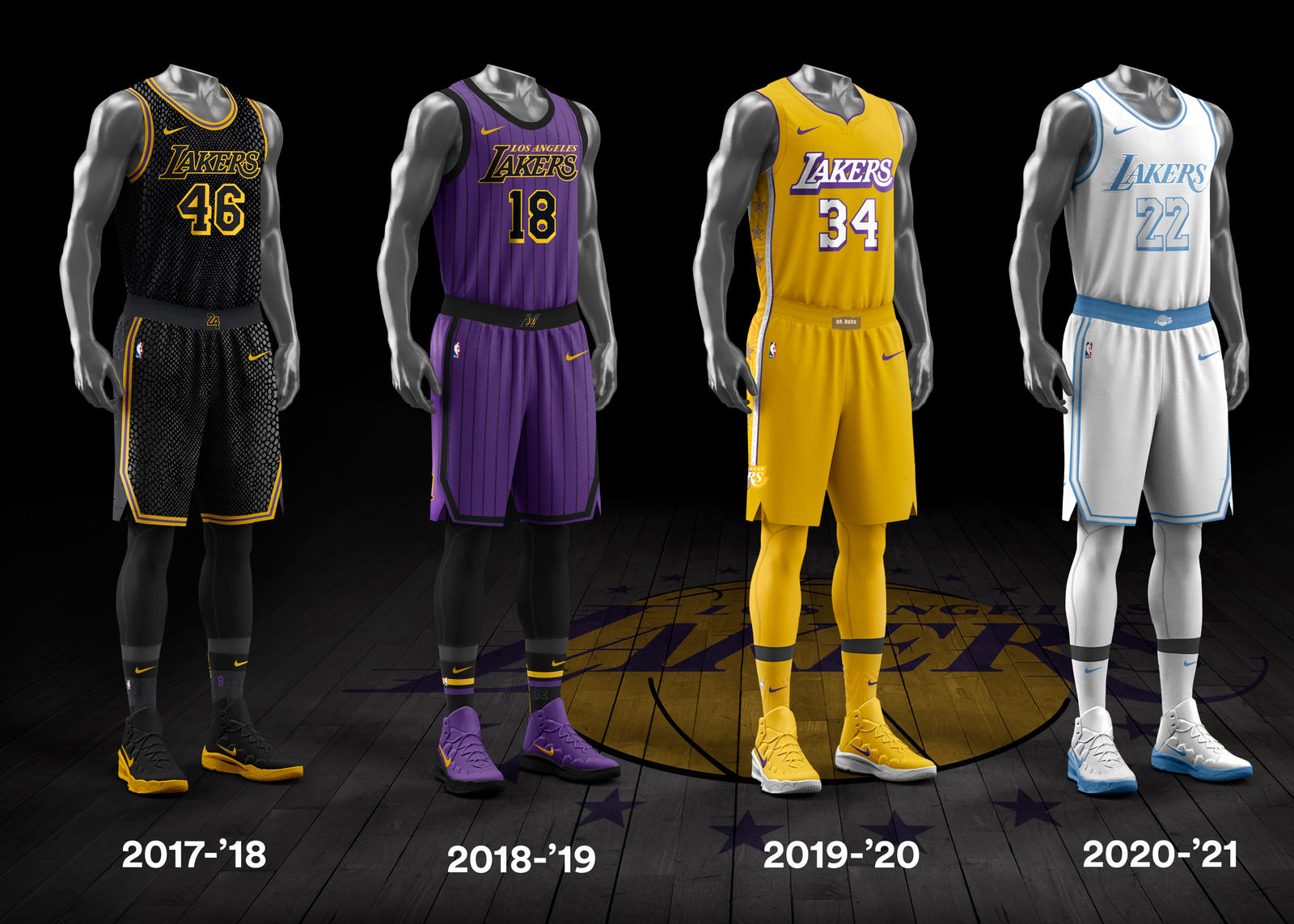 For 2020-21: Honoring Elgin Baylor as part of its Lore Series, the uniform adopts the ’60s baby-blue color scheme from the franchise's early days. 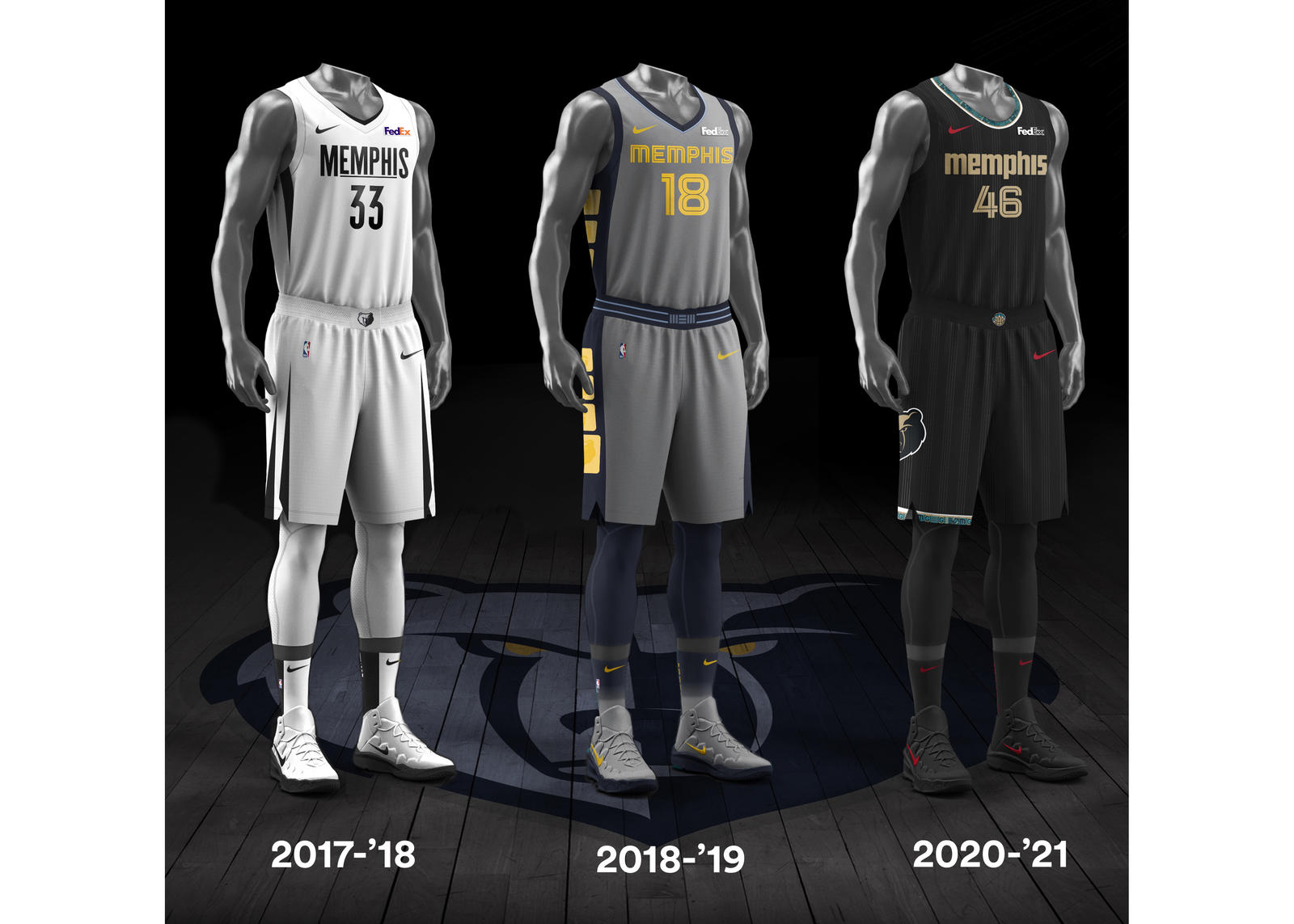 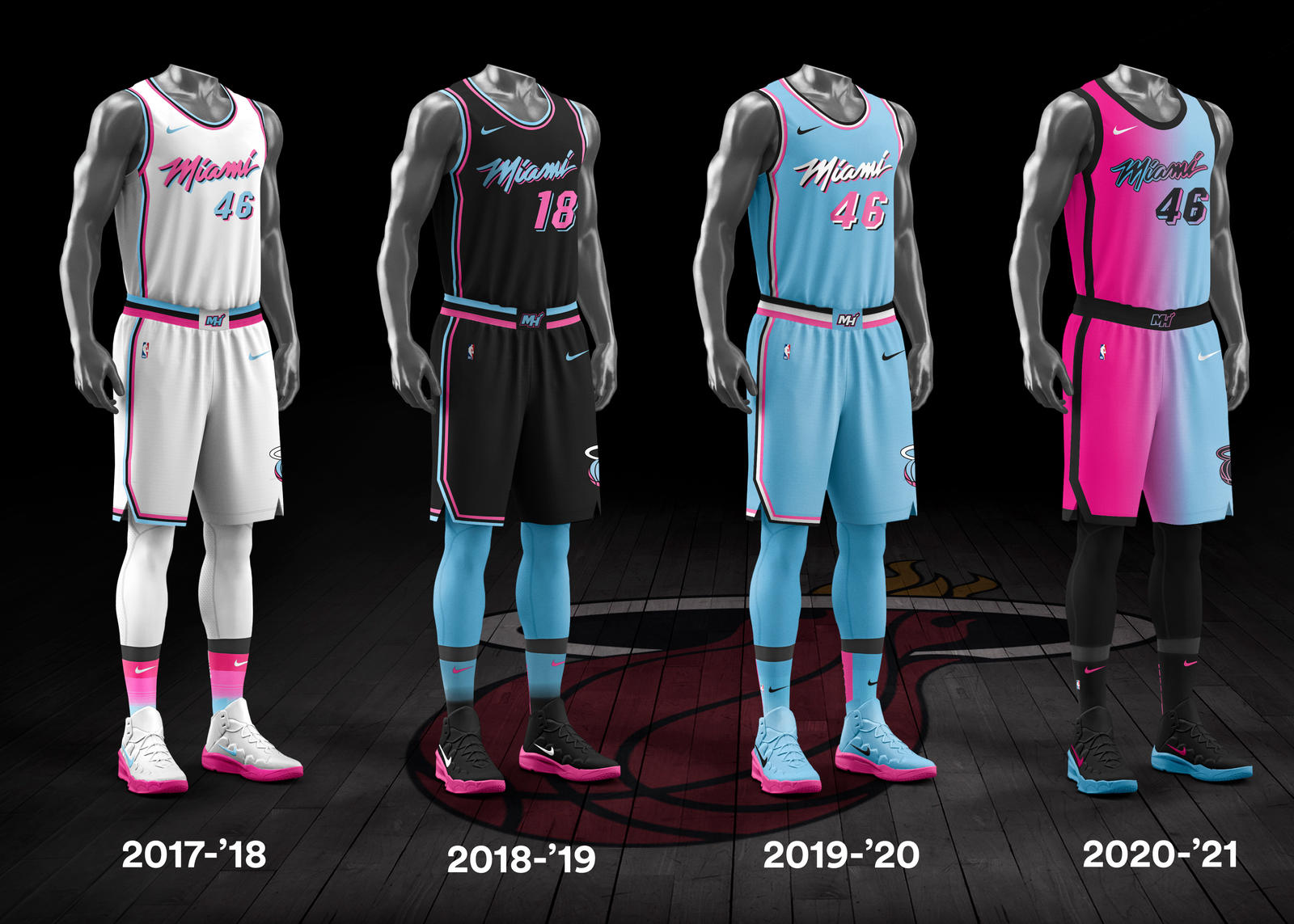 For 2020-21:  A horizontal gradient that blends fuchsia and blue evolves the team's popular Miami Vice concept. 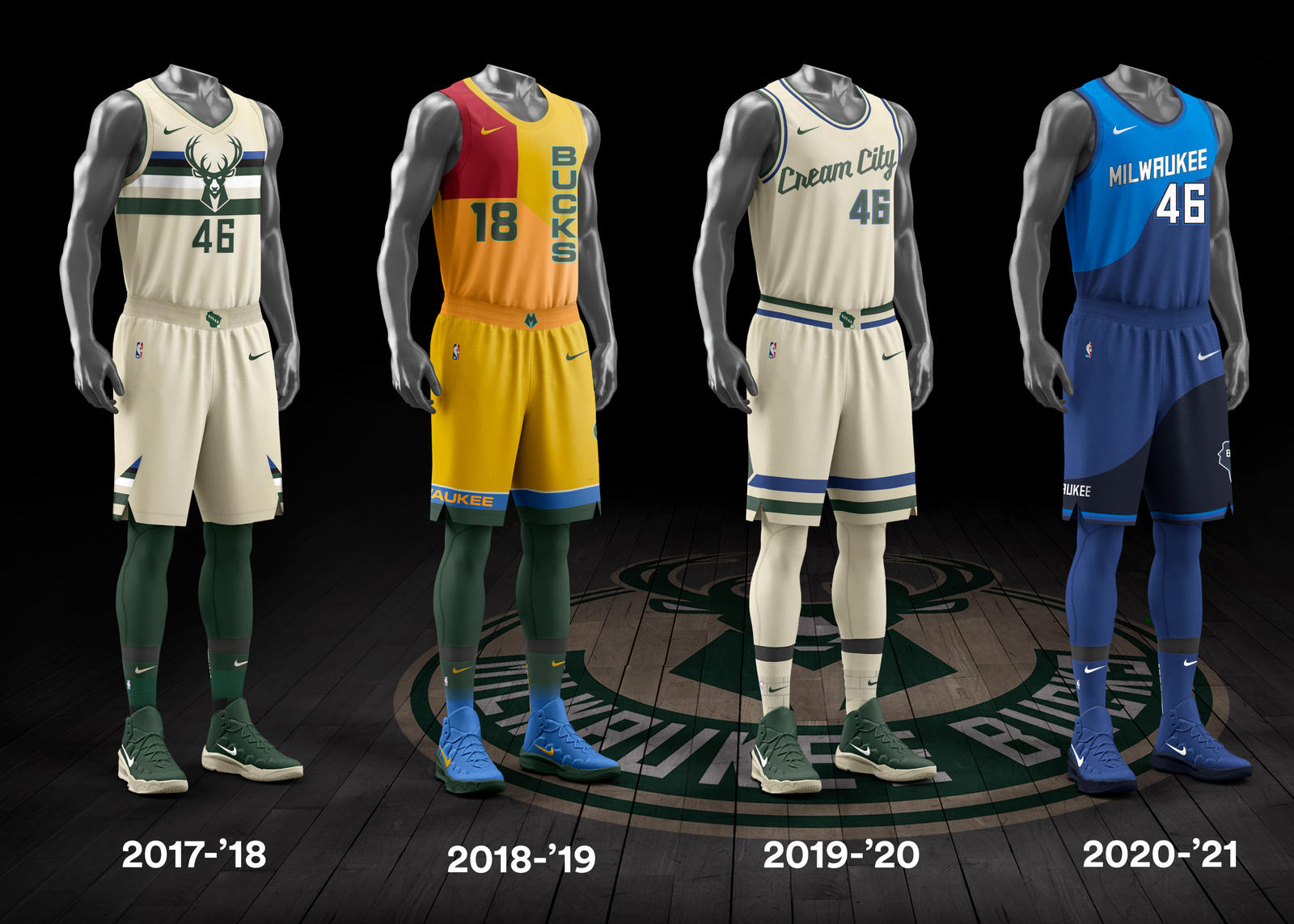 For 2020-21: The blue palette channels the three local rivers that run through Milwaukee into Lake Michigan. 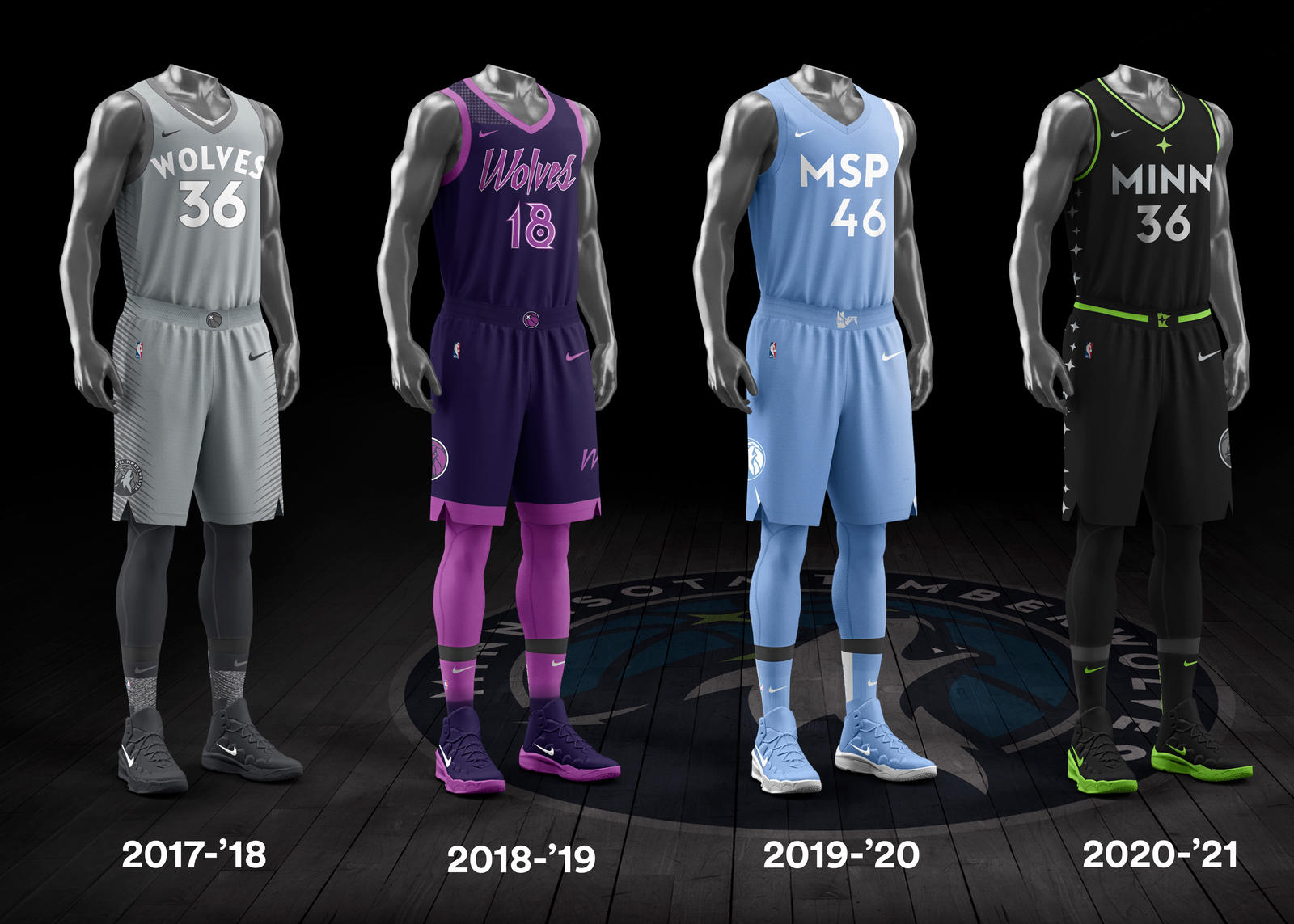 For 2020-21: The collection of stars, running along the right side panel of the uniform, represents the connection amongst people in Minnesota. The Aurora green trim is symbolic of the vibrant hue that shines by way of the Aurora Borealis. 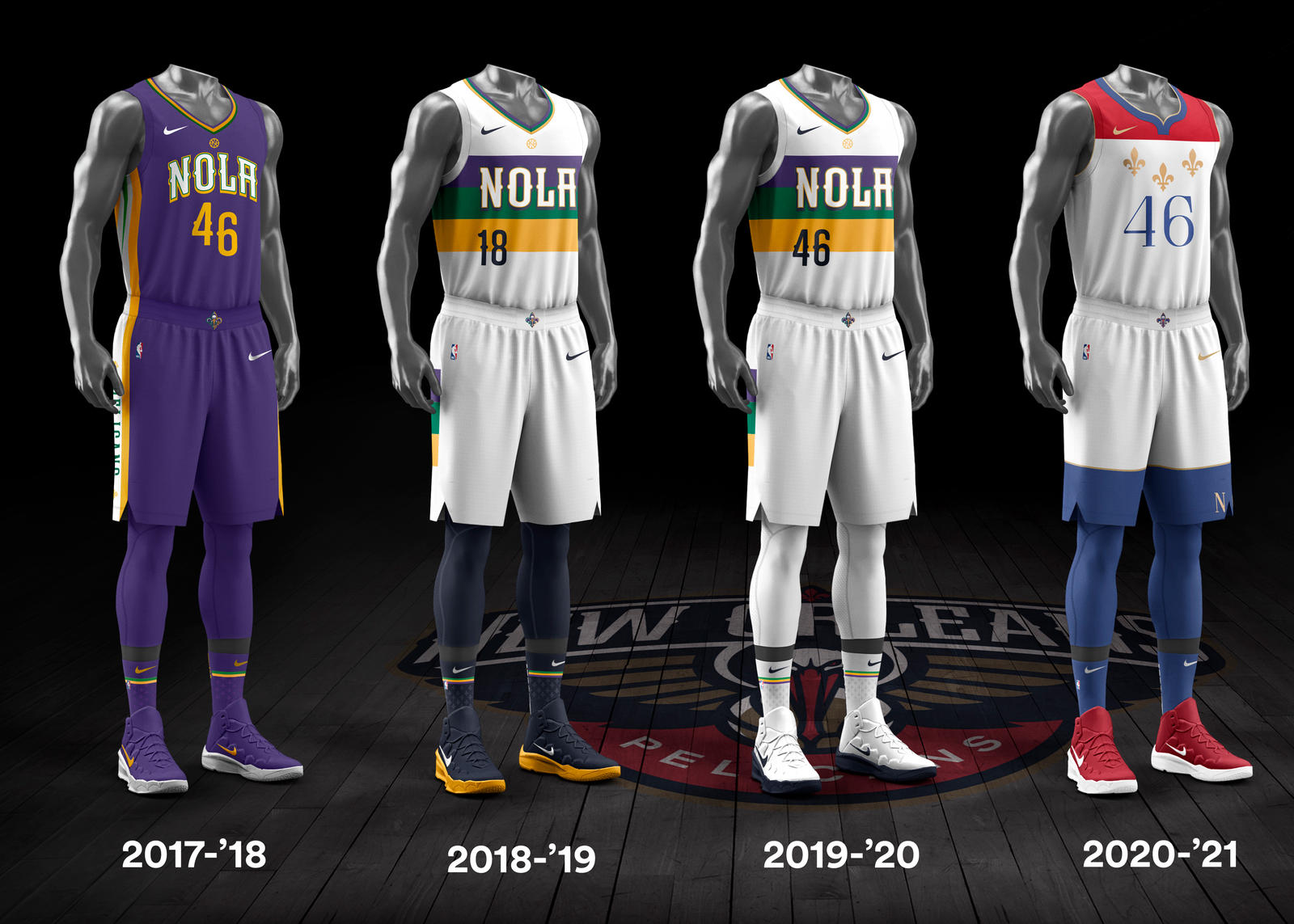 For 2020-21: The trifold color blocking and three fleurs-de-lis on the chest draw from the New Orleans city flag. 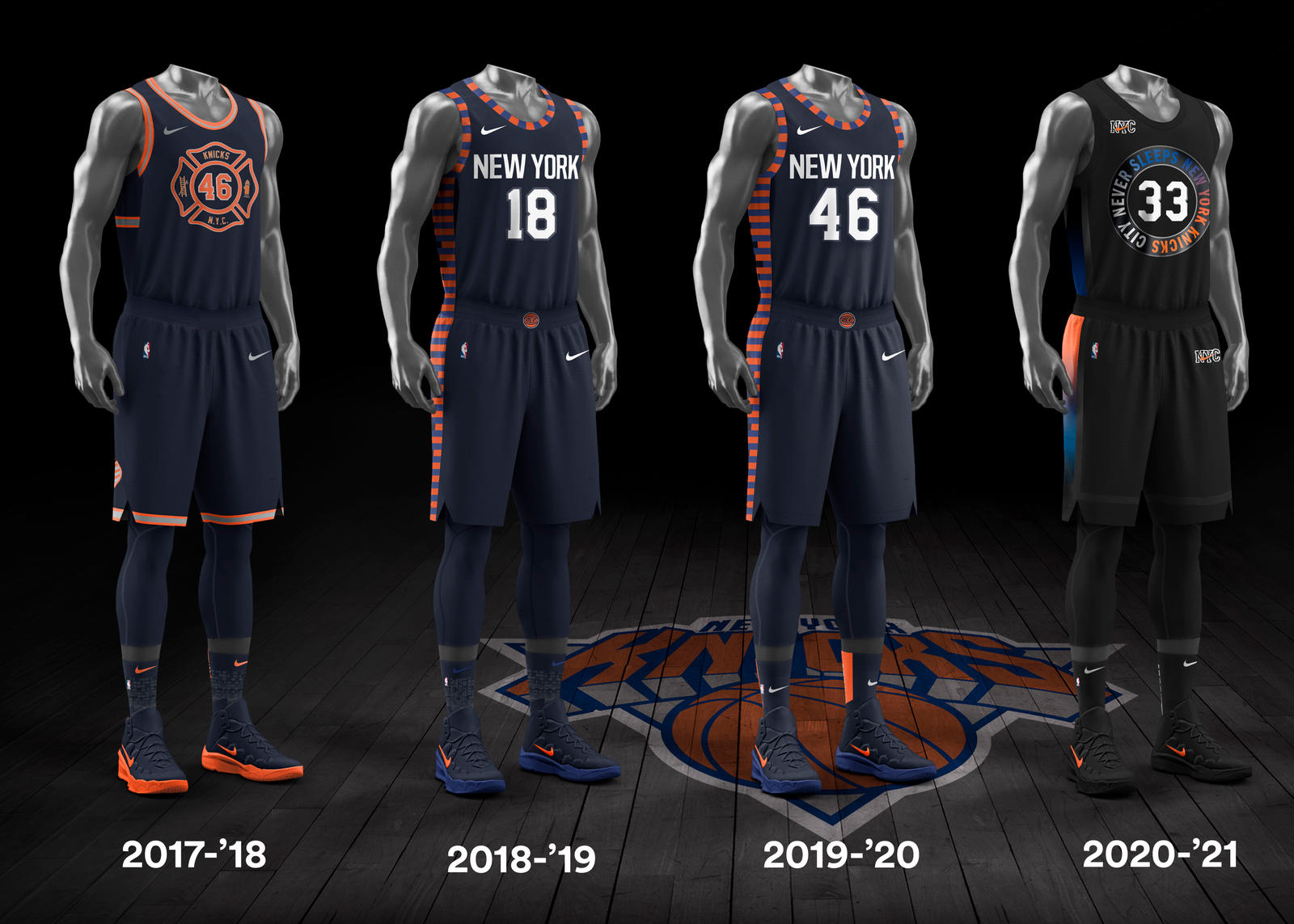 For 2020-21: The uniform incorporates a radial “City Never Sleeps” wordmark on the chest and gradient side-paneling on the shorts. 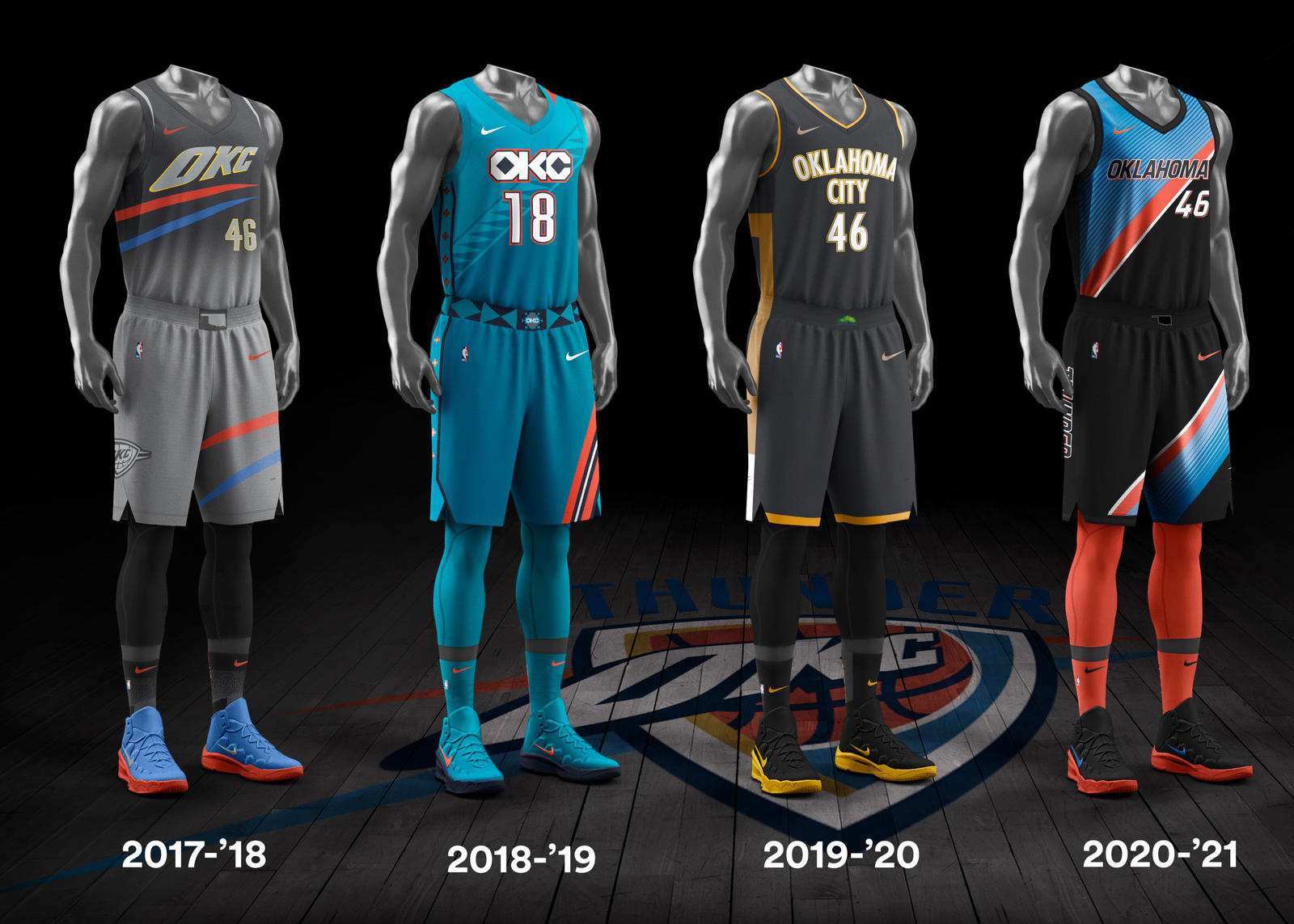 For 2020-21: An orange sash divides the top in a return to the franchise’s color palette. The state’s silhouette appears on the waistband of the shorts. 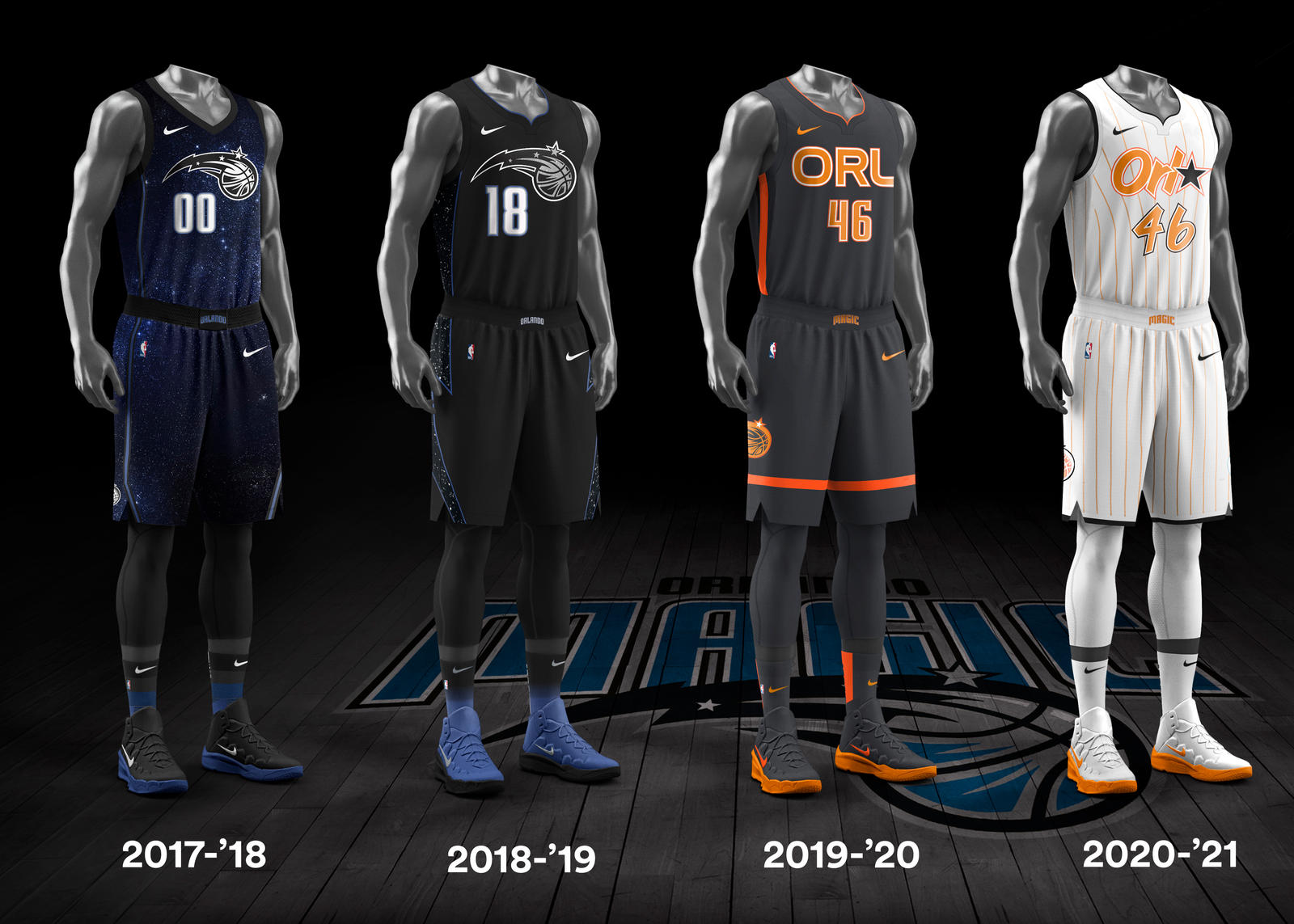 For 2020-21: The city's citrus roots are highlighted in the uniform’s cream-orange detailing and pinstripes. 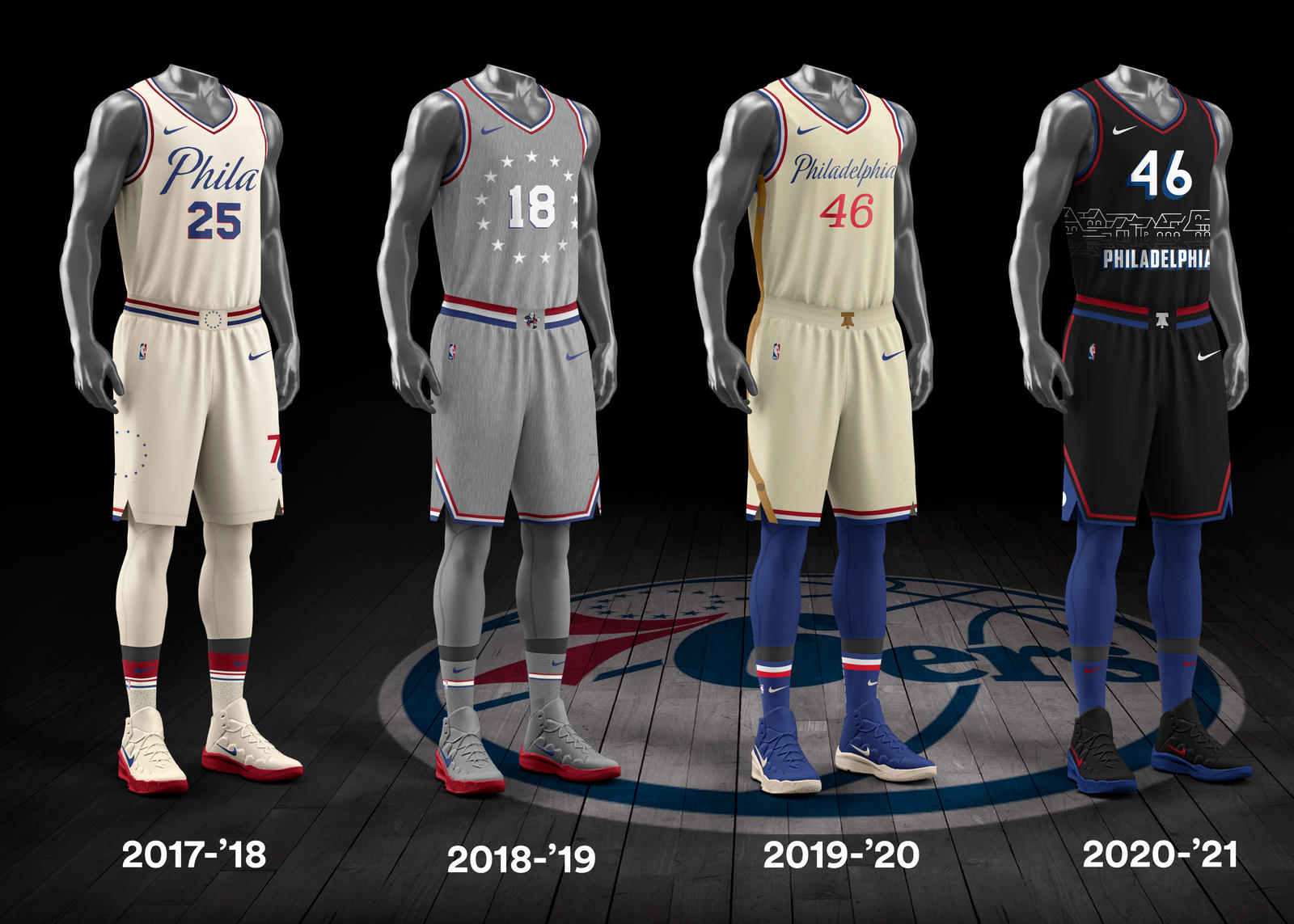 For 2020-21: The historic east bank of Philly’s Schuylkill River lights up the night skyline, a scene depicted underneath the player number. 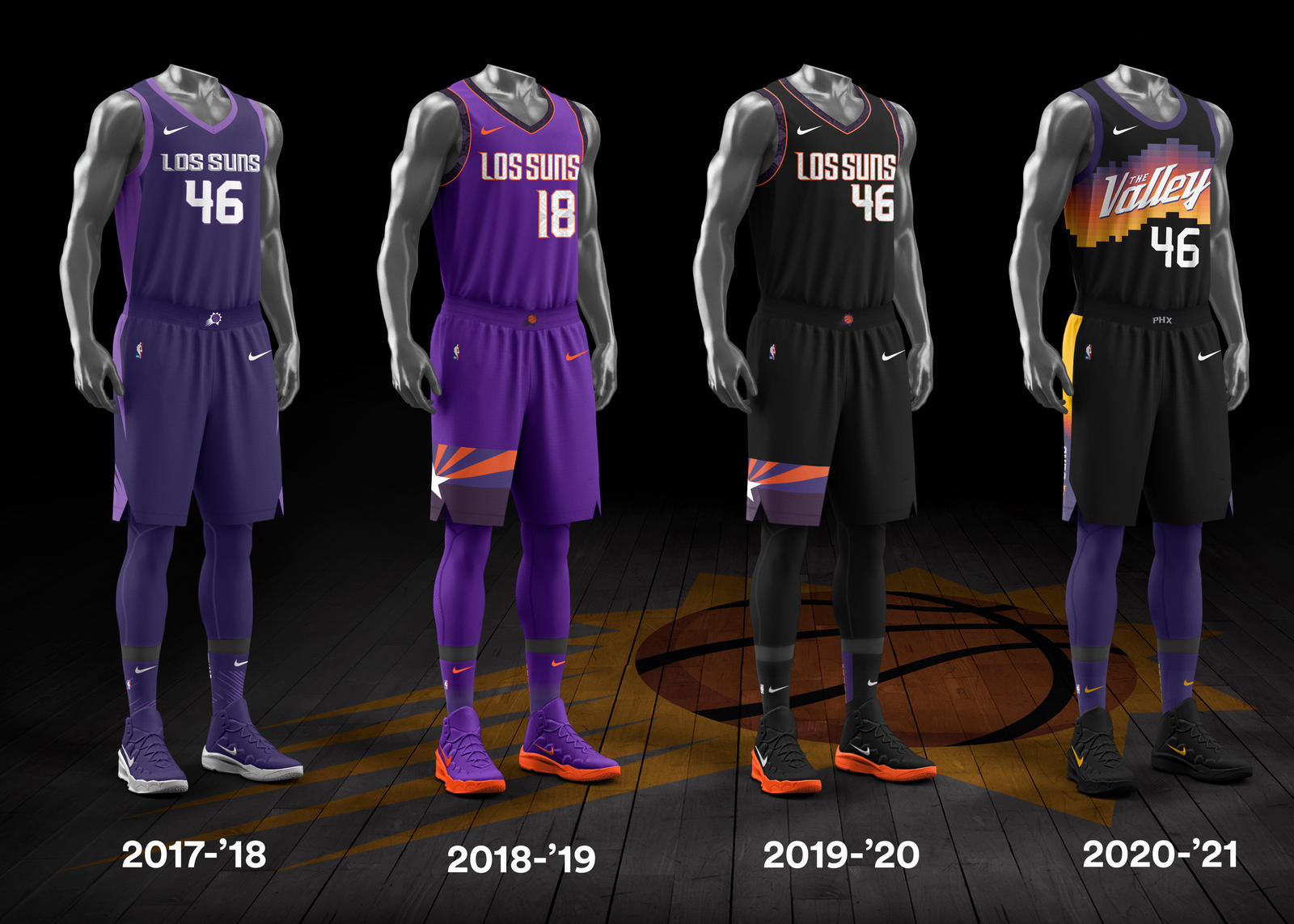 For 2020-21: A pixelated take on the Phoenix metro area’s desert scenery sets the backdrop for “The Valley,” printed across the chest. 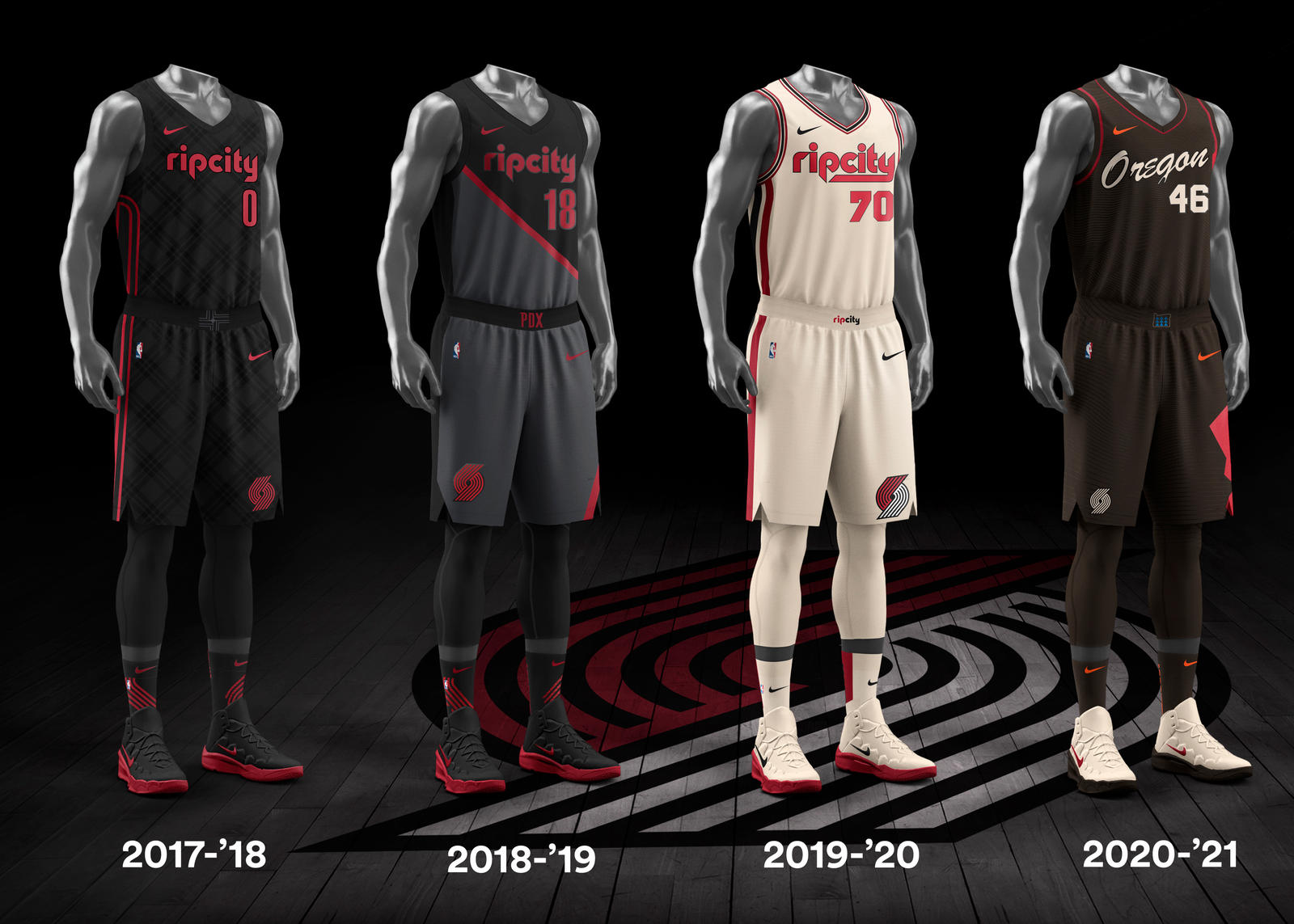 For 2020-21: Design details speak to Oregon’s diverse landscape, spanning the state’s mountains, plains and valleys through earthy tones. The font across the chest represents the city’s iconic sign above the Burnside Bridge. 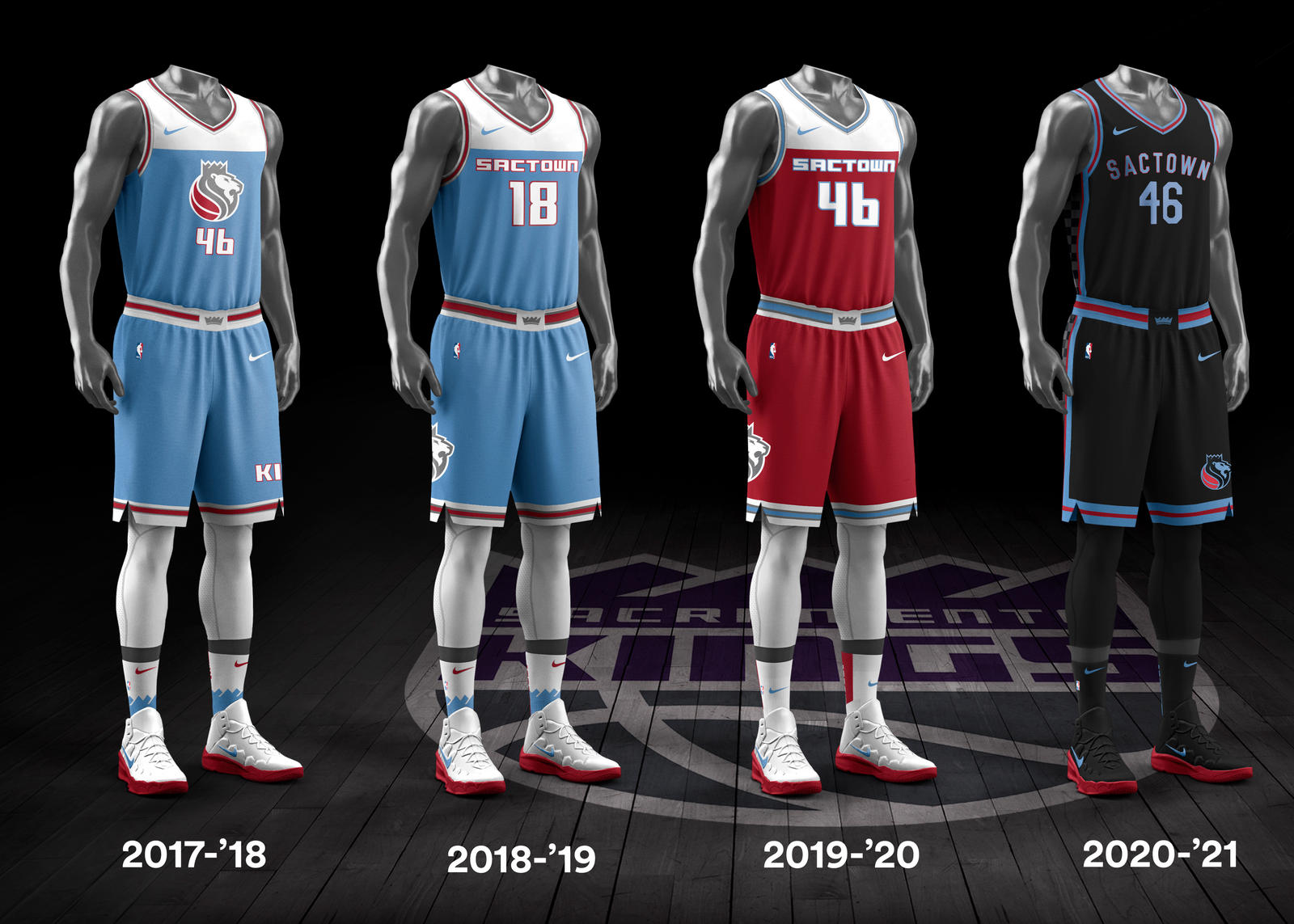 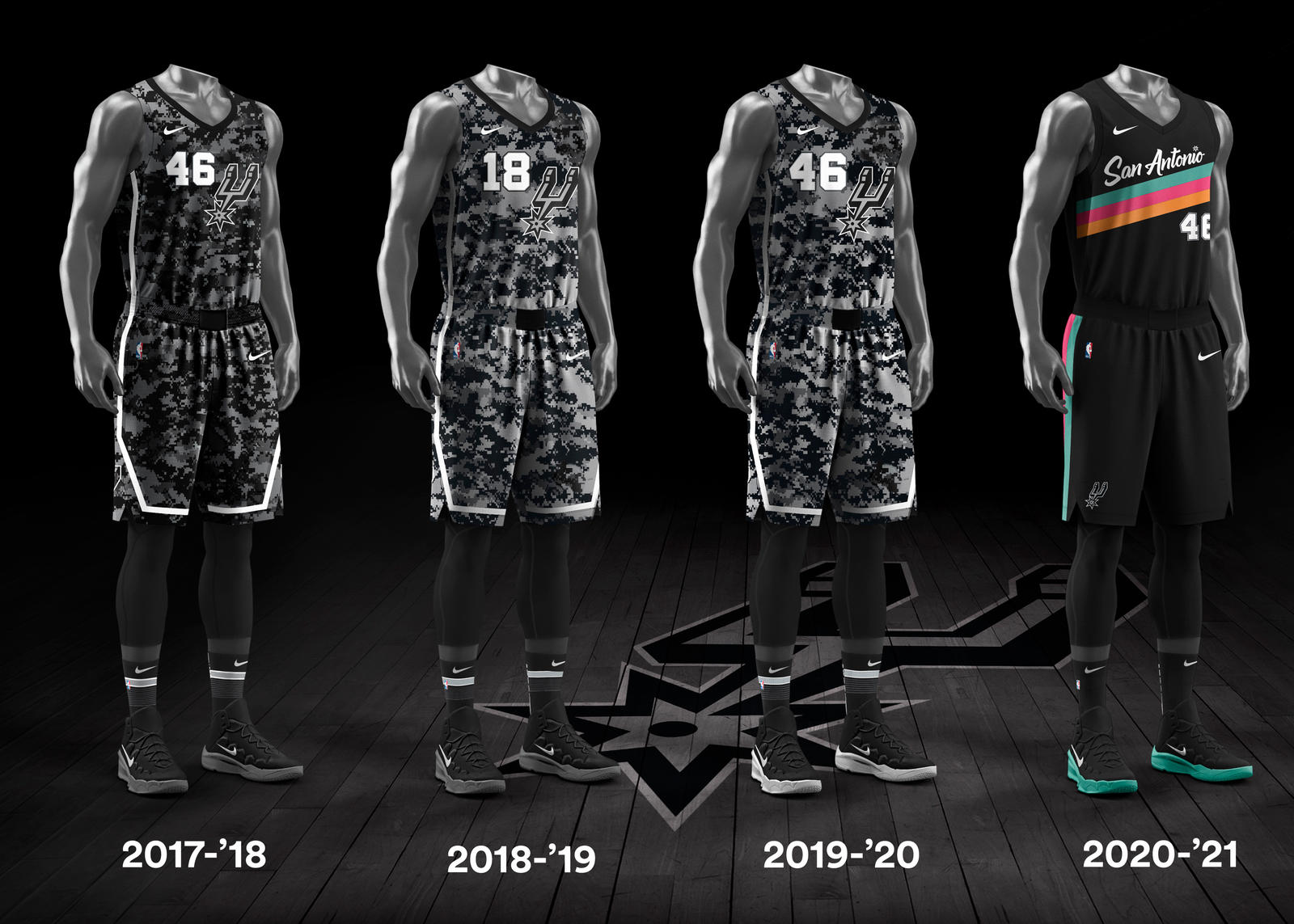 For 2020-21: The fan-favorite fiesta-theme from the early ’90s returns, featuring the teal, pink and orange tricolor sash. 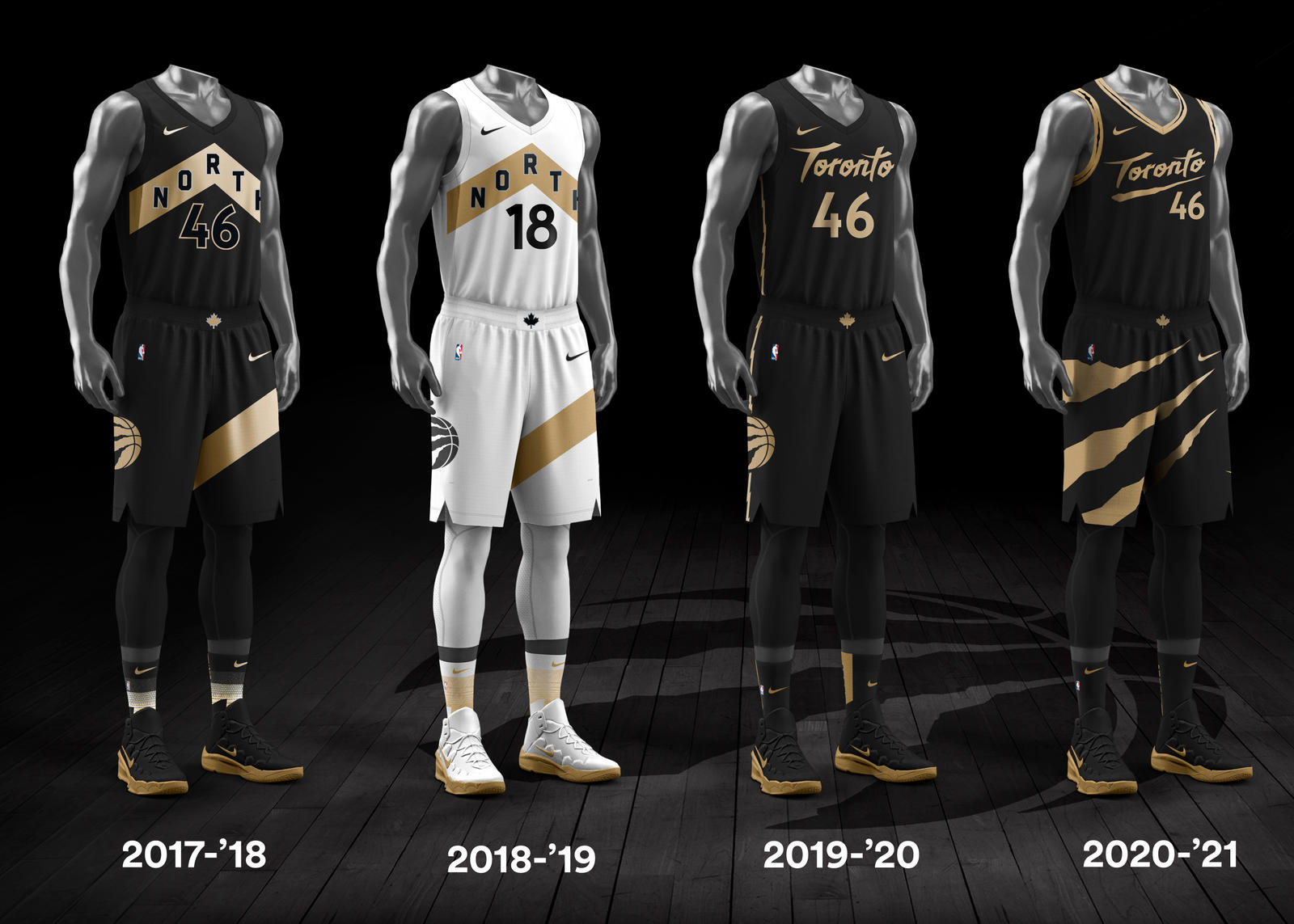 For 2020-21: Gold trim completes the neck line and sleeves, and the raptor claw takes over the entire short. 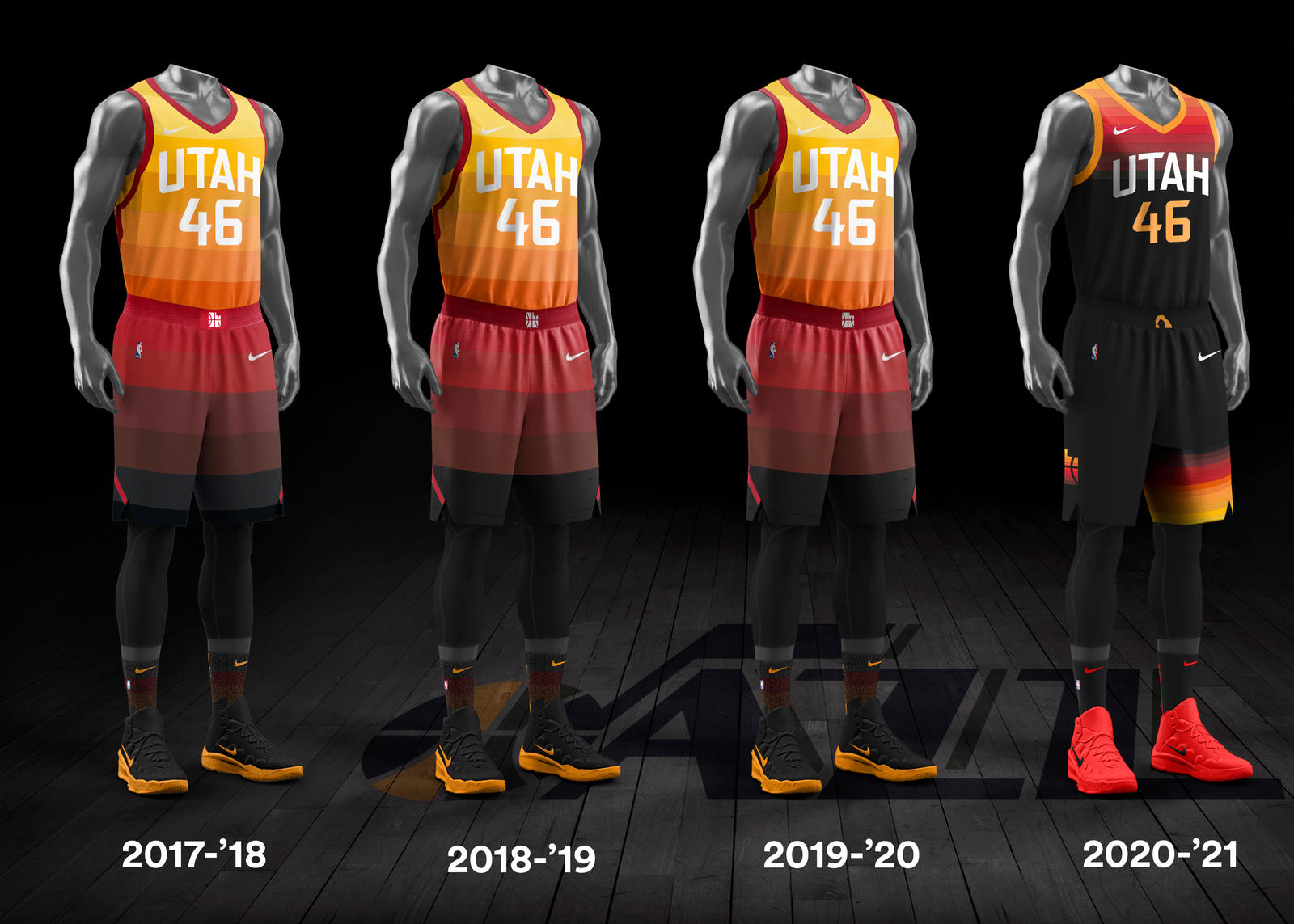 For 2020-21: For the first time, the all-over sunset gradient is substituted for a gradual fade to a black base. 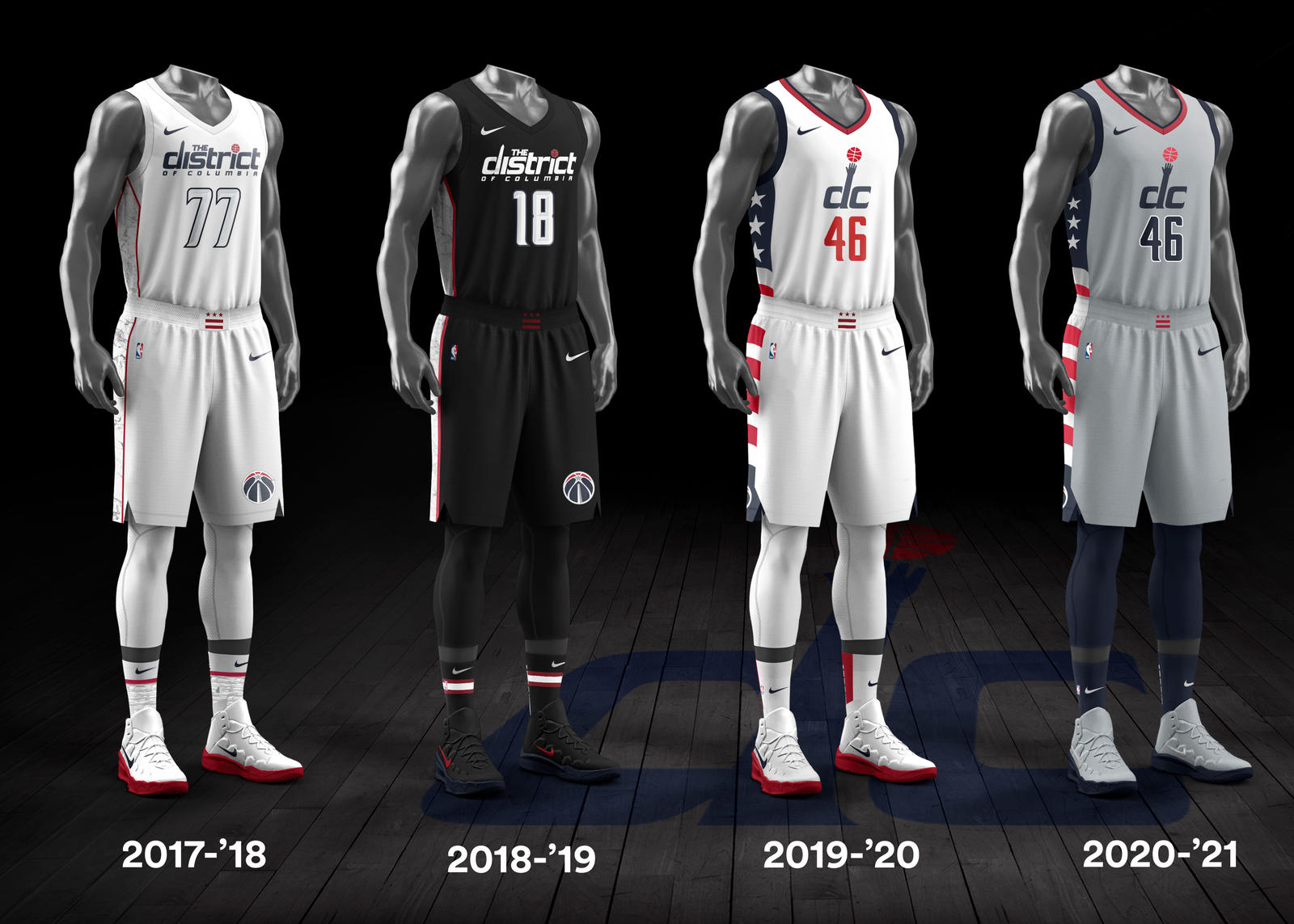 For 2020-21: The “DC” icon returns on the chest, as does the flag-inspired side-paneling, framed by a gray base.

The 2020-21 Nike NBA City Edition uniforms are available globally on nike.com and at select retailers.