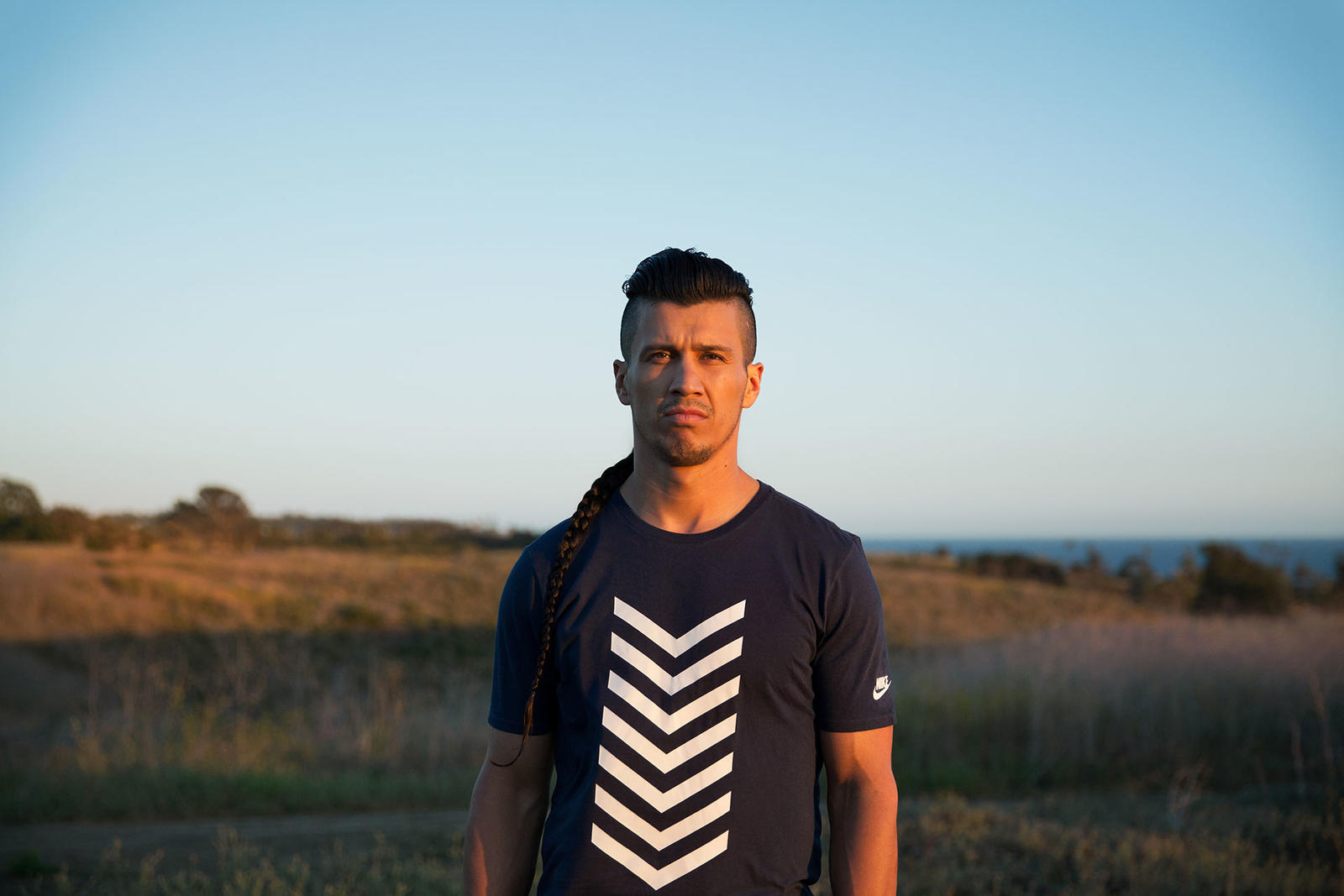 “When we introduce ourselves, it is the name given to us as a child. My name is Gaagwagyehe: The sun is leaning, the orb is going down, like the sunset.”

This line from Jeremy Thompson, member of the Iroquois Confederacy of the Onondaga Nation and professional lacrosse player, illustrates this summer’s Nike N7 collection: footwear and apparel inspired by the vertical expanse of sky and water, each element a refracted sibling of the other, bending into many blues as the sun drops into the horizon line.

The collection’s indigo print, inspired by the image of sky reflecting onto water, was made through a method of natural dyeing in which flowers were collected, mixed through a giant vat and produced onto a large piece of fabric. The image was then scanned in order for the color to be sublimated onto technical sportswear fabric. The print appears prominently in the women’s collection, covering the muscle tank, compression tights and Air Max 1. It’s also on the unisex cap as well as the heels of both the men’s N7 Air Max Motion LW and the N7 Kyrie 4, which also shows a Standing Rock tribal seal decal.

“I’m humbled that we were able to place Standing Rock’s tribal seal on this N7 shoe,” says Irving. “I’m proud of my personal history, so to have this opportunity to represent my family as well as the Standing Rock Sioux Tribe is an incredible honor. Mom, this is for you. I love you so much.” 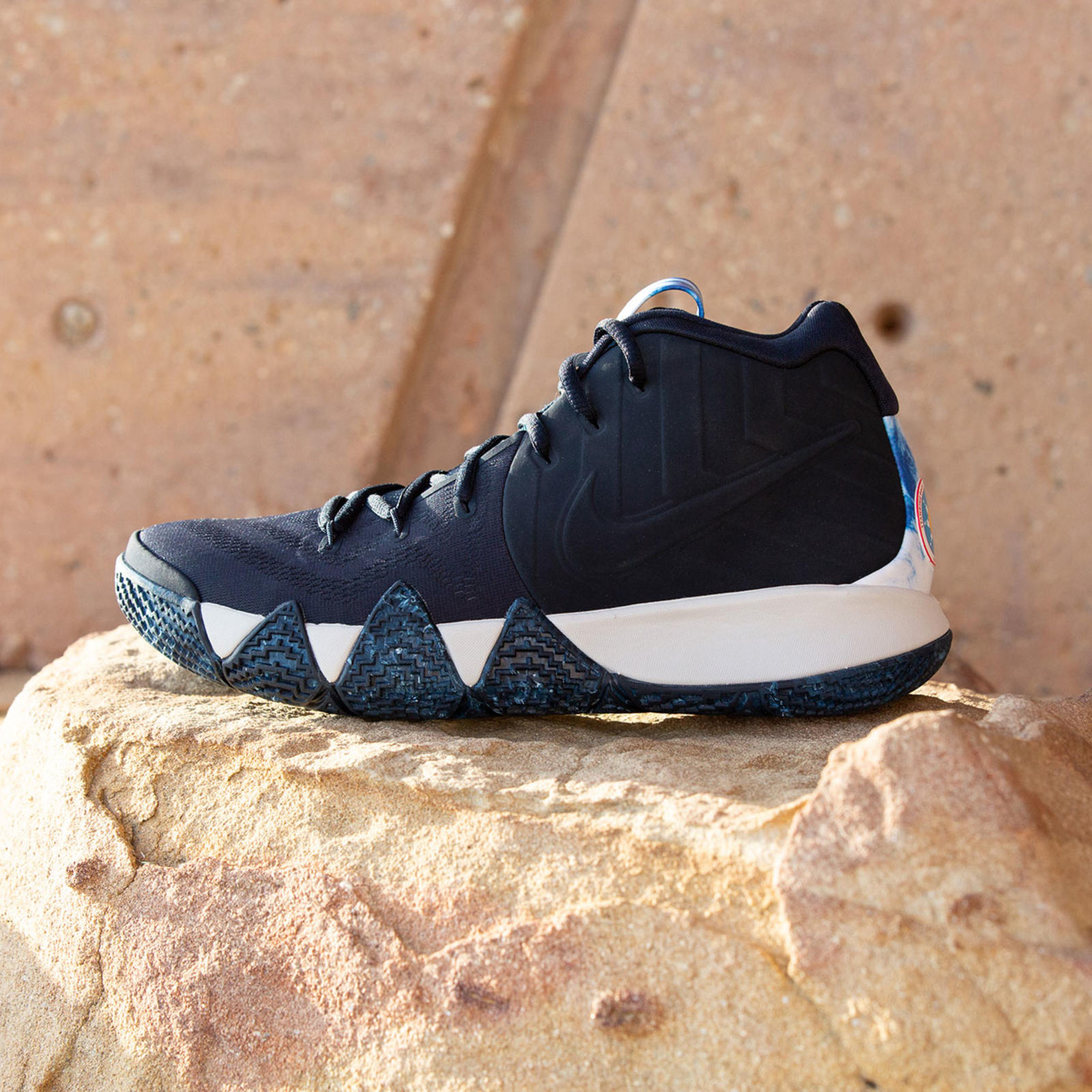 The dark obsidian of the Nike N7 Kyrie 4 is a striking contrast to the dye-inspired print on the heel and the tongue. 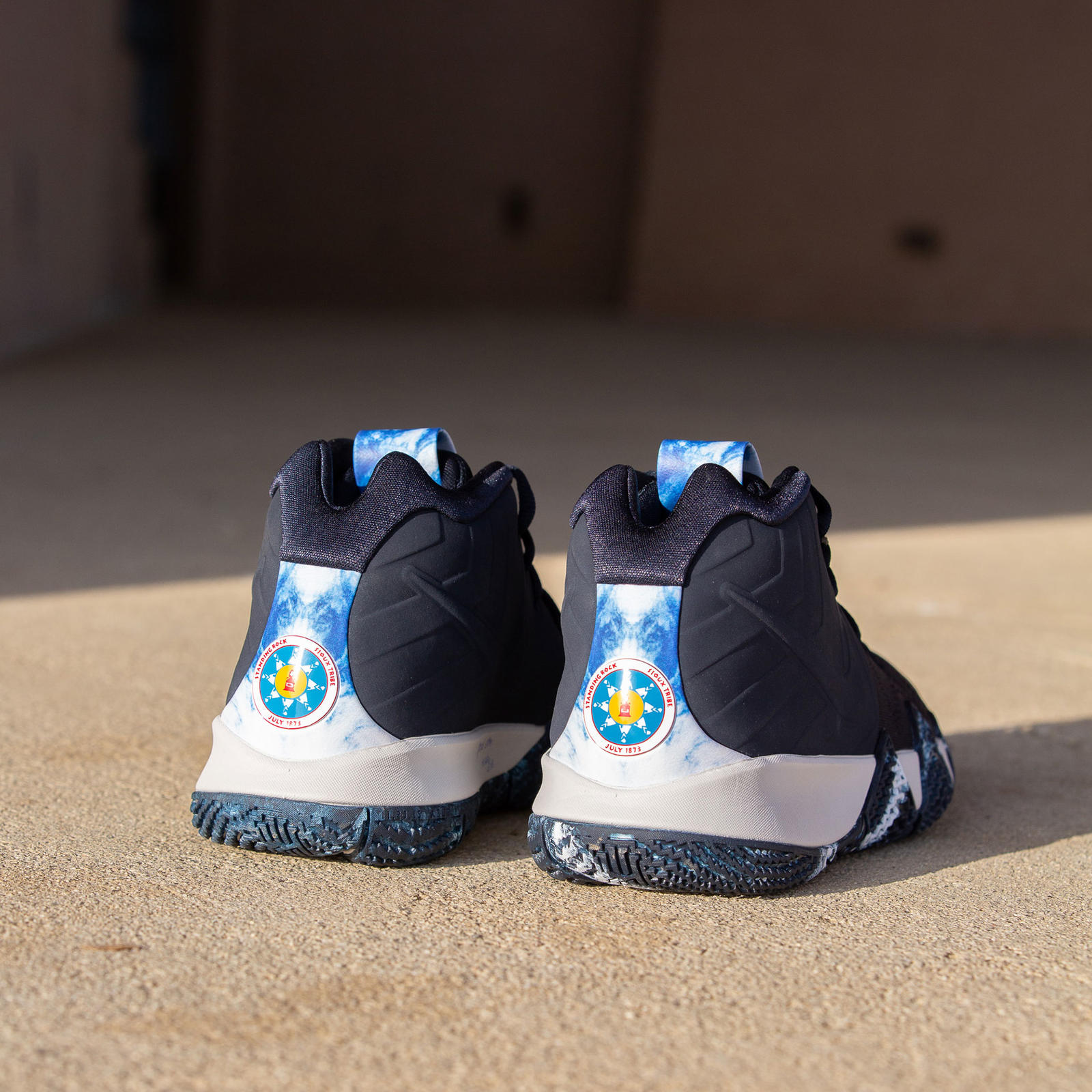 The Standing Rock Sioux tribal seal on the heel was a personal request from Irving.

The other major graphic symbol in the collection is the chevron, a recurring pattern in Native American iconography that is visible in the fletch of an arrow, beadwork and armor chest plates. Traces of the chevron are also deeply embedded in lacrosse; the collection’s hoodie uses the symbol to mimic elbow pads, offering critical protection for Thompson in the heat of play. Seven bars, standing for the number’s significance in the N7 collection (its mission statement reads, "In every deliberation, we must consider the impact of our decisions on the seventh generation"), compose the classic pattern.

Strength is reinforced throughout the collection by the chevron graphic’s visibility: The symbols are bold, particularly in the T-shirts, which display the chevron on the chest. The graphic also appears in inconspicuous areas of other apparel, including the elbows of the hoodie, on the embroidered front of the hat and down the calf of the women’s tights. 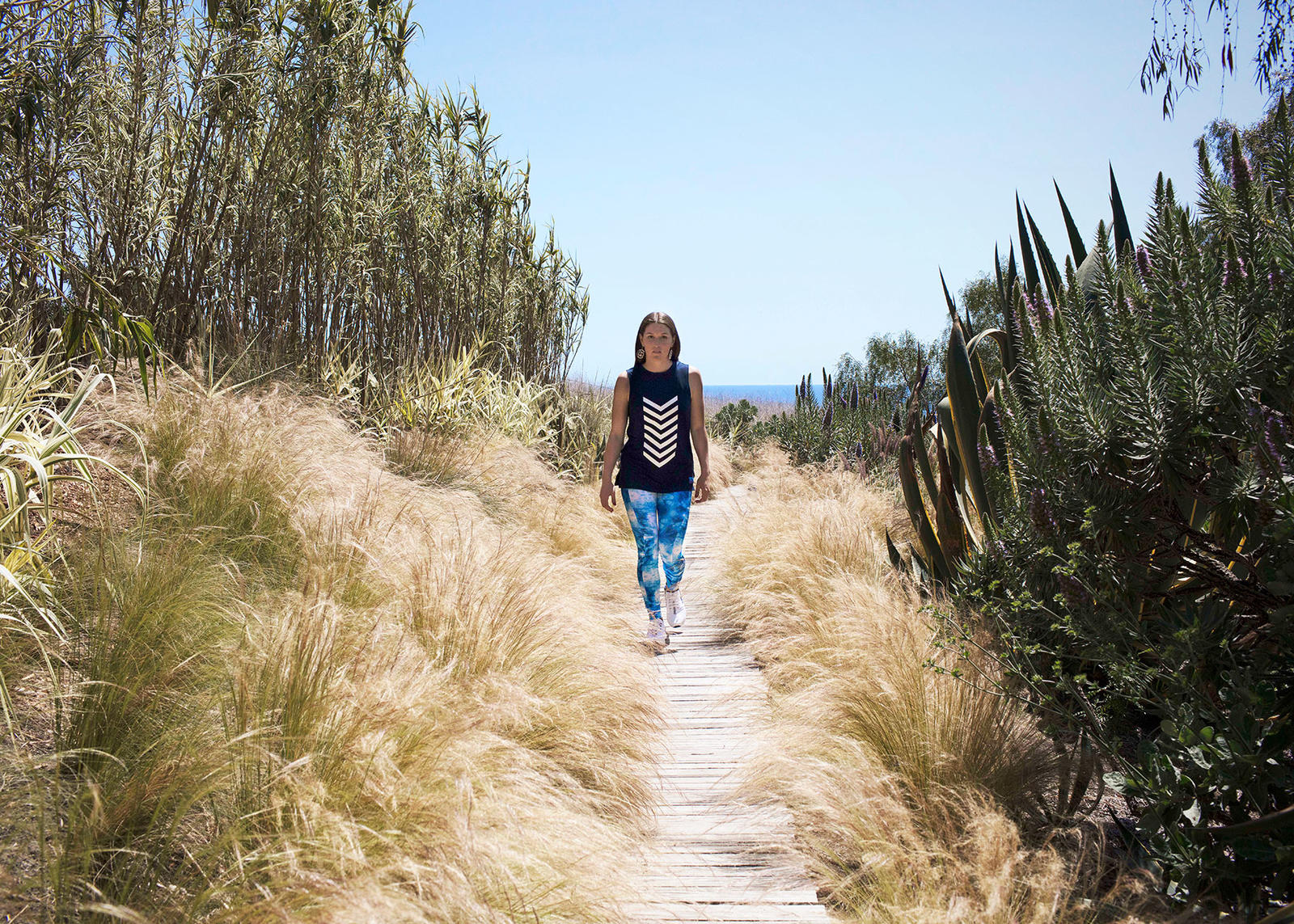 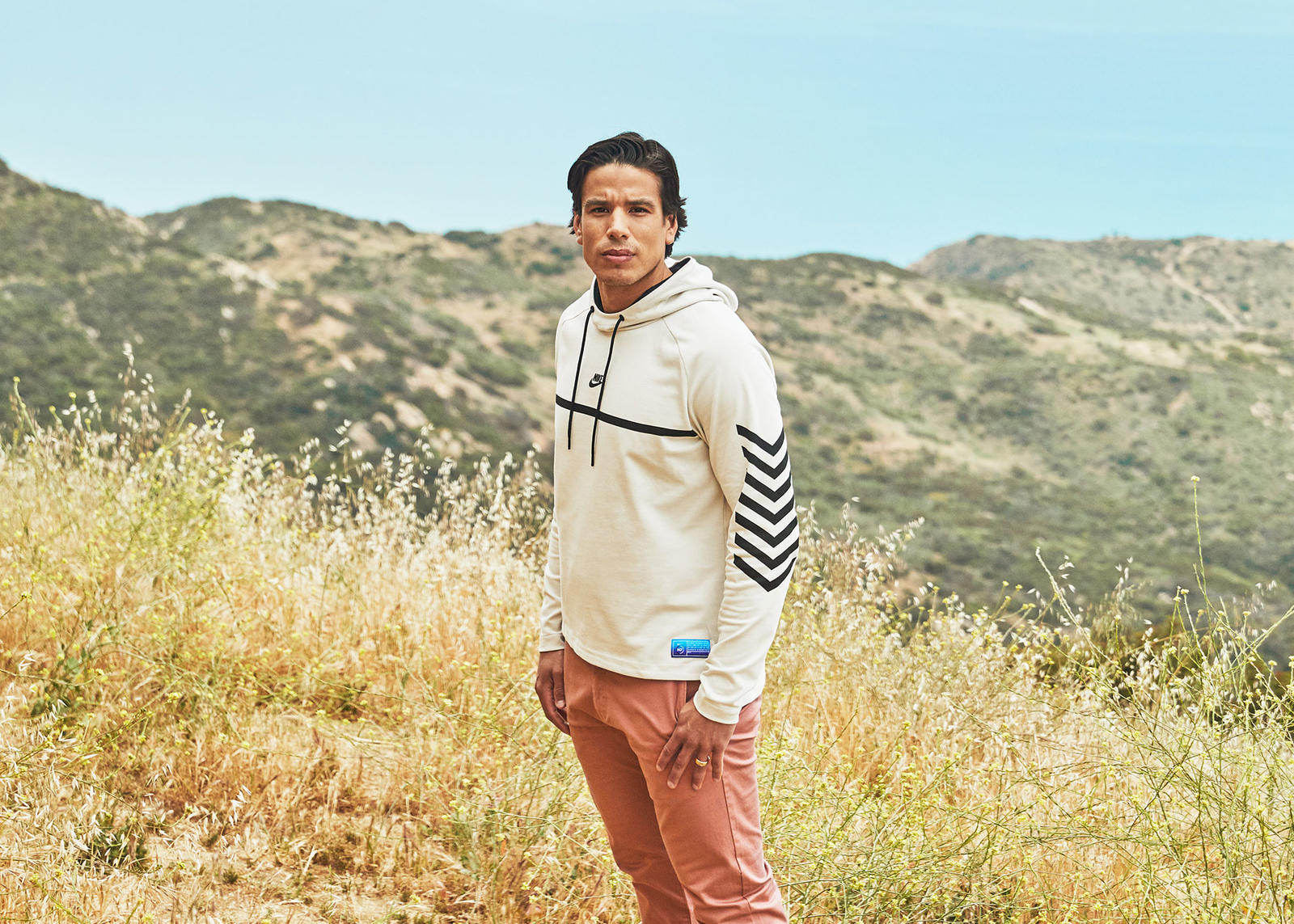 Nike believes kids aren’t meant to sit still, they’re Made to Play. The N7 collection supports Nike’s commitment to get kids moving through the N7 Fund, which supports organizations to provide sport and physical activity programming to kids in Native American and Aboriginal communities so that they can lead healthier, happier and more successful lives. Since its inception in 2009, the N7 Fund has awarded $5.6 million in grants to 243 communities and organizations, reaching more than 420,000 youth. Harnessing the power of sport as a unifying force, the N7 Fund helps kids reach their greatest potential and reflects Nike’s belief in creating more equal playing fields for everyone.