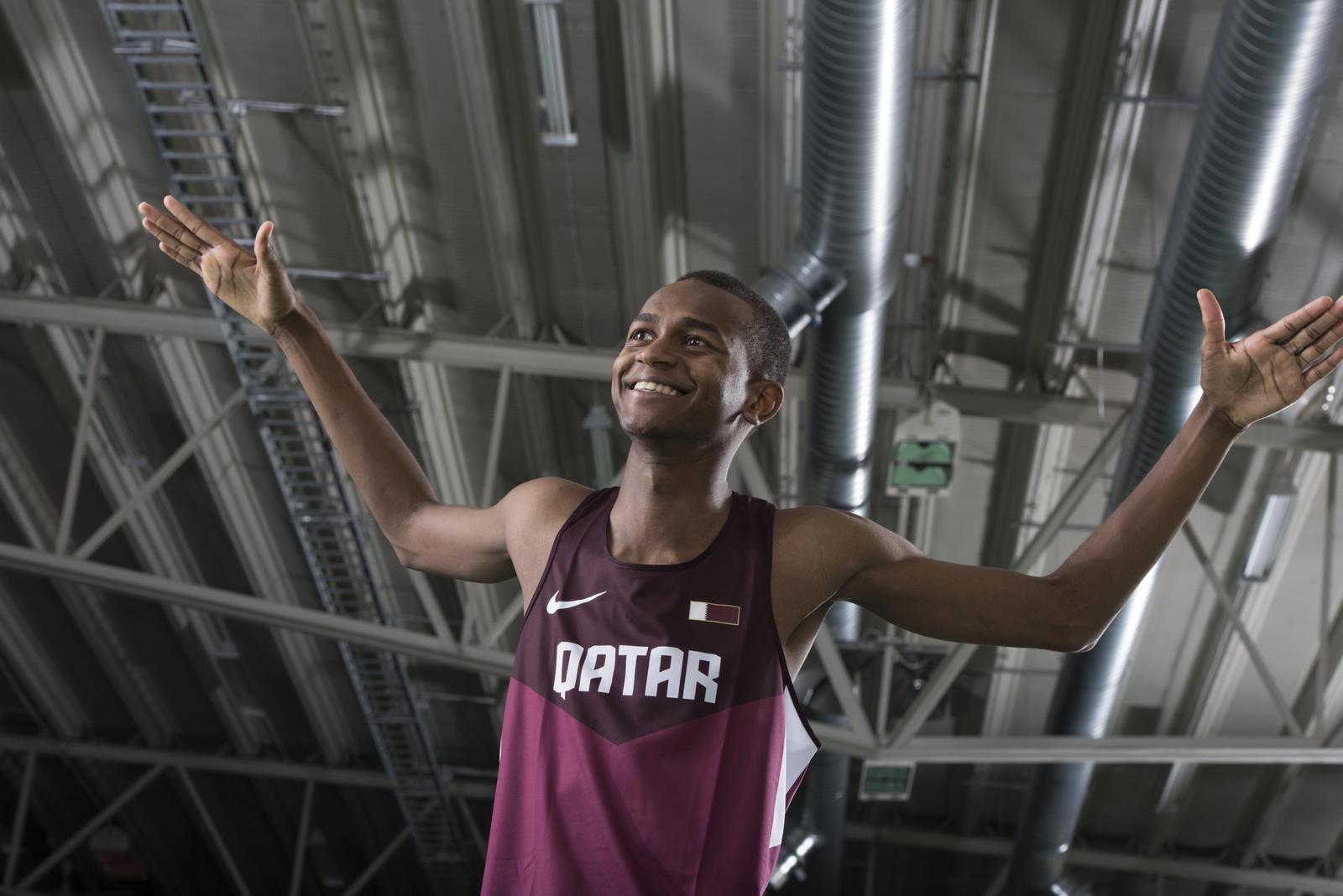 Standing 188 centimeters high, 25-year-old Qatari high jumper Mutaz Essa Barshim can clear a bar 1.3 times his own height. But in order to topple the sport's 23-year-old world record held by Cuba’s Javier Sotomayor, Barshim needs to add two centimeters to the seminal 2.43-meter jump he completed at a 2014 meet in Brussels.

Recalling the moment, Barshim beams. “It was just crazy. When the other guy jumped 2.40 meters, everyone thought it was over for me. [He] was already celebrating and I was thinking: Just wait. I was looking at my coach and he was like, 'We can do it.' That moment I looked at the track and everyone was screaming, but I had tunnel vision. I went out there and my first attempt, 2.43 meters, was the second highest jump in history. The stadium was shaking. I couldn’t sleep the night after. My back was hurting for a week, my knee was hurting for a week but we did it. We made history.”

Barshim — the first high jumper to come through the Gulf region and capture medals on the international stage — is currently at the pinnacle of his sport, but his journey to the top was less than conventional. Growing up in Doha, Barshim was introduced to track and field by his father Essa, who was a competitive race-walker.

“I got inspired to be a track and field athlete because he always took me with him to the track when he was training. I would see him running, training, doing his drills,” recalls Barshim. “One of the biggest moments that inspired me is that I saw him on TV finishing first in a race in the Gulf Championship.”

Consequently, Barshim followed his father’s footsteps until his coach at Al Rayyan Sports Club suggested jumping and Barshim took up the long jump, triple jump and high jump. “By the age of 14, I specialized in the high jump. I loved it, but I was really bad at it. Until 17, I was always the worst,” he recounts.

Then, at 16, Barshim cleared two meters, a milestone that was followed in 2009 by his first-ever medal, a bronze at a Gulf Championship in Saudi Arabia, thanks to a 2.14-meter jump.

Soon after, Barshim met his coach Stanislaw Szczyrba, a Polish-born Swede who is responsible for helping the athlete to comfortably jump 2.40 meters and above, win the 2010 World Junior Championship and secure a medal in London 2012 — he is one of only four men from Qatar to claim a medal at the Games.

“The moment I got off the plane after [London] seeing, like, the whole country at the airport was, like, ‘Wow,’ he says. “Now in Doha, you see a lot of families coming to the track, bringing their kids. They want to take pictures. It’s nice seeing more people wanting to do sport.”

In 2014 Barshim continued his streak, winning the World Indoor Championship — now he’s aiming to replicate that feat, one jump at a time.

“I want to focus on going as high as possible, maybe 2.50 meters. Through that, the world record is included. That’s the best way to think about it: step-by-step. I want to be satisfied after I retire," says Barshim. "I don’t want to retire and feel like I could have given more. That’s why I don’t have any of my medals or trophies out. I keep them in storage and only let them out for a photo shoot or something. Later when I finish [competing], I can look back and see what I’ve done.”