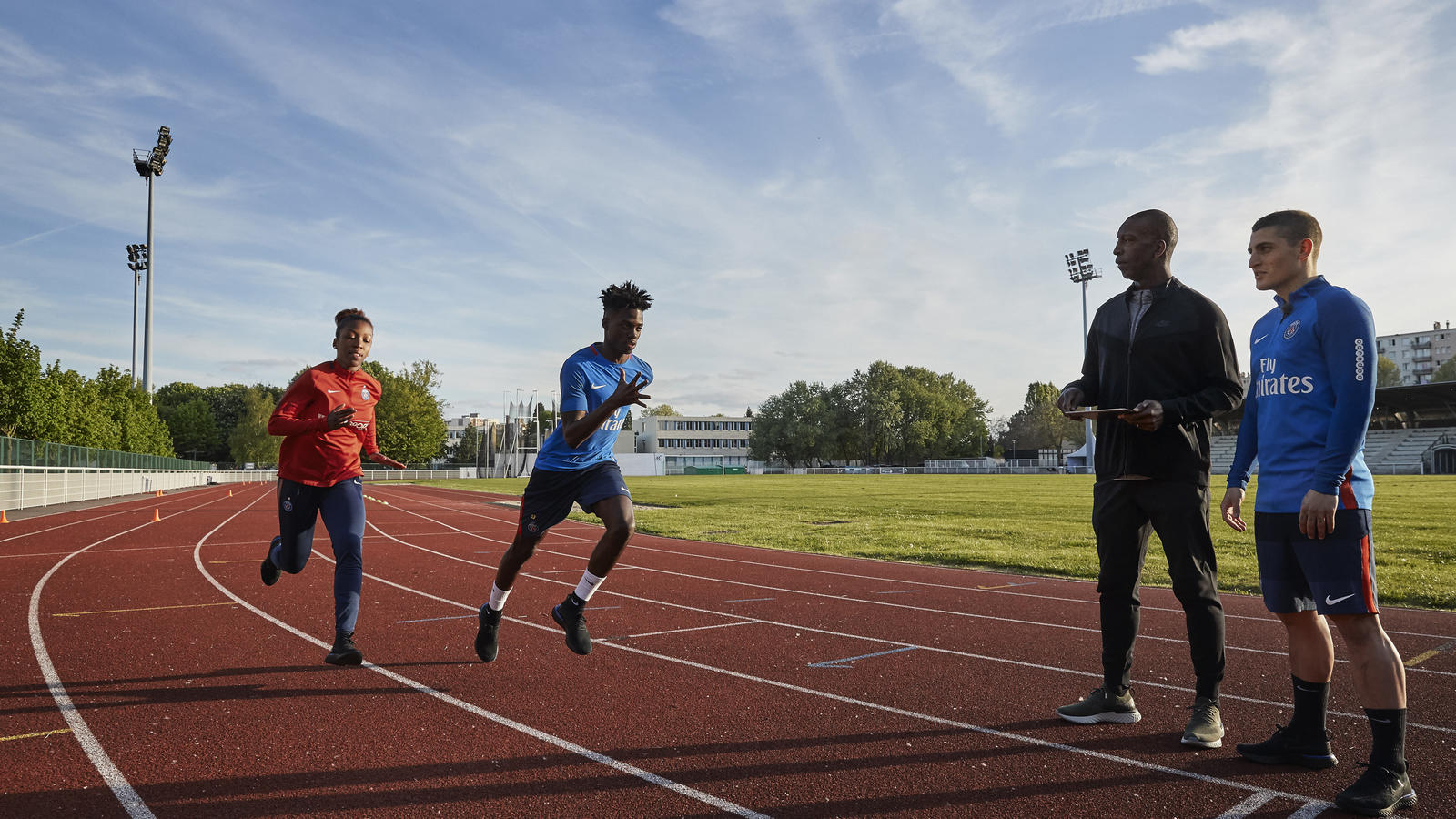 Two members of the Paris Saint-Germain football club take powerful strides across the oldest running track in Paris. Off to the side, former Olympian Michael Johnson carefully studies their gaits. Their limbs, a collection of shifting angles, contract with their steps, each a flash of any of the reported 1,500 subtle movement changes that can occur in a span of five seconds during a match. 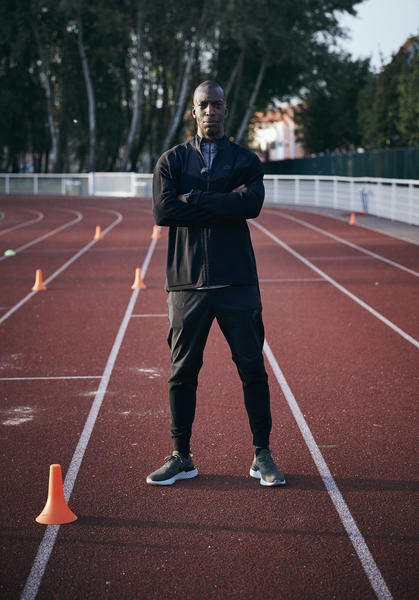 The American sprinter and former World’s Fastest Man recently led a training session to provide feedback on the running mechanics of American forward Timothy Weah and Congolese-born French midfielder Grace Geyoro with the goal of helping them improve their speed, agility and change of direction. Closely watching Johnson’s instruction was Italian midfielder Marco Verratti, who was eager to soak up the rare learning opportunity.

Of all the elemental movements in sport, running from one point to another is as essential in function as it is varied in example. Speed, then, is the ideal of that foundation, a sensitive balance of form, power and coordination that Johnson knows intimately well.

Beyond, there’s first-step acceleration, acceleration from an odd position, acceleration after landing from a header, side-stepping at speed and jockeying for the ball, among others. His theory is that each of these phases requires a unique biomechanical approach, a variety that applies differently to strikers, defenders, midfielders and goalkeepers.

“Each one of those positions calls on different running skills. Some of the players are running more, some are using acceleration bursts more than others, some are able to get out into maximum-velocity sprinting more than others and some of them are more focused on change of direction,” says Johnson. “It’s about looking at each athlete and determining what sort of speed, acceleration and quickness are required for the position.”

To do that for the PSG players, Johnson observed and recorded each athlete as they warmed up and did different drills led by two Nike Track-and-Field coaches. The small group performed alterations of their strides. The midfielders did short sprints, maintaining strict form, before finding their top speeds again to a designated endpoint on the track. Series of sprints between cones and parachute running added an element of resistance training to the workout. 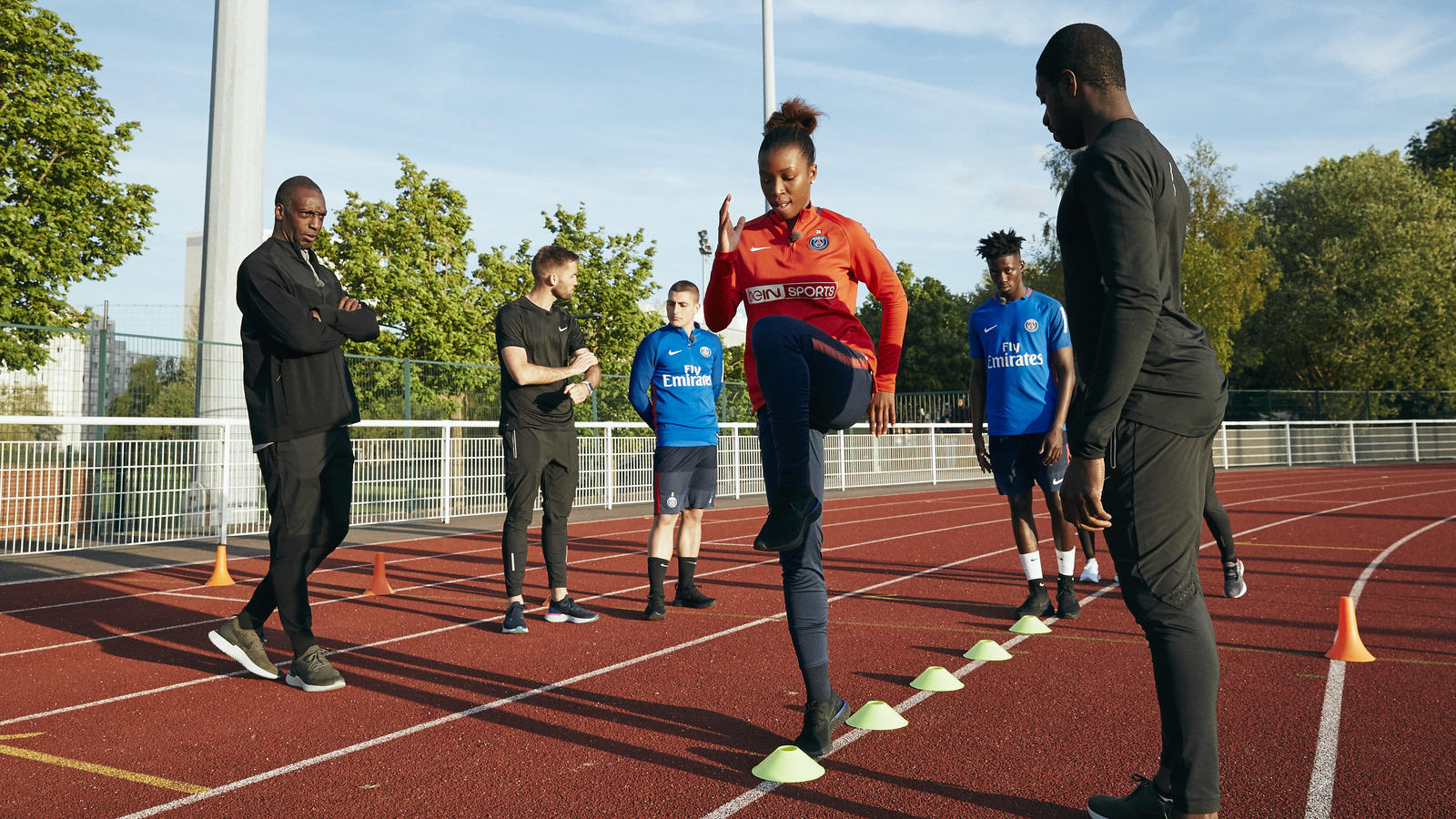 Geyoro drives her knees high during a drill. 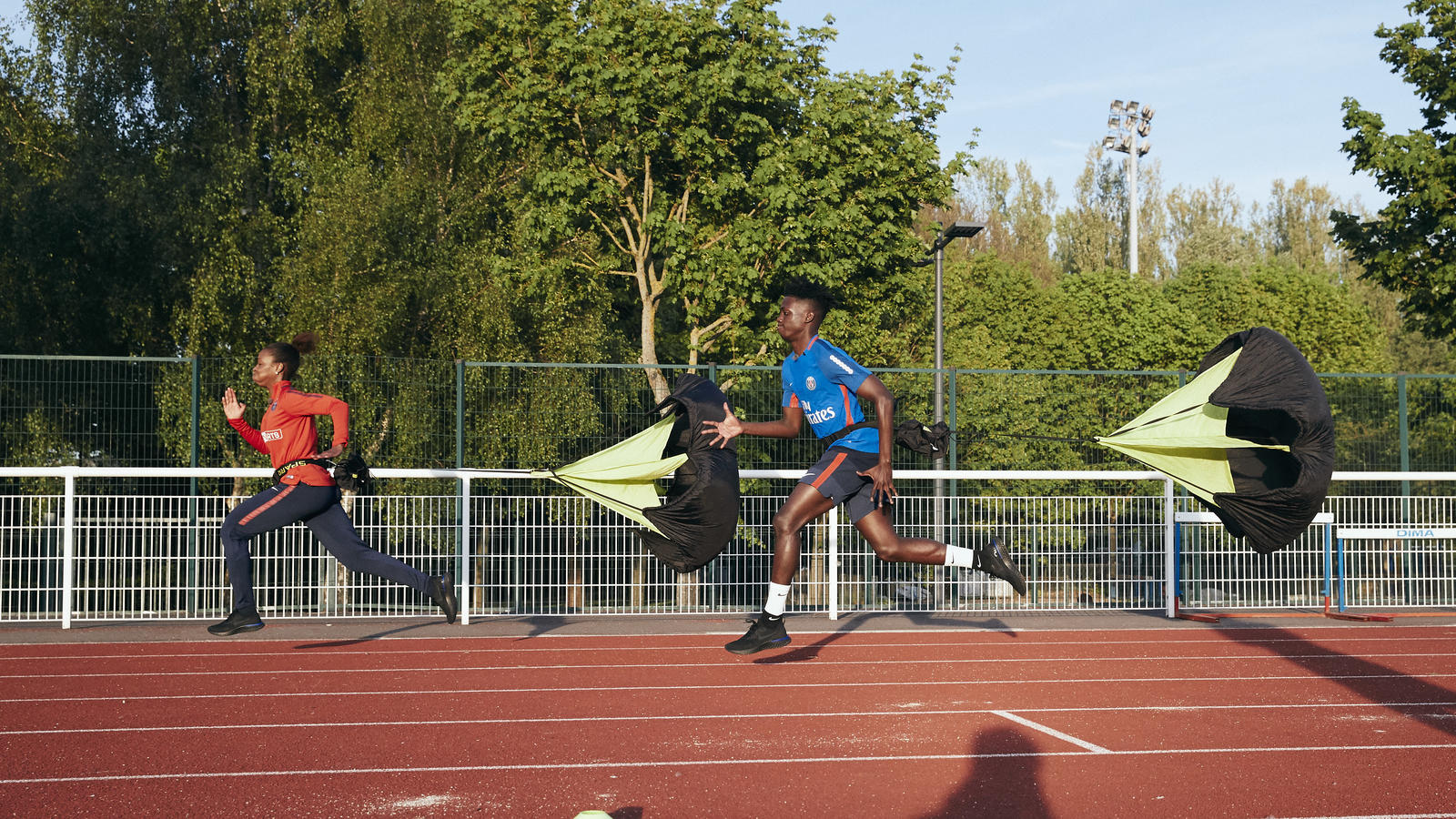 “As a striker, just being here with Michael Johnson and learning to keep my body straight and working on my acceleration is a huge key to becoming a better striker and a better player,” said Weah about his parachute work. 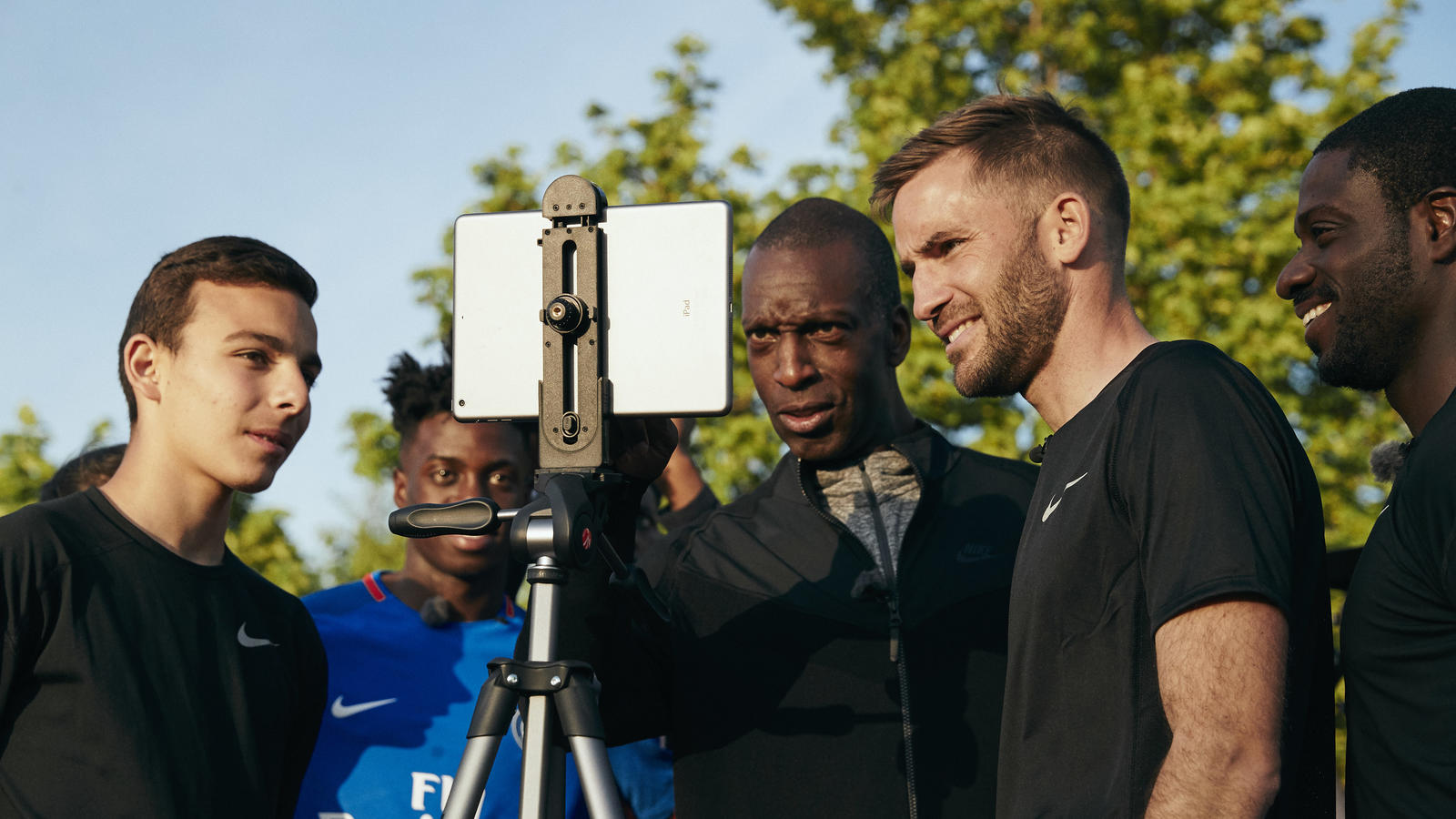 Johnson, Nike coaches, and the athletes break down the footage. 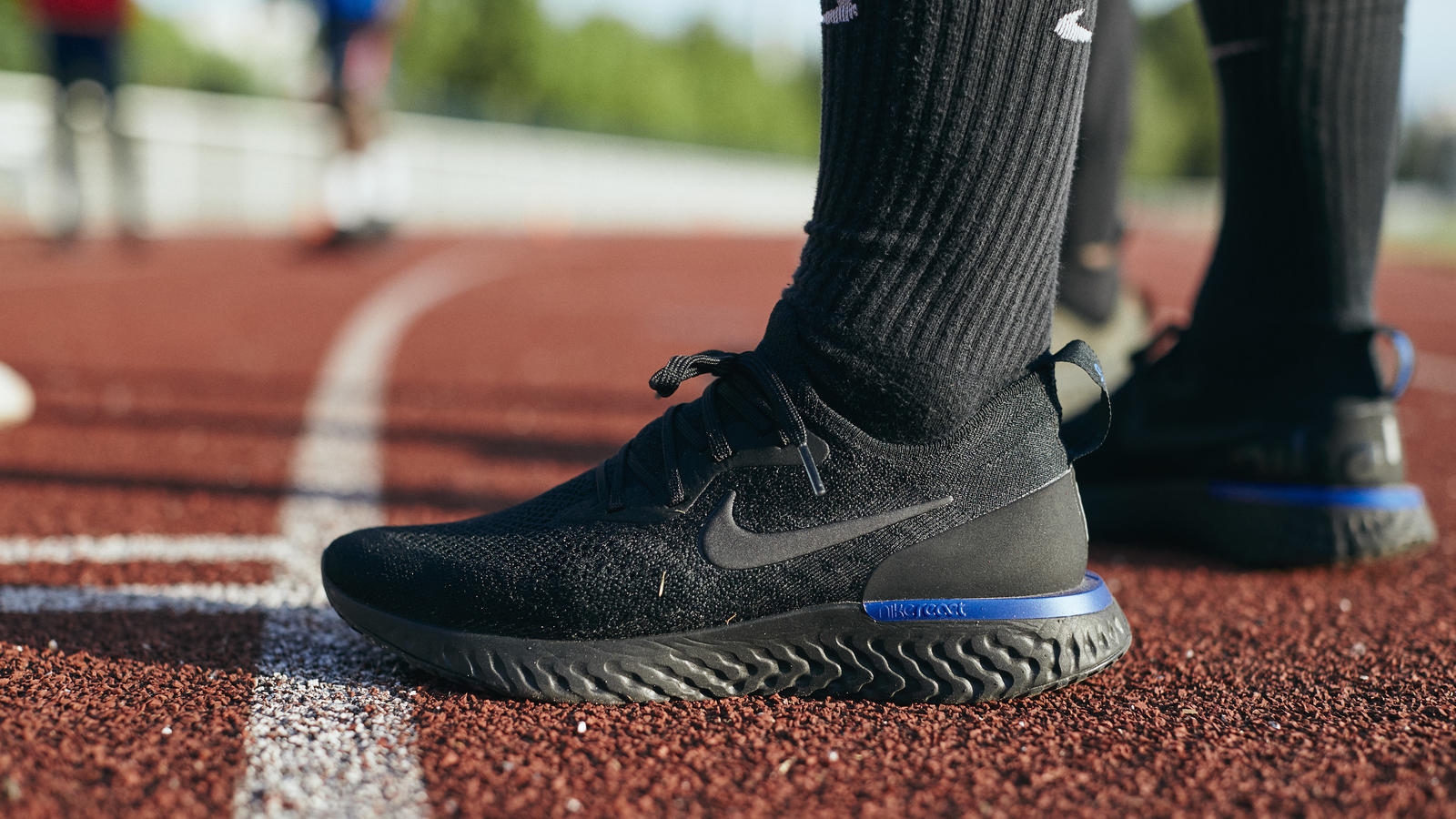 For the session, the three athletes wore the Nike Epic React Flyknit.

Johnson analyzed the video playback and shared feedback after each drill. For Weah, he focused on improving his chest posture. For Geyoro, it was pumping her arms more efficiently. In all, Johnson took a different approach than he would use to coach a sprinter, as sprinters need to be faster linear runners and football players move multi-directionally, he says.

But the technical importance of sprinting, no matter what sport, is a constant. The reality is that a player will touch the ball, on average, for a total of just two minutes per game, meaning that his or her impact along the game’s periphery – how effectively he or she runs in the form of an all-out sprint – can mean the difference between a win or a loss over the course of a match.

"The session was a great experience,” says Geyoro. “We had the chance to try out a new sport and learn different sprinting techniques like stride analysis. Details like foot positioning and lessons like learning how to position my body were very interesting and a lot of fun. As footballers, when we play, our focus is the ball, but I like to try to improve in every aspect to become a better athlete.”

-Sprinting (20 meters) based on feedback

-Exercise for forwards: sprints between cones (increasing in length)

The latest Nike Epic React Flyknit releases are available now on nike.com and at select retailers.