The new Mercurial Superfly was designed with one thing in mind: speed. Every component was created to work in concert towards the singular goal of unleashing a player’s full speed potential.

“Our approach with the new Mercurial was to challenge all assumptions about speed, merging science with design to build the fastest boot in football,” says Nike Football Design Lead Jeongwoo Lee. “We designed this boot holistically to ensure it was a true speed system, where all of the materials interlock to produce the most efficient package possible.” 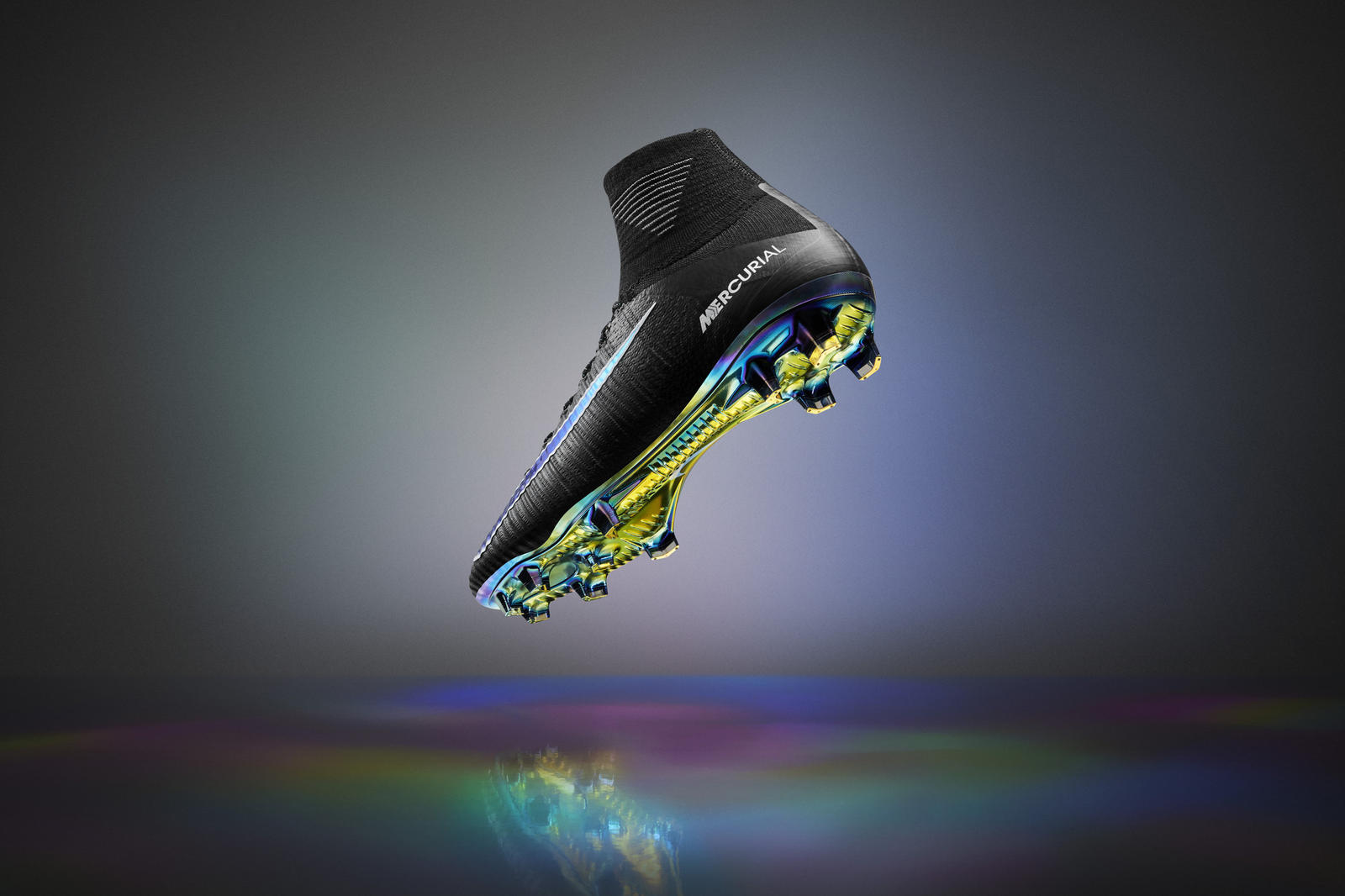 Lee and his team collaborated with the Nike Innovation Kitchen team, Nike Sport Research Lab (NSRL) and Nike experts from track and field. “The first opportunity for advancement we identified was better incorporating the shape of the foot to create a true one-to-one fit,” continues Lee. “We had been working with a flat sole plate, but the human foot is not flat.”

Consequently, the new anatomical Nike plate maps the natural contours of the foot, eliminating the gap that previously existed underfoot. By cradling the foot, it enables the foot to move with the boot instead of against it. “The contoured plate provides a more natural fit, by allowing your foot to be nested within it” says Lee. “The physiotherapists we worked with believe this will reduce pressure-point irritations as well as unwanted movement inside the boot, thereby maximizing energy return during high-speed play.” 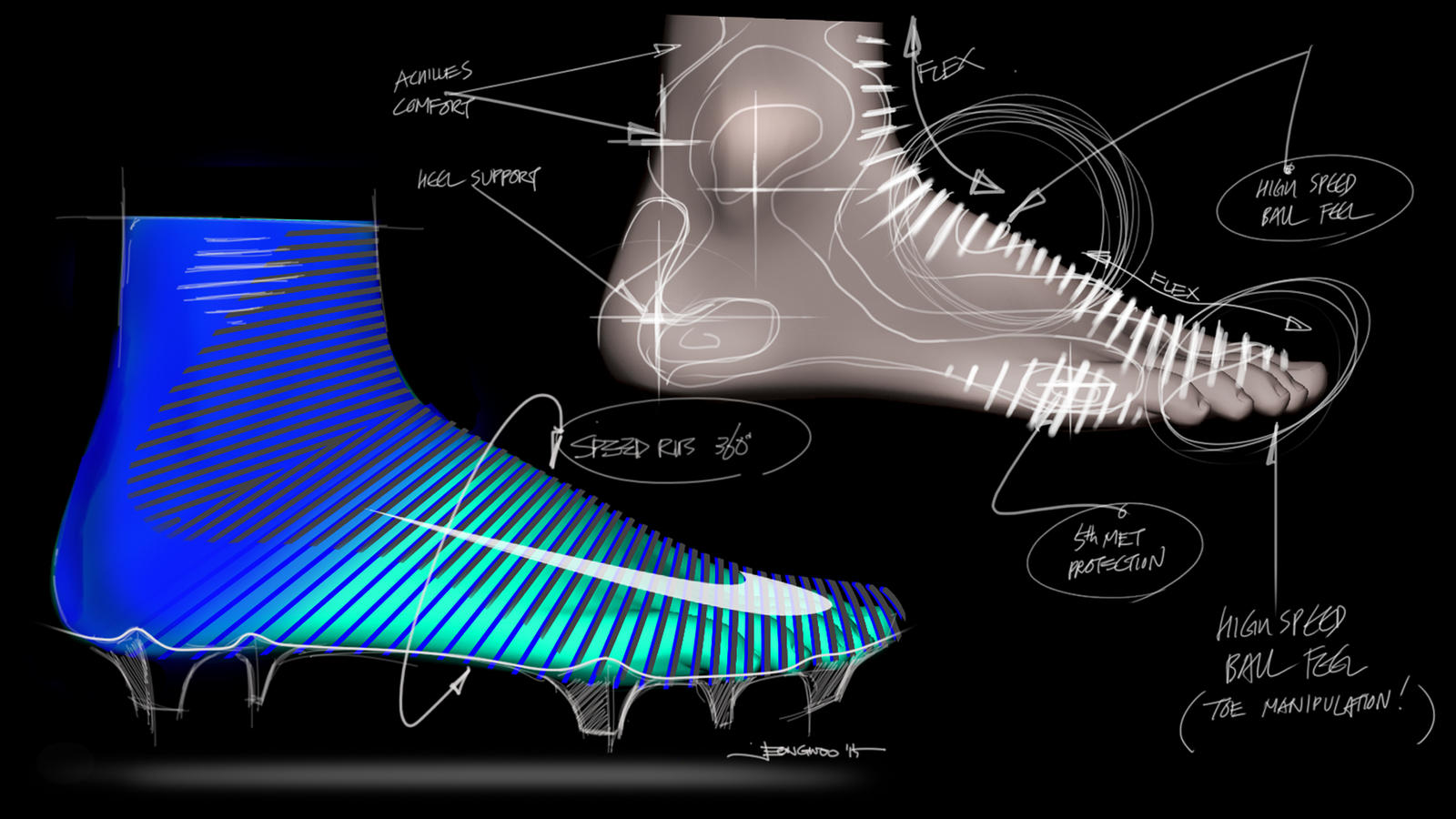 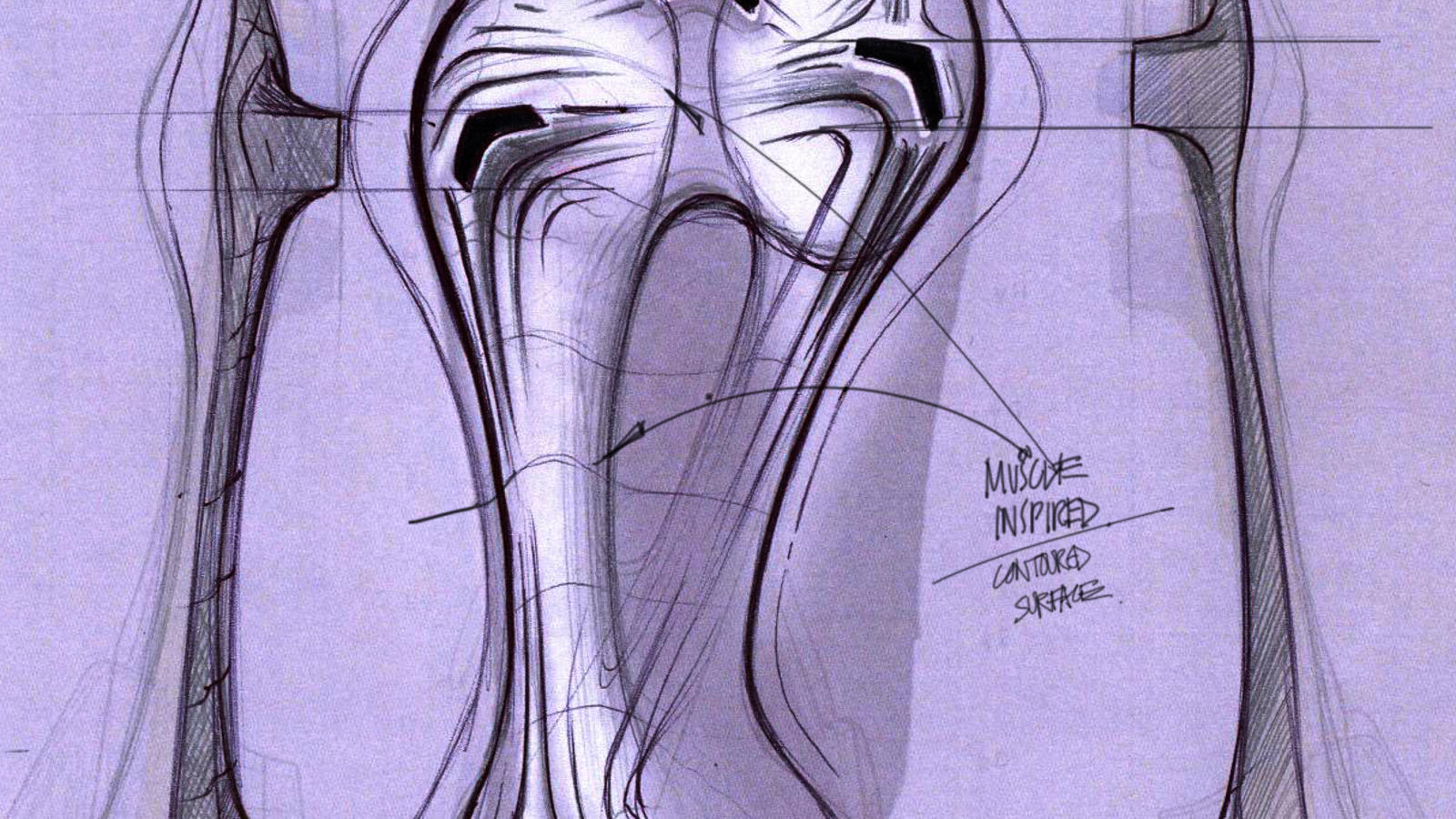 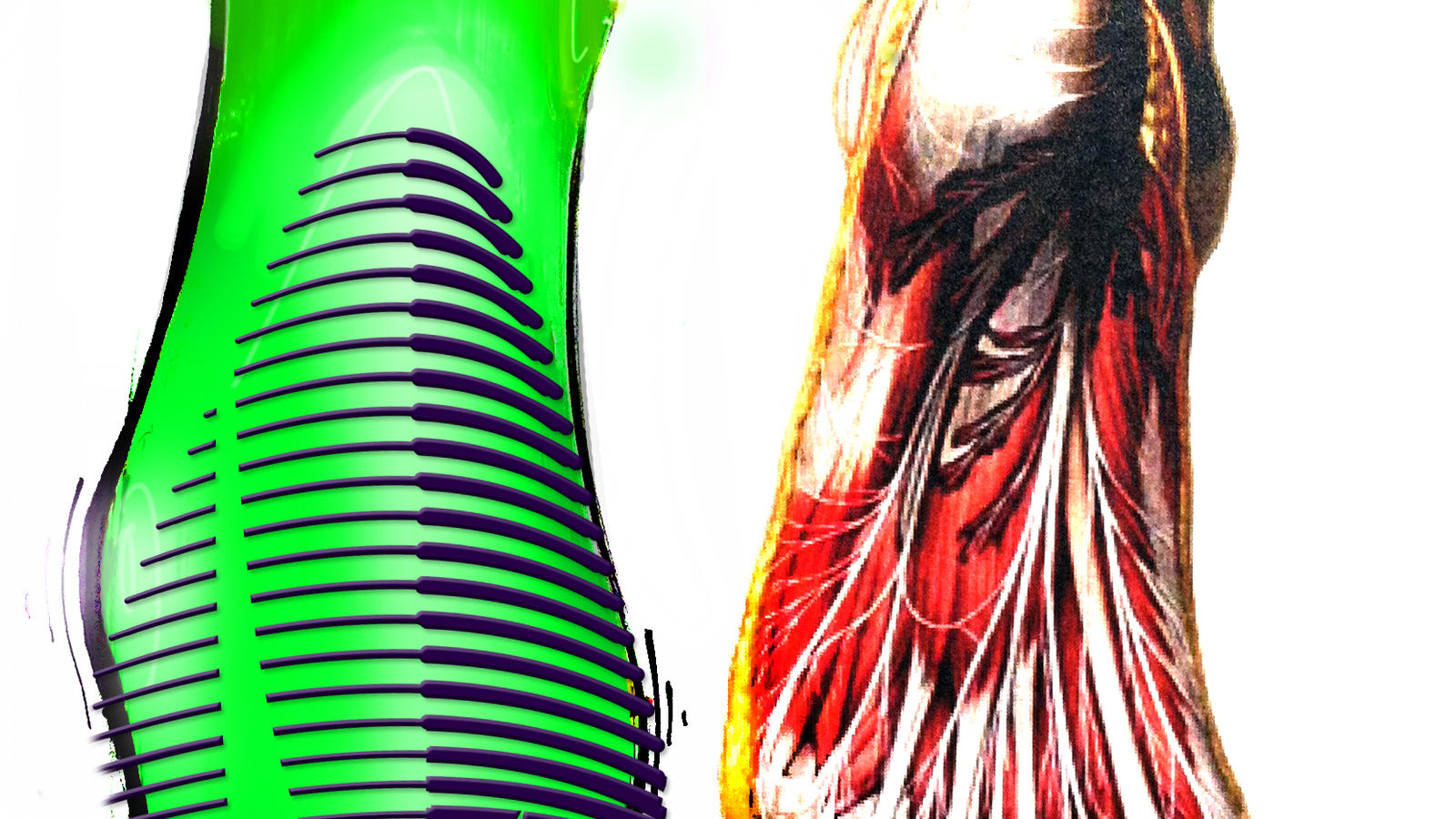 Nike also successfully engineered a single-layer chassis for the new Mercurial sole plate.  Football plates traditionally have many overlapping layers of material, but Nike utilized a new vacuum forming process to hollow out the plate. The new Mercurial soleplate is 40% lighter than the carbon fiber plate it replaces, yet it is stronger and more responsive. “Carbon fiber set a high bar,” says Lee, “but we were determined to deliver something even better and after two years of research and testing, we did.”

The next element of speed Nike tackled was the counterintuitive one: braking. “Having the confidence to stop on a dime is a critical component of speed,” clarifies Lee. “If players don’t know for certain they can quickly come to a full stop as needed, they slow down as a precaution, just as you would when driving a car.”

To develop a better braking system for the Mercurial, Nike’s design team tested different variations of cleats, blades, chevrons and other shapes in a variety of traction patterns. For the first time, Nike Football leveraged virtual Finite Element Analysis (FEA) testing, which provided scientific data to identify which traction pattern worked best for the speed-focused player, inclusive of linear sprints. The FEA data points were then tested on-pitch by elite Nike players to ensure the formula matched with reality.  “The data-informed pattern we landed upon acts like claws when accelerating,” says Lee, “but has the surface needed to brake quickly. The studs all are the same shape but positioned in different directions — straight on with the heel for braking, angled in the forefoot for propulsion. We also have traction in what used to be an empty space in the forefoot, which will provide a noticeable difference to players.” 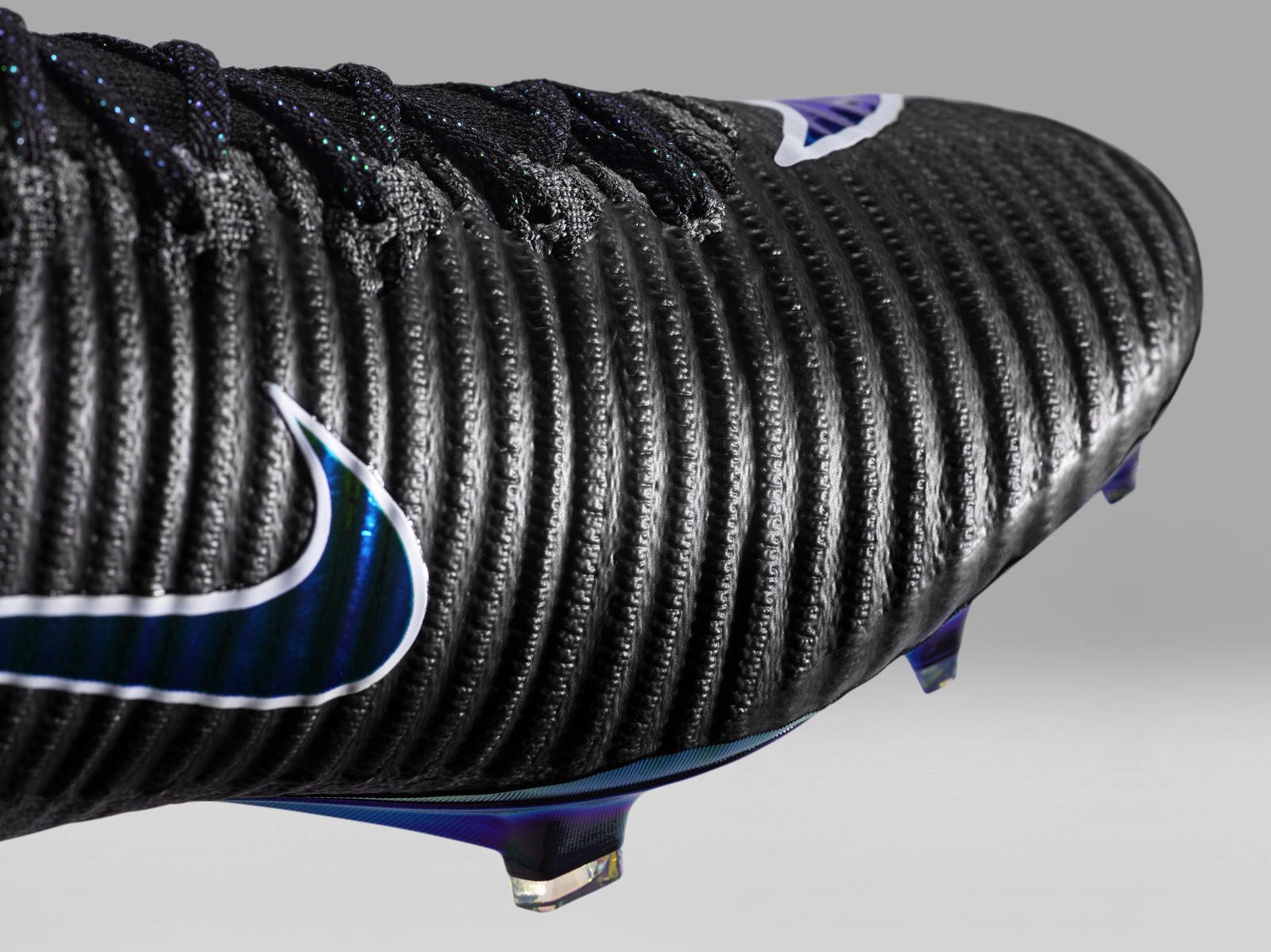 The player synonymous with Mercurial, Cristiano Ronaldo, had the following reaction to the new plate and traction configuration:

“It’s like my attitude,” Ronaldo declares. “I’m a straightforward and aggressive player. The stud shape reminds me of my character and performs very well on the pitch.”

Speed and style of play also influenced the Nike Flyknit upper, which was designed to enhance the interaction between the boot and ball at high speeds. For the first time, Nike leveraged data-informed texture mapping to create a Flyknit “speed rib” 3D texture. The raised surfaces provide friction between the upper and ball. “Previously, the Mercurial had a uniform surface on the upper,” says Lee. “We analyzed how speed-orientated players tend to dribble with the lateral side as they sprint, switching to the instep of the medial side for shooting, and adjusted the speed ribs accordingly.”

The speed ribs have a base thickness of 1 millimeter, increasing to 2.5 millimeters in the forefoot. In motion, the speed ribs also provide a bit of a color shift. “Mercurial players have never been shy about their boots,” notes Lee, “and the way we can play with color on this upper definitely attracts the eye and further enhances Mercurial’s reputation for style.”

“The new Mercurial marks a significant advancement in this boot’s proud history,” concludes Lee. “It’s lighter, stronger, backed by science and built to work with the foot for speed in all conditions."