Icons are made in moments — the bigger and more magical, the better. Without a moment to confirm their greatness, a footballer is just another professional plying a trade, and a boot is just a component affixed to their foot. The truly iconic is cemented when a player and his shoe join to create a scene so special that future generations of footballers study clips of it as though it were holy text and sculptors model statues of it. 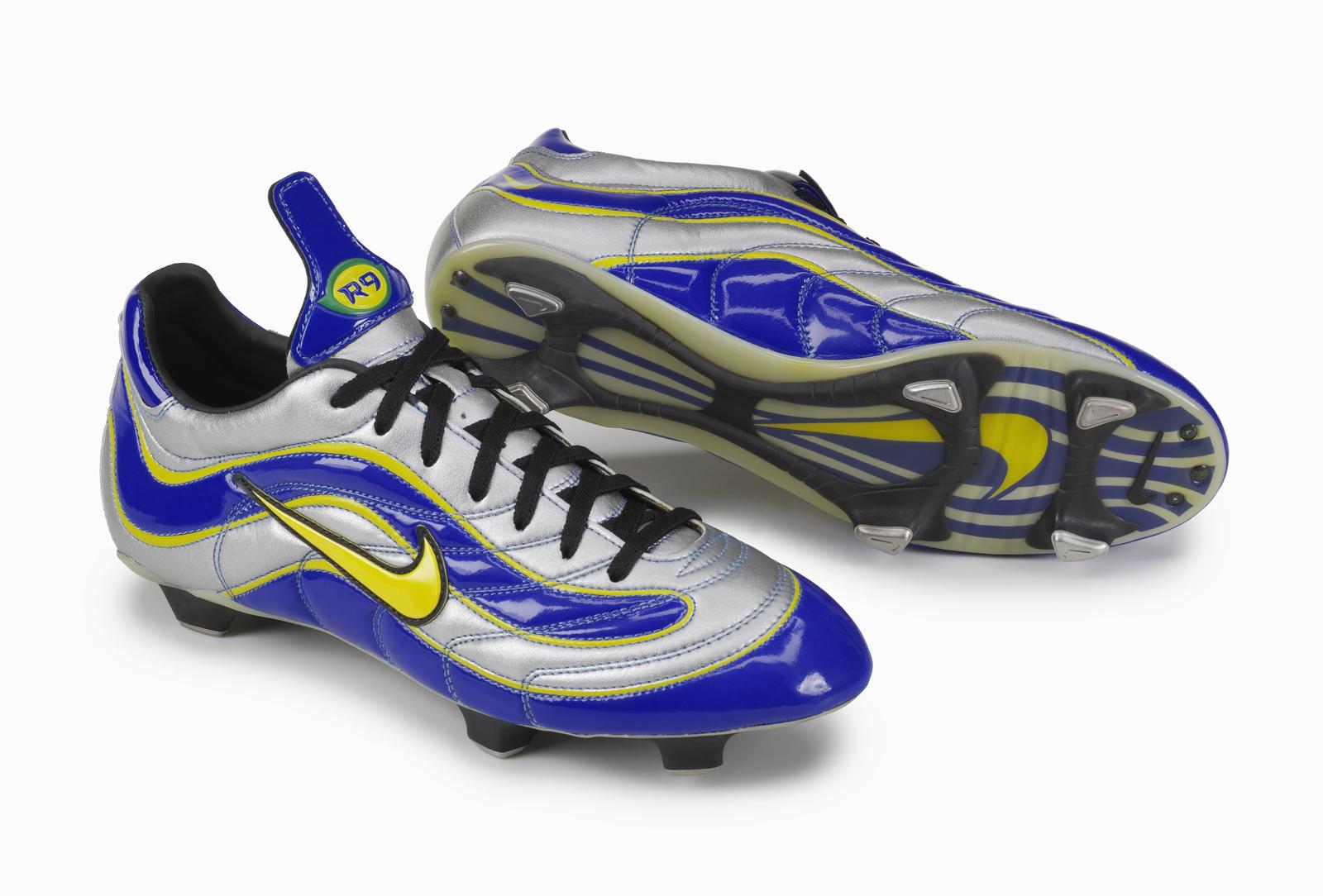 Ronaldo's boots — the first Mercurial — signaled the begining of a series of events in which player and shoe join to create history.

Designed for explosive speed, the high-performance Nike Mercurial boot debuted in 1998 on the feet of legendary Brasilian forward Ronaldo in France for the game’s biggest international tournament. Since R9 struck the first-ever tournament goal scored in Mercurials — in Nantes on June 16, finding space behind a Moroccan defense to send a screamer into the net on a half-volley and open scoring in a 3-0 drubbing — the game’s brightest attacking stars have chosen the boot and worked wonders, raising the bar for greatness while stockpiling silverware. In 2006, for his part, Ronaldo further secured his place in history by setting the quadrennial competition’s then goal-scoring record with an astounding tally of 15.

June 16, 1998: Ronaldo (R9) scores the first-ever goal in the Nike Mercurial by way of a screaming half-volley.

A Goal So Good It Gets Its Own Award

He was not the only Ronaldo to blow minds in Mercurials, of course. On April 15, 2009, during his Manchester side’s European club campaign, Portuguese striker Cristiano Ronaldo made quick work of one of his country’s most prominent clubs in the sixth minute, gathering both the ball and himself with two touches before letting loose a long-range cannonball that shot across the entirety of the final third, across the goal and into the side netting, which, miraculously, did not burst on contact. For his outrageous match-winning effort CR7 claimed the first annual FIFA Puskás Award for the most beautiful goal of 2009.

April 15, 2009: Cristiano Ronaldo (CR7) lets loose a long-range cannonball that was so impressive it earned the first-ever award for the most beautiful goal of the year.

Relocated from England to Spain’s capital that same year, Ronaldo and his Mercurials continued to make their case as the greatest of all time — in European club competition and anywhere. After dropping jaws from a distance, two of CR7’s most defining moments came from the penalty spot, where he makes net-minders look like sloths. On May 24, 2014, while cameras flashed in Lisbon for the all-Spanish final versus his crosstown Madrid rivals, Ronaldo capped a victory that became a runaway in extra time by drawing and finishing a penalty with a laser beam that thoroughly fooled the keeper diving the opposite direction and delivered his side La Decima its historic tenth title. Two years later, in Milan on May 28, against the same bitter rivals, Ronaldo added a record-extending eleventh cup to the trophy case. In a more vital spot, he coolly secured the title as the climactic penalty taker in a shootout, once again sending the keeper the wrong way as his shot ripped through the night before he ripped off his white shirt.

A New Legend is Born

The two Ronaldos became household names in Mercurial, but they are not alone. In 2011, the Mercurial took center stage on the fleet feet of teenage Brazilian sensation Neymar. On July 27 in Santos, Brazil, against the interstellar Ronaldinho in one of the domestic league’s most unforgettable contests, the frosted and spiky-haired wunderkind received the ball on the sideline. From there, he danced with it, pulling back and tapping it through and around six hapless defenders with a single one-two from his teammate as he worked his way toward the center of pitch and into the penalty area, spinning one opponent around and splitting two defenders, softly chipping the keeper while being taken down. This was what is meant when people say the “beautiful game” — and fittingly, the goal was named the season’s most gorgeous strike.

The stunning golazo put Neymar on the international map and set the stage for his budding superstardom.

July 27, 2011: Neymar exhibits the beautiful game with a stunning run that is named the season's most gorgeous goal.

One Goal. One Nation. One Team.

Drama be damned. Midfielder Carli Lloyd and her Mercurials didn’t wait long to release the national tension and ensure sweet revenge on July 5, 2015, when she and the United States met Japan in Vancouver for a rematch of the previous tournament’s final, which Japan won on penalties. This time, there would be no doubt or need for PKs — Lloyd effectively settled the contest inside of 16 minutes with a startling hat-trick capped by a looping shot from midfield that caught the keeper out of position.

July 5, 2015: Carli Lloyd scores a looping shot from midfield, catching the keeper out of position.

Sixteen years after Brandi Chastain’s iconic shirt-stripping celebration at the Rose Bowl in Pasadena, California, the USWNT finally hoisted its third, record-setting trophy, returning the team to the pinnacle of the women’s game.

For more than two decades, the Nike Mercurial has played a part in all manner of iconic moments around the globe. They were on Clint Dempsey’s feet when he secured an improbable 2-0 upset of world-beaters Spain for the USMNT in cup play on June 24, 2009, in Bloemfontein, South Africa. Eden Hazard wore his on May 2, 2016, while curling home a late equalizer as a donation toward Jamie Vardy and his Cinderella side improbably captured the 2015-2016 English Premiership. Alexis Sanchez put his to cheeky good use with the panenka that won Chile the South American national tournament on July 4, 2015, in Santiago. And you already know what Christian Pulisic was wearing when he became the youngest foreigner to score in Germany’s prestigious top flight on April 17, 2016.

In the last decade in Europe during the world’s biggest showcase national tournaments, 110 goals were scored in the iconic boot — 35 of them in Europe’s signature cup in 2016 alone, making it the top-scoring boot of the competition. Just last season, in Europe’s top leagues, more than 1,000 goals were scored in Mercurials. And with each glorious moment, another footballer is inspired to lace up a pair of Mercurials and go for goal, dreaming of one becoming iconic.