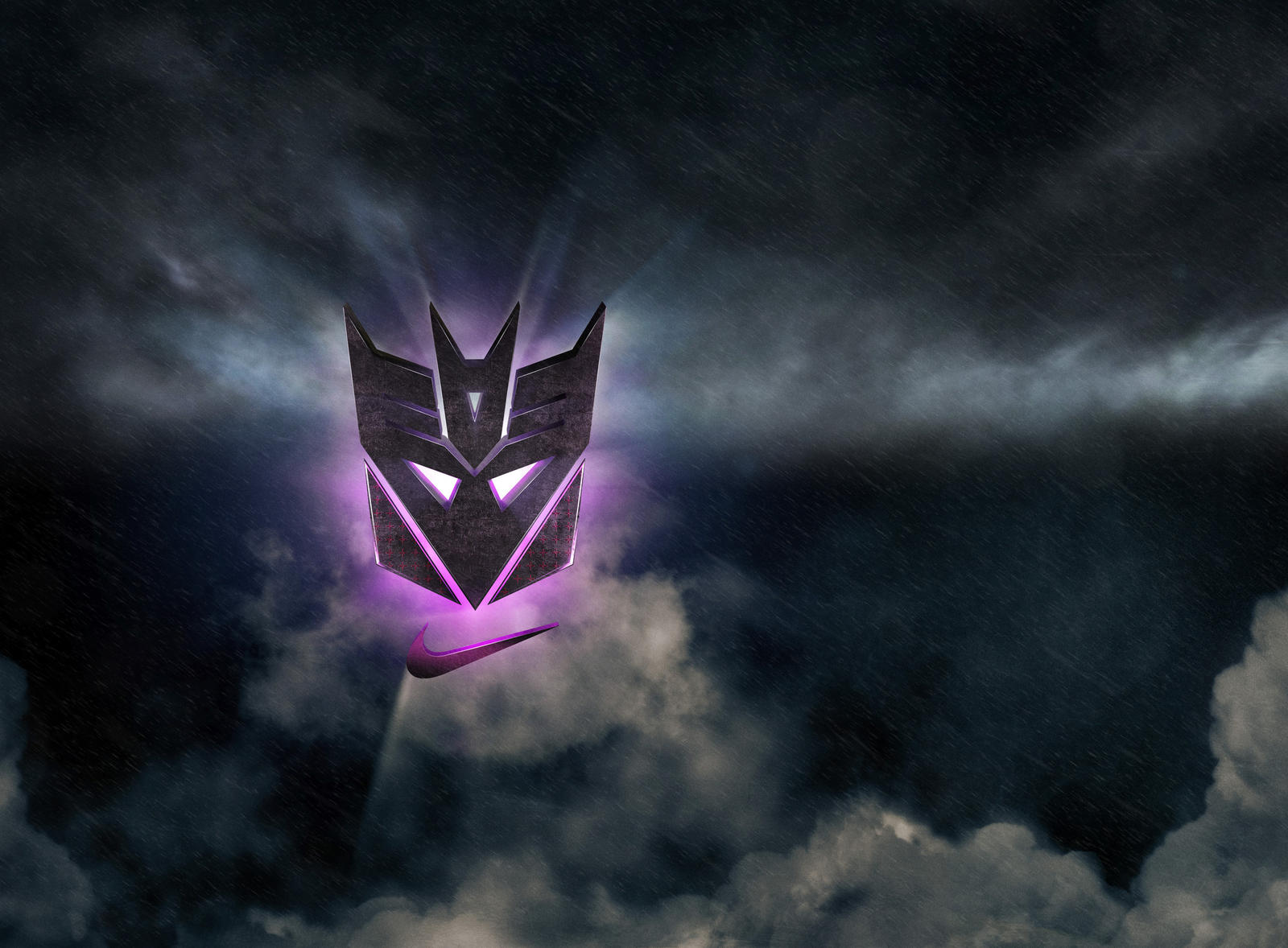 Calvin Johnson, Jr. has redefined the wide-receiver position and become an un-guardable force with a powerful nickname - MEGATRON. Like the fictional TRANSFORMERS DECEPTICON leader, Johnson taps into his superhuman-like skills to push the limits of his position, and the game, in a relentless quest for dominance.

Designed to amplify Johnson’s powerhouse athletic ability when training in the gym and on the turf, the Nike CJ81 Megatron Trainer Max features adaptive traction, lockdown support, and Max Air cushioning. In true MEGATRON form, all core attributes of the shoe are energized in a design that marries Johnson’s on-field persona with his human side. 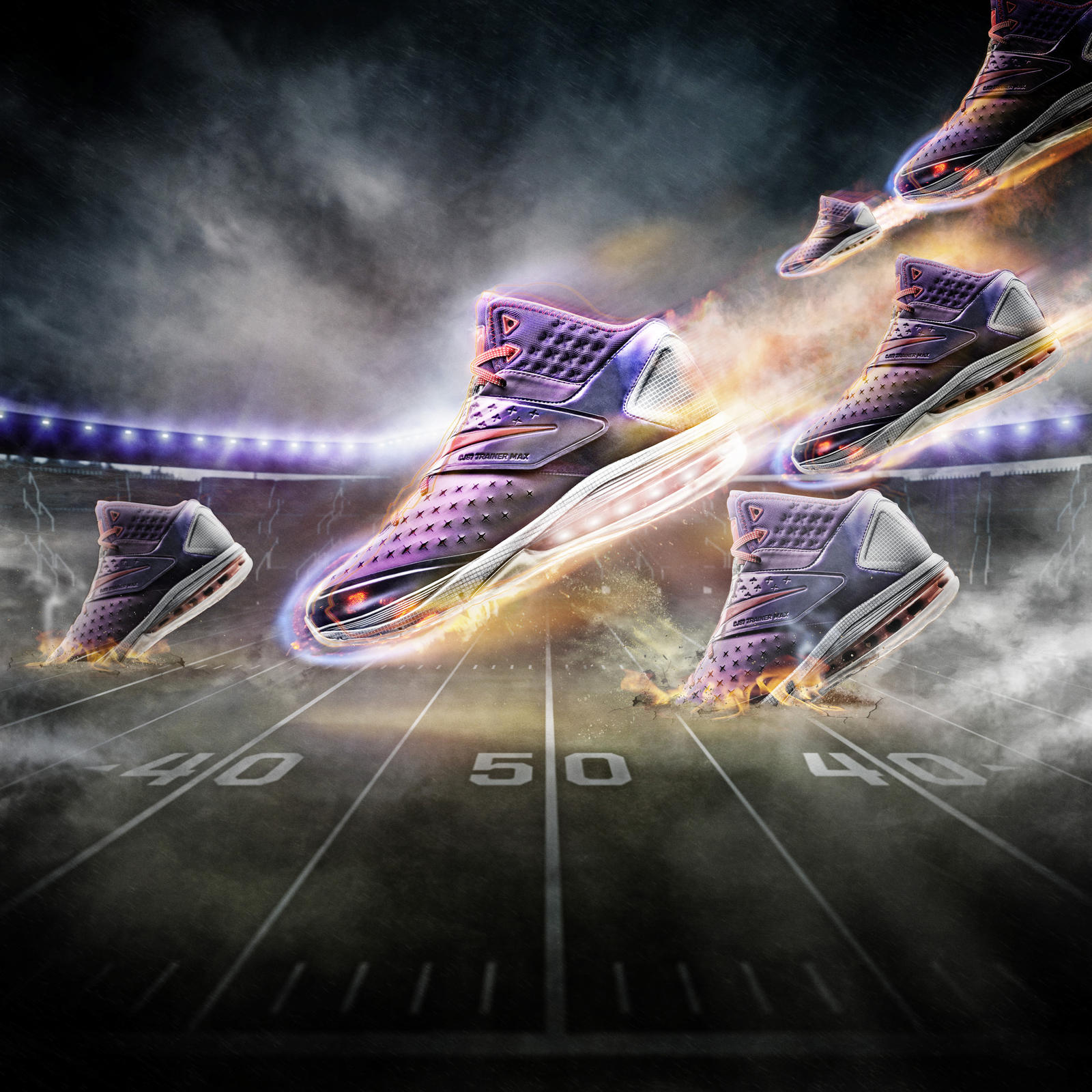 The Nike CJ81 Megatron Trainer’s purple upper gives the shoe a robotic, armored look, while the red accents refer back to the secondary color of the action figure. Under the forefoot strap, Johnson’s favorite MEGATRON quote, “Show no mercy,” appears. It’s a reminder of the athletic mindset needed to succeed at the highest level, and the perseverance required to rise to the top. The metallic silver heel of the trainer carries a classic TRANSFORMERS grid pattern as well as a bold, iconic DECEPTICON logo at center. 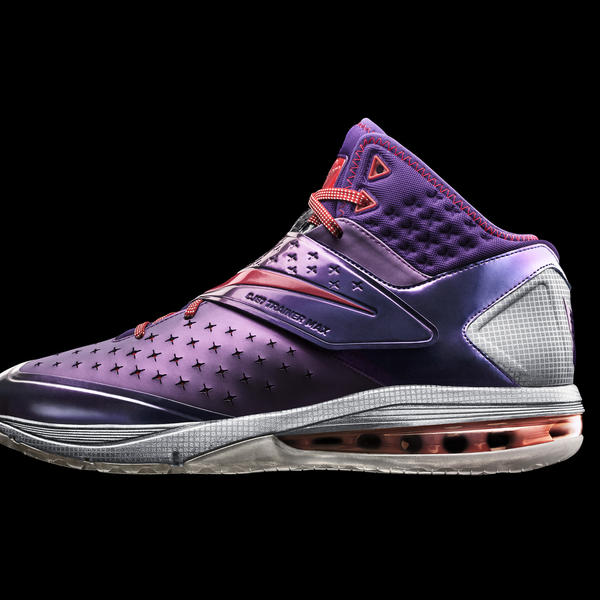 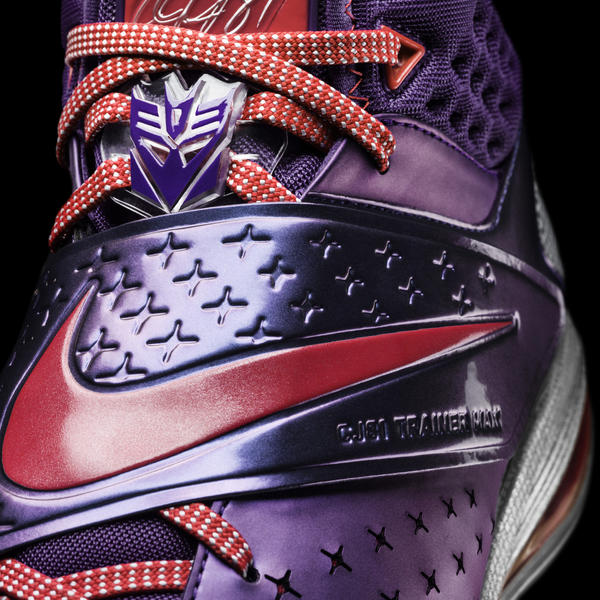 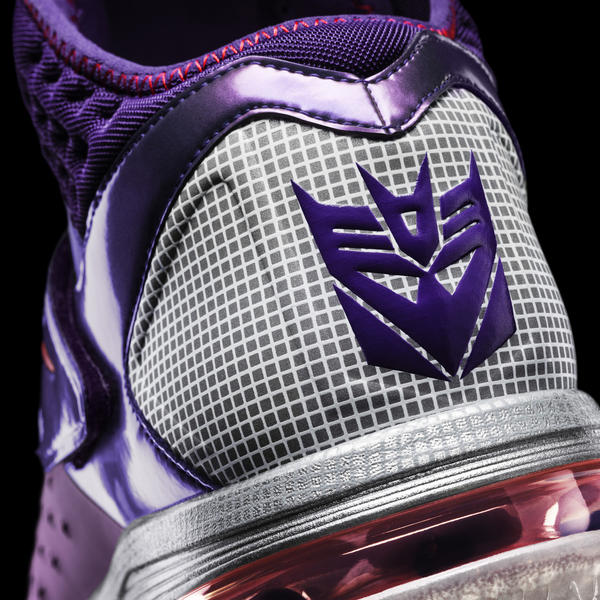 Produced in collaboration with Hasbro, the 5-inch purple and red TRANSFORMERS MEGATRON action figure inspired by Calvin Johnson mirrors the cues of his signature Nike CJ81 Megatron Trainer Max. The distinctive red cruciform pattern found on the toebox and upper of the trainer are utilized on the arms and feet of the figure. Johnson’s signature appears alongside the iconic DECEPTICON shield on MEGATRON’S chest. In robot mode, the MEGATRON figure is designed to be broad yet agile, and the iconic “wing” jet conversion is meant to mirror Johnson’s speed and power. 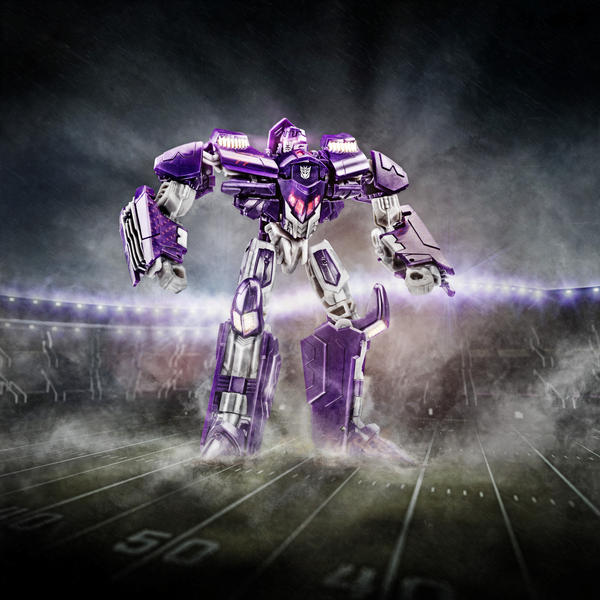 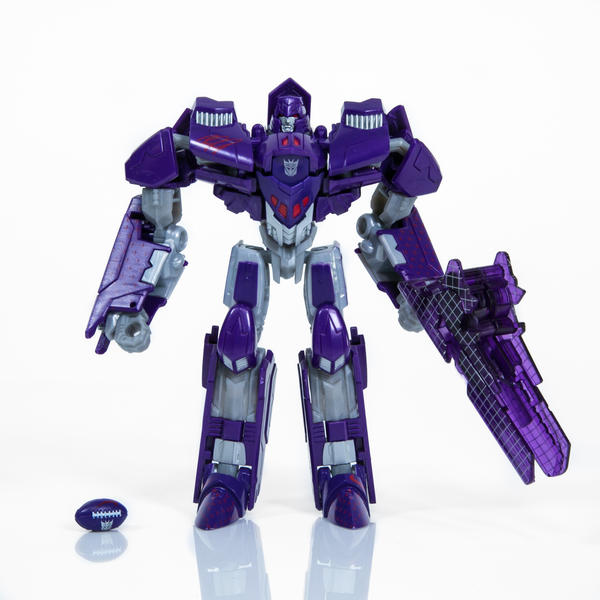 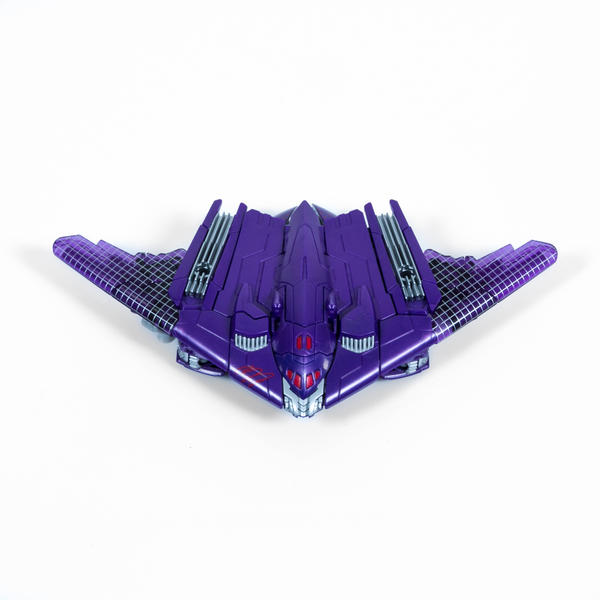 Complementing the Nike CJ81 Megatron Trainer Max, the Megatron Nike Air Trainer SC II draws more muted inspiration from the TRANSFORMERS character. A tonal, reflective circuitry board pattern is featured on the medial and lateral quarter panels, and like the Nike CJ81 Megatron Trainer Max, the DECEPTICON logo appears welded at the heel. Premium Nubuck is used at the overlays, and a glow-in-the-dark outrigger punctuates the sole tooling. The final TRANSFORMERS inspired flourish is a removable strap across the upper. 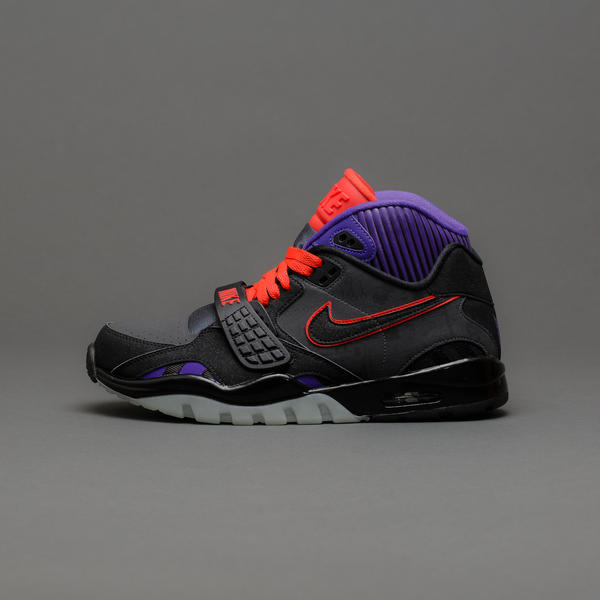 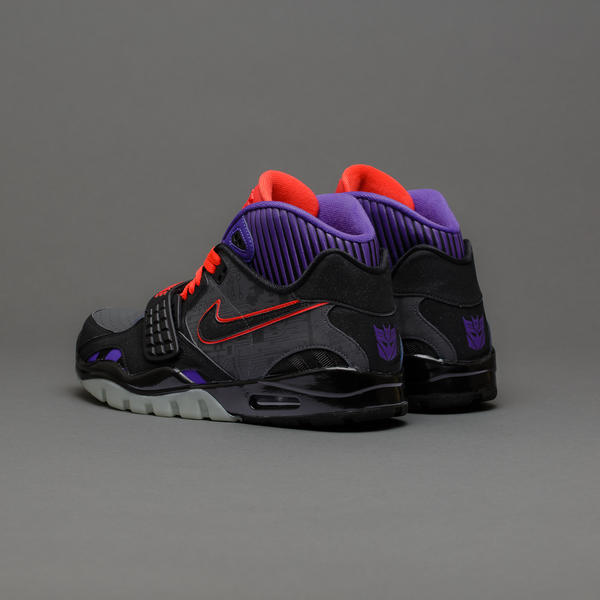 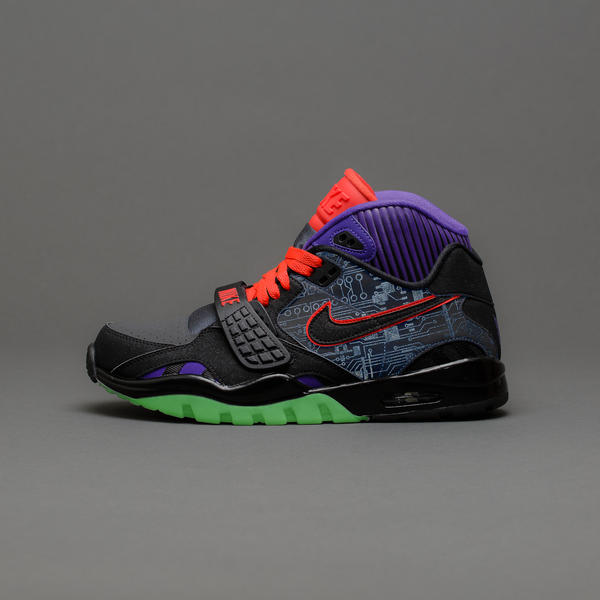 In further celebration of Johnson’s athletic achievements, the limited edition Megatron Rises 3-Pack incorporates the Nike CJ81 Megatron Trainer Max, the Megatron Nike Air Trainer SC II, and a special edition Nike CJ81 Megatron Elite TD Cleat.  Inspired by the ALLSPARK from TRANSFORMERS lore, the box of the Megatron Rises 3-Pack is a unique, converting cube-shaped design. Decorated entirely with original artwork, the lines of the box mimic robotic surfaces and are augmented by triangles, hash marks, x’s, and o’s in reference to the football field and offensive passing plays. The effect is, like Calvin Johnson, “More Than Meets The Eye” - a package that opens to reveal all three shoes and the Hasbro action figure. 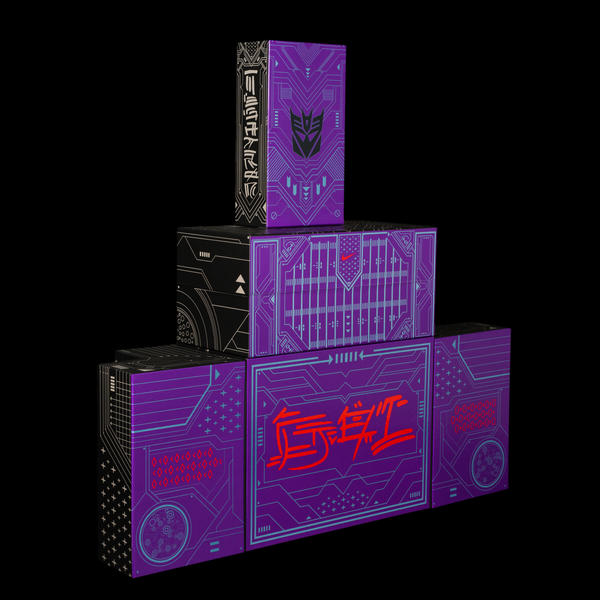 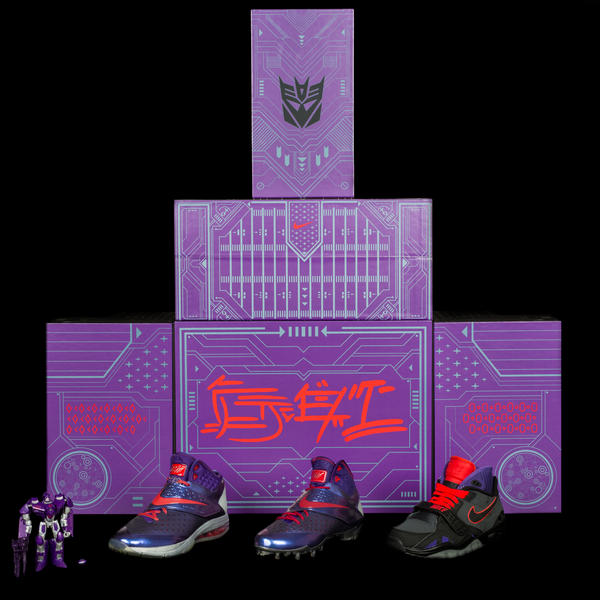 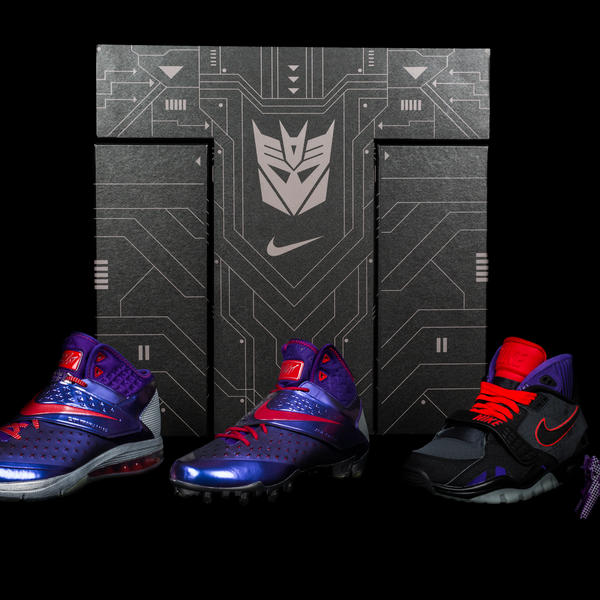 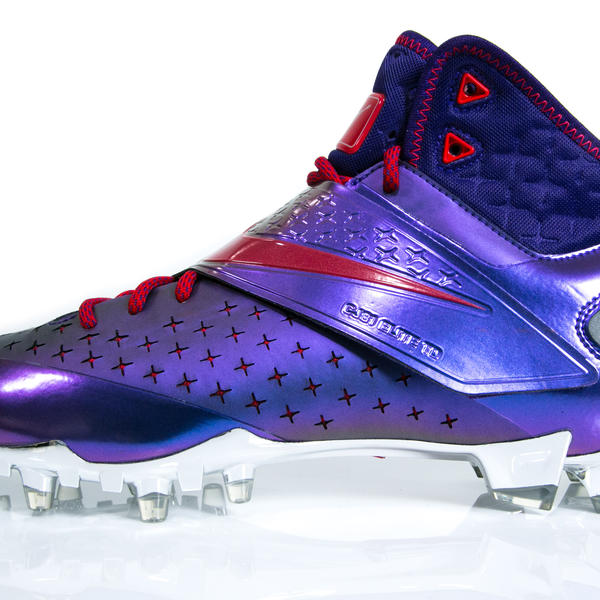 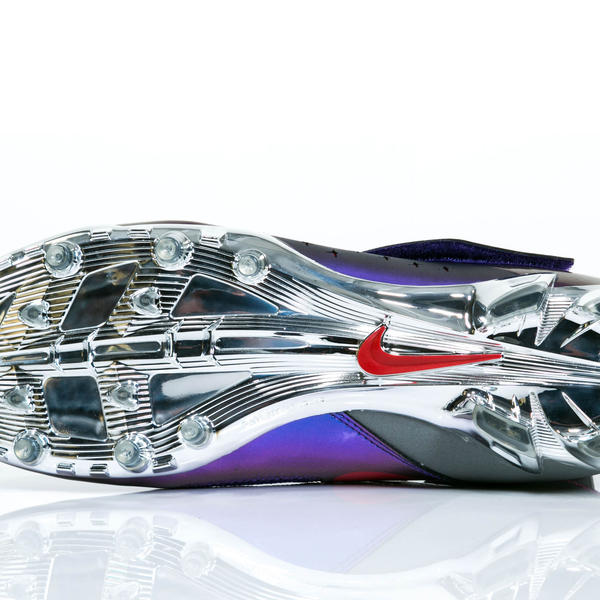 In honor of Johnson’s number, 81 Megatron Rises Packs will release exclusively at 21 Mercer in NYC, select Nike Yardline doors, and Nike.com. The CJ81 Megatron Trainer Max and the Megatron Nike Air Trainer SC II will be available at select Nike retail locations and online at nike.com.

MEGATRON is a trademark of Hasbro and is used with permission.  © 2013 Hasbro.   All Rights Reserved.  Licensed by Hasbro.